Fr Arsanius Wadid, a Coptic priest who was born in 1966 and ordained a priest in 1995, lost his life on the evening of 7 April 2022 when he was dealt a deadly stab in the neck by a bearded man on the street in Alexandria. The stabbing occurred on Alexandria’s main thoroughfare, the beachfront Corniche, in the east Alexandria district of Sidi Bishr. The attacker was 60-year-old Nehru Abdel-Moneim Tawfiq, commonly referred to as Nehru.

Fr Arsanius had been accompanying a group of some 35 young men and women from his church, the church of the Holy Virgin and Mar-Boulos (St Paul) in Karmouz, for a day of leisure and spiritual activity at the beach. As the day drew to a close, the group gathered to board microbuses and head back to their church at around 8pm, a bearded man attacked the priest and stabbed him. Fr Arsanius was directly moved to hospital where he breathed his last. The stabber, who was initially described by a number of eyewitnesses as uttering loud incoherent phrases and making strange gestures, was caught by the passers by and handed to the police who quickly arrived at the scene.

In a statement, Pope Tawadros mourned Fr Arsanius who died childless and leaves behind his wife, Tassoni [‘Tassoni’ is Coptic for ‘Sister’] Martha Marcos. In his statement, the Pope describes Fr Arsanius as a “virtuous priest and active Church servant who was faithful to his Church and enjoyed good relations with everyone, Muslims and Copts, young and old. 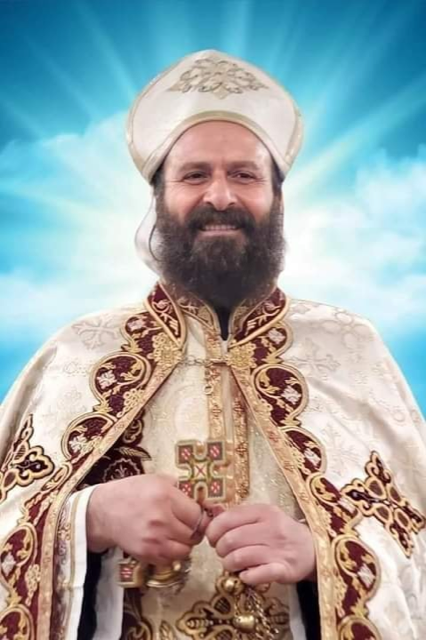 “With great pain we bid him farewell as we raise our eyes to heaven, asking our Lord to console his virtuous wife and blessed parents, also his congregation, loved ones and spiritual children. We bid him farewell in these holy days of Lent; he will celebrate the glorious Resurrection with Christ the Risen, and will be praying and interceding for us in heaven.”

On the Coptic Media Centre page, the Coptic Church posted a statement mourning Fr Arsanius  as “a blessed father who dedicated his whole life to God, as a faithful witness to Him … ‘If we live, we live to the Lord; if we die, we die to the Lord; whether we live or die, we are the Lord’s”.

The funeral service for Fr Arsanius was held 8 April at Alexandria’s St Mark’s Cathedral. Presiding over the service were the general bishops Anba Hermina of central and eastern Alexandria; Anba Pavli of Montazah; and Anba Illarion of western Alexandria; and Fr Abra’am Emil, deputy-general of the Coptic Orthodox Patriarchate in Alexandria. 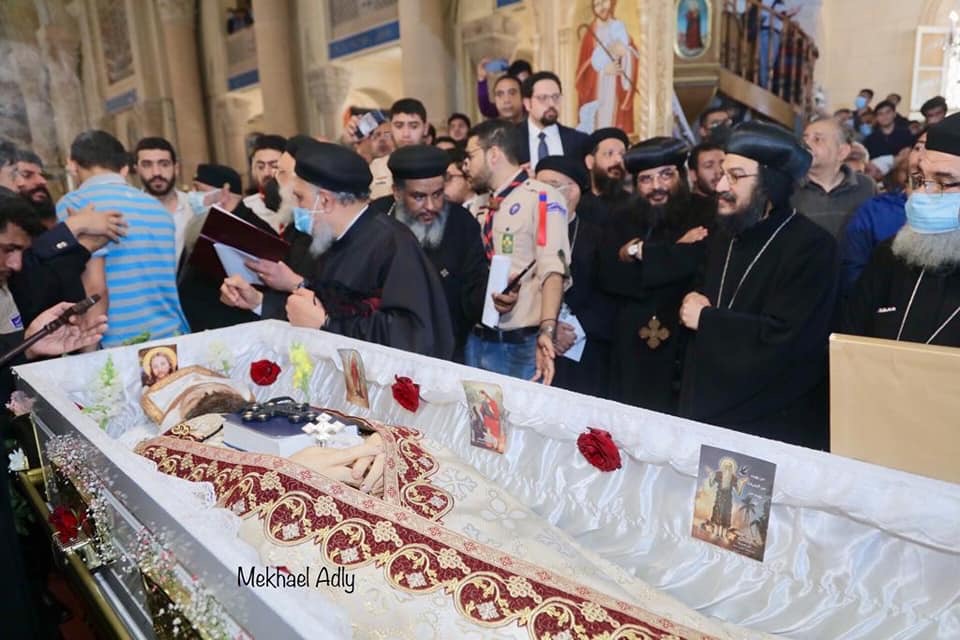 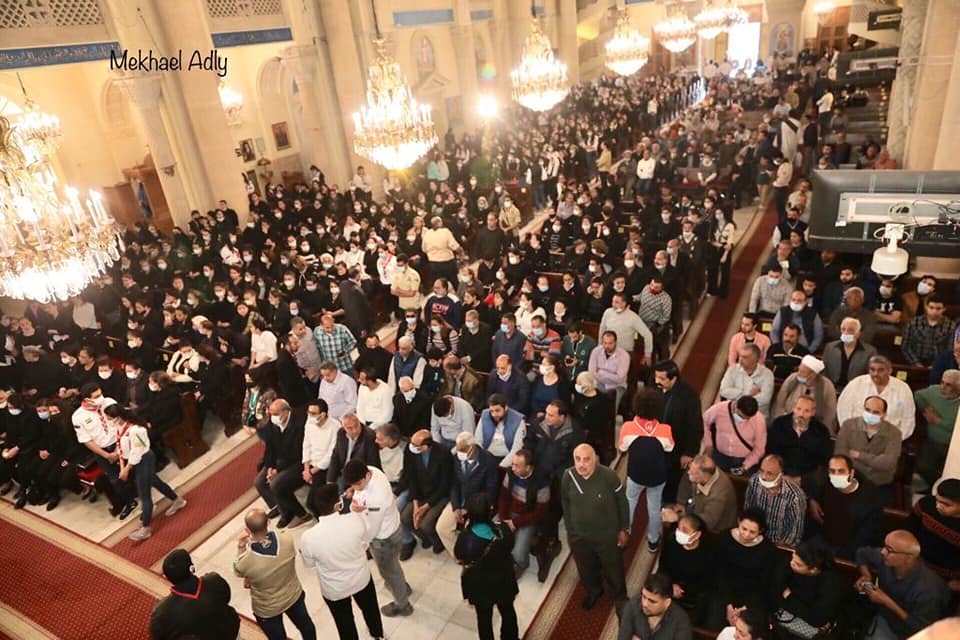 Fr Arsanius was then buried in the collective grave of Alexandria’s martyrs of 2000 and 2017, at the monastery of Mar-Mina, some 70km southwest Alexandria. 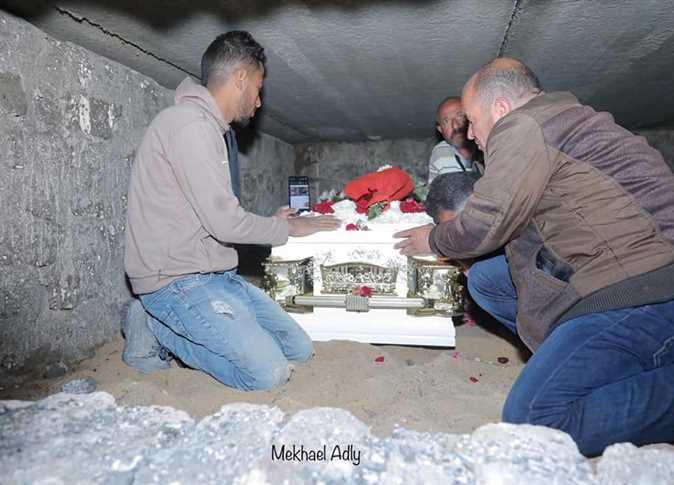 As statements of condolences poured from all Christian sects in Egypt as well as public figures, Islamic senior figures vocally condemned the crime. Al-Azhar Grand Iman Sheikh Ahmad Al-Tayyeb said that killing a human soul no matter of what faith is a major sin; whereas Sheikh Abbas Shuman, his deputy, wrote: “What a difference between a priest in Sohag who offers Ramadan meals to Muslims, and the treacherous hand that murdered Fr Arsanius in Alexandria.”

Official investigations into the murder Fr Arsanius Wadid are ongoing.

The general prosecution revealed that it had questioned 17 eyewitnesses who included staff and workers on the beach, and members of the group who had been with the priest. It had also inspected the scene of the crime, checked the surveillance cameras in the vicinity, received the after-death report from the forensic medicine authority, and ordered that the defendant be tested for any drugs he might have taken.

The eyewitnesses all confirmed that the priest had been with a group of young people at the beach and that, right before the crime, he was standing on the pavement checking that they all rode the microbuses that would take them back. The surveillance cameras showed the scene, with the defendant approaching as he carried a plastic bag. The witnesses said that he sneaked behind the priest, wielded a knife, and stabbed him in the neck. He tried to stab again but was overpowered by those present, who caught him, seized his knife, and handed him to the police. A number of the witnesses recognised the defendant as the stabber. The after death report revealed the cause of death of Fr Arsanius to be a stab in the neck.

The drug test showed that the defendant was free of any traces of drugs.

The prosecution questioned the defendant, Mr Nehru who was born in Dairout in the region of Assiut some 350km south of Cairo, but had left to other regions in Egypt in search of work.

Mr Nehru at first orally admitted his crime, but later went back and said he had gone to Alexandria a few days earlier in search for work after having gone to several regions without success. He said he slept on the streets, and found the knife in a garbage heap so kept it to use for self-defence. He claimed that on the day of the crime he saw the priest, but that he remembered nothing till those around caught him. 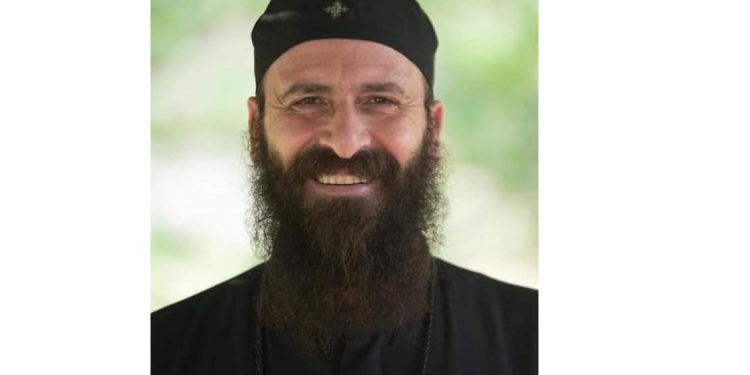 The prosecution said that, during the questioning, the defendant listened normally and replied coherently. He was asked about his social life, his university education, and the books he read. However, following his going back on his first acknowledgement of committing the crime, he claimed he had undergone psychological disturbances some ten years ago, which led to hospitalisation, and that he sometimes has no control over his deeds. Upon which the prosecution ordered him to be held in custody pending investigations, and had a court order issued to place him under medical observation in a public mental hospital to assess his mental status, and to determine if he suffered from any illness that might lead him to unwittingly commit the crime he did.

The prosecution is currently carrying investigations that involve questioning the defendant’s family and relatives.

Under the title “Father forgive them for they know not what they do”, Watani’s Editor-in-Chief Youssef Sidhom wrote:

“This is not the first year that the Divine allows Egypt and her Church to undergo a painful situation that puts to test the patriotism, coherence, and faith of Egyptians. Sadly, this occurs as we prepare to complete Lent and celebrate Holy Week and the Resurrection, and as Muslims prepare for Eid Al-Fitr once Ramadan is completed.

“It was God’s will that the venerable Fr Arsanius Wadid, priest of the church of the Holy Virgin and St Paul the Apostle in Karmouz, Alexandria, should be martyred by a deadly stab wielded by a lost soul who has been arrested and is under investigation. 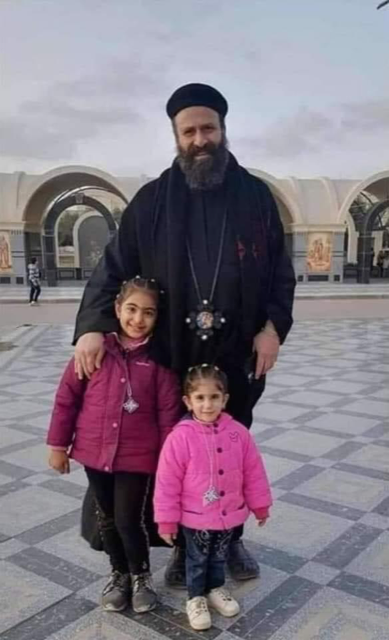 “I have no doubt whatsoever that God, who allowed this painful event as He had allowed others during similar times of the year, is able to overflow His comfort and peace over the family of Fr Arsanius, the congregation of his church, and the entire Coptic congregation. Again, I have no doubt that Egypt’s Muslim officials and people feel with our pain and loss.

“The statements issued by Al-Azhar’s Grand Imam Sheikh Tayyeb and Pope Tawadros have been cause for comfort, given that they help absorb the wrath experienced by those pained by the incident.

“As for me, the only words I can say are those uttered by Jesus the Lord on the Cross: ‘Father forgive them for they know not what they do’.”

Obviously, however, Mr Sidhom was among the few Copts who dared swim against the tide. The Coptic public have displaced harsh outrage on social media, at what they claimed was a hate crime caused by extremist thought. They vocally called for battling the [Islamic] extremist thought that breeds such crimes. Yet it must be owned that the Egyptian government has been fiercely battling such thought the proponents of which base on the Qur’an.

Copts expressed deep seated wariness lest the killer be pronounced mentally deranged and thus not responsible for his deeds.

A Cairo daily, the independent al-Masry al-Youm, investigated Mr Nehru’s claim of mental illness and previous hospitalisation, and claimed that he was a known extremist that had indeed been admitted to the mental hospital in Abassiya, Cairo, in 2007 and was later discharged. When CTV, an independent Coptic satellite channel hosted Yusri al-Badry, Chief Editor of al-Masry al-Youm to talk about the details of his papers’ work on the matter, Coptic response was livid. The Copts’ comments unanimously blamed CTV for airing such material, taking it to indicate there was reason to claim Mr Nehru was mentally deranged, an allegation they absolutely rejected. Yet the mental hospital had not yet issued its report on the defendant. Until Watani went to press there was no news on that eagerly awaited report; any update will be posted on our website https://en.wataninet.com/ 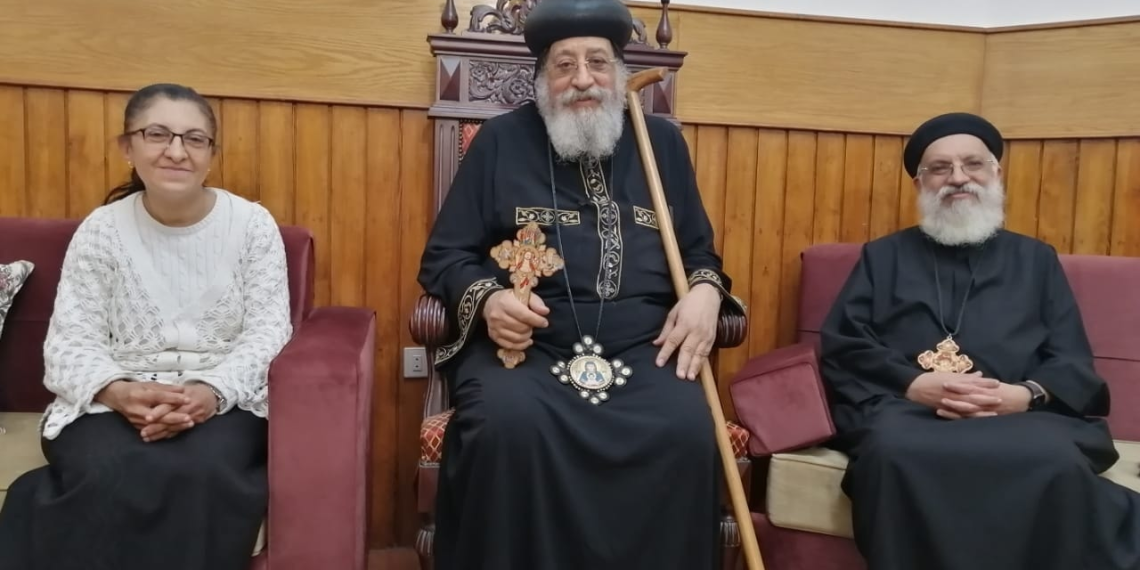 Pope: “You are a blessed woman”

On 11 April, Pope Tawadros received Tassoni Martha and a number of Fr Arsanius’s relatives. He again offered his heartfelt condolences, and spoke to them of the mission of Christians on earth, and the joy that awaits them in Heaven.

The Pope listened to Tassoni Martha talk about the life of Fr Arsanius and his ministry. “You are a blessed woman” he told her.