Golden Jubilee of Beheira Diocese and its Metropolitan

Metropolitan Pachomius: “No better than living a servant to all”

At one point in the modern history of the Coptic Orthodox Church, a long-reigning widely loved and revered Pope passed away, leaving the congregation feeling orphaned and broken hearted. According to Church law, the most senior bishop, who was also beloved of the Coptic congregation and highly revered, should have taken on the role of acting patriarch, but his ailing health stood in the way. The second in seniority thus took over; he was not too well known outside his diocese, but proved to be of singular stature spiritually and practically. He led the Church with absolute wisdom, love and prayer through a very difficult time of adverse political conditions till a new patriarch was chosen through an altar draw among three elected candidates. 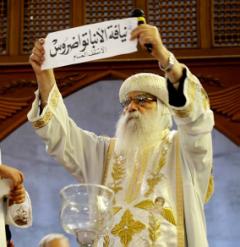 As Heaven would have it, the altar draw brought a new patriarch who was none other than a disciple of the Acting Patriarch; he had served under him as a young Church servant till he took orders and was later consecrated Bishop-General, after which he again served with the older bishop, by then a Metropolitan. At the enthronement ceremony, a very moving moment came when the old Acting Patriarch placed the throne on the head of his disciple, saying: “You served under my care, now I serve at your feet.” The Coptic congregation believed the new Pope was God’s answer to their fervent prayers; he serves with love, humbleness, and wisdom. 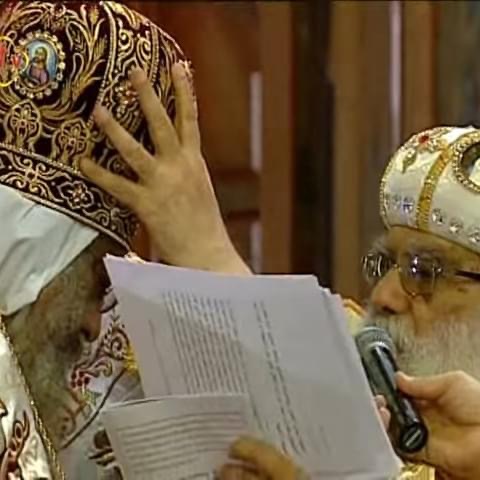 To put names to the story: the departed beloved patriarch was Pope Shenouda III who was Pope in 1971 to 2012, the 117th patriarch of the Coptic Church; the Acting Patriarch was Anba Pachomius, Metropolitan of Beheira, Matrouh, and Pentapolis [in present-day Libya]; and the new patriarch, the 118th in the Coptic Church, is the current Pope Tawadros II. Given that the Church defines its patriarchs by their sequence number in her history, and given that Anba Pachomius had gained the immeasurable love and esteem of the congregation for exceptionally carrying out the duties of Acting Patriarch, the Copts have labelled him the “Unnumbered Patriarch”. 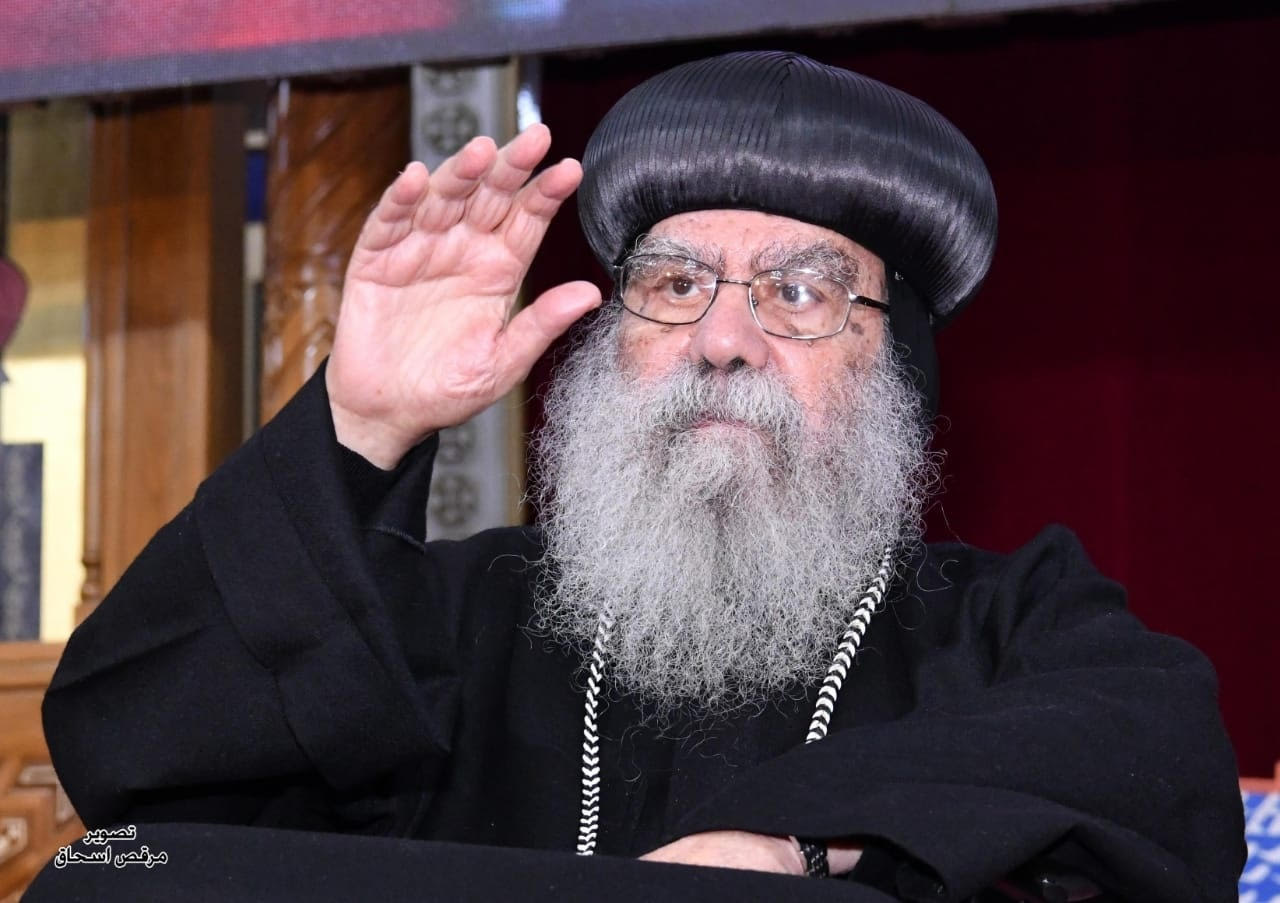 Last Sunday 12 December 2021 marked 50 years on the creation of the Coptic Orthodox Diocese of Beheira, Matrouh, and Pentapolis, known for short as the Diocese of Beheira; and the consecration of Anba Pachomius (born 1935, B.Sc Commerce 1956, took orders 1962) as its first bishop in 1971 at the hands of Pope Shenouda III. He was made Metropolitan in 1990. The diocese is one of the most widespread in Egypt; it covers Egypt’s northwest territory from the Nile Delta through the Western Desert, and extends into Libya. 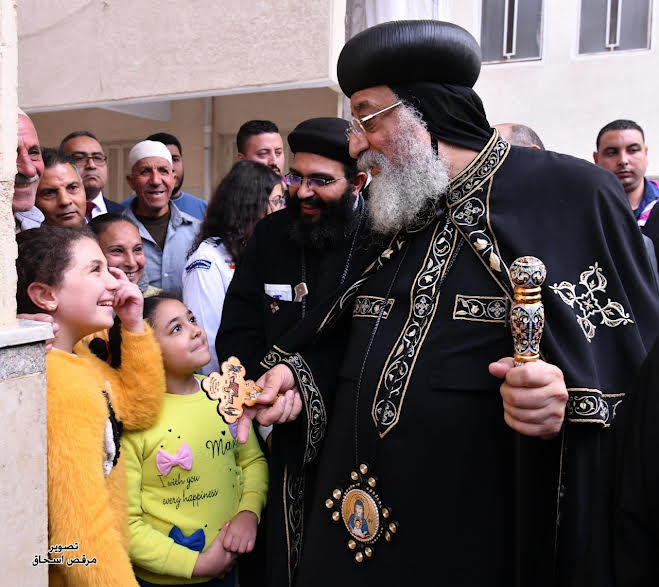 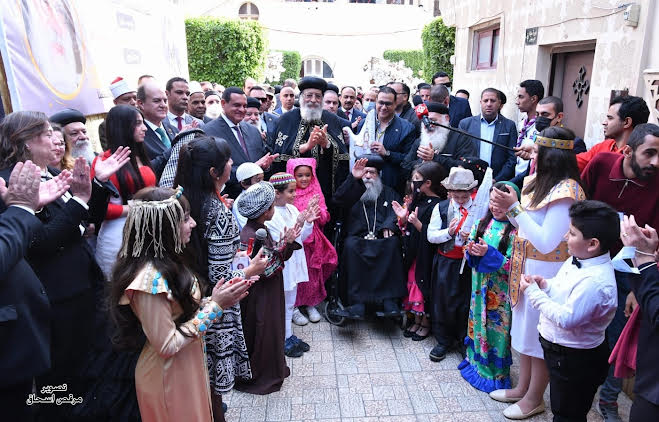 A large celebration was held on the afternoon of 12 December 2021 in Damanhour, the capital city of Beheira west of the Nile Delta, to honour the Jubilee of Beheira Diocese and of Anba Pachomius as its Metropolitan. Pope Tawadros was there to join in the celebration. The Pope had grown up in Damanhour till he went to Alexandria University where he earned a degree in Pharmacy in 1975, worked as a pharmacist, then left all to take orders in 1988. He was consecrated Bishop-General in 1997 and served in Beheira with Anba Pachomius till he became Pope in 2012.

Pope Tawadros was jubilantly welcomed at St Mark’s in Damanhour by the Church’s drummer band and banner carriers, and by an open armed Anba Pachomius. 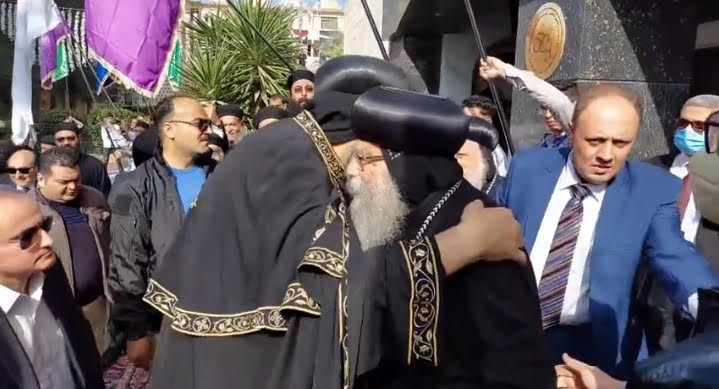 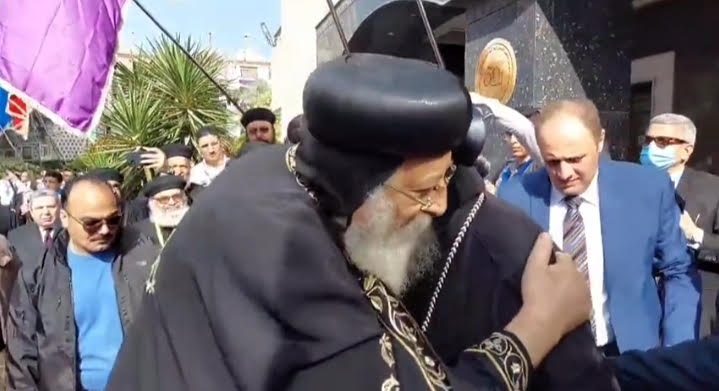 Participating in the celebration was Beheira Governor Hisham Amna, and a number of high ranking officials in the governorate. From the Church, a number of bishops attended, also the priest assembly of Beheira, and a large congregation. 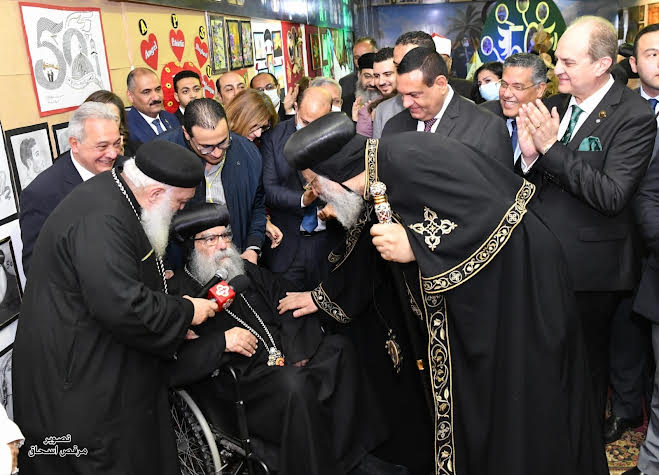 The Pope joined Anba Pachomius to open a photography exhibition that showcased the effort done and work achieved in Beheira, led by the Metropolitan, throughout the 50 year life of the Diocese. 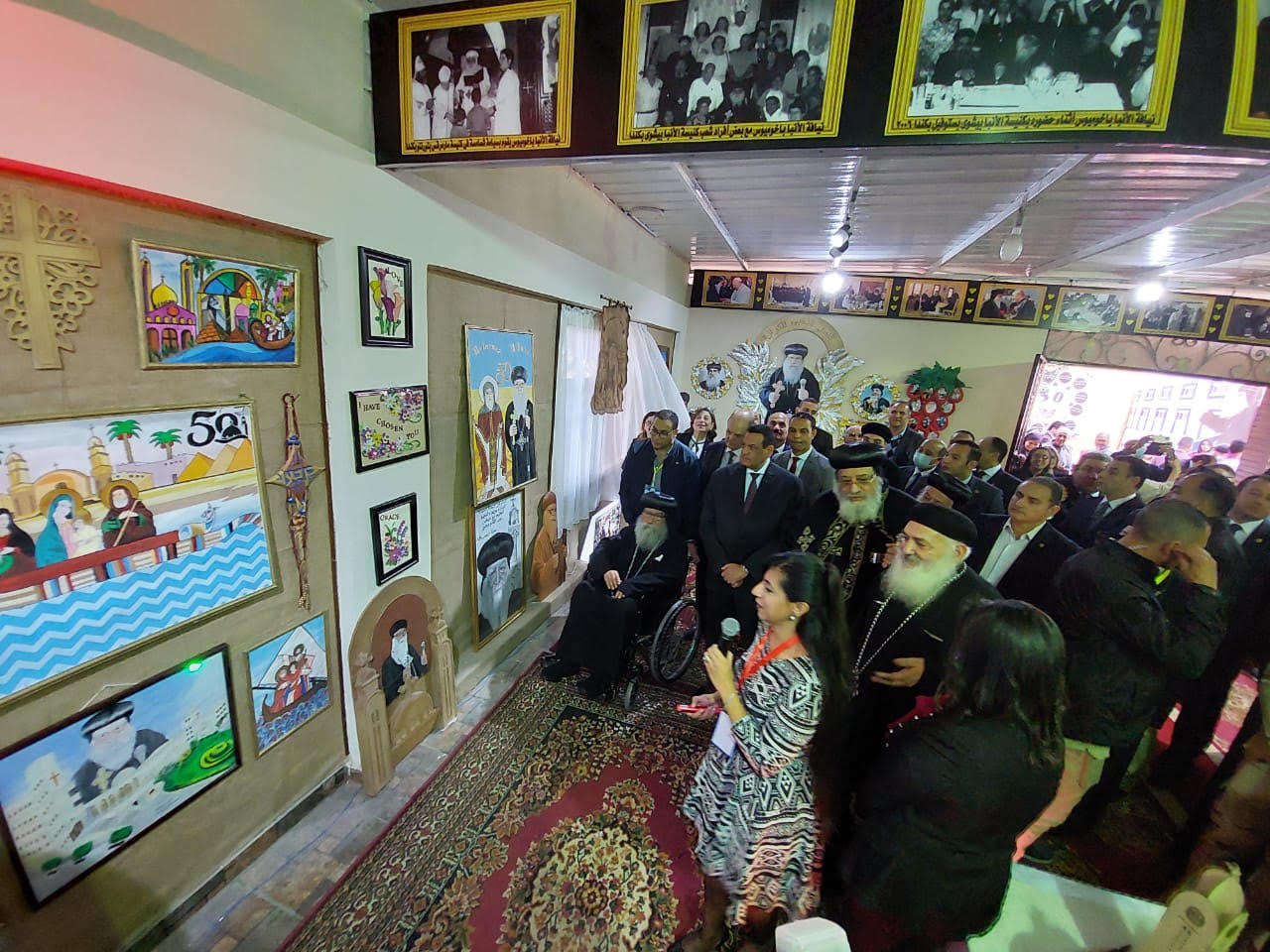 The Church Scouts performed sports and drumming shows, and the documentary “Metropolitan of gold” was screened. This was followed by a performance of hymns and praise, as well as songs in the love of Egypt, sung by the Church choir. 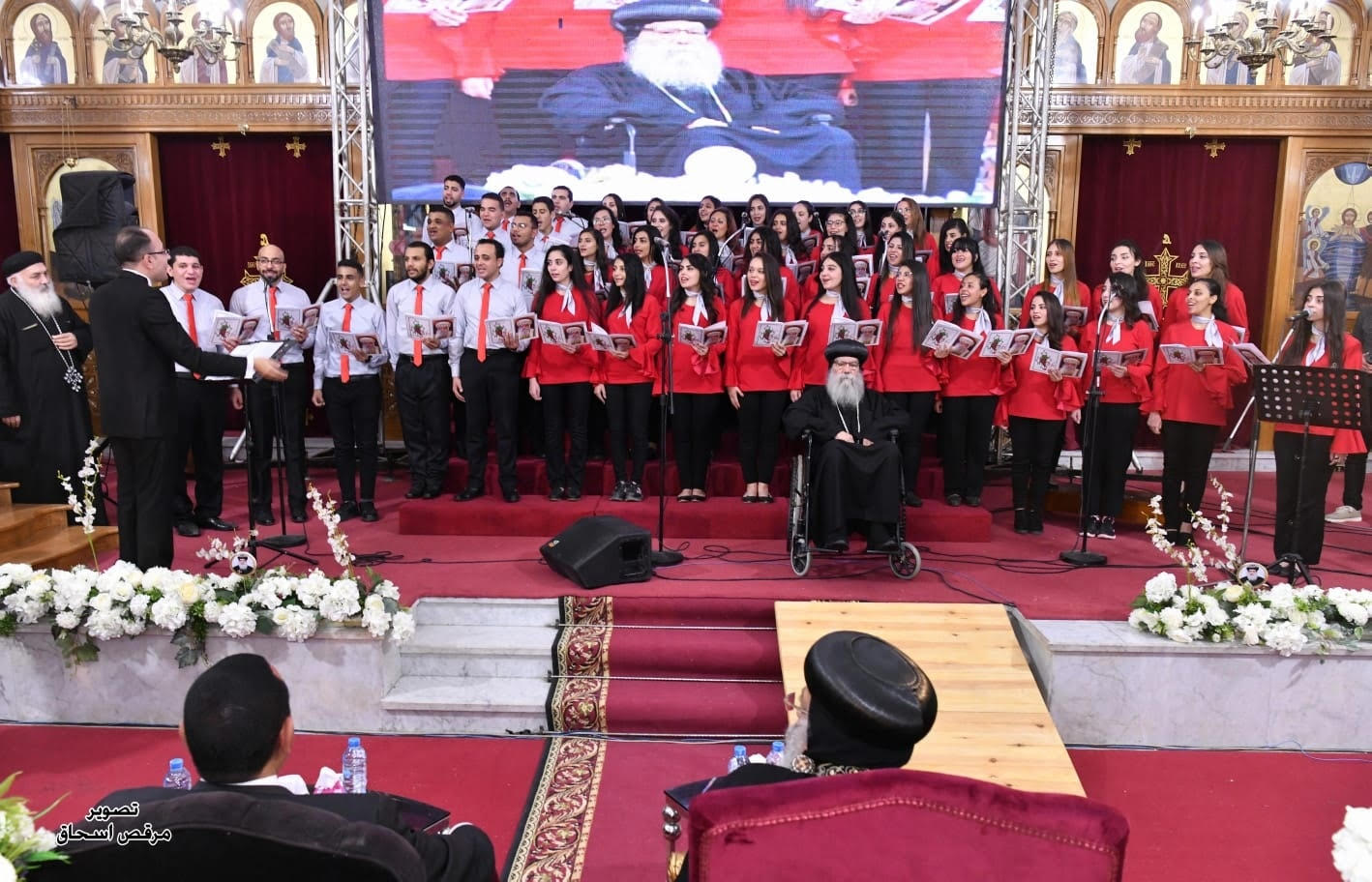 Pope Tawadros welcomed Beheira Governor and all the attendants, praising the work of the administration of President Sisi in the field of building churches and in development, especially as achieved in Beheira. He said that that evening’s event held a special flavour since it celebrated a special pastor, Anba Pachomius. “We thank God who sent Anba Pachomius to Beheira to serve it in spirit and truth; we gratefully honour his faithfulness to the Church and to Egypt. 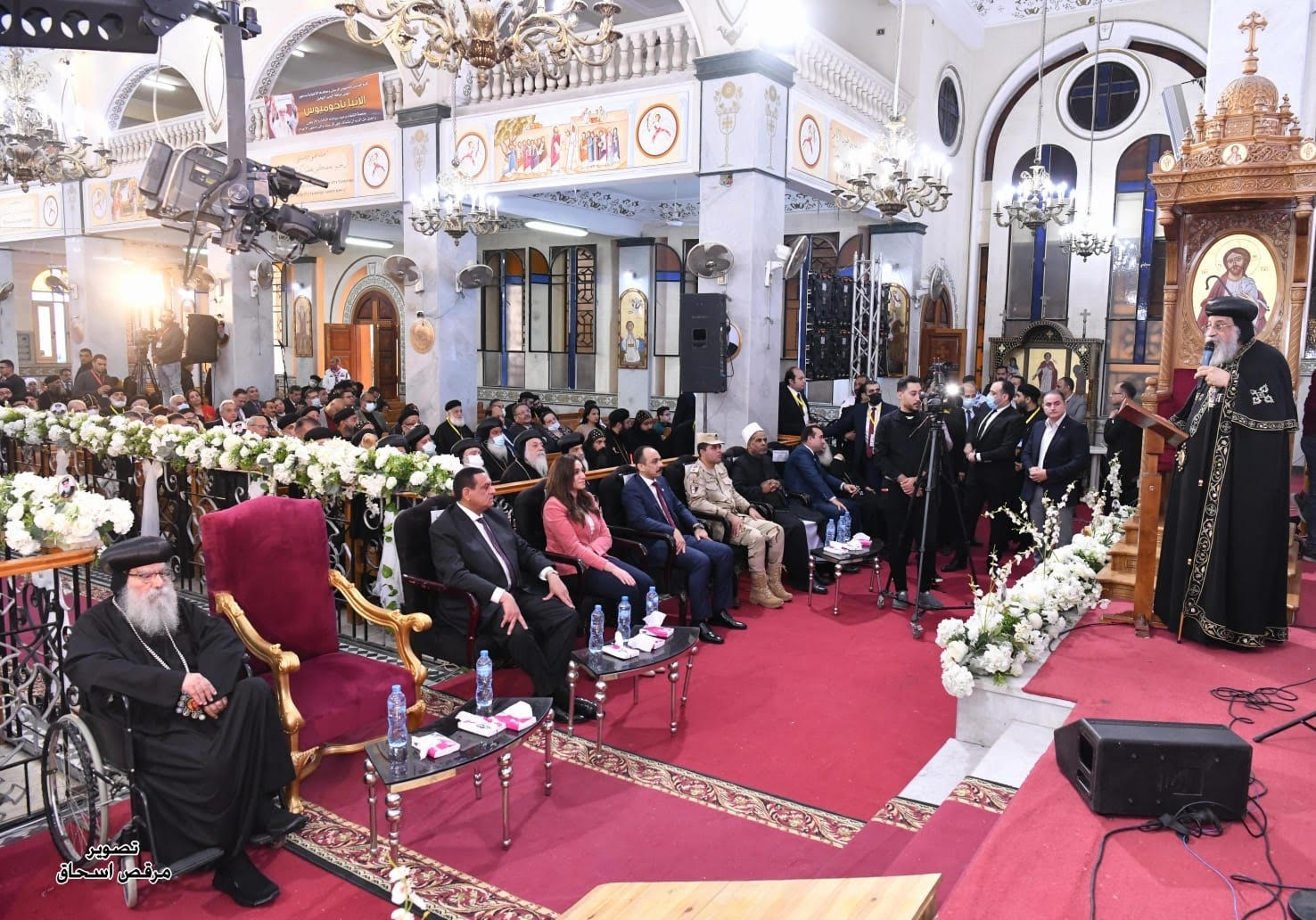 He is a great leader who does great work in silence … He served not only in Egypt, but in Kuwait and Sudan before he came to Beheira; everywhere he served he left warm memories of dedicated service, of wisdom and vision, and of love for everyone. Peacemaking has always been a top priority for him.”

50 years of love and wisdom

Governor Amna gave a warm hearted word which began with welcoming Pope Tawadros on behalf of all Beheiris. He described the Pope as belonging to a rare, superior rank of men who are naturally great yet spontaneously humble, who faithfully serve their people. “Neither we nor the world will ever forget your historic words [when in August 2014 Islamists burned and destroyed some 100 churches and Coptic institutions nationwide] ‘A homeland without churches is better than churches but no homeland’.” 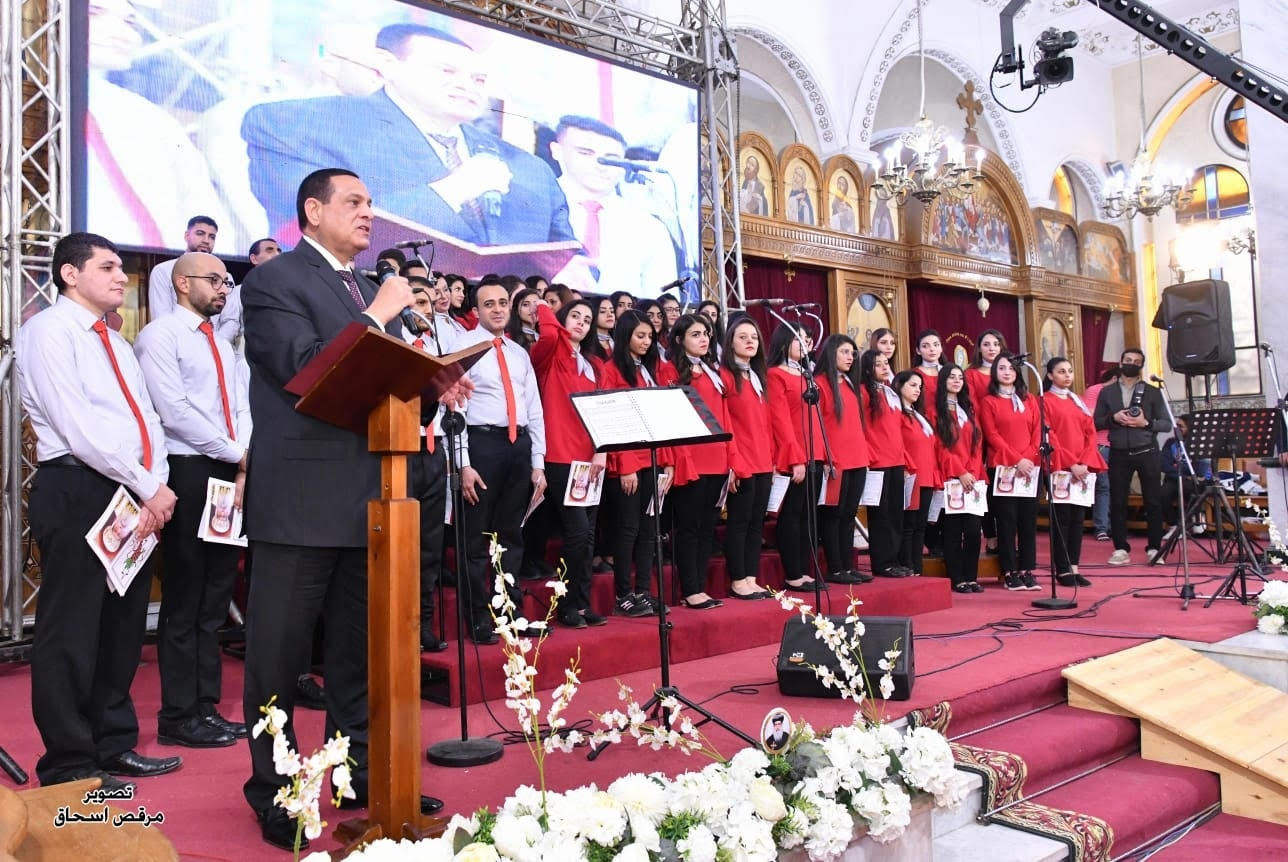 The Governor spoke of the Jubilee of Beheira Diocese and Anba Pachomius who led and served it, saying: “These have been 50 years that emanated love on the land of Beheira, inside and outside the Church. Anba Pachomius is truly a man and Metropolitan of gold, a religious symbol of tolerance, generosity, goodness, and giving. In addition, he possesses encyclopaedic knowledge of Coptic history and of enlightened humanistic thought and culture, traits which have attracted Muslims and Christians alike.”

Governor Amna reminded his audience of the difficult eight months in 2012 during which Anba Pachomius wisely and prudently steered the Church towards safety following the departure of Pope Shenouda and until he handed her over to Pope Tawadros safe and sound. “He is the proud father who humbly became son to his own son [Pope Tawadros] who is in turn a capable, enlightened leader.”

Finally, the Governor focused on the attitude stressed by President Sisi that Egypt is precious through her Christian and Muslim sons and daughters who stand hand in hand to build and develop, as fits the children of a great civilisation. Beheira, he said, is a beacon of peace, security, and growth thanks to the love that reigns supreme in the hearts of her Muslims and Christians.

Fr Theophilos Nessim spoke on behalf of Beheira’s priest assembly, welcoming the guests and stressing the teachings of love for the country and the Church, and applauding Anba Pachomius’s dedicated leadership of “one thought, one heart, and one spirit” till we reach safe shores. 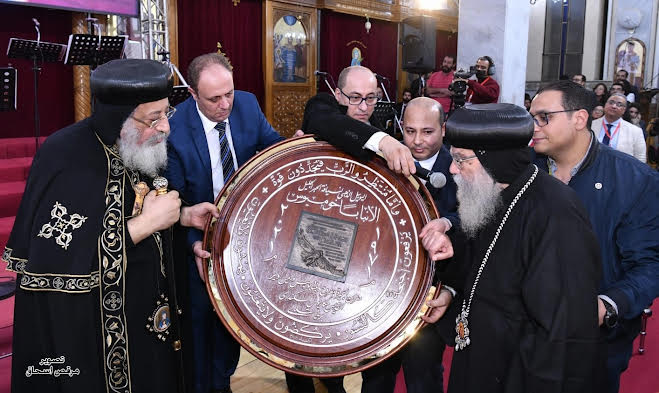 The Coptic Orthodox Holy Synod was represented by its Secretary-General Anba Danial, Bishop of Maadi, who congratulated Anba Pachomius on his and Beheira Diocese’s Jubilee. He hailed the Metropolitan’s famed wisdom and wide experience, saying that the Church benefits profoundly from them.

It was then the turn of Anba Pachomius to give his word. He started by thanking Pope Tawadros, Governor Amna, the Muslim and Christian clergy in attendance, and all the congregation, saying their presence gave him much joy. 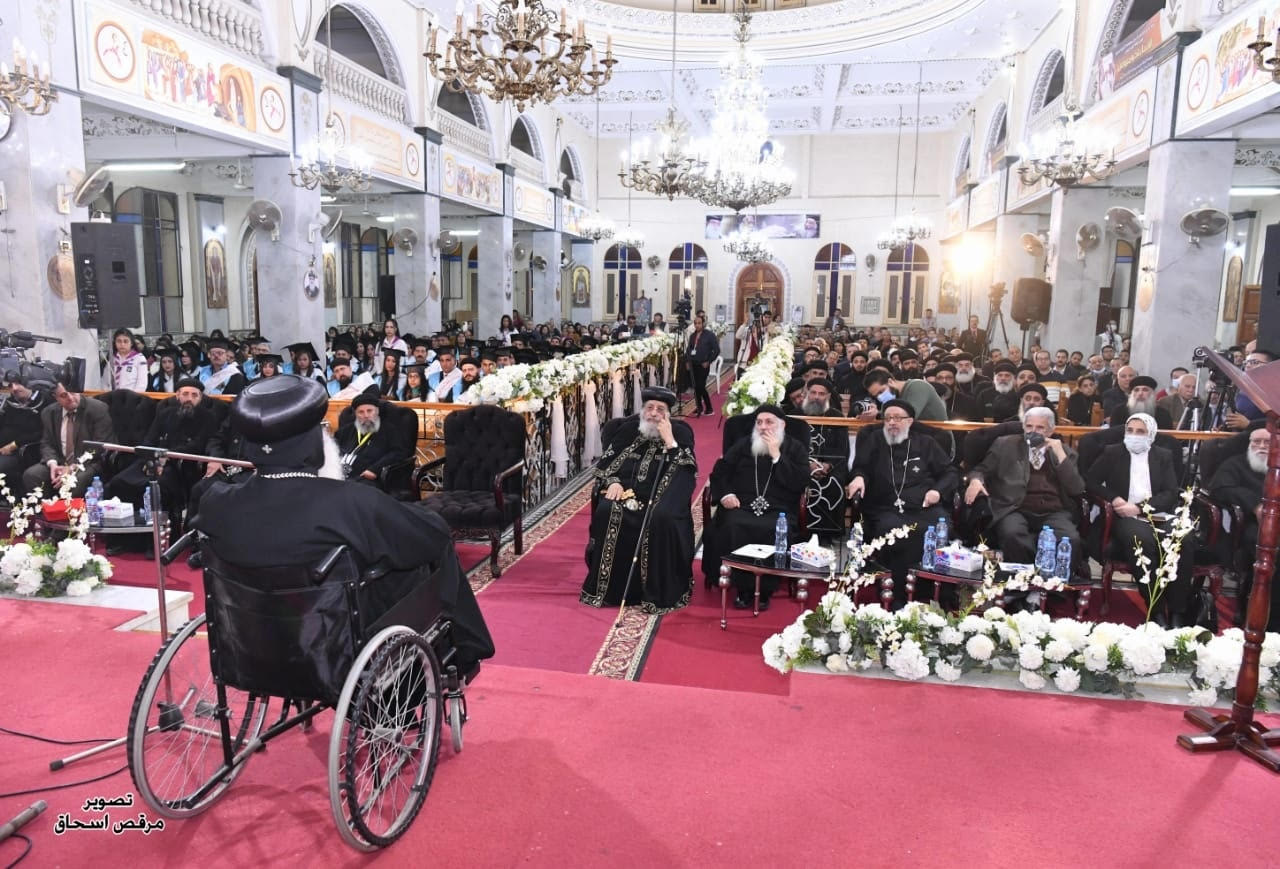 “What I did was no more than my duty to my country and Church,” he said. “How beautiful it is to live as a servant to others.”

The jubilee of Beheira Diocese, Anba Pachomius said, has brought us all together in love and joy, celebrating service to our homeland. He ended with thanks and prayers for President Sisi’s diligent efforts.

The celebration closed with Governor Amna presenting Pope Tawadros, whom he described as “one of the prominent symbols of Beheira”, and Anba Pachomius “a symbol of love and tolerance”, with the governorate’s shield. 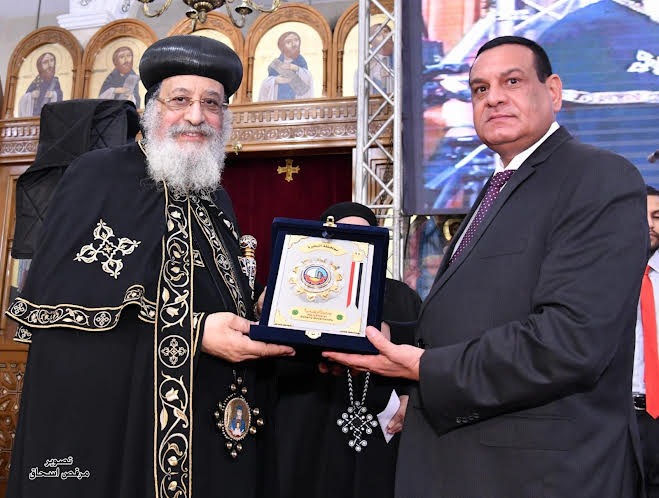 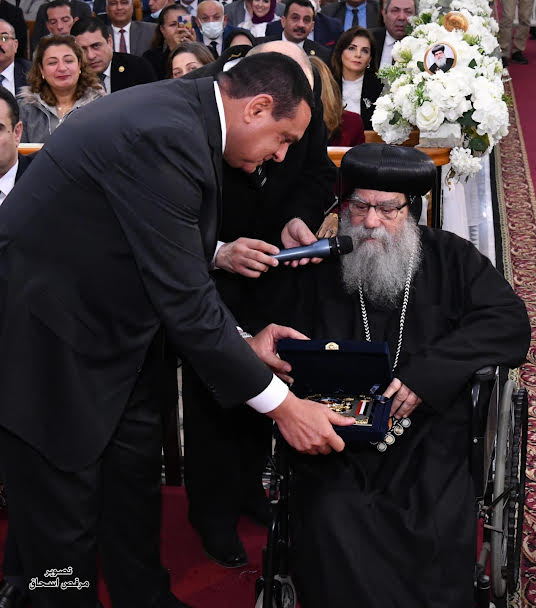 The Church reciprocated with a gift to the Governor, a valuable book collection on the history of Beheira from ancient to modern times.

The Jubilee Year is being marked by churches and monasteries in Beheira all along the year.

In Amiriya, south of Alexandria, Metropolitan Pachomius consecrated the church of Mar-Girgis (St George) and Anba Antonios, anointing the altars and ordaining 50 deacons and altar boys, also speaking of cherished memories of his service in Beheira since the 1970s. 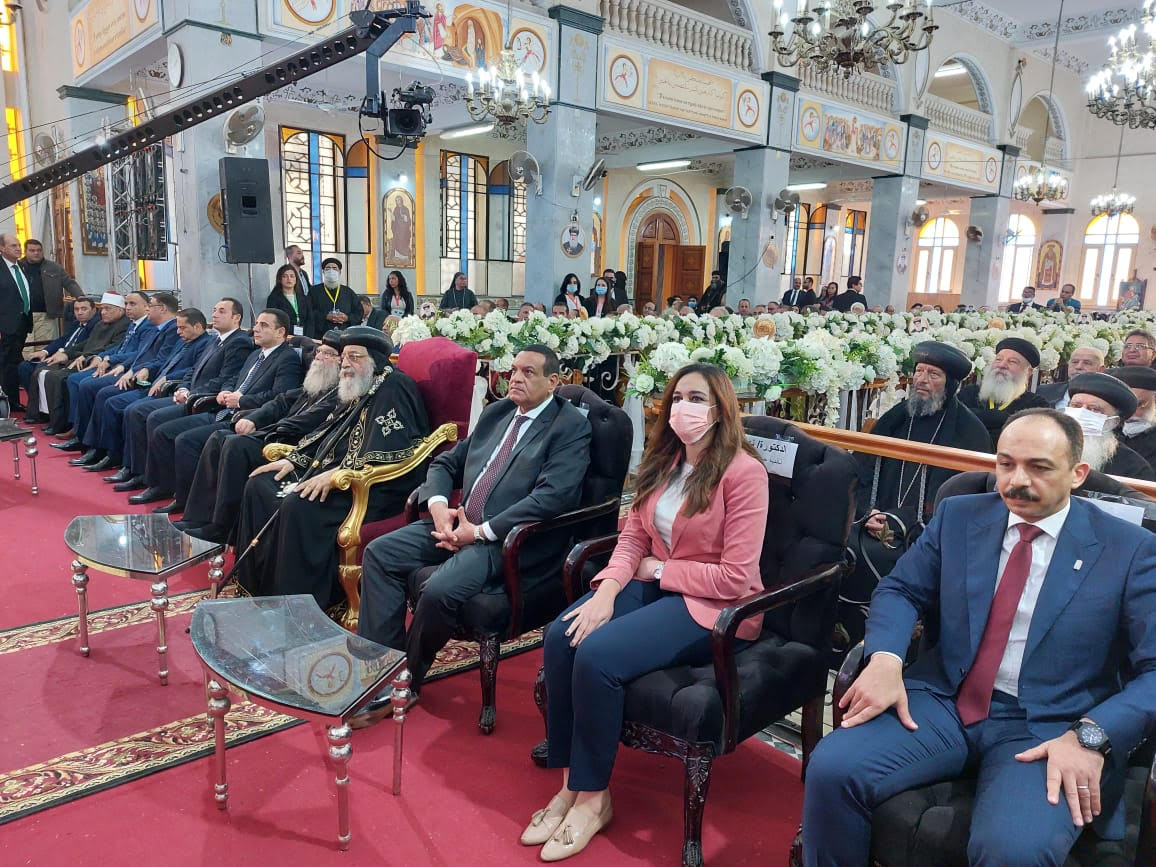 Western Desert churches in Wadi al-Natroun, Sadat City, Khatatba, and Tahrir Governorate; also churches west of the Delta in Kafr Al-Dawwar and Abul-Matamir have already held Jubilee celebrations; whereas other churches will be marking the occasion through the upcoming year.

Monday 13 December saw Anba Pachomius join Pope Tawadros in celebrating Mass at St Mark’s in Damanhour. Participating with them were a number of bishops and priests. 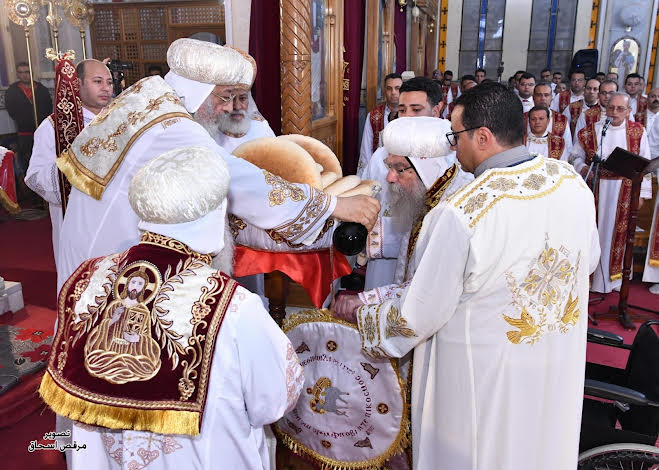 The Pope chose to give a sermon on the Bible verses of Matthew 28: 19,20  in which Jesus the Lord gives his final commandment to His disciples: “Go therefore and make disciples of all the nations, baptising them in the name of the Father, the Son, and the Holy Spirit; teaching them to observe all things that I commanded you; and lo, I am with you always even to the end of the days.”

The Pope applied the Bible verse to the life of Anba Pachomius. He said that the first commandment in the verse is “Go”; in a diocese as widespread as Beheira, the Metropolitan has gone far and wide, diligently serving and teaching. 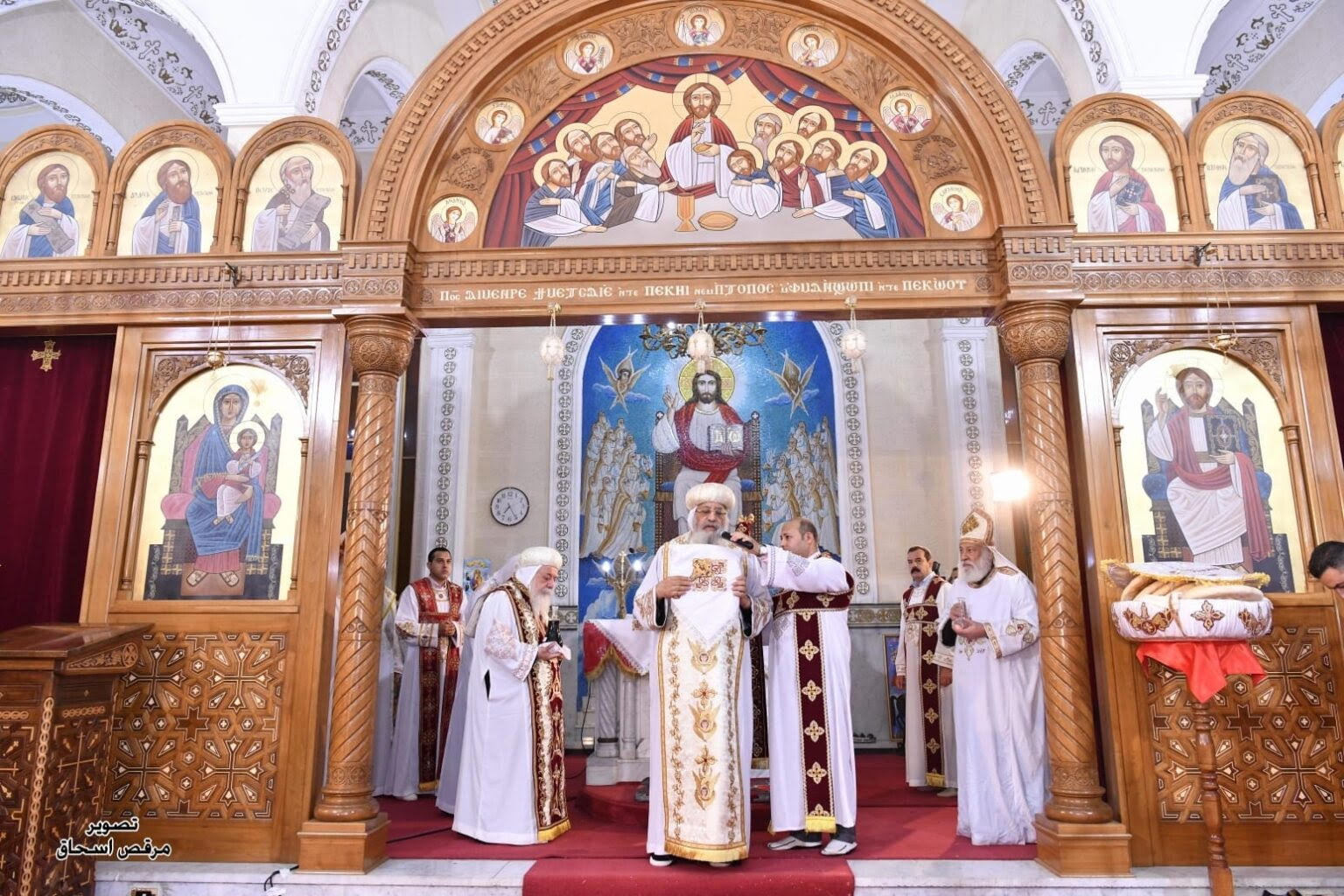 The second commandment, “Make disciples”, focuses on human relations as in imparting knowledge, wisdom, and spirituality, which can only be taught and learnt lifelong through great humbleness. This, the Pope said, was achieved by Anba Pachomius in his establishment of classes for preparation of Church servants, founding a seminary, holding spiritual gatherings for young people, and suchlike activities.

Third is “Baptise” in the sense of taking Church life to every heart. This commandment Anba Pachomius achieved through his idea of mobile altars that priests take to remote places, bringing the Church and sacraments to all people.

Fourth is “Teach”. Christ is the ultimate teacher, and faith in Him and His doctrine has been the rock upon which Anba Pachomius rooted his teaching. 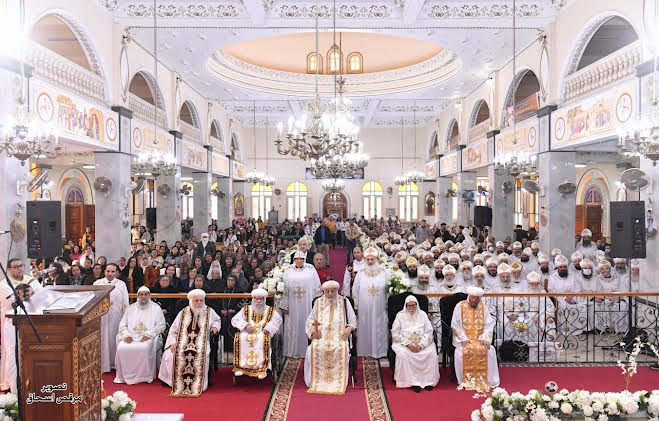 The fifth phrase in the verse is not a commandment but a promise “I am with you”. “This is our solid faith, Pope Tawadros said, “we move and Christ moves with us. This is how the Diocese of Beheira was built; Pope Shenouda once said that Anba Pachomius started with ‘nothing’, now look at what he did in 50 years with the Lord.” 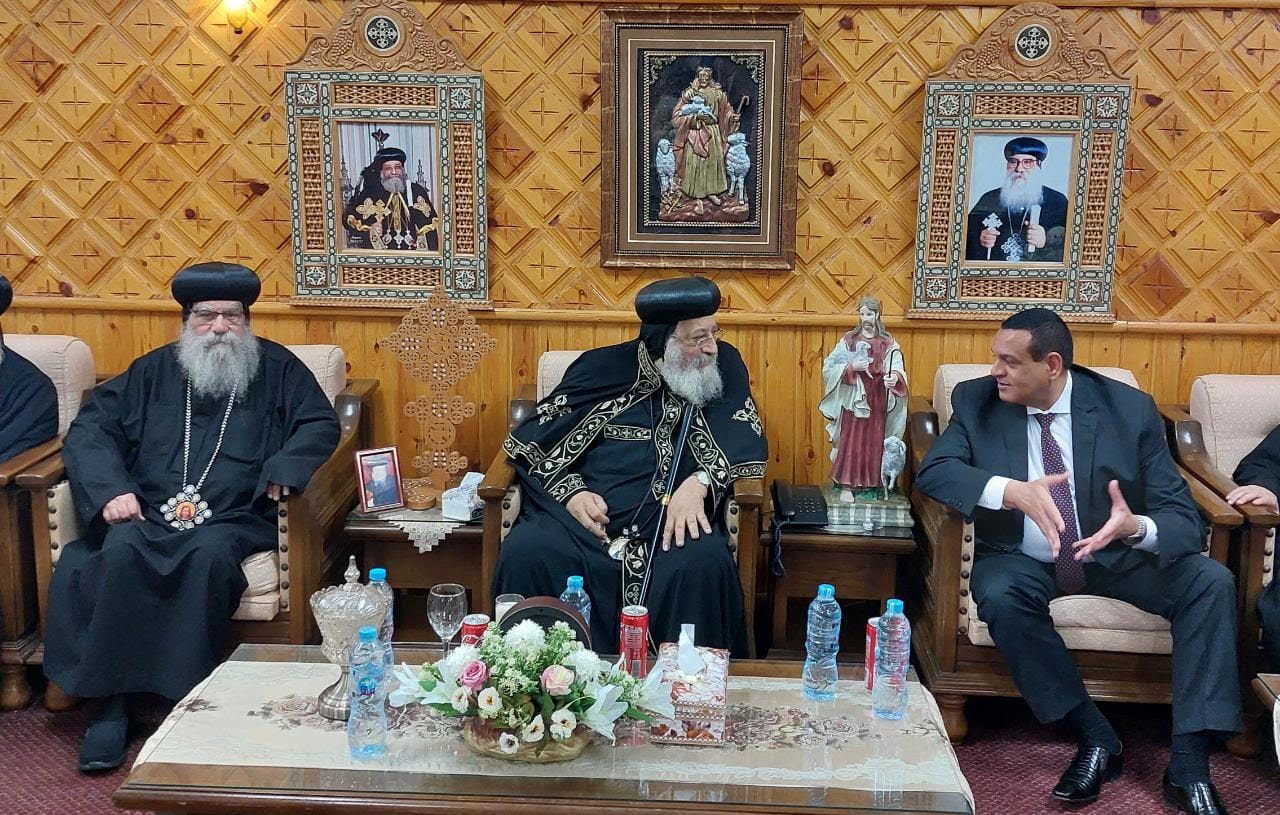 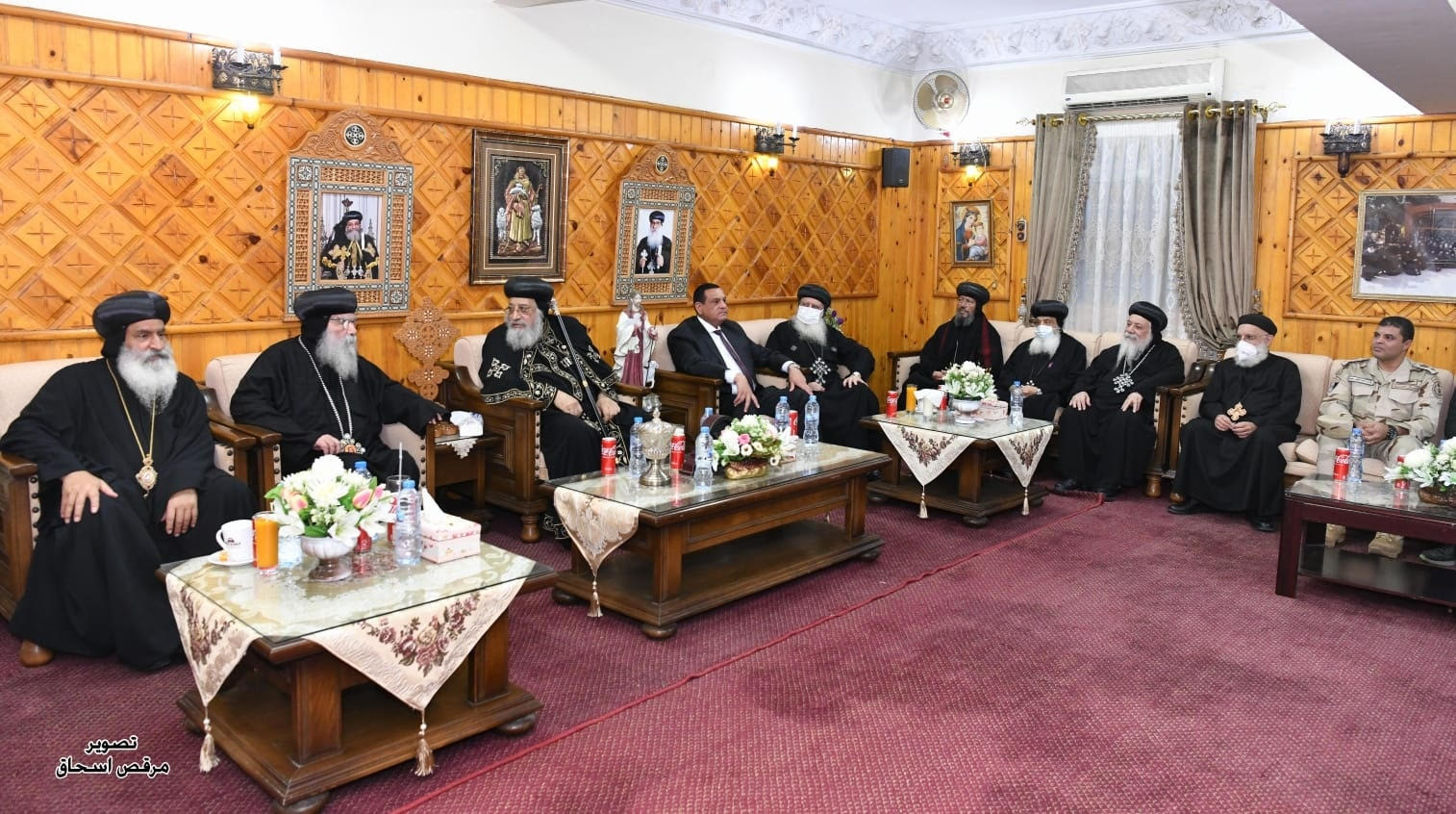 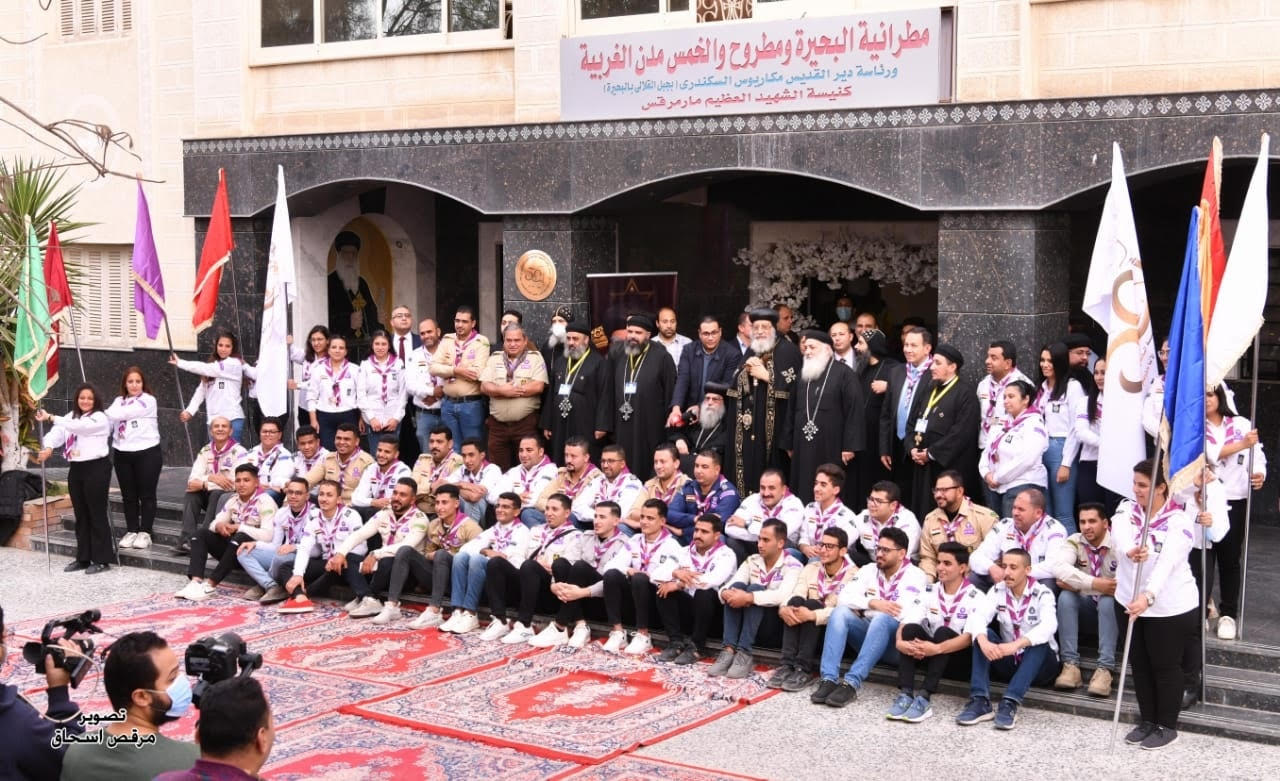 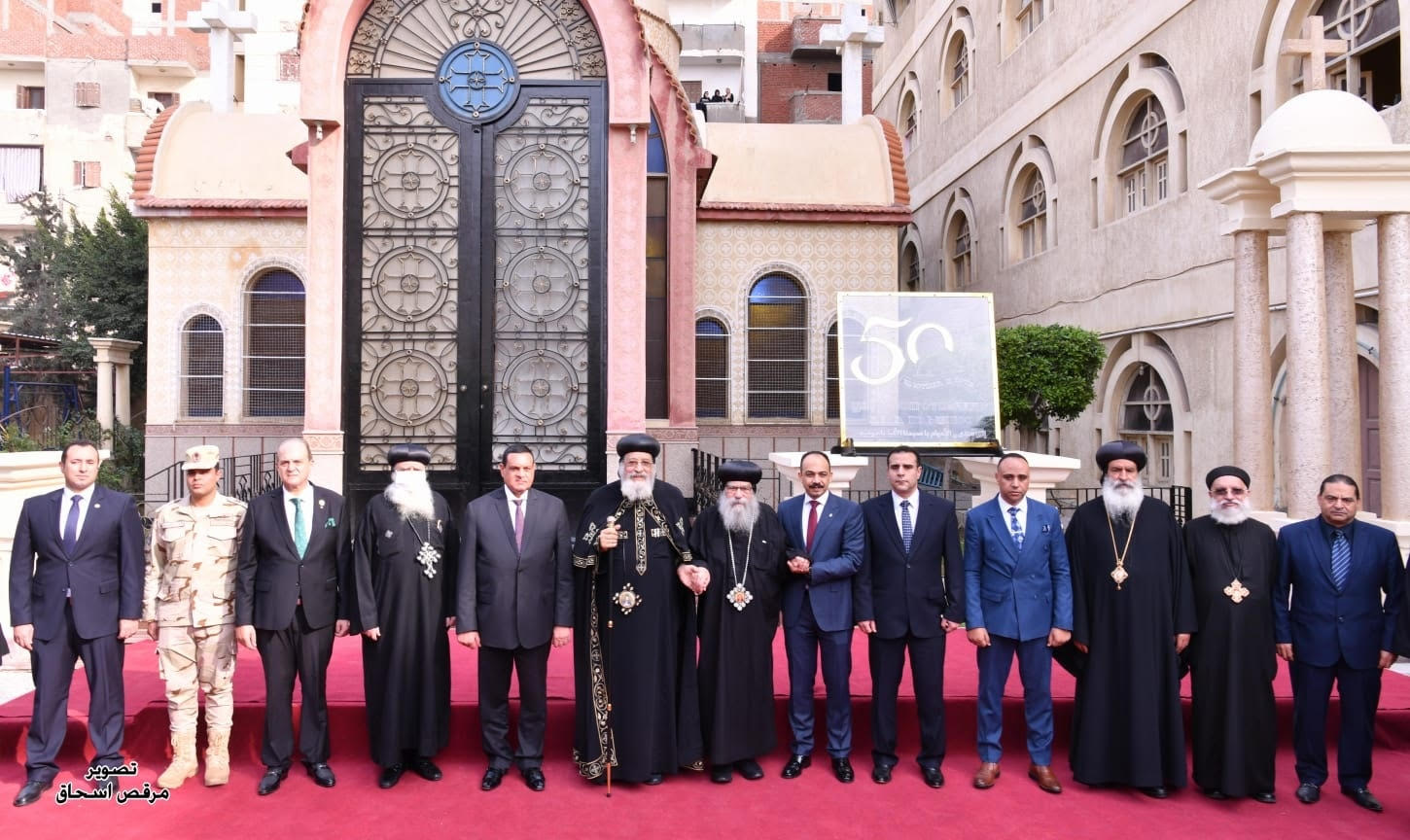