Anba Rhaphail, Bishop-General of Downtown Cairo Churches, has been on a pastoral visit to North America, that started on 29 April, during which he visited churches in various spots, meeting and praying with the Coptic clergy and congregations.

One event especially stood out because it candidly broached topics that irk Copts at large. That was a meeting with the Coptic Orthodox congregation of Montreal at which Anba Raphail arrived on 7 May by invitation of Bishop Boulos, Coptic Orthodox Bishop of Ottawa, Montreal, and eastern Canada.

The two bishops joined in celebrating St Mark on 7 May, the Eve of his feast, during Vespers at his church in Montreal. The next day they celebrated Mass together at the church of St George and St Joseph in Pierrefonds, West Island, Quebec, following which Anba Raphail was hosted by the church’s “Family Meeting” to meet the congregation, reply to their questions, and celebrate Mothers Day with them. 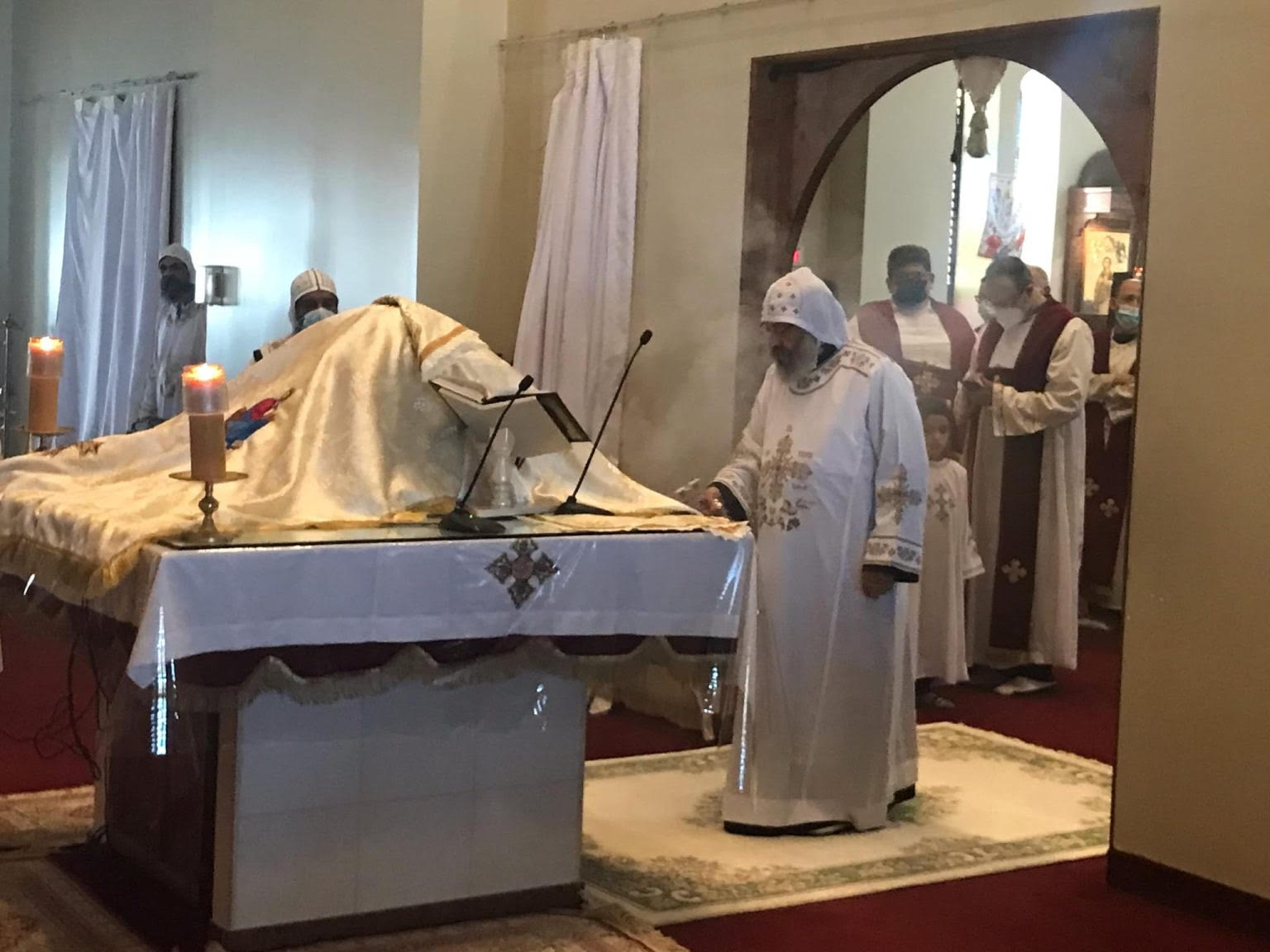 Anba Raphail began with the Bible reading from St Paul’s epistle to the Ephesians (5: 25-33) which reads: “Husbands, love your wives, just as Christ loved the church and gave Himself up for her to make her holy, cleansing her by the washing with water through the word, and to present her to himself as a radiant church, without stain or wrinkle or any other blemish, but holy and blameless. In this same way, husbands ought to love their wives as their own bodies. He who loves his wife loves himself. After all, no one ever hated their own body, but they feed and care for their body, just as Christ does the church— for we are members of his body. ‘For this reason a man will leave his father and mother and be united to his wife, and the two will become one flesh.’ This is a profound mystery—but I am talking about Christ and the Church. However, each one of you also must love his wife as he loves himself, and the wife must respect her husband”. 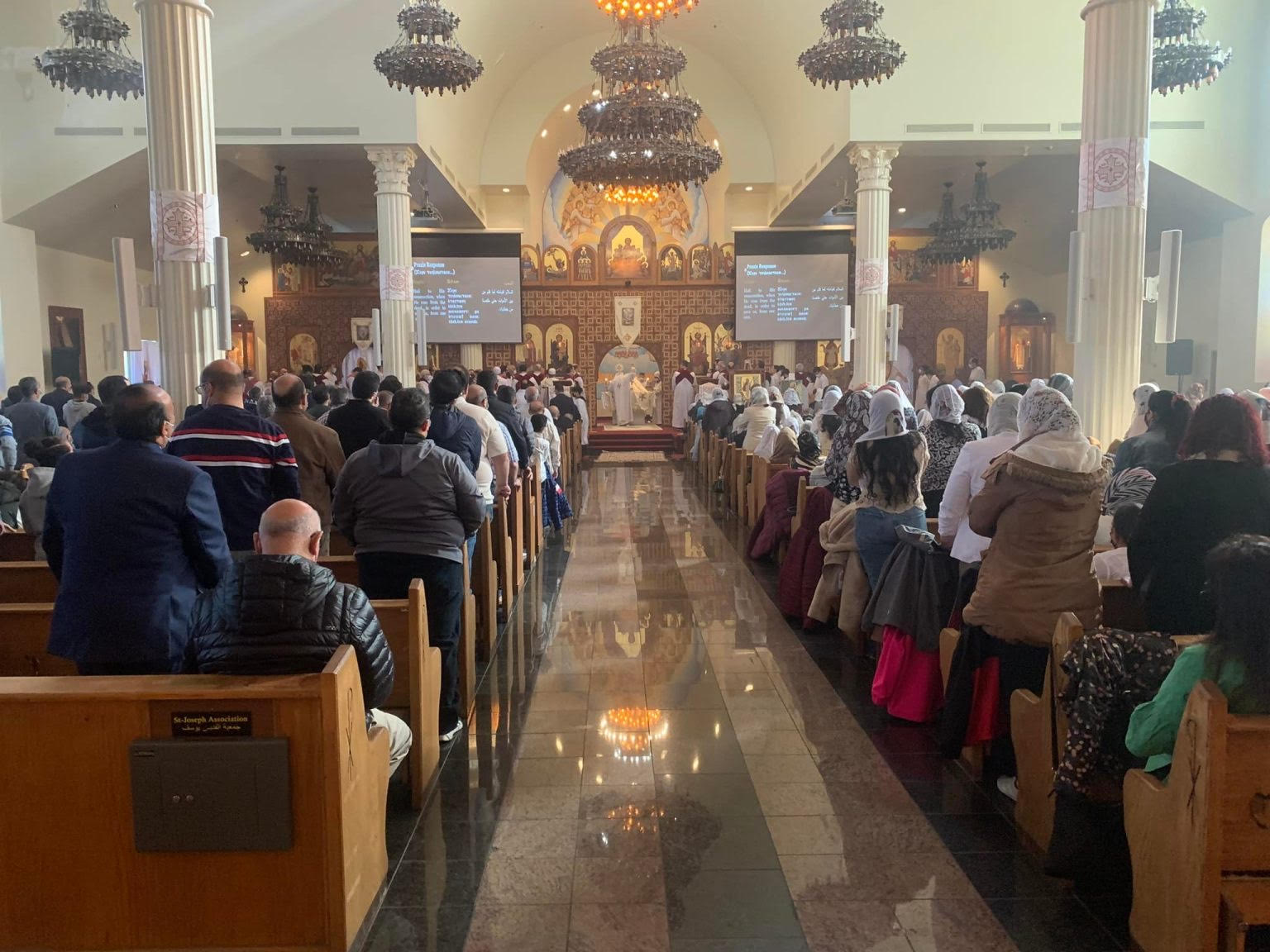 Bishop Raphail’s advice to men, he said, was that “every effort you exert on account of your wife and children will bear fruit. Your wife and children are to you as the Church is to Christ: a “radiant church”, that is full of glory. A radiant family is the outcome of positive attitude towards all its members; negative remarks and attitudes towards the wife or children are detrimental.

“A wife should respect her man in her heart and before others,” Anba Raphail said. “And the Bible passage goes on to say: ‘Children, obey your parents in the Lord for this is right.’

“Christian marriage,” he stressed, “is in essence a beautiful union and profound mystery.”

Men and women in the congregation asked questions about how to handle ill-tempered spouses.

Anba Raphail and Anba Boulos gave their answers to these questions. “No one argues with himself or herself!” Anba Raphail said. “More often than not there is some provocation. Some persons are easily provoked and run into a rage, but inevitably calm down and frequently apologise. A spouse should try to find out what provokes the other, and attempt to avoid it. Parents must exercise wisdom and calmness in order to raise their children in a wholesome climate.”

Anba Boulos said that a Christian marriage implies that there is a union between the man and wife, a tripartite union in which Christ is there between the two partners. “When any of them looks at the other,” he said, “he or she sees Christ first. If Christ is no longer there, it is because the Holy Spirit has dwindled in the marriage, perhaps because their prayers or relation with God has become lukewarm; they have forgotten that they are bonded with the holy sacrament, that they are no longer two but one. 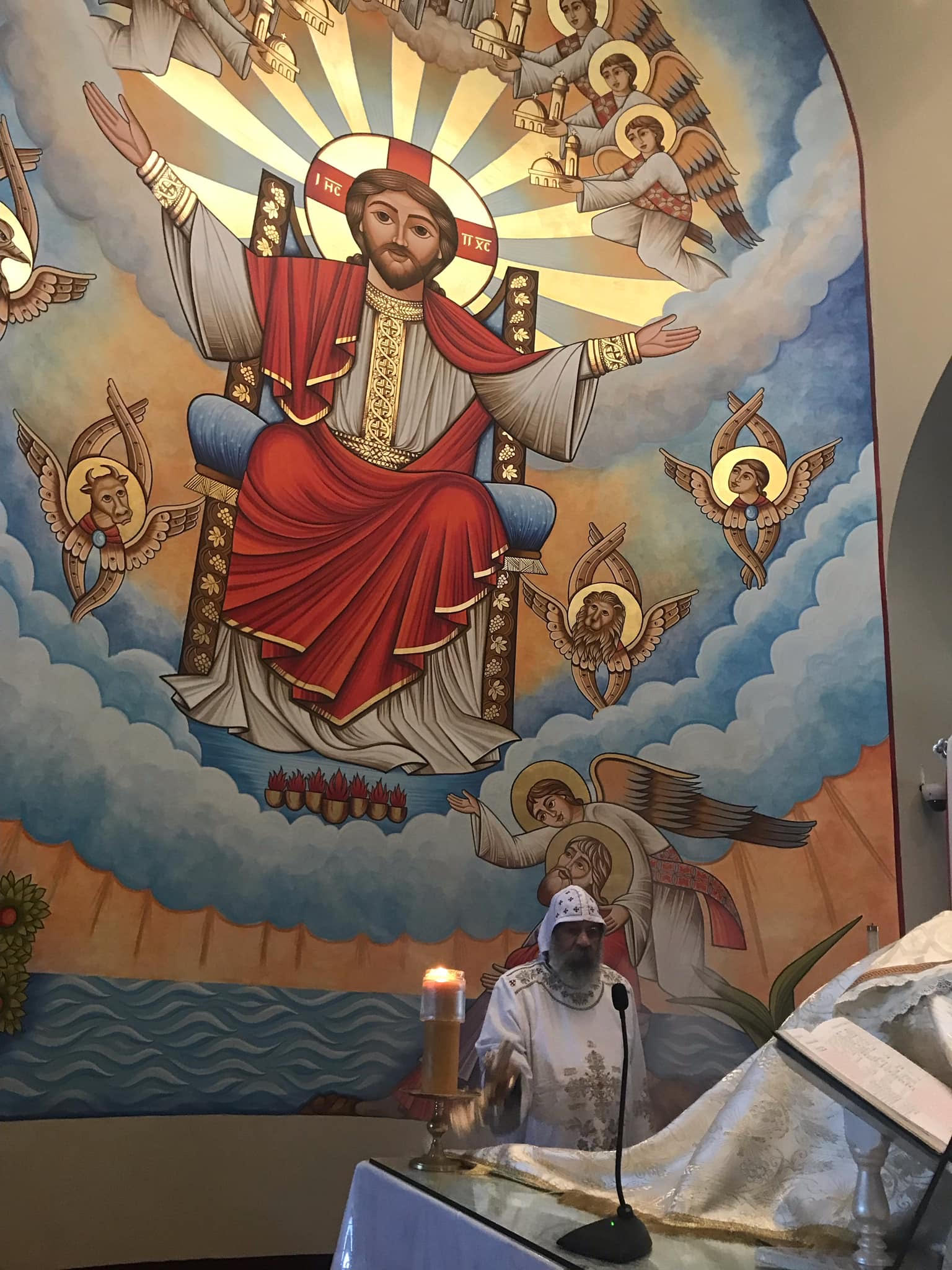 “A home where prayer and Bible reading are weakened is one no longer fortified against Satan who can then easily conquer all, the parents and children.

“Problems in the family are solved through prayer, not through blame. If you know of a family who has problems, pray constantly for them instead of intervening or interfering which only swells problems.”

Anba Boulos then addressed parents, advising and pleading with them to get closer to their children and avoid a gap between them. “Understand your children,” he said, “accept them, accept their sins and errors. Pray with and for them. Don’t treat them with outdated mentalities you might have carried with you from Egypt’s conservative community. Please realise that matters are different here. Don’t make it difficult for us as we try to minister to them. We have in Church groups for solving problems faced by adolescents and young people, according to their needs and to Christian teachings.

“Is there any way that would let me esteem my husband, and not see his faults?” One wife asked.

“Only through love,” Anba Raphail replied. “Love sees no fault, When a couple decide to marry, they are eager to be together and happy to get married. What happens then? Why does this love wane instead of flourishing? Some say because they find a different reality upon marriage. But what did you expect? That your spouse is an angel? There are no angels; we all have faults. Satan uses these faults to harm us. But we should “swallow” each other’s faults and grow in love.

Another wife asked what to do with her husband who never goes to church. Anba Raphail said that it does happen that women may be the prayerful churchgoers but their husbands aren’t. “But this puts you before the responsibility of being patient and sweet with him. Don’t be cross with him or make him feel like ‘I’ll go to Heaven but you you’ll rot in hell!” 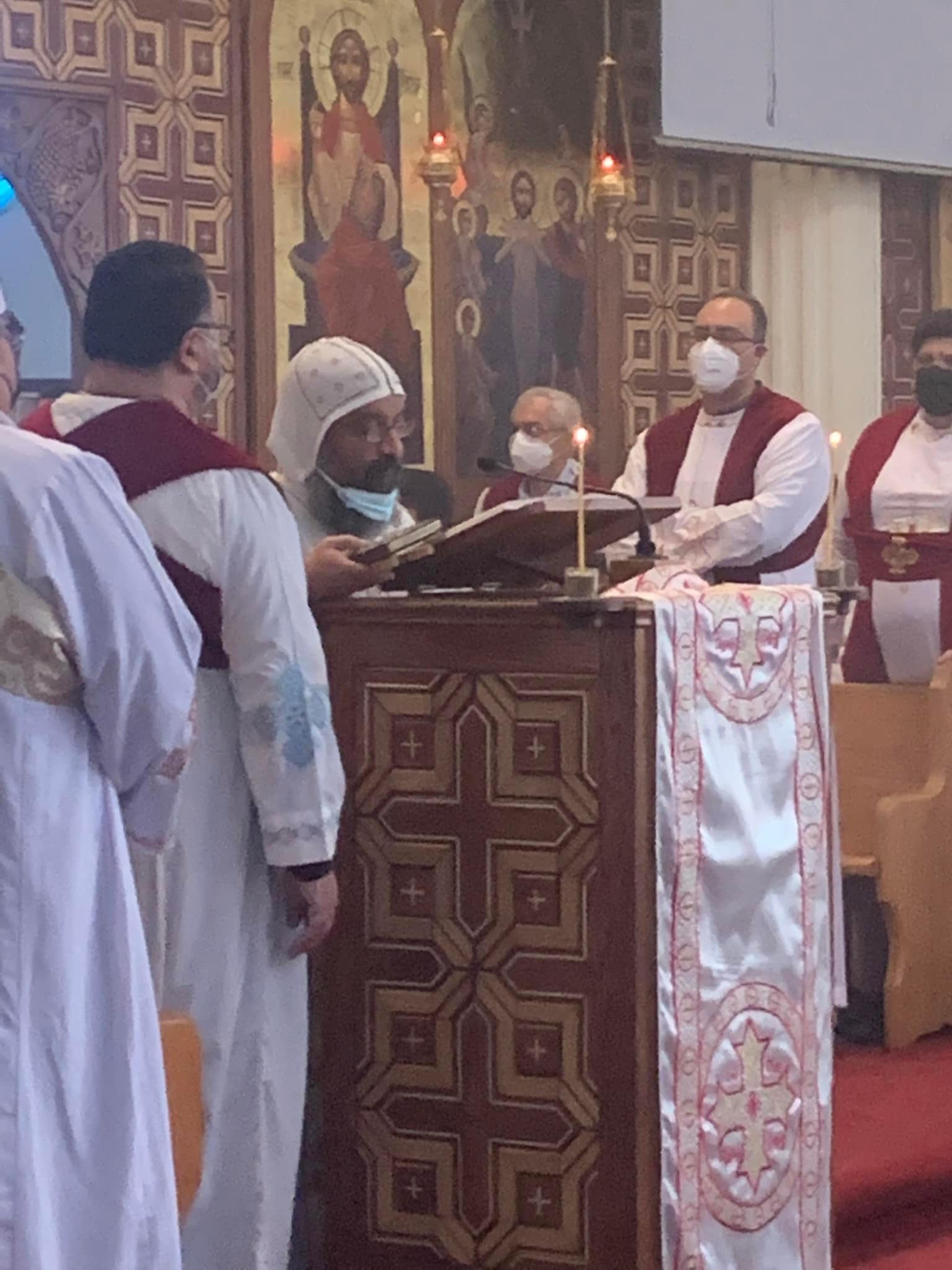 An important question concerned the reason divorce and separation rates run so high in our modern times. Where does the Church stand from separated couples? Many of them feel rejected by the Church and decide to leave it.

Anba Raphail said he believed the high rates owed to personal vanity or to having made a wrong choice. It is normal for any two persons to have their differences, but humility and understanding could solve a lot of problems.

The Church does its utmost to override the problems. “It is not fair for them to retaliate by leaving the Church; after all, the Church never forced them to marry. But once a man and woman marry, the Church applies the teaching of the Bible: ‘What God has joined together let no one separate’. Even so, he said, couples seeking divorce go to the Church’s Clerical Council which handles every case individually and takes a decision accordingly. But those who do not like these decisions take to social media to harshly criticise the Church.

“What does ‘having Communion unworthily’ mean? 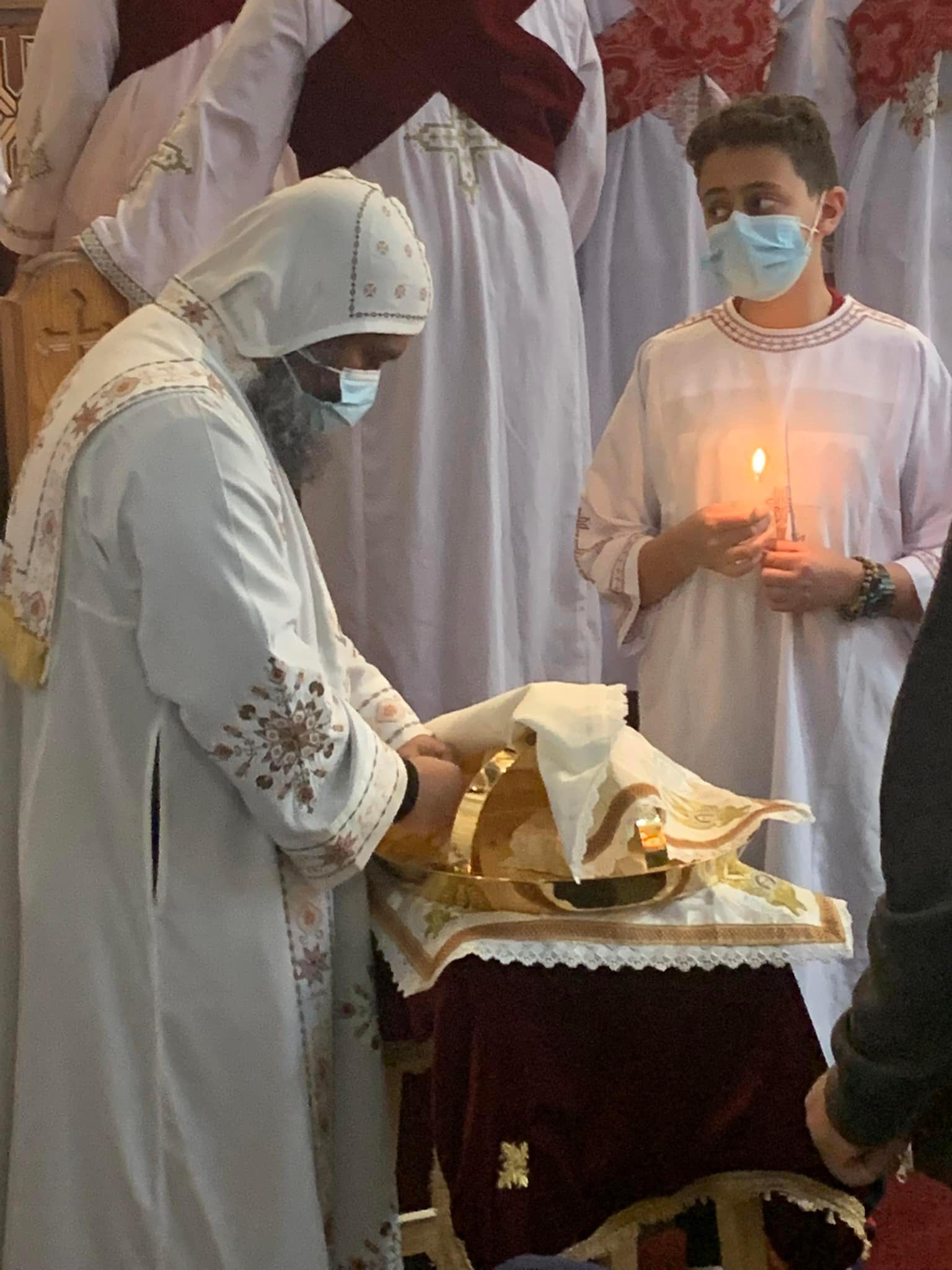 The Bishop also said that if you do not go to Mass as early as it begins, you are unworthy of Communion. “Long distances or crowded roads are no excuse,” he said. “You can’t be late for work, so why can you be late for Mass?”

A fifth reason for unworthiness, he said, was persisting in living in mortal sin and refusing to repent.

Anba Raphail was also asked for his opinion of forgoing the Coptic language in churches in the Diaspora, even though it seemingly contradicts a movement of teaching Coptic language and melodies to deacons and psalters. His reply was that this occurred in Egypt too because many Copts are unfamiliar with it. “But ours is the ‘Coptic’ Church,” he said. “Coptic denotes an entire culture illustrated in its language, art, icons, rituals, music and melodies. I ask you to cherish this culture. You live in a society that includes various ethnicities who each have their own cherished culture. You too should cherish your own.

“The Coptic Church has a history of adapting its rituals to changing times and places. We even made Friday our main day in churches because Sunday is a working day in Egypt; but Sunday Mass still maintains its prominence of course. We have prayed in Coptic, Greek, Arabic, English, and French or other languages when we needed to. Now there are screens that show the text of the prayers in all languages relevant to the congregation. So why not pray in Coptic? Here, the older generation likes prayer in Arabic, but this does not at all suit the younger generations. So let us use translations into whichever languages we need, but retain Coptic language worship.”

The question of deaconesses

A question posed to Bishop Boulos read: “Is it possible to ordain deaconesses here in Montreal, just as Metropolitan Serapion did in L.A?”

Bishop Boulos replied by first confirming that “of course there can be deaconesses ordained in Church; Olympias and Phoebe were deaconesses in the early Church. But I wish to tell girls and women that that there are roles for deacons and others for deaconesses. Deaconesses can do tasks which deacons can’t do, such as helping with the baptism of women, and offering care to old women; these are tasks men cannot do. As for whether or not women or girls are allowed into the sanctuary, this has nothing to do with impurity or unfitness or any suchlike arguments. It simply reflects a difference in service or ministry. God has created us male and female, each has roles to do. In the past, no man except the senior deacon was allowed into the sanctuary. But matters changed and others were later allowed. 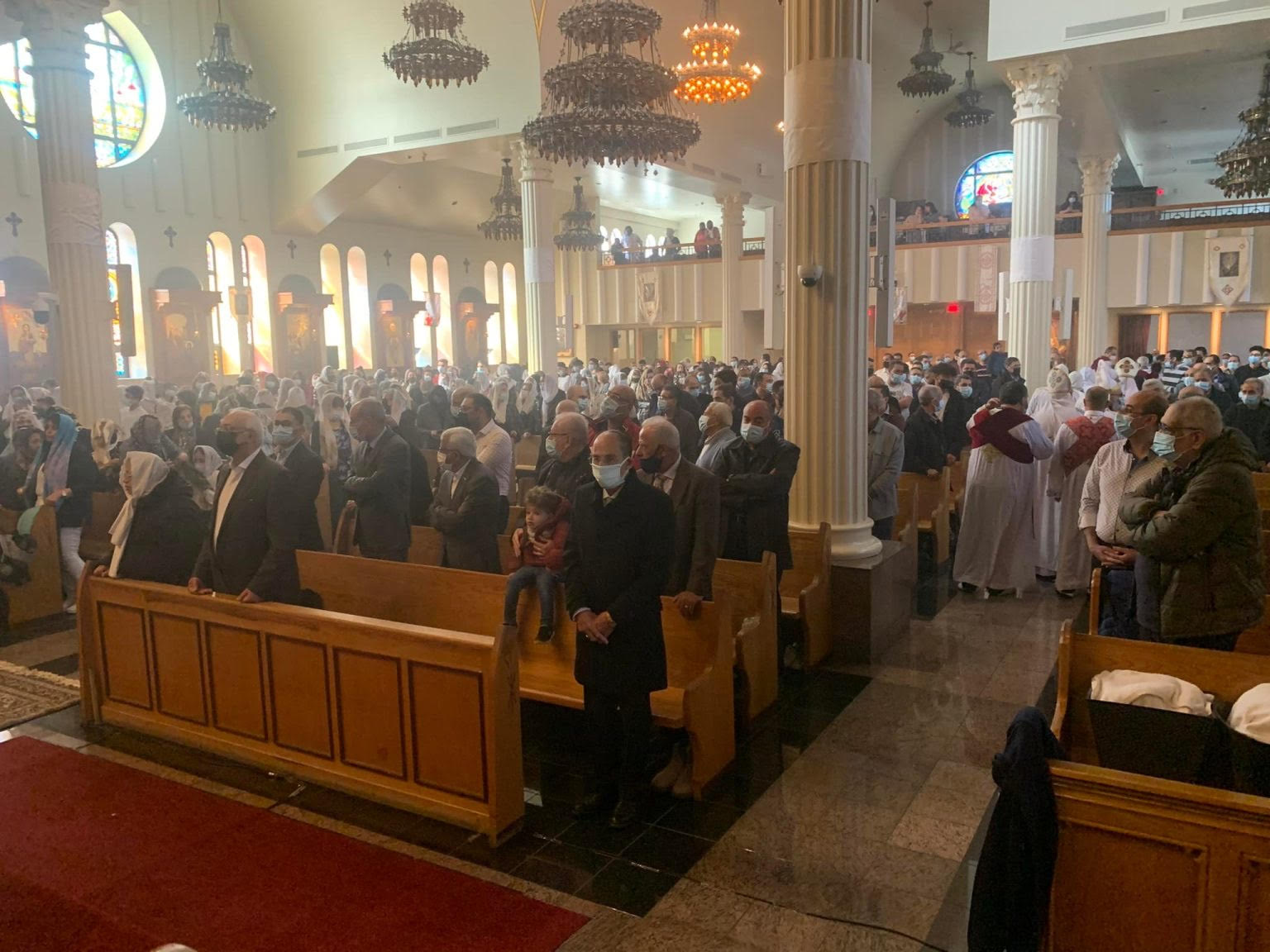 “I just wish girls would not be thinking ‘why can’t we be allowed to do what men do?’ There are roles for everyone; no role is ‘better’ than another.

“We were recently singing Midnight Praise in this church, and I gave the cymbals to the girls to accompany the choir. This was an untraditional move.

“By the grace of God, we will be announcing rules to ordain deaconesses soon.”