The Coptic Orthodox monastery of Deir as-Sultan in Jerusalem is again the scene of a bitter conflict. Parties to the conflict are: the Coptic Orthodox Church, the rightful owner of the monastery; Ethiopian monks who have been long-time residing guests at the monastery since 1654 but have been attempting to seize it since 1820; and the Israeli government which has sided with the Ethiopians since 1970 despite a 1971 court ruling by Israel’s Supreme Court in favour of the Coptic Church. 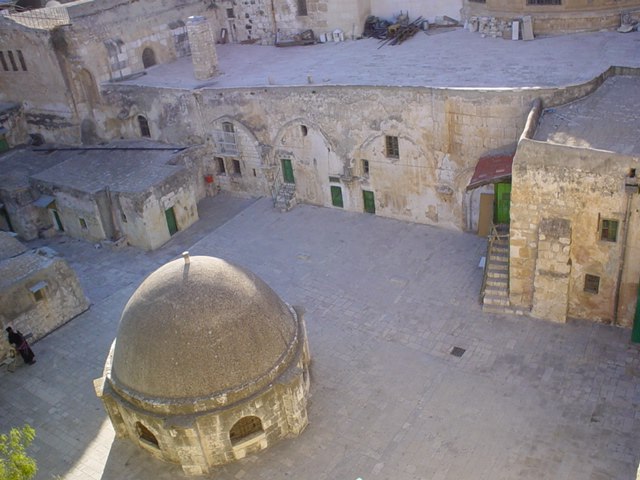 Monastery of the Sultan

The monastery, which lies on the rooftop of the church of the Holy Sepulchre within the walls of the Old City of Jerusalem, was built by the Roman Emperor Constantine the Great in 335. In the 7th century, it was granted to the Coptic Church by the Ummayad Sultan Abdel-Malek Bin Marwan (684 – 705); hence its name Deir as-Sultan, Monastery of the Sultan. In the 12th century, Salah al-Din al-Ayyubi, famous as Saladdin, confirmed its ownership by the Coptic Church, a fact that remains to this day uncontested, proved unequivocally by original deeds and documents. 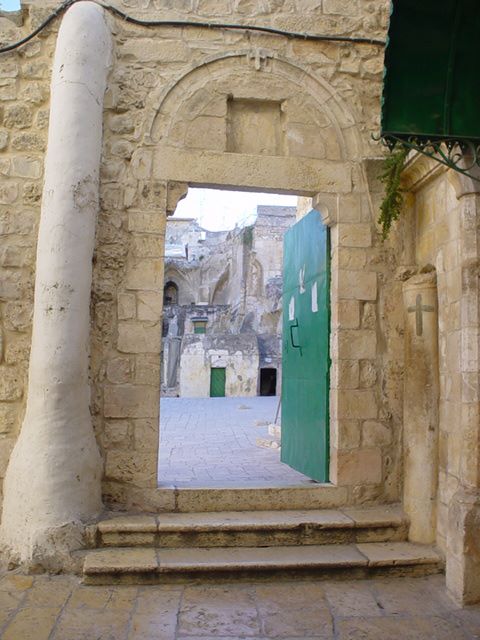 The year 1850 witnessed the start of what was to become an interminable battle by the Ethiopian monks to seize the monastery. In every one of these numerous attempts, however, the Copts proved beyond doubt their claim to the monastery, and were thus empowered to it by Jerusalem authorities. That is, until April 1970.

In April 1970, the Ethiopian guest monks took advantage of the fact that the Copts had descended to the church of the Holy Sepulchre to celebrate Midnight Mass on the Eve of the Feast of the Resurrection; they changed the locks to the staircase connecting the monastery to the church below, and practically seized the monastery. This was done by approval of the Israeli government, and under protection of the Israeli military. At the time, Egypt and Israel were at war.

The Coptic Metropolitan of Jerusalem directly took the case to court. On 16 March 1971 Israel’s Supreme Court ruled in favour of the Coptic Church, unanimously deciding that the Israeli government should hand the keys of the passageway and the two monastery churches to the Copts. To date, however, and despite numerous official complaints and reports by the Copts, the Israeli government has refrained from executing the court order.

Israeli authorities have taken a hostile stance against the Coptic Church’s rights to the monastery. The Egyptian Foreign Ministry, the Church said, has strongly supported the Coptic Church in its demand to reclaim Deir as-Sultan, seeing it as heritage that concerns Egypt in its entirety, not merely its Copts. 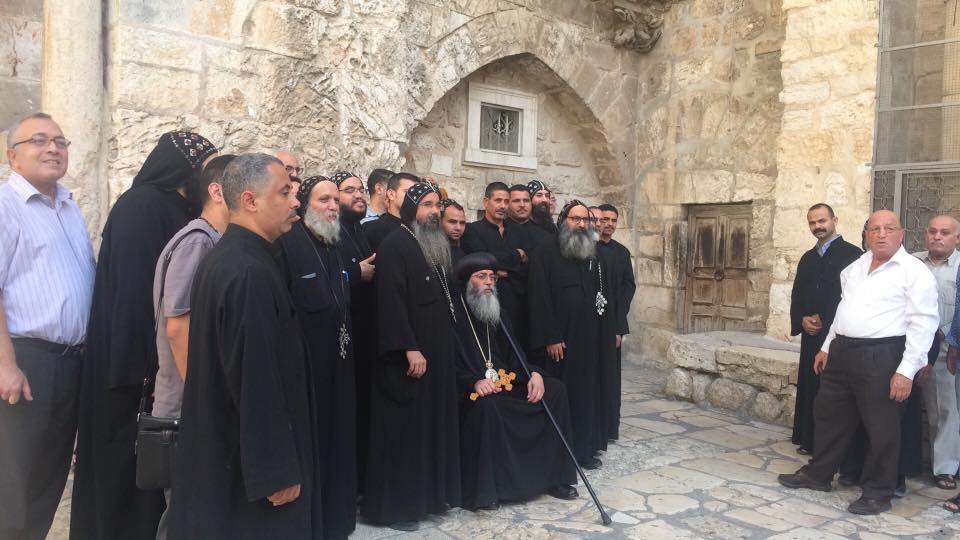 On 22 September 2017, a stone fell from the roof of the church of Michael Archangel at the monastery. This led the authorities of Jerusalem municipality to close the church until the damage could be fixed. According to the Coptic Church, all survey of the site and negotiations on repairing the damage were conducted without informing the Coptic Church in its capacity as the owner. The Coptic Church officially expressed its disfavour in writing to the authorities concerned, and offered to do the necessary repairs and shoulder the expenses. This offer, however, was rejected and the Israeli government said it would—as an impartial party—do the repairs. The Coptic Church accepted, provided it is notified in its capacity as owner.

A month later, the government’s construction engineer attempted to bring equipment into the monastery to do the repairs. The Coptic Church was not informed beforehand. This drove the Coptic monks, deacons, and workers at the monastery to stage a peaceful protest at the gate of the monastery, and to prevent any equipment from being moved in. Heading the protest was Anba Antonios, Coptic Orthodox Metropolitan of Jerusalem and the Near East.

The Church said that the Egyptian embassy in Tel Aviv intervened, and the repairs were postponed subject to prior coordination with the Coptic Church.

The protest was not to be the last. 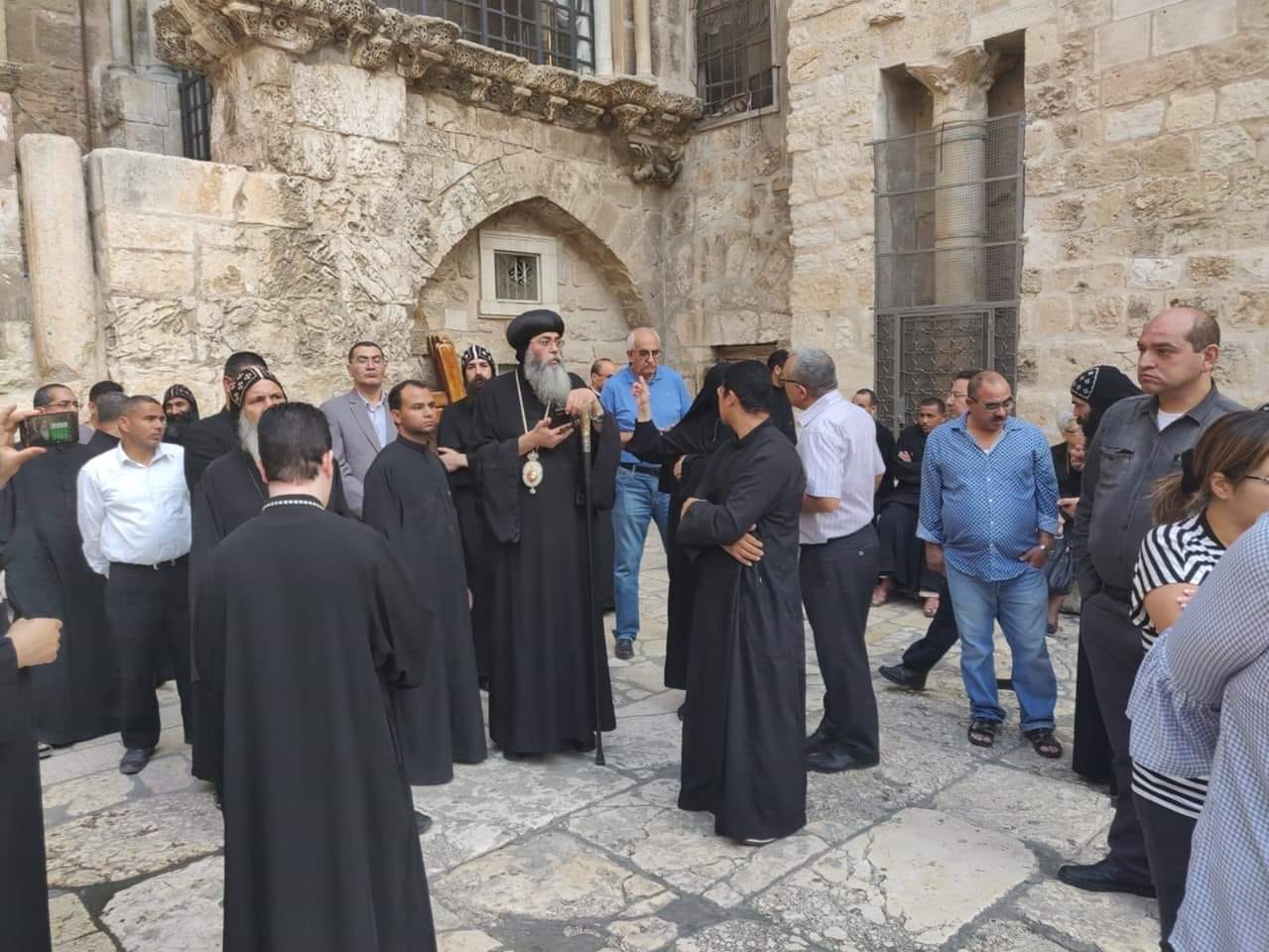 In March 2018, Anba Antonios, led another peaceful stand in front of the monastery to protest against actions taken by the Ethiopian monks without coordinating with the Coptic Church in its capacity as owner. The Ethiopian monks had replaced old doors at the monastery with new ones without notifying the Coptic Orthodox Church which saw this as an offensive action and a flagrant violation of the Jerusalem status quo system.

At the time, Anba Antonios told Watani, “I had been on a pastoral visit to Jordan and Kuwait which fall within my jurisdiction. I was informed by those in Jerusalem that the Ethiopian monks had replaced the doors, and had thrown out the Coptic monk resident there, who had taken a photograph of the new doors. Once I returned, I insisted on entering Deir as-Sultan and on removing the new doors. The Ethiopian monks were hostile; holding sticks they attempted to stop me from entering. But a number of Copts immediately surrounded me, and we entered the monastery. I called the police, the Ministry of Religions, and the Egyptian Ambassador in Tel Aviv. I did not leave till the new doors were removed and the Coptic resident monk reinstated.” 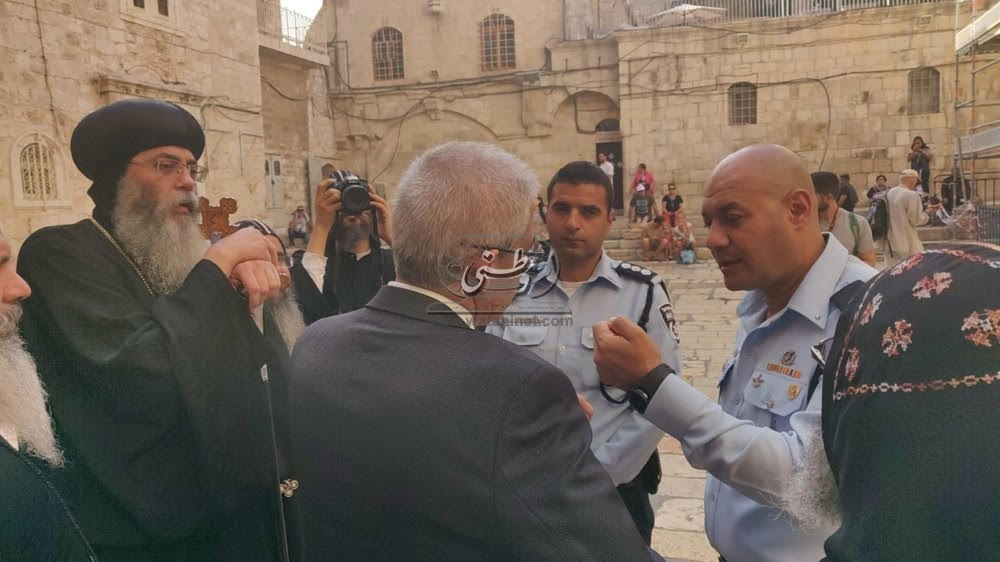 On 10 October 2018, Anba Antonios was contacted by Egypt’s Ambassador to Tel Aviv who said the Israeli Ministry of Religious Services had orally demanded of him to inform Anba Antonios of the intention of Jerusalem municipality to move equipment into Deir as-Sultan to conduct the repairs needed there. The Israelis threatened they would use force in case anyone attempted to stop them from going in. This was to be done Tuesday 23 October 2018. The Church saw in this move a usurpation of its rights to the monastery, and a flagrant bias towards the Ethiopian monks’ occupation of it.

On 23 October, Anba Antonios led a peaceful protest in front of the monastery. At 6:30am on Wednesday 24 October, the Israelis began moving equipment into the monastery, violently clashing with the monks who attempted to stop them. The monk Macarius al-Urushalimi was dragged on the ground and arrested, but was later in the day released together with the other monks upon intervention from Egypt’s Ambassador to Tel Aviv. The Israelis are now inside the Coptic-owned monastery, with no regard to Coptic rights to it. The Coptic Church filed a complaint with the Israeli Justice Ministry and Prime Minister. 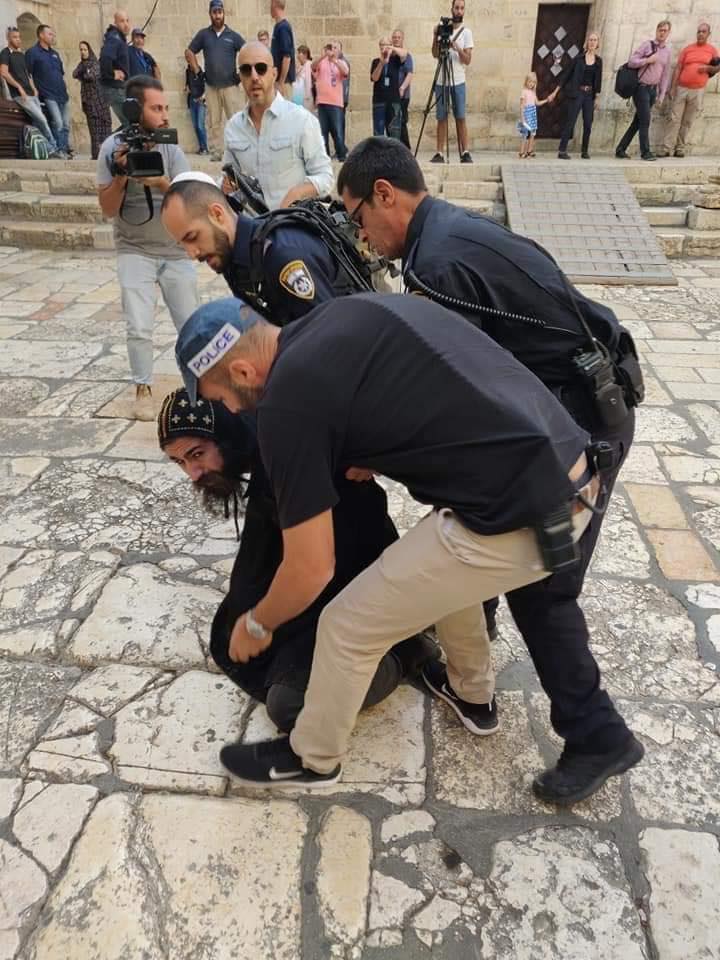 On the evening of 24 October, Pope Tawadros spoke of the Deir as-Sultan crisis during his weekly Wednesday sermon. He said he was in constant contact with Anba Antonios, and was following the matter closely. He gave a briefing of the history of the monastery and the Coptic-Ethiopian conflict regarding it. “The Ethiopian Church is a sister Church to us,” the Pope said, “and we wish nothing to cloud our relations.” Unfortunately, he said, political overtones mar the matter.

Pope Tawadros revealed that there had been two modern-day attempts to resolve the Deir as-Sultan conflict. The first, he said was through a high-ranking Coptic committee that included clergy and laymen, and that met the Ethiopian patriarch in 2016. Despite presenting all the necessary documents to the patriarch, Pope Tawadros said, there was no response on his part and nothing transpired out of that meeting.

The second attempt, the Pope said, took place last year through the intervention of Jerusalem’s Greek Orthodox archbishop who wished to reach some resolution to the problem. A meeting was held in Jerusalem, Pope Tawadros said, which included the Israeli Minister of Religious Services, a lawyer who represented the Coptic Church, and members of the Egyptian and Ethiopian embassies in Tel Aviv, “but the dialogue was far from impartial,” he said, “it was constantly biased in favour of the other party [the Ethiopians], and no resolution was reached.”

The Pope talked about the recent crisis, pointing out that the oral message sent by the Israeli Ministry of Religious Services on behalf of Israel’s Prime Minister to Anba Antonios through the Egyptian Ambassador said: “We are informing you, not taking your permission.” The Coptic Church, through its lawyer, objected to the message. 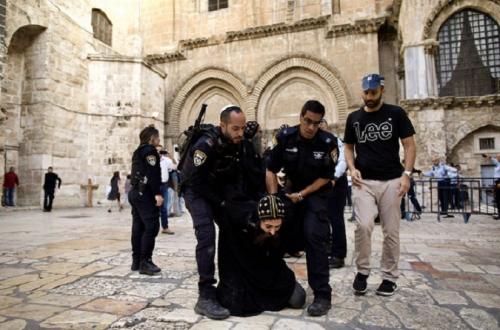 Regarding Deir as-Sultan’s current problem, Pope Tawadros said that the Coptic Church had asked that the repairs and restoration may be done under supervision of UNESCO, but its request was disregarded. Again, he said, an Egyptian building delegation had been dispatched to Jerusalem, in coordination with Egypt’s Foreign Ministry, to see to the repairs but they were not allowed to.

“The attack this morning against monks conducting a peaceful protest is unacceptable,” Pope Tawadros said.

The Pope thanked Egypt’s Foreign Ministry and Embassy in Tel Aviv for their unfailing support throughout the Deir as-Sultan conflict. He said that the Egyptian administration is closely following the Deir as-Sultan predicament, stressing that the case does not concern the Church alone but that it was an Egyptian national concern.

The Pope concluded by calling upon every relevant body: the Israeli authorities, Egyptian officials, Ethiopian Church and government to join forces in resolving the crisis “objectively, calmly, and without causing pain to any party involved.”

For its part, the Coptic Orthodox Patriarchate of the Holy See of Jerusalem and the Near East, issued a statement citing the details of the recent conflict, also the detailed history of the monastery of Deir as-Sultan. The statement said the Church was considering taking the matter to court, demanding the right to execute the necessary repairs to their property, also to execute the 1971 court order in its favour.

The Coptic Church in Jerusalem lauded the constant support of and coordination with the Egyptian Embassy, saying that efforts are ongoing to halt the gross violation against Deir as-Sultan monastery and the Coptic Church.

The statement called upon Copts inside and outside Egypt to rally for international political support for the Coptic Church in its endeavour to defend its rights. 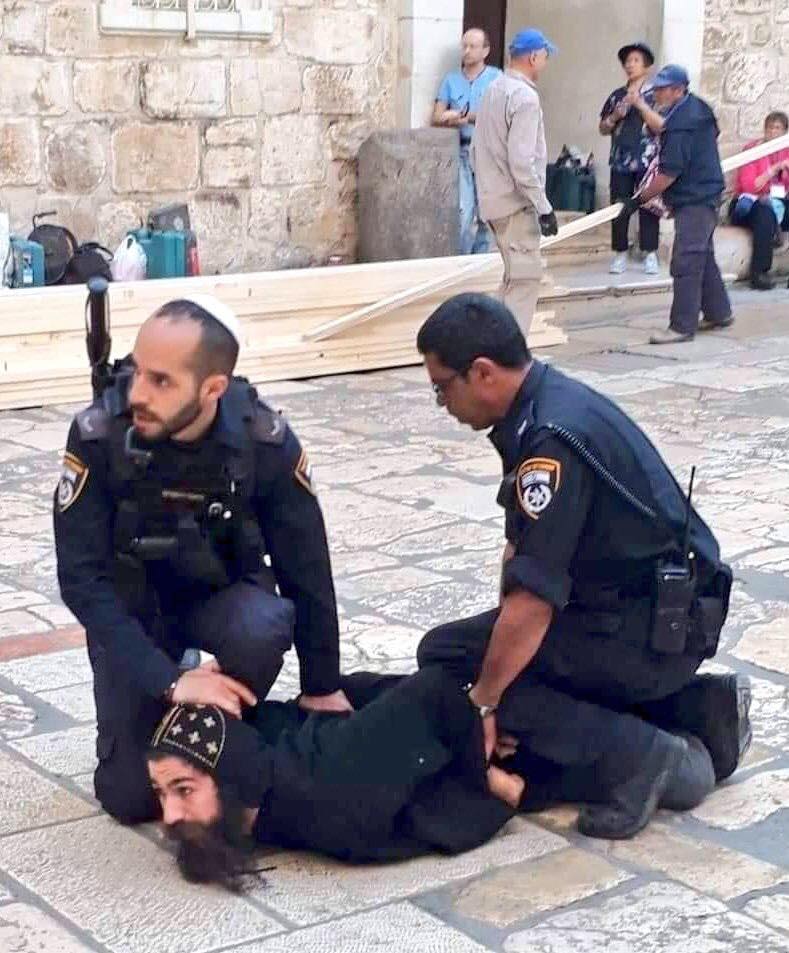 Condemnation of the Israeli actions and support for the Coptic Church in Jerusalem flowed in from inside and outside Egypt, among them: Egypt’s Foreign Ministry; Members of Parliament; al-Azhar, the topmost Cairo-based authority on Sunni Islam; the Catholic and Protestant Churches in Egypt; Synod of Bishops of the Coptic Orthodox Church in the US; Archbishop Angaelos, Coptic Orthodox Archbishop of London; Anba Giovanni, Bishop of mid-Europe, and the clergy and congregation; and Coptic association outside Egypt including those in The Netherlands and Australia.

Copts around the world started an online signature campaign on a petition to the United Nations to stop the assault against the Coptic monks in Jerusalem, and for the execution of the 1971 ruling by the Israeli Supreme Court in favour of the Coptic Orthodox Patriarchate of Jerusalem. In a few hours, the petition gathered some 25,000 signatures.