The martyrs, 20 Egyptians and one Ghanaian, were migrant labourers working in Libya. The Egyptians came from Samalout in the region of Minya, some 250km south of Cairo; 13 of them from the village of al-Our. Video footage posted by Daesh on 15 February 2015 showed them lined up in orange jumpsuits on a spot on the Mediterranean shore in Sirte where they were one by one brutally beheaded by black-clad masked executioners. The last words each of the martyrs uttered were a quiet “Oh my Lord Jesus”, or “Lord, have mercy on me”.

The horrendous footage sparked global loathing and outrage; Egypt responded the following day with air strikes that targeted Daesh bases in Sirte. President Abdel-Fattah al-Sisi ordered a church to be built in al-Our in honour of the martyrs. He proposed the church to be named “Church of the Martyrs of Faith and the Nation”, formally recognising the martyrs as martyrs of the Egyptian nation. The church was duly built, and was consecrated in February 2018.

The martyrs came to be known as the “Libya Martyrs”; the Coptic Church officially declared them Martyrs of Faith, and the date 15 February was pronounced the Feast of Modern-Day Martyrs. Together with the Libya Martyrs, it celebrates many others Copts who, during the 21st century, lost their lives on account of their Christian faith. 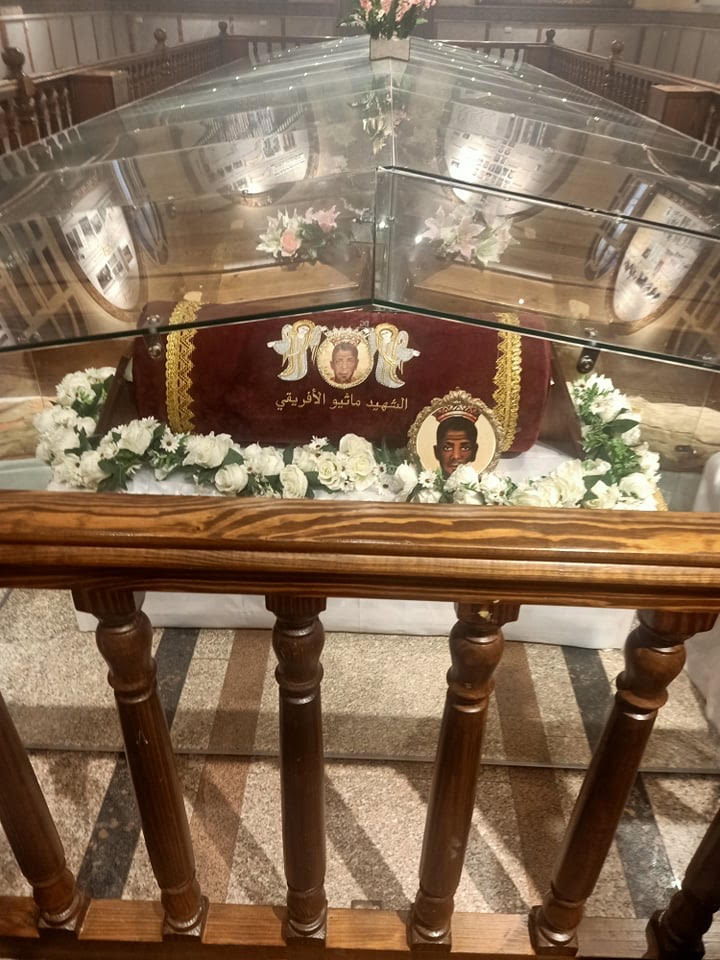 In September 2017, Libyan authorities discovered the bodies of the martyrs. They were identified by DNA testing, and the remains of the 20 Egyptians were brought home in May 2018. Pope Tawadros was on hand to receive them at Cairo Airport where they were welcomed by a deacon procession chanting songs of joy and praise. They were taken to the church in al-Our and laid to rest in a shrine built for them there.

Missing from the martyrs’ relics brought to Egypt, however, were the remains of the Ghanaian martyr, Matthew Ayariga. Copts in general, and al-Our Copts in specific, felt deep sorrow for his absence; they believed Mr Ayariga’s body belonged with those of their children—they had all faced the same fate together, should have their final resting place together, and the martyr Ayariga should be granted the same honour his fellow martyrs were being granted. 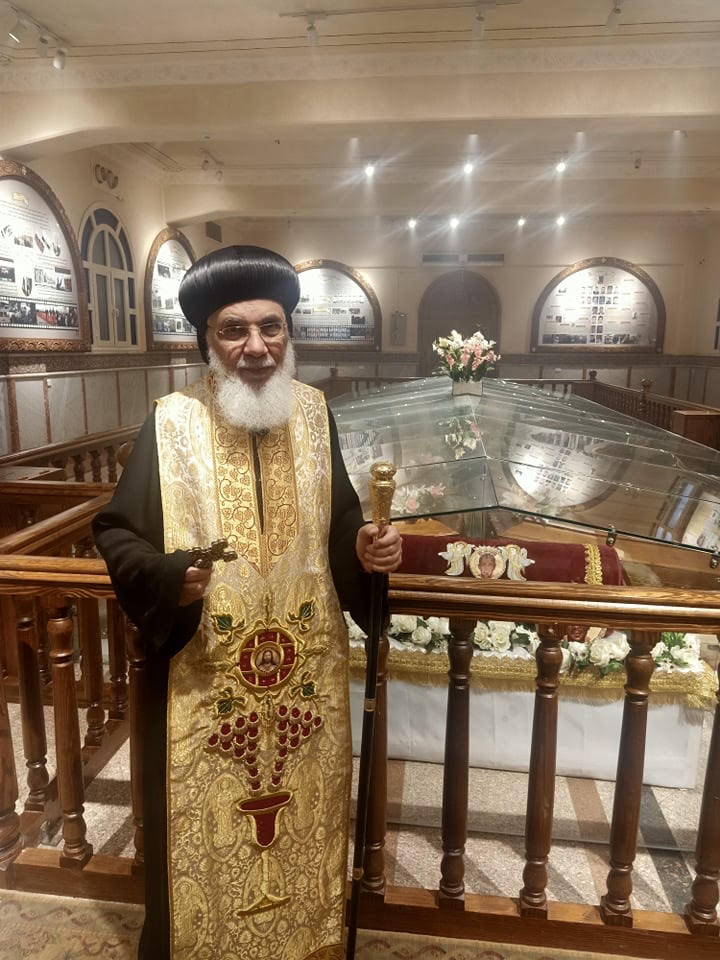 On 25 July 2019, Anba Pavnotios, Metropolitan of Samalout, dispatched an official delegation to meet the Chargè D’Affaires of the Libyan Embassy in Cairo, Fawzy al-Mabrouk Tantoush. The delegation included the priests of al-Our Martyrs Church: Fr Marcos Atef and Fr Epiphanius Yunan; Nevine Ragy, general manager of schools and projects of Samalout Diocese; and Nader Shukry, member of the board of al-Our Martyrs Church, and coordinator of crisis management for the martyrs’ families.

The Coptic delegation expressed the desire of the Copts and the Coptic Church in Samalout to be handed the remains of the Ghanaian martyr, explaining that the Church had waited so far to make that request since it was understandable that he might be claimed by his family or Church in Ghana. However, since his body had not been claimed, Anba Pavnotios decided to respond to Coptic demands and was submitting an official request to the Libyan authorities to have Mr Ayariga’s body shipped to Egypt where he would be placed alongside the 20 Egyptian martyrs in al-Our Church. Anba Pavnotius pledged that if Mr Ayariga was claimed by Ghana, he would directly hand him over.

The Libyans promised they would seriously consider the request once political conditions in Libya stabilised sufficiently to allow the transfer. 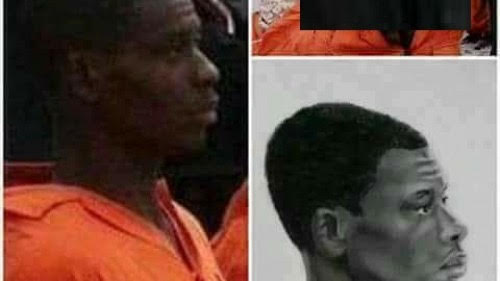 “Our joy is now complete”

Last week, the relics of the Ghanaian martyr were brought to the church of the Martyrs of Faith and the Nation at al-Our.

Once the Libyan authorities had shipped to Cairo the remains of Mr Ayariga, Anba Pavnotius officially contacted the forensic medicine authorities in Cairo to obtain the prosecution’s approval for the relics to be handed over to the Coptic Church in Samalout.

A joyful celebration was held at the church in al-Our, presided over by Anba Pavnotios who anointed the box containing Mr Ayariga’s remains with sweet spices as is the custom in the Coptic Church, and shrouded them in a covering of red velvet that carried his name embroidered in gold thread. The event was attended by the families of the Egyptian martyrs who came to join in the celebration. The relics of Matthew the African, as Mr Ayariga is fondly called by Egyptians, was then laid in its final resting place in the Libya Martyrs shrine, together with the remains of the other 20 martyrs.

For Copts, the story of the Libya Martyrs has met its final, happy ending. According to Pope Tawadros who praised the staunch faith of the martyrs, “they made their choice to stick to their faith until death”.

With Matthew the African joining his Egyptian fellow martyrs, a woman whose two sons were beheaded in the Libya incident, the mother of the martyrs Samuel and Bishoy Stephanos summed it all up: “Our joy is now complete”. 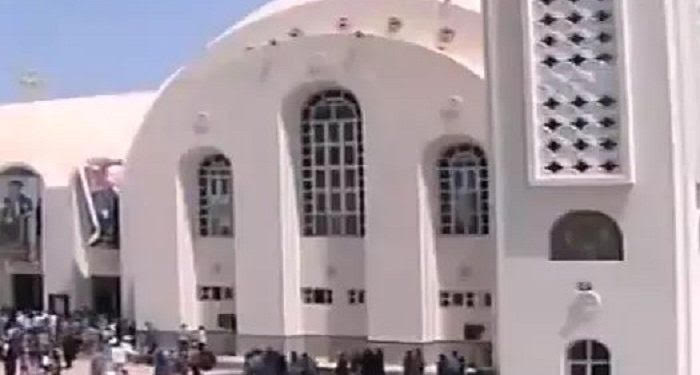