Travelling all the way from their hometown of Bahgoura in Naga Hammadi, 570km south of Cairo, to the capital, the family of the young girl Rancy Ra’fat headed to the papal headquarters at St Mark’s Cathedral in Abbassiya to meet Pope Tawadros II on Sunday 7 February 2021. Accompanying Rancy were her father, mother, and three siblings.

Rancy, a little girl with an exceptional voice and talent for singing, had a few days earlier been hosted by a show on CTV in which she surprised everyone when she it was her wish to see Pope Tawadros and shake his hand.

Nagwa Demian, Rancy’s mother told ++Watani++ that Rancy had a beautiful voice which she used to sing hymns and recite poetry. “When but a toddler,” Ms Demisn said, “Rancy would pick up the hymns and liturgical melodies her father used to listen to, and would start repeating them. It looked uncanny for such a small person to be able to perform such difficult singing. We were all amazed at her musical ear, melodious voice and perfect pronunciation.” Ms Demian said she recognised her daughter’s exceptional talent and worked to hone it. She video-recorded the little girl’s best hymns and shared them on social media.”

The family encouraged Rancy to join the church choir and theatre. Rancy’s videos on social media went viral especially in Coptic circles. “Her performance of the hymn ++Abouya Ally Enak Te’dar (My Father told me that I can)++ in our typical Upper Egyptian accent was a major success,” Ms Demian said. “Rancy has a way of singing poignant songs in a way that touches the heart.”

Rancy was invited by CTV’s talk show ++Mann yageduha (Whoever finds her)++ presented by Sally Samir, to talk about her talent and passion for performing. “During the show, Rancy surprised everyone, myself included, by saying that she would like to see Pope Tawadros and shake hands with him,” the mother recounted.

“A few days later,” she said, “Ms Odette Ibrahim, one of the show’s production team, called me and told me that the Pope would like to invite Rancy and her family to the papal headquarters the following Sunday. Elated at the invitation, we set off for Cairo that day.

“We thought that the Pope would spend a mere 10 minutes with us,” Rancy’s mother said, “but we were amazed at the long time His Holiness gave us.” When we arrived, he asked for Rancy whom he could not directly see,” Ms Demian said. “He welcomed us all so warmly, addressing each of us by name, talking to us all, and inundated us with gifts and love.” She said that the Pope talked to her youngest son Kyrillos and listened to him reciting a hymn. Then he went on a long conversation with Rancy, attentively listening to her as she sang a selection of hymns, and happily hearing her imitation of animals’ and birds’ voices.

The Pope talked to the two eldest daughters, Mariam who studies pharmacy and Heidy who is in secondary school, sensitively and caringly going into detail of what they each said. The Pope also conversed with the father, asked him about his work and his church ministry back home.

As the warm, pleasant meeting drew to a close, the Pope took souvenir photos with the family and with Rancy. He offered them gifts and a picture of him at the back of which he wrote all their names. 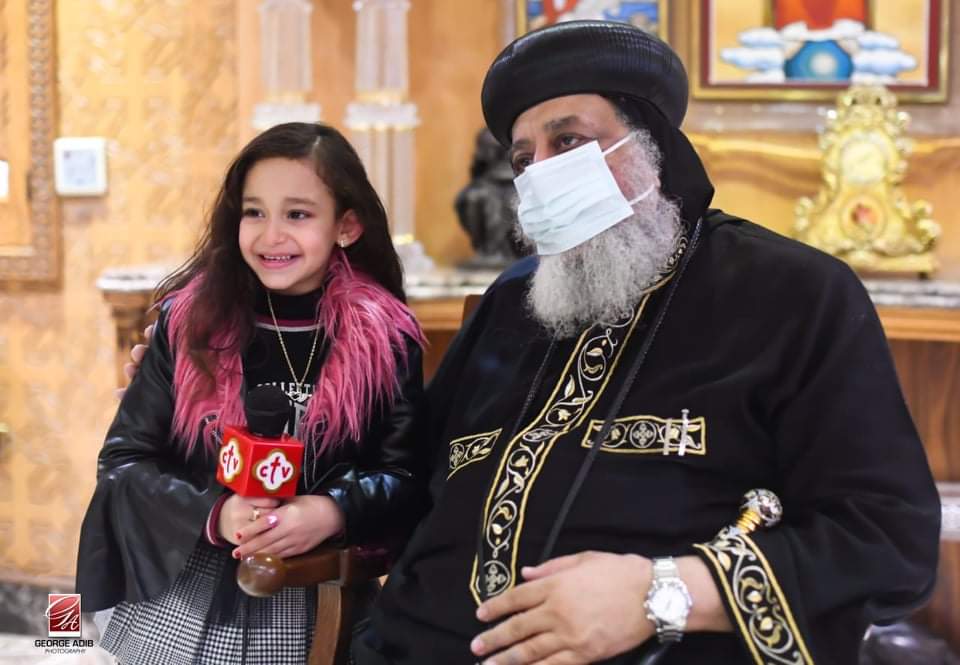