The desert monastery of Anba Bishoi in Wadi Natrun has, for the last two weeks, been the scene of an event which replicates one of the oldest and most revered traditions of the Church, and which takes place ever so often in the Coptic Orthodox Church.

This is the preparation or ‘cooking’ of the Holy Myron, the Chrism Oil, used in the Myron Sacrament, also known as the Holy Anointment or the Sacrament of Confirmation. The word ‘Myron’ is a Greek word which means ‘ointment’ or ‘fragrant perfume’. Anointment with Myron grants the seal of the Holy Spirit. The sacrament is granted to the baptised directly after baptism, through anointment with 36 crosses. The baptised then becomes a ‘temple of the Holy Spirit’.
Myron Oil is also used to consecrate new churches, altars, altar utensils, and icons. 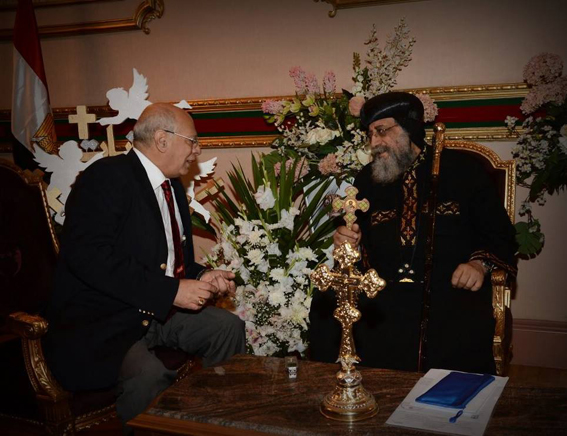 Back to the burial of Jesus Christ
On Tuesday 8 April Pope Tawadros II presided over the ceremony of preparing the Myron at Anba Bishoi’s, in which all 88 members of the Coptic Orthodox Church’s Holy Synod took part. The ceremony took off with a procession of bishops and clergy carrying the material needed for the Myron and heading to the church to the ringing of bells and joyful praises. Inside the church, the vessels—five huge crucibles—in which the holy oil would be cooked stood in front of the sanctuary. Once the canon of the Myron was read by Anba Raphail, Secretary-General of the Holy Synod, the cooking process began at the hands of the various bishops. Praises were sung and Bible readings pertaining to the holy oil in the Old and New Testaments were read. On Wednesday, a service was held to sanctify the oil.
Traditionally, Myron is prepared during Lent before Passion Week, and is completed on Sham al-Nessim, Easter Monday which should see the addition of the ‘yeast’ to the oil.
Tradition has it that the first who made the Myron were the Apostles from the fragrant oils which had been used for the burial of Jesus Christ and the sweet-smelling spices the women had brought to anoint the body of Jesus, but discovered He was risen from the dead.
When St Mark headed to Alexandria, he took with him some of the Myron made by the Apostles and used it in the Sacrament of the Chrism. The tradition was handed on to the successive patriarchs until Pope Athanasius (c. 298 – 373) who decided to remake the Myron in Alexandria. The original oil was, and still is today, used as ‘yeast’.
All new
Throughout the history of the Coptic Orthodox Church, 25 popes made the Myron; some of them more than once. Among them were Pope Kyrillos VI who was patriarch from 1959 to 1971 and has been recently canonised, and Pope Shenouda III (c. 1971 – 2012) who prepared it seven times during his papacy. The growing Coptic Orthodox congregation inside and outside Egypt generates more demand on the Myron, hence the need for preparing it more frequently and keeping the Church well-stocked on the holy oil.
This year, Myron is cooked for the 38th time in Church history, this time at the hand of Pope Tawadros II. But the Pope generated quite a stir when he announced the Church would make use of modern industry and technology to simplify the cooking of the Myron. Watani talked to Pope Tawadros about the issue.
The Pope began by expressing his joy at the event. Myron, he said, closely relates to the ‘new’: new-borns become new Christians and are reborn into a new life, new churches are consecrated, new altars and utensils. “The figure 38 is auspicious,” the Pope said. “It represents the number of years the sick man lay at the pool of Bethesda till Jesus gave him new health.” 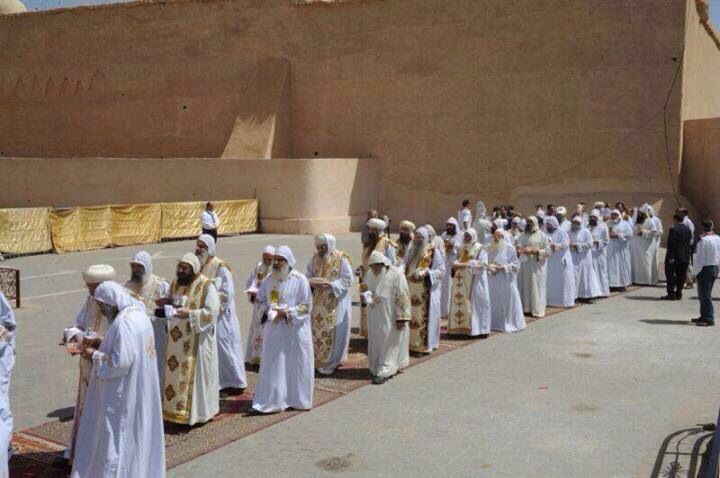 Modern technology
So, what is new this time? Watani asked Pope Tawadros.
“This time we have used modern technology to attain the utmost degree of purity in the oil, and at the same time to escape some of the arduous processes necessary for the Myron preparation in past times.
“The ingredients needed,” the Pope explained, “comprise 27 special oils and sweet spices mentioned in the book of Exodus and in the Psalms. Among them are the oils of cloves, sandalwood, liquid amber, and balsam. Some of the 27 ingredients are found in Egypt and some are imported from abroad while the pure olive oil comes from the produce of the Baramous Monastery in the Western Desert.  And because several of the ingredients are solid, they needed to be soaked or ground before the mixing and stirring; this process is what has been commonly denoted as ‘cooking’, a popular description but no Church term. The mixture of aromatic oils is then mixed with pure olive oil. Once the aromatic and essential oils were extracted to make Myron, we used to make the holy oil of rejoicing, the Ghalilaon, out of what remained of the original material.
“For the first time, we have this year bypassed the arduous step of the extracting the 27 aromatic oils. This was a time-consuming process that involved copious effort, huge 100 litre-crucibles, as well as other equipment. We bought the extract from international firms specialised in the process. For every oil we imported, we got a certificate verifying its dryness and purity.
“This new method,” the Pope said, “has the added value of allowing us to make a bigger quantity of Myron Oil since it simplifies the process.”
600 kilograms
The new process, however, does not involve ingredients remaining after the extraction process, so how would the Ghalilaon Oil be prepared? Pope Tawadros explained that a simple calculation showed that the ingredients allowed for the preparation of a quantity of Ghalilaon Oil that was around 1 per cent of the concentration of the Myron Oil. “So this time we prepared 300 kilograms of Ghalilaon with the same concentration,” he said.
Pope Tawadros reminded us that innovation was never a missing ingredient in the Church. He had taken part in the making of Myron Oil at Anba Bishoi’s with Pope Shenouda III during the years 1987, 1993, 1995, 2005, and 2008. “Every time,” Pope Tawadros said, “the technique differed one way or another, whether in the grinding, soaking, mixing or stirring processes. Pope Shenouda was keen on avoiding errors or troubles, and on using scientific means to reach the best results.
“Pope Shenouda used to cook Myron with the help of Father Georgious Attallah of St John’s in Covena, California who had been a professor at Cairo University’s Faculty of Science before he was ordained. It was Fr Attallah who helped us to contact the international companies specialised in the extraction of oils.”
This year, some 600 kilograms of Myron oil are being prepared. They stand in their vessels in front of the altar till Easter Monday, when the yeast is added. Myron Oil is thus all done, ready for packaging. It is left, however, in front of the altar throughout the Khamasseen, the fifty days following Easter that end with the Pentecost, when it is finally stored in flasks and sent to the different bishoprics.
Watani International
9 April 2014