Luxor police have been able to contain an attack against Copts and the church of the Archangel Michael in the village of al-Halla in Esna, Luxor, on the evening of 23 June 2022.

The attack came in the wake of the official legalisation of the 2003 church which had been operating without licence until it was granted legality last May. The church is a three-storey building that features neither dome nor spire.

A statement issued by the Diocese of Esna and Armant, and signed by Bishop Anba Youaqim, informed that the Interior Ministry stationed official guards at the church [a customary measure taken by the Ministry with churches nationwide to ensure their security] on the morning of 23 June.

Coptic eyewitnesses said that once the church became legal and guards were stationed at its entrance, a general rejection of the situation was fostered and egged on by fundamentalists among the village Muslims. “Thursday [23 June] evening,” said a Coptic villager to Watani, “a large crowd of Muslims gathered, some of them not from our village, screaming slogans hostile to Copts. They threw stones at our houses and set fire to Coptic-owned vehicles and motorbikes. We kept to our homes for safety’s sake; this led to no casualties.”

The guards outside the church attempted to deal with the rioting crowd but failed owing to the large numbers.

A bigger police force were quickly sent to Halla, and managed to bring the situation under control. A large number of rioters were caught. The police cordoned off the church and closed the streets leading to Coptic quarters for fear of a renewed attack the following day, Friday, after Muslim noon prayers. They also stationed squads near the main mosques [given that fundamentalists commonly use them to spearhead attacks against Copts following Friday noon prayers]. The police sent out warnings against any unlawful acts, stressing that such acts would be promptly dealt with.

“We have been worshipping at our [unlicensed] church of Archangel Michael since 2003 without any problems,” the village Copts insisted. “The village Muslims were well aware of it and no one ever objected. Now that the church has been legalised, the fundamentalists among them were furious. The told us ‘You’ve been worshipping here for years … why the official legality?’”

In the statement issued by the Diocese, Anba Youaqim thanked the police and all local security authorities for containing the situation at the village of Halla.

The church in Halla was legalised according to the Law for Building and Restoring Churches. Until the law was passed in Egypt in September 2016, it was next to impossible for Copts to obtain official licence to build or restore a church, leading many Copts to term these times “the crisis era”. Copts, who direly needed churches in view of the growing congregations and declining conditions of existing churches, resorted to circumventing the law and building churches without licence. The 2016 law stipulates a straightforward, time limited legal procedure to obtaining licence to build or restore a church or building affiliated to it, and includes provisions for legalising already existing unlicensed churches and Church-affiliated buildings. 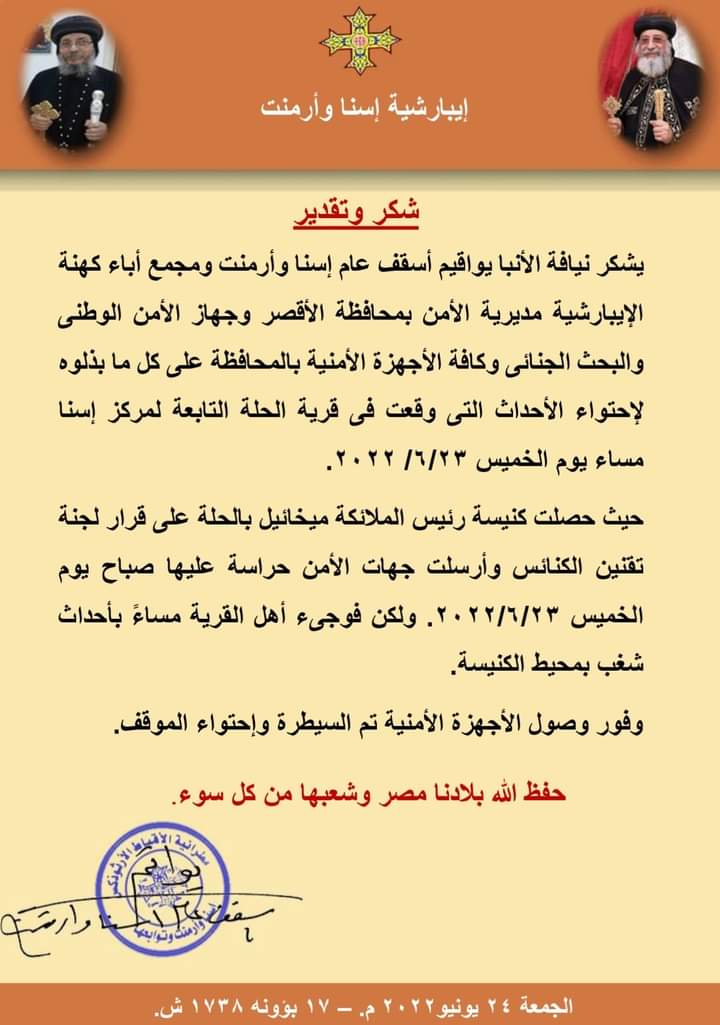