“Lord, I love you”. These we the last words spoken in Italian by Pope Emeritus Benedict XVI’s on his deathbed hours before he passed away peacefully at 9:34am on Saturday 31 December 2022, in the Mater Ecclesiae Monastery in the Vatican. These last words were reported to Vatican News by his longtime personal secretary, Archbishop Georg Gänswein who said that they were uttered in Italian in a soft but clearly distinguishable voice. He had received the sacrament of anointing the sick on 28 December. 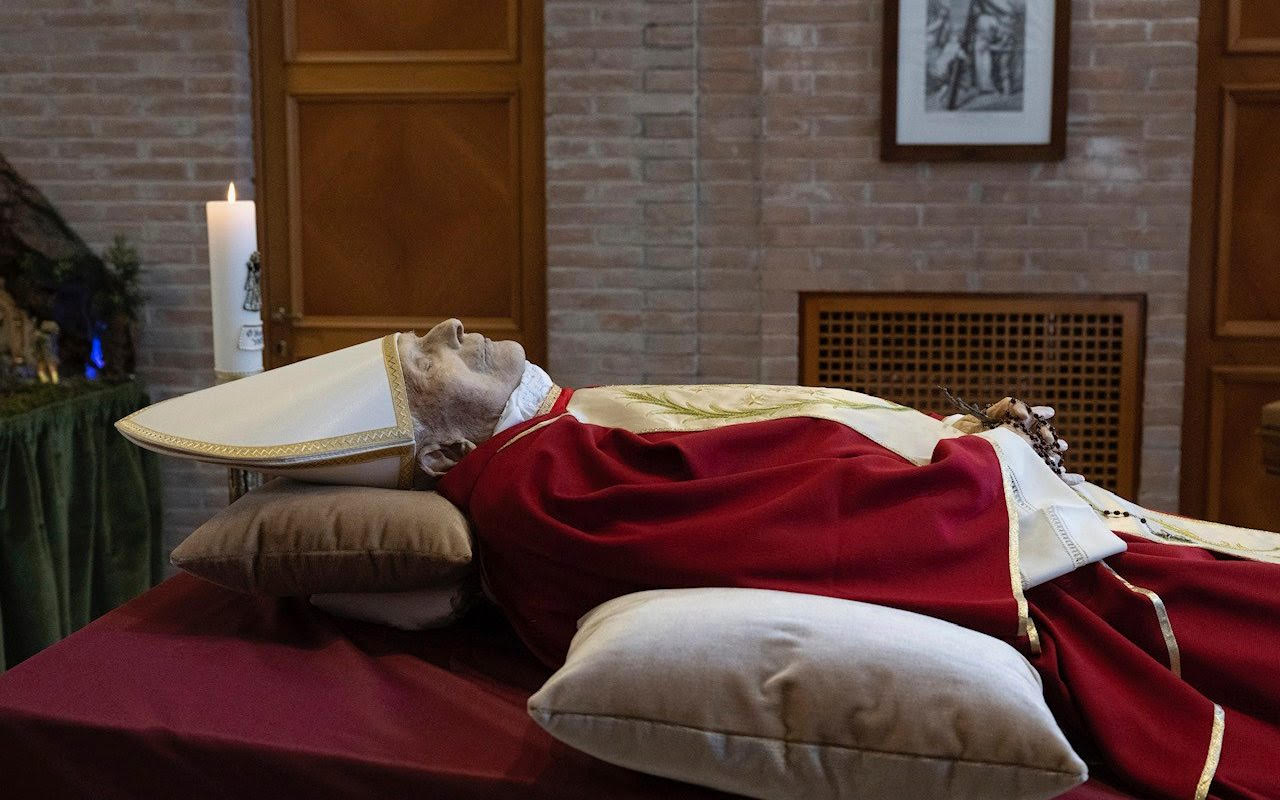 On 2 January 2023, the body of the Pope Emeritus was moved to St Peter’s Basilica where he lay in state, resting on a catafalque, his head on a pillow, dressed in red vestments and a cream-coloured mitre, his hands clutching a rosary, flanked on one side by a Christmas tree and on the other by a Nativity scene. Thousands upon thousands filed by to pay their last respects. 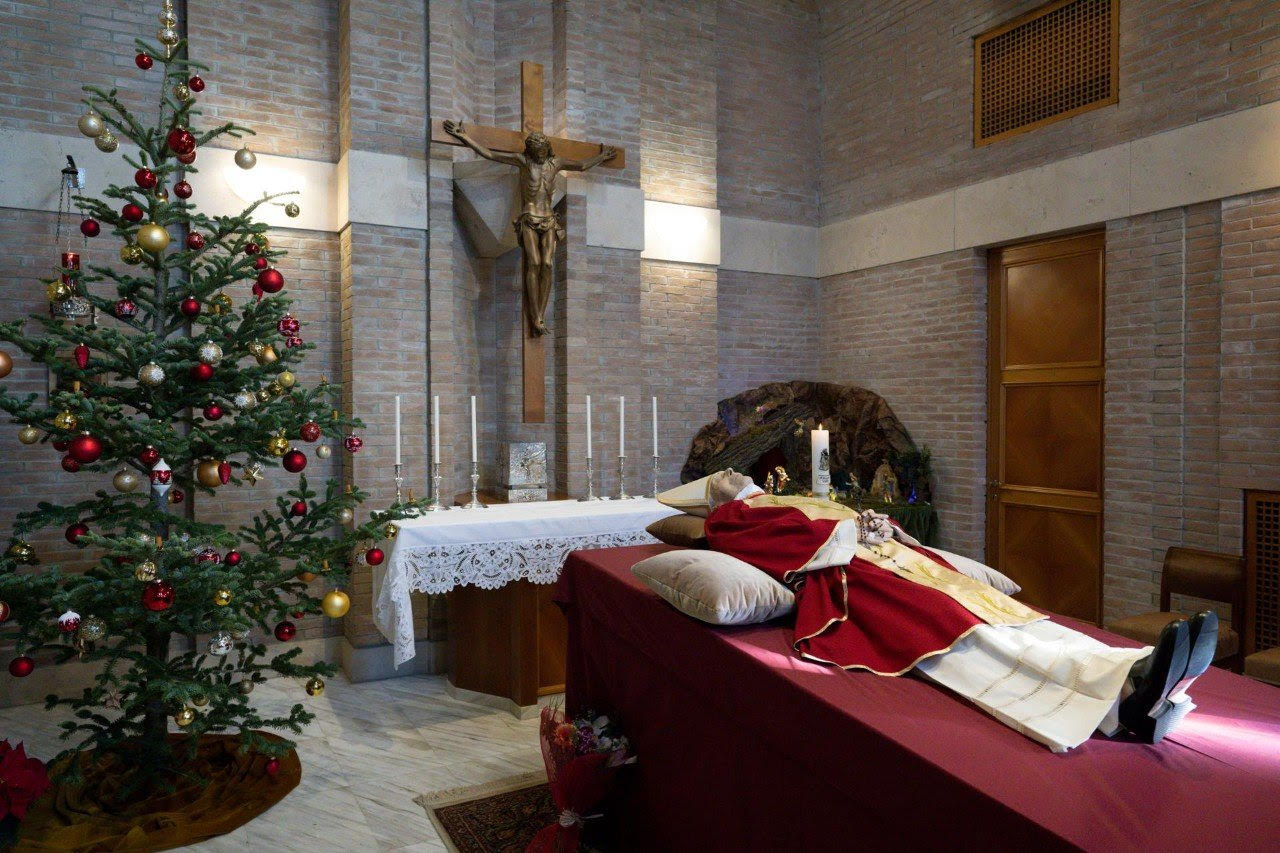 On 5 January, Pope Francis  will preside over a solemn funeral Mass in St Peter’s Square. In accordance with the wish of the Pope Emeritus, the funeral  will be carried out under the sign of simplicity. 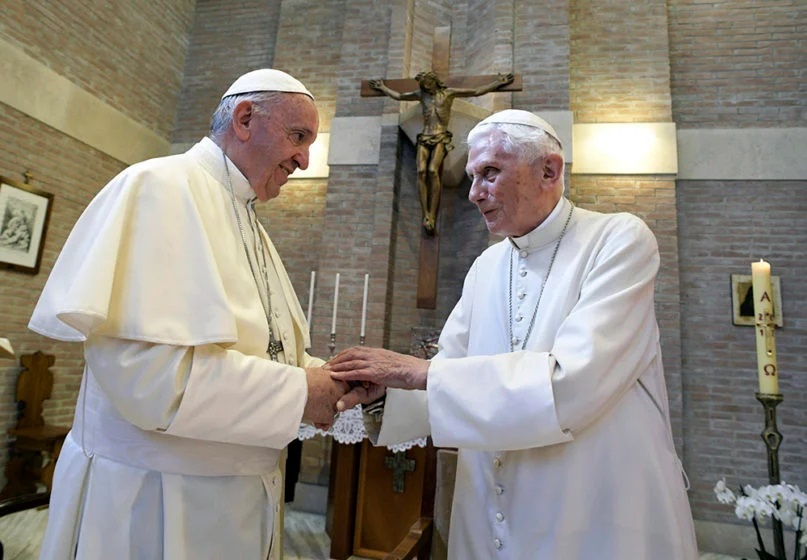 Pope Francis, 86, paid tribute to his predecessor, describing him as “beloved”, and remembering him as a noble and kind man of faith. “Let us all join together, with one heart and one soul, in thanking God for the gift of this faithful servant of the Gospel and of the Church and to the world … we are grateful for all the good he accomplished, and above all, for his witness of faith and prayer … Only God knows the value and the power of his intercession, of the sacrifices he offered for the good of the Church.”

As tributes flowed in from the world over, Pope Tawadros and the Coptic Orthodox Church issued a statement mourning Pope Emeritus Benedict XVI “who faithfully served the Roman Catholic Church in several positions. He was an excellent successor to an excellent predecessor.

“We offer our condolences to our brother and friend His Holiness Pope Francis, and all the clergy and congregation of the Catholic Church around the world.” 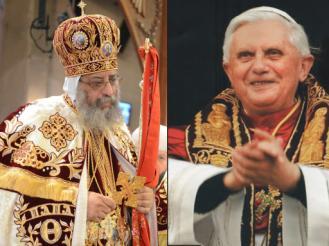 Born Joseph Aloisius Ratzinger in April 1927 in the small Bavarian village Marktl am Inn, he was the third and youngest child of Joseph and Maria Ratzinger. In June 1951, he and his older brother, Georg, were ordained priests.

Ratzinger finished his doctoral studies in theology and became a university teacher and vice president at the prestigious University of Regensburg in Bavaria. His reputation as an intellectual prompted an invitation to serve as an expert at the Second Vatican Council. He rapidly distinguished himself as an eminent theologian.

In 1977, Pope Paul VI named Ratzinger Archbishop of Munich and Freising and, later that same year, gave him the cardinal’s red hat. He was one of the closest collaborators of St [Pope] John Paul II (pope from 1978 to 2005) whom he succeeded as pope in April 2005 when he was elected to the papacy taking the name Benedict XVI.

On 11 February 2013, the 85-year-old Benedict XVI shocked the world with a Latin-language announcement of his retirement, becoming the first pope in 600 years to do so. He cited his advanced age and his lack of strength as unsuitable to the exercise of his office.

A brilliant theologian and fervent guardian of dogma, the pontificate of Benedict XVI, was marked by a profound understanding of the challenges to the Church in the face of growing ideological aggression, not least from an increasingly secular Western mindset, both within and outside the Church.

Benedict XVI believed that Christians should engage with modernity but not be changed by it, for “in a decaying world [faith] is the only thing left to give shape to life.”

To those who reply that this emphasis upon passionate faith contradicts reason, Benedict XVI replied that the very thing that defines Europe is the blending of faith and reason in the marriage between Christianity and Greek philosophy. The Christian God would never ask us to do anything unreasonable. His books, especially his three-volume Jesus of Nazareth which he described as his personal quest for Jesus, strongly testifies to his use of reason and meticulous research to guide his ardent faith. According to Ignatius Press which published the book, “Benedict brings to his study the vast learning of a brilliant scholar, the passionate searching of a great mind, and the deep compassion of a pastor’s heart. In the end, he dares readers to grapple with the meaning of Jesus’s life, teaching, death, and resurrection.” 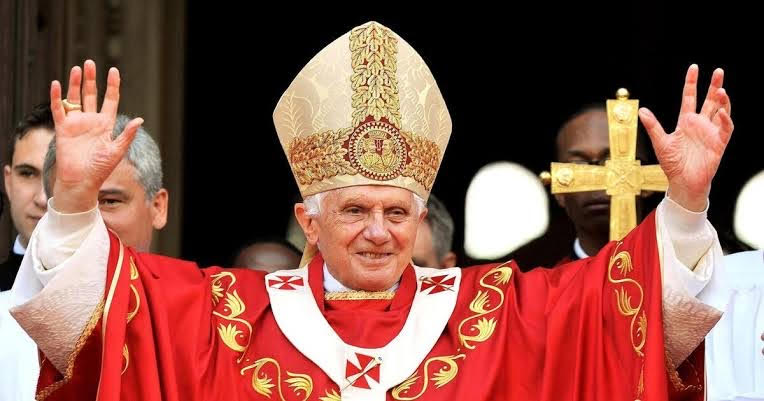 The Pope Emeritus never raged against the dying of the light. In 1969, Benedict predicted in a radio address that the Christian Church would become smaller and poorer, but also “more spiritual”. Secular society might be richer but “more lonely”, and it will find in this “little flock of believers” something new: the faith, cherished and preserved.

The Vatican published the Spiritual Testament of Benedict XVI, written in Italian on 29 August 2006, one year and four months into his pontificate. Each pope writes a spiritual testament to be made public only after his death.

If in this late hour of my life I look back at the decades I have been through, first I see how many reasons I have to give thanks. First and foremost I thank God himself, the giver of every good gift, who gave me life and guided me through various confusing times; always picking me up whenever I began to slip and always giving me again the light of his face. In retrospect I see and understand that even the dark and tiring stretches of this journey were for my salvation and that it was in them that He guided me well.”

He went on to profusely thank his parents “who gave me life in a difficult time and who, at the cost of great sacrifice, with their love prepared for me a magnificent abode that, like clear light, illuminates all my days to this day.”vHe mentions his father’s lucid faith and the profound devotion and great goodness of his mother. “My sister has assisted me for decades selflessly and with affectionate care; my brother, with the lucidity of his judgments, his vigorous resolve and serenity of heart, has always paved the way for me … to find the right path.” 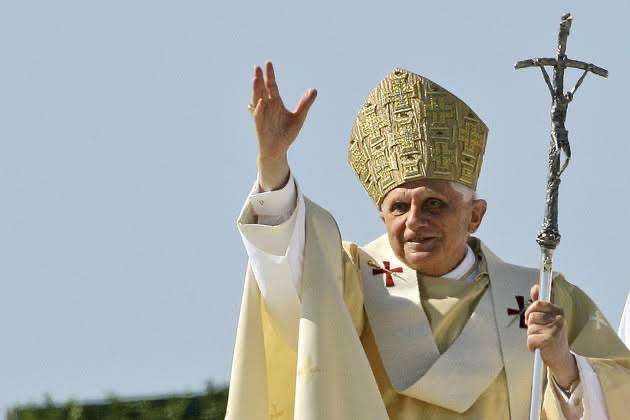 Benedict XVI thanked from his heart “the many friends, men and women, who He always placed at my side; for the collaborators in all the stages of my journey; for the teachers and students He has given me. I gratefully entrust them all to His goodness. And I want to thank the Lord for my beautiful homeland in the foothills of the Bavarian Alps, in which I have always seen the splendour of the Creator Himself shining through. I thank the people of my homeland because in them I have been able again and again to experience the beauty of faith. I pray that our land remains a land of faith, and I beg you, dear countrymen: Do not let yourselves be turned away from the faith.

“And finally I thank God for all the beauty I have been able to experience at all the phases of my journey, especially, however, in Rome and in Italy, which has become my second homeland.

“To all those whom I have wronged in any way, I heartily ask for forgiveness.

“What I said before to my countrymen, I now say to all those in the Church who have been entrusted to my service: Stand firm in the faith! Do not let yourselves be confused! It often seems that science — the natural sciences on the one hand and historical research (especially exegesis of Sacred Scripture) on the other — are able to offer irrefutable results at odds with the Catholic faith. I have experienced the transformations of the natural sciences since long ago and have been able to see how, on the contrary, apparent certainties against the faith have vanished, proving to be not science, but philosophical interpretations only apparently pertaining to science; just as, on the other hand, it is in dialogue with the natural sciences that faith, too, has learned to understand better the limit of the scope of its claims, and thus its specificity. It is now sixty years that I have been accompanying the journey of Theology, particularly of the Biblical Sciences, and with the succession of different generations I have seen theses that seemed unshakable collapse, proving to be mere hypotheses: the liberal generation (Harnack, Jülicher etc.), the existentialist generation (Bultmann etc.), the Marxist generation. I saw and see how out of the tangle of assumptions the reasonableness of faith emerged and emerges again. Jesus Christ is truly the way, the truth and the life — and the Church, with all its insufficiencies, is truly His body.

“Finally, I humbly ask: Pray for me, so that the Lord, despite all my sins and insufficiencies, welcomes me into the eternal dwellings. To all those entrusted to me, day by day, my heartfelt prayer goes out.”