Almost a week from today, most Churches in the world will celebrate Christmas on 25 December. The Coptic Orthodox Church, however, adheres to its Coptic calendar and celebrates Christmas on 29 Kiahk which coincides with 7 January.

The discrepancy in dates has long irked Copts in the Diaspora, who live in communities where Christmas is on 25 December. For them, this is not Christmas according to their Mother Church’s ritual, whereas 7 January is for them a normal working day that leaves not much space or energy for celebration. They have long demanded of the Coptic Church to do something about the predicament they face year in year out.

This year, Copts in the diocese of Los Angeles, may have a way out of the difficult situation.

“2- This is to confirm that the Eucharistic Liturgy of the Nativity Feast should be concluded after midnight, and Holy Communion to start after midnight.

“Therefore, to respond to the pastoral needs and concerns of those faithful members of the Church, it is permitted for our parish churches, on condition that there is pastoral need, to have ADDITIONAL celebration of the Feast, starting with Vespers and Midnight Praise on the evening of 24 December, and Matins and Eucharistic liturgy according to the rite of the Nativity Feast on the morning of December 25 without breaking the Advent fast.

“Our Lord grant is all the joy of His Holy Nativity Feast.”

No sooner had Anba Serapion’s message become public than Coptic social media erupted in scathing criticism of the Metroplitan’s decision, accusing him of trifling with venerable Church traditions which, they said, should never be corrupted. The online threads and controversy over the issue descended into downright offensive language.

On 11 December, the bishops and clergy of the Diocese of Los Angeles, Southern California, and Hawaii on issued a statement proclaiming “love, trust, and full support for His Eminence Metropolitan Serapion and our affirmation of the message concerning the additional celebration of the Feast of Nativity on December 25 to meet an urgent and necessary pastoral need within the Diocese.”

On the evening of Wednesday 11 December. Pope Tawadros took up the issue in his sermon during his weekly prayer meeting.

The Pope started off by pointing out that, since Anba Serapion’s message became public, it has been criticised on social media by persons who may or not be impacted by the Metropolitan’s decision in any way; the debate frequently breaking all barriers of respect.

The message, the Pope explained, was about celebrating Coptic Christmas as usual on 29 Kiahk but, owing to pastoral needs and concerns, an additional celebration may be held on 25 December without breaking the Advent fast. It was not, he insisted, a change of the date the Coptic Church celebrates the Nativity of Christ.

The Church, Pope Tawadros said, has over the ages practiced versatility to answer pastoral needs. For centuries, Mass used to be held on Sunday. In modern years, however, Sunday ceased to be a holiday, Friday became the national weekend but, at the same time, a few sectors of the congregation had their weekly holiday on different days. So the Coptic Church began to celebrate Mass every day, not only on Sunday. Sunday School classes and various services and meetings are now held on Friday, the national weekend for the majority of the congregation.

Holy matrimony service was originally part of Matins during Mass in the morning, the Pope said, but the Church shifted it to the evening to answer the needs of the congregation.

Coptic Mass, Pope Tawadros said, includes seasonal prayers for the River Nile, the plants, and the winds. These originated out the needs of Egypt which is an agricultural land dependent on the Nile. But Copts in other countries might need to pray for other rivers or for rain.

Different congregations have different pastoral needs, the Pope said, and the Church must answer them. Pastoral arrangements are made between the bishop and the priests, they are discussed by the Holy Synod of the Coptic Church, and decisions are taken in consultation with the Pope.

The Bible says the Sabbath was made for man and not man for the Sabbath. Pope Tawadros reminded. The Church’s liturgical services were likewise made for man, not the contrary.

The Pope asked those who criticised Anba Serapion’s decision so harshly, claiming to be speaking on behalf of the Copts in general—one blogger actually posted: “We are and the entire Coptic people”—to ask themselves who authorised them to represent the Copts? He finally asked them to pay attention to their own salvation and lives.

“I wanted to share all of this with you in order that there would be no offense found among the Church,” he concluded. 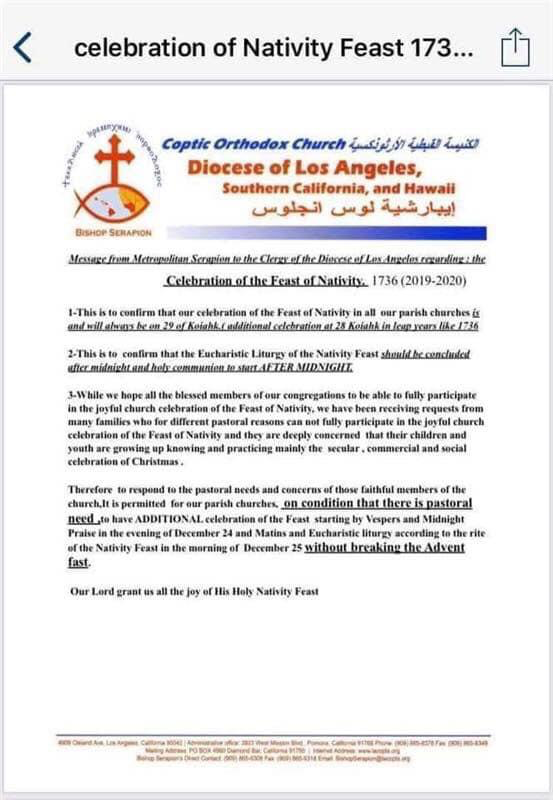