Pope Tawadros II of Alexandria, Patriarch of the See of St Mark, has on Saturday 7 July joined Pope Francis and some 18 Orthodox and Catholic Middle East Church patriarchs in the Italian coastal city of Bari to pray for Christians of the Middle East. 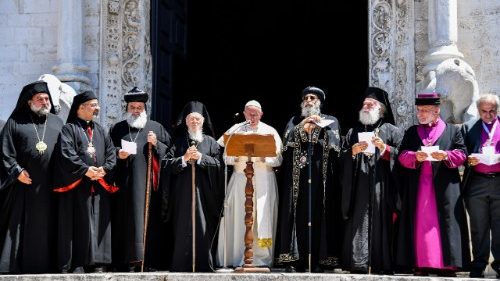 The choice of location for the one-day event, the city of Bari in the south Adriatic, carries a deep symbolic meaning in terms of Catholic-Orthodox relations. Orthodox Christians are devoted to Saint Nicholas, the patron saint of Bari whose relics are kept in the city’s basilica, and the city has often been called a “window to the Middle East”. It has historically been at the vanguard of ecumenical and interreligious dialogue, a city projected toward the Mediterranean Sea where, for centuries, religions have both met and collided.
Cardinal Kurt Koch, President of the Pontifical Council for Promoting Christian Unity, had said a few days before the event was held: “The Pope wants to provide the conditions for Christians to remain in the Middle East. The patriarchs from the region tell us: we are glad that you take in our refugees, but don’t tell them to come. Help them so that they can remain in their land.”
Cardinal Koch said he feared that Christians would continue to flee the Middle East, unless peace is re-established. He recalled that Christians in a century have plunged from being 20 per cent of the population to being a mere 4 per cent today.
For his part, Cardinal Leonardo Sandri, Prefect of the Congregation for the Eastern Churches, had said there would be no final ‘joint declaration’. “But the words of Pope Francis can be of guidance, an appeal for the situation of persecuted Christians and the lack of peace. No concrete decision will be made, but we hope that those responsible for the situation in the world can listen. This is for them a call to consciences to seek not the abuse and force of violence but a political solution.”

This was not Pope Francis’s first prayer initiative for peace in the Middle East.
On 7 September 2013, he had called for a day of prayer and fasting for peace in Syria. But the Bari meeting was the first of its kind, the only time so many Orthodox patriarchs from the Middle East have met with the Pope.
The Saturday 7 July event began as Pope Francis arrived at Bari by helicopter, and headed to the Basilica of St Nicholas, which is run by a Dominican community. He warmly embraced the religious leaders gathered there and, together, the group prayed before the relics of St Nicholas and lit a single candle representing their unified commitment to ending war in the Middle East.
The first part of the event involved an ecumenical prayer for peace that took place on the shoreline in Bari looking out toward the Middle East, a region which the pope described as a keeper of the Christian traditions “to be preserved to the utmost of our ability, for in the Middle East our very souls are rooted,” he said.
To get there from the basilica, the popes and patriarchs rode an open bus, waving to the cheering crowd.
Pope Francis described Christians as “the light of the world,” even in dark moments of history, when “they refuse to be resigned to the encircling gloom but instead feed the wick of hope with the oil of prayer and love.” 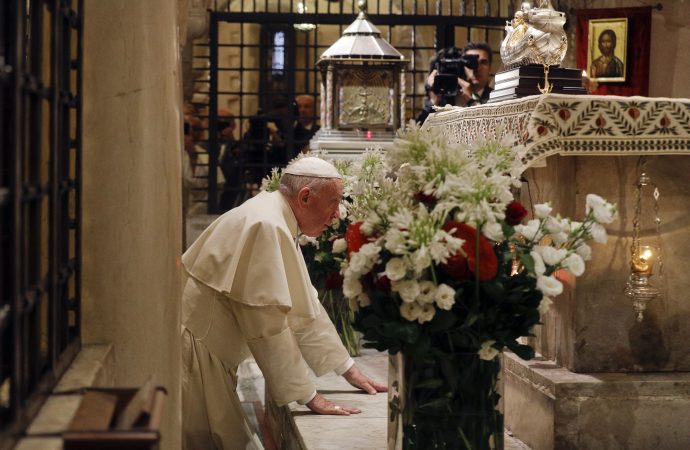 “This region [the Middle East] so full of light, has in recent years been covered by dark clouds of war, violence and destruction, instances of occupation and varieties of fundamentalism, forced migration and neglect. All this has taken place amid the complicit silence of many,” Pope Francis said during the ecumenical prayer.
The pope expressed fear that the Christian community in the Middle East might disappear, “disfiguring the face of the region,” which is the cradle of Christianity. “We have already lit, before St Nicholas, the ‘one-flame lamp’, a symbol of the one Church,” Pope Francis said.
“Today, as one, we want to kindle a flame of hope,” he added.
“Like lights in the darkness, Christians facing persecution in the Middle East are resilient against the most staggering odds,” Pope Francis said, condemning the “complicit silence” of many to anti-Christian persecution.
“The Middle East has become a land of people who leave their own lands behind,” the Pontiff said.
“Indifference kills, and we desire to lift up our voices in opposition to this murderous indifference,” the Pope said as he stood flanked by 19 other religious leaders.
“We want to give a voice to those who have none, to those who can only wipe away their tears. For the Middle East today is weeping, suffering and silent as others trample upon those lands in search of power or riches,” he added.
“For all our suffering brothers and sisters, and for our friends of every people and creed, let us say again and again: Peace be upon you!” the Pope said. “With the Psalmist, let us offer this prayer in a special way for Jerusalem, the holy city beloved of God and wounded by men, for which the Lord continues to weep: Peace be upon you!” 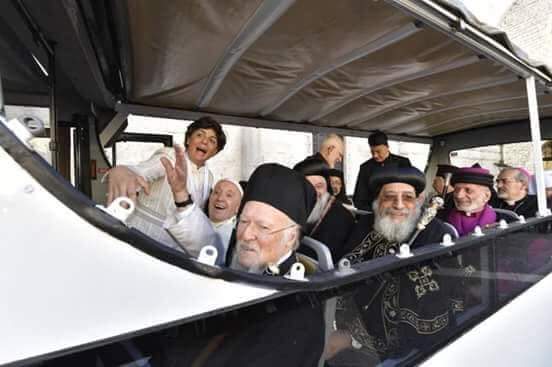 A prayer was said by each of the attending patriarchs with the faithful on the seafront of Bari.
Pope Tawadros started with the Prayer of Thanksgiving, thanking the Lord for the Bari meeting, and asking for: “Your peace to reign in our hearts.” He went on to pray for all those who were martyred in the name of Christ, also for the sick and injured everywhere. He invoked the intercession of the Holy Virgin, the Mother of God, to plead with the Lord to grant peace and calm to all regions of conflict; and to drive away Satan, the origin of all evil, from the lives of the faithful. “We ask You, O Lord, to fill our hearts with joy, while we are confident that Your eye watches over us from the beginning of the year to its end. We sing with David the Psalmist: The Lord is my light and my salvation, who shall I fear? The Lord is the strength of my life, of whom shall I be afraid?”
The second part of the Bari event included a private dialogue between the religious leaders, held behind closed doors in the Basilica of St Nicholas, during which each outlined his proposal for peace in the Middle East. At the end of the meeting, when the Basilica doors were reopened, Pope Francis made another address, reflecting on the Middle Eastern origins of the Christian tradition; “Jesus came from the Middle East,” he said. He talked of the commitment undertaken by the religious leaders to walk, pray, and work together “in the hope that the art of encounter will prevail over strategies of conflict”. 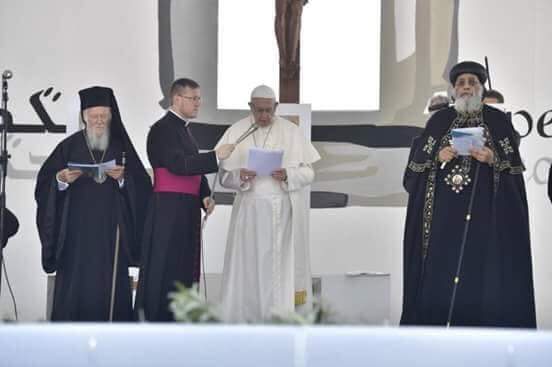 “Beloved Middle East, peace be upon you”

Pope Francis concluded his word by evoking the sign of the doves released by the prelates, handed to them by children. “For the sake of the children who have spent most of their lives looking at rubble instead of schools, hearing the deafening explosion of bombs rather than the happy din of playgrounds…may the longing for peace rise higher than any dark cloud. May the Middle East be an ark of peace, not an ark of war,” he prayed. 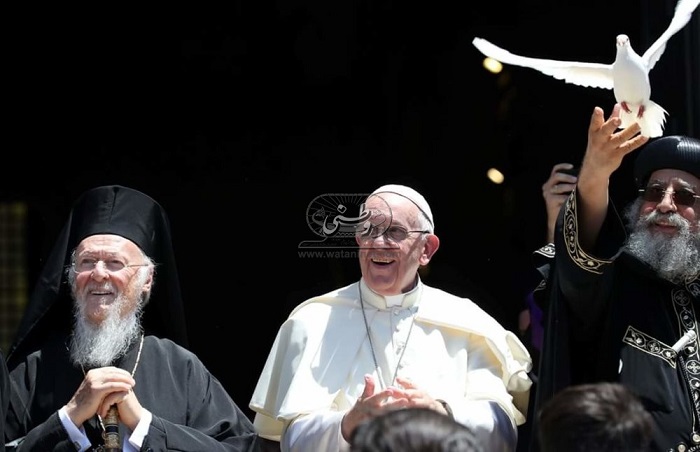 “Beloved Middle East, may you see dispelled the darkness of war, power, violence, fanaticism, unfair gains, exploitation, poverty, inequality and lack of respect for rights. May peace be upon you (Ps 122:8), may justice dwell within your borders, and may God’s blessing come to rest upon you”. 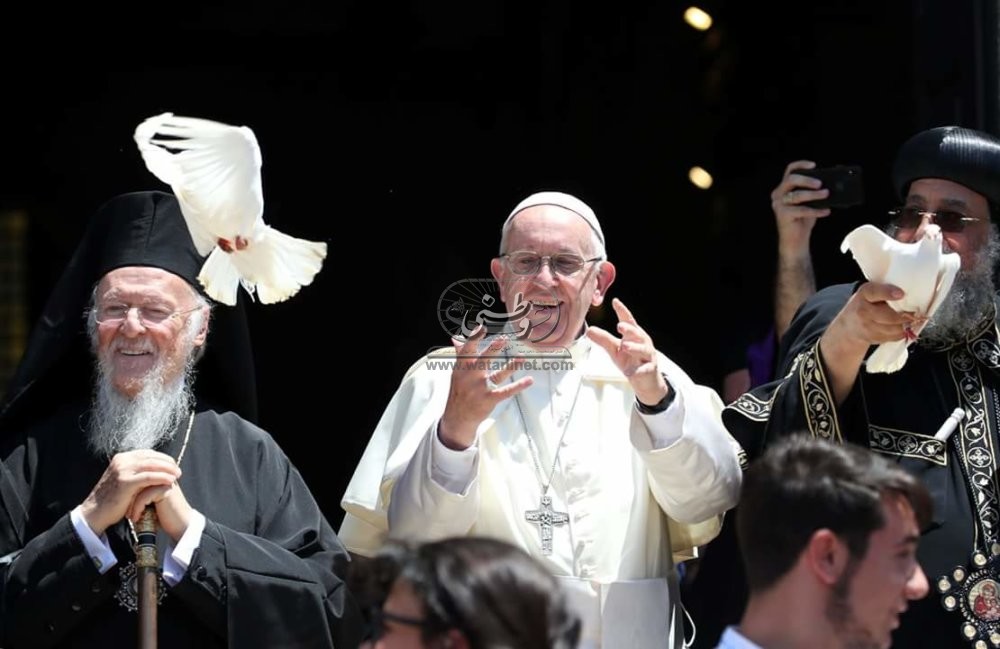