Pope Tawadros reassures congregation about his health, thanks President Sisi

In a short talk with MeSat satellite channel this morning at St Mark’s Cathedral in Abbasiya, Cairo, Pope Tawadros reassured the Coptic public about his health. The Pope said the extreme exhaustion he felt during Christmas Eve Midnight Mass last evening owed to tiredness following an influenza attack last week, added to a charged workload before Christmas. Copts celebrate Christmas on 7 January.

The Pope said he would go to hospital for a medical checkup to ensure his health was all right.

Pope Tawadros spoke about the visit of President Sisi to the Cathedral of the Nativity of Christ on Christmas Eve to wish Copts and Pope Tawadros a happy Christmas. This visit has become an annual tradition keenly upheld by the President since the first year of his presidency, making him the first Egyptian head of State to do so; it is greatly anticipated and welcomed by the Copts.

Last evening, President Sisi spoke of the timeless bond between Copts and Muslims, and of the strong friendship between him and Pope Tawadros for whom he addressed warm hearted praise. He also spoke of the current economic hardship in Egypt, but asked the public not to fear because “God is there; He will never abandon us.” This is a phrase commonly used by Copts; it is thought to have been popularised by the late Pope Shenouda III (patriarch from 1971 to 2012).

The Pope had asked for a chair to sit down as he said his sermon, since he was visibly too tired to remain standing. He looked weak, and he later let Anba Danial, Metropolitan of Maadi and Secretary-General of the Holy Synod, to preside over Mass in his stead. He was handed a glass of water with sugar to pep him up.

President Abdel-Fattah al-Sisi called the Pope this morning to ask about his health; Pope Tawadros replied by reassuring him and thanking him for his concern. 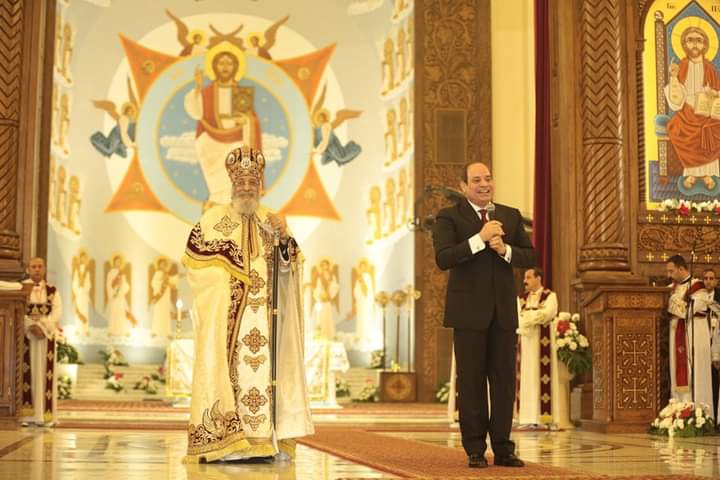 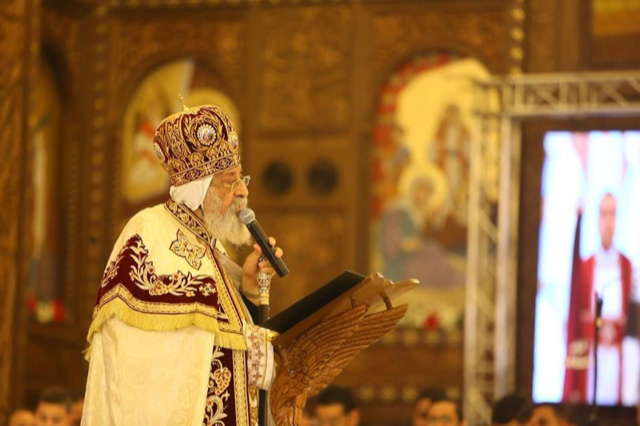