“In 2014, dear Pope, I saw you and asked you to visit France. Your reply was: ‘What’s that about France?’ I said: ‘It’s just around the corner, Your Holiness, and is home to many who love you. Today, dear Pope, do you agree with me?” That was a young woman from the Coptic congregation in Paris, and her question was addressed to Pope Tawadros II who was on his first pastoral visit to France. The Pope’s answer was a resounding, firm: “I agree”, upon which the congregation broke into booming applause. 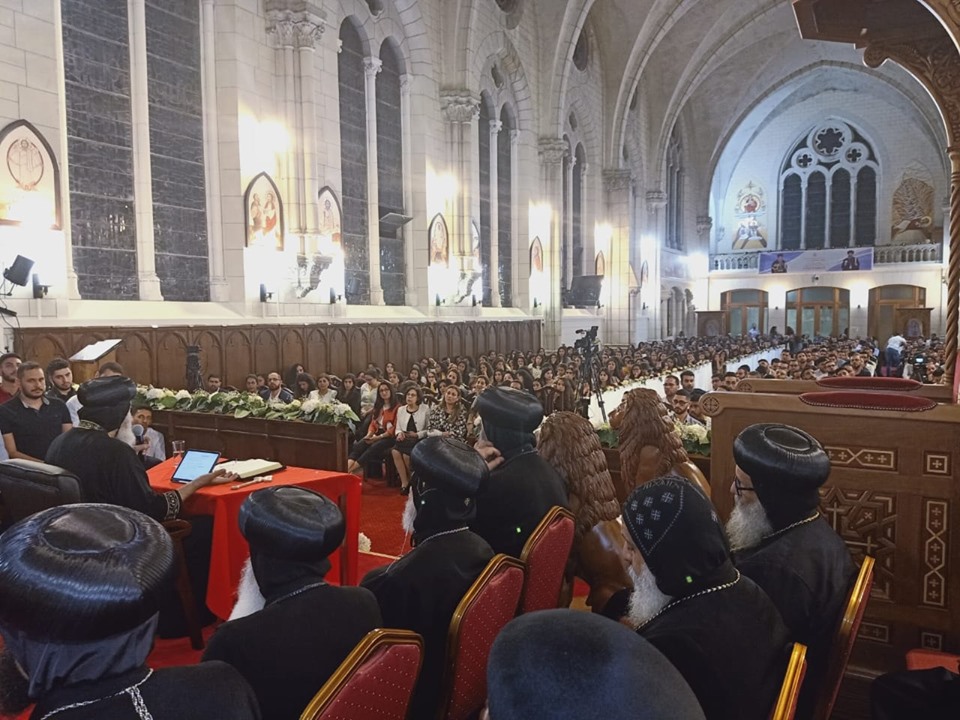 The Pope’s first pastoral visit to France, which started on 9 October 2019, is the first in a number of visits to other Coptic parishes in Europe. Egypt’s Ambassador to France, Ehab Badawi; and Egypt’s Consul-General in Paris, Sherif al-Diwany had both been on hand to receive him at Charles de Gaulle Airport upon his arrival.

Accompanying Pope Tawadros are Anba Danial, Bishop of Maadi and Secretary-General of the Coptic Orthodox Holy Synod; Anba Mikhail, Bishop of Hadayeq al-Qubba, Waili, and Abbassiya; together with a number of priests and deacons, including papal secretary Fr Kyrillos Boshra and Deacon Ramy Rizq.

Anba Marc, Bishop of Paris and Northern France welcomed Pope Tawadros at the diocese headquarters in Draveil. Draveil is a commune in the southern suburbs of Paris, located some 19km from the centre of the city. There, the Pope offered Thanksgiving prayer at the Cathedral of the Virgin Mary and Archangel Raphael.

Education on the agenda

While in France, Pope Tawadros made a few official visits in parallel to his pastoral activity. 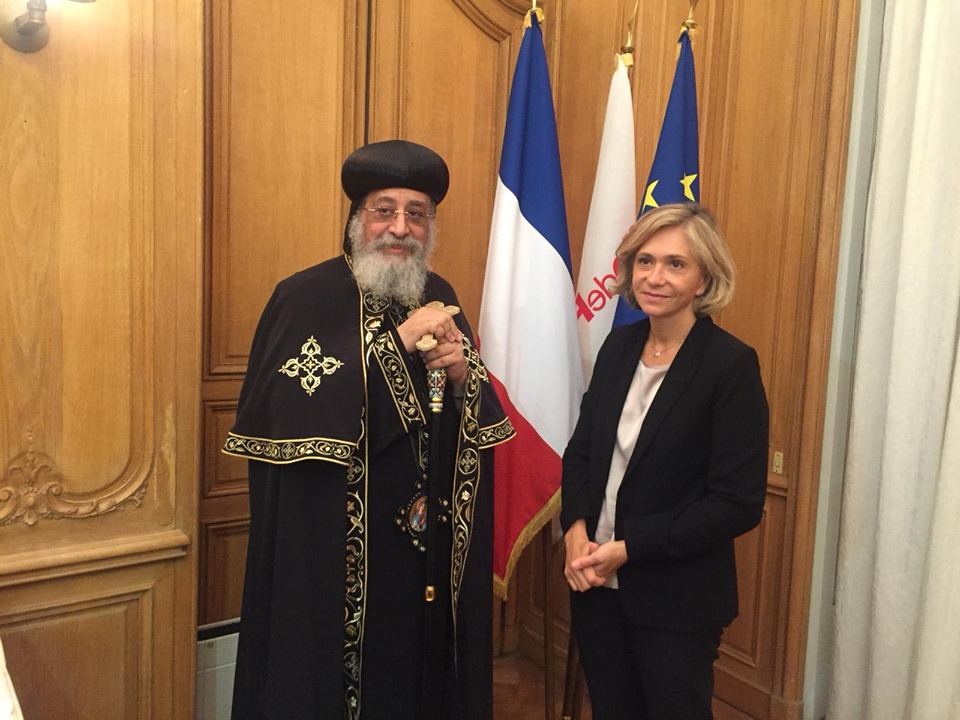 He was received by the President of the Regional Council of Île-de-France, Valérie Pécresse, in the city of Paris. Their dialogue centred on the significance of education and the support that could be offered to Egypt in this domain. Noteworthy is that during the official visit paid to Egypt by President Emmanuel Macron in January 2019, he was received by Pope Tawadros at St Mark’s papal headquarters in Abbassiya, Cairo, the discussions between President and Pope focused on education as the key to build productive, advanced societies. President Macron had started by saying that his visit to Pope Tawadros reflected how much the French people respected the Coptic Orthodox Church and its role in both the history and future of Egypt. The President and Pope agreed that education was vitally important, with President Macron insisting it was a foremost battle in which his country wished to support Egypt. 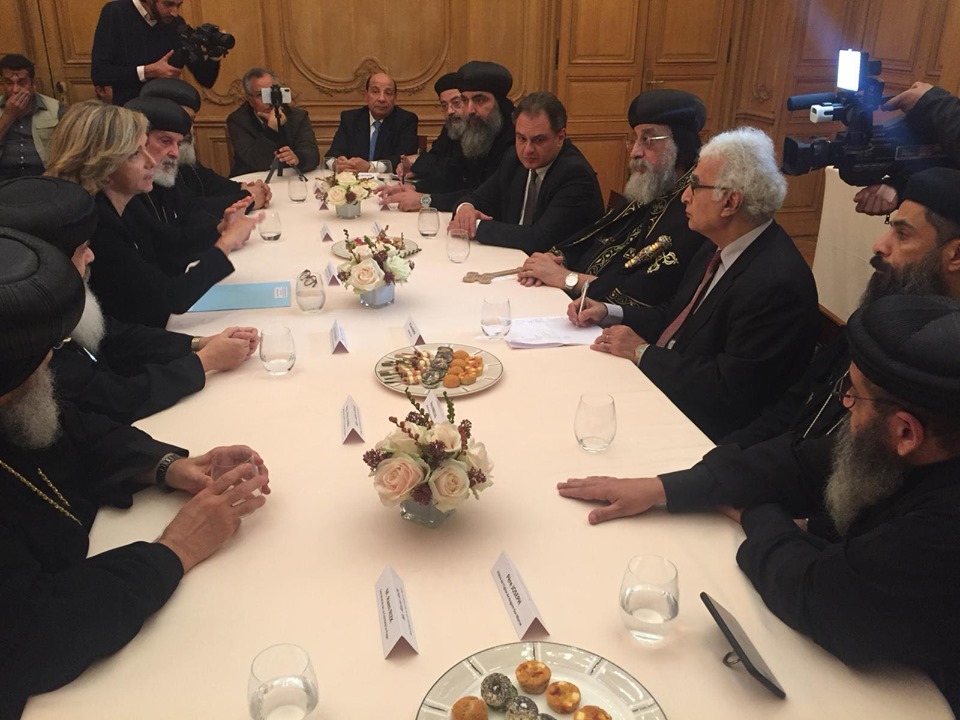 Pope Tawadros was received at the Egyptian Embassy in Paris by Ambassador Ehab Badawi. The Pope expressed his happiness at being there, and his admiration of the beautiful embassy building and ambassador’s residence. 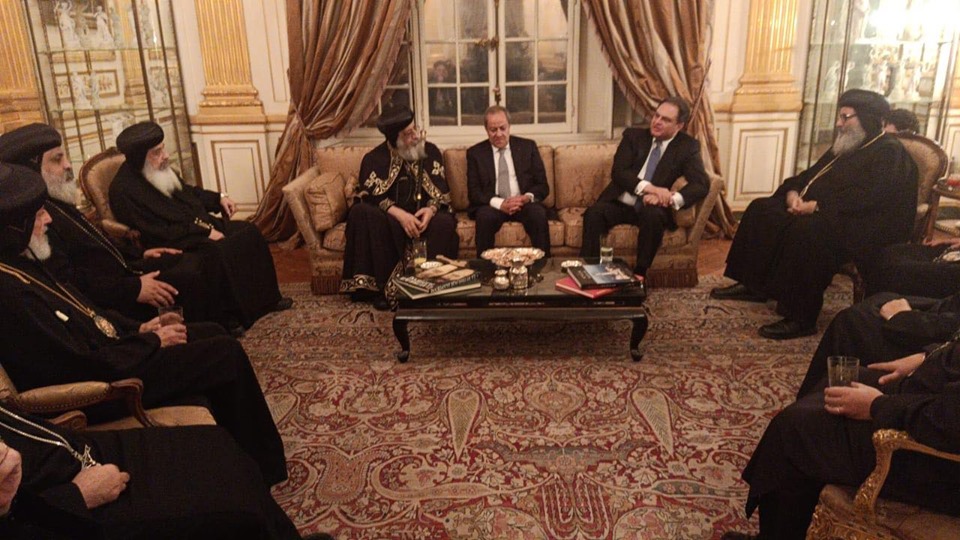 He thanked Ambassador Badawi for his warm cordiality, and all the Embassy staff for receiving him. In attendance were Jean-Christophe Peaucelle, Advisor for Religious Affairs in the French Ministry of Foreign Affairs; and Mounir Fakhry Abdel-Nour, Egypt’s former Minister of Trade and Industry. Mr Badawi welcomed Pope Tawadros, and praised the Coptic Orthodox Church for its renowned patriotic stances that have always placed Egypt first and foremost. 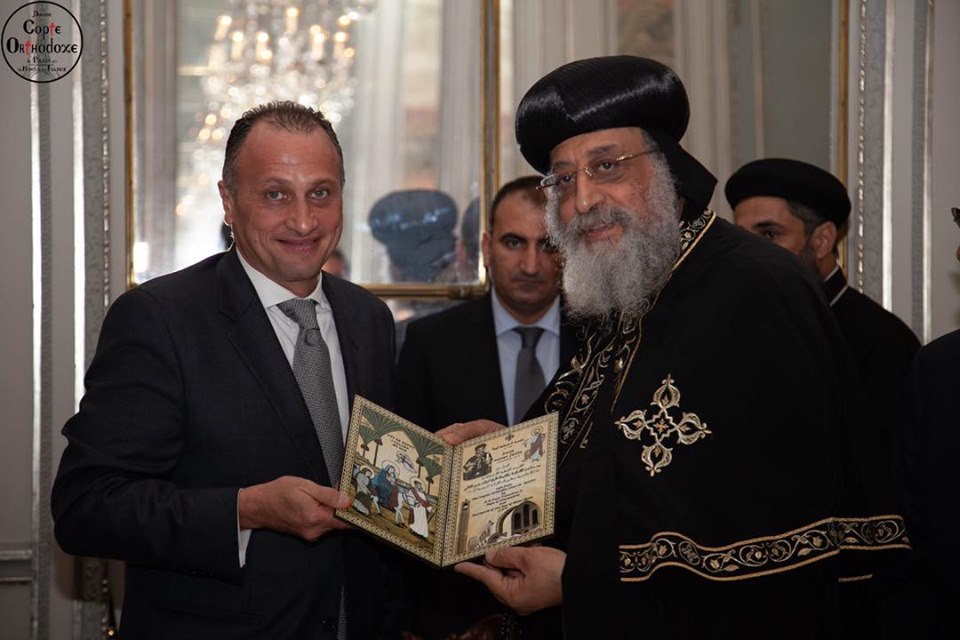 “Egypt and France have always had strong and deep relations,” Pope Tawadros noted in an interview with Egyptian television on the sideline of his French visit.

“Many Egyptian writers and intellectuals travelled to, studied in, and wrote about France, not least being Tawfik al-Hakim (1898 – 1987), one of the pioneers of the Arabic novel and drama,” the Pope said. 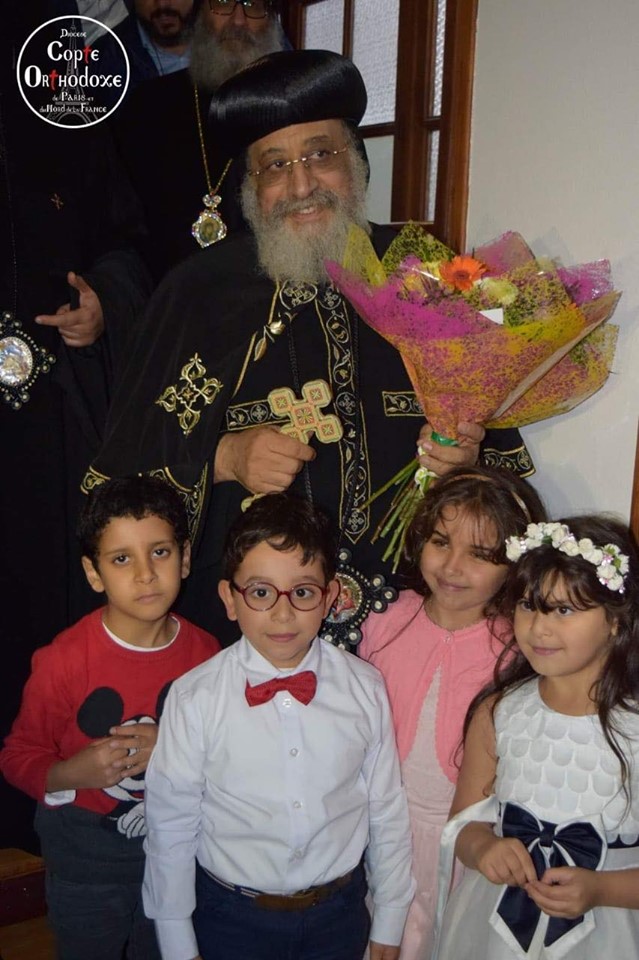 “Today, we should encourage our young people who migrate to France to merge into and integrate with the French community, but also to preserve at the same time their Coptic heritage and tradition.”

Pope Tawadros made special reference to President Macron’s recent visit to Egypt last January. “It had considerable impact on the Egyptian public and State,” he said. “His visit to us at St Mark’s in Cairo encouraged me to visit France.”

Pope Tawadros started his pastoral visit at the Cathedral of the Virgin Mary and Archangel Raphael church of the Diocese of Paris and North France. Accompanied with Anba Marc, he was treated to a guided tour of the cathedral and a detailed account of its history. He saw the recent renovations, frescos, and icons. He presided over Mass and consecrated the altars, icons, baptismal, and utensils. 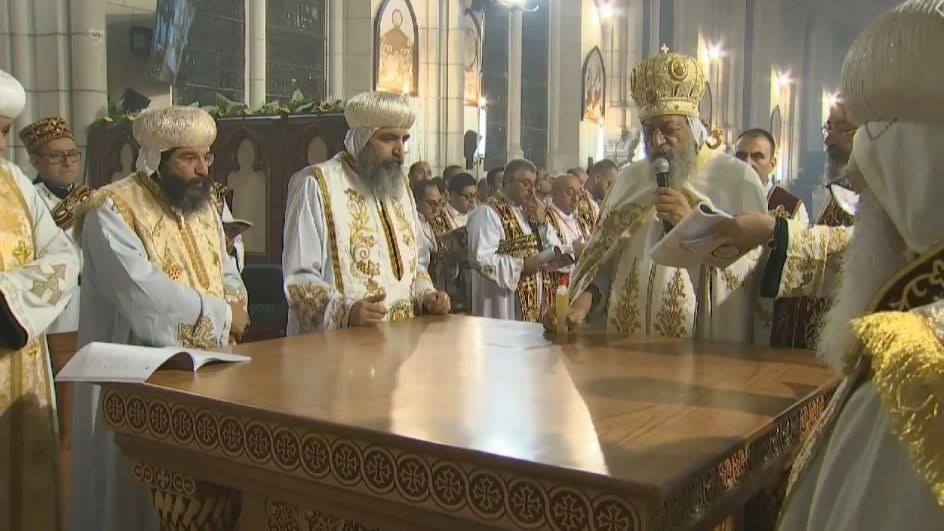 The cathedral was the Catholic church of Marie Médiatrice de Draveil until 2017 when it passed into the hands of the Copts, becoming the seat of the Bishop of Paris and Northern France, Anba Marc. Mgr Michel Aupetit, Archbishop of Paris, was represented by Monsieur le chanoine Jérôme Bascoul, episcopal vicar in charge of ecumenism.

The priests and monks of the Coptic Diocese of Paris and Northern France had a meeting with Pope Tawadros who spoke to them about “Consecration and service”. A number of bishops participated in the meeting, among them Anba Athanasius, Metropolitan of Marseille and Toulon of the French Coptic Orthodox Church; Anba Danial; Anba Luka, Bishop of Southern France and the French Part of Switzerland; and Anba Mikhail. 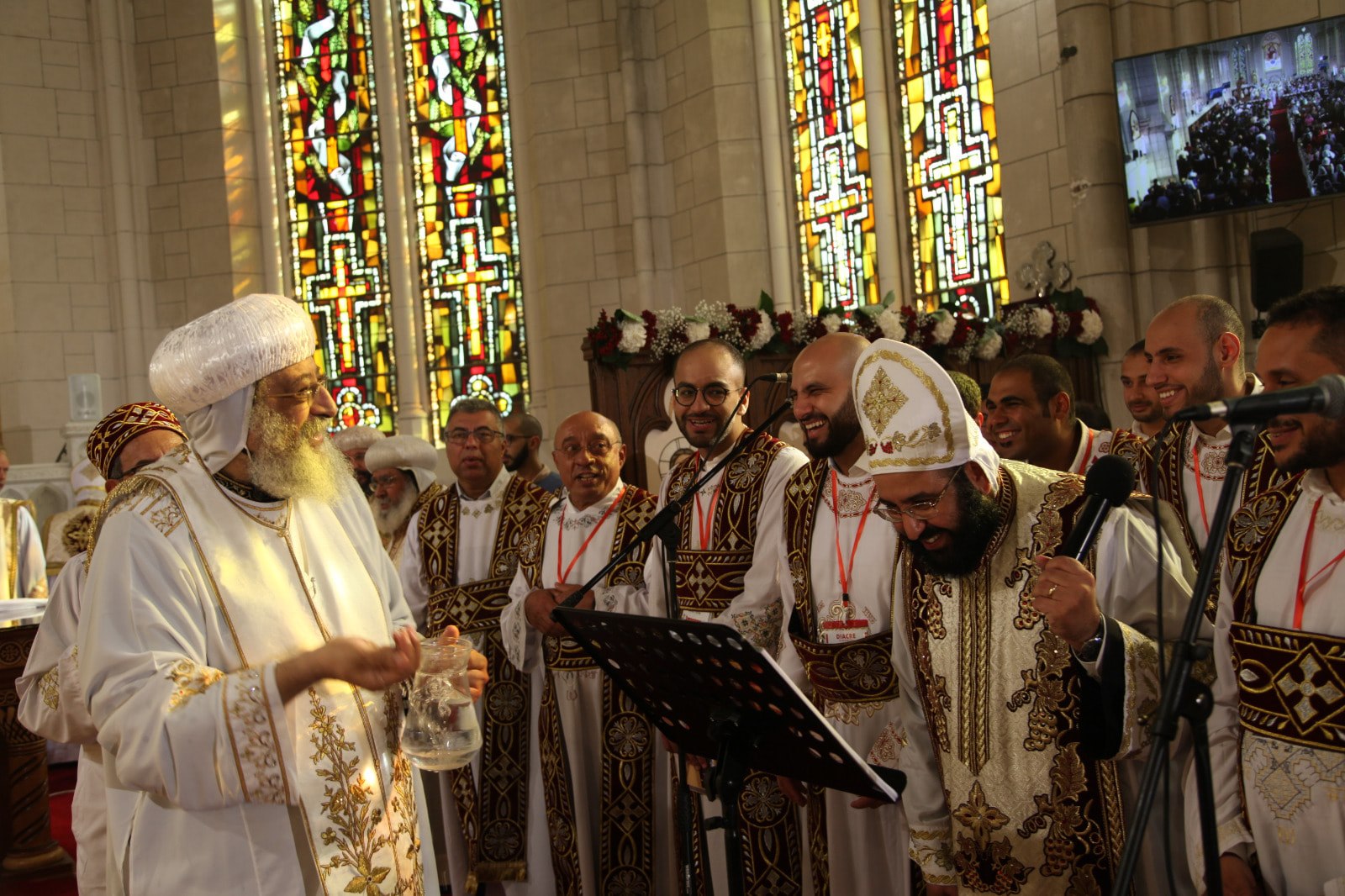 The Pope also visited the church of St Athanasius and St Kyrillos in Sarcelles where he presided over Vespers service jointly with Metropolitan Athanasius. Attending were Parliament Member François Pupponi and Sarcelle Mayor Patrick Haddad of Sarcelles.

Family: Icon of the Church

During his meeting with the Coptic congregation of the church of the Virgin Mary and Archangel Raphael, Pope Tawadros spoke of “Marriage and Family”.

The Pope said the Coptic family was the living icon of the Coptic Church. A strong family makes a strong Church, he said “Christianity teaches us that marriage is a triple bond of husband, wife, and the Lord,” he said. 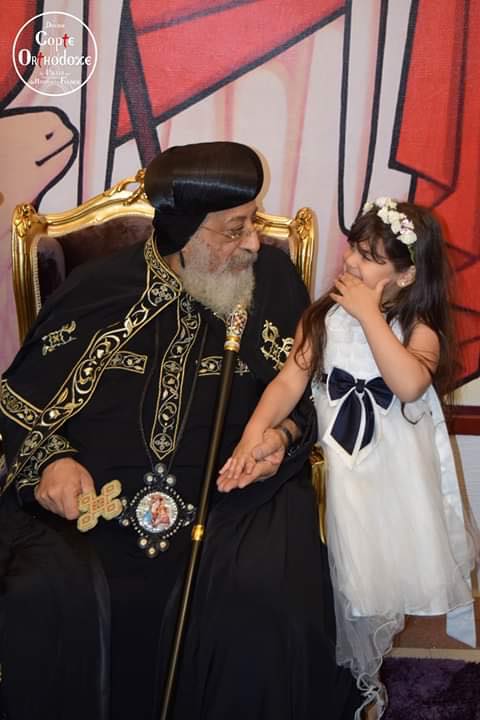 “Please, keep on praying and reading the Bible in your homes,” Pope Tawadros said. “This is the way you can raise your children in blessings, and grace.

“Love is the art of making the other happy,” he said. “A man works to make his wife happy; she does her best for his happiness, and they both make their children happy and content.”

The pope baptised a baby in a newly consecrated baptismal, shook hands with members of the congregation, and prayed with them. 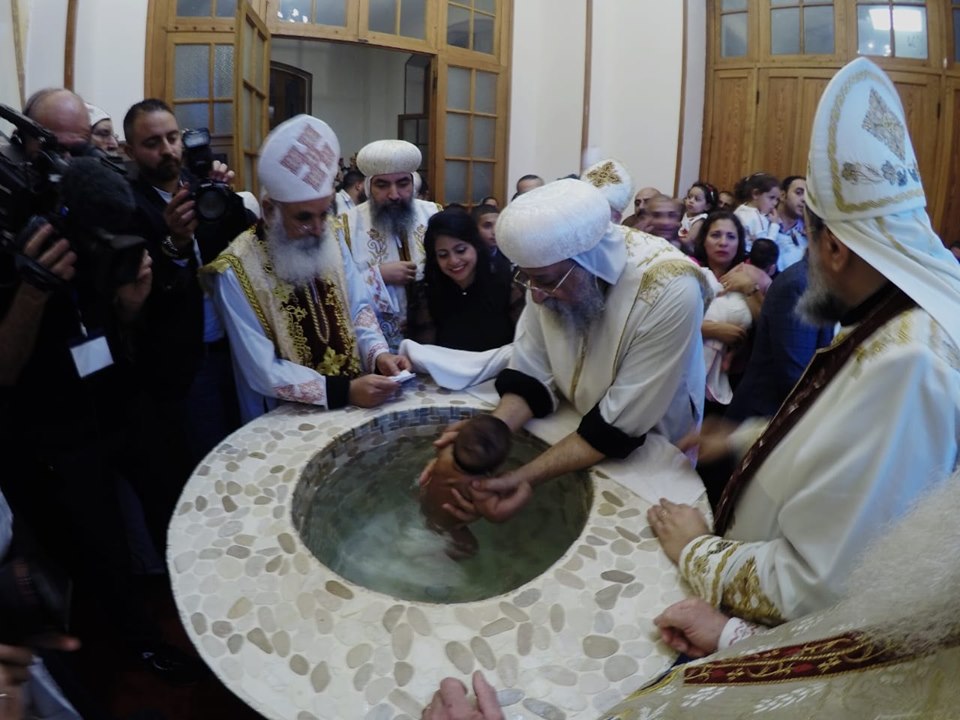 Perhaps the highlight of the Pope’s visit was his meeting with Coptic youth and children. In a lively event, he gathered with some 1000 Sunday School girls and boys at the Virgin Mary and Archangel Raphael’s. He told them stories with which they vividly interacted, took photos with them, and presented them with souvenir gifts. For their part, they gave a performance of hymns and praises, which the Pope described as “voices of heaven”. 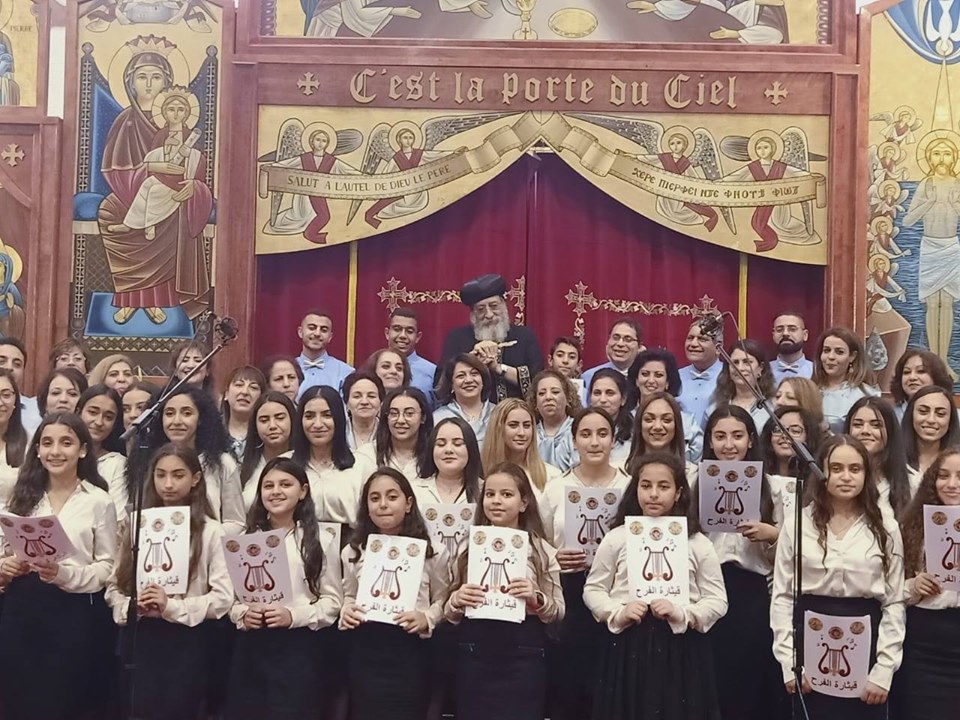 Another memorable gathering was with the children of the church of St Mary and St Mark in Châtenay-Malabry, after he had officiated Mass.

At the church of the Virgin Mary and Archangel Raphael in Paris, Pope Tawadros met Egyptian French young Coptic men and women. The meeting started with Vespers service, followed by hymns performed by the church choir, then on to dialogue with the youthful congregation. 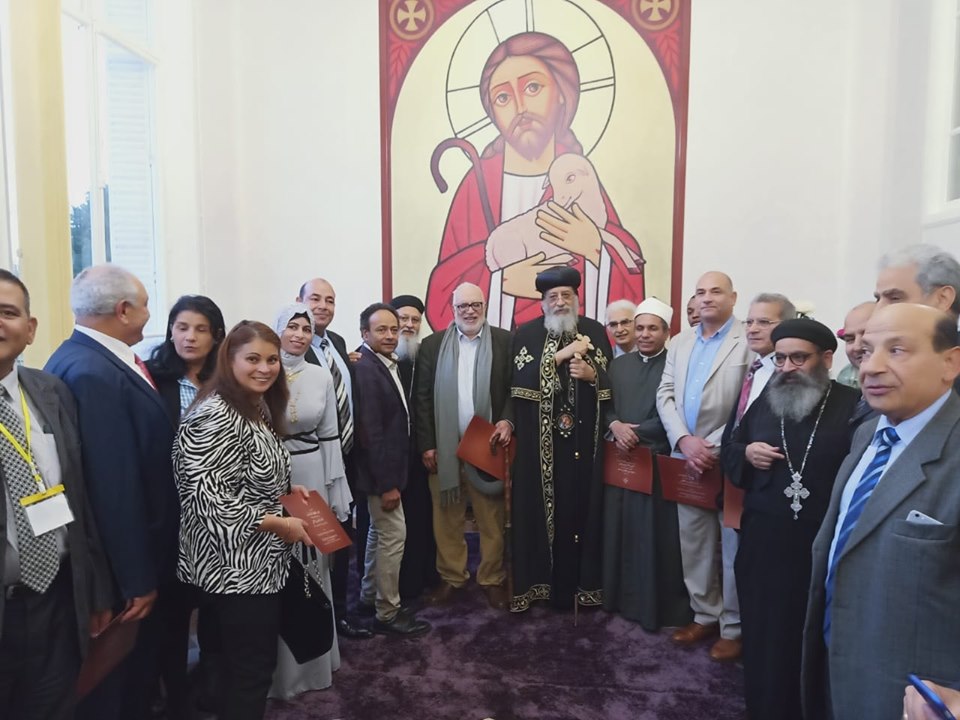 “Would Your Holiness approve of an Egyptian woman marrying a French man?” the Pope was asked. “Of course I would,” he replied. “It’s not about his being French, it’s all about his character and what secures a good marriage. Understanding of culture and language should be taken into consideration, as should social factors and personal compatibility. Such principles apply to all marriages.” 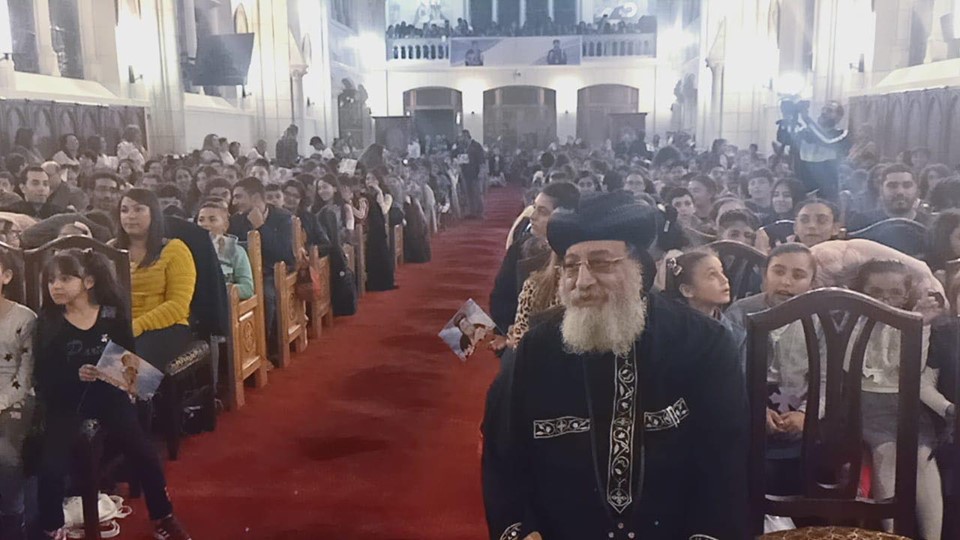 Another question to the Pope was: “Will you assure us that Egypt is well?”

“Egypt is doing well; matters are getting better,” the Pope said. “Do not hear one-sided news about Egypt. Our country’s economy is limited, but the State is doing its best, and the results are quite encouraging. Some people insist on seeing everything ‘black’, not looking at the positive achievements. But it is always good to look at the full picture. In general, Egypt is well, thank God.”

Before the meeting came to an end, Anba Marc presented the Pope, on behalf of the Coptic congregation, with a small statue of the Holy Virgin as a gift. 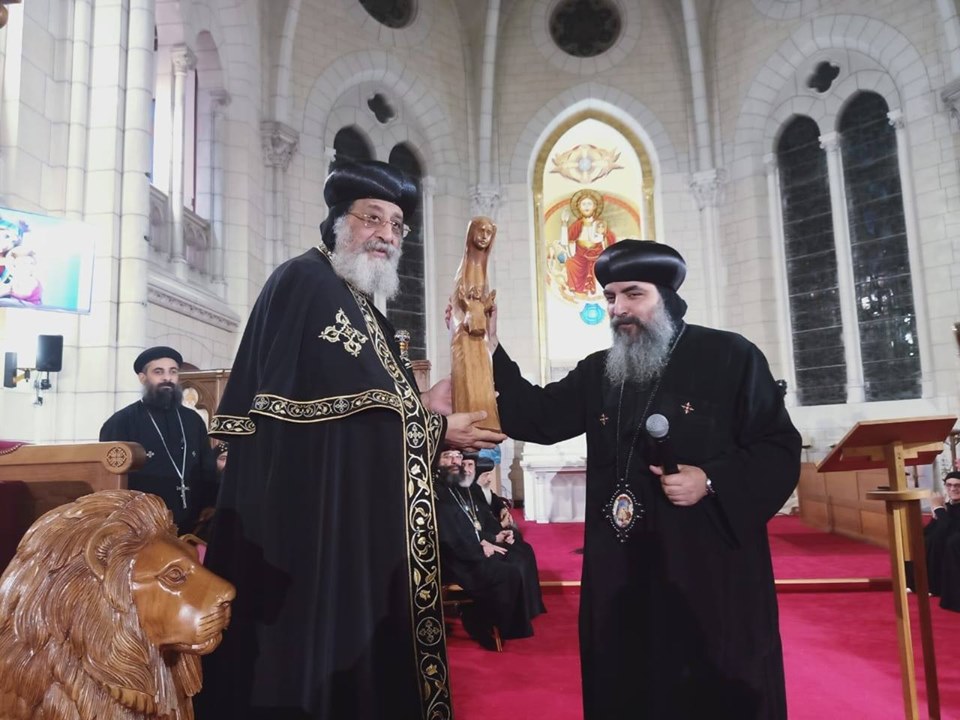 The last visit for Pope Tawadros in France was to the city of Orléans on the bank of the Loire River in north-central France, where he prayed at the church of the Prophet Elijah and Anba Sarapamon Abu-Tarha.

The congregation, many of whom are Sudanese Copts, were elated to have the Pope among them. “Once we learned of your forthcoming visit,” the church pastor Fr Demitrios told the Pope, “we started renovating our church to make it fit for receiving our patriarch. Everyone shared in the work; even the children lent a hand.

“In appreciation of Your Holiness expected visit, the city’s mayor donated two-thirds of the material needed for the church renovation,” Fr Dimitrius noted.

“Today we are all so happy you’re here. It is for us a feast day!”

On Tuesday 14 October, Pope Tawadros said good bye to Paris and boarded the train to Brussels to start on another visit on his European tour.