During her visit to Cairo last week, President of the UN General Assembly, María Fernanda Espinosa was received by Coptic Orthodox Pope Tawadros II at the papal headquarters in St Mark’s Cathedral grounds in Abbassiya, Cairo.

The visit was warm and cordial, and focused on promoting peace among people of different religions. Before she left, Ms Espinosa wrote a word in the Pope’s guestbook:

“Thank you for your extraordinary work to build peace, mutual understanding, and love among humankind. Harmony between religions and beliefs are central to build social cohesion, peaceful and sustainable societies.

Ms Espinosa told the media: “It has been an honour and a privilege to meet Pope Tawadros, the highest representative of the Coptic Orthodox Church of Egypt, and my visit was to discuss about the need to have a serious conversation to enhance efforts between peaceful societies and share the common concern about unfortunately the growing of violent extremism, intolerance and violence especially based on religion and belief. We agree that there is an effort that needs to be done to protect places of worship to increment and launch a strategy against hate speech, and also agree that spiritual leaders have a very strong role to play in building peace and tolerance and love among humankind.”

Ms Espinosa had met President Abdel Fattah Sisi, and tackled with him a number of regional and international issues, including terrorism, illegal migration and refugees.

The UNGA president lauded Egypt’s key role in the Middle East as a cornerstone for security and stability and its keenness to find political settlements to various regional crises, also its as defence of African issues in light of its chairmanship of the African Union.

President Sisi affirmed that Egypt seeks to realise tangible steps in terms of achieving the goals of African Union’s Agenda 2063 and its initiative of Silencing the Guns by 2020. 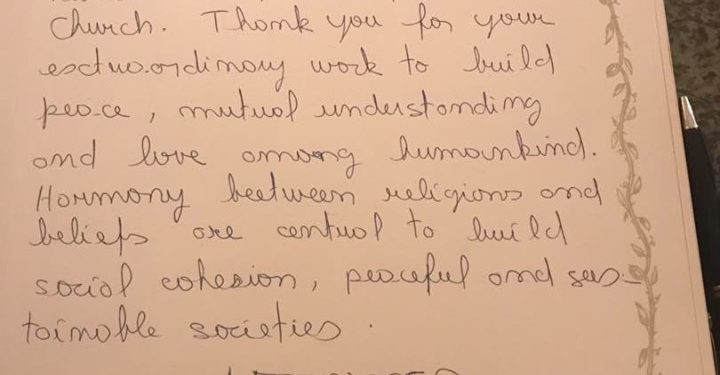