A bus carrying Coptic pilgrims who had visited the monastery of Anba Samueel al-Muetarrif (St Samuel the Confessor) in the Minya region of the Western Desert, some 200km Southwest Cairo, was shot at today, Friday 2 November, by unknown assailants in a four-wheel drive vehicle. Seven Copts lost their lives, and another seven were injured. The police and ambulance cars arrived at the scene; the injured were moved to hospital, and the police is attempting to catch the culprits.

A security source told the media that the road leading to the monastery has been closed since May 2017 when a similar attack took place. The road is difficult to secure, the security source said, owing to its location in a rugged desert spot where there are no communication facilities. Hence the police closure of the road. The bus carrying today’s pilgrims used a side road to reach the monastery.

On his Twitter account, President Abdel-Fattah al-Sisi mourned the dead, terming them martyrs, and wished the injured a speedy recovery. He promised retribution , writing that “we will go on fighting black terror; the culprits will be found and brought to justice. Such attacks shall not break the will of our nation to survive and rebuild.” 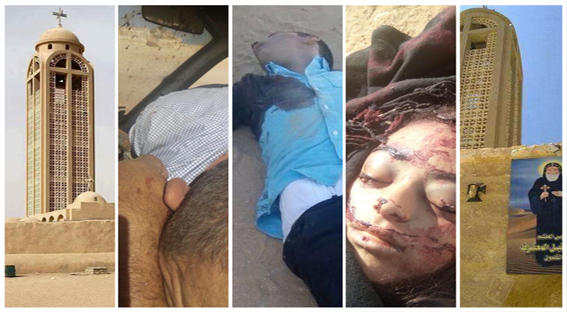