The street is known as “Sharei Keneest al-Roum”, literally the Street of the Roum [Greek] Orthodox Church”. Beyond doubt, a church exists there; otherwise why should the street be so named? Yet the church in that street in the coastal town of Rashid, also known as Rosetta, which lies at the northern tip of the west branch of the Nile Delta as it flows into the Mediterranean, has been partially destroyed in order to rob it of its identity as a church. It has been in the centre of a prolonged legal tug-of-war between the Coptic Orthodox Church and Rashid local government on one hand, and one Judge Mustafa Tarana on the other. Both the Church and Judge Tarana claim ownership of the building, the Church claiming it as a working church, and Judge Tarana claiming it never was a church in the first place. Hence his repeated attempts at destroying it and wiping out any features that confirm it as a church. 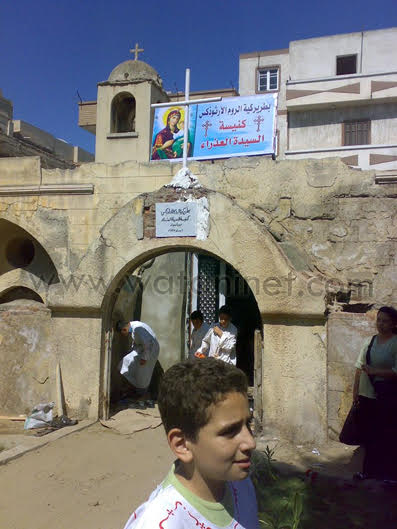 The church in question belonged to the Greek Orthodox Patriarchate of Alexandria and All Africa, which in turn belongs to the family of Eastern Orthodox Churches. The judge is Muhammad Mustafa Kamel al-Taranelli who goes by the name of Mustafa Tarana.

The Greek Orthodox, known in Egypt as the Roum Orthodox, formed a sizable congregation in Egypt during the bigger part of the 20th century. During recent decades, however, their congregation has dwindled in number owing to immigration, and now stands at less than 300,000 in all Egypt.

Rosetta is one of those places where, for more than two decades now, almost no Roum Orthodox remain. In 1990, the then Greek Orthodox Patriarch of Alexandria and All Africa, Parthenios III, decided to sell the church in Rosetta, in light of there being almost no worshippers left. The magnificent church had been built in the 6th century, and was several times renovated, the last time being in 1817. Along its outer fencing wall, 14 rooms had been built which were rented as shops to different tenants. The church and shops were all sold to Muhammad Mustafa Kamel al-Taranelli at the price of EGP100,000. By 1993, the sum had been paid in full.

As soon as he paid the first installment in 1990, Judge Tarana attempted to demolish the shops and church but the shop owners, all of them Muslims, protested. The outcome was that the land was handed over to the Waqf (Religious Endowments) Authority which refused to recognise the sale basing on the fact that the land was in the first place a waqf, land locked in a trust fund and endowed to the Church, meaning it could not be sold.

Several court cases were filed by the disputing parties. Judge Tarana, a judge on the Cairo Criminal Court, took advantage of the fact that the church and its grounds had fallen out of service and were turned into a derelict area that became an unofficial garbage dump. When the court-appointed committee that was to report on the disputed land and buildings submitted its report to court, the report merely mentioned that the dispute involved a land upon which stood a desolate building—it mentioned no church—and 14 shops. The court ruled in favour of Judge Tarana. The plaintiffs appealed the case. 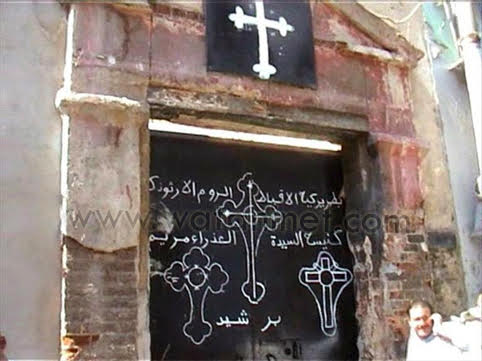 In the meantime, Pope Parthenios III died and was succeeded by Pope Petros VII (1996-2004), then the current Pope Theodoros II. In June 2007 Pope Theodoros II wrote an official letter to Rosetta primary court informing of the details of the sale, and explaining that at the time of the sale the patriarchate had been ignorant of the fact that Egyptian law banned the sale of places of worship. Accordingly, and in line with objections to the sale from the Antiquities Authority—the church is a 6th century building—the patriarchate was reneging on the sale and offering Mr Taranelli the sum of money he paid in addition to any suitable compensation, be it an equivalent sum, say.

The Greek Orthodox Patriarchate, moreover, handed the church over to the Coptic Orthodox Church to use as a church. Anba Pachomius, Bishop of Beheira, delegated Father Luqa Awad to conduct services in the new church which was named after the Holy Virgin and Saint Nicolaus.

In September 2008 Judge Tarana, apparently sensing he would ultimately lose his battle in court, decided to strike. On Friday 19 September at dawn, a band of some 40 armed thugs, with a bulldozer on hand, stormed the church. They ruined the fencing wall together with a shop and warehouse owned by Ahmed Hassan al-Raghi, the eastern part of the church sanctuary, icons, the altar utensils, as well as the relics of saints kept there. They tied up the guard, 45-year-old Ashraf Fahmy, and his four children and looted their shack down to the gas cylinder they used for the cooker. 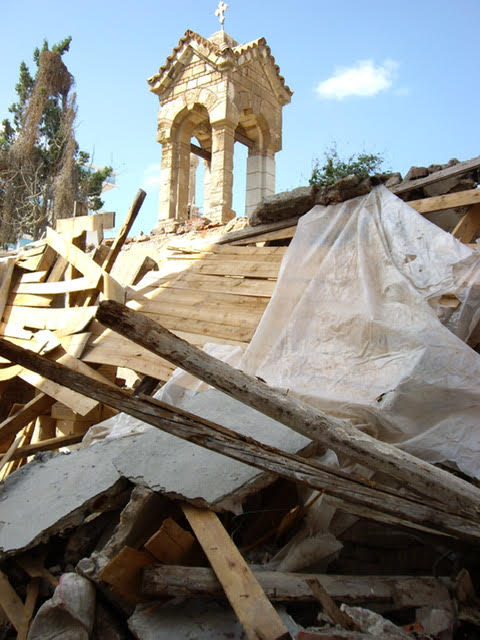 According to the locals, Judge Tarana was attempting to ruin the features of the church building so as to weaken the case against him. “But everyone knows a church stands there,” said Haj Ahmed Muhareb, a fishmonger in the neighbourhood. “Even the street still carries the name the Roum Church Street.”

Judge Tarana and his two sons, Muhammad and Mahmoud, both public prosecutors, were charged with planning the assault in order to alter the character of the building as a place of worship, with the aim of claiming its ownership. The Judge was also charged with ruining the building and attempted murder of the guard.

Anba Pachomius insisted that Beheira Bishopric was in possession of the official letters from the Greek Orthodox Patriarchate handing over the Rosetta Church. “We consecrated the church and opened it for service in 2007,” he told Watani. “It is unacceptable that a judge, of all people, should resort to such tactics.”

The court cases dragged on, amounting to some 40 such cases before various courts in Rosetta, Damanhour, Alexandria, and Cairo. Judge Tarana’s attempts at demolishing the church also did not stop; he had started these attempts since 1990, but the most vicious were the one waged in 2008 and another in 2012.

In 2010, Judge Tarana won a court case which fined the Coptic Church EGP500,000. This ruling was partly executed by forcefully auctioning the personal property—in this case the home furniture and appliances—of Fr Luqa and Dr Alphonse Mikhail Saad, the Coptic layman in charge of the Rosetta church. 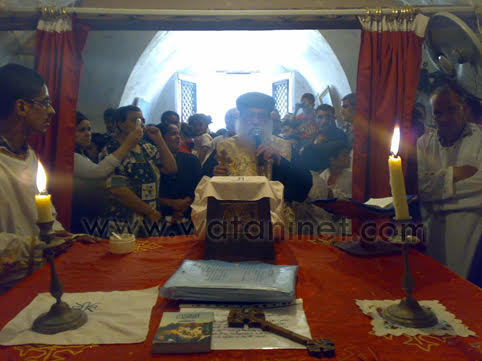 Up to that time, it was the Rosetta town authorities which had been disputing Judge Tarana in court. The Coptic Church, however, represented by Pope Tawadros II, Anba Pachomius, and Fr Luqa then joined the plaintiffs versus Judge Tarana. They demanded that the demolition of the church of the Holy Virgin in Rosetta should be stopped, that the church should be rebuilt and renovated, and that the registered sale contract between the Roum Orthodox Patriarchate and Judge Tarana should be declared null and void.

On 28 March 2016, Judge Muhammad Abdel-Wahab Khafagi, deputy to the head of the State Council—the highest administrative court in Egypt—who presided over the Alexandria Administrative Court, Beheira circuit, ruled in favour of the Coptic Church and the Rosetta town authorities. It moreover called upon the House of Representatives to speed up the passing of a law for the building and renovation of churches, as stipulated by the Constitution. The law was indeed passed in September 2016.

In the landmark ruling, Judge Khafagi said that churches may not be demolished or used for any purpose other than worship.

The ruling was based on a Constitutional Court decision that went back 12 years earlier and which stipulates that churches and mosques are both places of worship that must be treated on equal footing. Constitutional Court rulings supersede all others, the Alexandria court stressed.

The 2016 court ruling was also based on an opinion by al-Azhar, the Cairo-based Islamic institution which dates as far back as the 10th century and is today the topmost authority on Sunni Islam in the world. The Alexandria court’s Beheira circuit had referred to al-Azhar, for its opinion on the matter. The reply given was that non-Muslims in Muslim countries were entitled to protection of their places of worship; churches may thus not be demolished or converted to any use other than what they were originally built for.

Monday 2 September saw the Supreme Administrative Court adjourn the case brought by Judge Tarana against the Coptic Church and Rosetta authorities to 11 November 2019.

The State Commissioners’ report demanded to ascertain the constructional soundness of the [church] building in order to assess whether it can still be used for the purpose it was built for. It also demanded information on all activities taking place in the building, whether or not it was licensed for use to practice religious rites, and if any and which part of it is currently used for worship.

The report also required to verify whether the building is listed as heritage with the Ministry of Antiquities, and to determine all the details related to the building including its successive owners. Accordingly, the State Commissioners Authority decided to form a committee tasked with finding the required answers by talking to experts and witnesses, and seeking and examining relevant documents. The committee will be formed of Alexandria University professors of Architecture and Antiquities.

Father Luqa, priest of the Rosetta church of the Holy Virgin and St Nicolaus expressed disillusionment and shock at the outcome of the recent court session. He said the State Commissioners had overlooked the landmark ruling of the Alexandria Administrative Court which recommended the reconstruction of what had been demolished by Judge Tarana in 2008 and 2012. The ruling, Father Luqa said, had confirmed that churches may neither be bought nor sold.