A high-ranking delegation from the Russian Orthodox Church visited Pope Tawadros II on 7 November at the St Mark’s Cathedral papal headquarters in Abbasiya, Cairo to present him with the Order of Glory and Honour, on behalf of Patriarch Kirill, Patriarch of Moscow and All Russia.

The recognition marks 10 years on the seating of Pope Tawadros II as Patriarch of the See of St Mark, and his 70th birthday. It is also in appreciation of his efforts to nurture relations between the Coptic and Russian Churches. 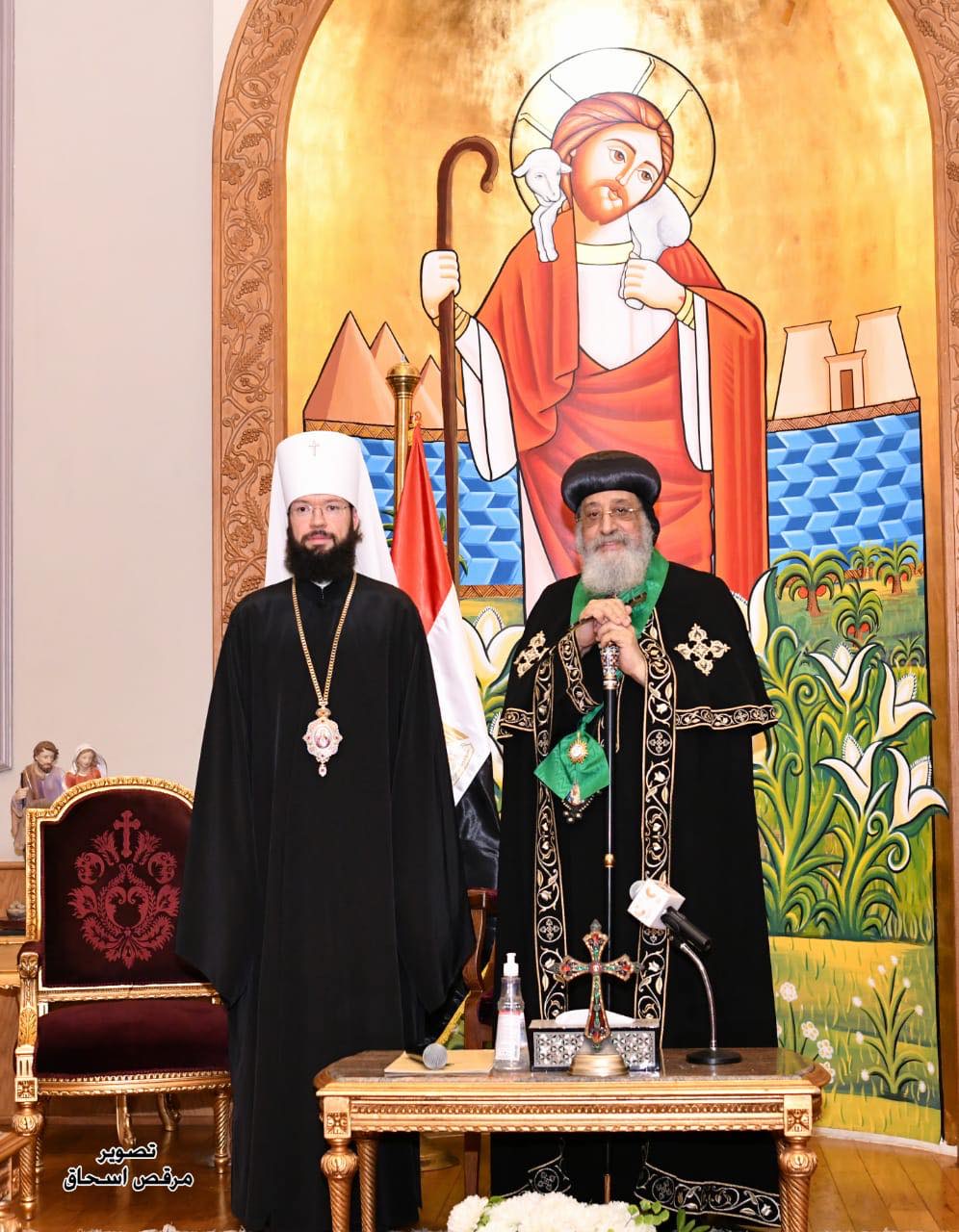 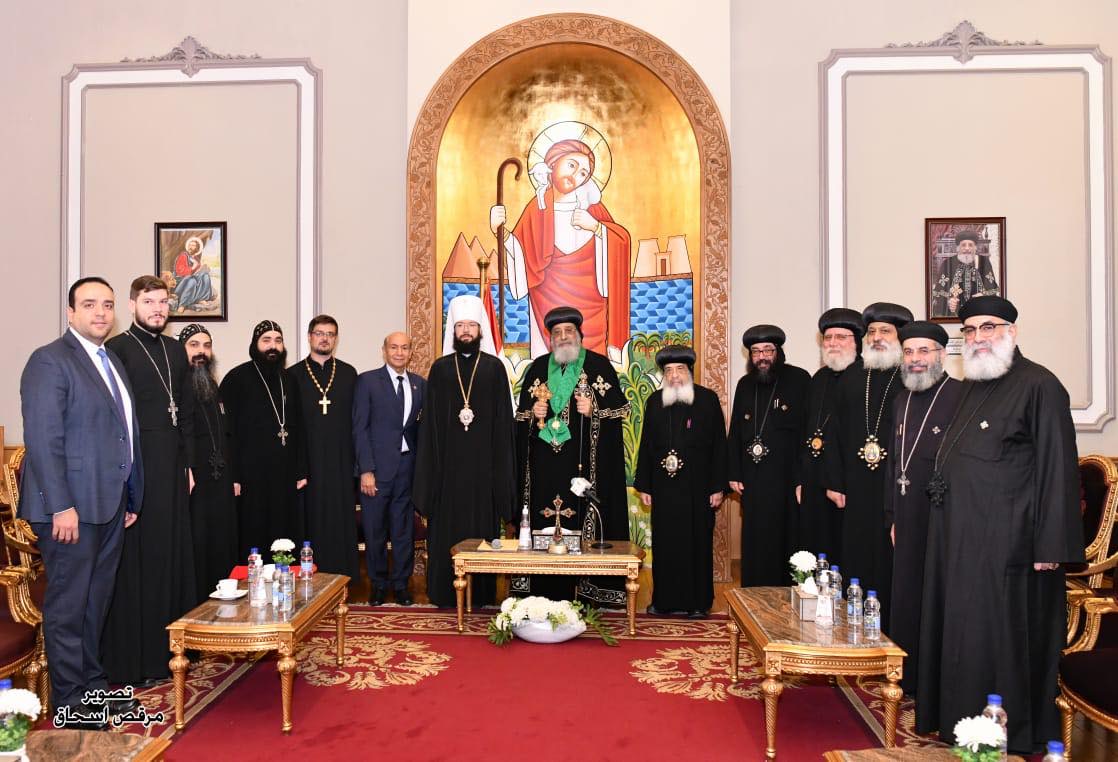 For his part, Pope Tawadros welcomed the Russian delegation, and expressed his pride of the amicable relations between both Churches, adding that there is a deep friendship between the Egyptian and Russian peoples. The Pope said he was very happy for the message he recently received from Patriarch Kirill extending his and the Russian Church’s best wishes. Pope Tawadros also praised the work and activities carried out between the two sister Churches through the cooperation of the joint committee that includes representatives of both Churches. He also thanked the Russian Church for helping the Coptic Church in Russia to serve its Coptic congregation and provide them with places for worship. 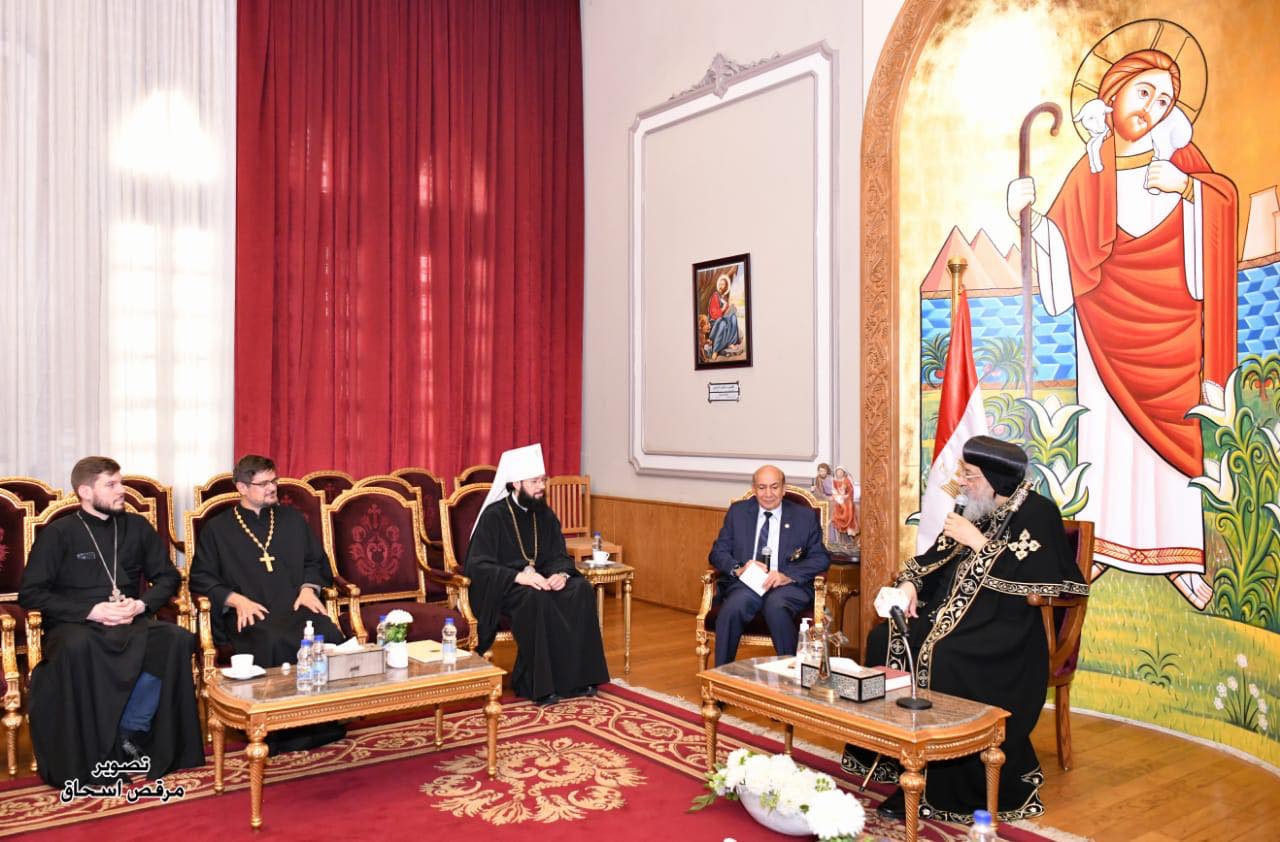 Pope Tawadros expressed his gratitude for the Order of Glory and Honour bestowed upon him by the Russian Church.

The Order of Glory and Honour is the highest decoration in the Russian Church. It was incepted in 2004 through a decision by the Russian Holy Synod which was then headed by the late Patriarch Alexy II, Patriarch of Moscow and All Russia in 1990 – 2008. The order borrows its name from St Paul the Apostle’s words: “Glory, honour and peace for everyone who does good,” (Roman 2:10) 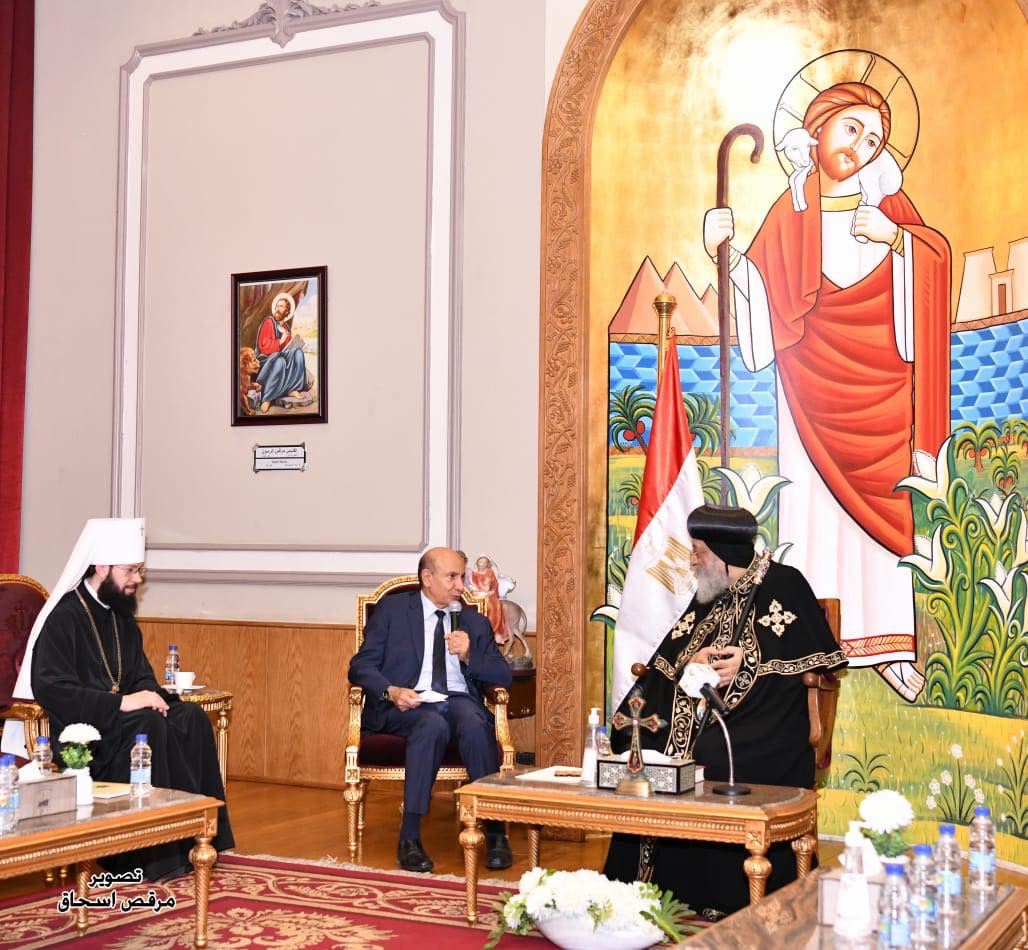 Warm relations between the Coptic and Russian Orthodox Churches go back a long way.

The mutual visits of the prelates of the Coptic and Russian Churches during the papacy of Pope Shenouda generated valuable theological dialogue between the two Churches. 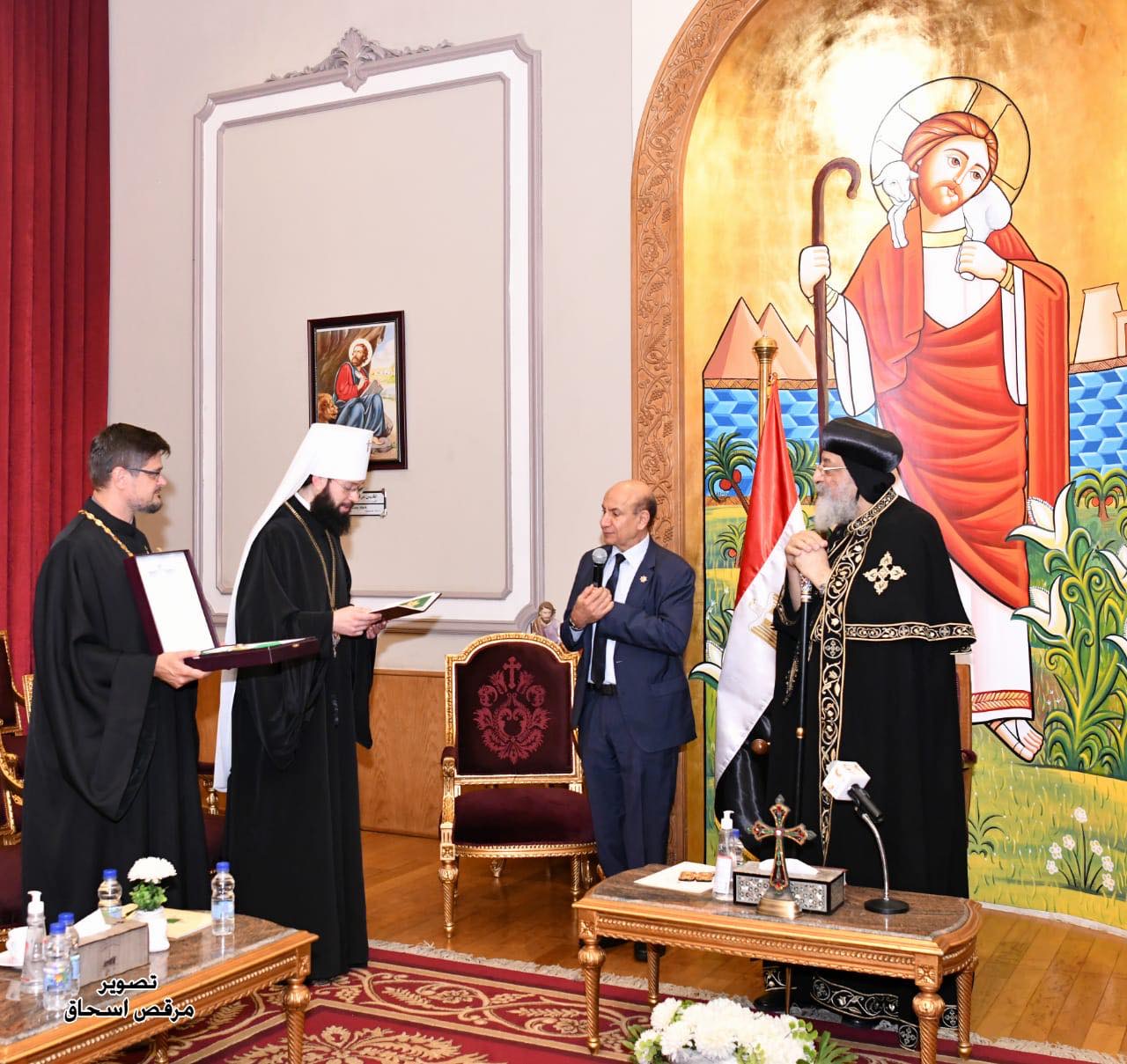 Pope Tawadros II became Patriarch of the See of St Mark in November 2012, and has since displayed a keen ecumenical sense that led him to work on enhancing relations between the Coptic Church and other major Churches in the world. He paid two visits to the Russian Orthodox Patriarch in Moscow: the first in November 2014, during which the two popes decided to form a joint bilateral committee concerned with proposing a plan for regular dialogue and collaboration between the two Churches on the spiritual life, pastoral care, education and social ministry. The second visit was in May 2017, during which Pope Tawadros II was awarded the prize of the International Public Foundation of the Unity of Orthodox Nations “for his distinguished activity in promoting unity between Orthodox communities, and for fostering Christian values in the community.” He was also received by President Vladimir Putin. 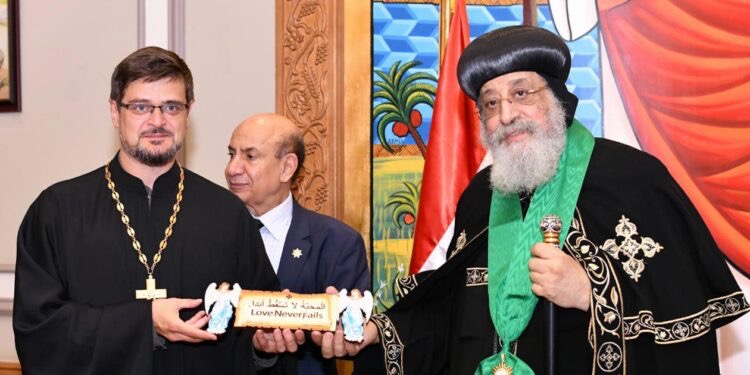 An unprecedented leap has since taken place in the relations between the Coptic and Russian Churches, with close cooperation on the academic; media; social and development fronts; as well as on theological dialogue and the exchange of visits on various levels. In May 2019, members of the Moscow Theological Academy (MTA) paid a visit to Egypt that included touring various map asteroids and convents, and during which the Bilateral Dialogue Commission of the Coptic and Russian Orthodox Churches convened in Cairo.

In 2021, a delegation of Coptic clergy and monks visited Russia upon invitation of Patriarch Kirill of Moscow and All Russia. It was the fifth since 2017 in a string of visits by Copts to the Russian Orthodox Church.

The most recent visit by Russian monks and nuns to Egypt took place last month; with tours to the monasteries of Anba Antonios by the Red Sea, St Shenouda the Archimandrite in southern Egypt, and other monasteries and convents.

Meeting of the popes