This month marks the martyrdom of Bishop Pierre Claverie, O.P. (1938 – 1996). The Dominican Order of Preachers in Cairo held a commemoration for him. 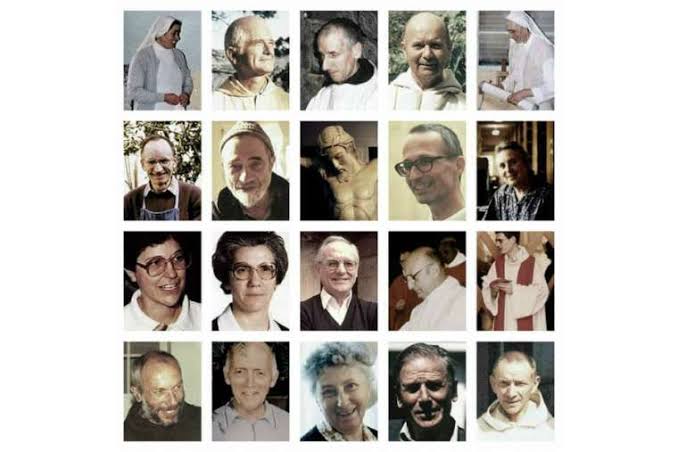 On 1 August 1996, Monsegnieur Pierre-Lucien Claverie, O.P. (1938 – 1996) was martyred during the Algerian Civil War. Eighteen Algerian monks had preceded him, martyred between 1994 and 1996 at the hands of the Islamic Salvation Front which also claimed the lives of more than 150,000 Algerians. 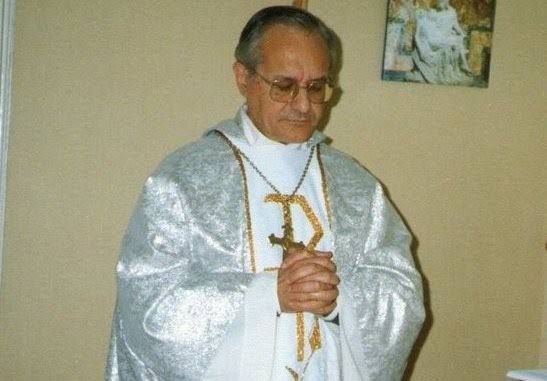 Pierre Claverie was a Roman Catholic prelate who served as Bishop of Oran from 1981 until his martyrdom in 1996.
In March 2007, calls were launched to canonise Bishop Claverie and the monks who were killed during the Algerian Civil War.
In January 2018, Pope Francis decided to beatify “Bishop Pierre Claverie and his 18 companions”, and in December of the same year confirmed the group’s beatification which was celebrated in Oran on 8 December 2018.

Similar to Egypt
In Cairo, the Dominican Order, known as the Order of Preachers O.P, of which Bishop Claverie was a member, held a recent commemoration for him. The event was widely attended by nuns from various orders of the Catholic Church, also by friars of the Dominican Order who flew from Canada and Iraq especially for the event. To mark the occasion, the Dominican El Aquini Publishing House in Cairo issued a booklet titled Bishop Pierre Claverie and his 18 companions, Aquini; May 2019. The booklet is a translation of the French Mgr Claverie et ses 18 compagnons martyres d’Algérie, translated into Arabic by Christine Youssef and Moemen Salam. It presents a biography of Bishop Claverie, and offers a glimpse into his thought. It also includes biographies of the 18 Algerian martyrs, and how the Bishop responded to the martyrdom of each, and to that of the 150,000 who had lost their lives in the Algerian Civil War. 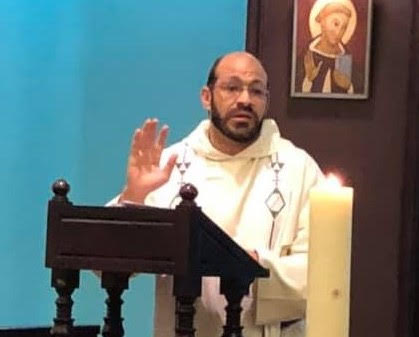 Father John Gabriel Khalil, O.P., Director of El Aquini House talked about Bishop Claverie, his life in Algeria and his murder on 1 August 1996 along with his driver and friend Mohamed Bouchikhi (1975-1996), when a bomb exploded at the entrance to the bishopric as the two were entering the building just before midnight.
“Today we celebrate those martyrs who were able to free their hearts of earthly interests, and open them to the love of our Lord Jesus Christ,” Fr Gabriel said. “The martyrs will live in the heart of the Church, testifying to love and inner freedom for the Glory of God and salvation of the world.”
Fr Gabriel said that was the first time the Dominican Order in Egypt commemorates the 19 martyrs who were killed in Algeria at the hands of Islamist terrorists. “We in Egypt care about the story of these martyrs for many reasons, most important of which is that Pierre Claverie lived in Algeria at a time when conditions were very similar to those in Egypt,” he said.

Bishop of Muslim
Pierre Claverie was born into a French family that had lived in Algiers for four generations, so he felt himself fully Algerian. Yet he said that the greatest discovery in his life came when in his twenties he realised he had been living all his life in a “colonial bubble”. He said that his Christian upbringing had never challenged him to step out of that bubble, to see the Arabs too as his “neighbours”, thus the majority of Arabs had been basically invisible to him. From then on and until he breathed his last, he spent his life trying to encounter the other whom he had ignored all his youth, and striving to overcome what he called “the abyss that separates us”. His life was governed by a real “passion for the other”. Fr Gabriel noted that many of us live in bubbles. “As an Egyptian Christian,” Fr Gabriel said, “I have lived in a bubble. As Egyptian Christians, we tend to lock ourselves and our friends in a bubble where we speak our own language.” This could be due to the rise of political Islam that started in the 1970s, he said. “The life that Bishop Claverie led in Algeria offers us a testimony of love according to the Bible,” Fr Gabriel said. 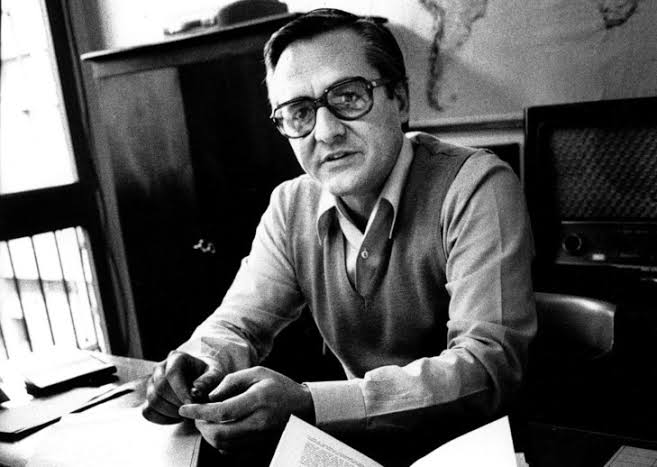 Bishop Claverie was a man of dialogue; one of his quotes being: “One of my principal missions in Algeria is to establish, develop, and enrich relationships, always, everywhere, and with everyone. We must take Christ as an example; He opened dialogue with all of humanity. Anything that hinders dialogue is in in fact against Christian love. I blame religions, and sometimes my Church, for nurturing an individual, one sided, single tracked dialogue that sows division. In order to meet the other, we must step out of our arrogance so that God implants in us a new human life and a better future.” Bishop Claverie was so much a man of dialogue, that at his funeral in 1996, Algerian Muslim mourners described him as the “bishop of Muslims too”.

Islamic and Western arrogance
According to Bishop Claverie, “the scourge of our society is that we often have prejudices against others. We would do better to focus on our shortcomings. If I discover the weaknesses inside me, I will start getting closer to the other. 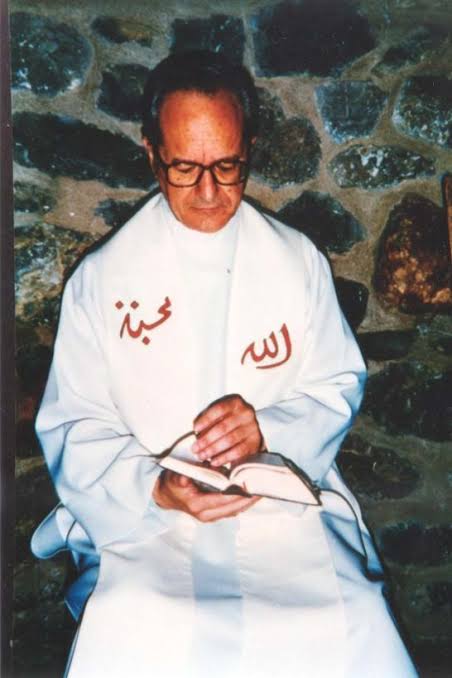 “Both the Islamic and Western worlds are arrogant; each believes it holds the truth, and that it is called to rule the world,” Bishop Claverie said. “Once we observe that we are not better than others, and once we learn to coexist, we can go back to reality and change it together to make it more humane.”
Bishop Claverie was uncompromising in his Christian identity, but also relentless in his commitment to friendship. He was interested in “real, living Islam”, meaning people rather than theories. He resented superficial dialogue of convenience, and believed that true dialogue recognised the uniqueness of the other and desired to enrich differences. He was open to learn from the Muslims of Algeria, even about the search for God. However, he was fully aware of and acknowledged the reality of the Islamic threat, and he often denounced “the cowardice of those who kill in the shadow.” He paid his life trying to communicate two convictions: first that a democratic, tolerant Islamic society is possible; second, that it is better to build alternatives than to tear down what he opposed. Yet he always realised what this choice implied and how it jeopardised his life. He joined hands with numerous Muslims to differentiate Islam from political Islam, warning against “generalisation”. He said that the biggest mistake was to put everyone in one basket, and to consider all Muslims terrorists just because a group of them was.
“Reconciliation is not a simple affair,” he wrote in 1995. “It comes at a high price. It can involve, as it did for Jesus, being torn apart between irreconcilable opposites. An Islamist and a kafir (infidel) cannot be reconciled. So, then, what’s the choice? Well, Jesus does not choose. He says, in effect, ‘I love you all,’ and he dies.” Bishop Claverie; like Jesus, ended up murdered. He died alongside his Muslim driver and friend, their blood mingling, offering a metaphor for their common humanity that ran deeper than differences of ethnicity, ideology and creed. 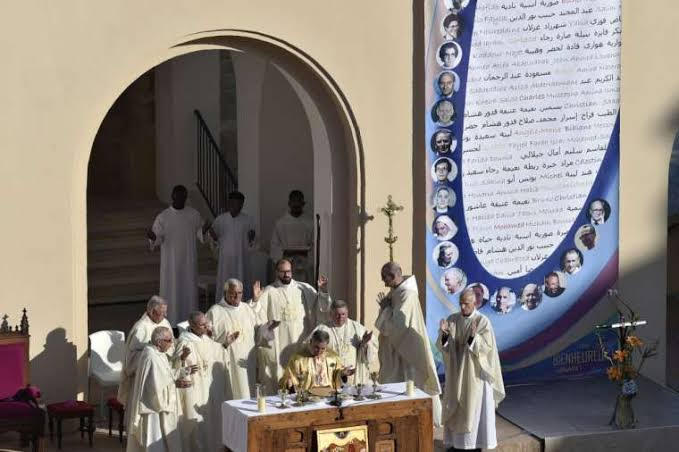 Holding hands
Fr Gabriel said that the 18 martyrs were monks who led a hard life in Algeria under the rise of political Islam, extremism and terrorism. Although they feared for their lives, they chose to remain in their village to honour the friendship they had forged with their Muslim neighbours. Bishop Claverie wrote that they remained “beside the sick friend, holding his hand, placing a wet cloth on his forehead”.
Fr Gabriel remarked, “we neither fear martyrdom nor strive for it as an end.”
According to Bishop Claverie, those who carry out crimes against humanity do not know what they are doing, “that’s why we ask the Lord to forgive them like Jesus did. But most importantly, they tamper with the minds of youth to use them as tools for destruction.
“Today we celebrate the bond between the Church on earth and the Church in Heaven,” Fr Gabriel concluded.

A life poured out
In the book A Life Poured Out, Orbis, 2007, the author Fr Jean-Jacques Pérennès who was a personal friend of Bishop Claverie wrote his biography. He cites the following story: “A Muslim who was visiting Claverie, said he had to leave in order to make it home in time to say his prayers. Claverie insisted that he stay, telling him that he could say his prayers in the bishop’s house. He even told him, ‘It is an honour for me today that you are praying in my home.’ He was not praying with him, but he was acknowledging the possibility of somebody else having a real prayer before God.” 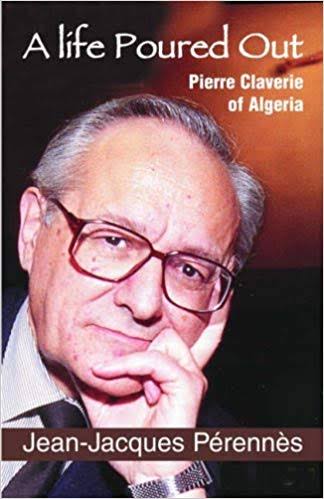 Obviously Bishop Claverie upheld his Christian identity, yet respected his fellow Muslims. He acknowledged the differences that existed between him and his Muslim entourage, yet never condoned extremist thought. He endorsed dialogue and respected differences, a cause for which he willingly paid his life.
Bishop Claverie’s life and thought have been an inspiration for many. He left more than 10 books in which he detailed his views on various topics, especially dialogue. During the last 23 years, more than six books were written about him and the Algerian martyrs.

Pierre and Mohamed
In 2011, the French Adrien Candiard, O.P. was so taken by the story of Bishop Cavalerie and his deep friendship with his Muslim friend and driver Bouchikhi, that he wrote a play to pay tribute to Pierre Claverie’s message of friendship, respect and interreligious dialogue. It was written on the occasion of the 15th anniversary of the assassination and was, according to La Croix website, a “modest stage reading, intended to be shown in churches”. However the play, directed by Francesco Agnello, and depicting an imaginary dialogue between Bishop Cavalerie and Bouchikhi turned into a huge success. First shown in 2011 at the festival of Avignon, it then toured many places around the world, among them Oran, Palermo, Paris, Cairo, Marrakech, Casablanca and Rabat. According to La Croix, it was performed more than 1000 times. The story of Pierre et Mohamed, the author says, strikes a chord with young people who are taken by the issue of the relationship between Christians and Muslims.
In 2018, the play was turned into a French book, also titled Pierre et Mohamed; Le Cerf et Tallandier; 2018. 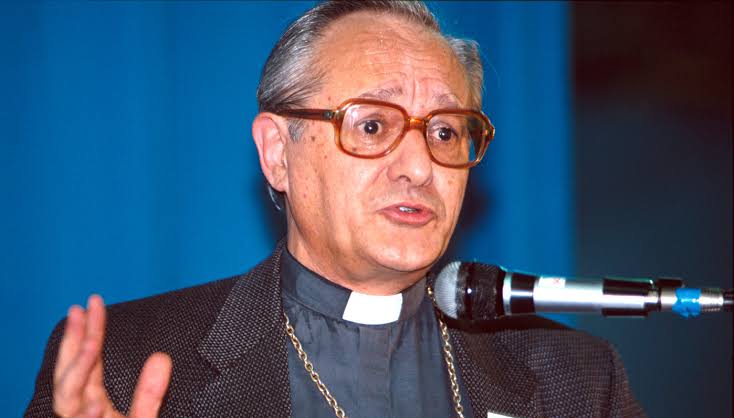 “The keyword of my faith today is dialogue; not by tactics nor by opportunism, but because dialogue is constitutive of the relationship of God to men and men to one other”, Pierre Claverie wrote.