Three policemen and three civilians were killed during a faceoff between the police and Islamic militants who attacked the National Bank of Egypt this morning in the heart of the town of al-Arish in North Sinai. A security source said that the terrorists planted five bombs around the bank, but the police responsible for securing the bank were able to confront them. More than 15 armed terrorists riding a green pick-up and shouting “Allahu Akbar” (Allah is the Greatest) targeted other security squads around the city. Local residents and students were terrified at the repeated sounds of explosions and exchange of fire as the police confronted the terrorists. The attacks left 17 injured.

Terrorists also attacked the security squad stationed at Mar-Girgis (St George) church in Arish, but were not able to attack the church itself, since the security forces confronted them the help of the armoured vehicle permanently positioned in front of the church for security. The terrorist’s car blew up, but the heavily-guarded church, which is under heavy security, incurred no damage.
Mar-Girgis’s was among the some 100 churches and Christian establishments nationwide assaulted, looted, and torched by the Muslim Brothers (MB) and their supporters on 14 August 2013, in the wake of the overthrow of the Islamist MB regime that came to power in 2012 following the 2011 Arab Spring.
[Avalanche of hate https://en.wataninet.com/egypt-arab-spring/egypt-post-30-june/avalanche-of-hate/1292/
The hidden report https://en.wataninet.com/egypt-arab-spring/egypt-post-30-june/the-hidden-report/14119/]
Back then, the Egyptian Armed Forces promised to repair and restore the ruined churches and buildings, and have kept good on their word. Work at Mar-Girgis’s in Arish, however, is taking more time than anticipated owing to the precarious security situation there.

Yesterday, 15 October, six army soldiers and 24 terrorists were killed as the Egyptian Armed Forces confronted attacks on army checkpoints at al-Qawadis, North Sinai. The Coptic Orthodox Church issued a statement denouncing this gruesome terrorist attack, and mourning the “courageous honourable martyrs of the nation, who paid with their lives to defend the nation against the vicious blows of terrorism.” The statement praised their resilience and heroism, together with their comrades in standing against gruesome terrorist attacks. The Church concluded its statement by highlighting that Egypt will forever remain a fortress that will abort enemies’ plots against it. 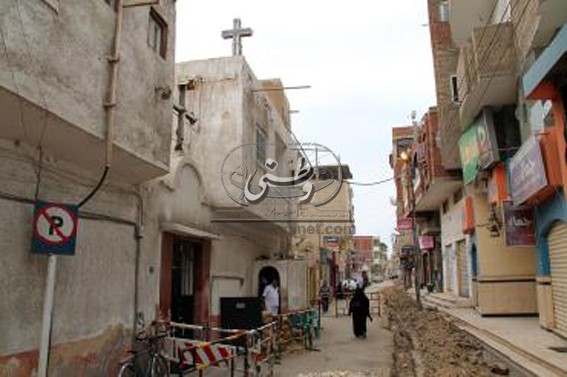