Two villages, some 450km apart, in Upper Egypt have seen demonstrations by hardline Muslims against the presence of two de-facto churches in the villages. The two churches, both unlicensed, have officially applied for legalisation of their status, meeting all the legal requirements for legalisation according to the 2016 Law for the Building and Restoration of Churches. The law stipulates that it is illegal to close down any unlicensed church that has officially applied for legalision.

The village of Sultan Basha in Minya, some 250km south of Cairo, was the scene of demonstrations on Friday 24 August by scores of Muslim villagers who headed to the village church, a small de-facto, unlicensed one, shouting: “We don’t want a church here”. The Copts informed the police who directly arrived, dispersed the demonstrators, caught three Muslims who had damaged the CCTV cameras on the church wall and gate, and restored peace.

A police force remained in the village, threatening the perpetrators of the violence that they would not get away with it, and that the law would be enforced “with an iron fist”.

This was not the first demonstration against the church in Sultan Basha. The village had witnessed several such demonstrations last July, which led to police closure of a church consecrated to Anba Karass. The incident was especially conspicuous because a security figure had stood up and promised the Muslim demonstrators that there would never be a church in Sultan Basha. Anba Macarius, Bishop of Minya, issued a statement condemning such defiance of the law.

On 31 July, the security chief of Minya was changed, and Minya got a new chief: Major General Magdy Amer.

The church of Anba Karass, which was unlicensed but had applied for legalisation, was more recent than an older, smaller one which the Copts had used for worship for some eight years earlier. This was merely an old house which was inadequate to accommodate a 400-strong Coptic congregation, so Minya Bishopric bought a newer, more spacious house to use as a church, named it Anba Karass’s and, once the 2016 law was passed, officially applied to legalise its status. Following last July’s protests and the the police closure of Anba Karass’s, the Copts went back to worshipping in their old church but, as is obvious from the recent demonstrations, the hardline Muslim villagers wished that this too should be closed. When the police stood up to them, they avenged themselves against the Copts by uprooting their field crops and damaging their irrigation pumps. The Copts: Shehata Adel, Wael Nash’at, Saleh Habib, Nabil Labib, and Samuel Zaki reported such incidents to the police.

The other village which saw demonstrations against a church was al-Zeneiqa in Esna, some 700km south of Cairo. On the morning of Wednesday 22 August 2018, the Copts in Zeneiqa attended Mass in their village church to celebrate the Feast of the Assumption of the Holy Virgin. Once Mass was over and the congregation left, a crowd of Muslim villagers marched up to the de-facto church in which the Copts had been worshipping since 2003, there being no other church in the village. The demonstrators shouting Islamic slogans and demanded that their village should house no church. The police was called; they arrived and closed the church down. They arrested five Muslims and five Copts, even though no Copt had stood up to the demonstrators. Quite the contrary, the Copts had kept to their homes fearing eruption of violence. The Copts caught were: Samy Kamal Bibawi, a lawyer; Nassef Fawzy Shukrallah, an engineer; Shukrallah Fawzy Shukrallah and Fakhouri Fawzy Shukrallah, small landowners; as well as Samir Saeed Shukrallah, a high ranking public servant who lives not in the village but in the town of Esna. All the Copts were arrested while at their homes.

On Friday 24 August, following the Muslim Friday noon prayers, a crowd formed and barely started another demonstration against the church when it was stopped in its track by the police who caught another 10 Muslims.

The hostility of Muslim hardliners against the legalisation of de-facto, unlicensed churches has been an ongoing movement since the 2016 law made provisions for such legalisation. Watani has repeatedly reported on a number of such incidents in villages in the southern governorates of Aswan, Qena, Sohag, Minya, and Beni Sweif; as well as the West Delta governorate of Beheira.

In August 2016, Egypt’s parliament passed the Law for Building and Restoration of Churches, which went into effect the following month. The law made provisions for legalising the status of the thousands of de-facto churches in Egypt, that had been used for worship without licence, provided an official committee from the building authority pronounced the buildings structurally sound and in compliance with civil protection regulations and the churches paid the required legalisation dues.

In February 2018, a Cabinet committee approved the legalisation of 53 churches and church-affiliated buildings in six parishes, out of a total 3730 that had applied for legalisation; in April 2018, another batch of 167 churches were approved. In many cases, this provoked the ire of hardline Muslims who rose to forcibly defy the law. Officials have invariably stressed that the law would be enforced. 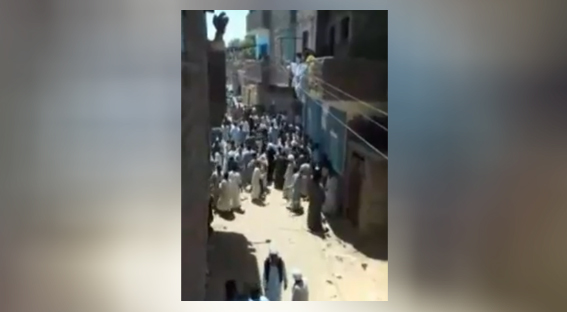