“He is one of the most important caricature artists; he pioneered political cartoons in Egypt and the Arab World.” That was Armenian Egyptian cartoonist Saroukhan (1898 – 1977), and he was being described by Gomaa Farahat, the veteran Egyptian cartoonist who heads the Egyptian Caricature Association.
Farahat was participating in an event held at the Goethe Institut’s Tahrir Lounge in central Cairo to commemorate the 120th birthday of Saroukhan. Under the title “Saroukhan Comes Back”, a commemorative exhibition of his works was held from 25 March and till 4 April. 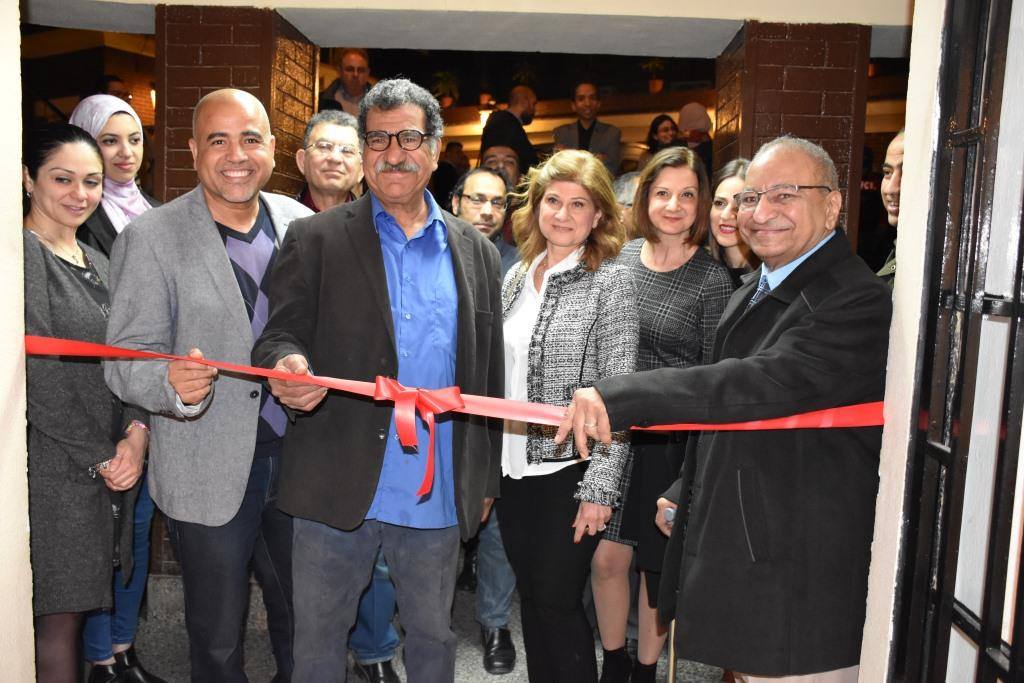 The opening event was attended by Armenia’s Ambassador to Cairo, Karen Levoni Grigorian; Cuba’s Ambassador to Cairo Tania Aguiar Fernández; Ludo Rochet, deputy to the Belgian Ambassador to Cairo; Saroukhan’s son-in-law, as well as his grandchildren who live in Egypt; and Egyptian artist Muhammad Alba, founder of Egypt’s Caricature Museum in the Fayoum village of Tunis, some 100km southwest Cairo. The museum was founded in 2009 and houses works of high artistic value by some 55 Egyptian cartoonists.
“In Egypt’s Caricature Museum,” Mr Abla proudly said, “we are lucky to have works by Saroukhan.”
For Mona Shahin, director of al-Tahrir Lounge, hosting the exhibition crowns Goethe Institut’s support for art in all forms of artistic expression.

Beginnings
Alexander Hagop Saroukhan was born in 1898 in Ardanoush, a town which at that time was part of the province of Batumi in the Russian empire. In 1900, the father, Hagop Saroukhanian who was a trader, moved his family to Butami, the capital city of the province. Alexander and his younger brother Levon showed interest in drawing at an early age and were encouraged by their father and their teacher at a Russian primary school. To the end of his days, Alexander would remember that teacher as the role model who instilled in his mind and soul the love of art.

The family left to Istanbul in 1909, and Alexander and Levon joined the Catholic Viennese Mekhitarian fathers’ school which offered excellent education that focused on languages.
During this period of their lives in Istanbul, the two Saroukhanian brothers started a four-page weekly newspaper at home. Levon was the editor; he collected and compiled articles and hand-wrote them, whereas Alexander was in charge of illustrations. Their work lasted for two and a half years, and was halted owing to discontinued readership, mainly the Saroukhanian family members themselves.
World War I started in 1914, and on its heels the 1915 Armenian genocide by the Turks. The Saroukhanians, however, emerged unscathed; the father and female family members had left Istanbul to Butami in 1912 leaving the boys as boarders in their school which flew the Austrian flag and thus remained unharmed. When WWI concluded in 1918 and the British army controlled the Bosphorus and Dardanelles, Alexander Saroukhan worked as a translator of Russian, Turkish and English in the British army. At the same time, his caricatures found their way to Armenian newspapers and magazines.

Into Egypt
The Saroukhanian brothers made a final flight out of Turkey in 1922, which was becoming menacingly inhospitable to Armenians. Alexander joined the Graphic Art Academy in Brussels in 1922, graduating in 1924 and moving to Vienna where his talent gained appreciation and he made many friends. Among them was Onnig Avedissian (1898-1974), who became a lifelong friend, and whose sister Sirvart married Alexander in 1927. He also met the Egyptian Abdel-Qader al-Shinnawy in Vienna, who was pivotal in bringing Saroukhan to Egypt. In 1924, Saroukhan left for Egypt with more than 125 pieces of his work that he had accomplished while at school.

When Saroukhan first came to Egypt, he knew no Arabic, neither was he familiar with the local people or their culture. He taught art at the Kalousdian Armenian School in Boulaq, Cairo.
Saroukhan displayed 95 of his works at an exhibition in Cairo then in Alexandria. Through these exhibitions, he met Muhammad al-Tabie, a prominent Egyptian journalist who then made it his business to explain to Saroukhan the cultural and political nature of Egypt, and the features of the Egyptian character.
In March 1928, Saroukhan worked as a caricaturist for Rose al-Youssef magazine the chief editor of which was Tabei. It was a political magazine with interest in culture and literature, and Saroukhan became known as a ‘political’ caricaturist. The Tabei/Saroukhan collaboration made them the most important and influential journalists in Egypt for 20 years, moving through a number of Egypt’s most distinctive papers and magazines.

Not just a cartoonist
Saroukhan founded a French-language humour magazine “La Caravane”, published between 1942 and 1945. He also contributed cartoons to Egypt’s foreign language press: La Presse Egyptienne, Image, and the Armenian daily Arev. He held numerous exhibitions in Egypt, Lebanon, Syria, and Romania.
Among Saroukhan’s publications is the book “This War” in which he predicted World War II. It is considered his finest book and defined his satirical talents. He published another book on political caricatures, which he titled “The Political Year 1938”. 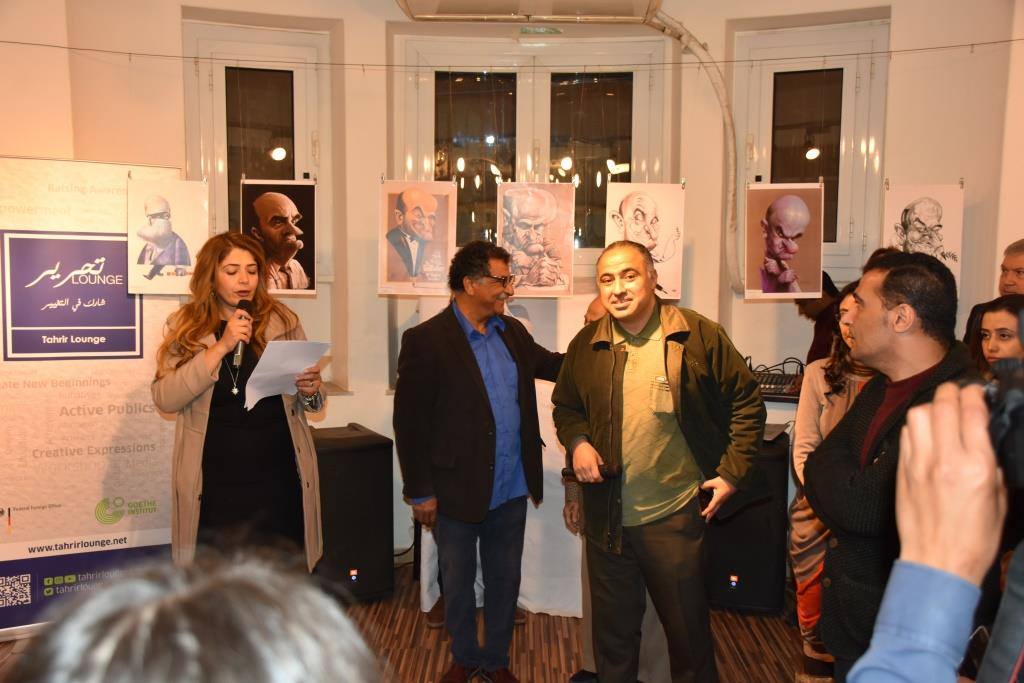 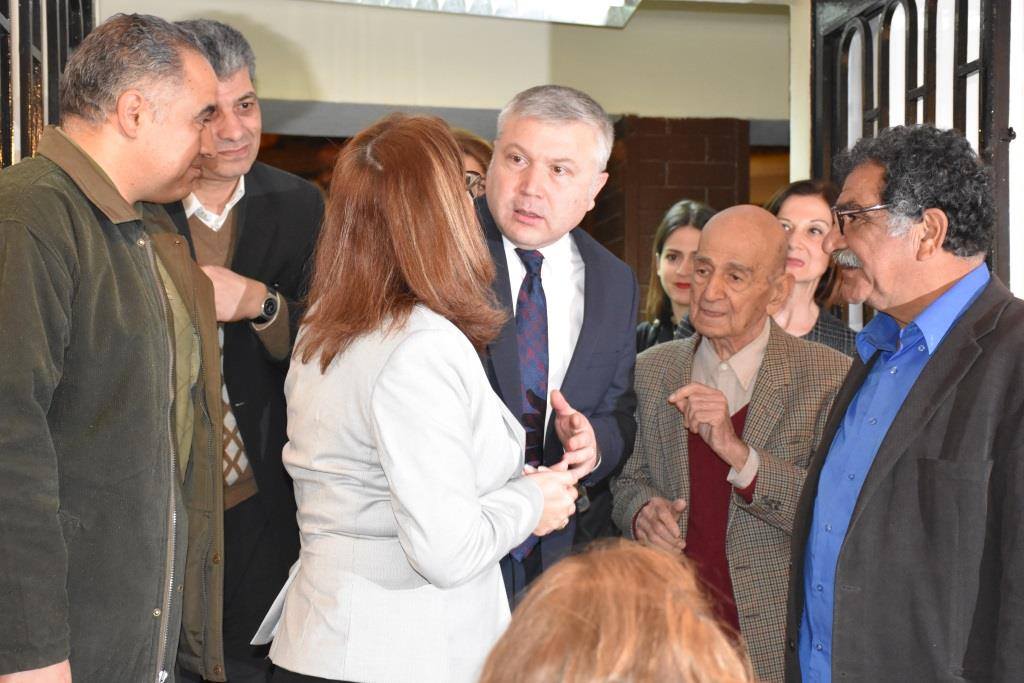 Saroukhan’s gifts were not restricted to caricature, but stretched further to other forms of arts. Besides his books, he composed satirical plays in Armenian, which were very well received by broad audiences.
Saroukhan’s style was singular and independent, vivid, featuring strong movement and exaggeration. During his lifetime, he drew more than 20,000 different caricatures—political, social and humorous.
He knew Egypt and Egyptians very well, their language, traditions, and collective character. He could make them laugh, cry, feel angry or happy.

He created his positive hero “Egypt” whom he represented as a beautiful woman, and al-Masry Effendi, the typical Egyptian bourgeois. He moved on with Egypt throughout its historical upheavals in the 20th century, including the 1952 Revolution which put an end to the monarchy and established Egypt as a republic. 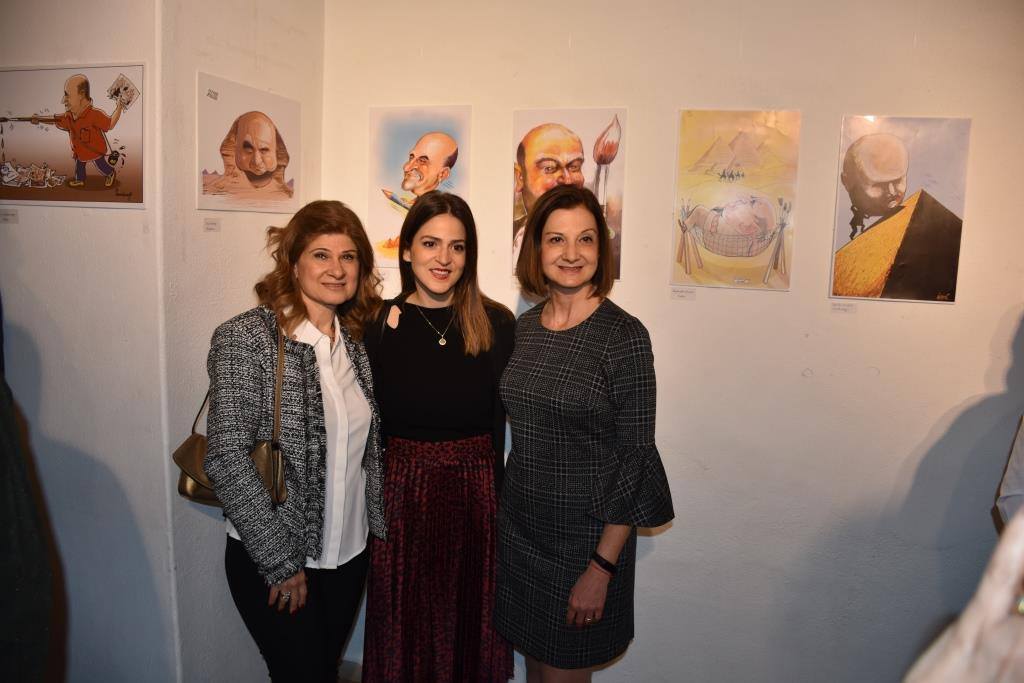 The later phase of Saroukhan’s life, which lasted throughout the 1960s and 70s, was characterised by diversity and expansion in different activities, and also by his travels abroad. This was the phase of large-scale recognition, rise into the outer world and perfection of creative powers. In parallel, he also enjoyed a happy family life. His daughter Seta got married in 1956, and he was granted two granddaughters whom he adored.
Saroukhan won International prizes, from Toronto, New York, Boston, Montreal and his native Yerevan.
In 2006, a street at the Cairo district of New Nozha was named after him.

Creating characters
Artworks displayed at the recent commemoration event in Cairo consisted of portraits of Saroukhan painted by the winners of an international caricature competition launched jointly by the National Library and Archives and the Armenian General Benevolent Union last December. The competition drew participation by 180 artists from 45 countries, among them Watani’s cartoonist Tharwart Murtada.
The first winner of the competition was Yoemnis Del Toro from Cuba; five honorary awards were granted to Marwa Ibrahim and Ahmed Wahid from Egypt; Omar Turcios from Spain; Guo Ye from China; and Antonio Santos from Portugal.
All the winners got valuable books as gifts from the Saroukhan family.
Fawzy Mursi, supervisor of the competition and member of the Egyptian Society of Caricature, proudly said that all the artworks in the competition were of high artistic standard, fit for Saroukhan.
The large number of artists who competed for the contest from some 45 countries, Mr Abla said, reflects the imprint left by Saroukhan, and his world fame in the field of caricature.
He thanked Saroukhan’s family for publishing a number of valuable books on his biography and art. “Yet,” he added, “Saroukhan was not just a cartoonist; he was an extraordinary painter and talented artist. What he did for the history of Egypt’s caricature field was impressive.
“It is said that Saroukhan used a mirror to depict the features and gestures of the Egyptian characters,” Abla noted. “He had his own style not only of depiction, but also of creating characters: most well-known among them is al-Masry Effendi which has become an icon in the history of Egypt’s caricature.
“If Egypt’s caricature is defined by its start at the hands of the ancient Egyptians, the post-1870s years have been marked by Saroukhan’s imprint and vitality,” Abla concluded.

Memories
In her speech, Cuba’s Ambassador pointed out that this was not the first time the Cuban Embassy in Cairo has joint activity with the Egyptian Caricature Association. “And because we believe there is still much more to present, the Cuban Embassy will take part in another celebration to be held next July,” she said.
Renowned Egyptian cartoonist Farahat gave a speech in which he recalled his memories with Saroukhan. “Although born Armenian, he was very much an Egyptian, which is clearly manifested in his artworks,” he said.

Farahat noted how much he had personally learned from Saroukhan. “His art has been and will be the source of inspiration for many generations,” Farahat concluded.
Belgian Deputy Ambassador to Cairo, Ludo Rocher, told Watani that Belgium was ever proud to be the homeland of caricature, a strong art through which any viewpoint can be expressed without the need for words. “In the 1950s and 1960s,” he said, “Egypt saw the publication of an Arabic version of the famous Tin Tin, one of Belgium’s well-known cartoon magazines.”
Watani met Saroukhan’s son-in-law, Garo Neredian, 90, an accountant, who reminisced about his time with Saroukhan.
“He was a distinguished caricaturist; I admired his artworks and articles he wrote for Akhbar al-Youm newspaper.
“I used to drive him to his work since he did not drive,” Mr Neredian said. “It was a good time to spend together. We also used to meet at the club of Armenian art, which closed some years ago.

“I was the lucky man Saroukhan chose to marry his daughter, Seta” he proudly said.
“We have two wonderful daughters, Sossy and Sylva Neredian, and a granddaughter, Nairi.”

Egypt Caricature: A rich history
Even though caricature has been spotted in ancient Egyptian art, its modern form took off in the late 19th century, at the hands of Yacoub Sanua (1839 – 1912), an Egyptian Jewish nationalist activist, journalist, and playwright who in 1877 issued the satirical magazine Abu-Naddara. The magazine, which was the first Arabic-language magazine to use Egyptian vernacular Arabic, a language quite different from literary Arabic, had an immediate appeal with the public but was quickly suppressed as being liberal and revolutionary, and its author banished.
Caricature magazines became very popular. In 1926, al-Baakouka was issued by Mahmoud Amin Khattab, and in 1930, the famed cartoonist Rakha issued Eshmeana. In the 1980s, Mustafa Hussein (1935 – 2014), a caricaturist, painter, and journalist, created the weekly cartoon magazine Caricature with fellow artist Ahmed Toughan.
Among the pioneers of caricature art in Egypt was Saroukhan, the pioneer of political caricature in Egypt and the Arab World.
Other Egyptian greats include Salah Jahin (1930 – 1986), Ahmed Hegazi (1956 – 2011), Mohieddin al-Labbad (1940 – 2010), Ahmed Toughan (1935 – 2014), and George Bahgory (born 1932).
The Caricature Museum in Tunis, Fayoum, boasts a rich collection of the works of
caricature giants such as Hussein, Saroukhan, Toughan, Hegazy, Bahgory, Jahin and al-Labbad, as well as contemporary cartoonists such as Amro Selim and Doaa al-Adl, a female cartoonist.