“Art removes barriers between peoples and unites humankind,” with these words, Father Boutros Danial opened the 70th edition of the Catholic Centre Film Festival held this year under the theme “70 years of giving”, over eight days starting 20 May 2022. The theme reflected the role played by the Catholic Centre and its annual film festival, stressing the humanitarian and artistic mission it has been loyal to for 70 years. 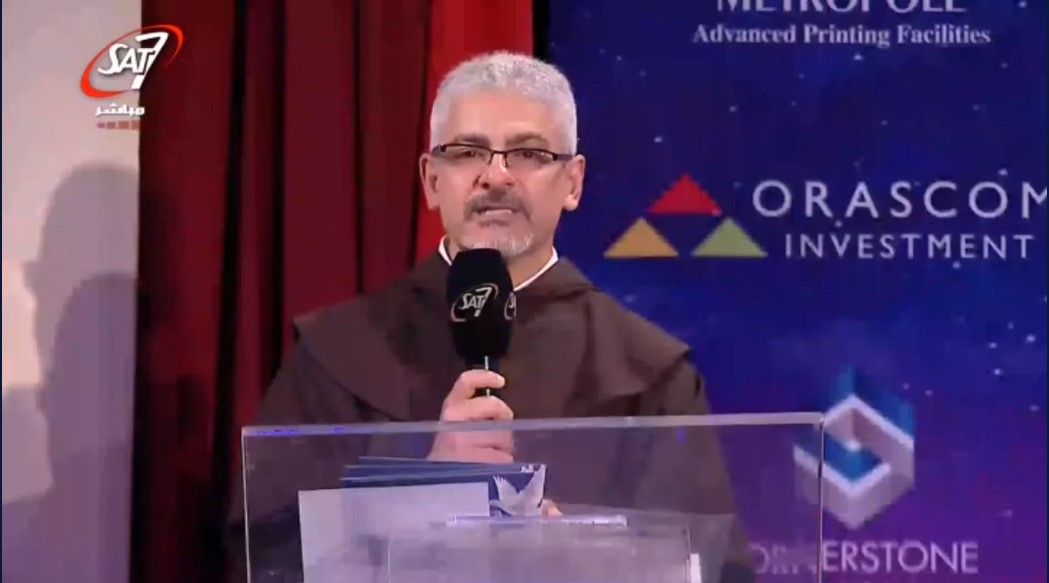 The Catholic Centre Film Festival was launched in 1952; the Catholic Cinema Centre itself had been founded in 1949 at the hands of Farid al-Mazzaoui (1913 – 1988) who was a critic, cinema historian and a prominent figure among those who built Egyptian cinema. Mr Mazzaoui encouraged the Franciscan Friars in Egypt to establish a cinema centre to educate the young.

The first Catholic Cinema Centre Film Festival was born in 1952 with the express aim of supporting filmmaking with human and moral values. It is the oldest film festival in Egypt, and is traditionally highly appreciated and well attended, having over the years earned a reputation for being a respected, well-heeled, generous event on the Cairo film scene. Franciscan Father Boutros Danial currently heads the Catholic Centre and the film festival.

This year, the festival resumed film screenings to audiences, and activities such as seminars. It was a welcome move following a halt last year on account of coronavirus pandemic.

Amr Salama’s Barra al-Manhag (Outside the Curriculum) won this year’s Best Film Award. It competed with four other films shortlisted by the jury out of 28 competing films shown in 2021 in cinema theatres or online platforms. The other four films are Ahmed Rashwan’s Qabel lil-Kasr (Breakable); Islam Belal’s Lel-Egar (For Rent); Mohamed Amin’s al-Mahkama (The Court); and Ahmed Yousry’s Ritsa. 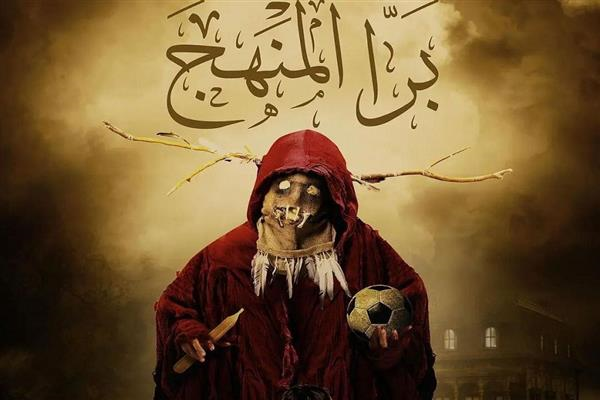 The film belongs to the humanistic drama and fantasia genre; the protagonist reviews his personal life journey through an orphan boy who abruptly comes into his life. The orphan, Nour, dares break into a haunted house facing his school, only to find a ghost living there. The ghost becomes his friend and mentor, and their relationship helps him achieve mischievous plans. The film raises societal issues such as bullying, abandonment, and orphanhood. It touches upon historical facts and stories. 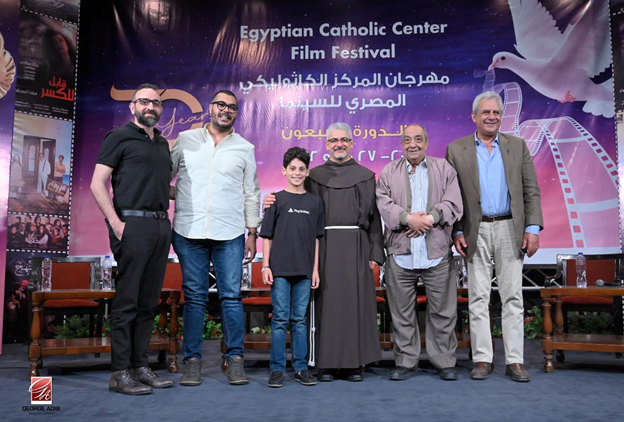 Best Actress Award went to Hanan Motawei for her role in Qabel lil-Kasr. Awards for outstanding performance went to Hanan Soliman, Fathi Abdel-Wahab and Gamila Awad for their roles in al-Mahkama, and May al-Ghiti for her role in Ritsa. The Jury’s Special Award was granted to Khaled al-Sawy for his role in Lel-Egar.

The festival this year honoured the names of comedians Samir Ghanem (1937 – 2021) and Dalal Abdel-Aziz (1960 – 2021) who had long been the sweethearts of cinema fans. They had married in 1984 and had two daughters, Donia and Emmy, both acclaimed actresses each in her own right. Ghanem and Abdel-Aziz both died from coronavirus in 2021 a few months apart. On opening night, a visibly moved Donia received her parent’s award, saying she was grateful for the Catholic Cinema Centre’s recognition.

Another comedian, Samir Sabry (1936 – 2022) who had died on the festival’s opening night was also honoured by dedicating the 70 th edition to his name together with Samir Ghanem. Sabry was not only an actor, but was a gifted presenter and talk show host.

The festival also honoured a number of media and cinema figures including Dorria Sharaf El Din who was granted the Media Excellence Award. Sharaf El Din is a poised, well-spoken and well-respected media person famous for her “Cinema Club” programme which she presented for some 30 years till it was stopped in 2009. She is also a writer and politician, and was Egypt’s Media Minister in 2013 – 2014. 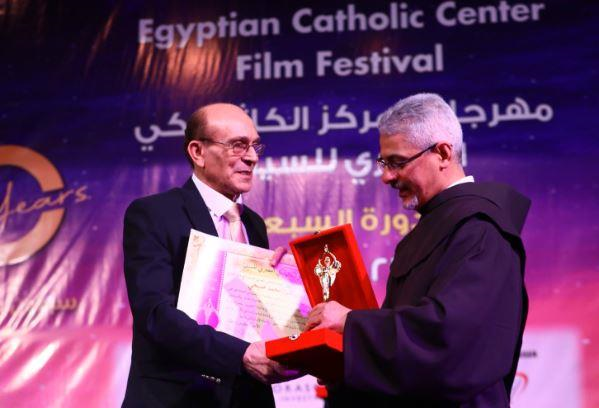 The Farid al-Mazzaoui Award went to film director Magdy Ahmed Aly; and the Father Youssef Mazloum Award to veteran comedian Mohamed Sobhy whose diverse works in theatre, film and tv are of singular quality. He said he had been honoured six times by the Catholic Centre, but that this seventh especially overjoyed him because it carried the name of Fr Youssef Mazloum who had supported him back in the 1970s by offering the centre’s theatre to host Sobhy’s graduation project—Shakespeare’s Hamlet— when no other theatre would host it.

“Art is a celebration of existence and life,” Fr Boutros said in the closing ceremony. “Egypt is rich in creative artists who illuminate the darkness.”

For his part, Monseigneur Claudio Lurati, Bishop of the Catholic Latin Community in Egypt stressed that the Catholic Church encourages the arts in general, and sees that through them, peoples of the world share their rich cultures, learn about one another, and live in peace. 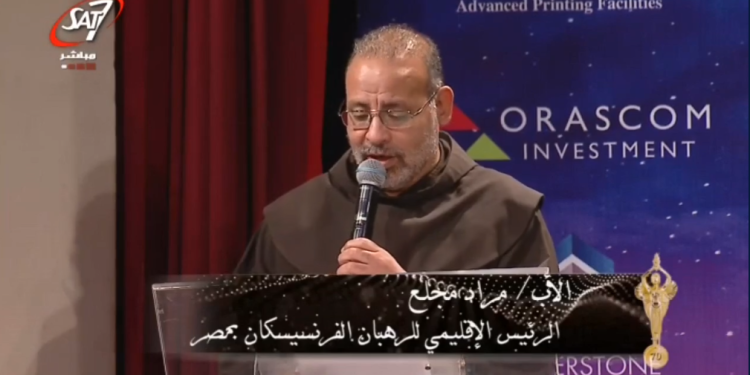 During the closing ceremony Fr Murad Majla, Regional President of the Franciscan monks in Egypt, announced the establishment of two branches of the Catholic Centre in Alexandria and Luxor, to screen the winning films with the aim of spreading awareness of the fine art of cinema.

Addressing the audience, Fr Murad said: “I greet you with the greeting of Saint Francis, Peace and Goodness. Film has a great ability to change society; a single scene can do a lot.”