A news item circulated the first week of July 2022 ran to the effect that Cairo Governor Khaled Abdel-Aal handed 24 pottery artisans, whose status as artisan potters had been legalised by Cairo governorate, lease contracts to pottery studios in al-Fawakhir (literally “The Potteries”) village in Old Cairo. 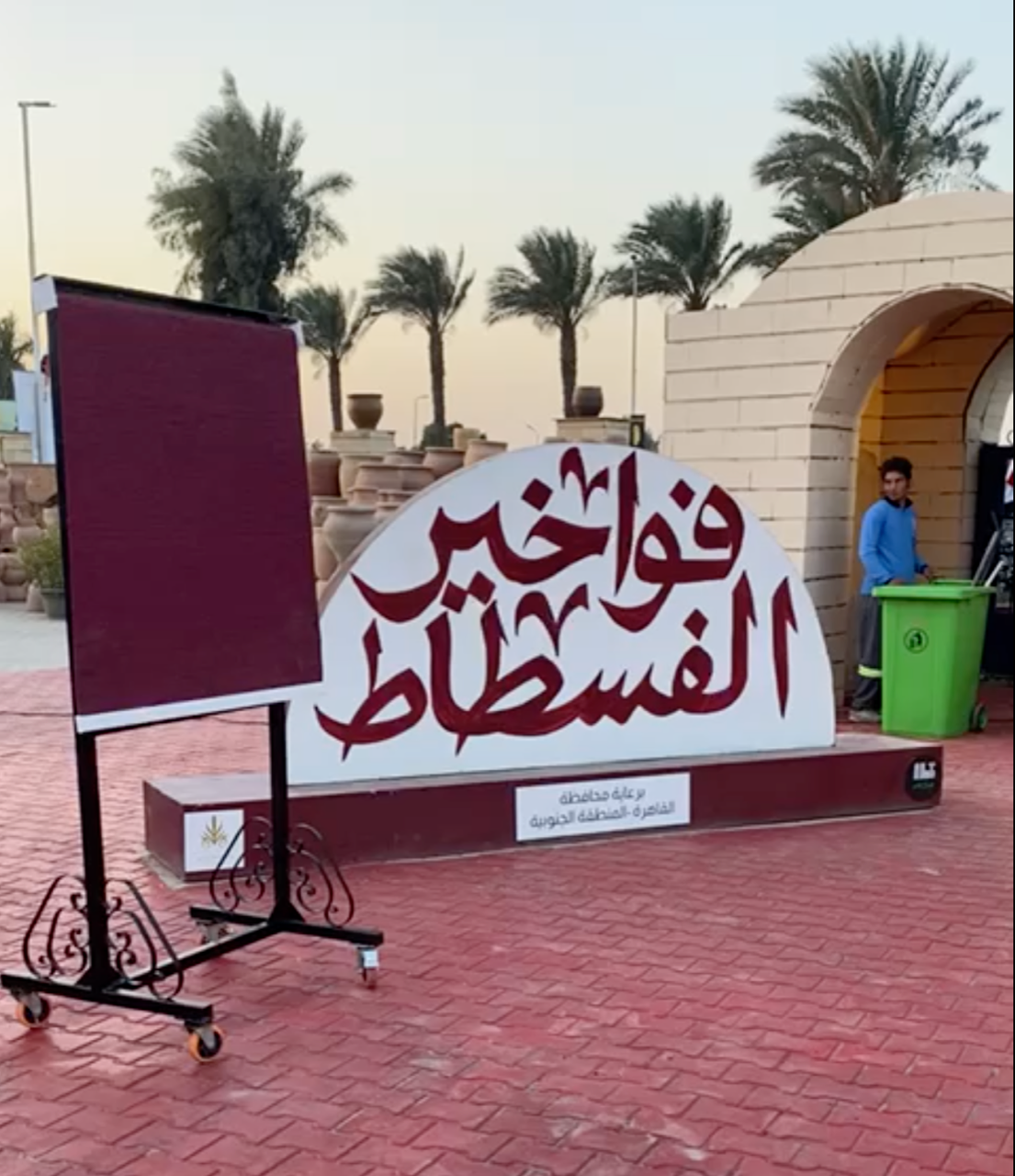 The village is a modern reincarnation of a centuries-old complex for pottery production, which stood at the outskirts of Cairo. Today, the site has been redeveloped into an eco-friendly production facility, and opened in November 2021. The purpose was to preserve and revive a heritage craft with a history that goes back to predynastic times in ancient Egypt where Egyptians used meticulously crafted pottery goods as cups; plates; cooking pots; jars; containers for food and beverages, and to store seeds and grain; also as things of beauty such as flower vases, statuettes of birds and animals, and candlesticks.

Al-Fawakhir was built on 13 feddans of land (1 feddan = 4,200 sq.m) close to the Hanging Church and the mosque of Amr Ibn al-Aas in Fustat, Old Cairo; also in the vicinity of the National Museum of Egyptian Civilisation in Fustat. It includes 152 fawakhir. 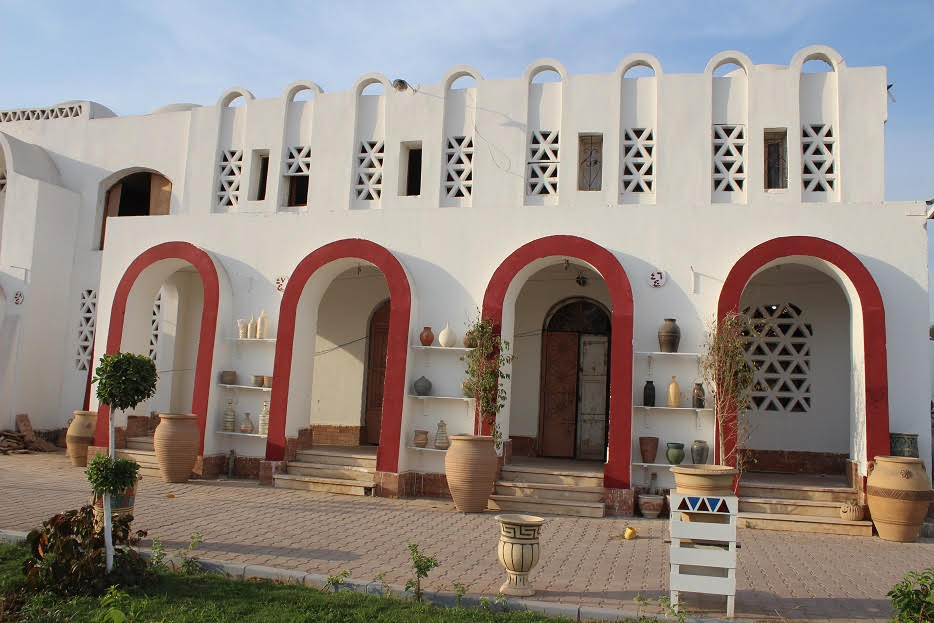 For years on end, visitors to Old Cairo would be greeted with lines upon lines of pottery goods up for sale. Pottery workshops that went back to the first half of the 20th-century were located behind Amr Ibn al-Aas Mosque; the potters would display their goods in street stalls to attract buyers. In 1962, Cairo Governorate transferred 300 workshops to the Old Cairo area of Batn al-Baqara, a place transformed from pig breeding to a spot for pottery production. As time went by, however, the introduction of modern technology household goods and plastics increasingly drove pottery out of the market. Only 70 workshops remained out of the original 300; many potters and their children left the craft and went into other activities. 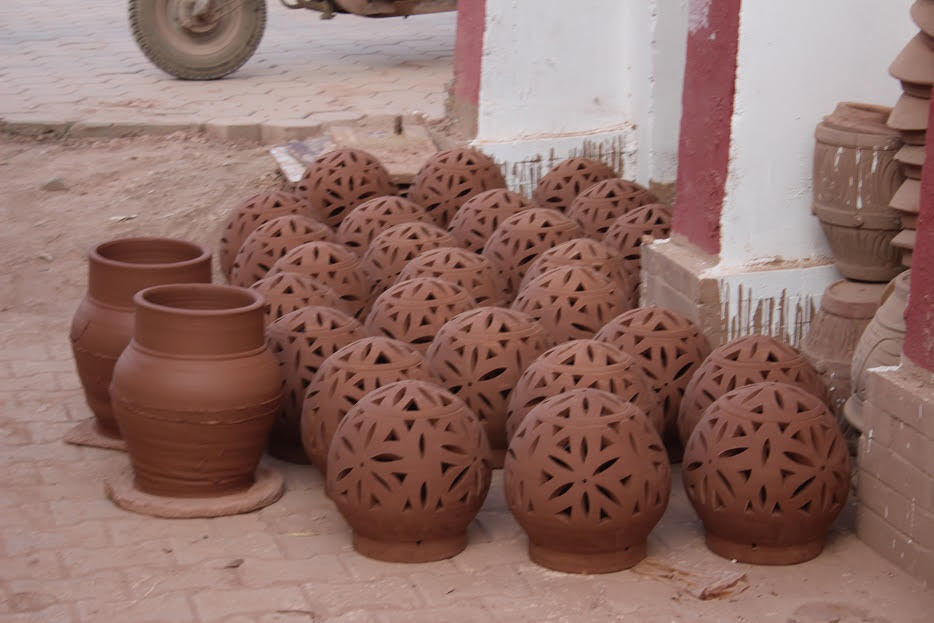 In 1999, the then Minister of State for Environmental Affairs, Nadia Makram Ebeid, decided to close all the pottery workshops in Batn al-Baqara, because the kilns contributed heavily to environmental pollution.

A new, modern village was planned in Fustat, the original site of pottery production, behind Amr Ibn al-Aas mosque, to house modern eco-friendly potteries, fawakhir. Work started on the project in 2006, with US-Italian aid to the tune of EGP65 million as a grant to support the heritage craft. The project was scheduled to open in 2007.

Unfortunately, however, the financing was insufficient and, with the onset of the 2011 Arab Spring and its aftermath, the project stalled for close to 14 years until stability reigned and the Egyptian government could provide the funds needed. 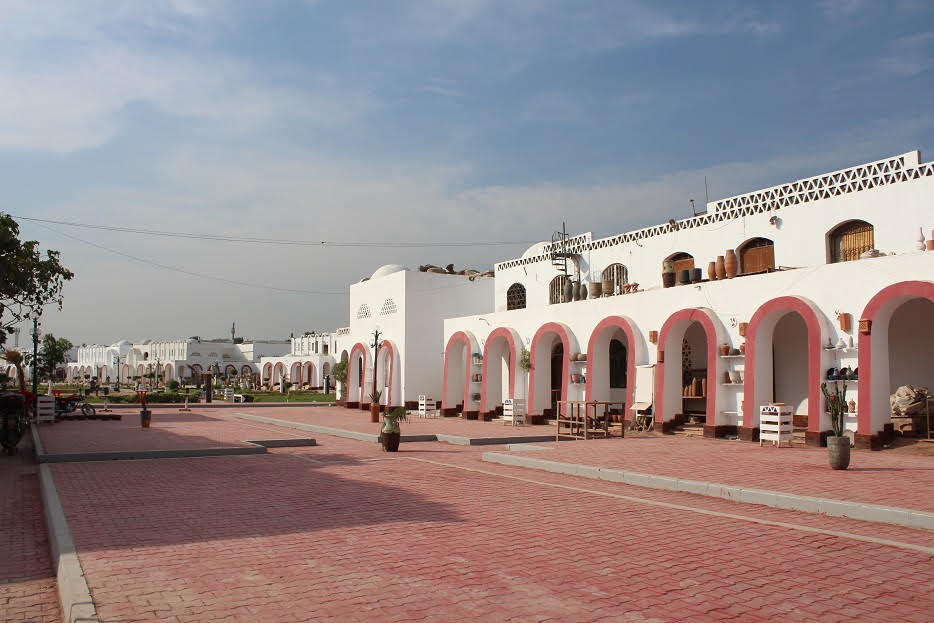 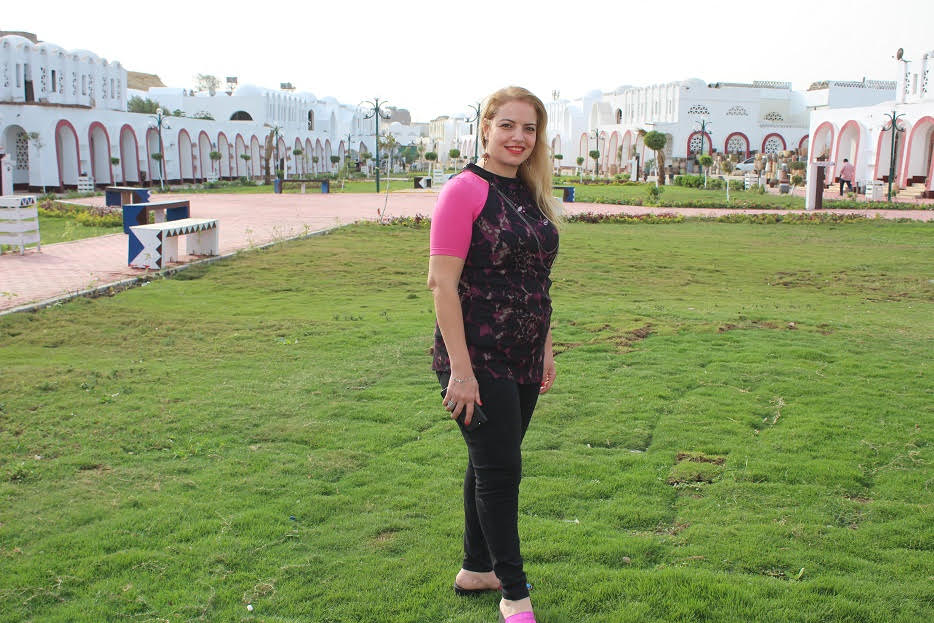 The development of al-Fawakhir village was done with the aim of preserving the ancient handcraft, and promoting the pottery market locally and globally. It was also done with a view to making al-Fawakhir a tourist attraction that introduces visitors to pottery, one of the oldest traditional crafts in the world.

Apart from providing the pottery studios with eco-friendly kilns that run on gas or electricity, the development work involved painting the buildings, landscaping, and providing all utilities in a way that reflects the beauty of the village. 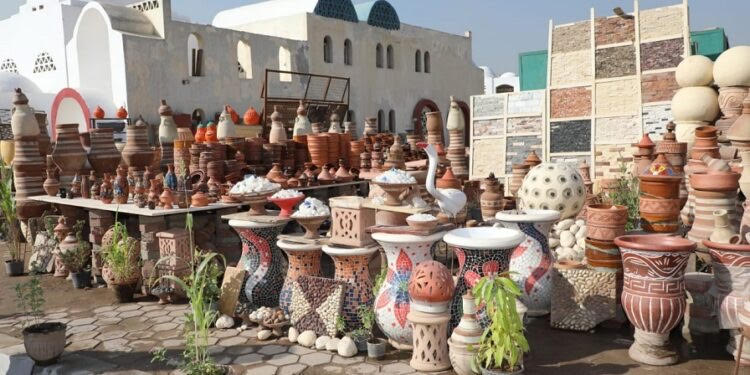 An exhibition centre is used to display the goods of pottery and glazed works.

Al-Fawahkir village is now a reputable centre for modern pottery, where visitors can tour the pottery galleries and showrooms and enjoy the serenity of the greenery surrounding the place. Visitors can buy colourful glazed potteries, including pots, vessels and decorative items that are sold much cheaper than in the shops in Cairo. 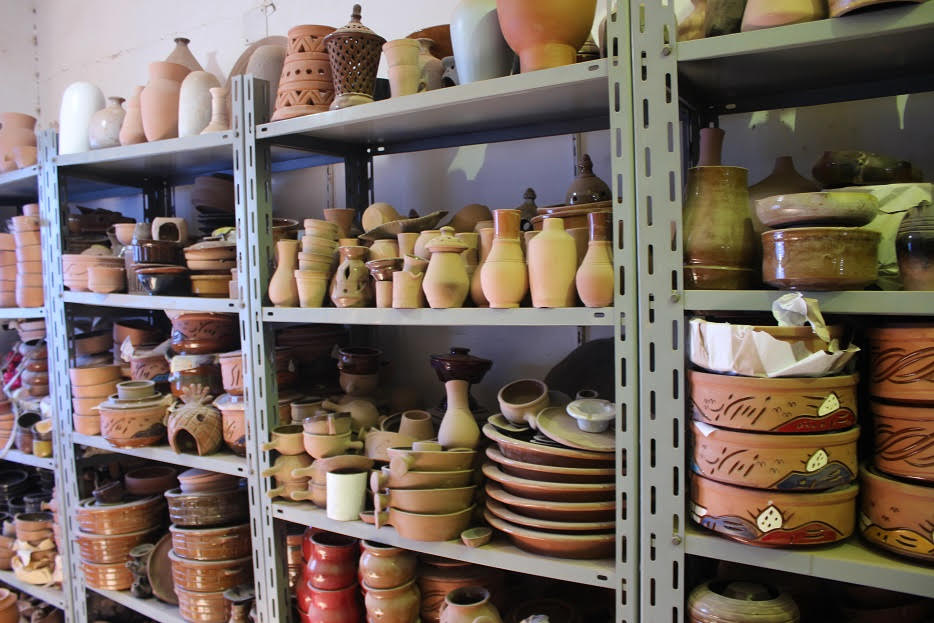 Chief Executive Officer of Suez Cement Group of Companies (SCGC) which supported the renovation of al-Fawakhir, Jose Maria Magirna said, “The group is honoured to collaborate with Cairo governorate to transform al-Fawakhir from a derelict, economically defunct area into a vibrant, functioning, and sustainable village. The project adopted an innovative approach: the rehabilitation of an entire community, starting with infrastructure development and encompassing comprehensive economic and human development initiatives.”

In a meeting with the artisans, Cairo Governor Abdel-Aal listened to their demands and suggestions to develop and preserve the craft. He promised help with regular maintenance of their kilns, in cooperation with the Arab Organisation for Industrialisation. He also pledged to help the artisans market their goods.

The Governor promised as well to study the workers’ request for health insurance. 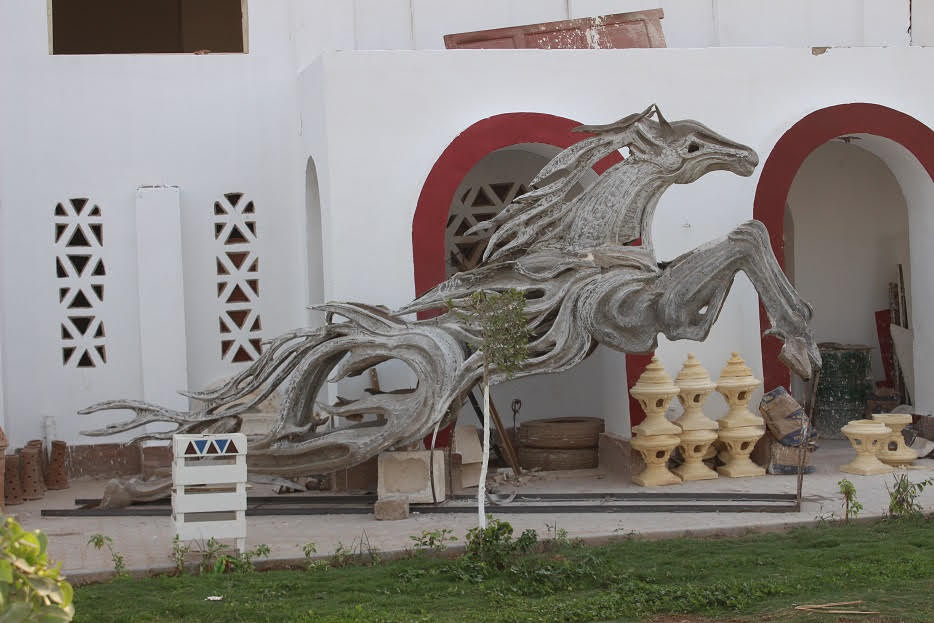 Governor Abdel-Aal announced plans to build a technical school in order to teach students the skills of the craft. He discussed with the artisans the idea of e-marketing their products, and holding various exhibitions for that purpose. He confirmed that a board of trustees would be elected for the village, and that it would include members from among those who work there. They would coordinate with the Ministry of Tourism, he said, to place al-Fawakhir on tourist itineraries.

Beautiful meticulously made pottery, exquisite colours, some items for everyday use such as plates, cups, and bowls; some for innovative decorative purposes; and some masterpieces that speak of heritage; this is what Watani found as it paid a visit to al-Fawakhir. 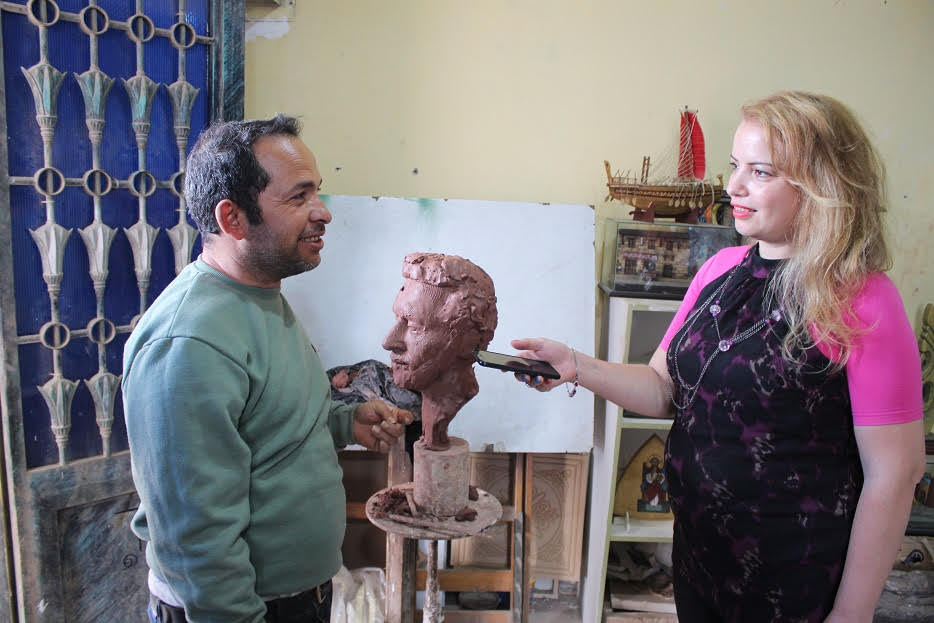 The artisans spoke of the past village and it’s reincarnation into the present one that opened November 2021.

Artisan Ihab Shaker told Watani that the village has seen a qualitative change in terms of working conditions and facilities, leading to more meticulous, innovative work, and higher revenue to those working in the field and to the country as a whole. 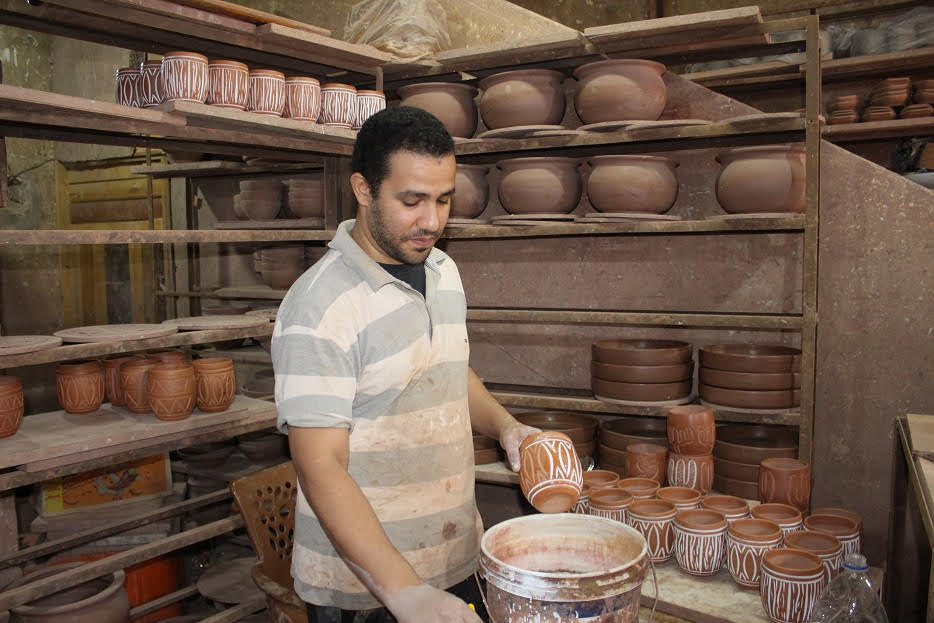 The pottery industry, Mr Shaker said, is not a costly one; it needs no great capital outlay. Unlike industries dependant on modern technology, in which it is difficult for us to compete, pottery and ceramics can operate as small and medium industries in which we excel. “We have the local raw materials, the requirements for the industry, and the skilled artists and the trainers. A leap in this industry is easily possible, and could act as a source of hard currency,” he said. 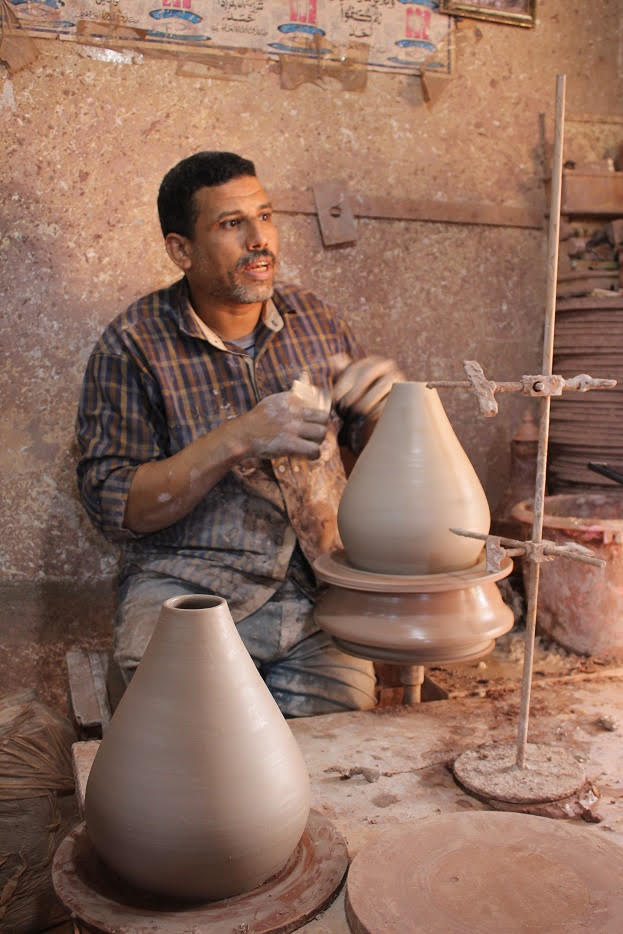 Mr Shaker was so happy with the village that he said he wished there would be one such village in districts all over Egypt. He also called on the government to establish a school for pottery where the students of primary and preparatory schools may study the art and skills of the pottery and ceramics profession side-by-side with the regular curriculum. That way, he said, a graduate may directly enrol in the profession once he or she leaves school.

Mustafa Saber explained to Watani the technique of pottery making. “The raw material,” he said, “comes from Aswan in the south in the form of slabs of clay which are sent to mills to be crushed into powder. Water is added to form a paste which is then formed in the required shape, either by hand or on the potter’s wheel. The shapes are left to dry before firing them in the kiln; in case of glazed pottery, the glaze is applied then the product is fired again.” 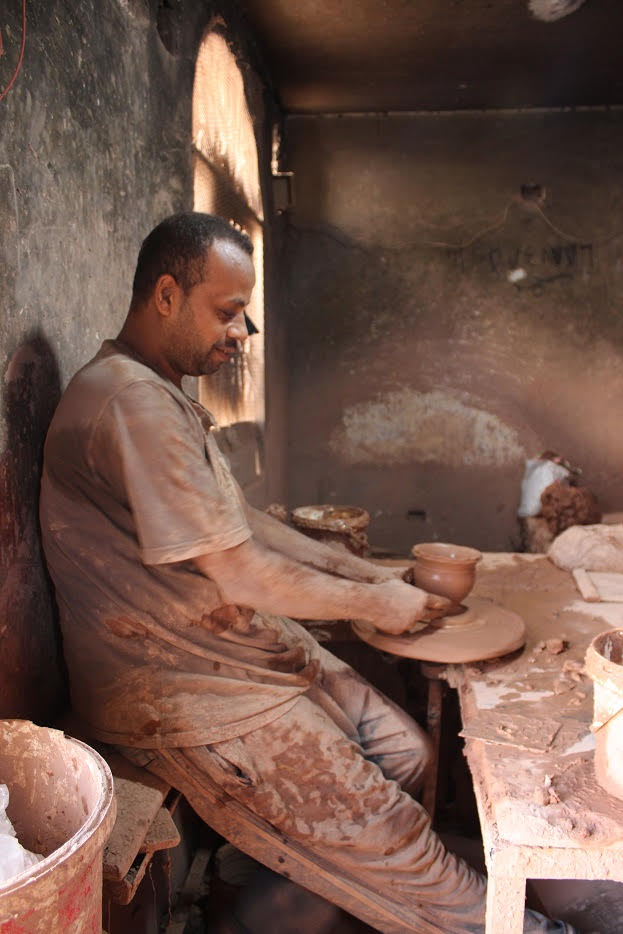 “We usually produce seasonal artworks three months ahead of the season, such as Christmas trees or Ramadan lanterns,” Muhammad Bahaa’, another artisan, said.

Malak Samir, owner of a workshop for producing pottery, said that in the past, they used to burn using rice straw, cane bagasse and wood, which accordingly led to pollution. “Now the place has become clean and eco-friendly, a healthy spot for professionals who encounter job hazards of allergies and asthma.” 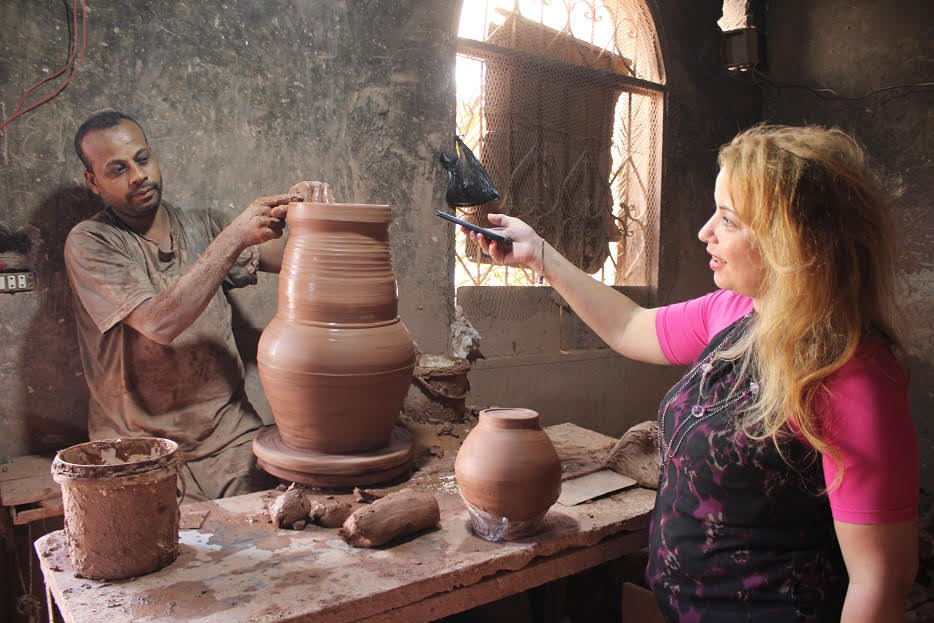 For Mirna Wael, a 2020 graduate of Applied Arts, her specialisation in pottery arts brought her to al-Fawakhir. “I decided,” Ms Wael told Watani, “that once I graduate I would work at the village. I apprenticed for six months at a studio, and this gave me an invaluable learning experience especially in glazing, colours and oxides, and firing. Then I decided to go on my own. I partnered with other young persons who shared the same outlook; we got our own place, went into production, and e-marketed our products.” 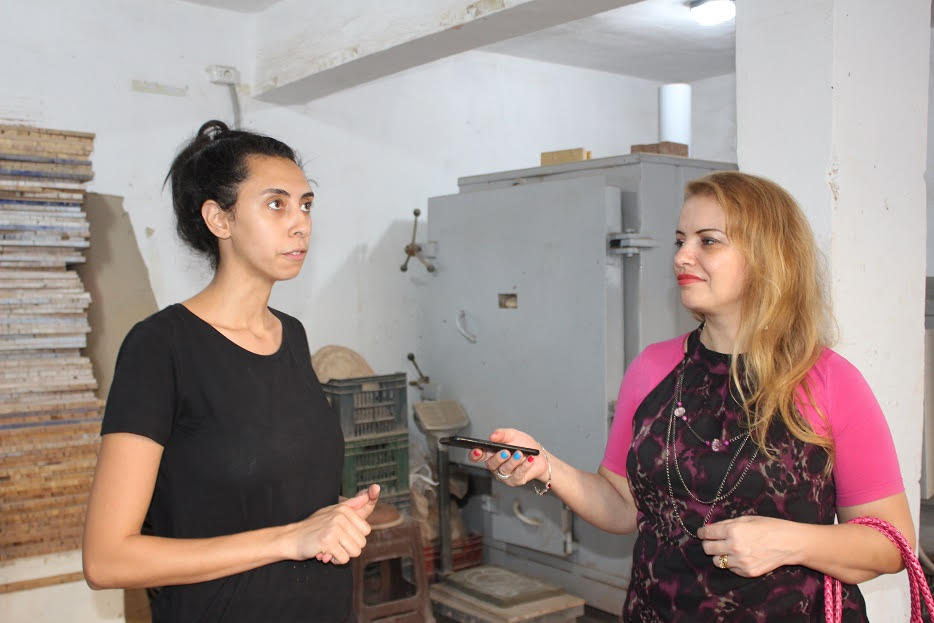 Ms Wael loves the electric kilns, saying that pottery and ceramics get fired in them evenly, even though they cost higher than gas-fired kilns. But she also complained of the initial cost of installing the gas kilns, since just applying for the gas costs anywhere between EGP36,000 to EGP38,000, a cost which she describes as prohibitive especially for startups. She called on the government to review the costs of gas and electricity; also to hold regular exhibitions to help with marketing the potters’ works.

One of the owners of the pottery studios is Ahmed Zaky, former head of the Association for the Pottery and Ceramics Industry, and currently the vice-president of the association, talked to Watani. He started by profusely thanking President Sisi for drawing attention to pottery as a heritage craft during his opening of the annual handcraft exhibition Turathna (Our Heritage), and also government ministers and senior officials for their part in bringing to life al-Fawakhir. 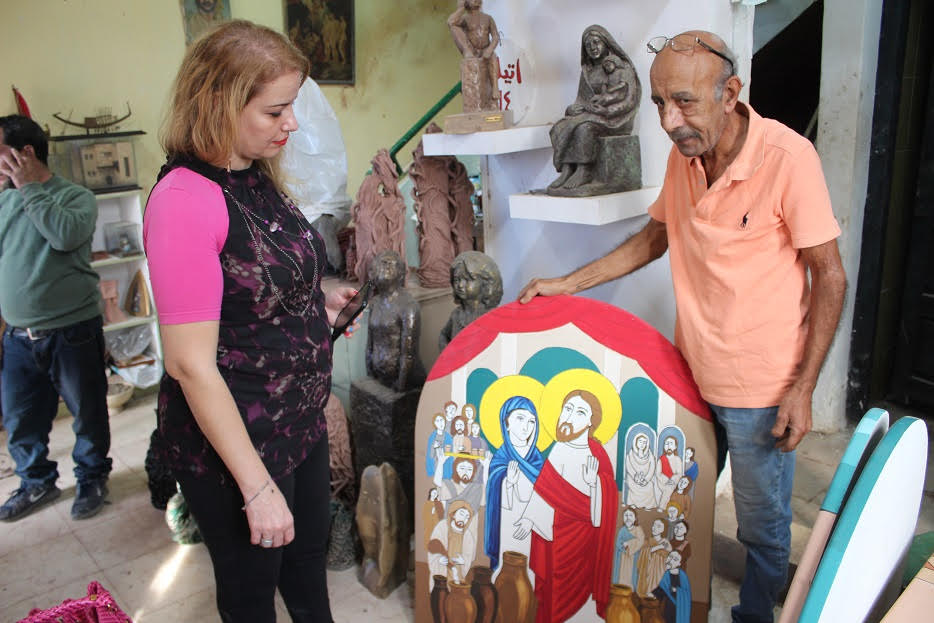 Mr Zaky deplored the fact that young men today are not interested anymore in pottery making, “possibly because of all the hardships that beset handcrafts in general, making them no longer competitive in our modern world. We face a dearth of younger artisans; there are so few young persons to whom we could hand over our experience.”

Yet the opening of al-Fawakhir has given rise to new hopes for the future. “Students of the fine and applied arts are eagerly coming to visit us here; many to work on graduation projects. A number of the sons and daughters of our artisans have decided to join schools of fine arts and go into their fathers’ profession with which they have been familiar since childhood.” 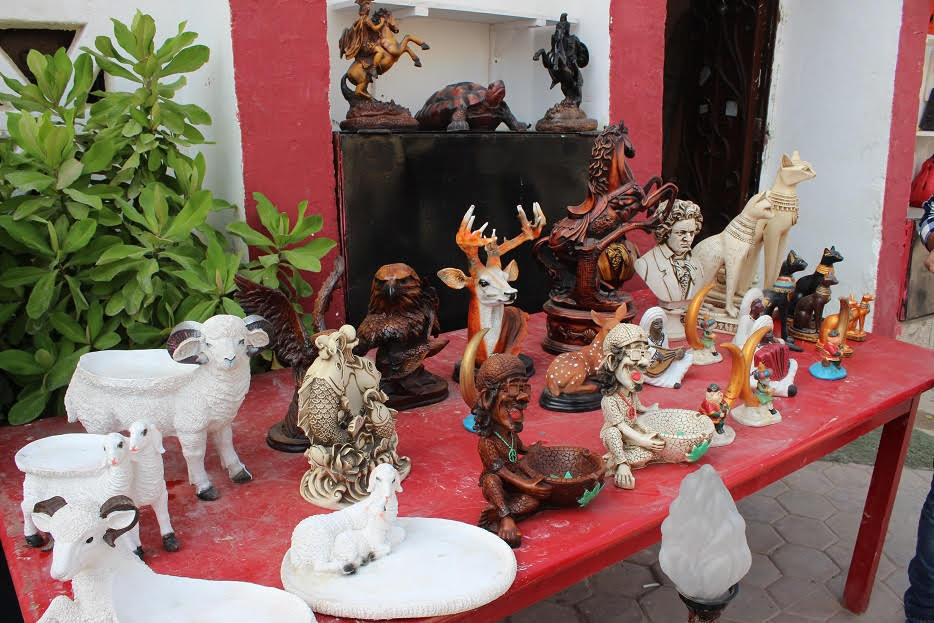 As to the artisans, Mr Zaky expressed a wish that they would be granted health insurance and pensions, also a social club where they could spend time with family and friends. This should help put big smiles on the potters’ faces.