As this year closes, the Egyptian Museum in Tahrir marks 116 years since it first opened. Coincidentally, the Grand Egyptian Museum prepares to open in 2019. What is to become of the old, venerable museum? 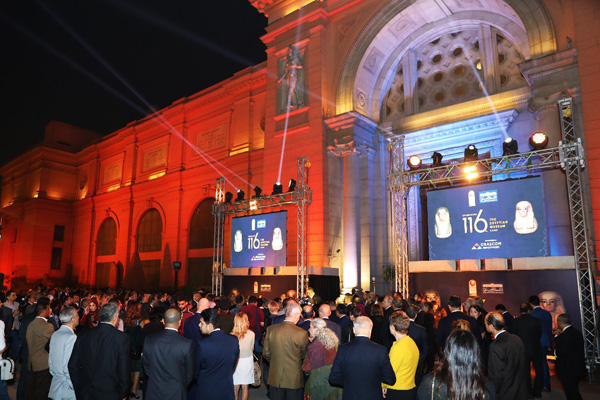 With 2019 scheduled to witness the opening of the Grand Egyptian Museum, GEM, located in a prime spot on the Pyramids Plateau in Giza and set to house the largest ever Egyptian collection, the question arises: What is to become of the venerable Egyptian Museum in Tahrir Square, Cairo, which has since 1902 housed so much of Egypt’s treasures? 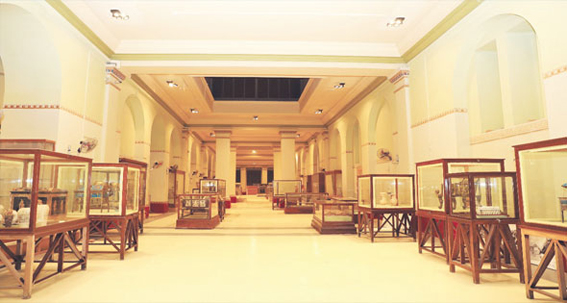 The question is especially relevant given the huge number of antiquities already moved, or in the process of being moved, from the Tahrir Square museum to GEM. Not least among these antiquities is the legendary Tutankhamun collection which has traditionally drawn droves of visitors to the museum. Tutankhamun, famous as the boy king since he was 19 years old when he died, was Pharaoh from 1332 to 1323BC. His tomb was discovered intact by the Briton Howard Carter in 1922, and remains to this day one of the most sensational archaeological discoveries of all time.  Among the artefacts moved to GEM from his collection at Tahrir was his sixth chariot, moved in May 2018

It will never die

This yearend marks 116 years on the opening of the Egyptian Museum in Tahrir.

To honour the occasion, a grand celebration was held at the museum. Presiding over the event was Egypt’s Antiquities Minister, Khaled al-Anany, and on hand to participate in the event were Education Minister, Tarek Shawki; Social Solidarity Minister, Ghada Wali; Tourism Minister, Rania Mashat; Planning Minister, Hala al-Saeed; and Transport Minister Hisham Arafat; as well as a large number of former ministers, foreign ambassadors to Cairo, current and previous MPs, and journalists and media figures. 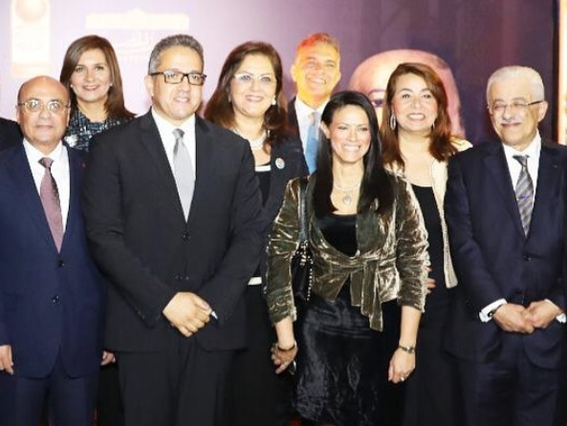 “Our ceremony this evening is to tell the world that this museum will never die,” Mr Anany said. 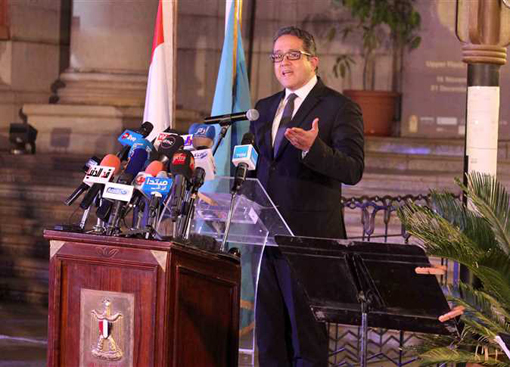 His words rang a true note full of hope. The museum is being fully renovated and modernised, with help from lovers of Egyptian civilisation. From outside Egypt, Mr Anany said, the European Union is funding renovations in collaboration with five major European museums: the Museum of Turin in Italy, the Louvre in Paris, the British Museum in London, the Egyptian Museum in Berlin, and the Rijksmuseum Van Oudheden in Germany. Egyptian institutions, he said, include the Bibliotheca Alexandrina (BA) and Orascom Investment Holding whose chairman Naguib Sawiris said the company was interested in developing Egypt’s historical sites to show off the exceptional richness of the Egyptian civilisation. 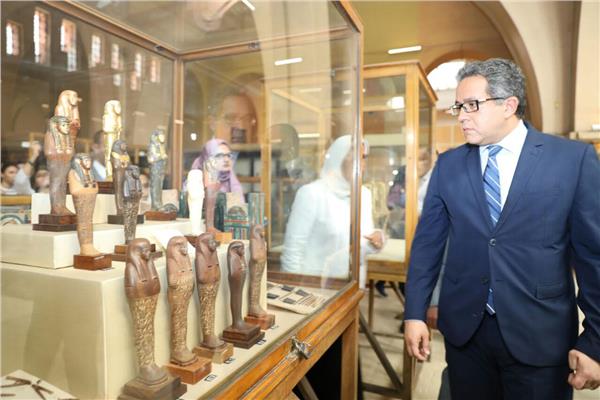 Mr Anany said that, to begin with, the museum’s internal walls and floors have been renovated in the original colours and patterns. The walls were painted light green, he said, and the floor tiles designed to look like soft limestone. The glass of the windows in the museum’s ceiling was changed to filter out UV rays to prevent radiation from the sun reaching the displays.

According to Sabah Abdel-Razek, Director-General of the Egyptian Museum, UNESCO too is into the modernisation and development of the Tahrir Museum. As a first phase, she said, signboards have been installed in the garden, at the entrance gates, as part of the first phase of the development project. These signs include general guidance and useful information to visitors. 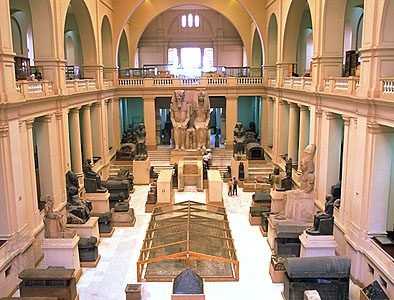 The second phase, Ms Abdel-Razek said, includes developing the museum’s gateway, lighting, ventilation, firefighting, and setting up a new scenario for showcasing antiquities in the museum. This includes the replacement of some 4,500 items of the Tutankhamun’s collection with the one belonging to Tuya and Yuya.

Ms Abdel-Razek talked about the collection that would replace Tutankhamun’s in its place of honour in the Tahrir Museum. She said the Yuya and Tuya tomb was discovered in 1905 in the Valley of the Kings on the West Bank of the Nile in Luxor, almost three years after the Egyptian Museum in Tahrir was officially opened.

Yuya was a powerful Egyptian courtier during 18th Dynasty Ancient Egypt (1550 – 1292BC). He was married to Tjuyu (also written Tuya), an Egyptian noblewoman associated with the royal family which held high offices in the governmental and religious hierarchies. Their daughter, Tiye, became the Great Royal Wife of Amenhotep III, mother of Akhenaten who is famous as the father of monotheism, and the grandmother of Tutankhamun. 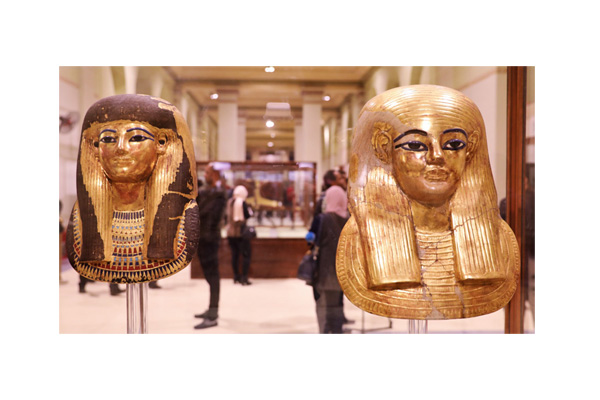 A special exhibition highlighting the Tahrir Egyptian Museum and the story behind its construction was on show in the museum’s foyer during the recent celebration.

Ms Abdel-Razek said that the exhibition was divided into three sections. The first is a documentary exhibition showing the museum’s original blueprints designed by French architect Marcel Durvein, and photographs featuring Abbas Helmy II, Egypt’s Khedive at the time, placing the building’s foundation stone in the presence of princes and high-ranking officials. Photographs showing the different stages of the building’s construction, the pen used by Abbas Helmy II to write a few words in the museum’s guest book, and a memorial stamp and coin from that time rounds off this part of the exhibition. Al-Ahram Weekly describes the exhibits in detail: “The tools and instruments that were used in laying the museum’s foundation stone in 1897, including those used in signing the khedival decree to construct the museum, are also on show. They include the pickaxe, trowel, hammer and a wooden porringer embellished with silver decorative elements that were used for the opening, as well as the inkwell and quill used by the khedive.

“A collection of maps, celebratory medallions and black-and-white photographs of the foundation and construction of the museum are also among the objects on display. Two copper desk clocks decorated with foliage ornaments and angels that once decorated the desk of French archaeologist Gaston Maspero, the first director of the museum, are also on show.

“A volume of the Journal d’Entrée, created by the French archaeologist Mariette to register every object that entered the collection, accompanied by a summary description and essential data on its provenance and location, is on show.” 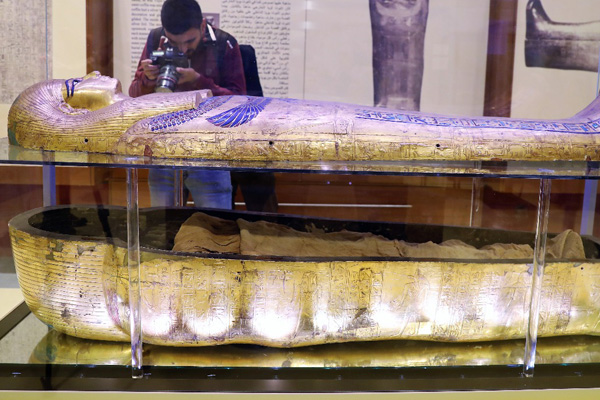 In place of Tutankhamun

The recent celebration featured an exhibition of the mummies and ornamented coffin covers of ‘Yuya’ and his wife Tuya.

The Yuya and Tuya collection had been on show on the museum’s second floor in a less-visited area. Now it is set to occupy a place of honour in a larger hall in the foyer of the second floor.

A prime item in the collection is a 20-metre-long papyrus said to be the longest in Egypt, inscribed in hieroglyphics depicting parts of the Book of the Dead and other ancient Egyptian incantations in beautiful colours. Upon its discovery the papyrus was divided into 34 segments for adequate storage. It was then kept in the basement of the museum until a few months ago when Egyptian restorers worked to prepare it for display. 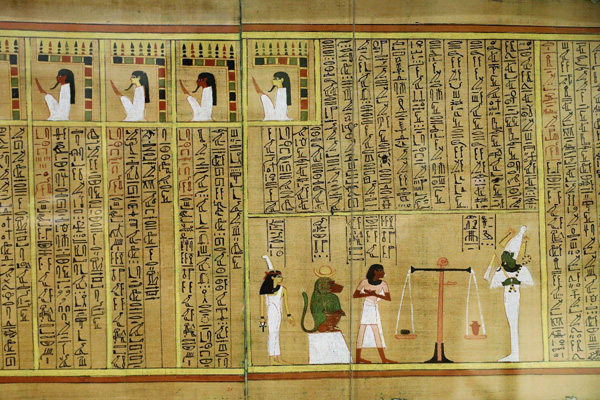 The new Tahrir museum will also display the Tanis collection which goes back to the 20th and 21st Dynasties (1189 – 945BC) and includes a gold mask that will replace Tutankhamun’s mask in the museum, and is second only to Tutankhamun’s in beauty and artistry, according to Ms Abdel-Razek.

The Egyptian Museum in Tahrir was, throughout the years since it opened in 1902 and until 2017 when antiquities were moved from it, home to the largest collection of ancient Egyptian antiquities in the world. It houses some 120,000 artefacts, with the capacity to display only a representative a number of them. 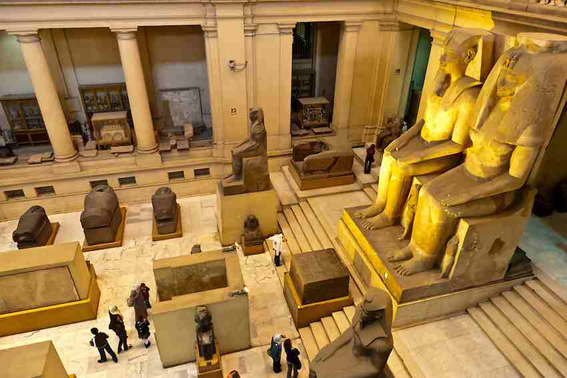 The museum was first built in 1835 near al-Azbakiyah Garden in central Cairo. In 1855 it was moved to the Saladin’s Citadel on Muqattam hill, east of Cairo.

In 1855, the Egyptian government gave Archduke Maximilian ofa Austria many of the artifacts that are now in the Kunsthistorisches Museum in Vienna.

In 1858, following the establishment of Egypt’s Antiquities Service under the direction of French archaeologist Auguste Mariette, a new museum was established in Boulaq, Cairo, on the Nile bank. In 1878, the building suffered significant damage from the Nile River flooding and, in 1892, the collections were moved to a former royal palace in Giza where they remained safe until 1902 when the museum in Tahrir Square was built. The new museum acted as a showcase of a huge collection of Egyptian antiquities, and also as a repository for a much bigger collection that found no room for display in its galleries.

Over time, tens of thousands of objects had to lie in the storerooms and crowd the galleries of the museum, which became so packed to the point that many museologists described the museum as a ‘storehouse’. Hence the need for another, larger, better-equipped museum to house Egypt’s antiquities.

Two new museums are currently being built in Egypt on par with the Tahrir museum: the Grand Egyptian Museum in Giza and the New Museum of Civilisation in Cairo. Whereas the latter will house collections that span Egypt’s long history, the former will be relegated to Egypt’s ancient eras until Greco-Roman times.

GEM, the foundation stone of which was laid by President Hosni Mubarak in 2002, is scheduled to open in 2019. Described as the largest antiquity museum in the world, the museum is built on 72,222 sq.m of land in the shadow of Giza’s iconic pyramids. When completed in 2022, it will have cost roughly a billion dollars: USD300 million granted by Japan, USD147 by Egypt’s government, and USD150 million funded through donations and international organisations. It will have the capacity to house 100,000 artefacts.

The museum was designed by Heneghan Peng Architects, an architecture firm based in Dublin and Berlin. On its website, Heneghan Peng describes the place as:

“The site for the Grand Egyptian Museum is located at the edge of the first desert plateau between the [Giza] pyramids and Cairo. It is defined by a 50m level difference, created as the Nile carves its way through the desert to the Mediterranean.

“The pyramids are on the desert plateau 2km from the museum site, whereas the site for the museum is both in the valley and on the plateau … never extending above the plateau.

“The design of the museum utilises the level difference to construct a new ‘edge’ to the plateau, a surface defined by a veil of translucent stone that transforms from day to night.

“The approach to the museum is a series of layers, whereby the visitor moves through a monumental forecourt, a shaded entrance area and a grand staircase that ascends to plateau level, the level at which the galleries are located and where for the first time the visitor sees the pyramids from within the museum.”

Right there in the foyer of GEM, stands the colossal statue of 3,200-year-old Ramses II welcoming visitors. The statue was transported to GEM from Cairo’s central square named after him in a moving procession on a memorable summer evening in 2006 when the city traffic was supposedly at its lowest. Egyptians lined the route which the great Ramses traversed on his way to his new home, venerating him and cheering him on in an outpouring of spontaneous emotion. Church bells rang and the call to dawn prayer greeted the Pharaoh as he passed
https://en.wataninet.com/culture/museums/ramses-statue-in-final-display-position-in-grand-egyptian-museum/22800/