This year marks the 100th anniversary of the foundation of the Sacré-Coeur school for girls in Heliopolis, Cairo

”Let us respect childhood; let us honour the soul of that small creature of God who knows how to make the best choices, as long as we take the time to awaken her reason and her judgment. I am overwhelmed with love when I think that this is the mission of the Society” (St Madeleine Sophie Barat)
Amid the turmoil of the current political situation and the worries that concern every Egyptian, the centennial celebrations of the Sacré-Coeur of Heliopolis (SCH) gave the 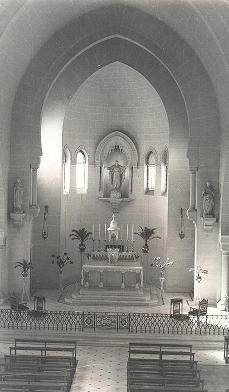 students and the alumni a chance to revive the spirit of their school. On the first day of the celebrations, students presented a play telling the story of the foundation of La Société du Sacré-Coeur de Jésus (SSCJ). The festivities continued with a large festival that included dances and songs presented by students of all ages who recounted in their own way the history of their school. The celebration concluded with the alumni dinner which took place in the school garden and where all generations exchanged memories and stories that took them back to the good old days when they were students in this prestigious establishment.
A film which was projected during the festivities told the tale of a little French girl by the name of Madeleine Sophie Barat. We all know this story by heart, since we have heard it over and over again during the years we spent at our beloved school. This film does not only tell the story of Madeleine Sophie and her congregation, but it also recounts the history of thousands of nuns, students and alumni scattered in the four corners of the world, yet bound together by the spirit of the Sacred Heart.
“For the sake of one child, I would have founded the Society”
Madeleine Sophie Barat was born in France in 1779. Her elder brother, who was a teacher before becoming a priest, was responsible for giving her the best education possible. The French revolution took place during her childhood, establishing the principles of a secular State. As a consequence, it undermined