St Augustine, the 4th-century loose-living philosopher who became a theologian and saint has always been an inspiration for those who needed to make a complete turnaround in their lives. Now an award-winning joint Egyptian Tunisian Algerian film commemorates this sinner-turned-saint.

Augustine Ibn Demoaha (Augustine, The Son of her Tears) won the Best Artistic Achievement award at the 33rd Alexandria Film Festival for Mediterranean countries held last October. The film was also awarded the Audience Prize for Best Film at Wahran Film Festival in Algeria.
Classified as a mega production according to international standards, the film tackles St Augustine’s story along historical and contemporary lines. It was directed by veteran Egyptian director Samir Seif; produced by Abdel-Aziz Malouka and Emad Dabour; and funded by the culture ministries of Egypt, Tunisia and Algeria—the first such joint endeavour. It goes to Dr Seif’s credit that he managed to direct the film with enlightened vision and elegant technique.
Watani had the opportunity to attend the first screening of the film in Egypt. The private screening was at Sayed Darwish Theatre in Alexandria, also known as Alexandria’s Opera House. Attending was Alexandria Governor Muhammad Sultan, officials from the military and tourist sectors, members of the Algerian and Tunisian embassies in Cairo, Christian and Muslim public figures, as well a great number of viewers. 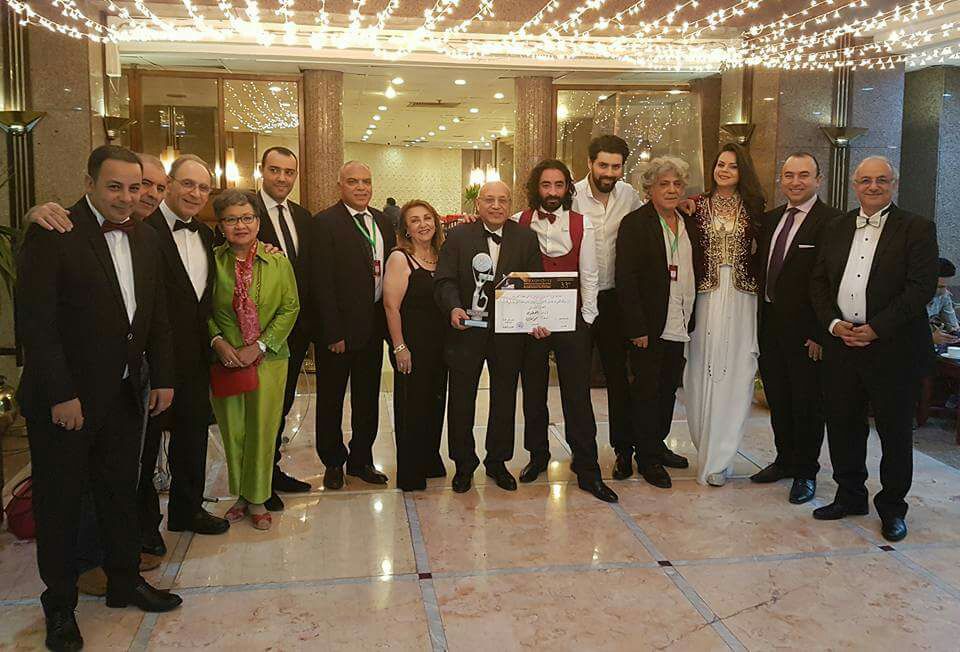 Must-see
The show opened with the Egyptian National Anthem. Governor Sultan greeted the guests and praised the film as an epic historical docudrama that seamlessly interweaves in a modern perspective the cultures of three Mediterranean countries. He said it was obvious that huge, diligent effort had gone into making that film which he described as a must-see.
Youssef Mansour, General Manager at Ibrahimia Media Center and executive consultant for the production of the film, who warmly received the guests, gave the welcome address. The guests were then treated to an orchestral performance of the film’s music soundtrack, conducted by the Algerian Salim Dada.
The film tells the story of St Augustine of Hippo, a 4th – 5th century saint, theologian, and philosopher. He is viewed as among the most significant Church Fathers; his most important works are The City of God and Confessions. After his conversion to Christianity and baptism in 386, he developed his own approach to philosophy and theology, believing that the grace of Christ was indispensable to human freedom. Church scholar and historian Diarmaid MacCulloch writes “his impact on Western Christian thought can hardly be overstated; only his beloved example Paul of Tarsus, has been more influential.” The concept of the Trinity as defined by the Council of Nicaea and the Council of Constantinople is closely identified with St Augustine’s On the Trinity.

“The son of these tears can never be lost”
St Augustine was born in 354 in Thagaste (present-day Souk Ahras) in Algeria in Roman Africa. His mother, Monica, was a devout Christian; his father Patricius was a pagan who converted to Christianity on his deathbed. Scholars generally agree that Augustine and his family were Berbers, an ethnic group indigenous to North Africa.
Though Augustine was one of the most intelligent men who ever lived and had been brought up a Christian, his loose living and worldly ambitions stood between him and the path to faith. A brilliant scholar with an eager intellectual curiosity, his life went through several stages: rebellion, looseness, confusion, and a profound need and search for the truth.
At age 19, he began an affair with a young woman in Carthage who remained his lover for over 15 years and gave birth to his son Adeodatus.
As a scholar, he leaned towards the heresy of Mani, which mixed ideas of Christianity with different philosophies. Yet he never found the peace or truth he so ardently sought.
The tearful, fervent prayers of his mother, Monica, are credited for leading him to a life of holiness and Christian faith. The title of the film refers to the constant tears she shed for her son Augustine, and her full faith in God. When Bishop Ambrose saw her tears, he told her: “Go your way; God bless you. It is not possible that the son of these tears should be lost.”
Augustine made a complete turnaround from his former loose life and spiritual confusion to a life of devout Christianity in which he found his long awaited truth.
He was baptised, became a priest, a bishop, a famous Christian writer, and one of the greatest saints. He died in 430. 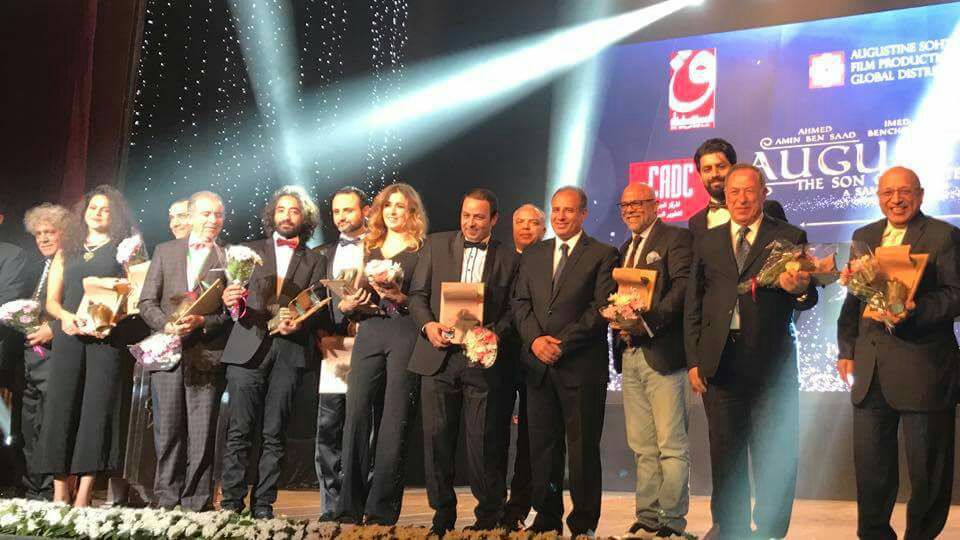 Parallel plots
To charming background music, the film opens with Algerian President Abdelaziz Bouteflika speaking of St Augustine during the consecration ceremony of the newly-restored Basilica of St Augustine in Annaba on the eastern coast of Algeria. The Basilica was built in 1881 and restored in 2013 under official sponsorship of President Bouteflika.
In parallel dramatic lines that shuttle between old and modern times, the film depicts two different plots connected by a common thought. The modern story centres on the life of an Algerian documentary filmmaker assigned to make a film about St Augustine’s life, and the religious and cultural life in Carthage and Numidia at that time. The story of the St Augustine documentary forms the second plot.
The film reveals the wealth of intellectual and political life in Carthage and Numidia, and highlights the significant role of Numidian women, including Augustine’s mother, Monica, played by the young Tunisian actress Aicha Ben Ahmed. Augustine was played by Ahmed Amin Ben Saad.
Augustine is the immoral, confused, brilliant young man who has a mistress and son, but can never find peace till he embraces the Christian faith and is baptised. At the same time, there is the Algerian documentary maker, played by Emad Ben Chini, who is in relation with a bright Tunisian-French young woman with whom he has a son. The contradiction is glaring between the modern, free-willed, self-assertive, vocal, independent woman played by Najlaa Ben Abdullah, and the 4th-century submissive woman, Augustine’s mistress played by Sandra al-Shahawi, who cannot dare voice her sentiments. As the parallel storylines proceed, the documentary maker shares Augustine’s confusion, and is stunned at the moment of illumination that brings him to the truth. He stops, examines his life, and meets his own moment of truth. He decides to marry his lover and mother of his son.

A miracle
Is the film a feature, documentary, or educational or social film? “It is all of these,” Mr Mansour said. “St Augustine is not known to have worked miracles; the making of this film is in itself close to a miracle. This film not only gathered three countries as producers: Egypt, Tunisia and Algeria; but was filmed in four countries: Italy, France, Tunisia and Algeria.”
The film’s events are depicted in their real-life languages: French, English, Italian and Arabic. Everyday expressions in local Arabic dialects are used, giving viewers a realistic feel for the events filmed by director Seif in their original locations: France, Annaba (Algeria), Carthage (Tunisia), Milan and Rome (Italy).
Because of the various languages used, the film was subtitled in Arabic and English.
After the film was screened, Governor Sultan honoured those who worked on the film, including Dr Seif, the actors and actresses and staff who came from Algeria, Tunisia and Egypt. He praised their efforts in documenting the biography of a great philosopher, Augustine, whose thoughts and behaviour were transformed by virtue of his mother Monica’s fervent prayers and tears.

Arduous road to the truth
Watani asked Tunisian actress Aicha Ben Ahmed how she felt about playing the old mother, Monica. Ahmed said she loved the character of St Monica. “In spite of her tenderness and constant tears,” she explained, “she was very strong and persistent in achieving her goal.
“As to playing an old woman, I went home the first day of filming and cried. But then I thoroughly enjoyed playing that character.”
Watani also talked to Mr Ben Saad who said he was proud to have portrayed the saint’s internal conflict, and his mental and moral agony on the arduous road to find God. “St Augustine is a very strong and perplexing character; I felt the reverberation of his struggles in my own psyche.”
Mr Ben Saad and Dr Seif both said they were happy to have worked on a film that highlighted the contribution of Africa and Africans to human culture and spirituality. “One of the goals the film aimed at was to depict Africa as a wellspring of culture and thought,” Dr Seif said. He said the film was linked to human value and thought. “St Augustine used his mind and faith to seek the truth, and became the philosopher and thinker we know of today.” 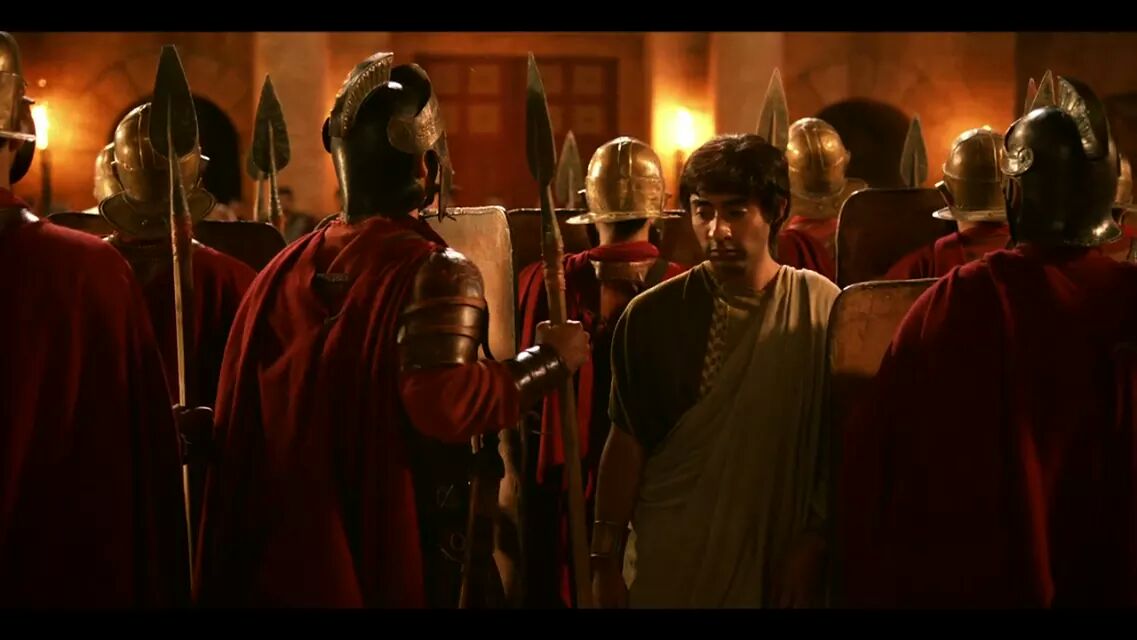 Based on the Confessions
The film was obviously based on St Augustine’s Confessions, but this was never mentioned anywhere. Also missing were more details on his philosophy and on St Monica’s famously strong stances apart from her tears. All this, however, does not undervalue the effort gone into making the film and completing it to be a cinematic gem.
The scenery by Tawfiq Bahi who skillfully chose the locations to reflect the prevalent culture of the day in various places was elemental in the success of the film. The actors played their roles so realistically it was at times difficult to see them as actors.
Salim Dada’s music had an uncanny charm as it flowed dramatically to link place and time, old and modern.
The film included a number of difficult scenes, such as St Ambrose of Milan preaching in long, profound sentences. Dr Seif, however, and Ali Ben Nour (playing St Ambrose) managed to avoid making it boring. There was also the scene of the Roman theatre which involved moving huge crowds; over 500 persons took part.

“Why not now?”
The connection between the two storylines was depicted at its best in the final scenes: the documentary director knocks at the door of his beloved who receives him incredulously as he asks to marry her, just as Monica opens her door to a knocking, repentant Augustine. The film then moves smoothly from Augustine’s baptism to the Algerian director’s wedding; for each the beginning of a joyful new life.
The scene of the repentance of Augustine is by far the most passionate, poignant, and impactful. It was directed with mastery by Samir Seif, and played fervently by Ben Saad in a mix of agony and uncertainty.
“And Thou, O Lord, how long? How long? Is it to be tomorrow and tomorrow? Why not now? Why not this very hour put an end to shame?” The words of repentance marked the beginning of Augustine’s new life. A few years later, he would say: “Our hearts, O Lord, were made for you, and they are restless until they rest in you.” But this was beyond the scope of the film which ended with Augustine’s baptism. 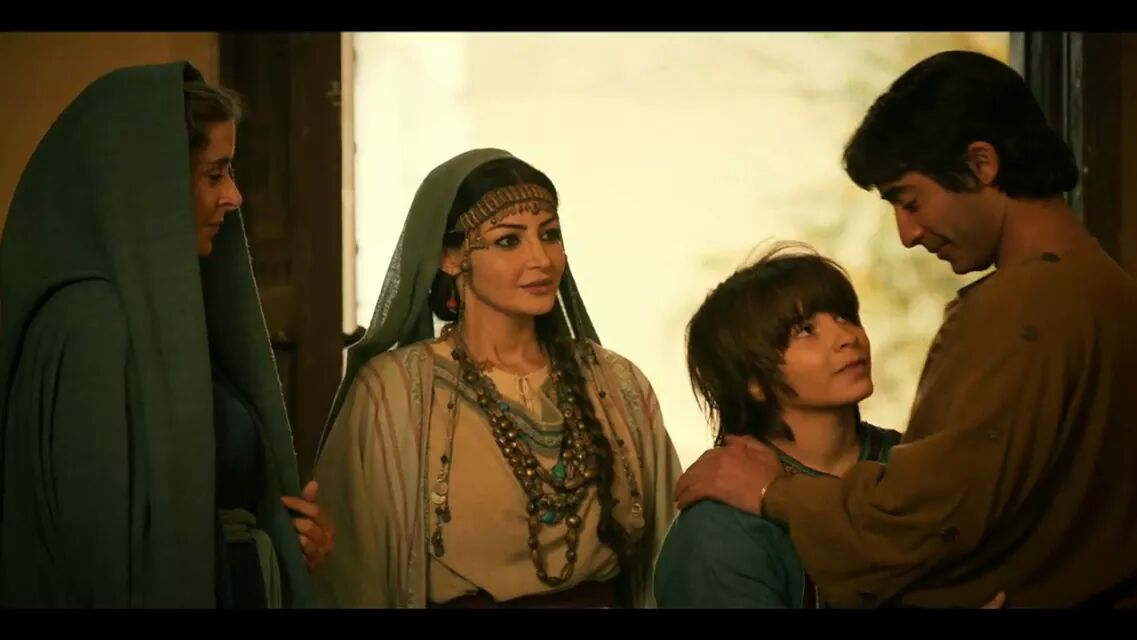