Egypt has received 1,766,400 doses of AstraZeneca’s COVID-19 vaccine, Egypt’s Health Minister Hala Zayed announced. The vaccine shipment arrived at Cairo International Airport late in the evening of 13 August evening, through the COVAX initiative launched by WHO, GAVI international vaccine alliance, and the UNICEF.

According to Health Ministry spokesperson Khaled Megahed, the recent shipment is the third of several shipments totalling 40 million doses to be provided to Egypt under the COVAX initiative. He said more vaccine shipments are expected to arrive successively.

Mr Megahed said the vaccines shipped would be tested at the Egyptian Drug Authority (EDA) laboratories; AstraZaneca vaccine, which is administered in two doses 12 weeks apart, has been given emergency approval by WHO and EDA. It is 76 per cent effective in protecting against symptomatic COVID-19, he said, and 100 per cent effective against severe cases.

According to the WHO, as of 10 August, a total of 5.7 million vaccine doses have been administered in Egypt with 1.8 million fully vaccinated individuals and 3.8 million given the first dose.

Individuals planning to travel outside the country have been given priority vaccination in 126 centres out of 539 centres nationwide. 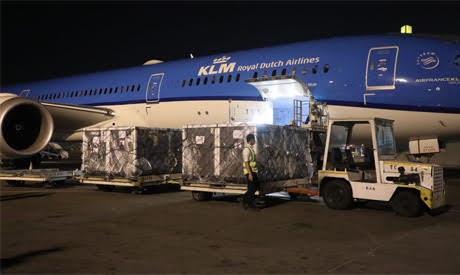