On 10 November 2021, Egypt lost an illustrious painter, Gazbia Sirry who died at the age of 96. Her funeral was held at Mustafa Mahmoud Mosque in Cairo; she was deeply mourned by members of the art and culture domain in Egypt.

Culture Minister Ines Abdel-Dayem mourned Ms Sirry in a statement which read: “Ms Sirry was a prominent figure in the visual arts domain in Egypt and the Arab World. Her creativity was in a class of its own; her works depicted in a singular manner the details of life in our society.” Ms Abdel-Dayem offered her condolences to the family, friends, and fans of Ms Sirry.

Ms Sirry was born in 1925 in Cairo. Even as a child, her talent was obvious. She enrolled in the Institut Supérieur des Beaux-Arts Pour Jeunes Filles (Cairo) from which she graduated with a Diploma in Fine Arts in 1948. In 1949, she got a diploma in Art Education. 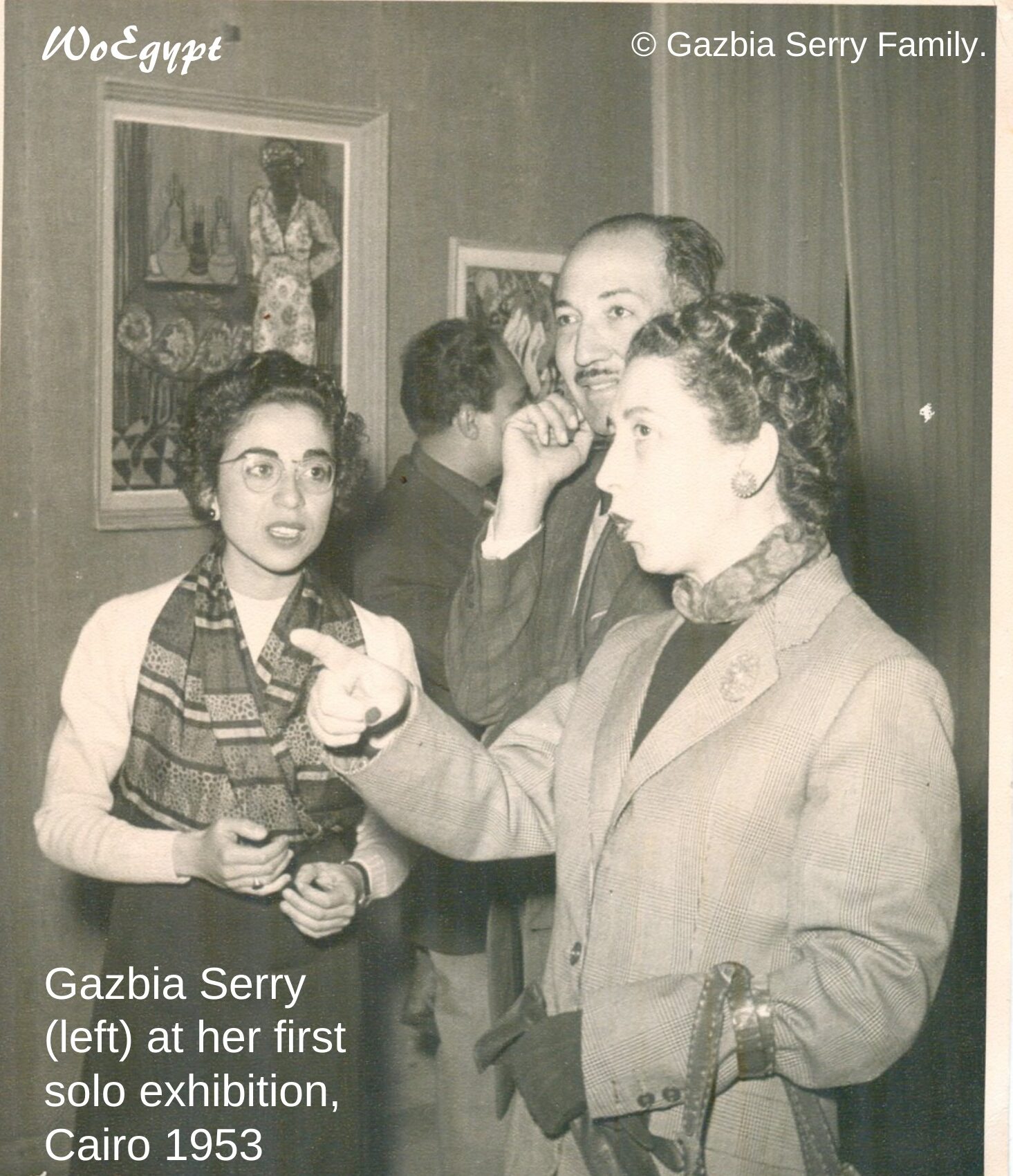 In 1951, Ms Sirry did higher studies in visual art in Paris where she trained at the studio of Marcel Gromaire, following which she went to Rome in 1952 then London where she earned a postgraduate degree from the Slade School of Fine Art in 1955.

Back home in Cairo, Ms Sirry worked as an art teacher at the high school for teachers, and at secondary technical schools. She also taught art at the Private Institute in Manial, Cairo, and the French Institute in Qasr al-Aini, Cairo. In later years, she became a professor of painting at Cairo’s College of Fine Arts, at Helwan University’s Faculty of Art Education where she remained till 1981, and was instructor at the American University in Cairo (AUC) in 1981 and 1982. 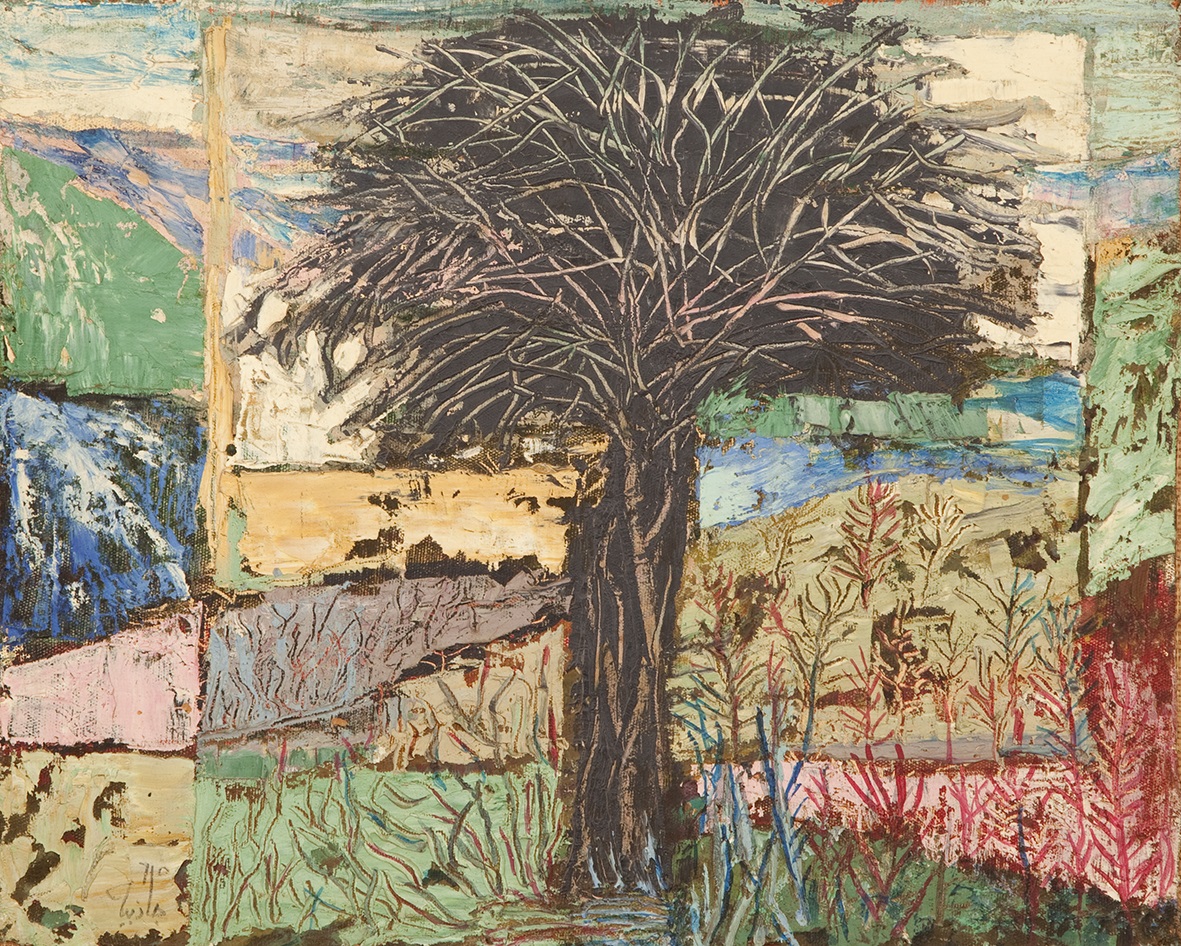 “In 2014, Shems Friedlander, professor of practice in the Department of Journalism and Mass Communication and director of The Photographic Gallery, described Sirry as ‘a senior Egyptian artist who is recognised on an international level. Her value to both the University and Egypt is both as an artist and a historian of Egypt’s culture for over 60 years. She has both joined and led the trends in Egyptian art for several decades’. 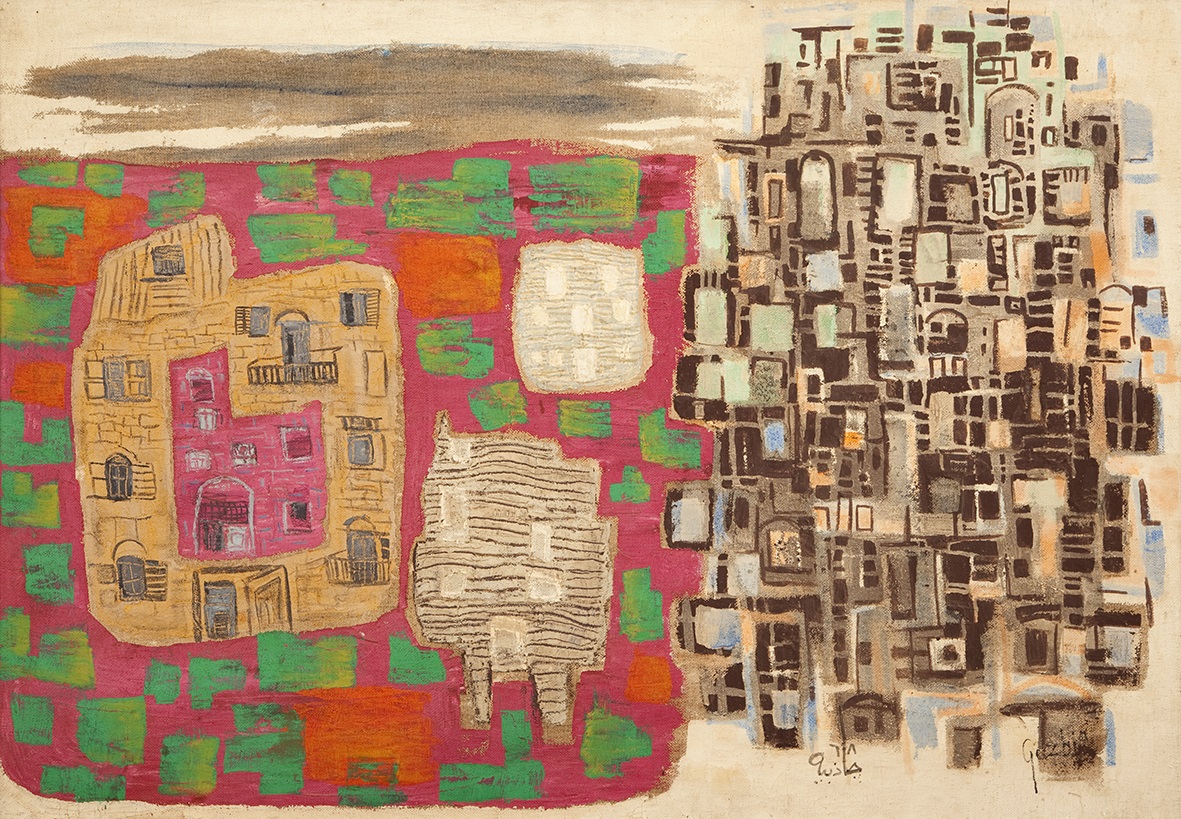 “The AUC Rare Books and Special Collections Library houses a collection of her work. The University also held an exhibition of oil paintings Sirry donated to AUC in 2014, entitled Lust for Colour. ‘The objective of donating the 16 paintings of my work representing the different developments of my art, in addition to my mural of 10 meters x 1.3 meters that was donated to AUC in the mid-1970s and presently displayed in the Jameel Center, is to build a nucleus of an art museum at AUC to serve art students studying the modern art movement in Egypt,’ explained Sirry at the exhibition’s inauguration ceremony.”

With a career that spanned some 60 years, Ms Sirry was among the leading Egyptian artists in modern times. 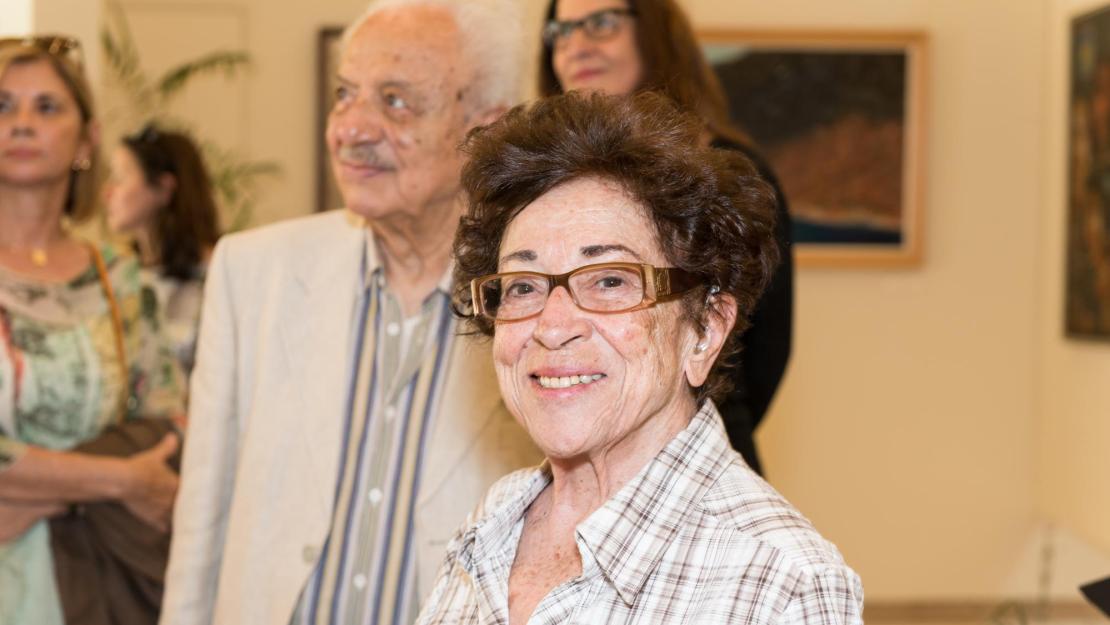 Throughout her career, the artist hosted 70 solo exhibitions for her work in Egypt, the Middle East, Europe and North America. Her award-winning work was displayed in the National Museum for Women in the Arts in Washington, D.C. and the Institut du Monde Arabe in Paris. She was the first Egyptian to exhibit work at the Metropolitan Museum of Art in New York City. At the time, the Met wrote: “Gazbia Sirry is one of the many accomplished women artists who have made a mark in the Egyptian arts throughout the 20th century. She stood out for her dedication to the individual freedom of the Arab woman through her fighting spirit. Sirry’s ardent enthusiasm for innovation and her openness to international influences made her a vital contributor to the Contemporary Art Group in Cairo. A prolific painter, she has experimented with a range of styles. Her early works resembled illustrations inspired by children’s colouring books. But she soon shifted to an Expressionist style in which her use of heavy impasto, quickly applied and violently scratched, explored a thematic revolving around the artist herself or groups of individuals and couples. Her figures seem to be struggling to emerge from the whirlpool of life, or have gathered together for sheer survival in an urban environment gone astray.” 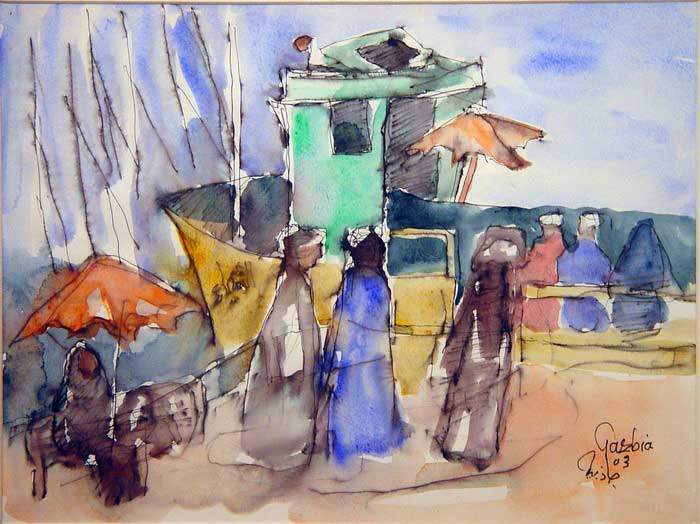 Among the solo and group exhibitions hosted by Ms Sirry have been displays at the Egyptian Museum of Modern Art; Cairo Atelier; Manesterly Museum in Cairo; Salon of Fine Arts; the German Cultural Goethe Institute; Galerie La Palette Bleu, Paris; Gallery of the Arts Centre, Montreal, Canada; Congregational Hall of Modern Art In West Berlin; Gallery of the Egyptian Academy in Rome; as well as many others.

Zamalek Art Gallery in Cairo, which hosted a number of exhibitions of Ms Sirry’s work, mourned her with a post on the gallery’s website. 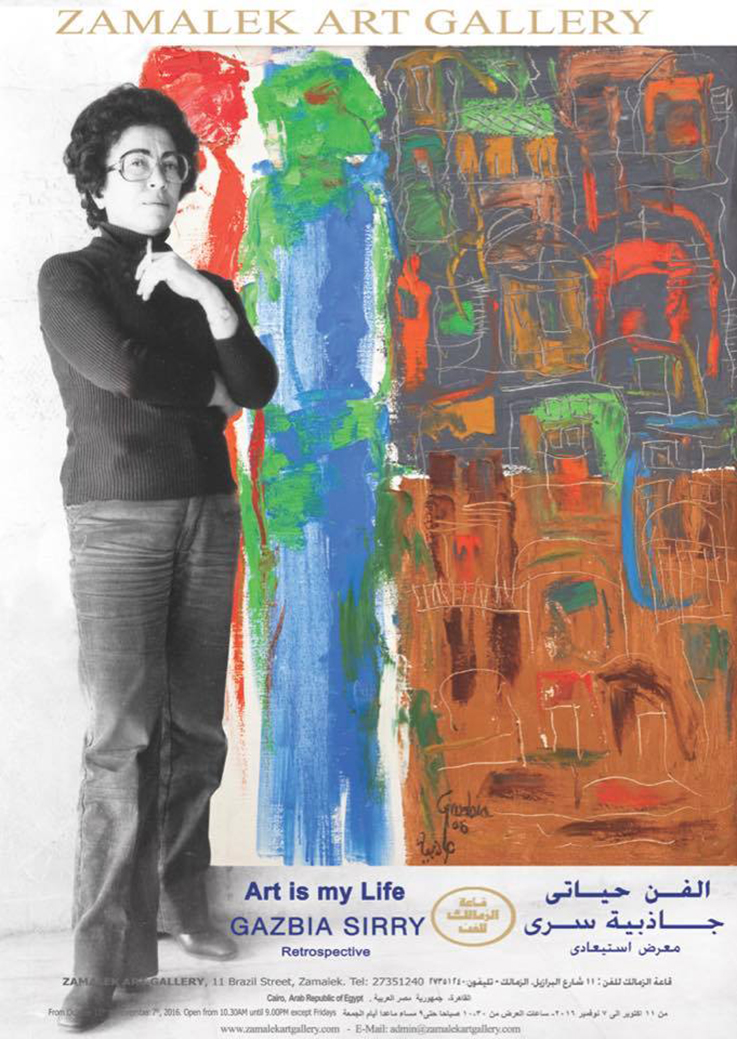 “Gazbia Sirry’s vast body of artwork is rich and diversified, characterised by extraordinary versatility. It would be difficult to confine her to any one particular school, although her vivid and bold brushstrokes share features with neo-expressionism: a school of individuality and personality. With a vibrant curriculum vita, including more than 50 personal exhibitions from Paris to Washington, Venice to Sao Paolo, Kuwait to Tunis, acquisitions by international museums, international prizes, scholarships and prominent university positions, Sirry paints for the sheer love of art, and as her most honest manner of expressing her joys and fears. Describing her art, Mukhtar al-Attar said: “Gazbia does not paint, but rather pours out her soul, talent and intelligence onto the canvas” 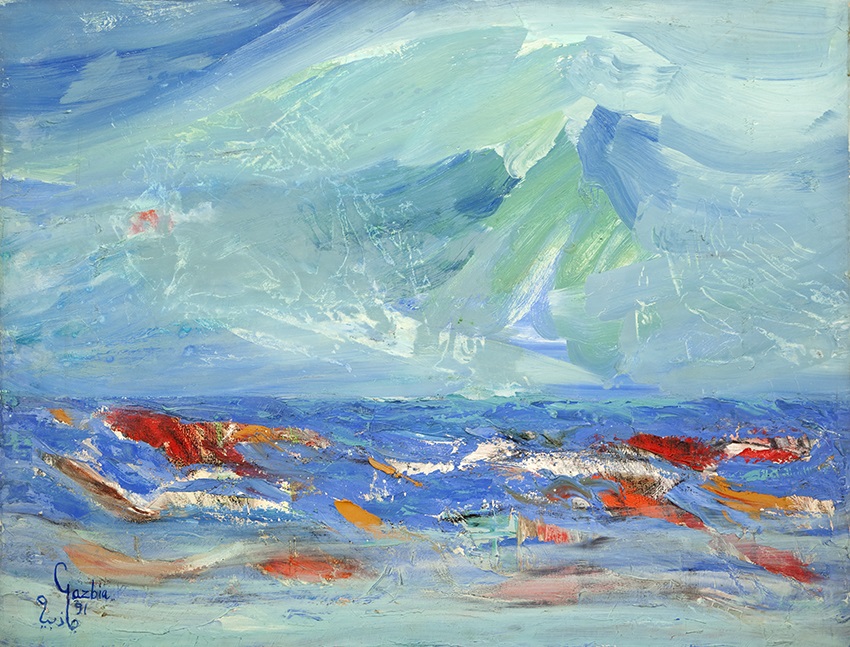 A film was made on Gazbia Sirry and screened by Egyptian TV in 1982; also a documentary on her was produced in 1992 by the Culture Ministry’s National Centre for Documentary Films.

According to Watani’s Wagdy Habashy, an artist and art critic in his own right, Gazbia Sirry’s artworks are rich and diverse, characterised by extraordinary versatility.

In all her creations whether old or modern, Sirry masterfully controls her lines and spaces of thick colour to handle various topics in vivid, bold brushstrokes of gentle violence. She displays a dramatic sense of spontaneous, fearless expression, her colours bathing in the time and space of her vision of the people and the environment that hosts them. Her paintings feature face-like and house-like elements that brim with unanswered questions about life in some form of hopeful anxiety. She was an artist who loved life and saw nature through a fascination with the charm of light and colour. 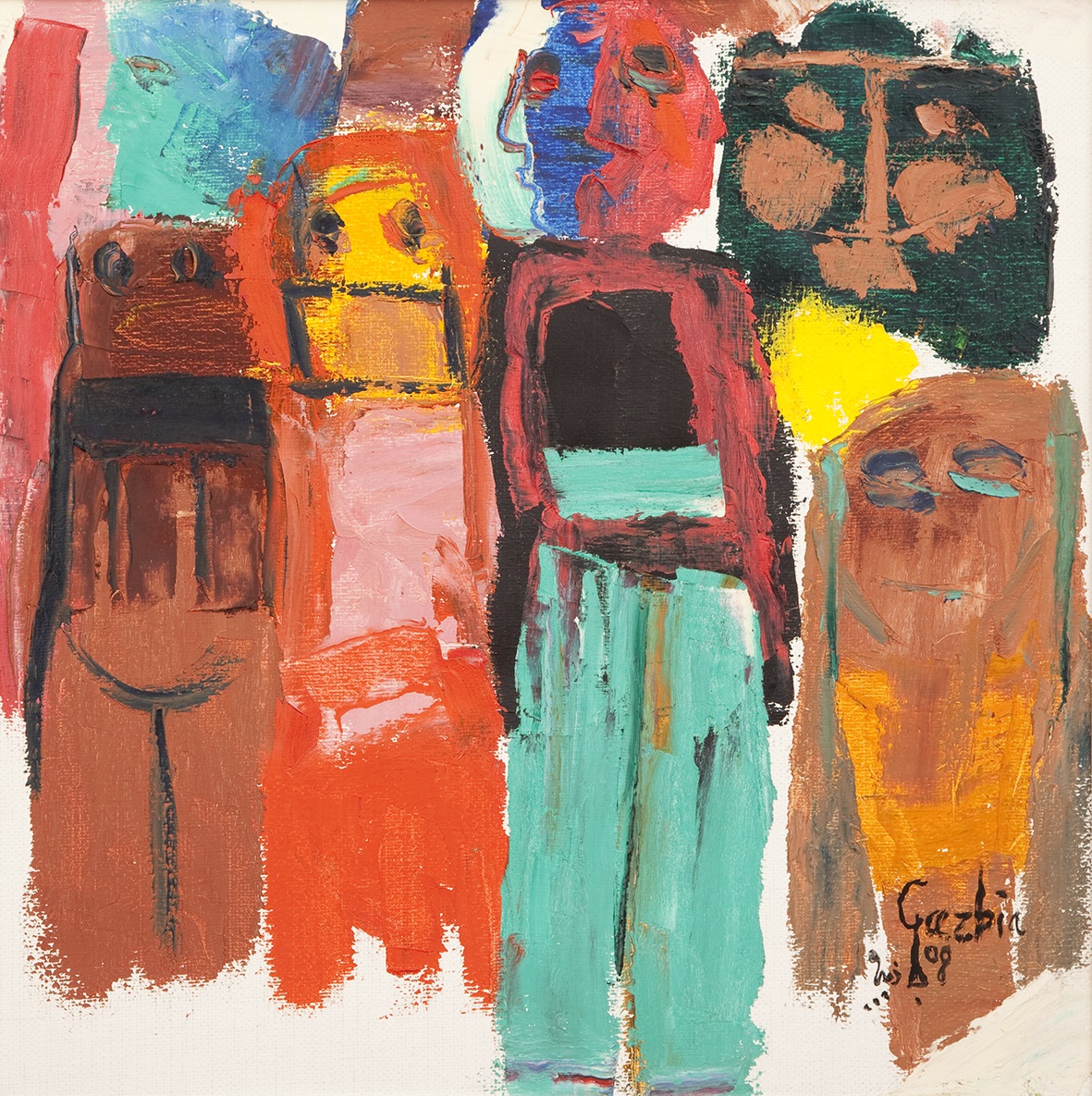 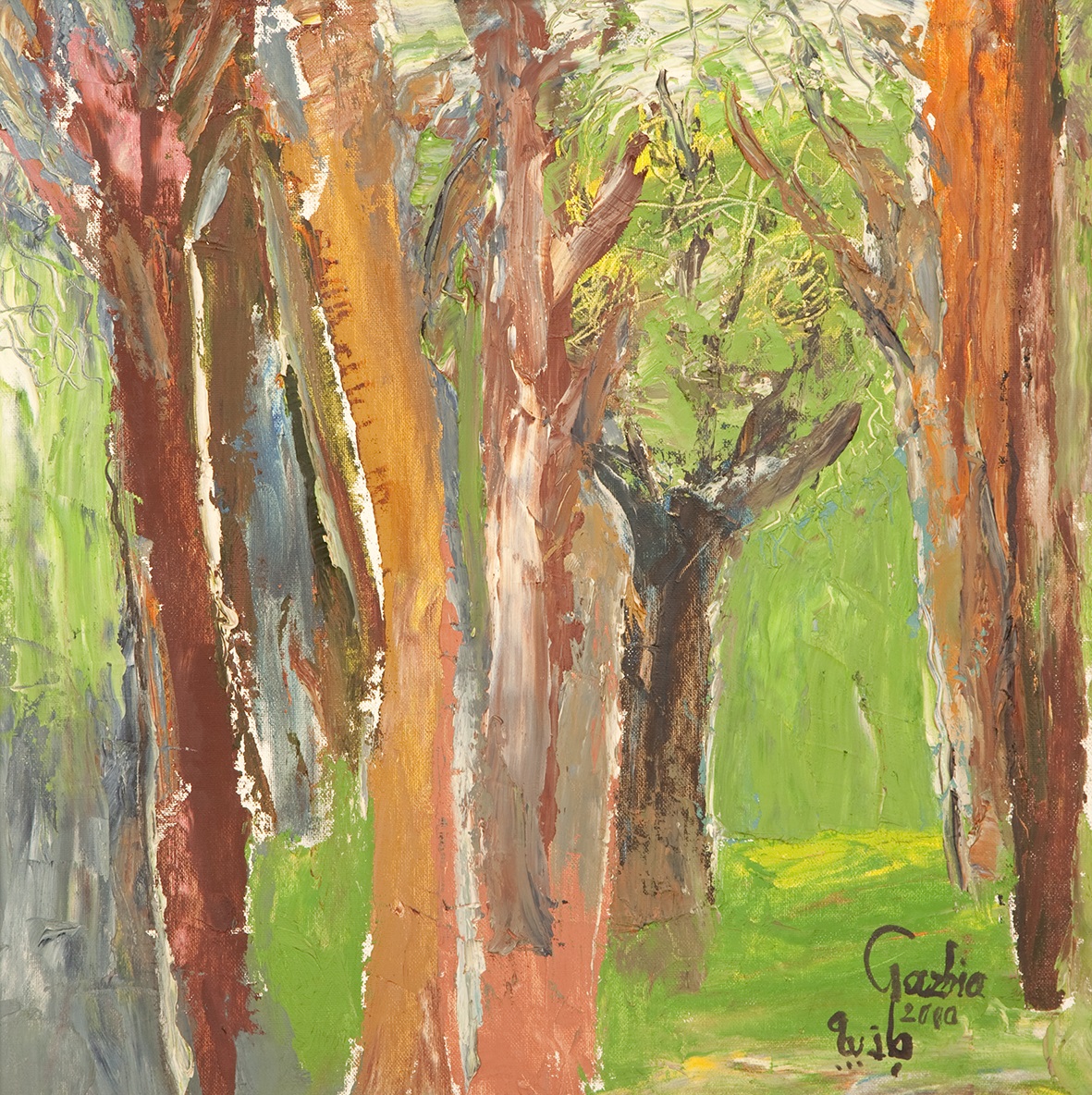 The artist’s work may be described as a mixture of ‘expressionism’ in depiction and ‘abstraction’ in form.

She dearly loved Egypt, creating paintings that conveyed her ardent love and understanding of the people, and the nature of the place. 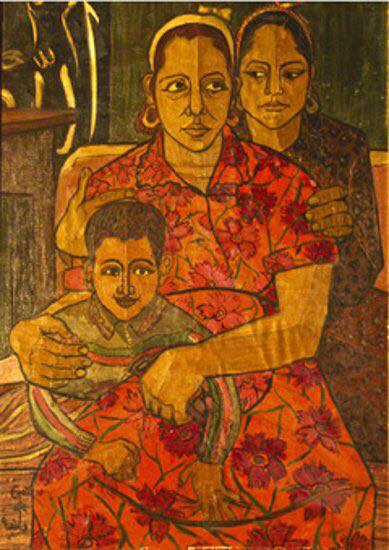 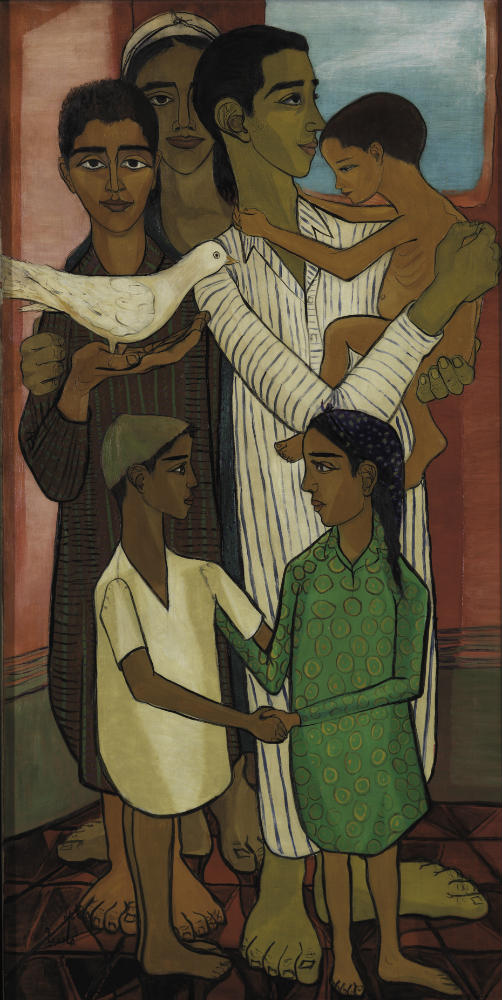 Sirry’s career took her from Cairo to Europe’s artistic centres in Rome, Paris and London. But the heart of her work never strayed from Egypt. “These are paintings about this place, this country,” she once said. 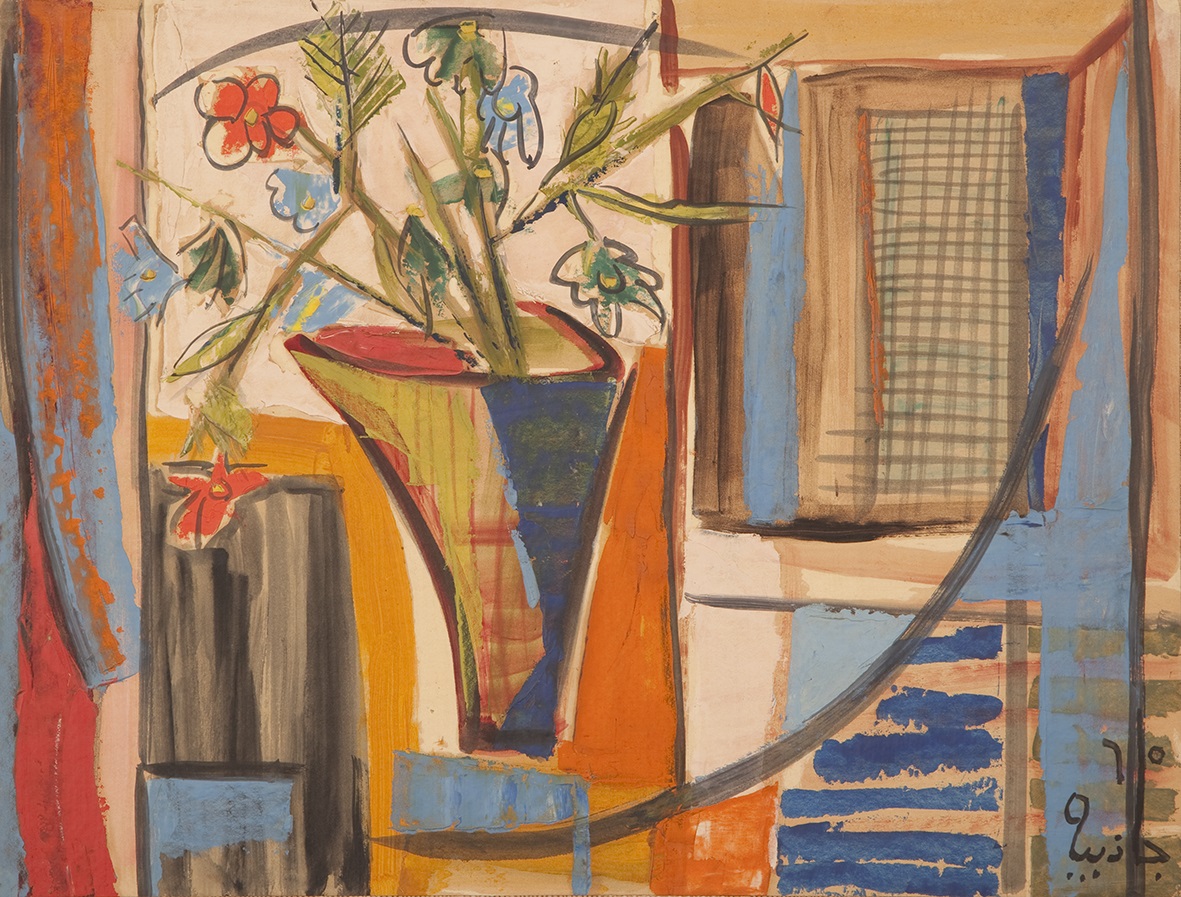 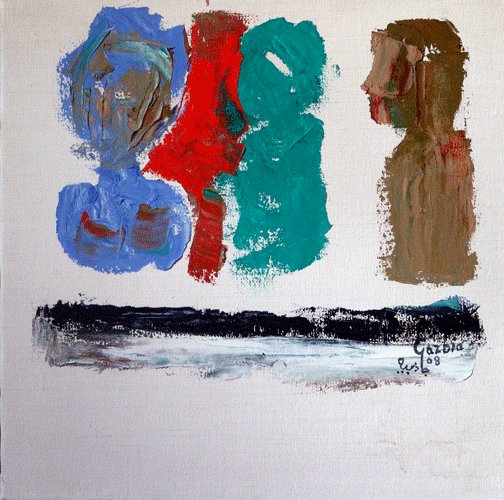 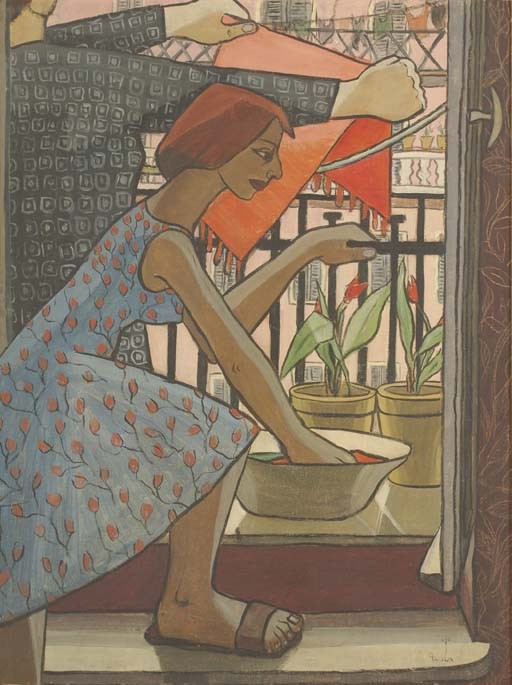 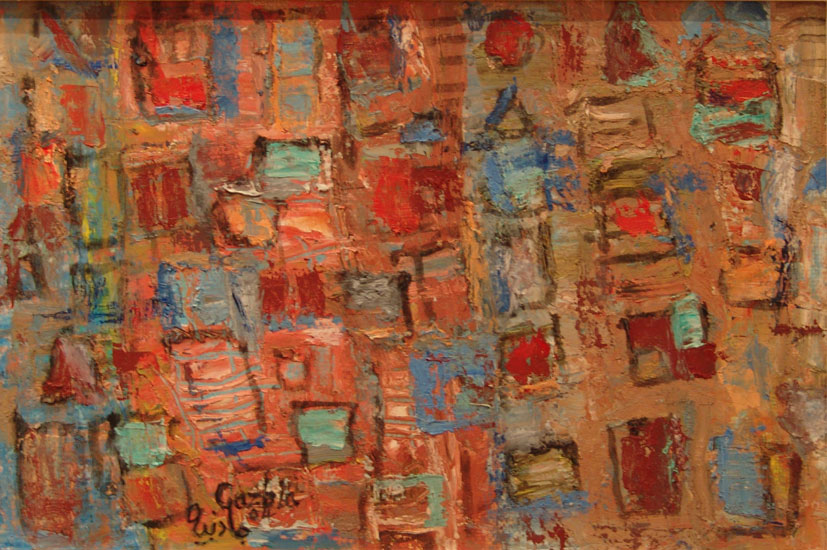 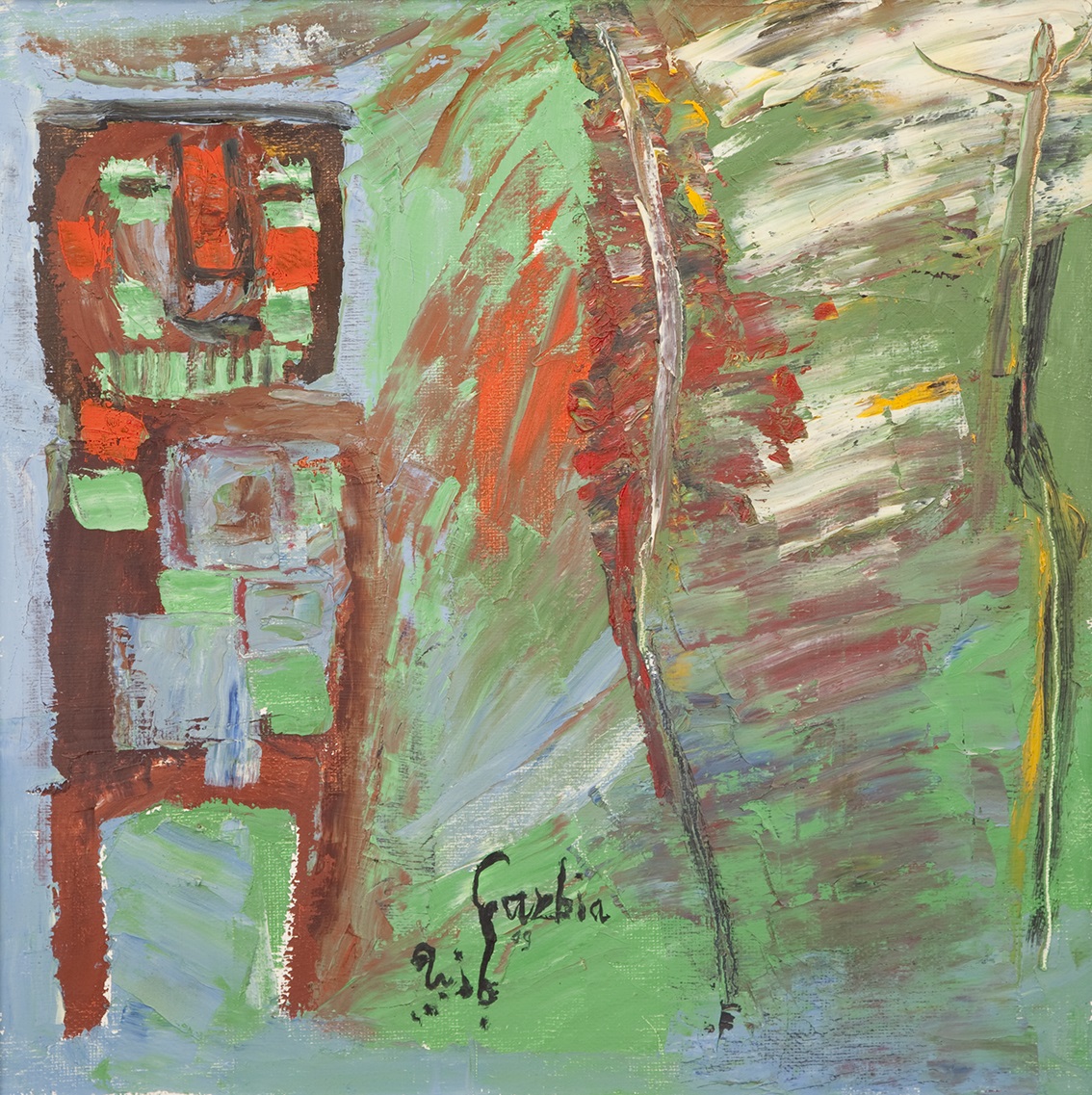 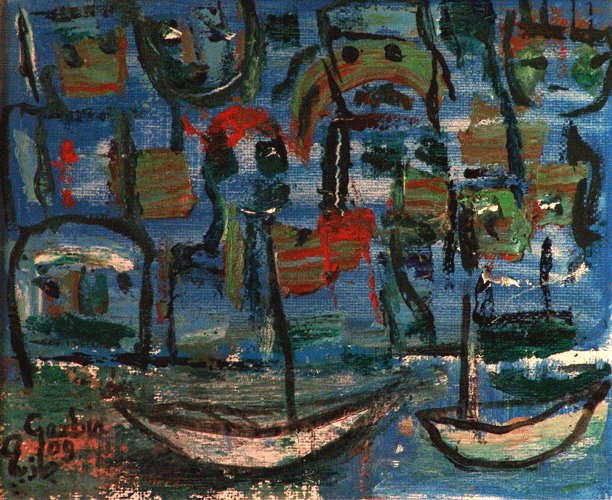