Egypt has lost veteran Egyptian scriptwriter Wahid Hamed (1944 – 2021) who passed away on 2 January 2020 at age 76. Mr Hamed died while in intensive care in a Cairo hospital, owing to health problems which his family declined to define, but which reportedly included heart, lung and liver problems.

Mr Hamed’s son, film director Marwan Hamed, announced his father’s death on his Facebook page. Quoting the Qur’anic verse “We belong to Allah and to Him we shall return”, he wrote: “the great writer Wahid Hamed has passed away.”

Egypt’s Minister of Culture, Ines Abdel-Dayem, mourned the late scriptwriter: “Mr Hamed was a staunch supporter of innovators, intellectuals, actors and actresses. He will go down in Egypt’s history as a man with a golden record of patriotic stances.

“Mr Hamed,” Dr Abdel-Dayem added, “succeeded in creating immortal works that express the dreams of a society and the aspirations of an entire generation. He created down to earth characters that will forever remain in the memory of Egyptian and Arab cinemagoers.” Dr Abdel-Dayem offered sincere condolences to the scriptwriter’s family, friends and all who loved him, praying “May God rest his soul in peace”.

The Anba Rweiss Theatre of St Mark’s Cathedral in Cairo paid tribute to Mr Hamed. “The name ‘Wahid Hamed’ and ‘the great scriptwriter’, directly evoke some of the greatest characters in Egyptian film, characters created by Mr Hamed and embodied by Egypt’s top tier actors and actresses. His renowned 2010 28-episode TV drama “al-Gamaa” [literally The Group, the short name used by Egyptians to denote the Muslim Brotherhood Group], crowned his works as it truthfully documented a significant part of Egypt’s history. His works beautifully drew a true picture of Egyptian events.

“May God rest his soul rest in peace, and grant his family and friends comfort.”

Mr Hamed was born in July 1944 in Bani Korayesh in the region of Sharqiya, east of the Nile Delta. In 1963 he went to university in Cairo, graduating with a degree in Sociology. In the late 1960s, he began writing film and TV drama, but his real success came in 1978 when he started working with the great Egyptian comedian Adel Imam. Together, they formed a successful dueto in a long-term cinematic partnership of films and television works that formed an important part of drama in Egypt and the Arab world.

Mr Hamed lived with and among Egypt’s people. They were the source of inspiration for his films and the characters represented in them. He had the courage to tackle taboo issues, such as marriage between persons of different religions, which he presented in his famous “Awan al-Ward (Season of the roses)”.

The social comedies Mr Hamed was renowned for were heavy with political overtones and context, famous for exposing Islamic terror, a line which underlies many of his films and TV dramas. It appeared to be his mission to look under the veneer of piety Islamists use to give themselves legitimacy and credibility. He wove this notion into his social comedies, and was thus able to bring it closer to public understanding.

Among his works are the films “The Sad Night Bird”, “Stranger in My House”, “The Innocent”, “The Dancer and the Politician”, “The Ghoul”, “The Good-for-Nothing”, “Terror and Kebab”, “al-Irhaby (The Terrorist)”, and “Birds of Darkness” and others. He wrote remarkable TV drama series, among “The Good News”, “The Family”, “Blood and Fire”, “Awan al-Ward (Season of the roses)” and “Al-Gamaa (The Group)”.

Mr Hamed received a number of honours and awards during his career, the most recent being the Golden Pyramid Lifetime Achievement Award with which he was honoured by the Cairo International Film Festival in its 42nd round in December 2020.

For his 40 films and 30 television shows, Mr Hamed won all three of the State’s highest honours: the Nile Prize, the State Appreciation Prize and the State Prize for Excellence in Arts.

Prizes and honours aside, though, Mr Hamed caused an uproar in 2018 when he claimed financial irregularities at the iconic hospital 57357 for children with cancer, a Cairo hospital that offers first-class free-of-charge medical care to children cancer patients. The claim, coming from the great Mr Hamed, warranted an official investigation by the government. No irregularities were found, only two procedural paper violations. The investigation was closed, but the media uproar resulted in the hospital losing donations which are key to its ability to offer free services. 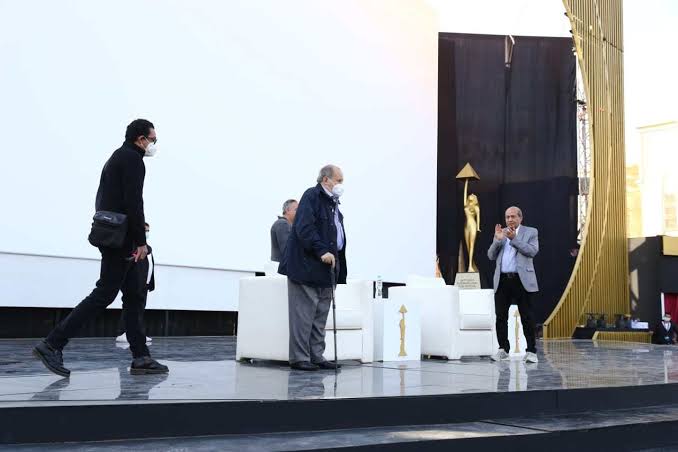