She is the wife of an Egyptian tycoon and the mother of three others. She grew up in a traditional family, comfortable and well protected. At a young age, she took up the traditional family role of a typical Egyptian woman in her standing. Yet Yousriya Loza Sawiris, wife of Onsi Sawiris; and mother of the world renown businessmen tycoons Naguib Sawiris, Samih Sawiris, and Nassef Sawiris is anything but traditional. She grew to be a great woman in her own right, a woman who dedicated all her capacities, energy, and time to champion the cause of Egypt’s poorest of the poor. She geared all means available to her to the development of Egypt’s garbage collector communities, working and recruiting others to work to lift these communities out of squalid destitution to decent, sustainable living.

I had long desired to interview Ms Loza Sawiris, fondly known as Yousriya by the general public. So I was overjoyed when the opportunity for this interview finally came up. I found her to be a bright woman, witty and full of life, with a momentous sense of humour and an infectious laugh. Her kind heartedness was all enveloping, and her extreme humbleness deeply moving. We had a heart-to-heart talk which I here share with Watani readers.

Beginnings are always a good point to start. Would you kindly tell us about yours?

I was born on 31 December 1935 in Manfalout, a city north of Assiut, some 350km south of Cairo. My father was a lawyer and had an office close to our home. In 1953, when I was 17, I married Onsy Sawiris. I had not completed my secondary school education, but I later managed to work for and receive a GCE certificate through the British Council in Cairo. I then enrolled in Cairo University’s Faculty of Commerce from which I graduated in 1969. In 1982, I earned a Masters degree in business administration from the American University in Cairo. And for 11 further years, I took courses at Harvard Kennedy School and Harvard Business School.

What are the most remarkable phases in your public life?

I thank God that I was fortunate in several domains. I completed my studies after I got married, up to a Master degree in business administration. For ten years, I worked as finance manager at Ford Foundation in Cairo, and managed to take a number of courses with Harvard Business School and Harvard Kennedy School.

In 1984, I established the Association for the Protection of the Environment (APE), which worked to raise the standard of life of the garbage collectors, focusing on areas such as health care, education, raising incomes, and tackling issues of concern to women and children. APE’s work was repeatedly recognised by the international community, among which was the 1998 Dubai International Award For Best Practices to Improve the Living Environment, awarded by UN-Habitat and Dubai Municipality; it was also chosen among the top 100 associations in the world. Today I am on the board of the association, working within a large team of dedicated board members, volunteer workers, and expert workers to better the quality of life of the garbage collectors.

We were able to raise the garbage collectors district in Tora, south of Cairo, from a decrepit area into a modern urban town whose dwellers are proud of, where health and environmental awareness runs high despite it still being a residential place for people whose activity centres on garbage.

I founded the Sawiris Foundation for Social Development (SFSD) in 2001, and act as chairwoman of its board of trustees. I also established in 2008 the Enhancement of Integrated Services and Waste Recycling Company, the objective of which was to create job opportunities for garbage collectors, and to achieve my dream of a clean Cairo.

You were member of the Egyptian parliament, right?

I was named an MP for the round of 1995 – 2000, during which I was member in the parliamentary committee for health, environment and local management. Among my important goals was to enhance the communities of the garbage collectors, and to ameliorate the economic, health, and educational conditions troubling these communities. I worked on tackling the priority issues of poverty, unemployment, and deficient health and educational services.

Will you please tell us more about the prize you received this year 2020 for efforts in social development?

As chairwoman of the Board of Trustees of the SFSD, I received the Arab Woman Award for Social Responsibility. But I wish to say that the members of the board and the executive manager, also all the other workers in the foundation are the ones who really deserve the award on account of all the work they do with exemplary dedication.

Since it was established in 2001, the SFSD has acted as one of the first national donor foundations in Egypt. It has prioritised rooting the concept of sustainable development in place of charity work, through sponsoring innovative ideas and turning them into projects that secure a good life for the needy and the marginalised.

Over 20 years, the SFSD has supported economic, social, and educational initiatives that were effective in the lives of more than 300,000 Egyptians in Egypt’s various governorates, especially those in the south. More than 85 per cent of the foundation’s programmes and projects have gone to Upper Egypt.

Together with local and international partners who belong to the public and private sectors as well as to civil society, SFSD has succeeded in funding and delivering programmes aimed at achieving comprehensive and sustainable development. This resulted in the creation of thousands of job opportunities, availing quality education to the needy at all scholastic levels, and scholarships to thousands of students, also supporting technical education and vocational training. The total budget allocated by the foundation since its inception amounts to some EGP960 million.

Currently, what is your top priority where your work is concerned?

I am preoccupied with applying solid waste management and waste-recycling everywhere in Egypt. I dream of cleaner streets absolutely free of garbage.

It is remarkable that with all your immense public work, you always found the time to do more studies. How was that?

I was and still am passionate about learning. It is of utmost importance to educate oneself on the domains one is engaged in and how to best achieve success in them. This applies to everything I studied. A list of the courses I took demonstrates this very clearly.

What message would you like to convey to women in Egypt?

I would like to tell Egypt’s women to pay special attention to the environment, especially regarding the waste or garbage issue. Sorting household waste is a highly significant step towards a cleaner environment. Every woman should sort her garbage to separate the organic waste from all other waste before handing it over to the garbage collector. No waste should be thrown on the street. If we manage that, we will achieve a cleaner environment.

How do you see women’s role in society?

Women are the backbone of society. They are the mothers who bring up new generations, and the partners to men in shouldering life’s responsibilities and burdens. It is of utmost importance therefore to ensure women get at least proper basic education.

You have three wonderfully successful sons, each in his respective domain. How did you manage that?

As a mother, I taught my sons the love and fear of God, the love of all creatures, and honesty and faithfulness in everything they did. I taught them persistence, endurance, and the value of hard work. It is by God’s grace that all three of them: Naguib, Samih, and Nassef Sawiris are successful and fruitful. 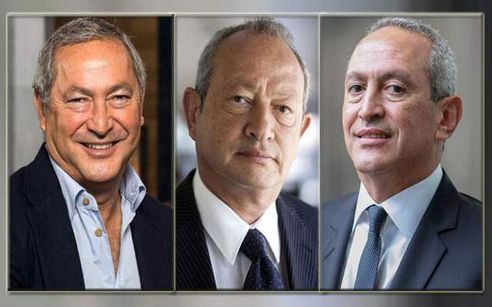 The Egyptian popular saying goes: “Dearer than our children are the children of our children”. Do you believe in that?

I have 13 grandchildren aged from 12 to 30. They are the joy of my heart. The wedding of my eldest granddaughter last year warmed my heart with happiness.

The most important awards and honours you received?

In all my work, I never sought prizes or awards. I fear the earthly awards would subtract from my biggest reward in Heaven. Much more important to me is my place in Eternity.