The National Council for Childhood and Motherhood (NCCM) has announced it had succeeded in aborting a marriage between two children from the village of al-Manshaa in Sohag, some 500km south of Cairo, right before their wedding.

Sahar al-Sonbaty, Secretary-General of NCCM, told the media that the NCCM’s Child Helpline, 16000, received a call that informed that a man from the village of al-Manshaa intended to marry off his 15-year-old daughter to a 17-year-old groom on that same day. Ms Sonbaty said the NCCM got in immediate touch with its protection committee in Sohag to investigate the matter, together with their local partner NGO. Once the veracity of the information was proved, the NCCM filed an official complaint with the public prosecutor in Sohag, which in turn gave orders to directly to stop the marriage. The bride was found to be at the hairdresser, and the young groom heading there to accompany her to their wedding. They were both taken, together with their parents to the prosecution office where they signed a pledge that the children would not marry before the legal age of 18.

Investigations revealed that the boy had been married before to another child bride who he turned way from their home even though she had given birth to a little boy. The groom never applied for a birth certificate for the baby. Ms Sonbaty said the NCCM would see to it that such a certificate is issued, and would offer support to the young mother and child. She added that the NCCM would follow up regularly on the case.

According to Ms Sonbaty, child marriage is detrimental to girls’ physical and psychological health and moreover cuts short their schooling, thereby depriving them of basic and constitutional rights. 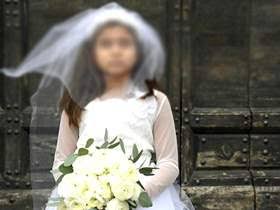