Given that Watani International is this year marking 20 years in print—our first issue was printed on 18 February 2001—we have promised our readers to publish every month a review of our issues during that time, year by year. We already reviewed the issues from 2001 to 2011; today we keep good on our promise by covering 2012. That was the year that followed what came to be termed the “Arab Spring” and saw its consequences materialise.

For non-Islamist Egyptians—“non-Islamist” here denotes moderate Muslim as well as Christian Egyptians—the year 2012 took off on an ominous note and ended on an even more ominous one.

The Arab Spring of January 2011 had resulted in Egypt’s President Hosny Mubarak stepping down in February 2011, and the country was handed over to the Supreme Council of the Armed Forces (SCAF) until a new president would be elected. But Egypt’s Islamist Muslim Brothers (MB), who had been instrumental in the Arab Spring uprising, rode the wave of the ensuing turmoil and unrest to gain the sympathy of Egypt’s mostly pious Muslims, and thus secure a foothold on the Egyptian political scene. Through their Freedom and Justice Party (FJP), and in collaboration with the Salafi al-Nour party, they achieved a huge win in Egypt’s parliamentary elections at yearend 2011, winning 66 per cent of the seats.

So Egypt embarked on 2012 with the Islamists all set to take over the country, and the moderates vowing to never let that happen.

It did not help that the country had fallen into lawlessness; a wave of unprecedented crime swamped Egypt. Neither did it help that there was a general call for the military to hand over the country to civilian rule. The Islamists felt certain they would clinch power if that happened, whereas the disaffected seculars were distressed that “this [military rule] was not what we called for through our Arab Spring uprising.” But then, neither had they imagined it would lead to Islamist rule.

The contradictory vision of both sides on the Egyptian political field: the notorious Islamist belligerence in enforcing fundamentalist Islamic teachings on the people, and the indefatigable determination of the non-Islamists to fight back, led to an unprecedented escalation in Islamisation and in attacks against Copts. Seculars fought back with protests and harsh criticism of the Islamic fundamentalist practices. 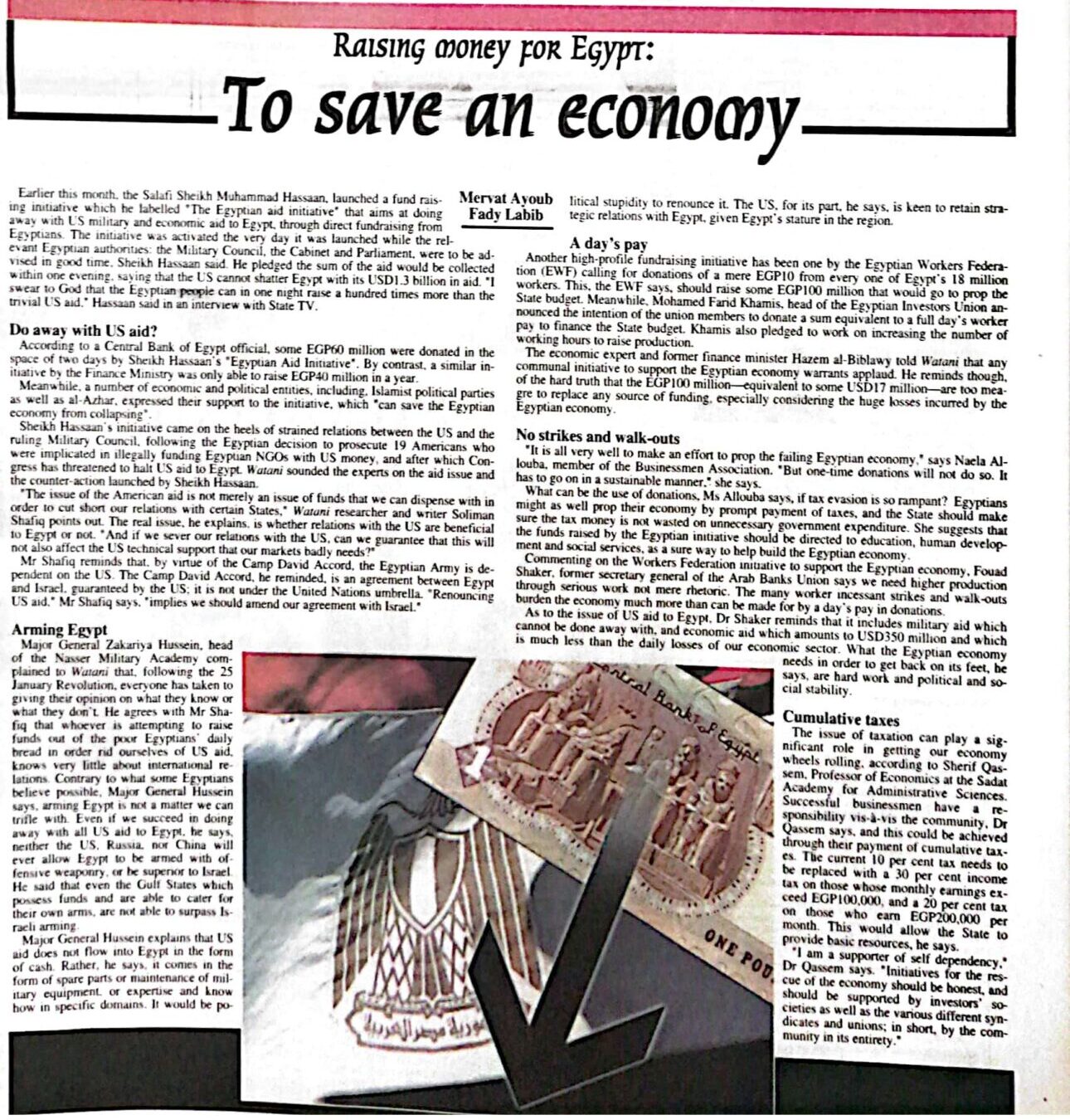 The Salafis launched their Wahabi-style Commission to Enforce Virtue and Combat Vice. It horrified Egyptians because it went against many of their deep seated social norms, the Salafis called them “stinking concepts of liberalism” even though they went way back in history before liberal movements were born. Islamist attempts at gender segregation, closing barber shops that shaved beards, demanding that shops close at times of the five daily Muslim prayers, imposing an Islamic dress code, and suchlike infuriated Egyptians. 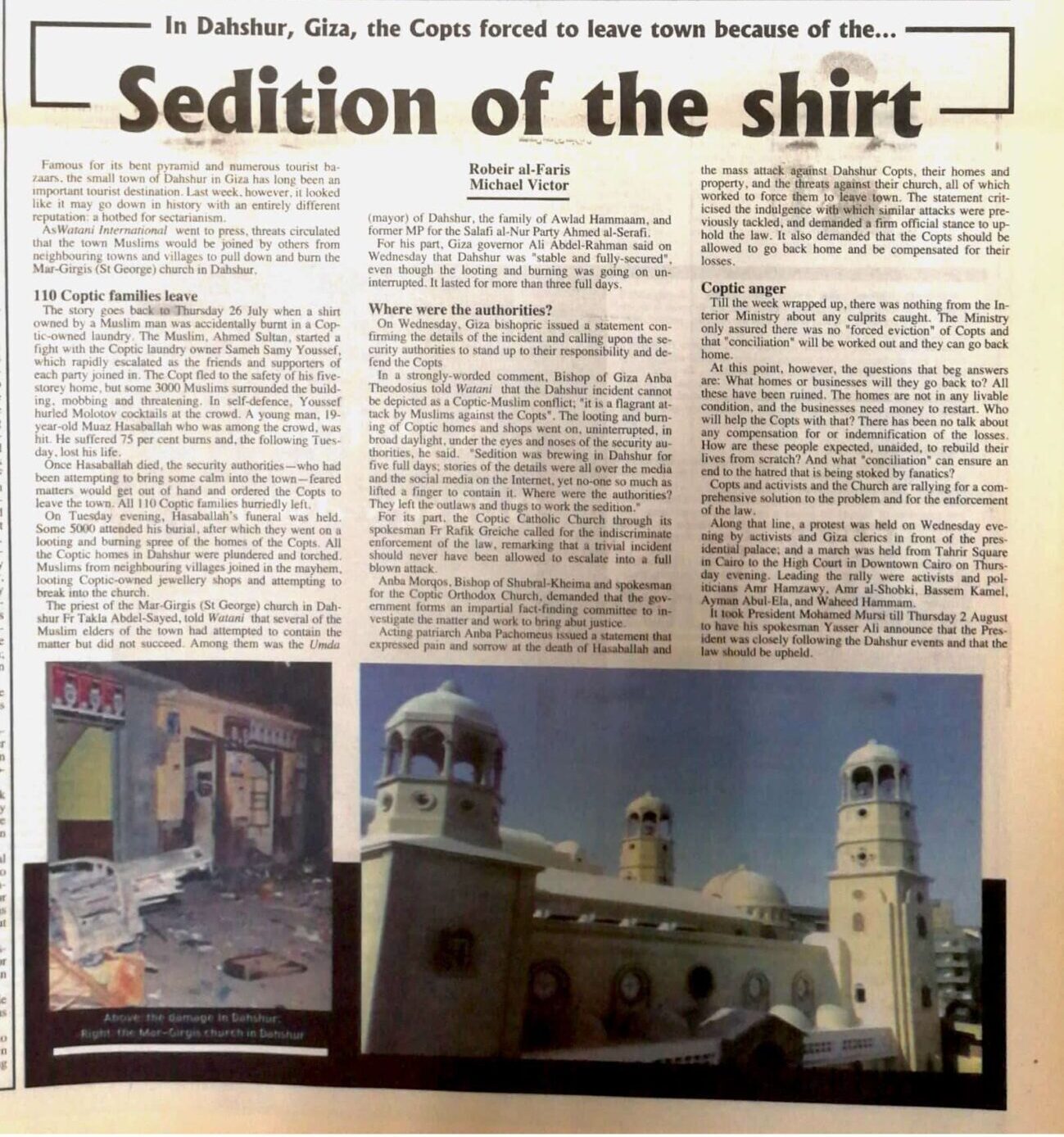 In villages in Manqabad, Assiut; Sharbat, Amriya; Abul-Matamir, Beheira; Fahshour, Beni Sweif, Rafah, Sinai; Copts were attacked, there houses burned, and large numbers of them evicted out of their home villages in incidents that epitomised hate practices. 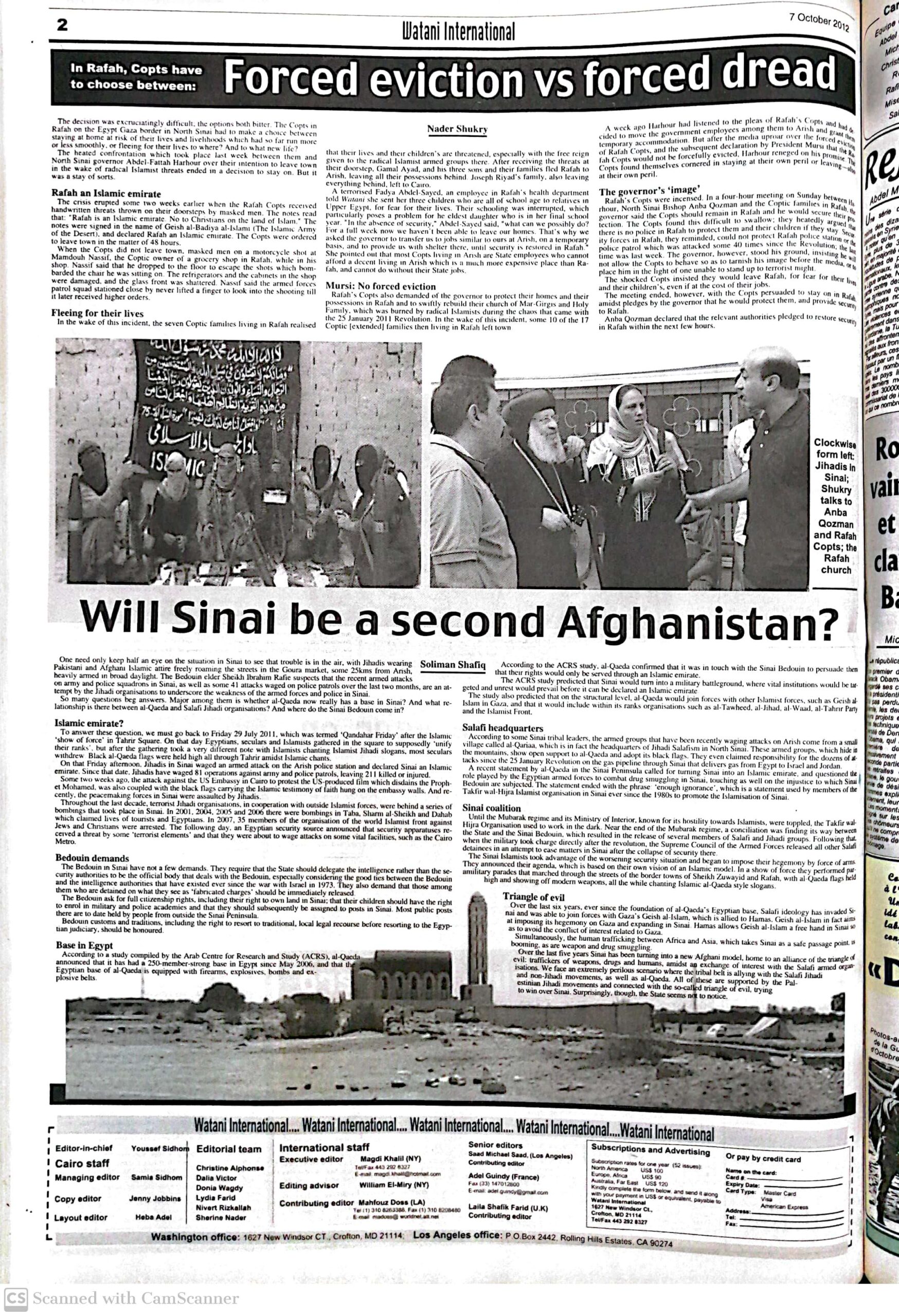 The pretexts were wildly exaggerated claims that ranged from the ridiculous story of a Muslim man’s shirt scorched in a Coptic man’s laundry shop, to allegations of insulting the Prophet Muhammad, discovery of an illicit affair between some Coptic man and Muslim woman, or Copts praying in unlicensed de-facto churches. The Copts were humiliated and forced to acquiesce to unjust out-of-court “conciliation” with their attackers, relinquishing in the process their legal rights. Never was a culprit caught or the law enforced.

No matter how hard the situation was becoming for Egyptians in general and Copts in specific, it was minor compared to what was taking place on the political front. That, in brief, was nothing short of an Islamist attempt to wipe out Egypt’s identity and replace it with an Islamic one. 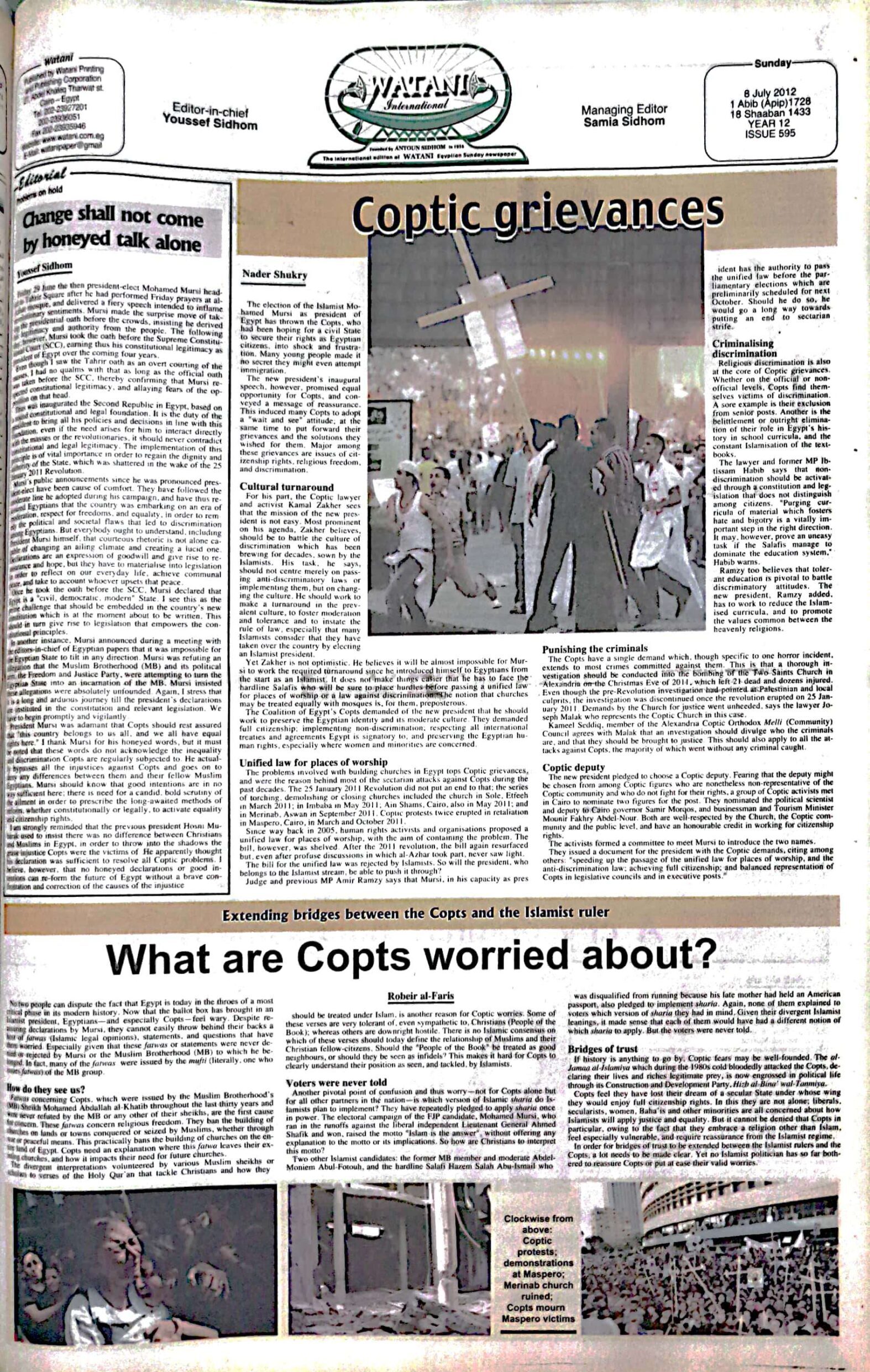 Egypt’s Islamist-majority Parliament started off assigning its parliamentary education committee to a Salafi to head, Shaaban Abdel-Alim who told Watani that education policies should conform with Islamic sharia. This meant that school curricula should be changed to an Islamist perspective, and brought about talk of banning girls from regular education and confining them to schools that taught what Islam saw as necessary skills for girls. Egyptians were rightly horrified; the Egyptian mind was being targeted. But liberal educators such as Mohamed Diab said that “the moderate, tolerant Egyptian mind is strong and will never be perverted”. 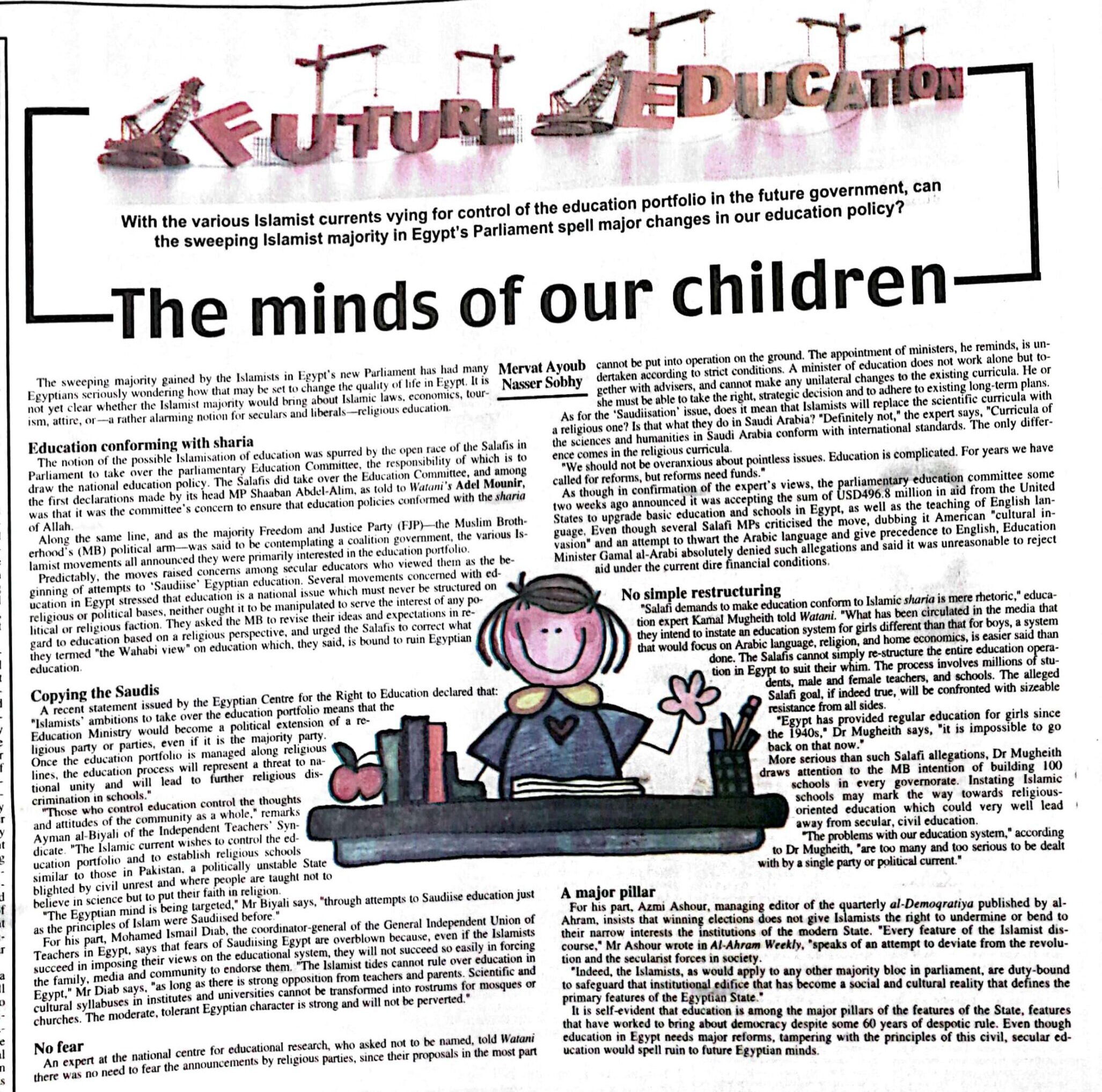 The first task assigned to Egypt’s new Parliament  was to draft a new Constitution for Egypt, following which presidential elections would be held. A 100-member Constituent Assembly (CA) was picked by Parliament in late March; not surprisingly, 60 of its members were Islamists, six were Copts but one of them was Rafik Samuel Habib who belonged to the MB, the others were public figures. This, Copts and secularists saw, did not bode well. The CA was later expanded to a 150-member body and included representatives of Egypt’s major Churches. 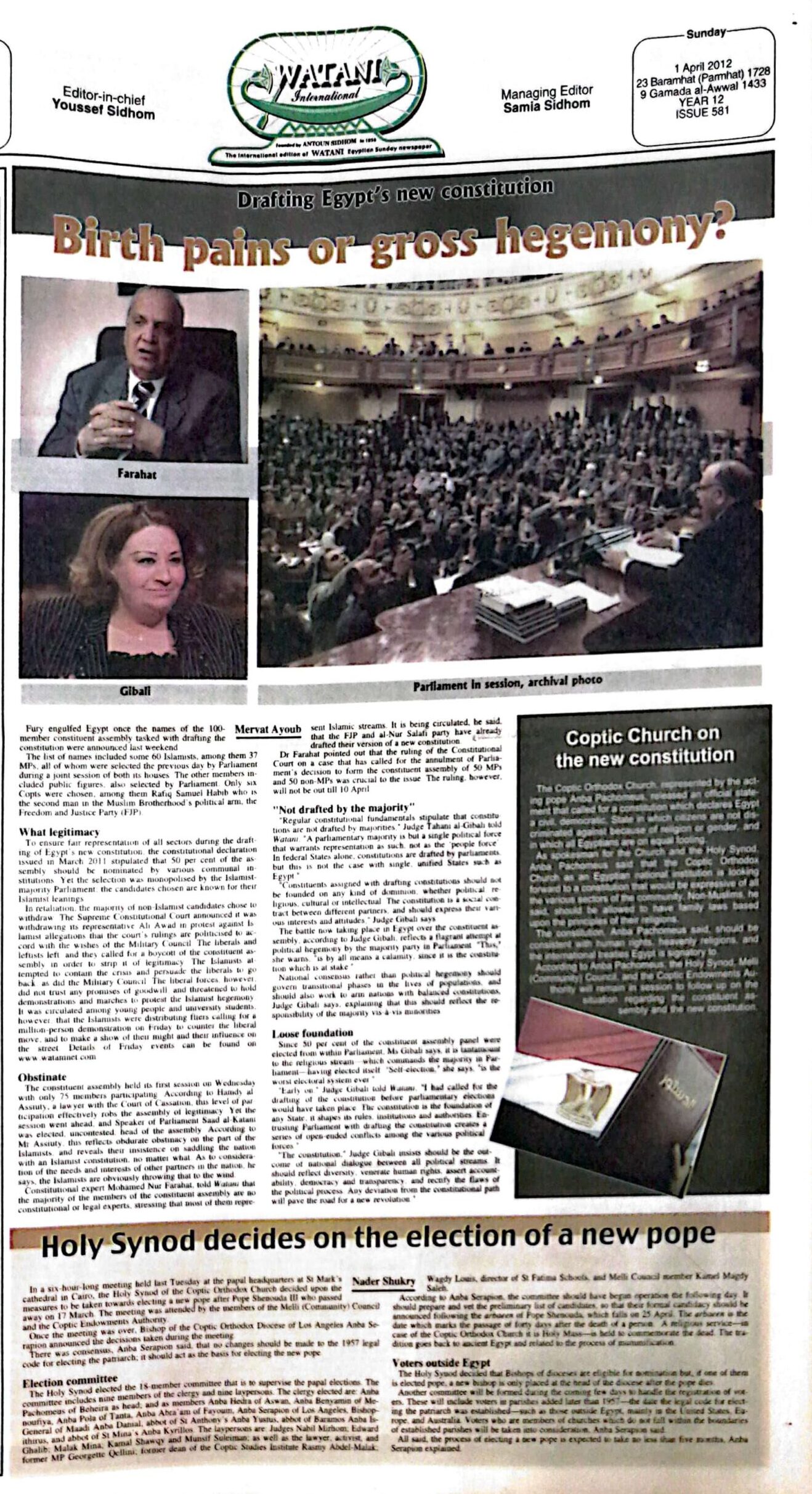 Also late March, candidates for the presidency emerged, and it was clear the race would coalesce into one between Islamists and seculars. 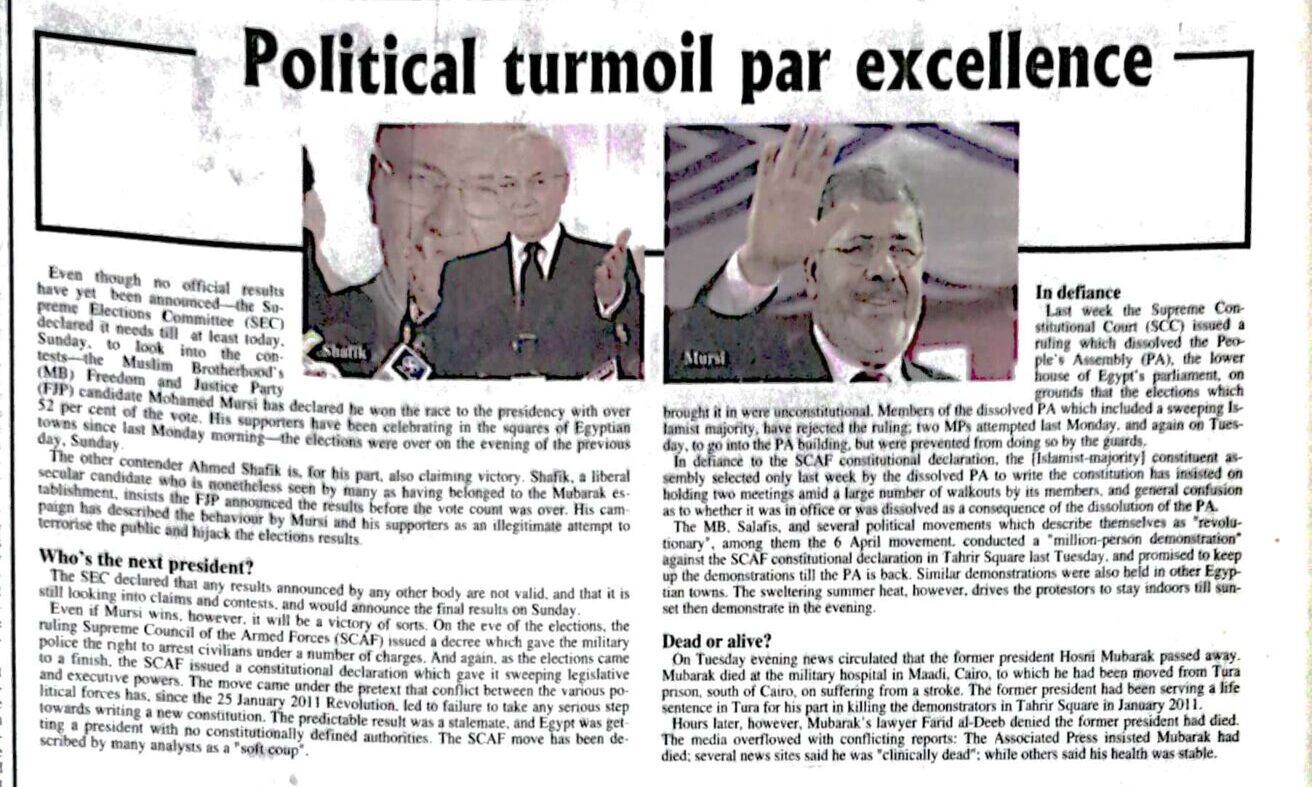 In May 2012, Egyptians headed to the polls to elect a president, even though there was as yet no Constitution to define his powers; divisions among the divergent views of the constituent assembly members had made agreement impossible. The secular candidate Ahmad Shafiq, Mubarak’s last Prime Minister, lost to MB candidate Muhammad Mursi who won 52 per cent of the vote. 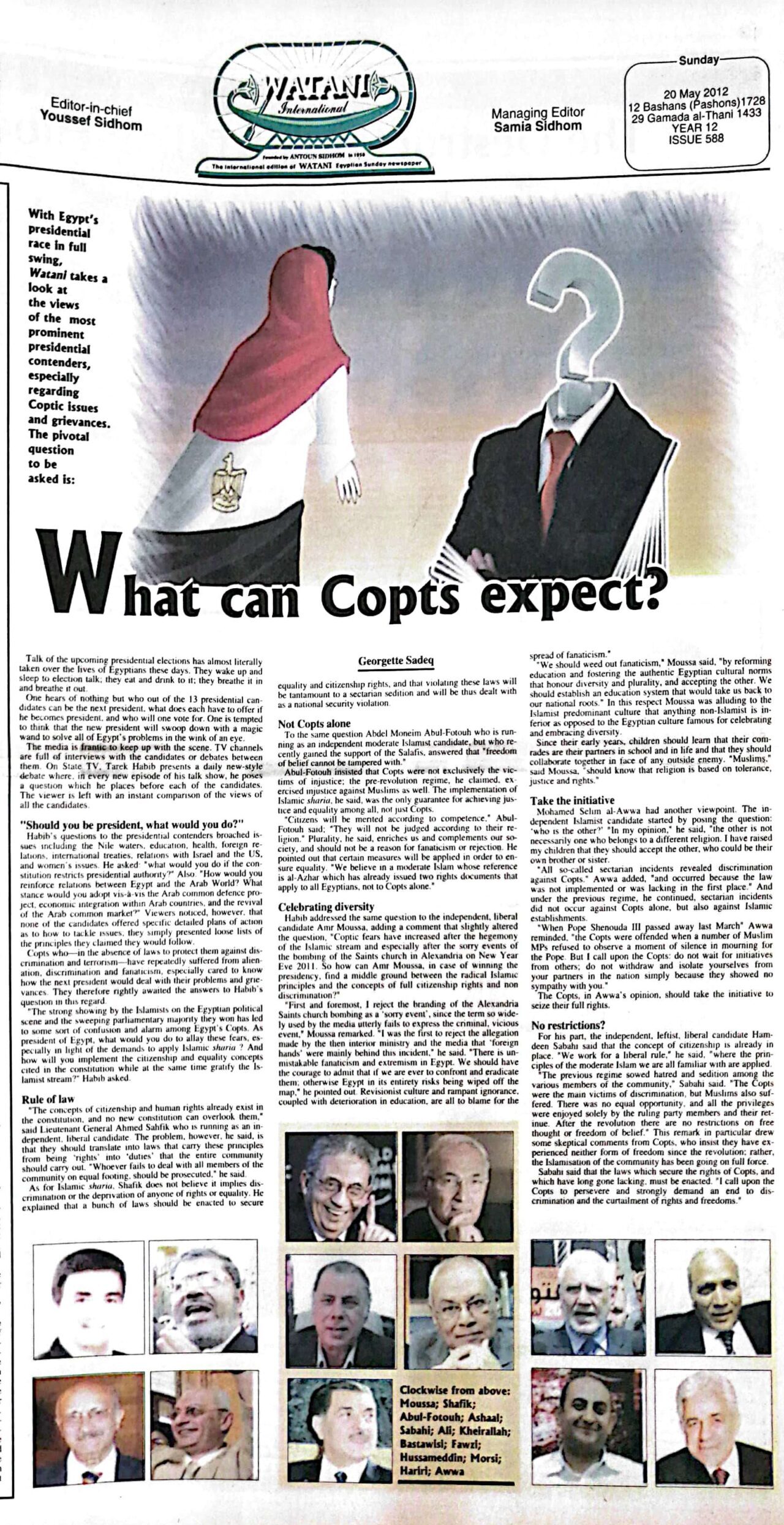 Yet days before the winner was announced, and a mere four hours into the vote count, the MB occupied Tahrir Square and celebrated their alleged win, threatening anyone who stood in their path to power. 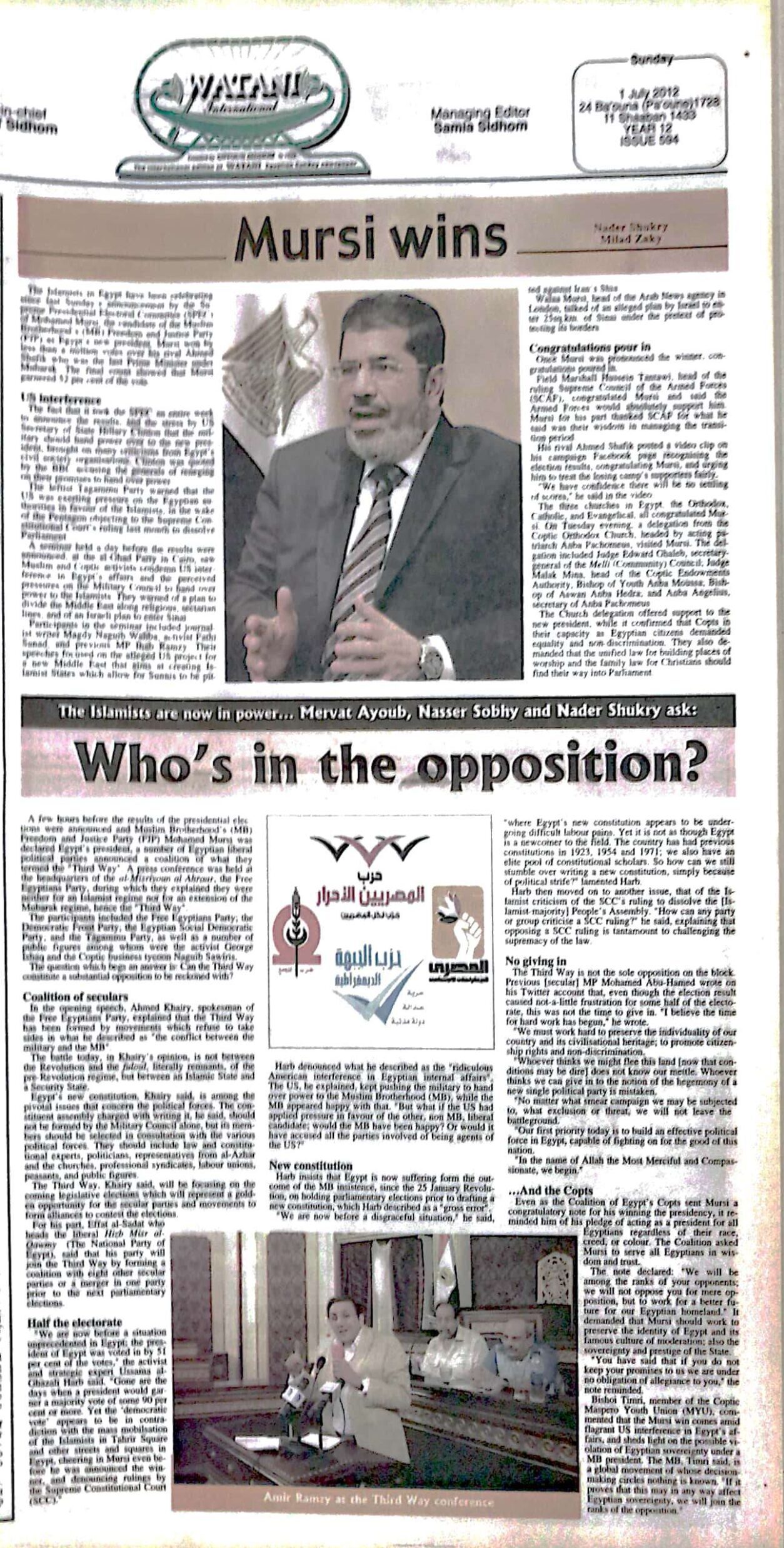 Meanwhile, Egypt’s Supreme Constitutional Court announced in June the unconstitutionality of the parliamentary election of December 2011, thereby dissolving Parliament. Once Mursi became President, he attempted to reinstate it, but lost his battle with the judiciary.

With Mursi as President, the MB tried to consolidate their throttle grip of Islamist power over Egypt. The result was a bitter ongoing struggle between the country’s Islamists and seculars. The struggle saw MBs appointed as governors and human rights monitors, a wave of blatant Ikhwanisation (Ikhwan is Arabic for [Muslim] “Brothers”), and Copts sidelined. 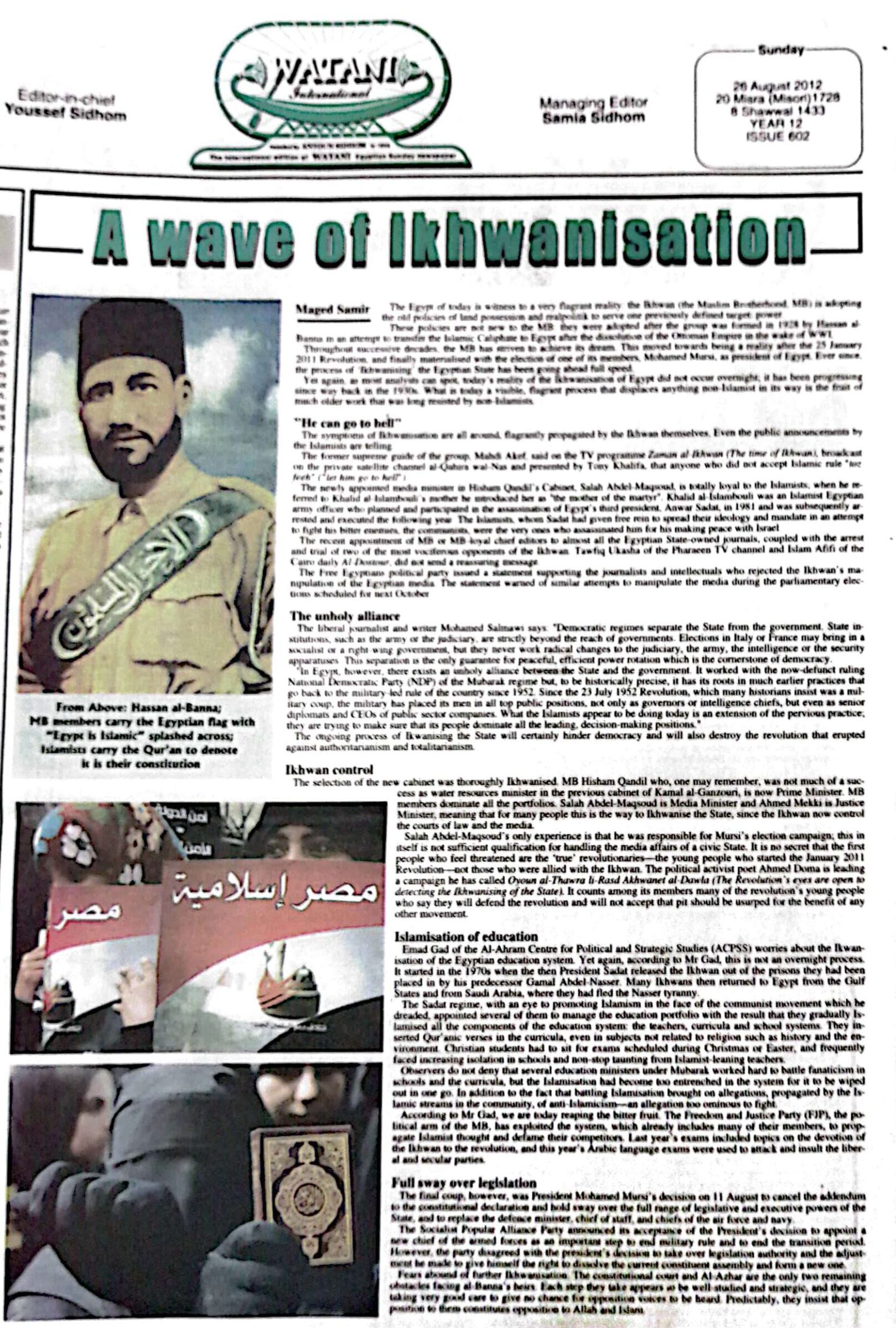 Conspicuously, Sinai became a stronghold for jihadists controlled by the Palestinian Hamas. In July, an infamous attack was conducted by the jihadists in Sinai against a military checkpoint in Rafah on the Israeli border. Sixteen Egyptian soldiers were gunned down as they had breakfast. Hamas-backed jihadis in Sinai claimed responsibility; Hamas is the Palestinian branch of the MB. The incident sent waves of pain through Egypt but, amazingly, the President never showed up at the military funeral held for the dead. Egyptians would never forget that. 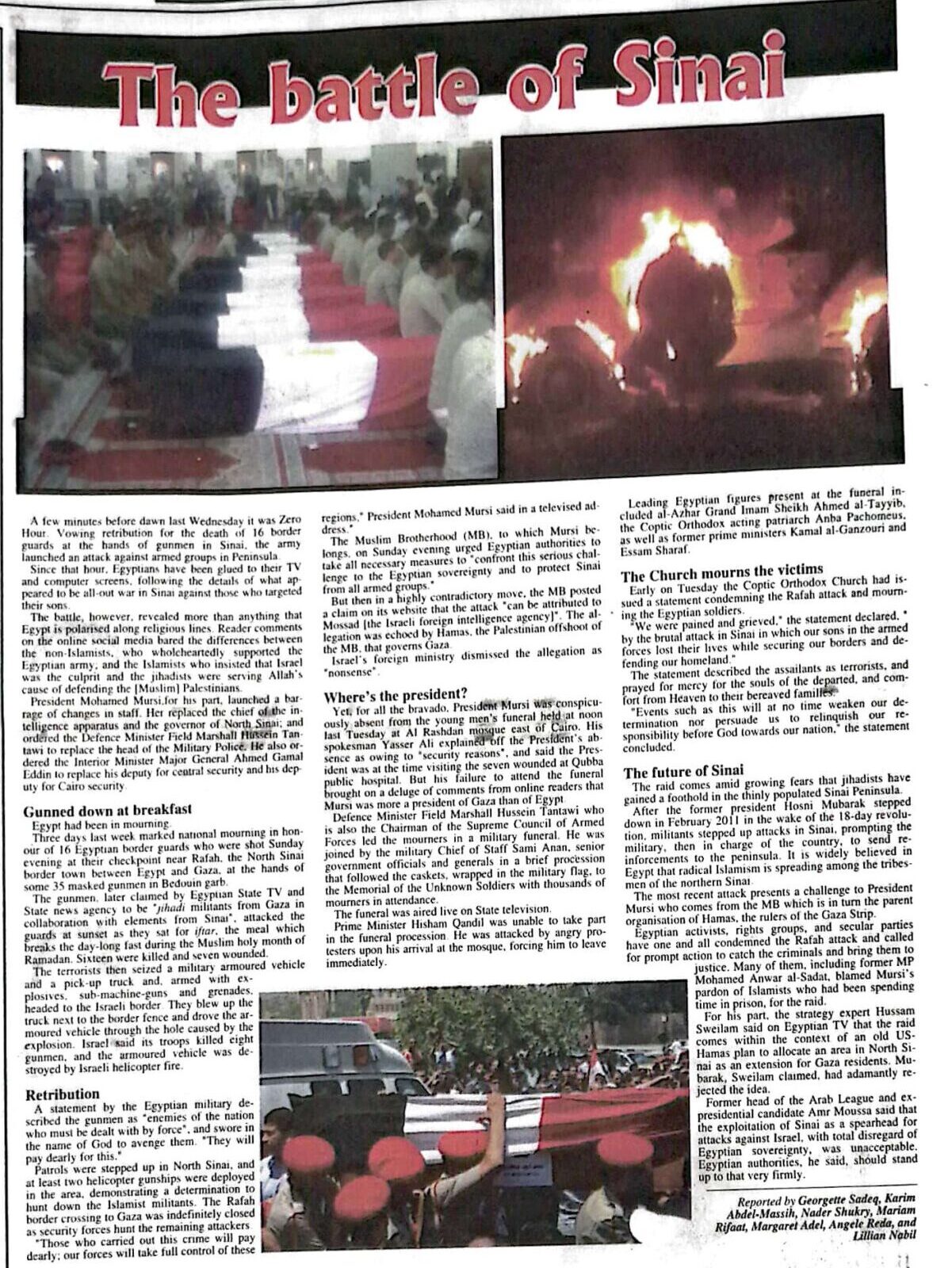 From then on, jihadists used Sinai to spearhead attacks against the military and against Copts in Rafah and other nearby towns.

The new constitution, in the meantime, had not been drafted. The divide between the seculars—including the Copts—and the Islamists in the CA had grown so great, and their differences so irreconcilable that many seculars withdrew, only to be replaced by Islamists. In October, a draft constitution, predictably Islamic, was posted on the Internet for all to see. 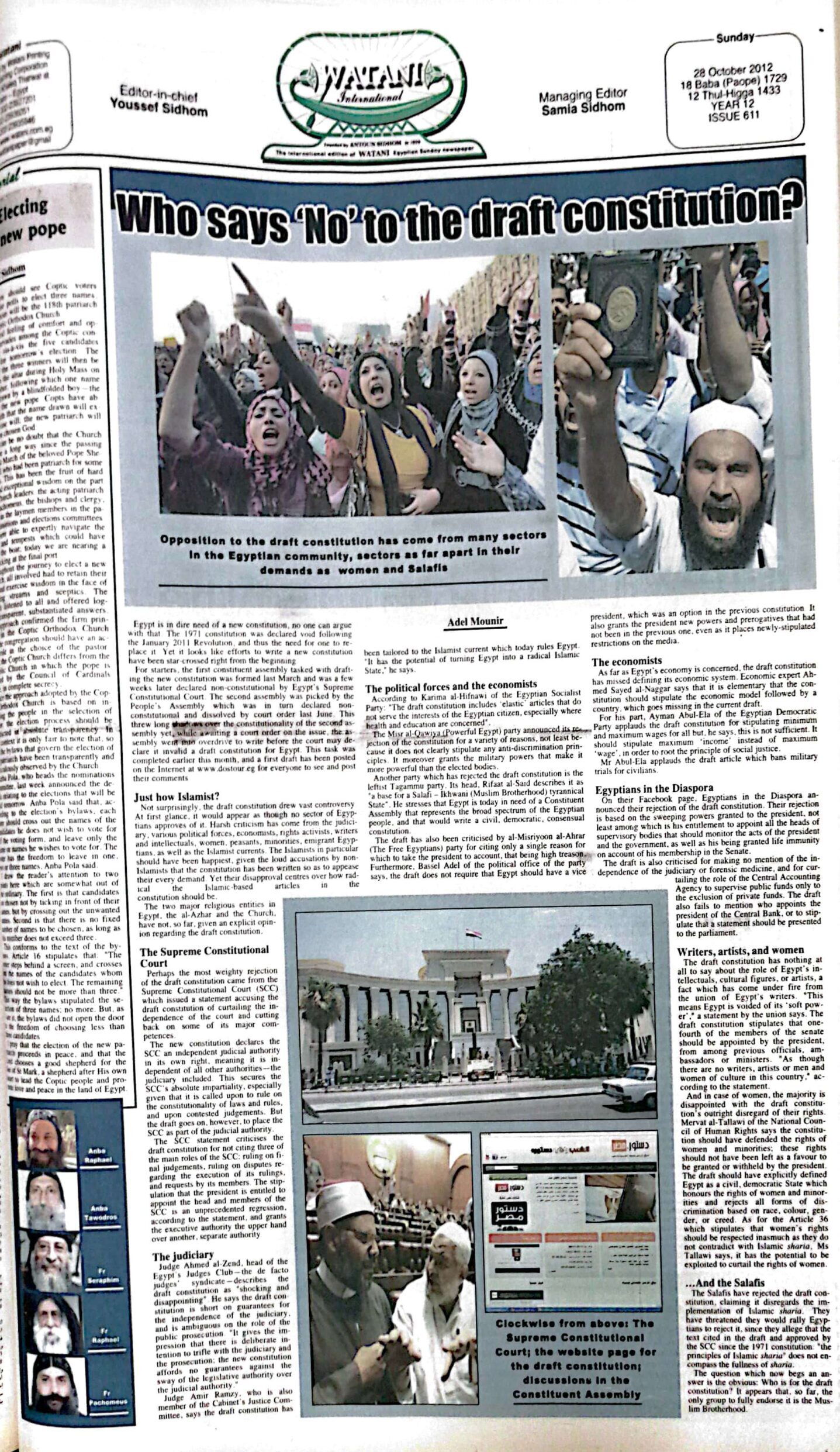 It drew harsh criticism from almost every sector in the Egyptian society: seculars saw it as disastrously restrictive and Islamist; Salafis saw it as not Islamic enough. In November, the Churches officially withdrew from the Assembly, releasing a statement that cited the reasons for withdrawal. By the end of November, the CA unanimously approved the draft constitution and said it would present it to the President who would then offer it for public approval through a referendum. Egyptians felt that an Islamist Constitution was being rammed down their throats. 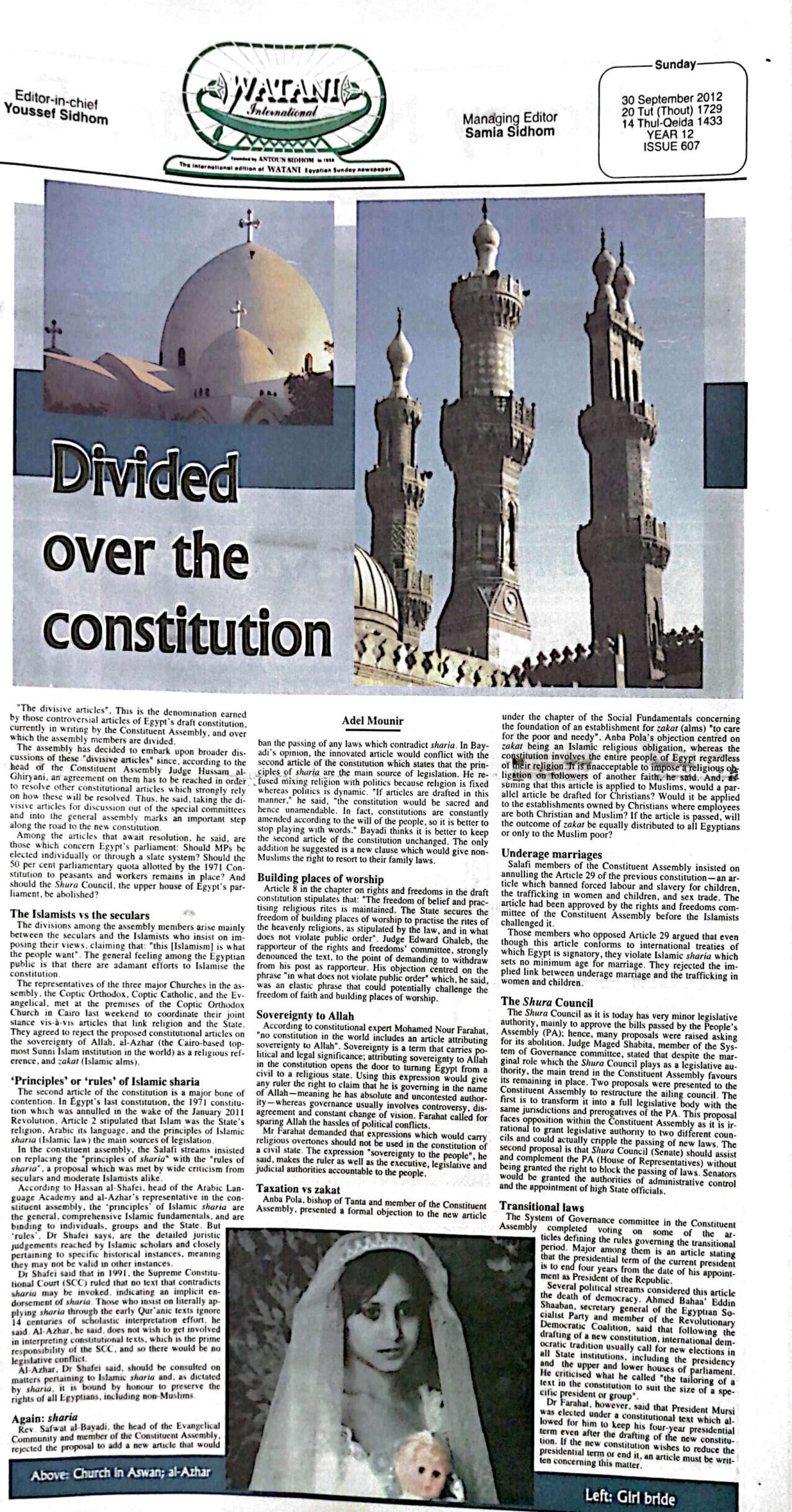 The date 22 November witnessed a disastrous move by Mursi, one that would bring on further unrest and division, and set the stage for public rebellion against him. The President issued a “Constitutional Declaration” that granted him sweeping powers and immunised his decisions against being contested in courts of law, thereby effectively putting an end to any perceived democracy. Many said that it was going back to Mubarak times, but many more in Tahrir Square said this was much worse; “at least, under Mubarak, the judiciary retained their independence,” young revolutionists in Tahrir said. “What happened on 22 November is an unprecedented curtailment of freedoms. The President now holds absolute power. Even the military never had that when they were in power.” 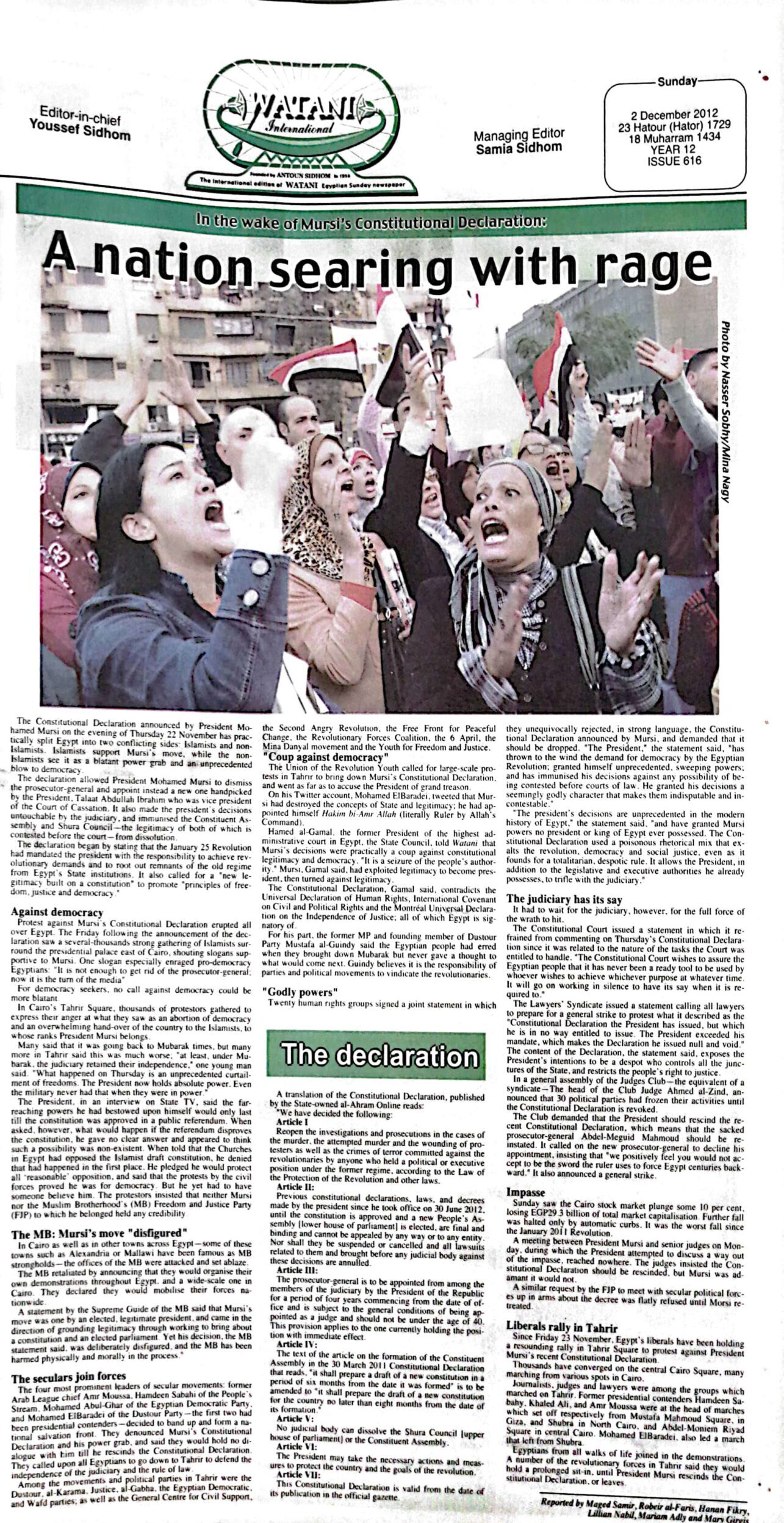 But that was the view from the secular camp. The Islamists, especially the MB, came out in wide support of Mursi. It was eminently obvious now that the divide was rooted, the battle was over Egypt itself, at stake was the time-honoured identity of Egypt.

Amid the seething turmoil, Egypt lost two figures that would go down in history for their exceptional lives. One was Tharwat Okasha (1921 – 2012), an encyclopaedic cultural figure who was once Egypt’s Minister of Culture and who was instrumental in engaging UNESCO and France in the 1960 historic effort to save the ancient rock-hewn temples of Abu Simbel, south of Aswan, from drowning under Lake Nasser once the Aswan High Dam was built.

The other figure was the Coptic politician Amin Fakhry Abdel-Nour (1912 – 2012) who played pivotal roles in two historic events in the Coptic Orthodox Church. Through his excellent relations with the Vatican, he was able to help in the 1968 return of part of the relics of St Mark from his church in Venice to Alexandria; and he also served in preparing the meeting in Rome in 1973 between Pope Paul VI and the Coptic Pope Shenouda III. It was the first meeting between the heads of the two Churches since the great schism in 451. 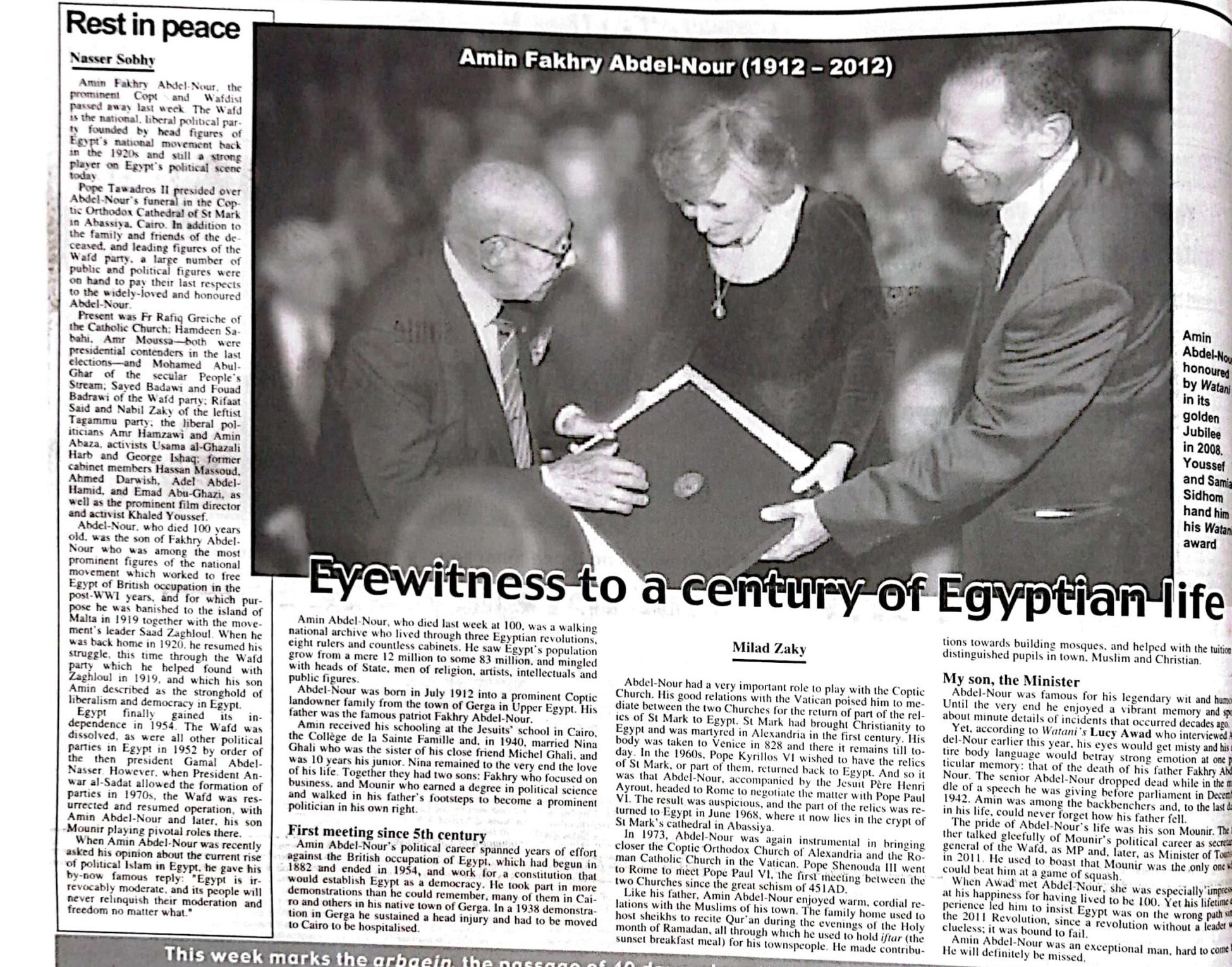 For Copts, 2012 was a year to remember. On 17 March, Pope Shenouda III (1923 – 2012) passed away. He had been Pope of Alexandria since 1971 and was widely loved and revered not only by Copts, but by Muslims too. Egypt in its entirety mourned him and bid him a warm, moving farewell. 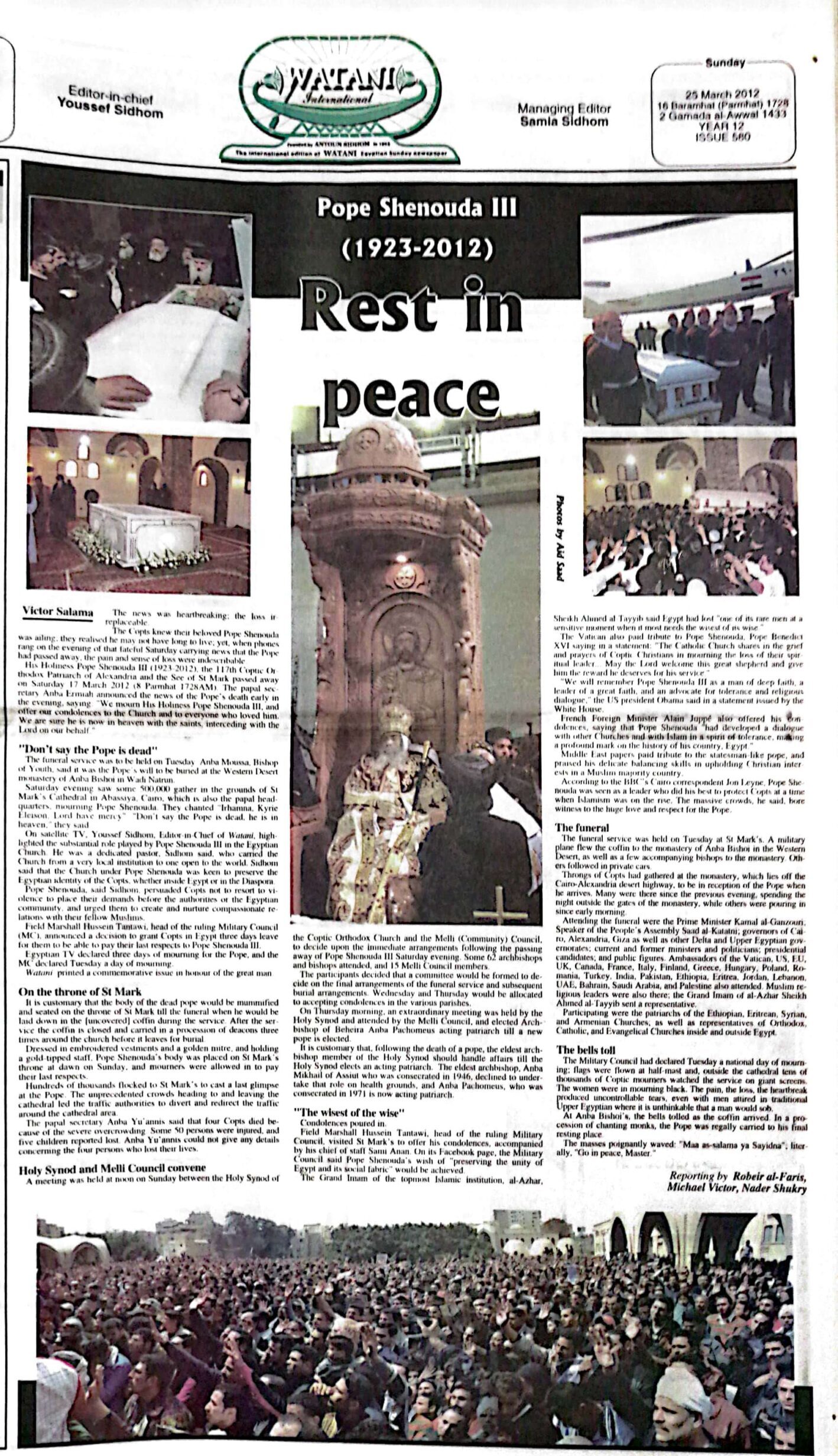 According to Church law, the oldest Bishop in the Church should assume responsibility as Acting Patriarch during the interim period until a new patriarch takes over. This task should have fallen to Anba Mikhail, Metropolitan of Assiut, but he asked to be excused because of poor health. Anba Pachomius, Metropolitan of Beheira, took on the responsibility.

Once the Church celebrated the arbaeen of Pope Shenouda, it was time to start the process of electing a new patriarch. [Arbaeen, literally “forty”, denotes the passage of 40 days on a person’s departure and was linked to the process of mummification in ancient Egypt. Today, the Church celebrates it with Mass.] The election process involved selecting a 2412-person electoral college according to specific criteria, and shortlisting the nominees from 16 to five candidates out of whom three were elected to enter an altar draw that would determine the patriarch. 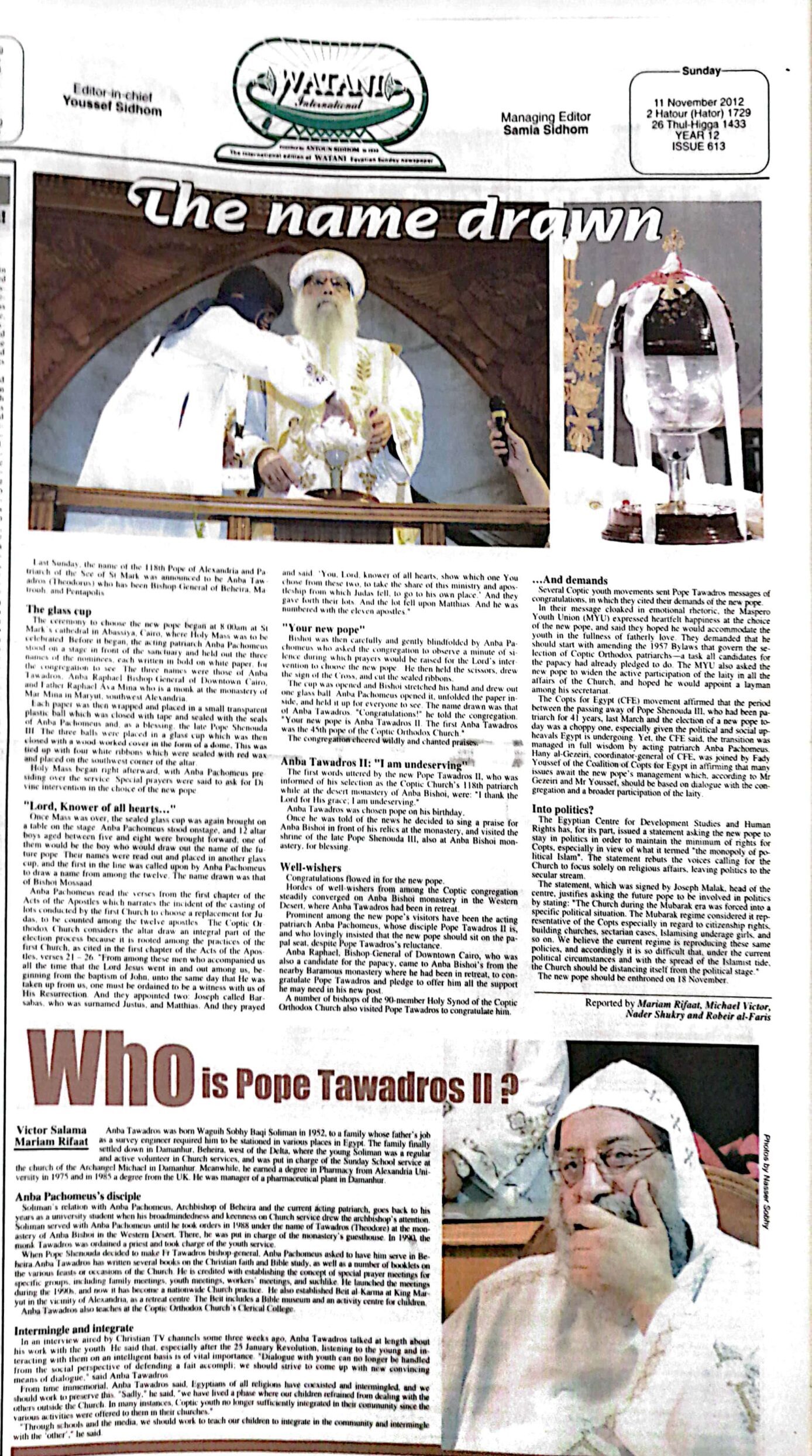 Anba Pachomius supervised the process meticulously on all levels, calling for three fasts, one before each election step, to call for Divine intervention. Finally, the altar draw was made following Mass on 4 November, and the name drawn was announced by Anba Pachomius to the Coptic congregation: “Your new Patriarch, Anba Tawadros”. On 18 November, Anba Tawadros was enthroned Pope of Alexandria and Patriarch of the See of St Mark. 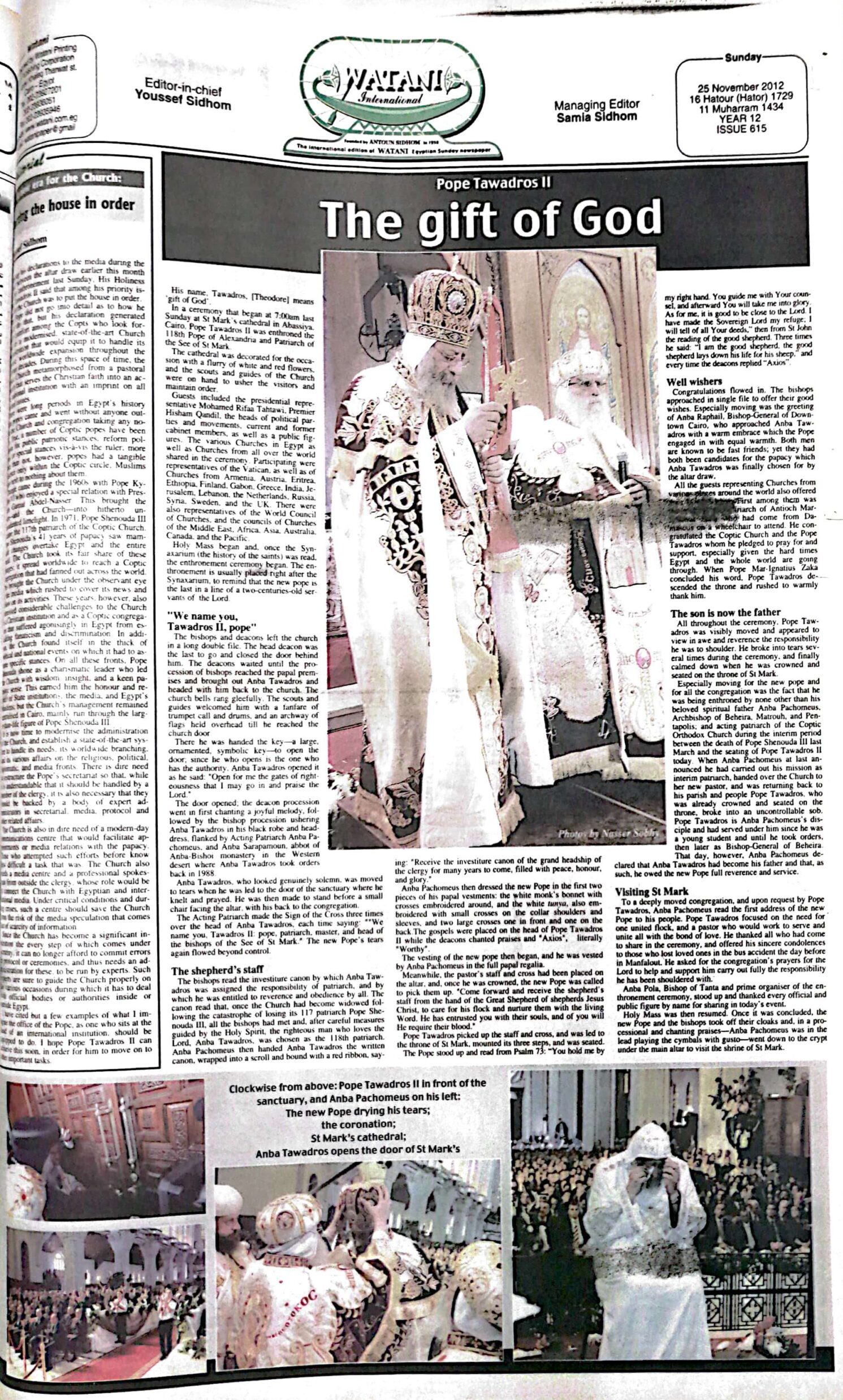 It is not possible in this review to cite special stories Watani International printed on specific topics; every story published on our pages that year was special and worth a read. But I give tribute here to the reporters who did the work, in order of seniority: