2013: Egypt rids herself of Islamist regime

Given that Watani International is this year marking 20 years in print—our first issue was printed on 18 February 2001—we have promised our readers to publish every month a review of our issues during that time, year by year. We already reviewed the issues from 2001 to 2012; today we keep good on our promise by covering the first half-year of 2013. That was the year that followed the post-Arab Spring election that brought to power a Muslim Brotherhood (MB) regime, and saw Egypt fight for her Egyptian identity which the MB attempted to wipe out by veering towards Islamism and cancelling all the tenets of the democracy that brought them, albeit with a very thin margin, to power. 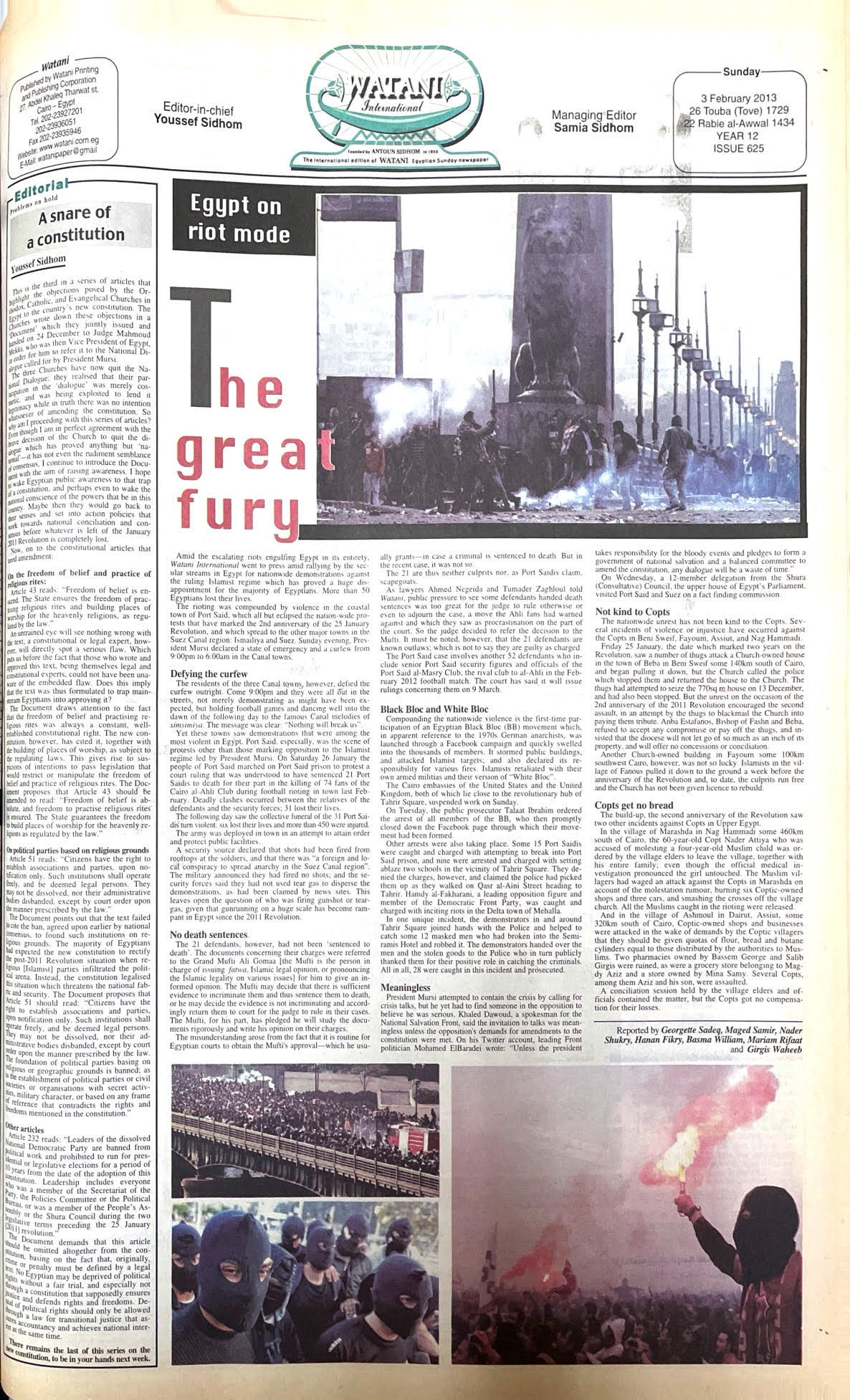 The year 2012 had closed to two ominous notes:

President Mursi issued in November a “Constitutional Declaration” that granted him sweeping powers and immunised his decisions against being contested in courts of law, thereby effectively putting an end to any perceived democracy. A strongly Islamic-leaning constitution had been drafted, overruling Egypt’s seculars and Church representatives who had been on the drafting committee; they consequently stepped down and issued a statement giving their reasons for doing so.

The year 2013 set in to growing conflict between Egypt’s seculars—that includes all moderates and Copts—and Islamists. Prominent issues involved disputes over culture, women’s rights and moderate views of Islam. 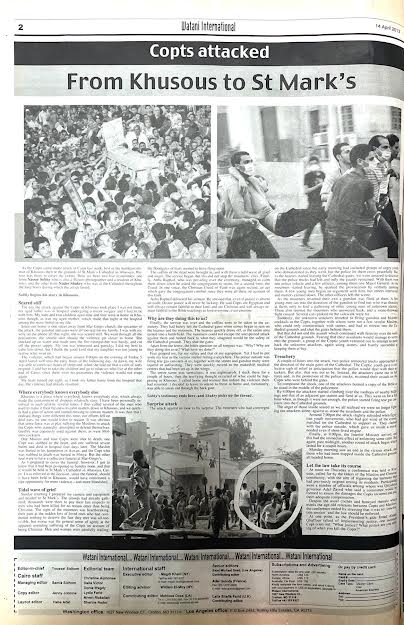 Minya, some 250km south of Cairo, which is the birth province of Taha Hussein, the blind intellectual who became a prominent enlightenment figure in 20th-century Egypt, and which hosts a bust of Hussein in its most important square, rose one day in February to find the bust gone and its pedestal disfigured. The crime was blamed on the Islamists, who mainly downplayed it, and incensed the public who were rightly proud of the statue. But Minya had an Islamist Governor, Mustafa Kamel Eissa, and Islamists see statues as idols, and no culprit was caught. Ultimately, Hussein’s bust was replaced by a new one. 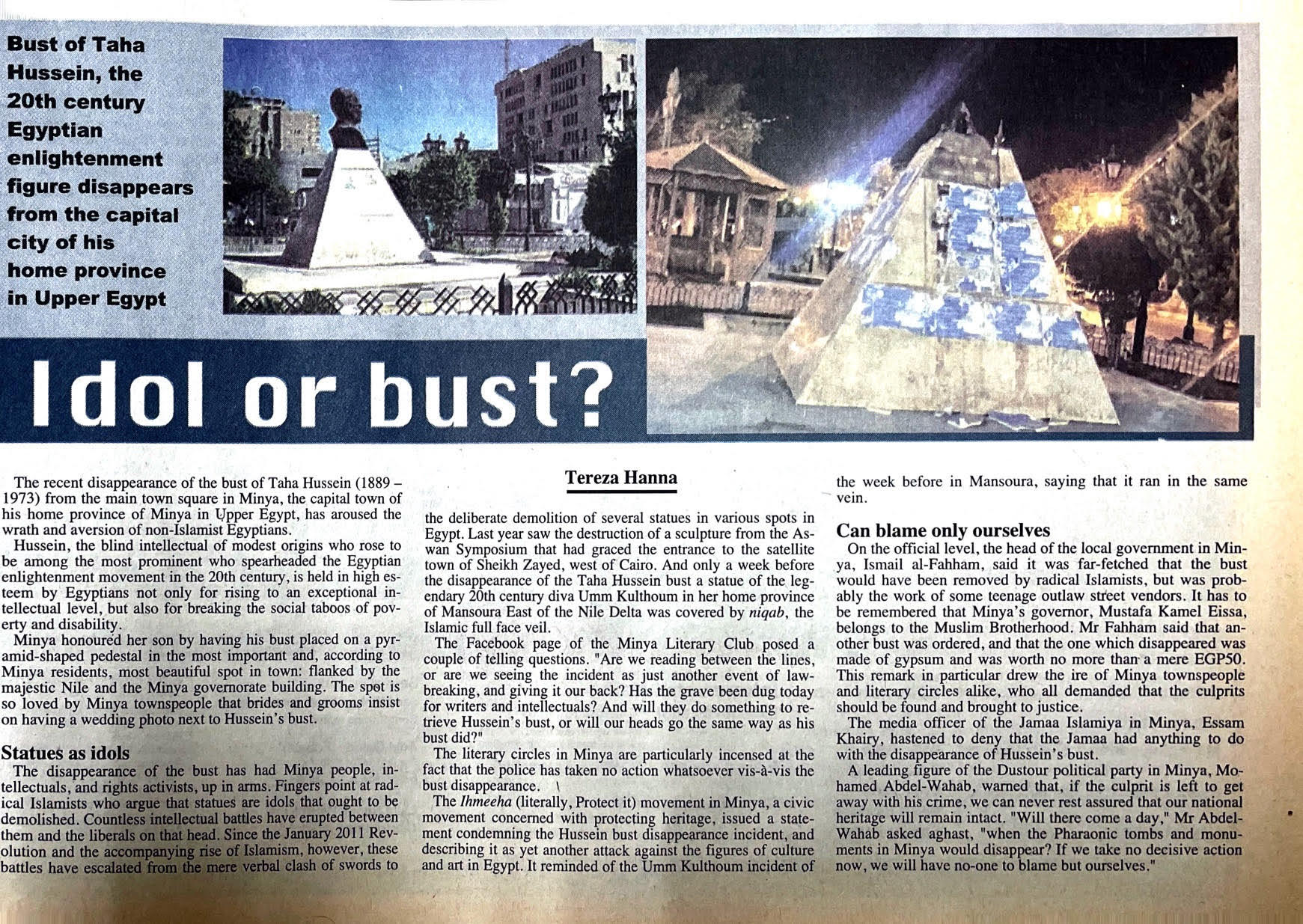 With public dissatisfaction reaching boiling point, Egypt went on riot mode, protests were the only tool at hand for Egyptians to express their discontent and fury. Not surprisingly, women were a main component in the protests; they had a lot at stake. But deplorably, this resulted in horrendous aggression against them: they were beaten, attacked with knives and sticks, and sexually assaulted by Islamists. The general sentiment was that in breaking women, the Islamists were out to break the nation.

On the official level, women were not only deprived of leading positions, but were removed from such posts whenever possible. Watani International reported in May on an incident in Beni-Sweif, some 100km south of Cairo, where Sharbat Taha Hassaan was removed from her post as head of local government of the village of Dalaass to a lower administrative position. Hassaan, who had excellent credentials and evaluations, had been in for a promotion but was demoted on pressure from local Islamists because she was a woman and was not a member of the Muslim Brotherhood’s Freedom and Justice Party. 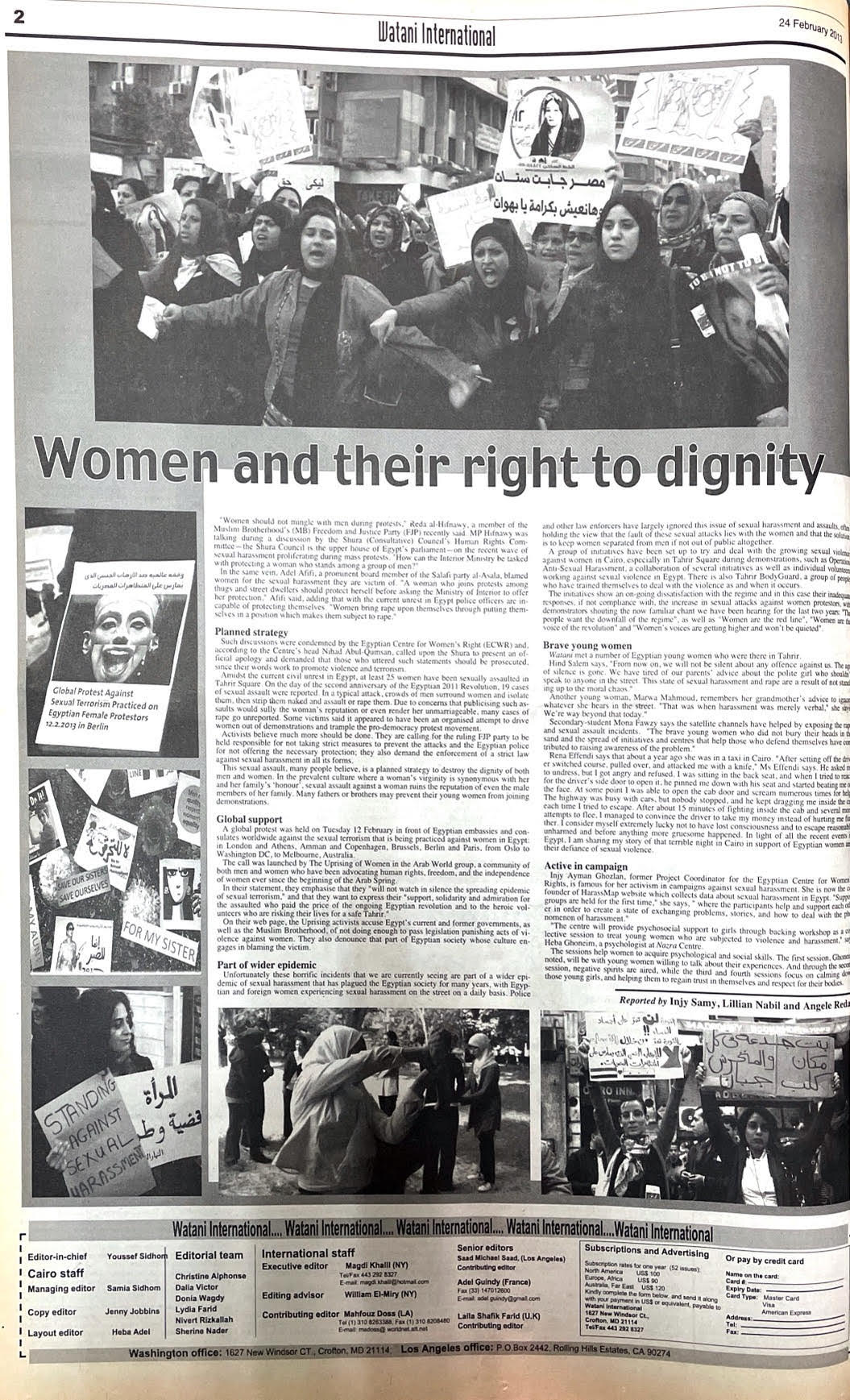 As Egypt advanced towards April, May, and June, Islamist influence escalated, taking aim at the basic institutions of culture and democracy. In April, the Islamist majority Shura Council—the upper house of Egypt’s parliament which was then in charge of enacting laws, given that the lower House of Parliament had been ruled unconstitutional and suspended by the Supreme Constitutional Court—passed a law that lowered the retirement age of judges from 70 to 60. This meant that, at the stroke of a pen, 3500 senior judges, a quarter of Egypt’s judges had been made redundant. 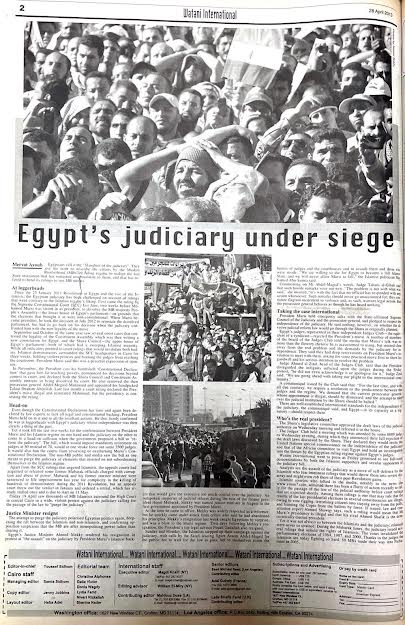 The Islamists also targeted Egypt’s culture by appointing in June a MB Minister of Culture Alaa’ Abdel-Aziz who made it no secret that he was there “to purge the ministry of corruption”. He started directly by dismissing en masse the leading figures in the Ministry, all of whom were renowned enlightenment figures. Among them was Ines Abdel-Dayem, head of Cairo Opera House, who apart from being a masterful flautist; was acclaimed as a competent manager. [Ms Abdel-Dayem is currently Egypt’s Minister of Culture]. Her dismissal in 2013 brought on a wave of angry protest, especially that it was given religious cover by the Salafis in Parliament, who demanded that ballet should be banned in Egypt because it was an art that involved near-nudity and spread vice. 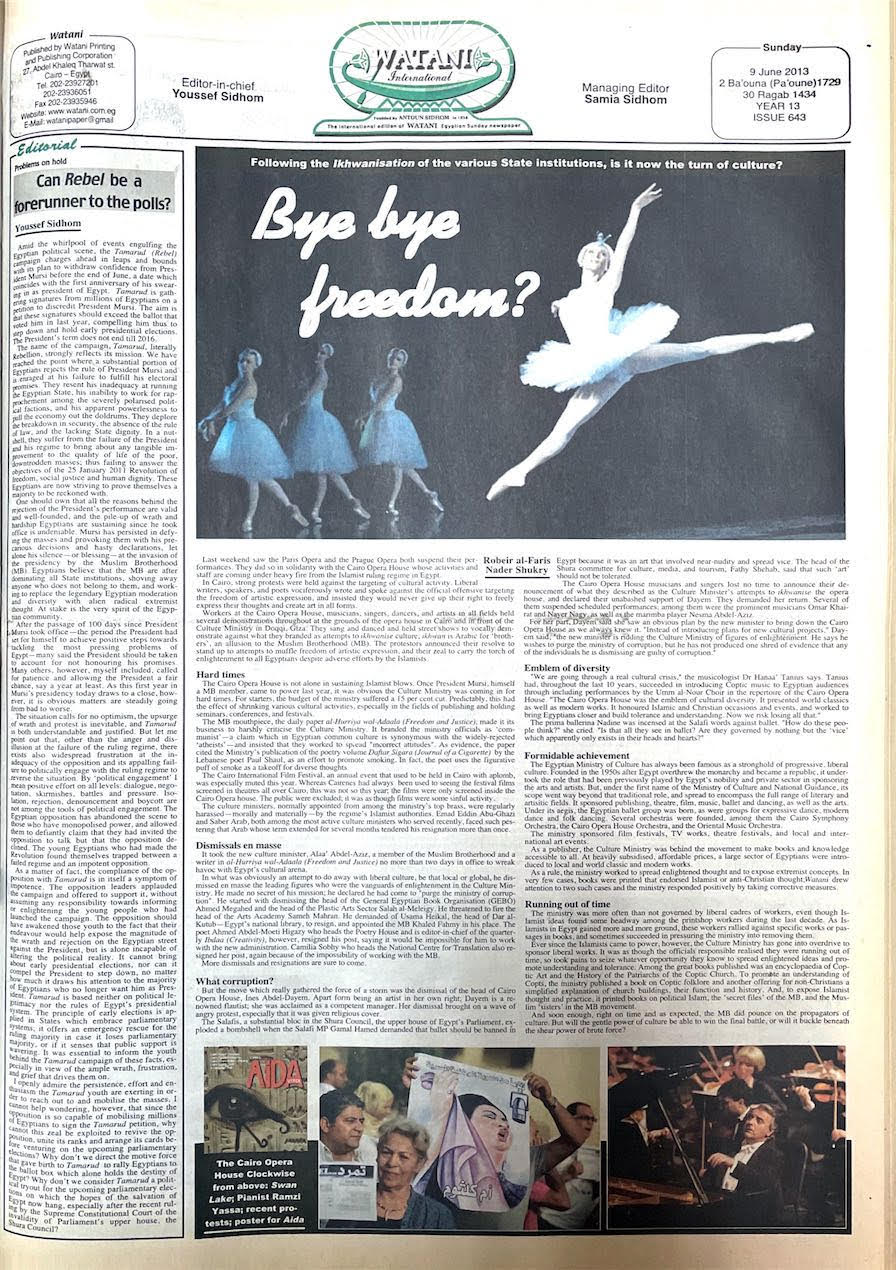 This resulted in vocal street protests by those involved in the culture field, the Cairo Opera House suspended its performances and was supported by the Paris and Prague opera houses which also suspended their performances in solidarity that weekend of 1-2 June.

On the Coptic front, a horrendous incident took place in mid-April. It started with clashes between Muslims and Copts in the northeast Cairo district of al-Khosous, leaving Coptic homes, nursery, and property burned; and six Copts and one Muslim dead. A funeral service was held for the Copts a day later at St Mark’s Cathedral in Abbassiya, Cairo, but the hearses and mourners leaving the Cathedral after the funeral were showered with stones by a large Muslim mob who had gathered outside. The hearses quickly fled, but the mourners went back into the Cathedral grounds for safety and shut the gates. What followed was a vicious attack against them with stones and Molotov cocktails that lasted some five hours before the police could bring about some calm. The incident marked an unprecedented attack against the seat and headquarters of the Coptic Pope. 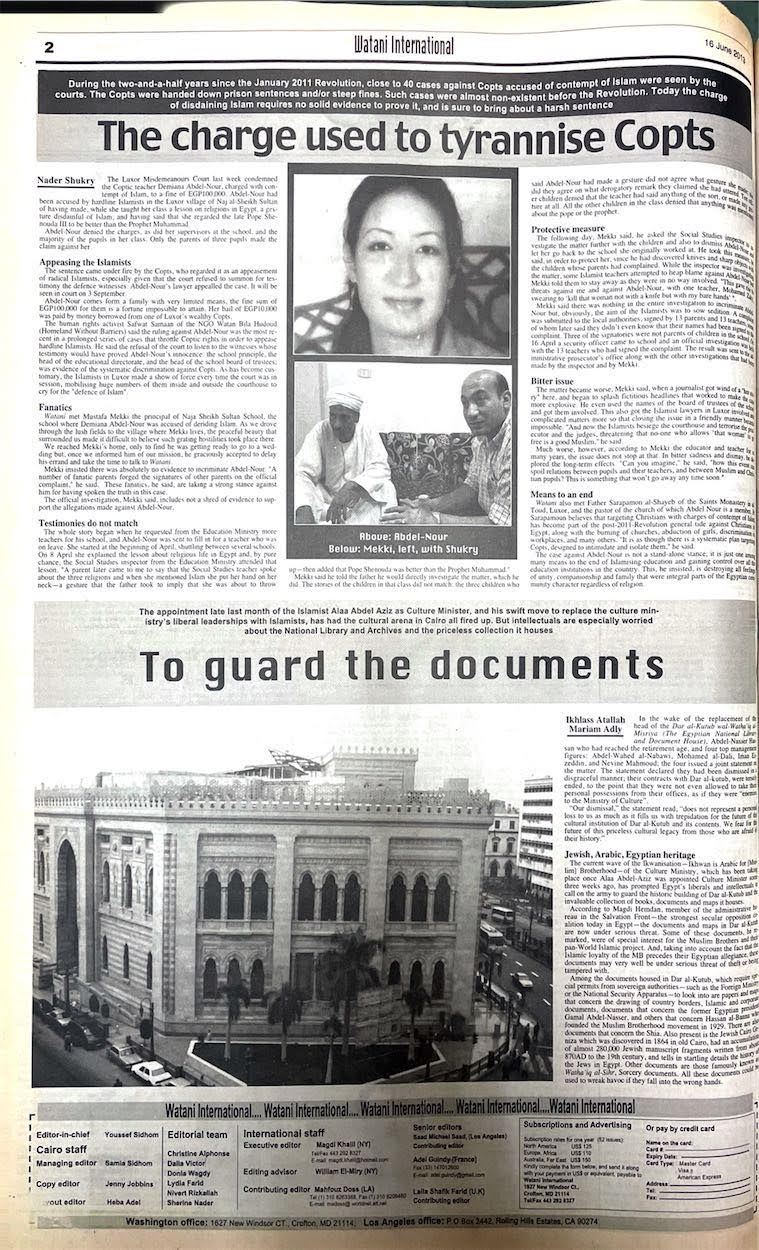 Discrimination and attacks against Copts continued unchecked. During the two-and-a-half years since the January 2011 Arab Spring uprising, close to 40 cases against Copts accused of contempt of Islam were seen by courts. The Copts were handed prison sentences and/or steep fines. Such cases were almost non-existent before the Arab Spring. By 2013, the charge of disdaining Islam required no solid evidence, and was sure to bring about a harsh sentence.

The charge used to tyrannise Copts

To sum it up, Soliman Shafiq expressed in Watani an opinion in June 2013 that, under the MB regime, Copts were fighting for survival not rights. “Mursi’s group—the MB—and their allies are outspoken in their hostility towards Copts. Since they won the parliamentary majority in June 2012 there have been 43 sectarian attacks against Copts during which 60 Copts lost their lives and 918 were injured. Twenty-four church buildings were assaulted during this period and 124 families were forcefully displaced from their home towns or villages, only 81 of which later returned home. Not one of the cases of assault against Copts was investigated.” 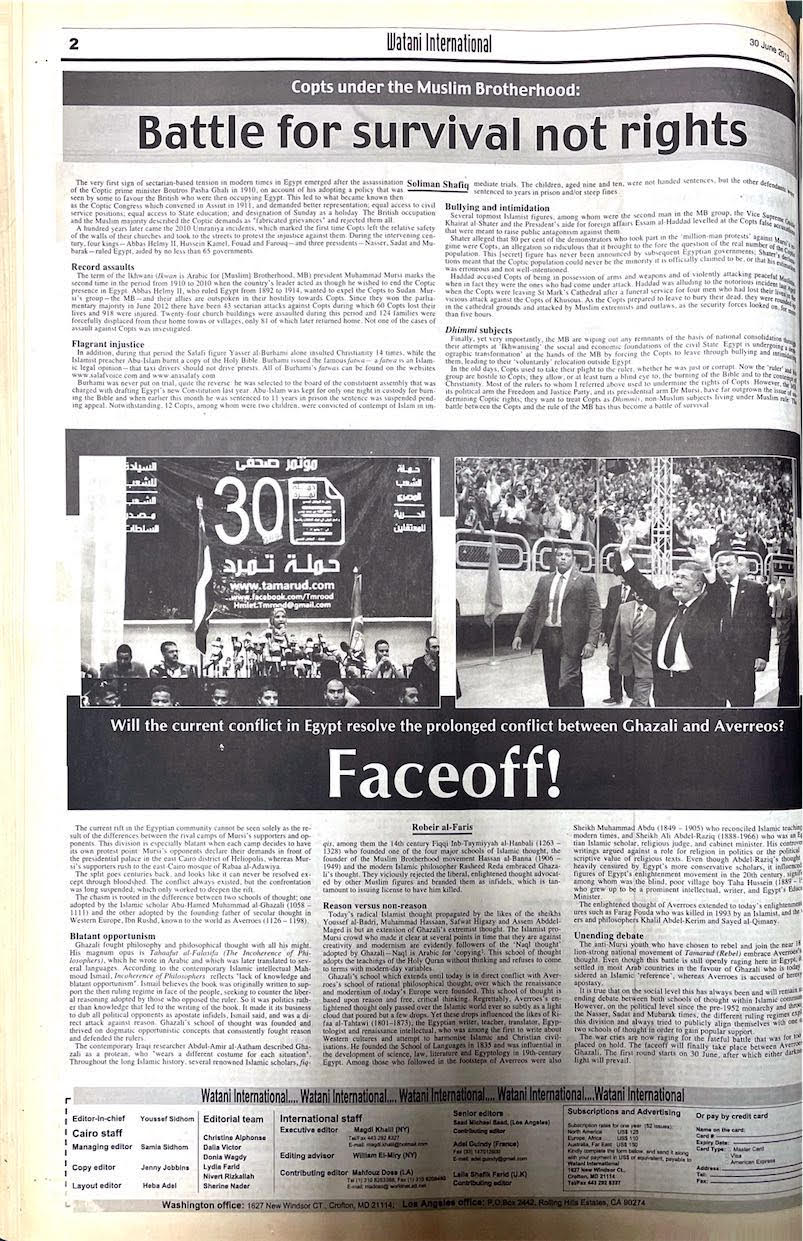 Egypt was in severe division as the Islamist regime attempted to stifle and outlaw all opposition, and to turn Egypt into a country revolving in the orbit of a pan-Islamic world order. It did not help that the economy went into a nosedive, and that Sinai was a hotbed for Islamist jihadis who barricaded themselves in its mountain caves and spearheaded vicious attacks against Egyptian soldiers and civilians.

In February 2013, a grassroots movement had emerged under the name Tamarud, literally Rebellion, that called for gathering signatures to call for the stepping down of the Islamist President Mursi on 30 June 2013, one year on his becoming President. Mursi had been elected by 15 million votes; it was the goal of Tamarud to gather 15 million signatures to have him removed and call for election of a new president. By mid-June 2013, Tamarud had actually gathered 22 million signatures. 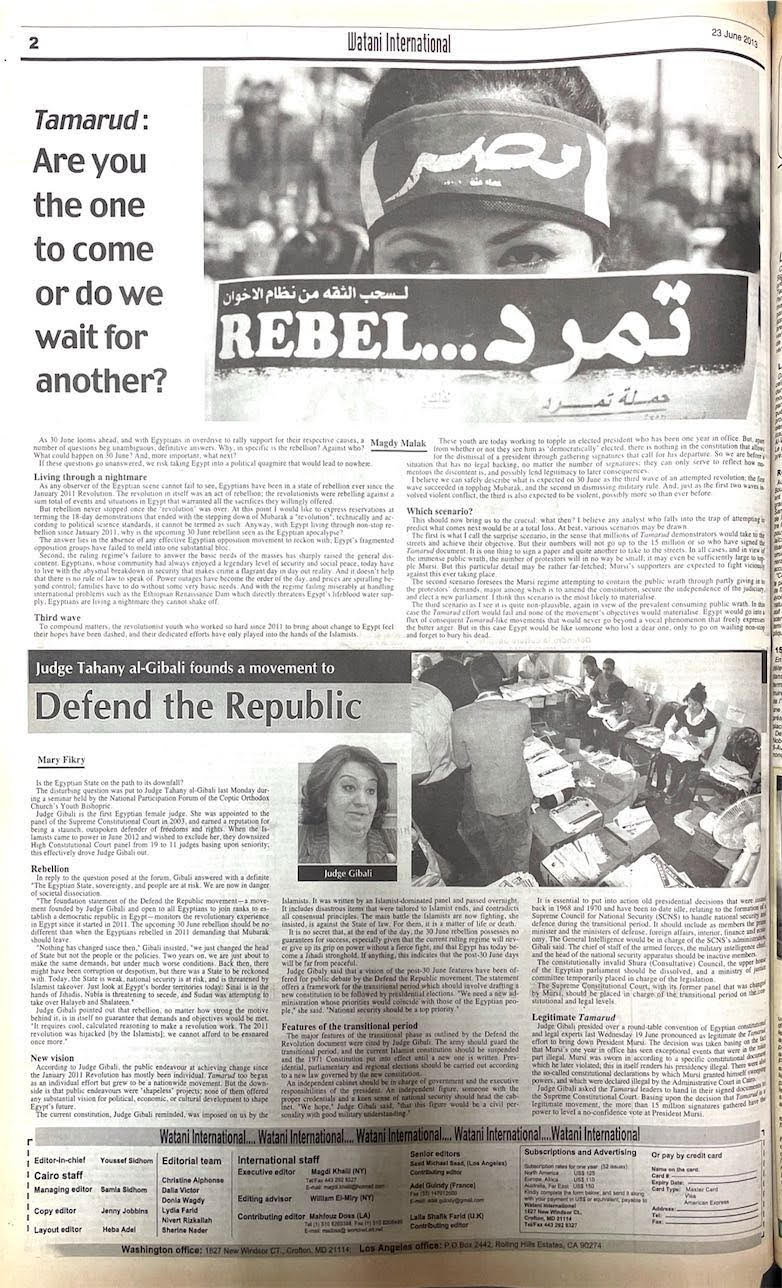 For his part, Mursi downplayed the opposition and belligerently persisted in his Islamist, non-democratic policies. Divisions in Egypt escalated, and serious fears arose that the country was on the verge of civil war.

On social media, Tamarud called upon Egyptians to go down on 30 June in peaceful protest to demand that President Mursi leaves. The call gained public support, and millions upon millions from every part of Egypt took to the streets that day. 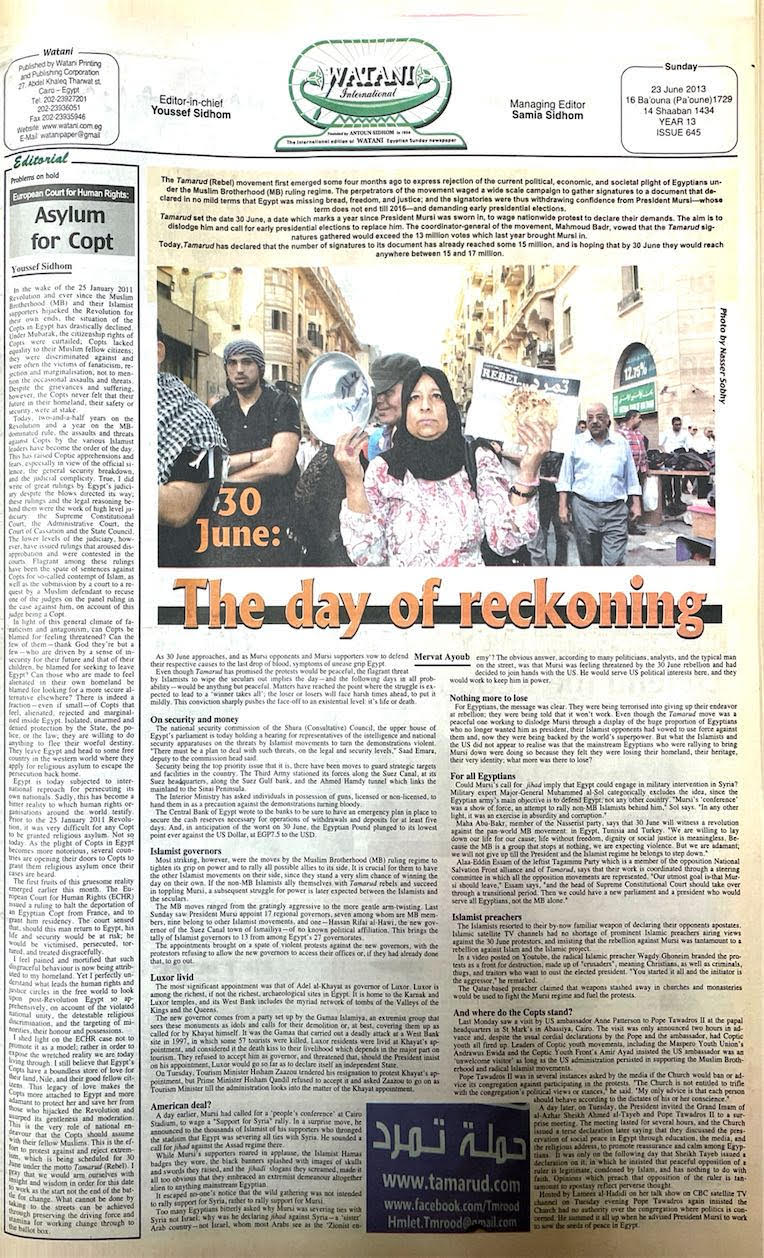 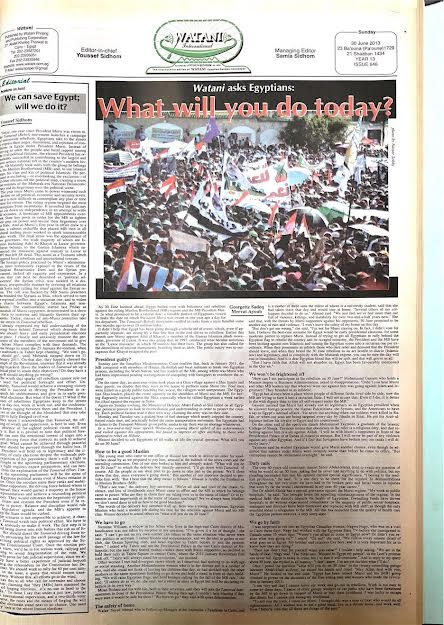 One of Watani’s junior reporters who lives in the Cairo suburb of Shubra remembers going down to head to Tahrir Square which was to be the epicentre of the revolt, only to find a dense crowd of men, women, and even children. He kept waiting for the crowd to move on, but it never did. Finally he climbed to the rooftop of a high building, and was amazed to see the crowds filling all the streets as far as his eyes could see. He understood then why the crowd was at standstill.

That was the 30 June 2013 Revolution. The army gave Mursi a 48-hour ultimatum to resolve the crisis, otherwise the army would put into action a roadmap drawn to rescue Egypt form the threat of civil war. Mursi rejected the ultimatum and, on 3 July, Egypt’s Head of the Constitutional Court, Justice Adly Mansour was sworn in as Interim President. Egypt started its march towards a new constitution and new president.

On 7 July 2013, Watani International came out with the headline “New age for Egypt”. 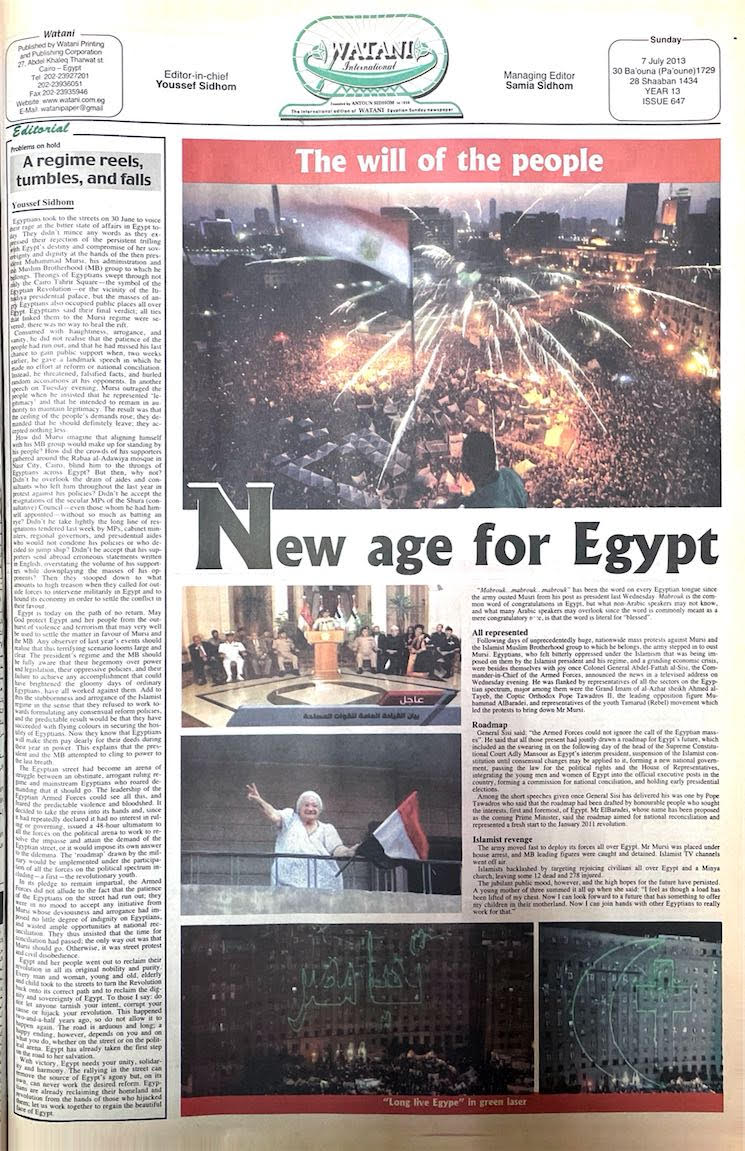