It was no simple choice: What would the first issue of Watani International look like? How would we introduce ourselves to our readers? A good introduction was sure to earn us loyal readers who would care to follow us from then on, whereas a poor introduction would seal our fate as not worth reading. Finally, there it was right before our eyes: the obvious choice would be to present the most significant events during the recent months, the events that captured the hearts and souls of Copts inside and outside Egypt. So it was that Watani International’s first issue came out with a front page carrying a story titled “Our Lady of Assiut”, relating the manifestations of the Holy Virgin on the tower and domes of the church of St Mark’s in Assiut in August 2000, and the awesome spiritual climate and miracles these manifestations generated. 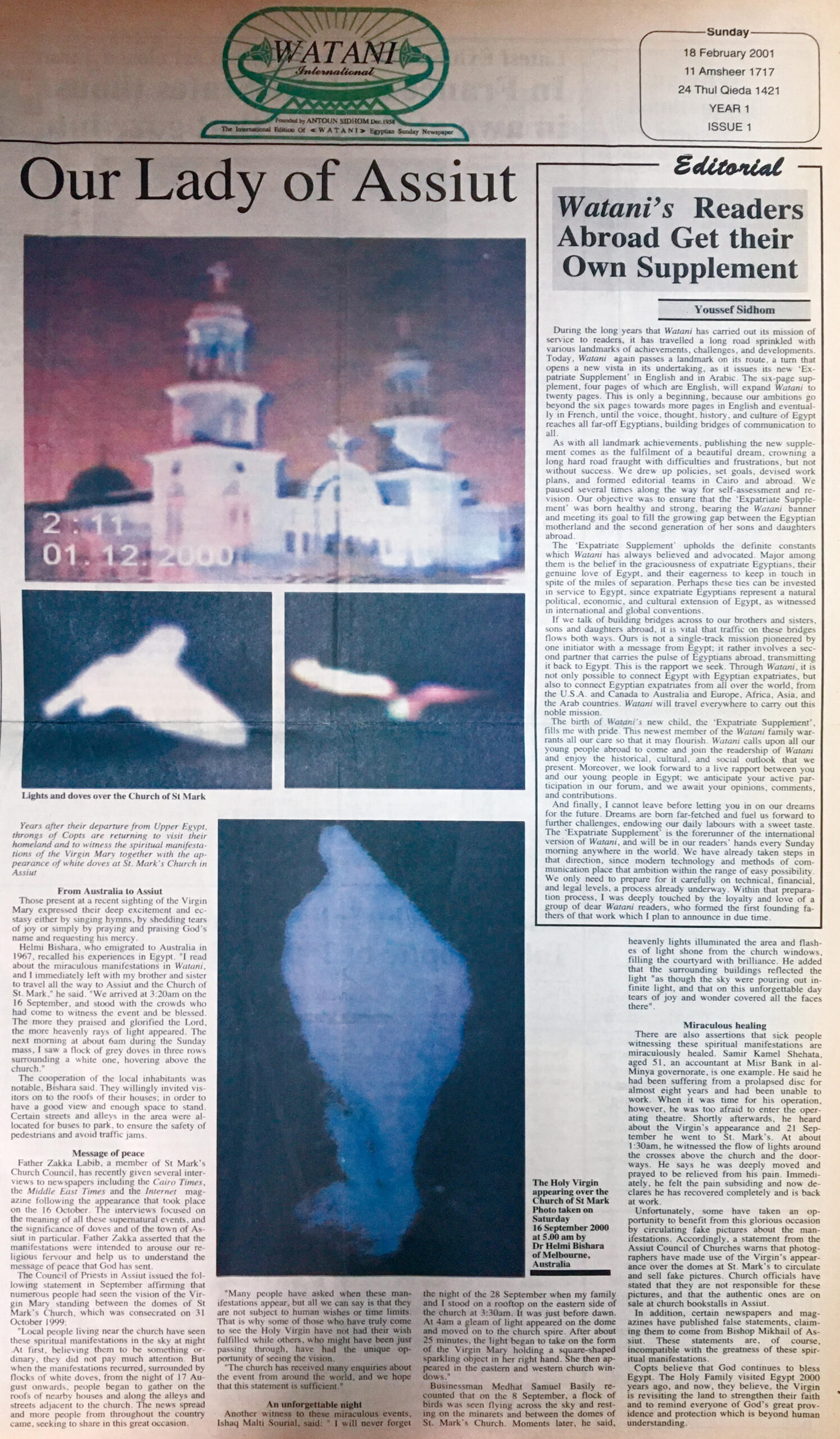 On our last page of Watani International of that issue, we presented a roundup of the notorious attack against the Copts of al-Kosheh in southern Egypt, which had occurred on the New Year Eve of the second millennium and which left 22 Copts dead. 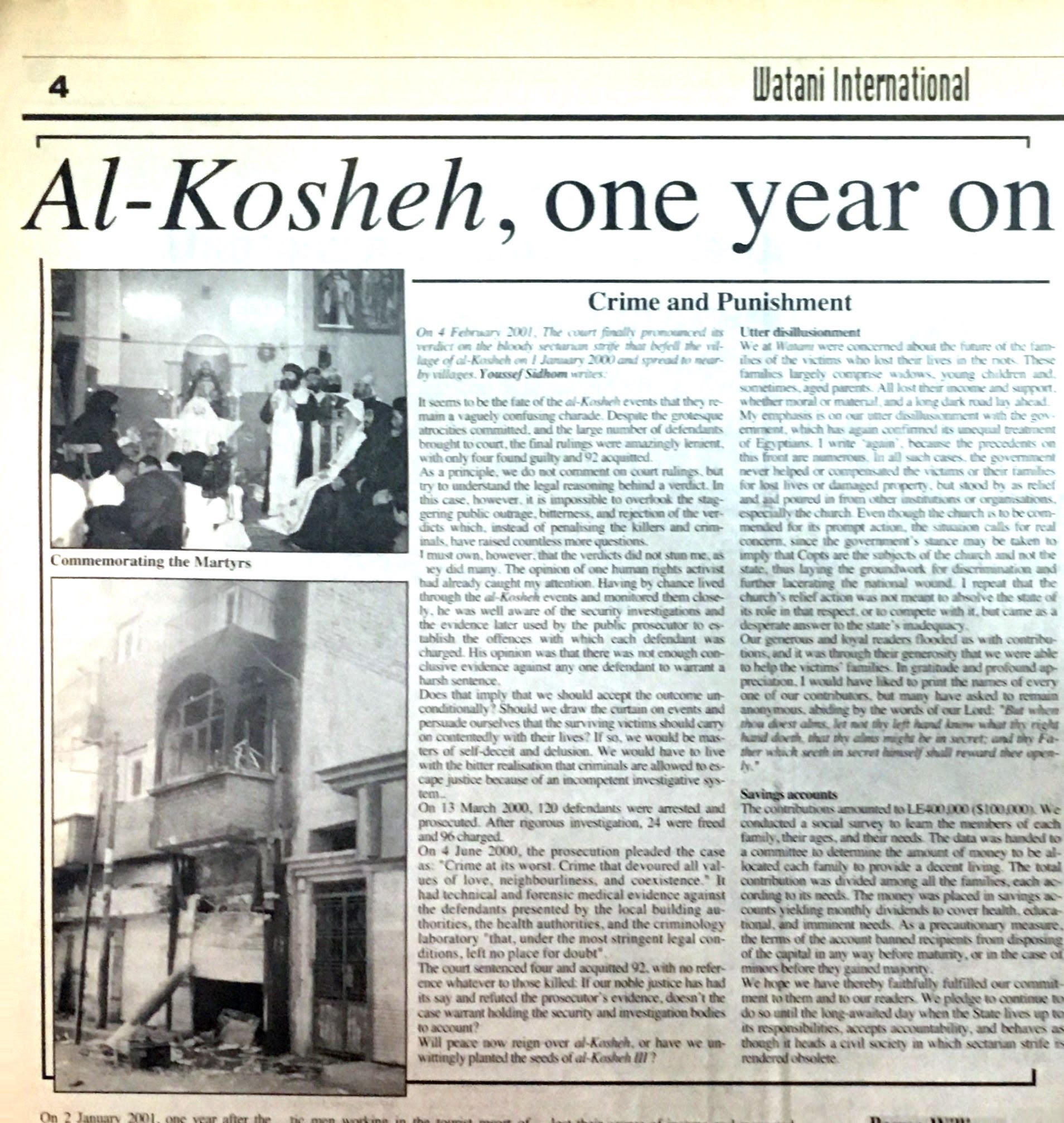 Having started its weekly journey into the world of journalism, and with a view to its target reader as the Egyptian or Copt living outside Egypt, Watani International continued to provide a plethora of varied content every week.

March came in with its celebration of women: 8 March marks International Women’s Day, 16 March Egyptian Woman’s Day, and 21 March Mothers Day. Watani International printed Nadia Barsoum’s stories about the many firsts Egypt’s women had achieved in the 20th century, and the development taking place with women in Upper Egypt under the title “Upper Egyptian women lead the way”. 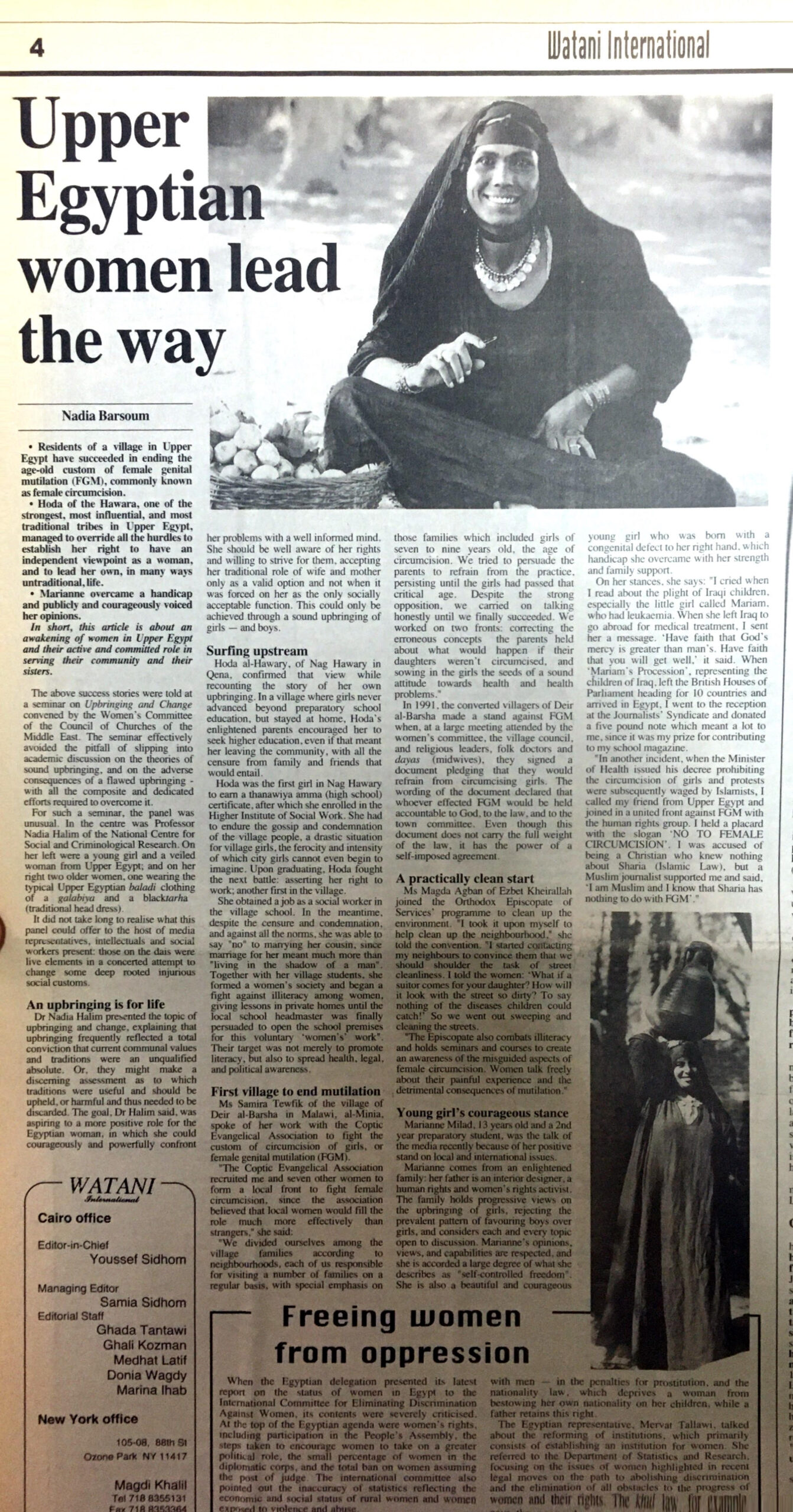 The months rolled by with Watani International reporting on Egyptian and Coptic heritage and history, art and music, environment and nature preserves, sports and current events, even readers’ letters to Watani, which came in a monthly section titled Watani Mail.

In June 2001, Egypt lost Ragheb Moftah (1898 – 2001) the musicologist whose life mission was to preserve Coptic melodies through inscribing them in musical notation following centuries of oral tradition. Watani’s Adel Kamel (1942-2003) wrote on Dr Moftah whom he venerated.

There can be no two minds about the fact that 9/11 was the most significant incident in 2001. Watani International instantly recognised its perilous divisive potential, and countered with an opinion piece by Egyptian intellectual and writer Milad Hanna (1924 – 2012) titled “Accepting the other”. 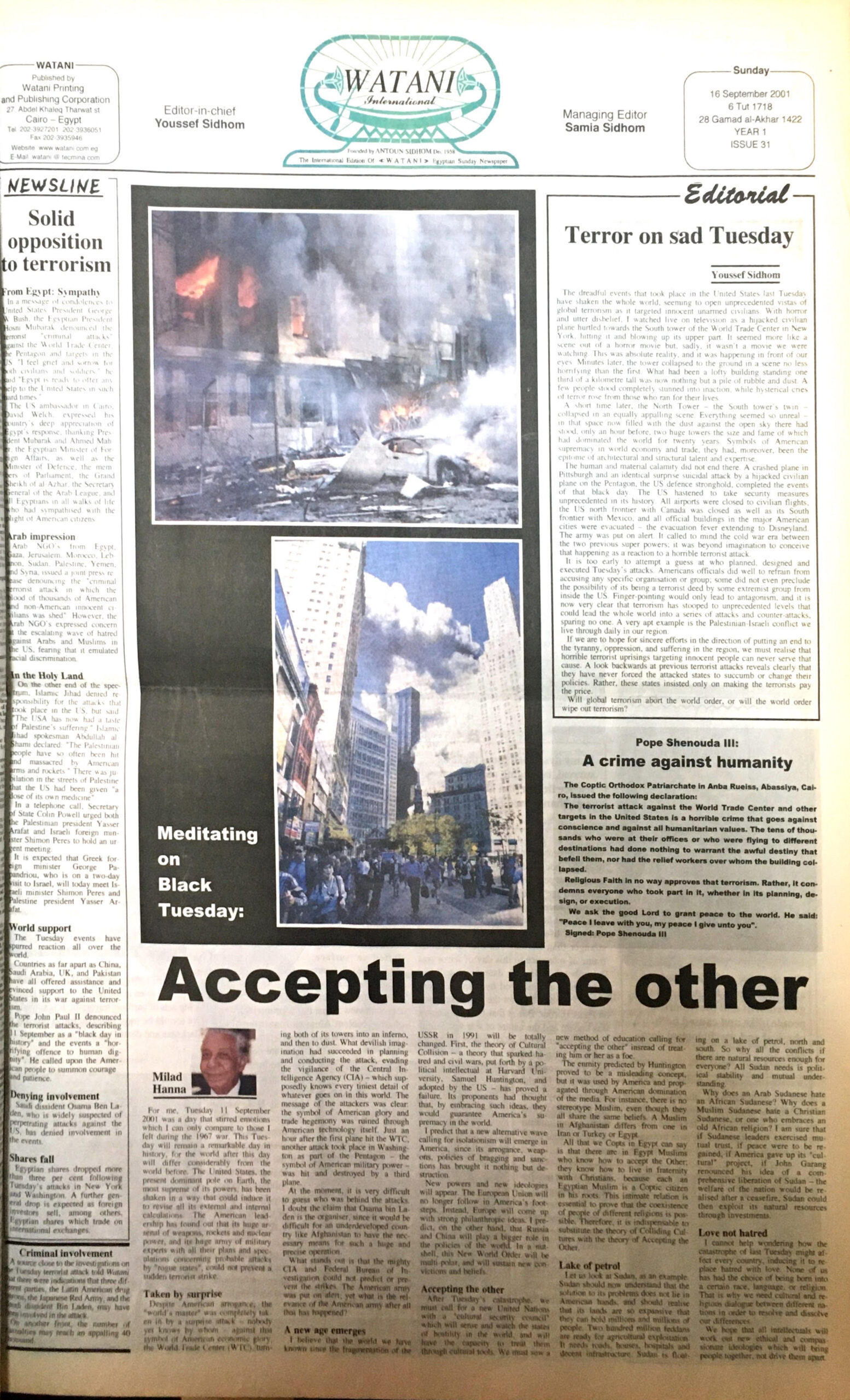 October 2001 brought in two important events: postponement of the opening of the Bibliotheca Alexandrina (BA) in Alexandria on account of the 9/11 incidents a month earlier. The BA is a modern-day version of its famous namesake, the repository of knowledge and forum for culture in ancient times. Watani’s Ekhlas Atalla wrote on the BA, using the title “A new sun rises” which alluded to the design of the modern library as the rising sun. But the BA was not officially opened until a year later in October 2002 by President Hosni Mubarak. 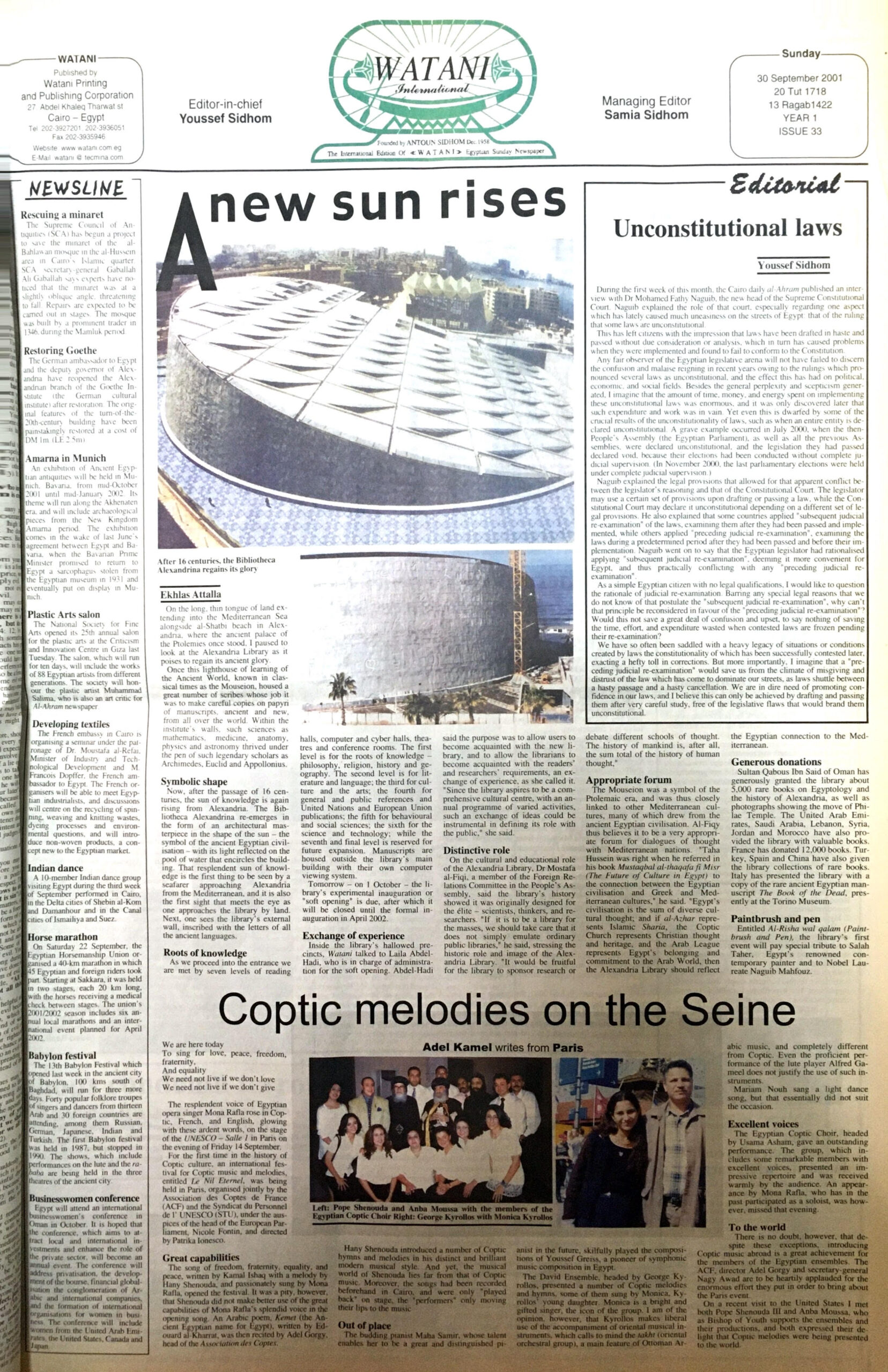 The other October event was a sad one: the passing away of Anba Gregorios, Bishop General of Theology, Coptic Culture, and Scientific Research. Anba Gregorios (1919 – 2001) was an outstanding figure in the Coptic Church, widely respected, loved, and venerated. Watani’s Victor Salama reported on his funeral, and Editor-in-Chief Youssef Sidhom wrote a warm obituary. 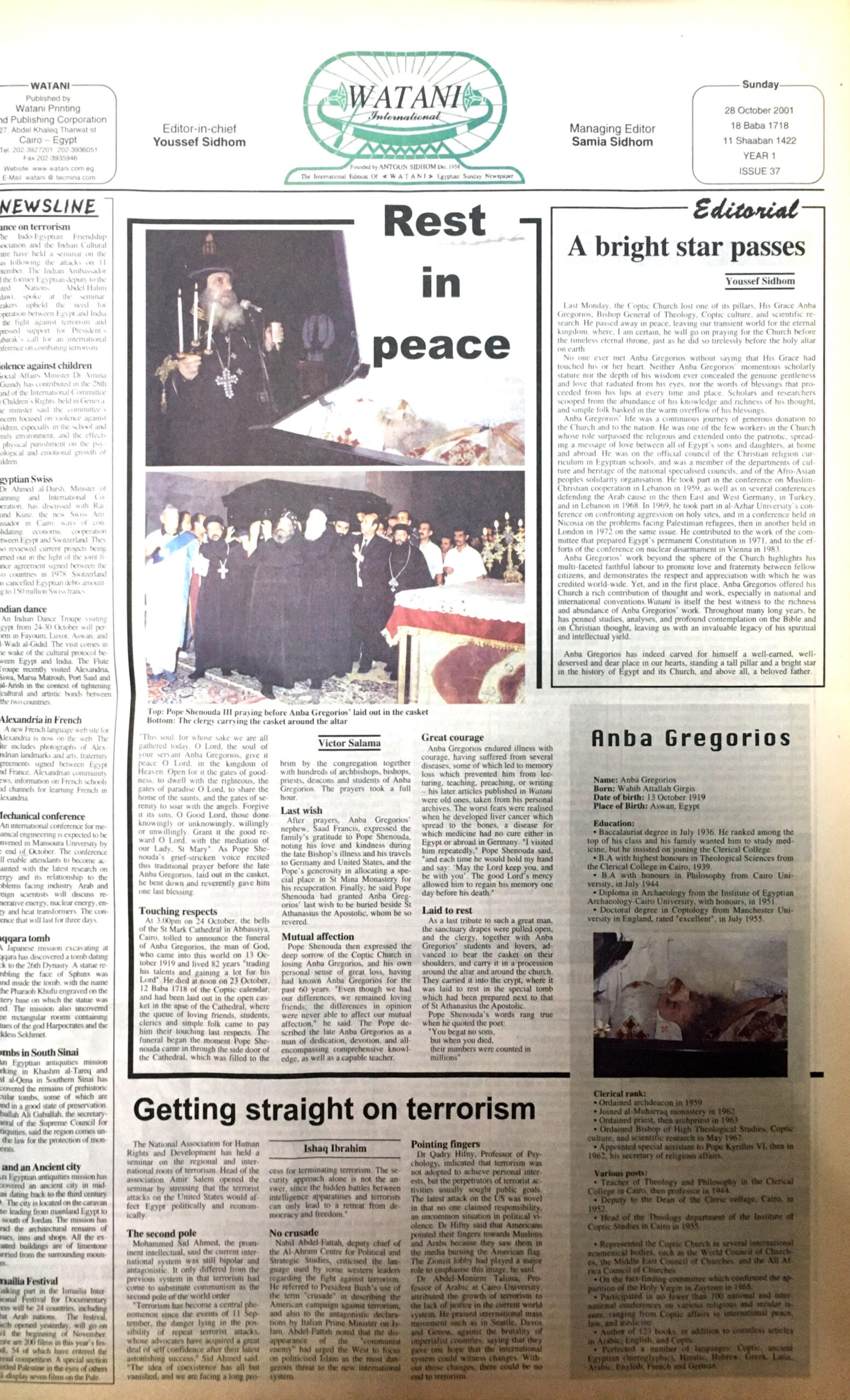 The year 2001 closed on a promising note with the month of December witnessing the first of what was to become a valuable monthly event: Watani Forum. The forum was prepared by Adel Kamel and reported by Sameh Fawzy; it featured Egypt’s most prominent thinkers and activists visiting Watani for a discussion with reporters. The first to be hosted was the philosopher Murad Wahba, famous as father of secular thought in Egypt. The second, hosted in 2002, was feminist Mary Assad (1922 – 2018) who was the first to call attention to FGM as the social ill that needs to be exterminated. The third guest of the Forum was renowned geologist Rushdy Said (1920 – 2013) whose outstanding work of the River Nile is his Magnum Opus.

The year 2002 rolled on with its news and story mix on varied aspects, as well as its special events. Among these was the commemoration of 60 years on the Battle of Alamein which turned the tide of WWII in favour of the Allies, reported in Watani International in October 2002.

Another event was celebrating the centennial of the Egyptian Museum in Tahrir in December 2002, reported by Watani’s Georgette Sadeq and Rania Farid. 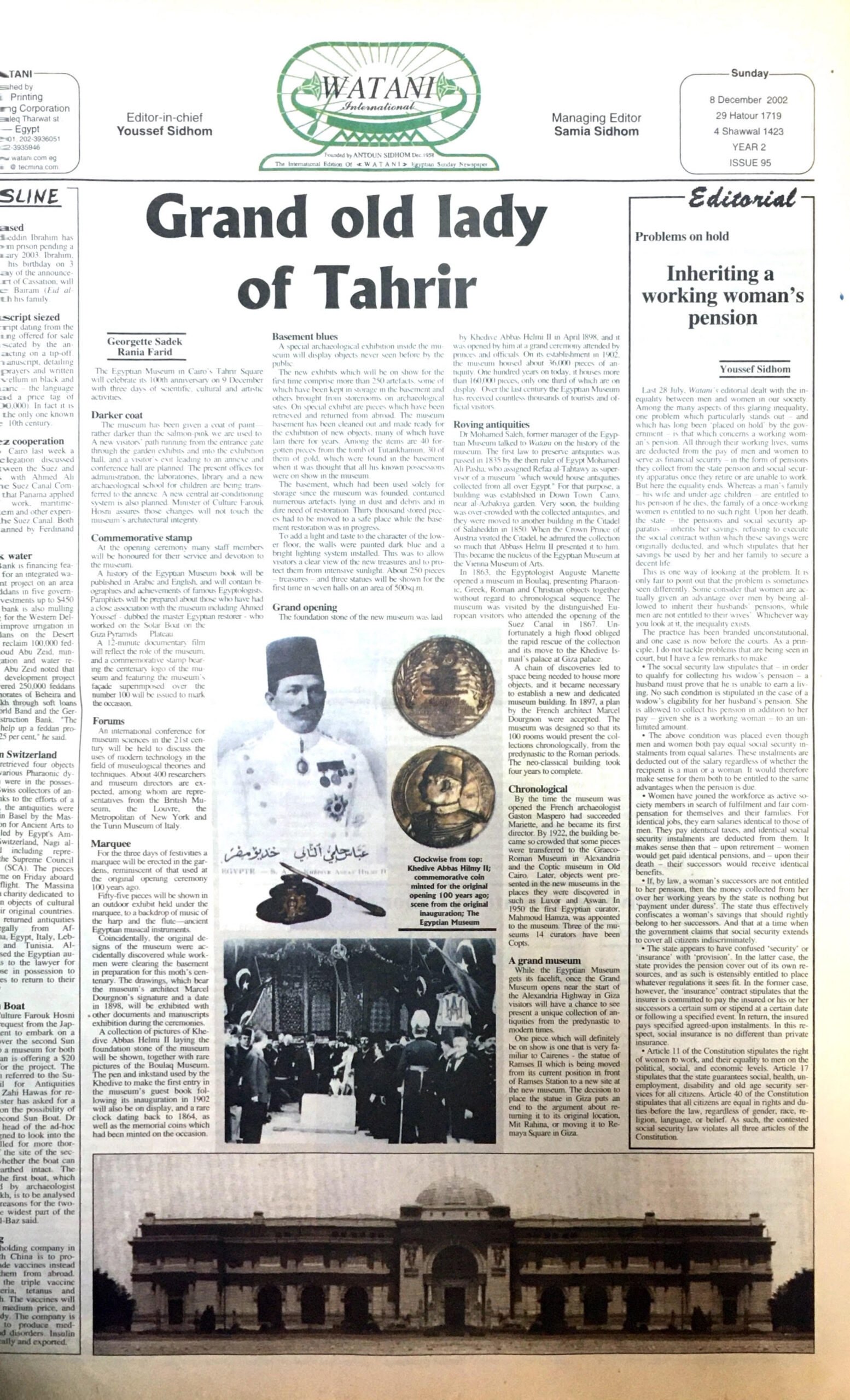 The year ended with an interview with Youssef Sidhom conducted by Laila Farid, contributing editor to Watani International, in which Mr Sidhom spoke of the mission of the paper and the criticism directed at it, saying that the ultimate judge is the reader. There was also the good news that President Mubarak had declared the Coptic Feast of the Nativity (Christmas), 7 January, a national holiday. It was an auspicious decision appreciated by Copts to this day.

Dear reader, it is obvious that the stroll through the pages of Watani International takes us on a journey through history in real time. We thus intend to allocate our page on the first Sunday of every month in 2021 to a quick review of two years of Watani International. That way, we would cover our 20 years of age, reliving historical events and reminiscing on the times be they good or not-so-good; history will be the sole judge on that.