As Watani International celebrates its 20th anniversary year, our first issue having been published on 18 February 2001, we have decided it would be interesting to remind our readers of the most significant content we printed over these 20 years. The idea came from reviewing our 20-year work; it felt like reliving history in real time. So we decided to share it with you, dear readers.

Last month, we went through our first two years, 2001 and 2002, and here we go over the following two years: 2003 and 2004. Throughout the upcoming months we hope to cover in succession the remaining 16 years.

Watani International’s 2003 started with an article I wrote marking our second anniversary, reminiscing about the birth of our English-language paper which coincidentally occurred with the birth of my first granddaughter, and reminding that the paper was geared to the needs of the children and grandchildren of others of my generation who had left Egypt for brighter shores. 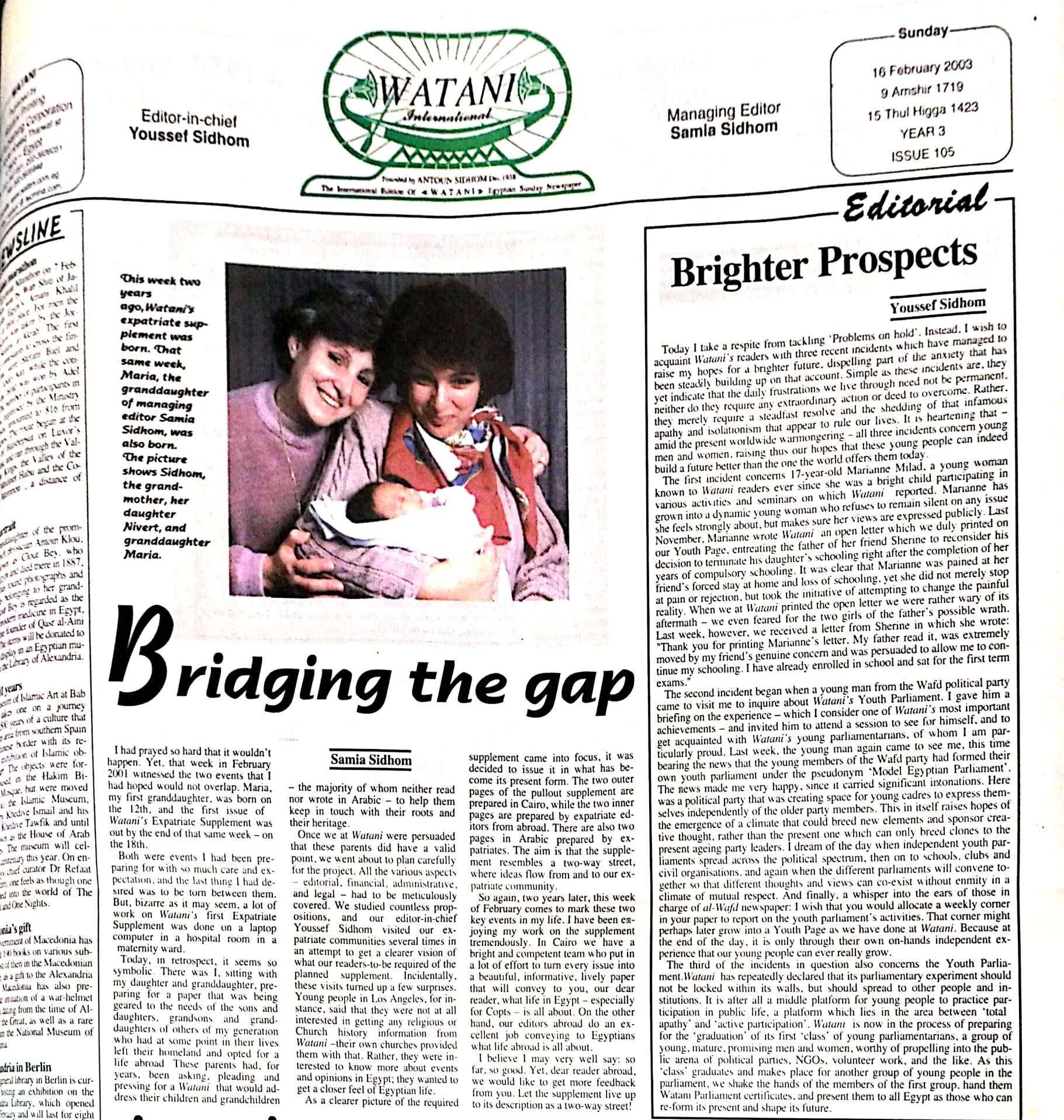 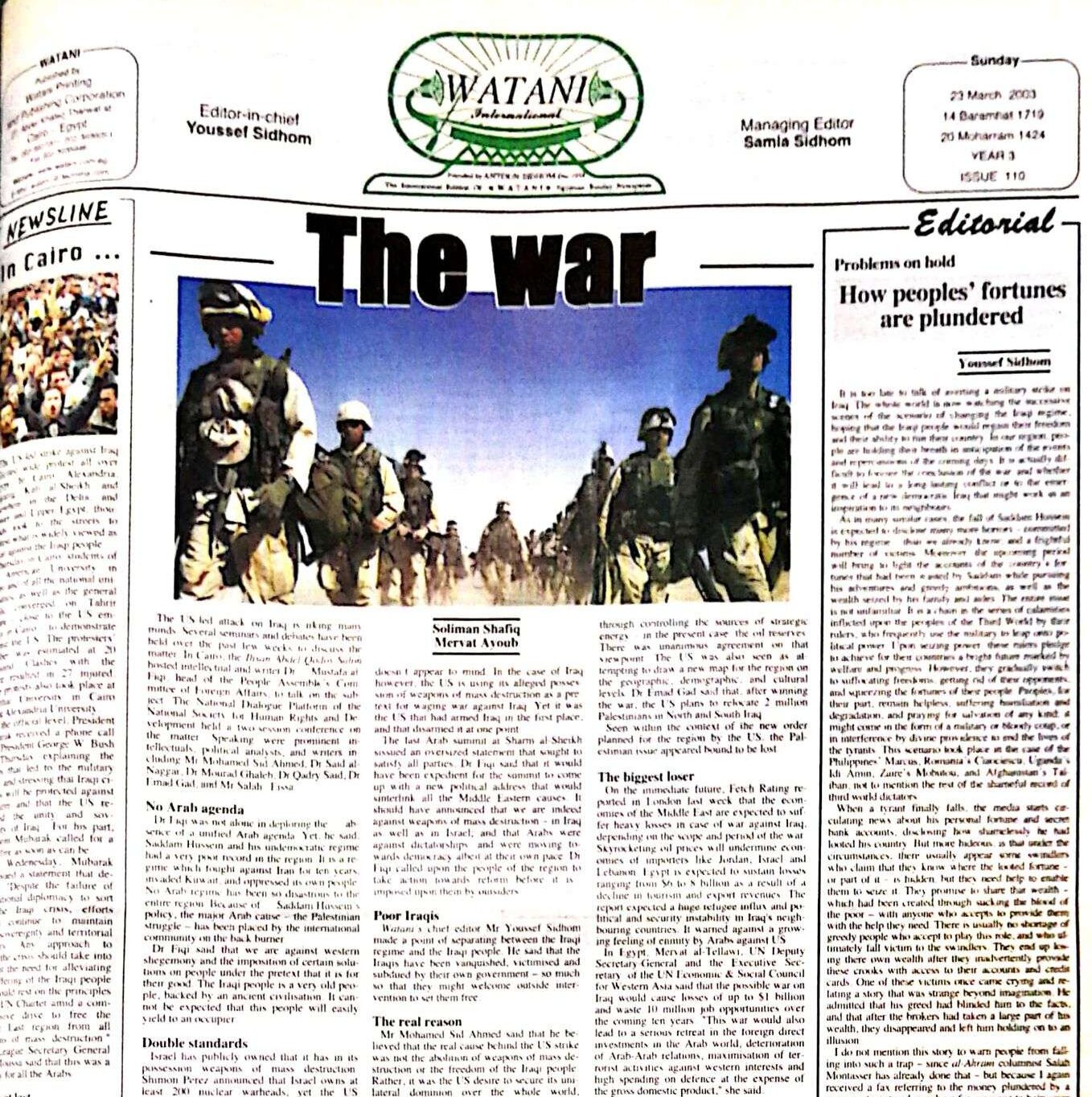 Watani International tackled the Gulf War with a review of Egyptian opinion writers compiled by Soliman Shafiq and Mervat Ayoub, and a discussion of the war by Watani’s Youth Parliament. The young men and women of Watani displayed remarkable knowledgeability and maturity during their lively discussion of the matter; their views are still worth a good read today. That class of Watani’s Youth Parliament graduated in February 2004; their graduation ceremony and a report of the topics they had discussed when in session was covered by Watani International in an informative and interesting story that revealed their real worth and the richness of the Youth Parliament experience. Every one of them went on to pursue a distinguished career, some with Watani and others outside. 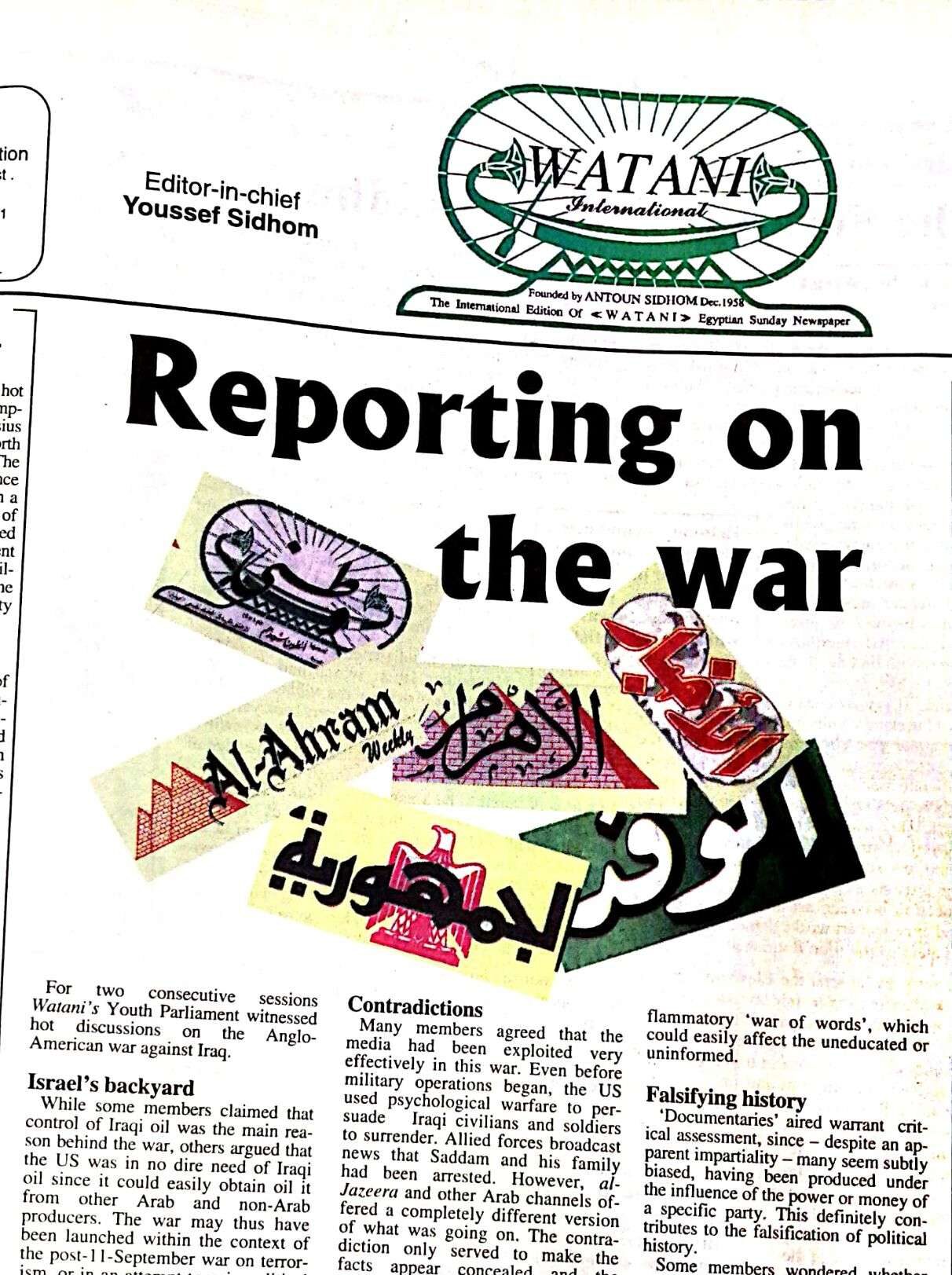 Watani International printed a short analysis by Maged Samir of the incident of the terror bombing in Taba which targeted Israeli tourists. As expected, the bombing brought on years of tourism woes. 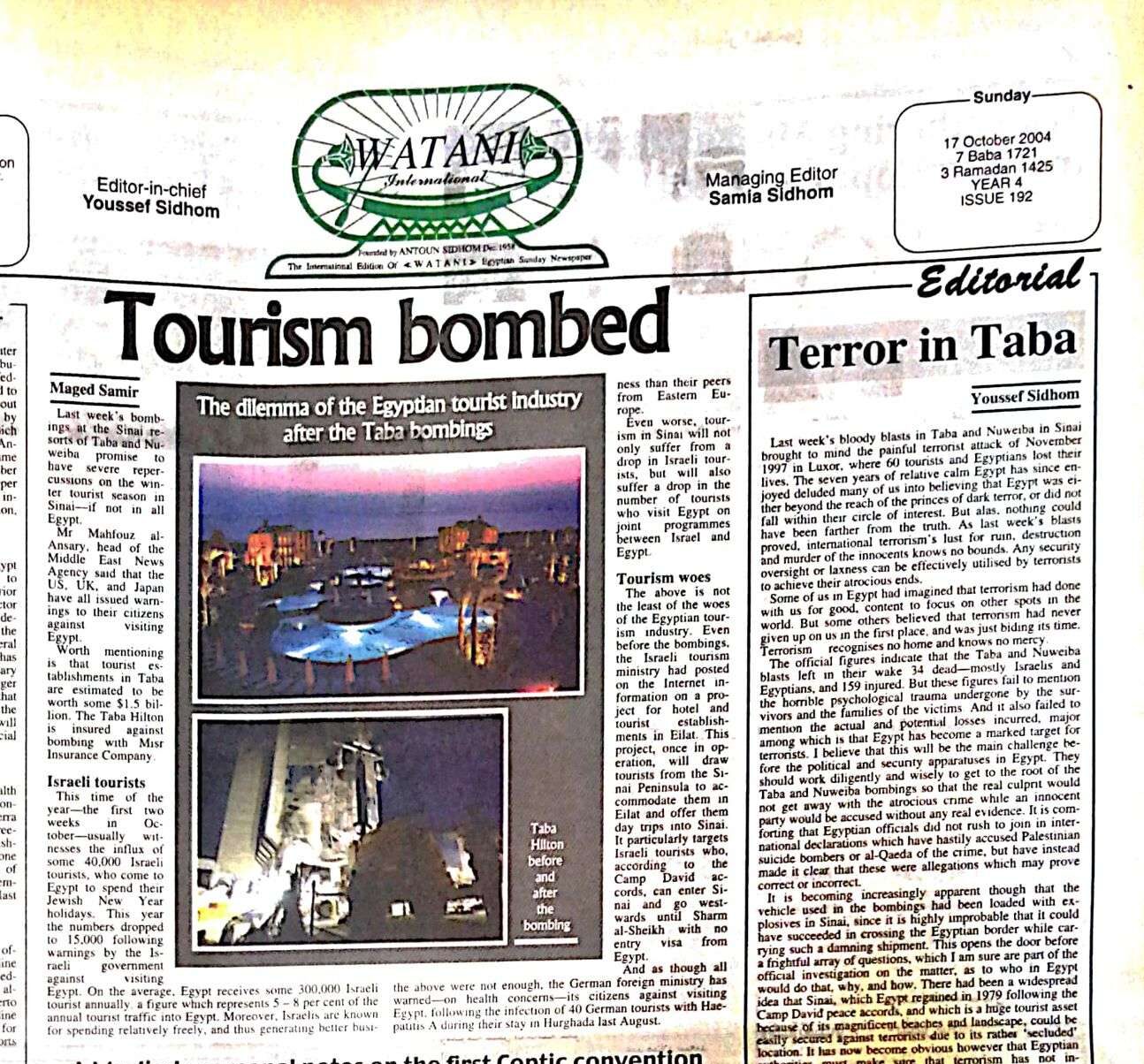 Also in October 2004, Watani International offered extensive reporting on the first Coptic Symposium held in Zurich under sponsorship of Adly Abadir Youssef (1920 – 2009), a prominent businessman and Coptic activist. Watani’s Editor-in-Chief Youssef Sidhom participated in the symposium with a paper on Watani throughout 46 years, mirroring the situation of the Copts in Egypt during these changing times. Mr Sidhom wrote about the discussions and resolutions of the Symposium which had been branded by Egyptian papers as ‘Zionist’. He put in the facts, leaving it to the reader to see that the allegation was in no way true. Opinion writer Nabil Sharafeddin wrote under the title Tales from Najaa al-Nassaara refuting that claim, recalling fond memories of Coptic friends and citing endearing moments at the symposium. 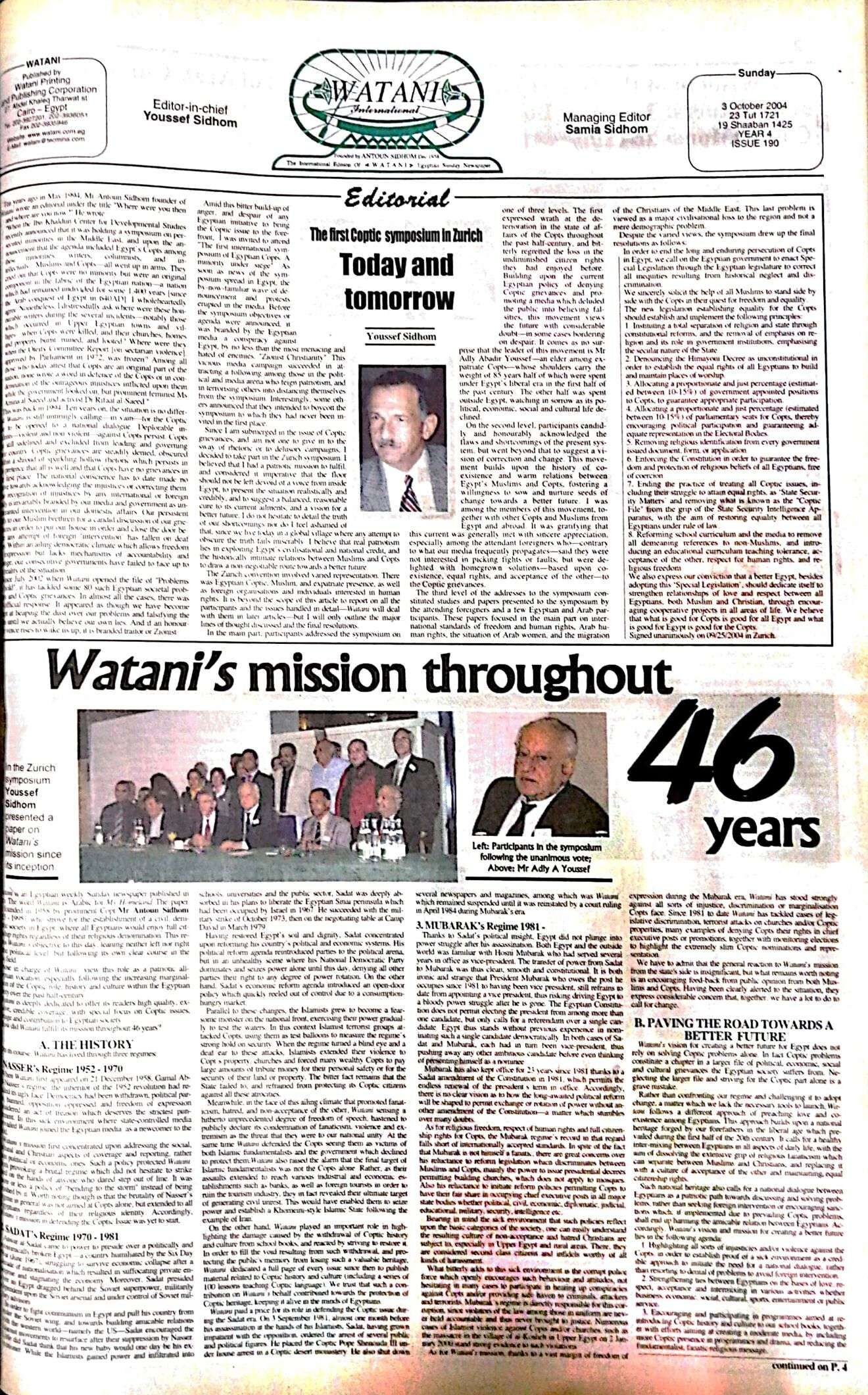 Again in October 2004, Victor Salama wrote in Watani International about Coptic protests over a number of incidents of discrimination against them and official intransigence against their church building or restoration, especially in Assiut and Minya in Upper Egypt. Incidentally, 2016 saw the first ever law finally passed to govern and ease the building and restoration of churches. In the same issue, Nader Shukry wrote about the incident of Wafaa’ Costantin, a priest’s wife who went missing from her home owing to disputes with her husband. The media alleged she had converted to Islam, but the woman stood before the prosecution to claim she had been “born Christian and will die a Christian”. The incident had shaken the Coptic community which feared Ms Costantin had been abducted or pressured into conversion. 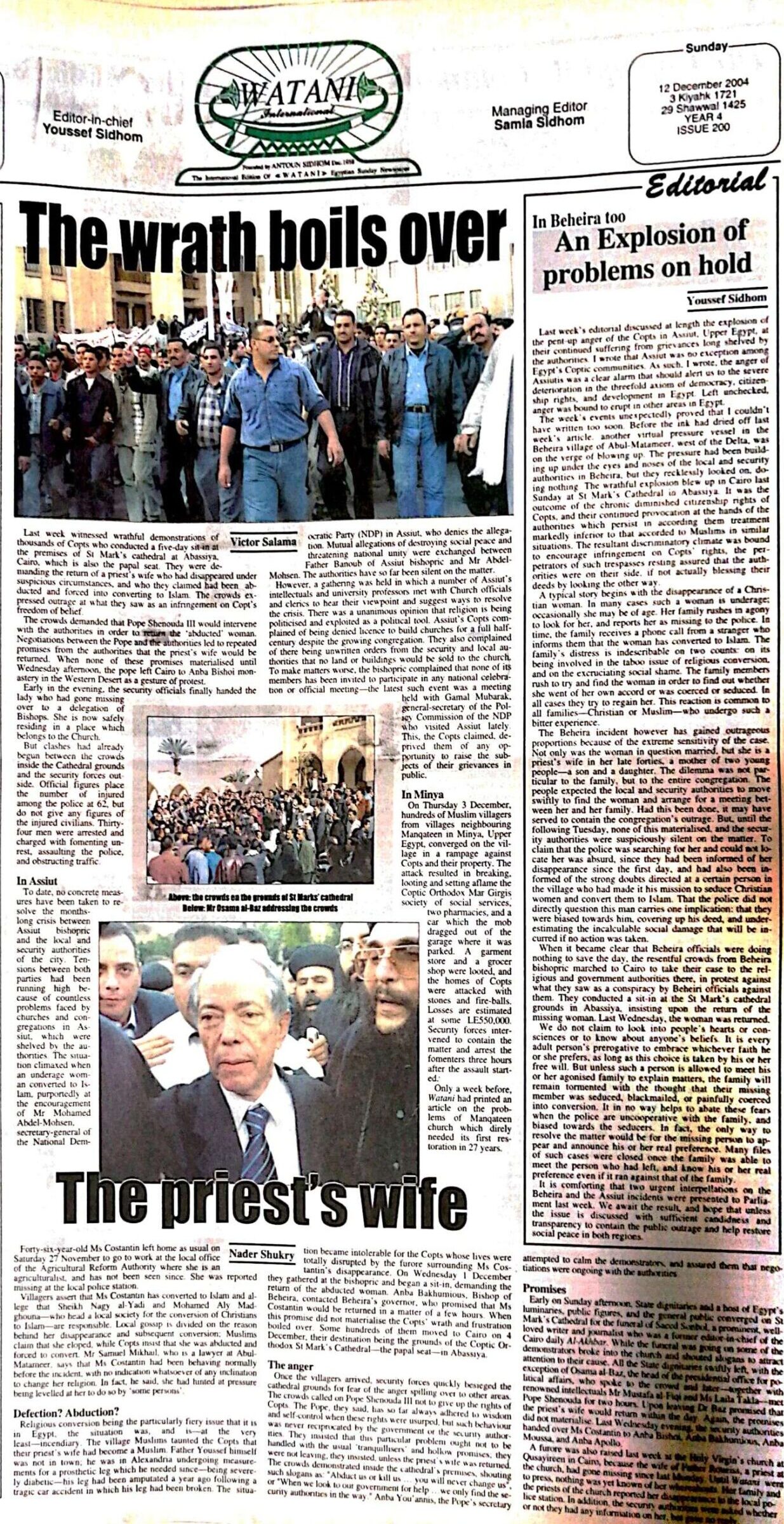 During 2003 and 2004, Watani International printed a number of stories on Coptic culture and events inside and outside Egypt.

Under the title Faith in action, Nivert Rizkallah wrote a story on the Coptic pilgrimage twice a year to Kom Maria near the village of Deir Abu-Hinnis In Mallawi, Minya. The Bishop of Mallawi, joined by priests and deacons, boards a felucca and crosses the Nile to the village on the east bank of the Nile, and further to the hill of Kom Maria to celebrate the Holy Family which had spent a day there while on their flight to Egypt from the face of Herod the King. 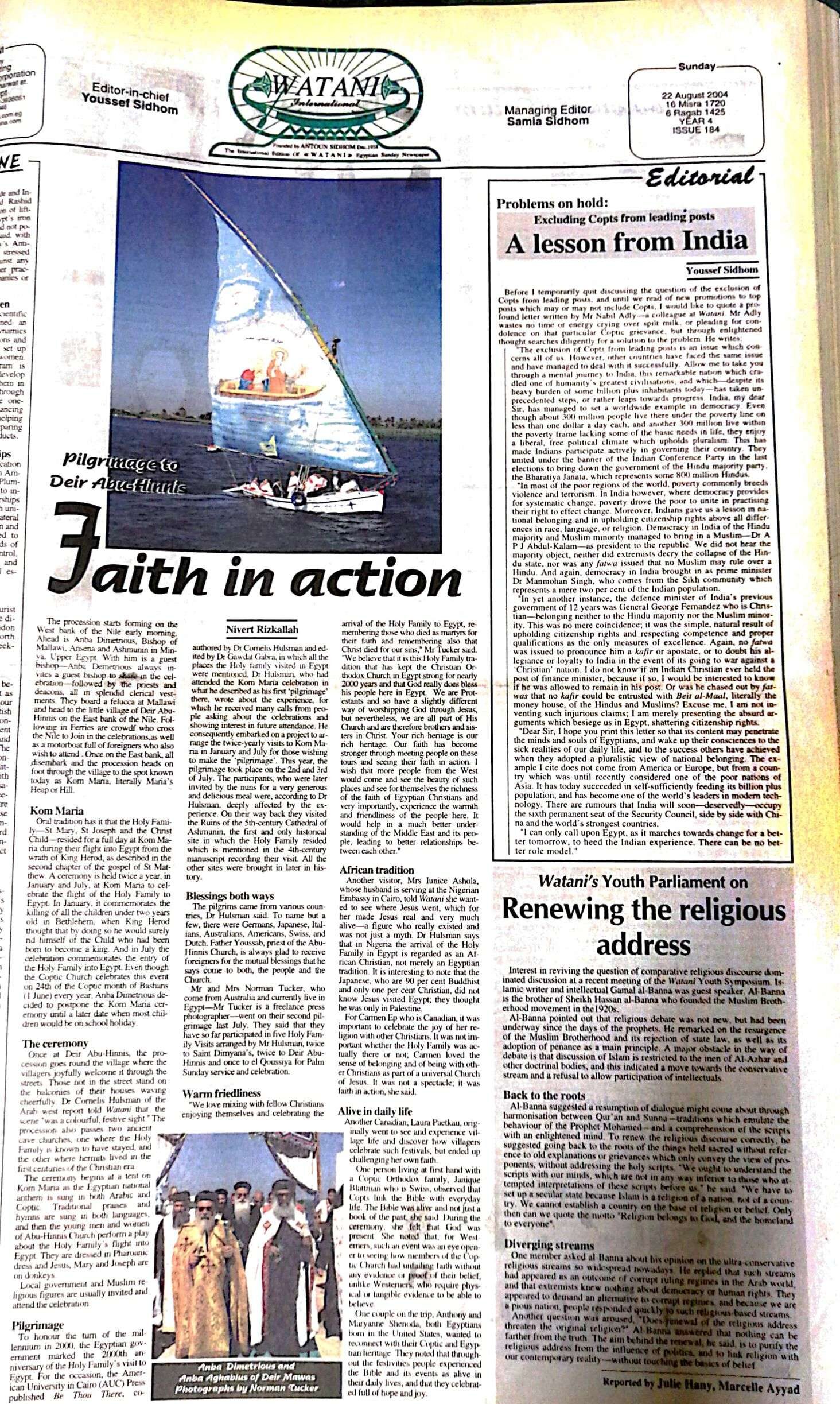 Also from Mallawi, Theresa Kamal wrote Conversing in Coptic about the remarkable efforts of Anba Demetrius, Bishop of Mallawi, to revive the use of the Coptic language. And on the academic level, Mary Fikry wrote under the title Copts on the curriculum on the first Coptic Chair in an Egyptian university, established by the American University in Cairo. 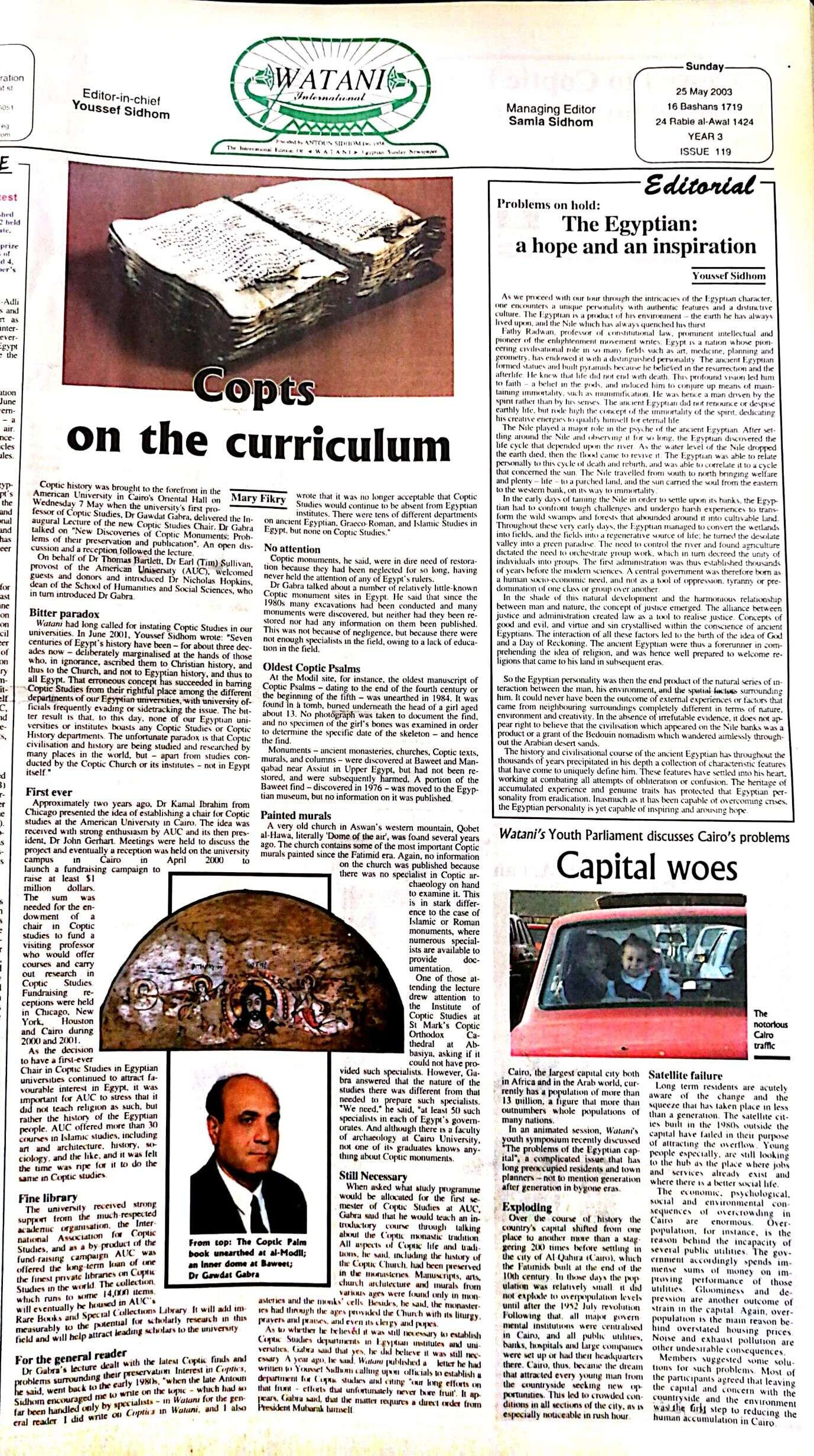 Coptic to the core was how Watani International described the great Egyptologist and Coptologist Pahor Labib (1905 – 1994) in a story about him published on 18 May 2003. 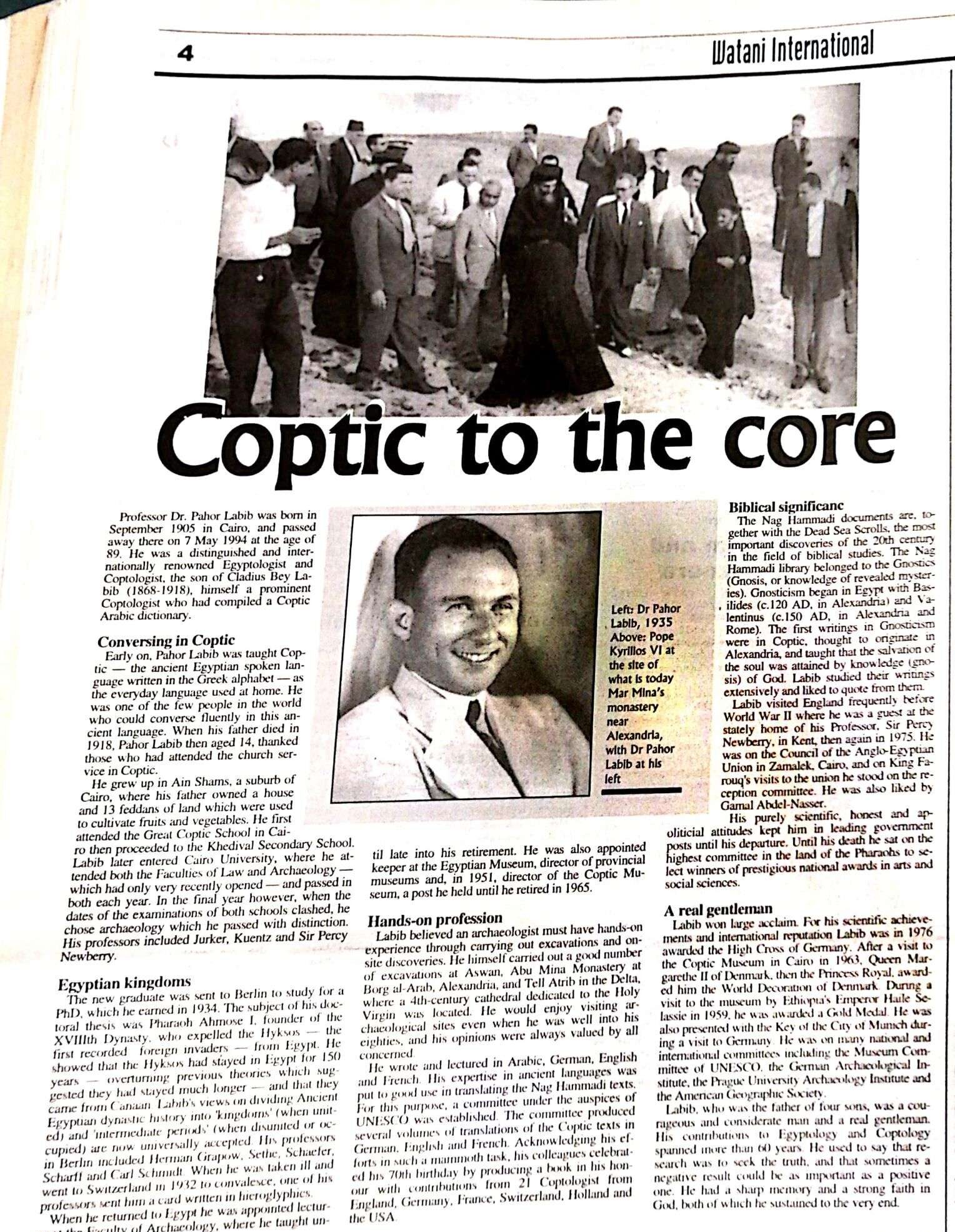 Coptic Islamic art, a feature by Sobhy Abdel-Malak, explored the Coptic roots of Islamic art as was given in a 1937 lecture by Dr Zaky Mohamed Hassan at the National Geographic hall in Cairo. The article in Watani International carried a collection of extremely attractive pictures.

On 22 June 2003, Mina Badie Abdel-Malek reminisced about the unforgettable memories of the arrival of the relics of St Mark to Egypt on 24 June 1968. He rightly titled his article St Mark’s homecoming. 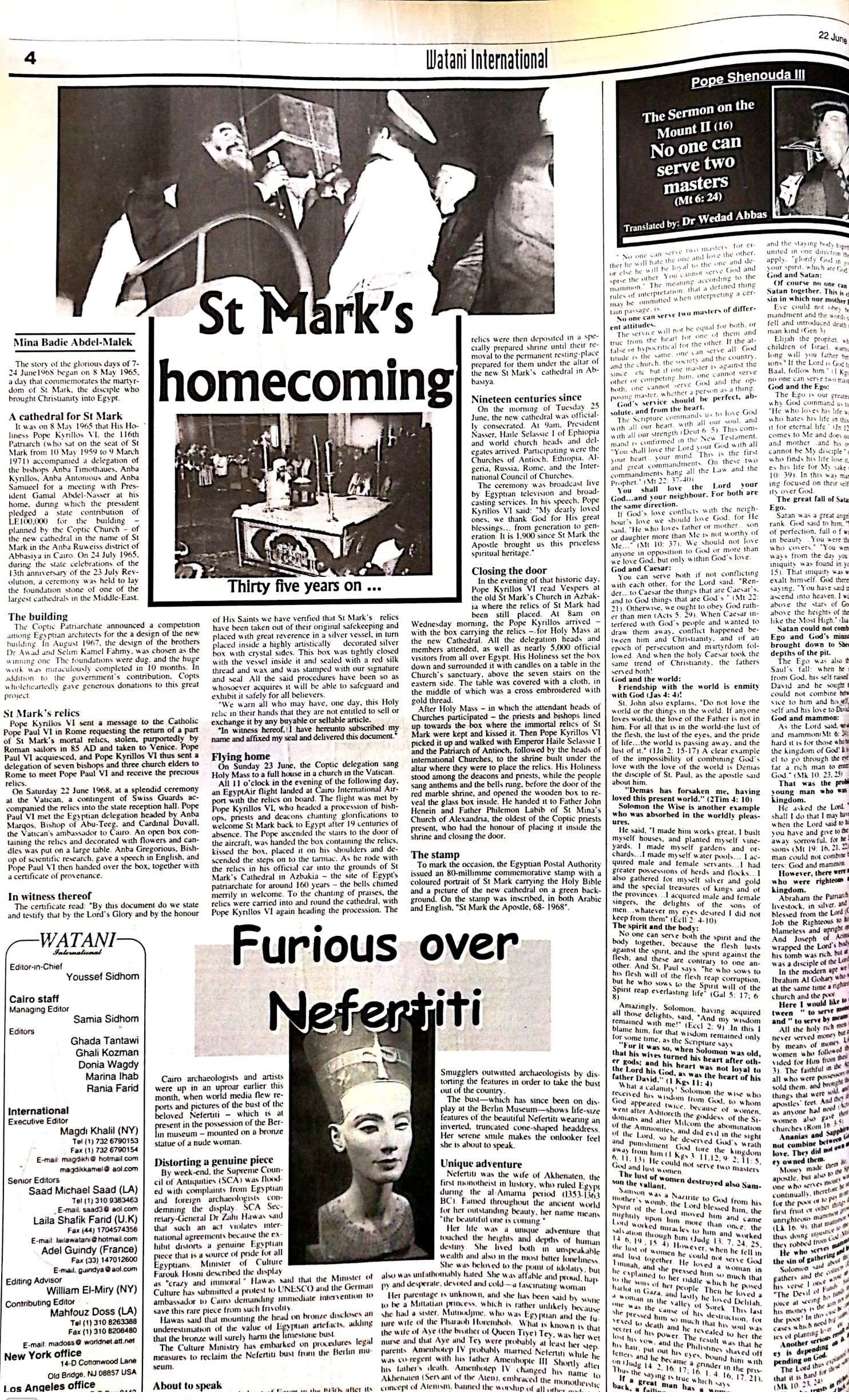 The environment was a topic of significance even as far back as 2003. Georgette Sadeq reported on Egypt’s first park, Ras Mohamed in Sinai on 2 March 2003; and, jointly with Robeir al-Faris, on Our threatened wetlands on 15 June 2003. 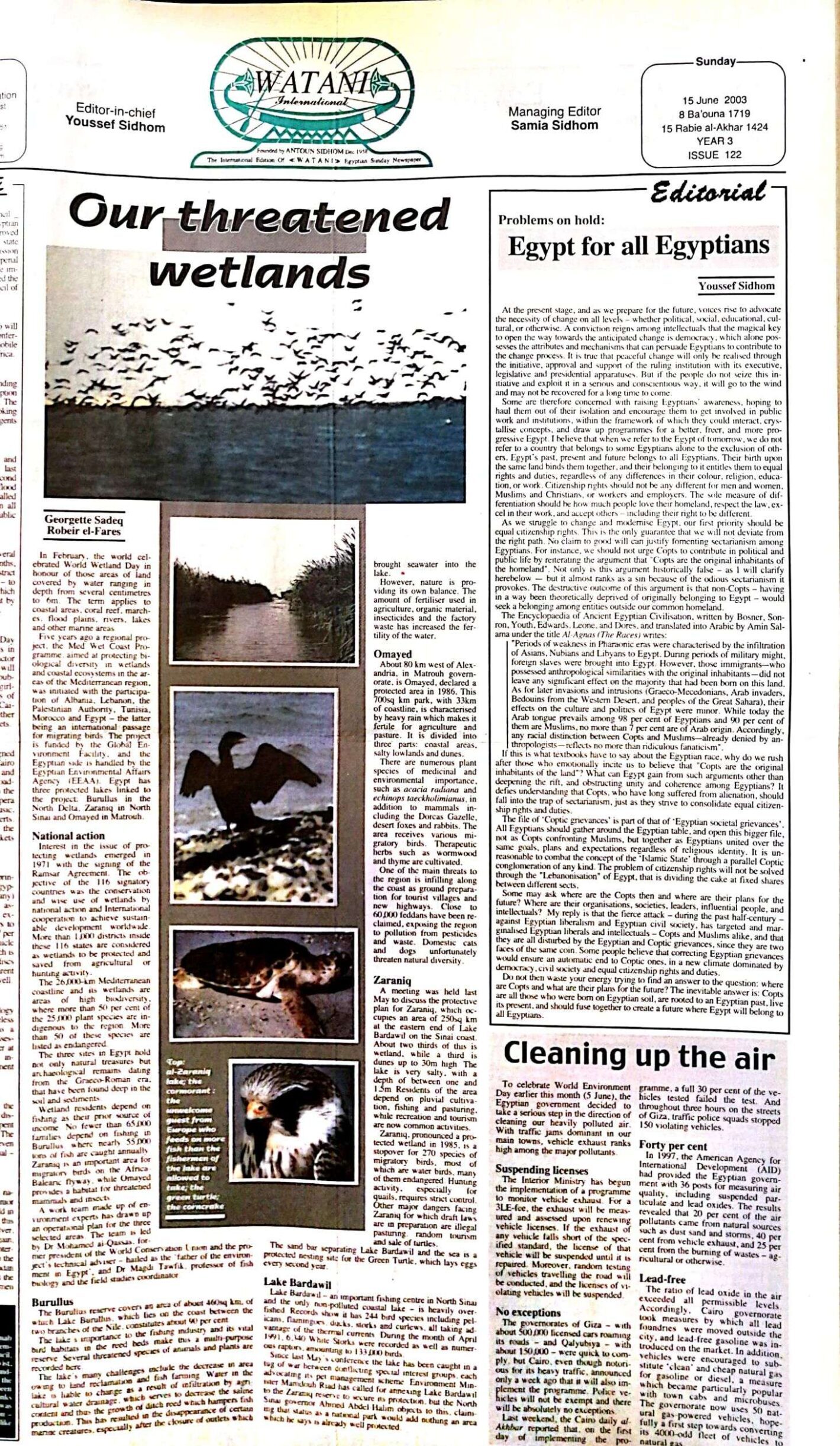 Women issues have always featured highly in Watani and its international issues. In 2003, Tahany al-Gibali was appointed to Egypt’s Constitutional Court, the first woman to sit as judge in Egypt. Nadia Barsoum wrote about the raging controversy of the fitness of women to judge in normal courts, a controversy that was only resolved a few weeks ago on directives by President Sisi, based on the Egyptian Constitution, to appoint women judges on the State Council, Egypt’s highest administrative court.

The year 2003 had been declared by Ms Suzanne Mubarak “Year of the Egyptian Girl”. The topic was tackled in Watani International by Nadia Barsoum under the title Worth a 100 men. The ever-present issue of female circumcision (FGM) was explored by Ms Barsoum in her Not by law alone in June 2003 and The little village that could in February 2004 about the village of Deir al-Barsha in Minya where the [entirely Coptic] population signed a document banning FGM. 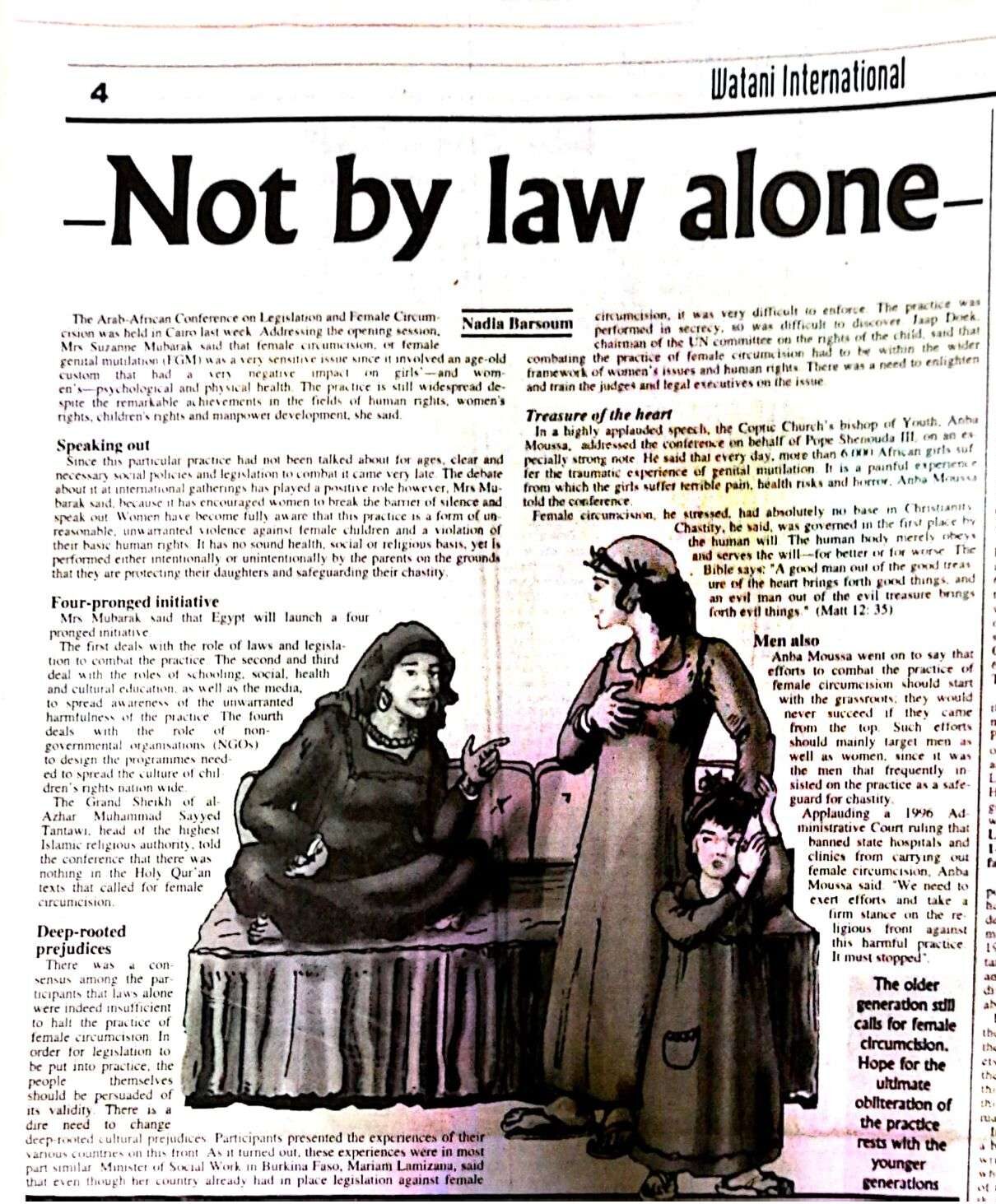 Watani International’s 2003 and 2004 issues brimmed with stories on the cultural scene in Egypt; to cite but a few: Magdy Samaan’s Dancing statues on modern dance theatre, Mary Fikry’s Carefully made by hand on handmade textiles; Samira al-Mazahy’s Opera in Alexandria on the opening of the newly restored Sayed Darwish Theatre in Alexandria as an opera house; and Tharwat Fathy’s Illustrated press.

Museums and antiquities featured in our 2003 and 2004 issues, with Maged Samir and Lillian Nabil reporting on Sunken treasures in Abu-Qir Bay; Donia Wagdy and Marina Ihab on the Nubia Museum in Aswan Daughter of the Sun; and Georgette Sadeq on the restored Abdin Palace opens its doors. 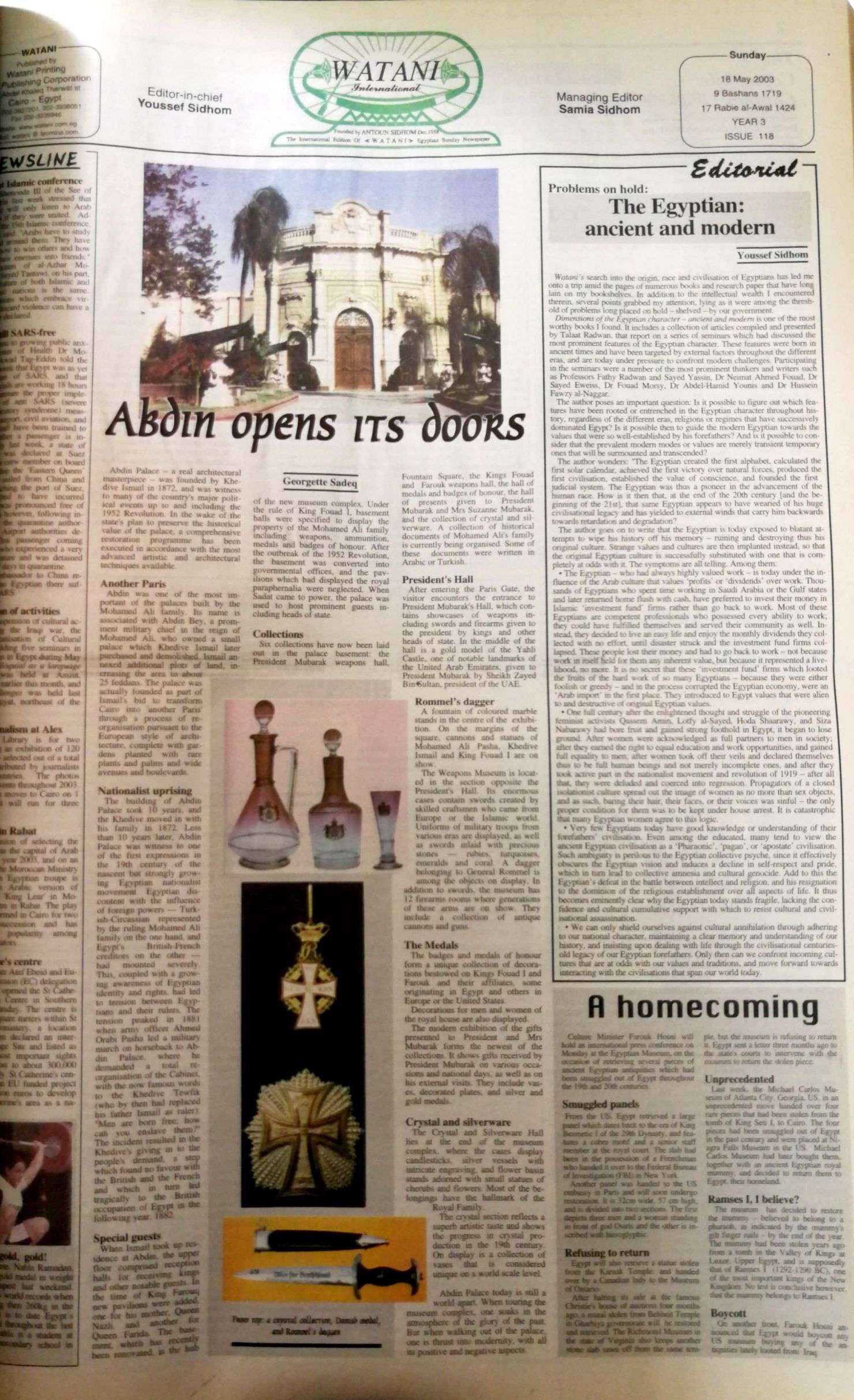 There was also a report on The winning design by Dublin’s Heneghan Peng Architects for the Grand Egyptian Museum which is scheduled to open in 2022. 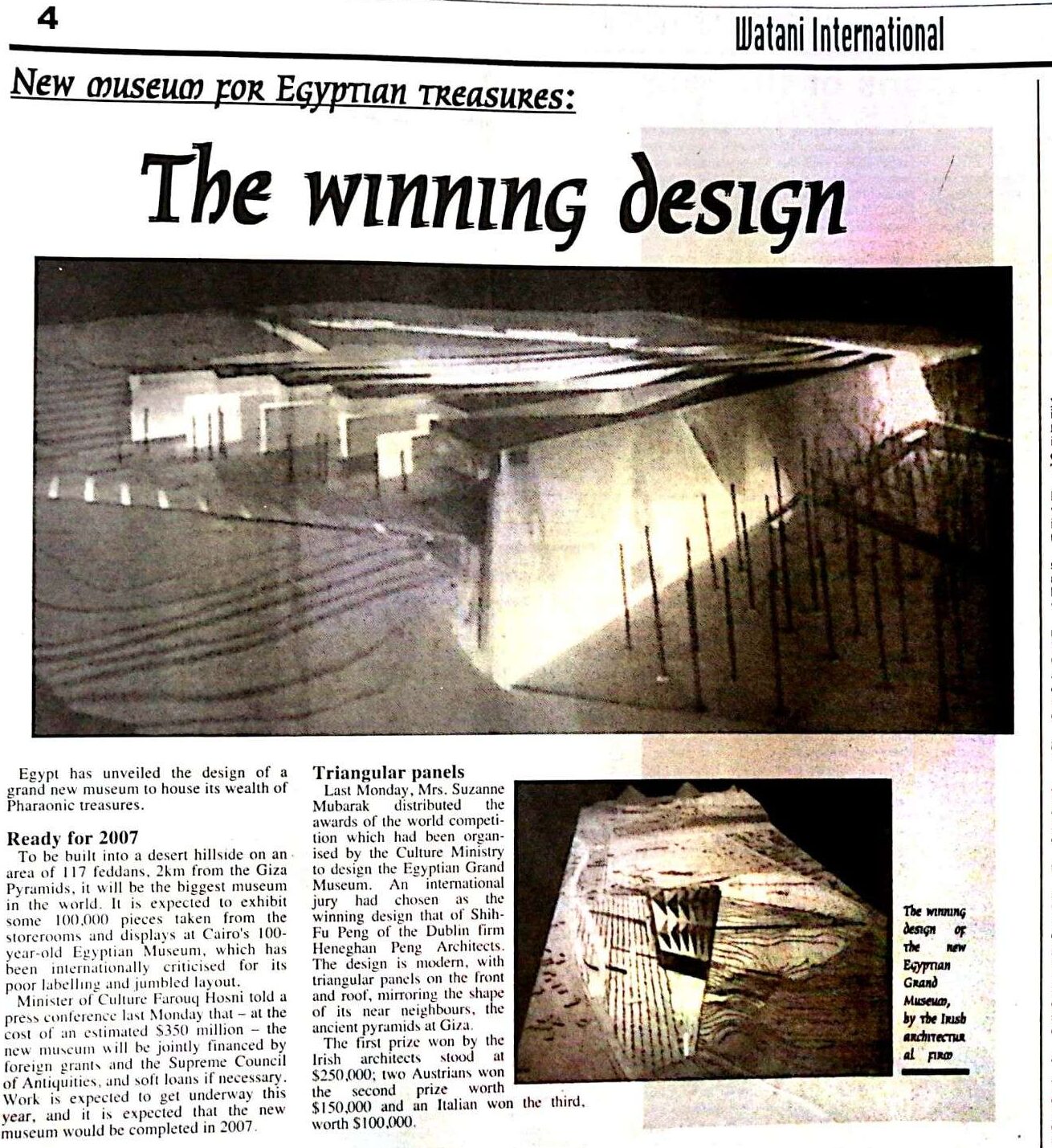 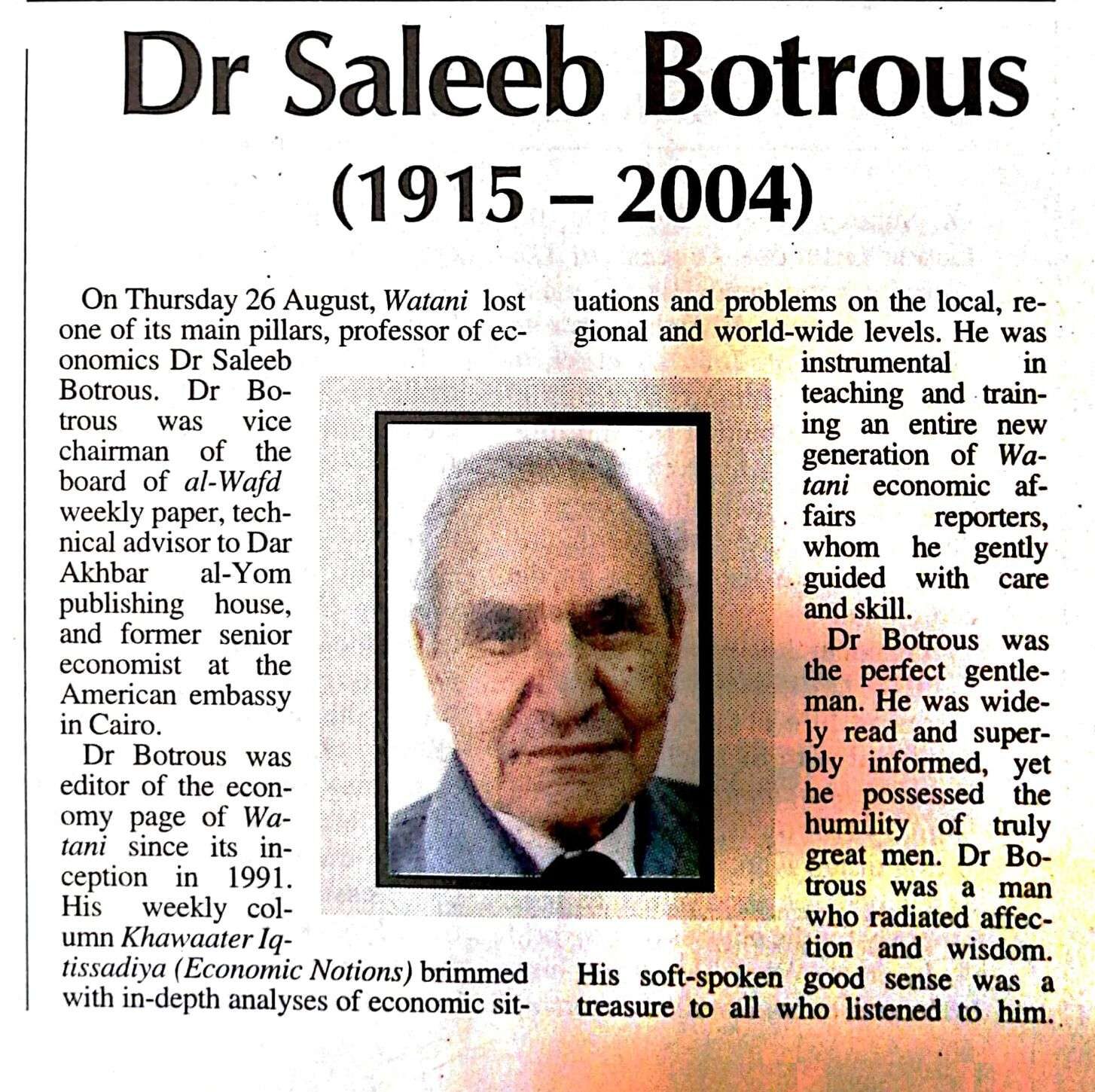 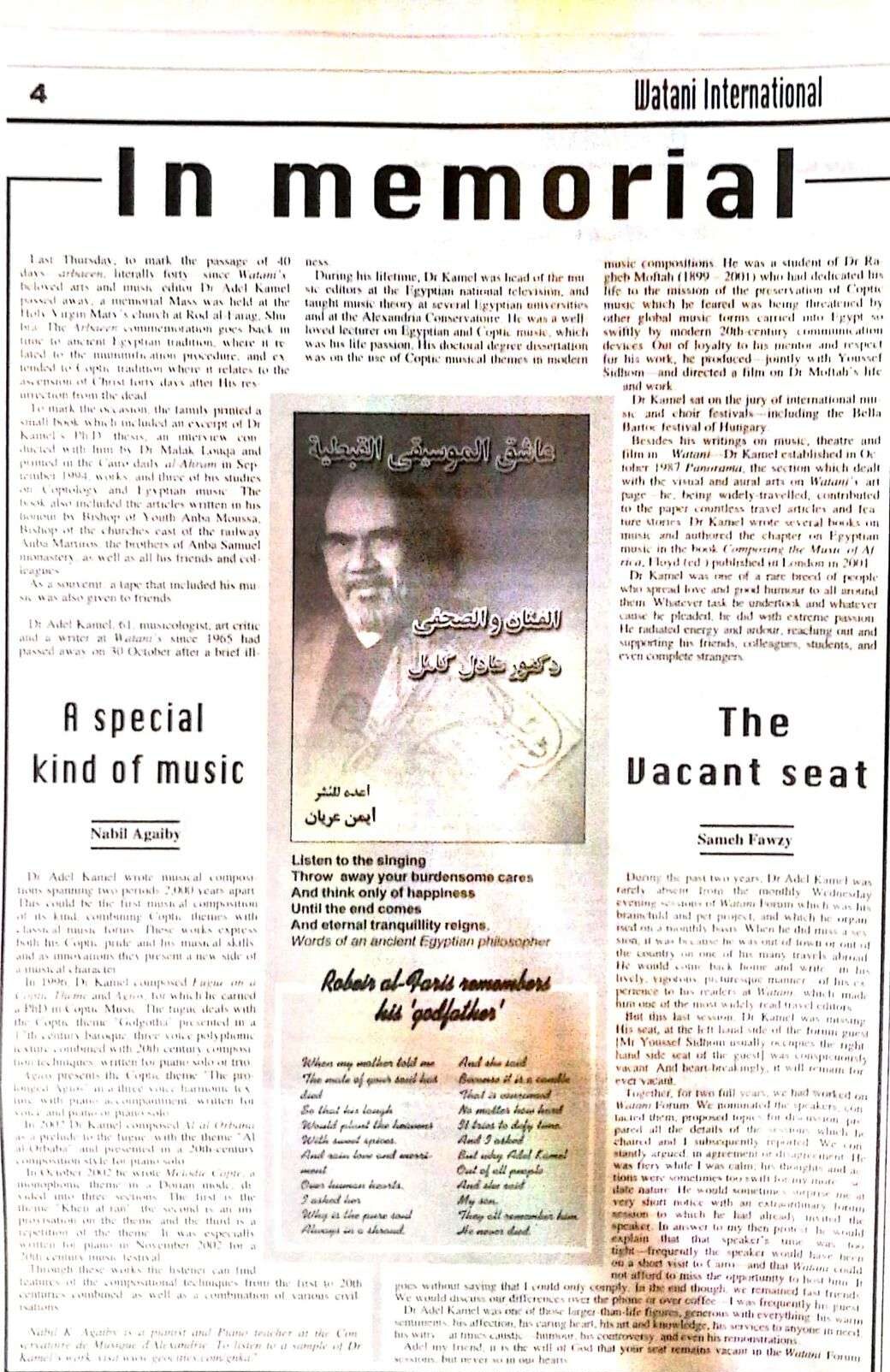