With Watani International this year marking 20 years on its first issue, we promised to treat our readers to reviews of our issues throughout these years. We already printed reviews of the years 2001 through 2004; today we resume that effort and look at the 2005 and 2006 pages of Watani International. The reviews read like history in real time.

A few trends stood out in 2005 / 2006. One was the move towards political reform in Egypt in tandem with wider freedom of expression.

Watani Forum discussed the political movement “Kifaya”, literally “Enough”, which called for political reform  and had gained a foothold in the Egyptian street despite strong suspicions of foreign funding (Sameh Fawzy, 8 May 2005). 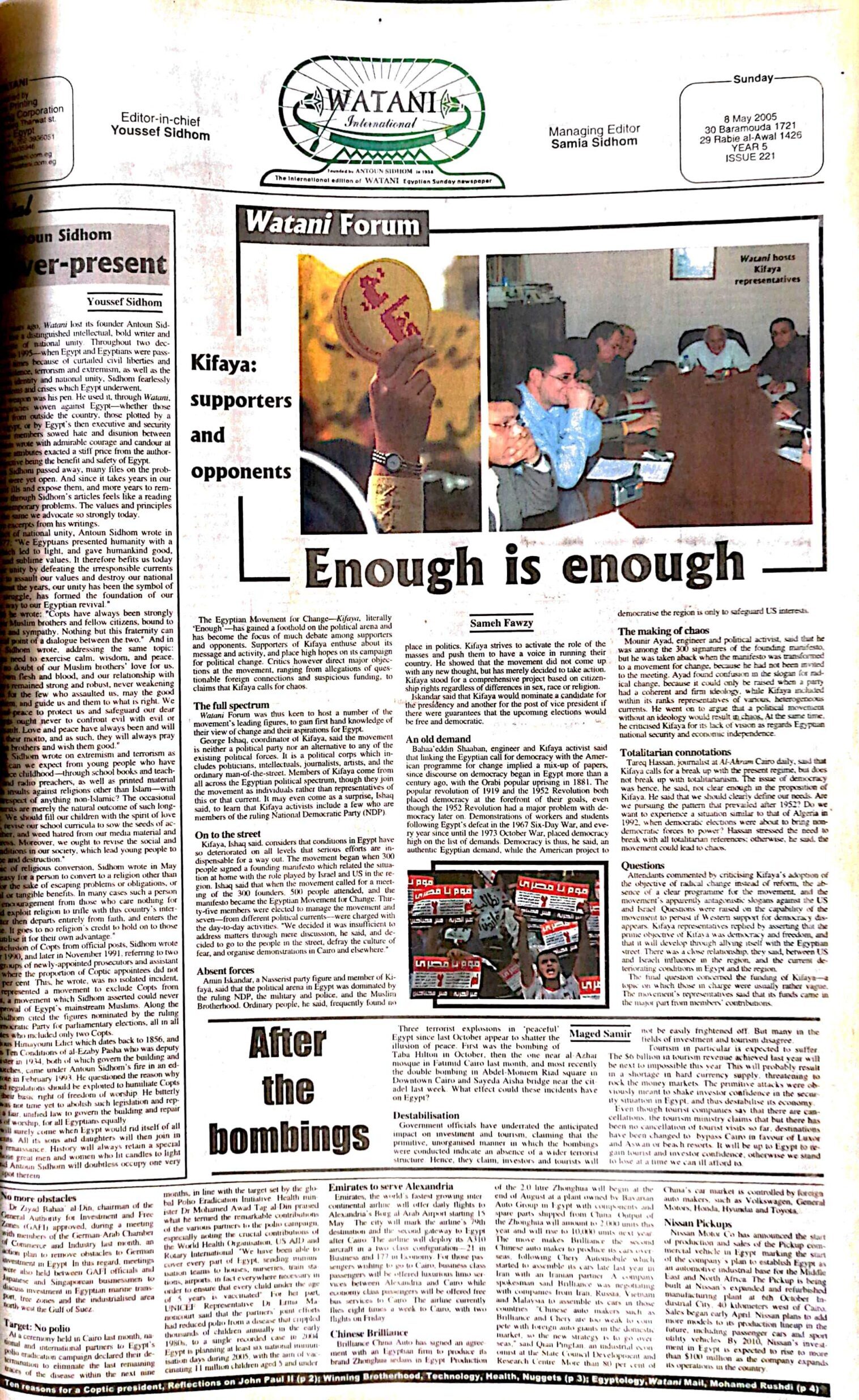 The Constitution was amended to allow for multiple candidate elections to replace the system of a single candidate nominated by parliament and voted in by public referendum. (Magdy Malak, 15 May 2005). Hosny Mubarak became the first president to be elected that way (Watani reporters, 11 September 2005). 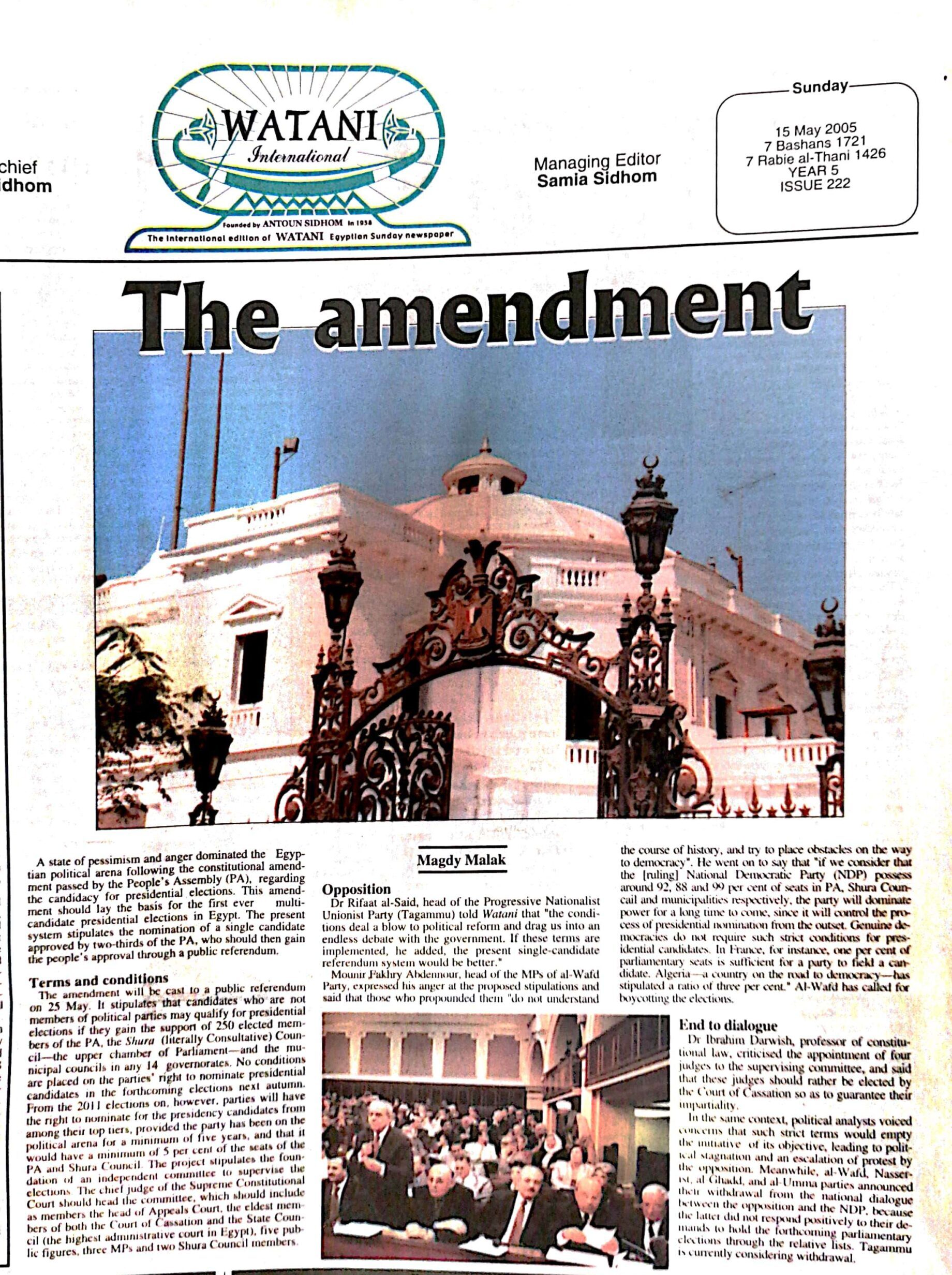 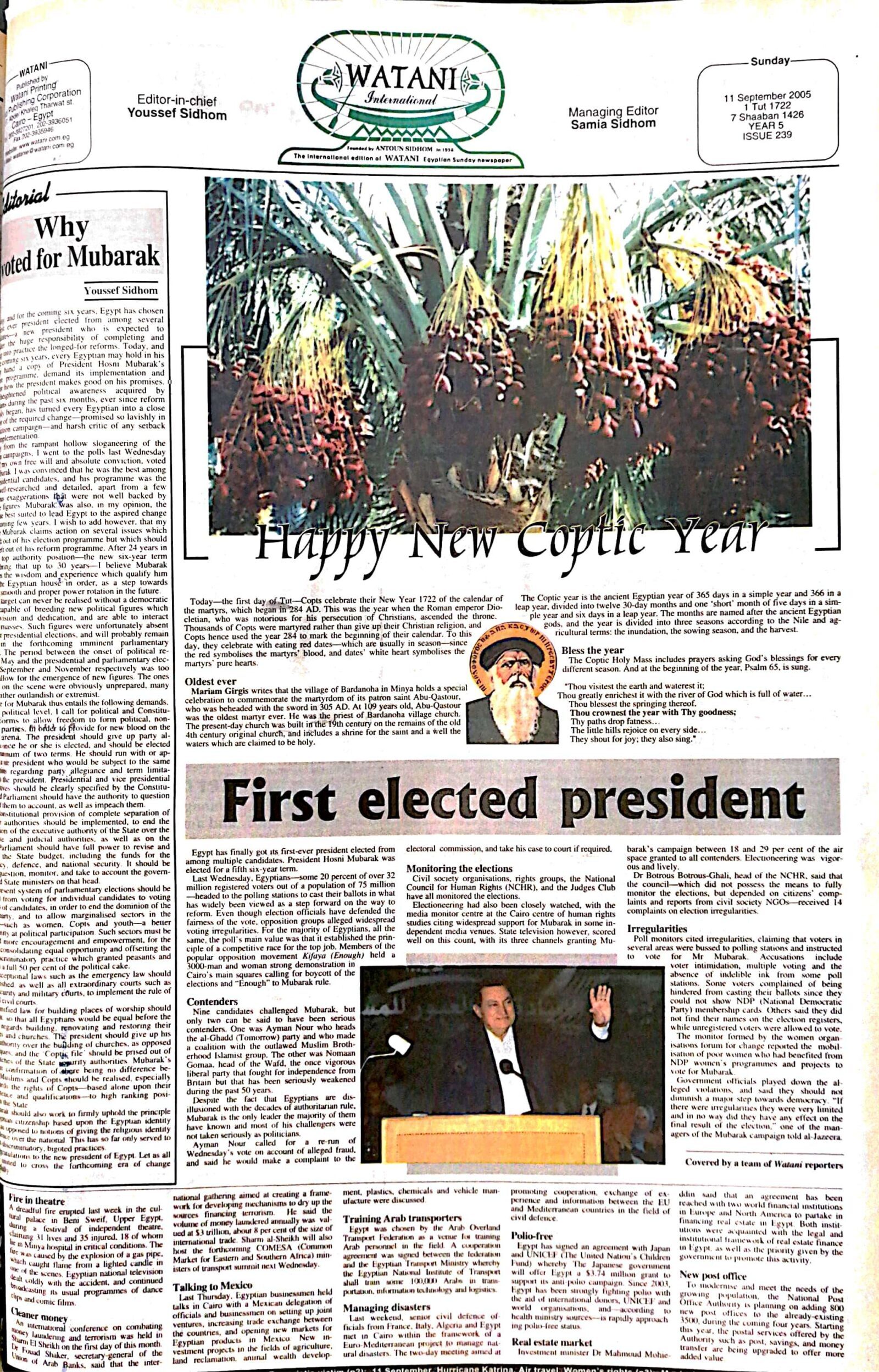 For many observers, however, the rise of political Islamic movements in Arab parliaments—in Egypt the Muslim Brothers (MB) occupied 20 per cent of the seats—was a cause for worry. The MB promised people prosperity on the wings of piety, and offered what looked as a viable alternative for non-democratic regimes (Hany Danial, 10 December 2006). Incidentally, they did ride the wave of the “Arab Spring” in 2011, and rose to power in 2012, only for Egyptians to see their real face of tyrannical fundamentalism and to topple them through the mass revolution a year later on 30 June 2013. Today Egypt is a secular State.

Watani International also reported on journalists demanding more freedom for the press. They called for cancelling laws that allowed imprisonment of journalists in case of certain offences, and required better access to information (Maged Samir, Iman Hanna, 14 May 2006). 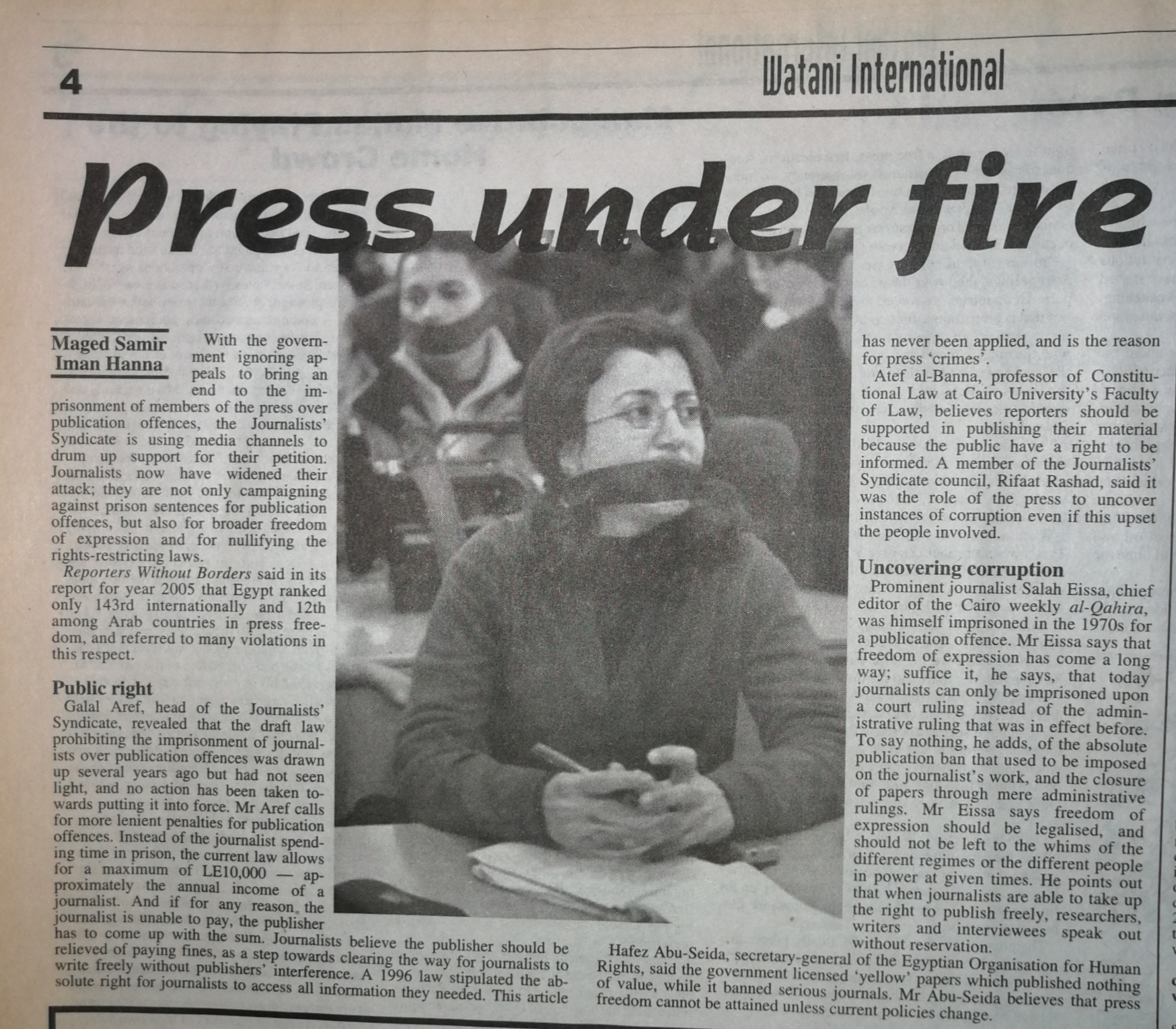 Corruption and poor management in hospitals featured in two stories printed by  Watani International, one on the children’s hospital of Abul-Reesh, and the other on the Rabies hospital (Mervat Ayoub, 10 April 2005; 6 November 2005).

The sectarian arena saw an escalation of attacks against Copts and curtailment of their rights in 2005 and 2006. On 23 and 30 January 2005, Youssef Sidhom wrote editorials on the discrimination against Copts regarding building places of worship. He wrote that even though President Mubarak had in 1998 moved the approval of restoring and renovating churches from the President to the governors and local building authorities, this did not ease the process in any way since practical discrimination persisted on the ground.

Watani International covered the incident of two Coptic young women who had gone missing in Fayoum, and whose family and church demonstrated demanding that the police should bring them back. The idea voiced by many Copts was to make sure the young women, both of age, had not been forced into anything, but had gone of their own free will (Nader Shukry, 6 March 2005). 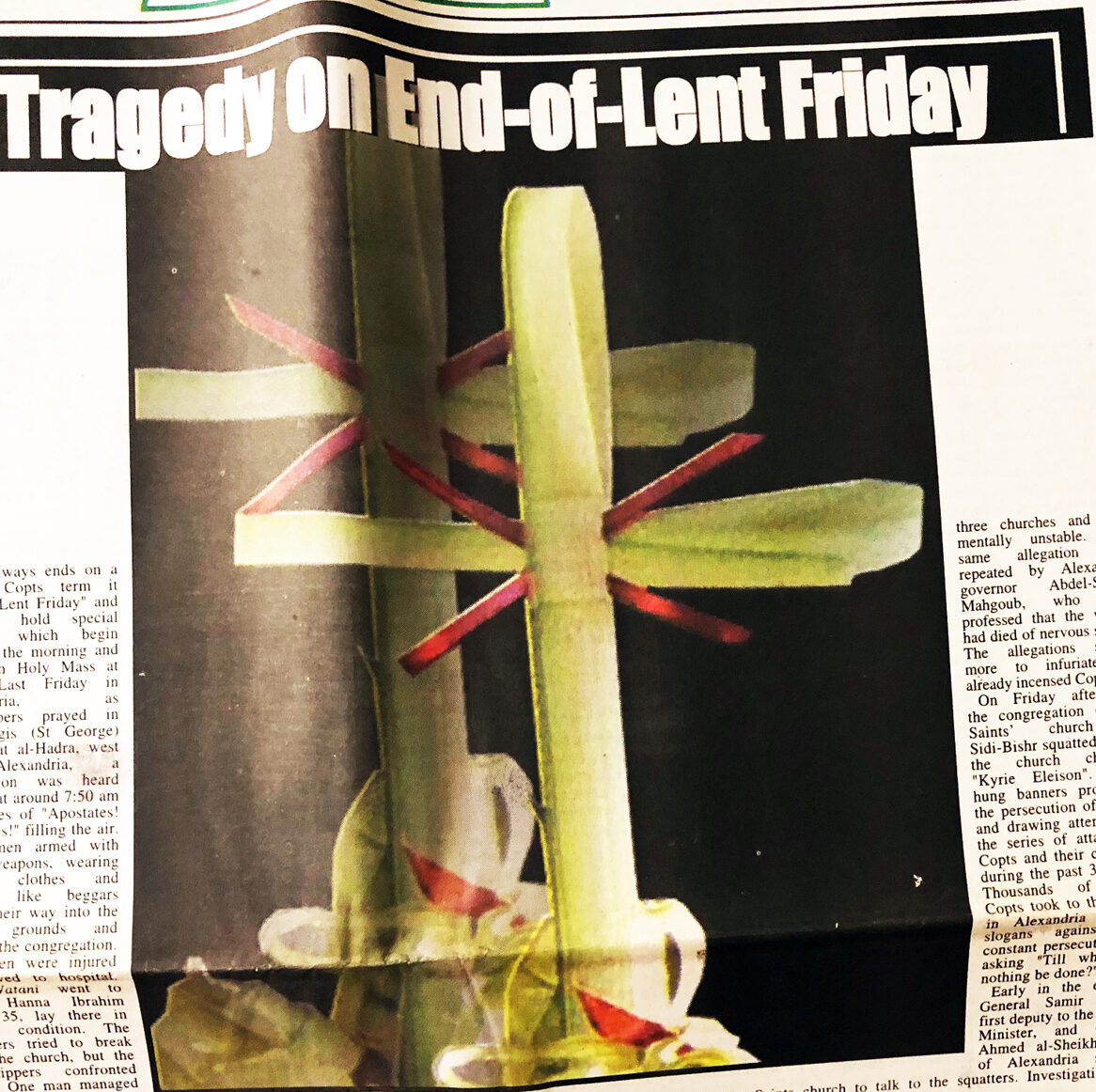 On 23 October 2005, Watani International reported on an attack by a 3000-strong mob of angry Muslims against the church of Mar-Girgis in Muharram Bey, Alexandria, on allegations that a play had been performed there that mocked Islam (Nash’at Abul-Kheir, Nevine Kameel, Joseph Malak)

January 2006 witnessed the horrendous attack against and torching of the village church in Udaisat, Luxor, during which a Coptic man and child died (Victor Salama, 29 January 2006). 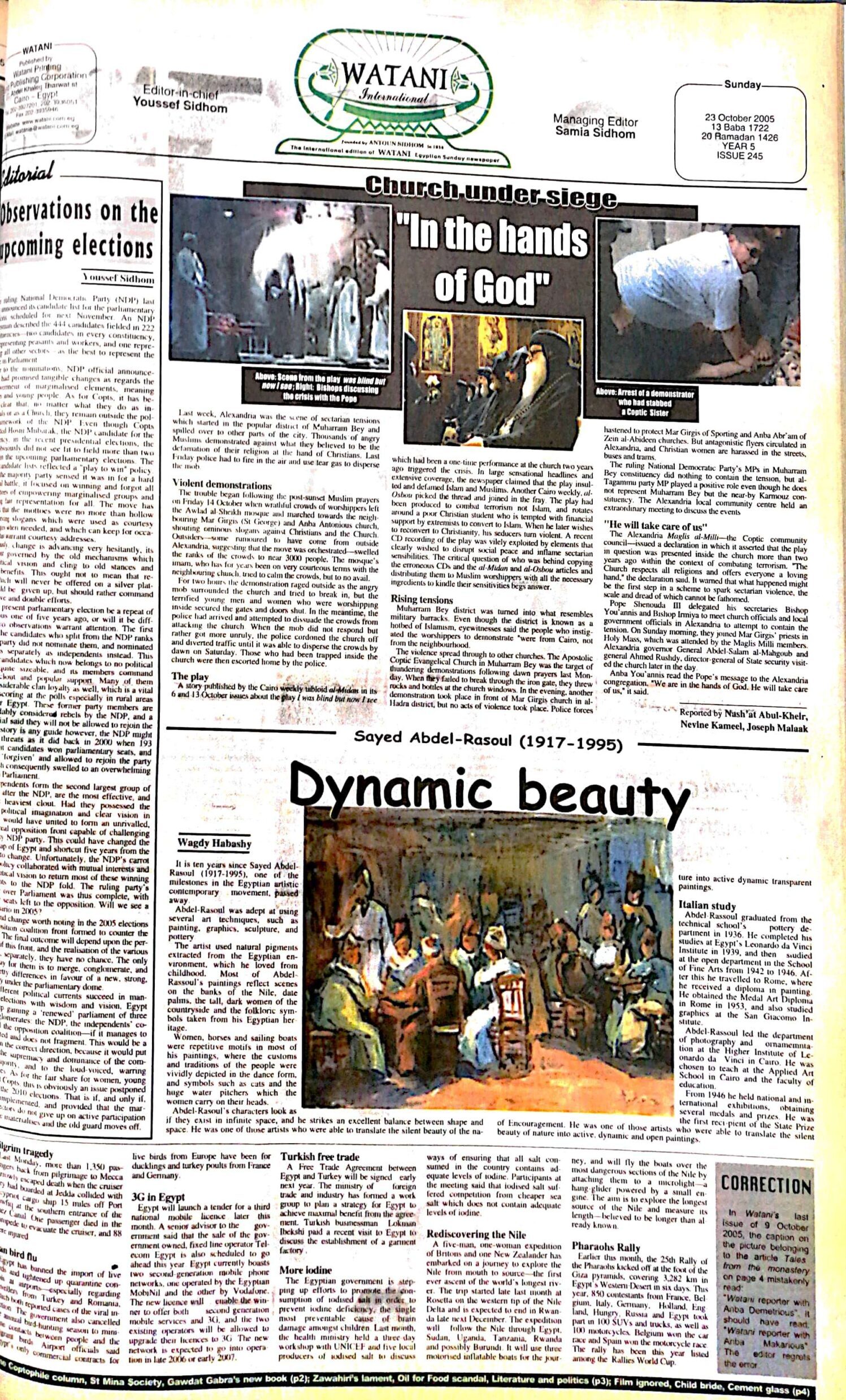 The year went on to see attacks against worshippers in three churches in Alexandria on 14 April, End-of-Lent Friday, by a knife-wielding young Muslim who rushed from one church to the other, in the process stabbing one Copt to death and injuring several others. The following day, fundamental Muslims attacked the Coptic mourners heading out to bury the dead man. The incident brought on outrage among Muslim moderates, a fact finding commission by parliament, and discipline of police officers. Watani International later talked to the only witness in the subsequent trial; the culprit was declared mentally unstable. (Nash’at Abul-Kheir, Nader Shukry, Adel Mounir, 16 April 2006; 30 April 2006; 31 December 2006). 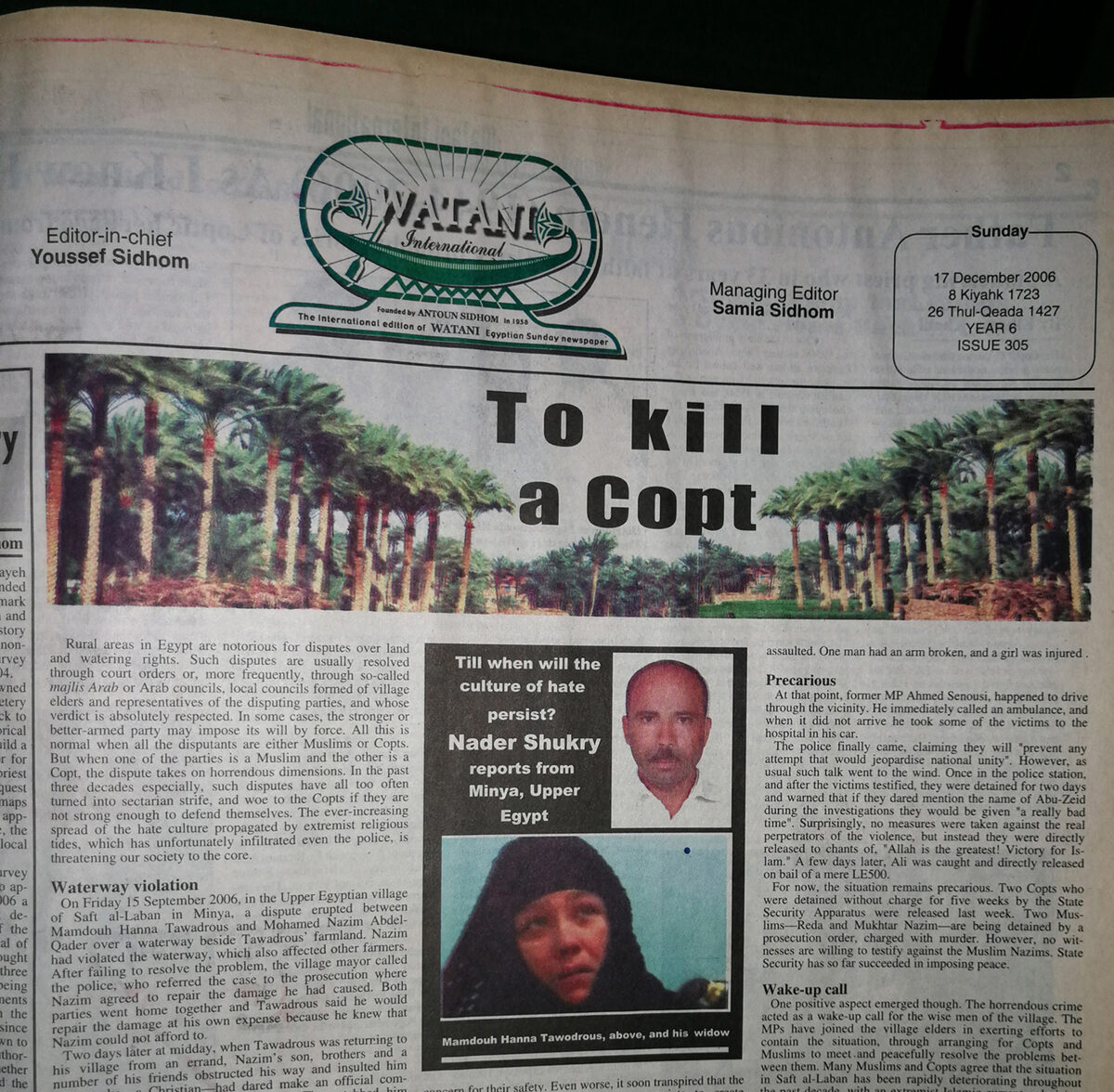 The year ended with the story of the killing of another Copt, this time in a Minya village at the hands of a Muslim fellow villager over watering rights (Nader Shukry, 17 December 2006).

In 2006, Watani International also reported on two other minorities persecuted in Egypt: the Baha’is and the Shiites (Nasser Sobhy, 18 June 2006; Emad Nasseef, 26 November 2006). 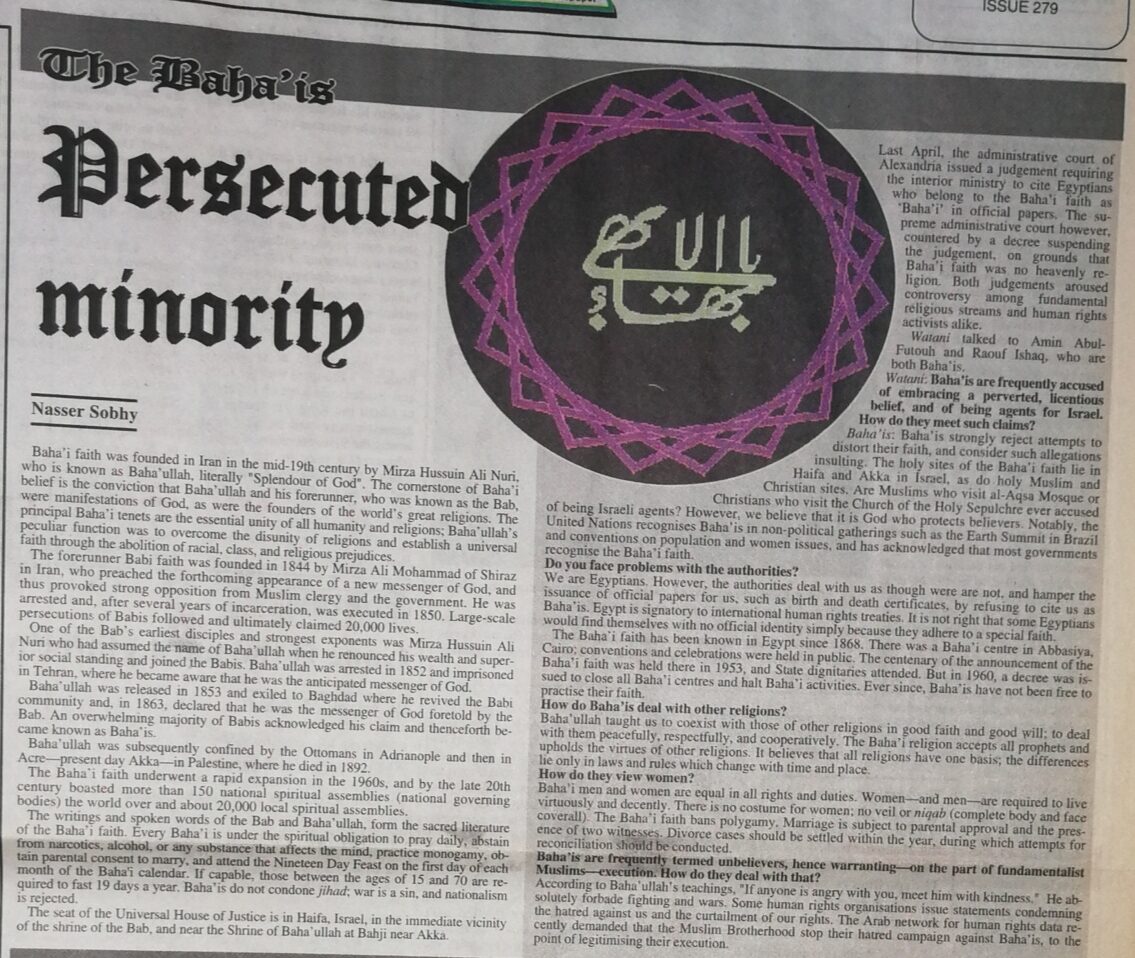 Stories covering heritage and culture featured highly on Watani International’s 2005 and 2006 pages. Prominent among them was coverage of restoration work at the Eastern Desert monastery of St Anthony the Great (Lucy Awad, Sanaa’ Farouk, 23 January 2005); celebrating the centenary of the Coptic Museum in Old Cairo, which was reopened following three years of closure for restoration (Sanaa’ Farouk and Iman Hanna, January 2006); and a call to protect St Catherine’s National Park in Sinai (Iman Hanna, 1 October 2006). 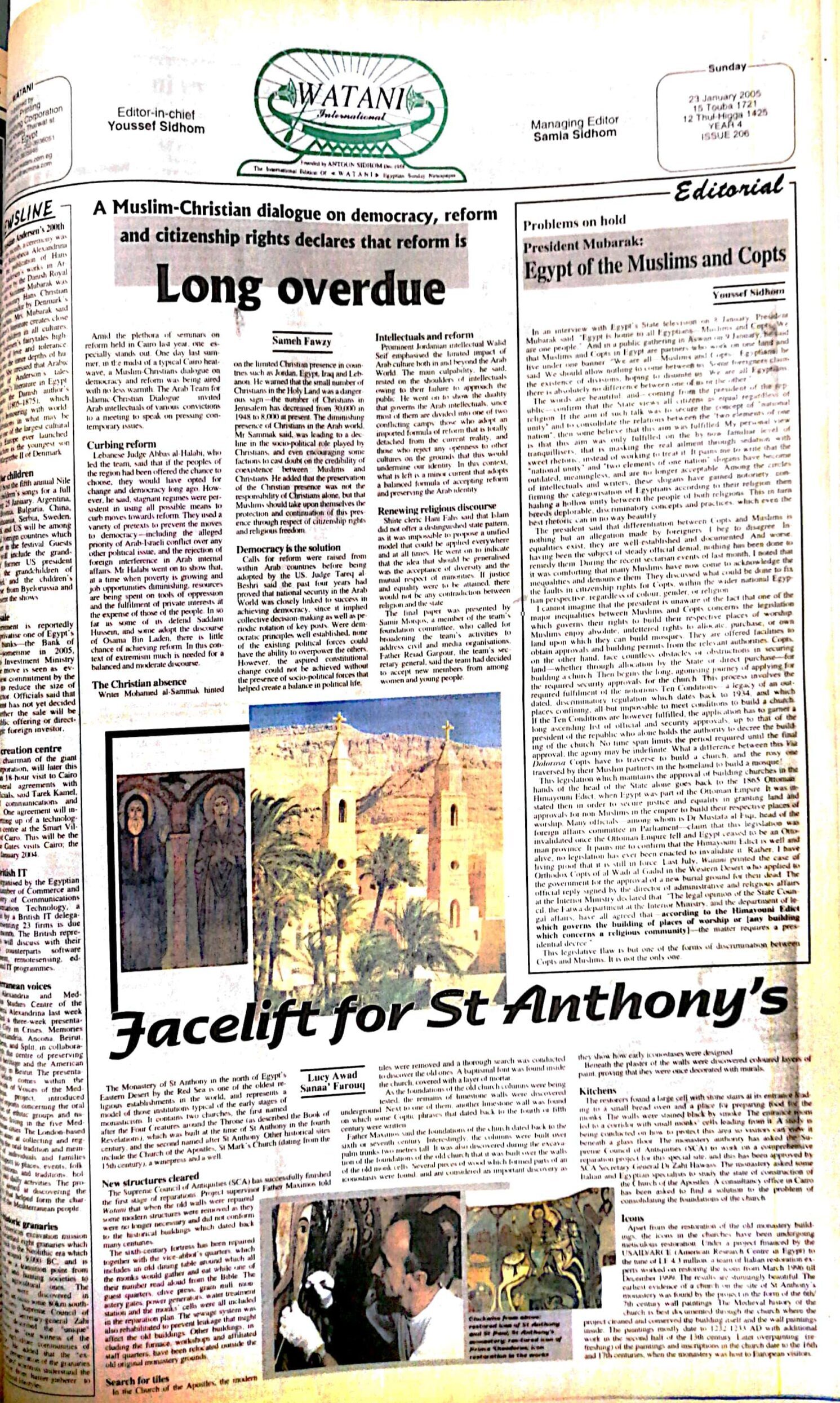 Watani International covered the centenary of the east Cairo suburb of Heliopolis which was founded by the Belgian financier and industrialist Baron Edouard Empain (1852 – 1929); coverage was by  Mary Fikry, Omniya Abdel-Barr, (12 June 2005). Beit al-Seheimi in Islamic Cairo, a splendid sample of Islamic-era houses, was restored and opened as a venue for cultural events (Sanaa’ Farouk, 15 May 2005); and al-Azhar park was opened, also in Islamic Cairo, modelled after Islamic-era gardens (Maged Samir, 30 January 2005). 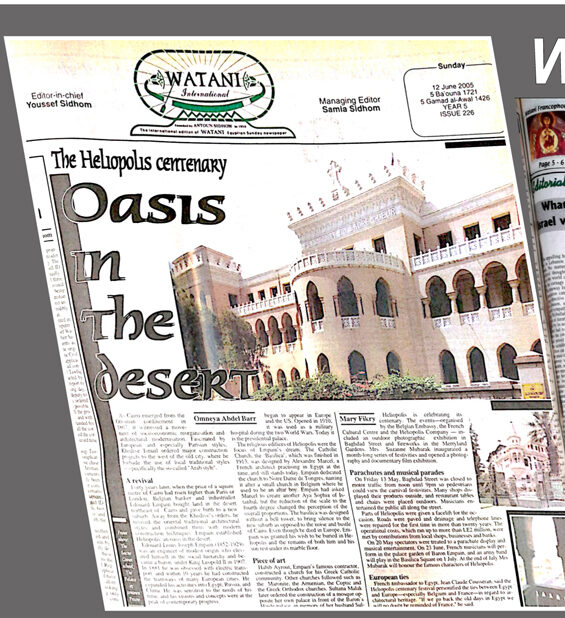 The Suez Canal town saw the naming of a street after the French singer Claude Francois (1939 – 1978) who spent the first 17 years in his life there. His son, nephew, niece, and dresser were there to honour the naming (Mary Fikry, Marina Ihab, 27 February 2005). 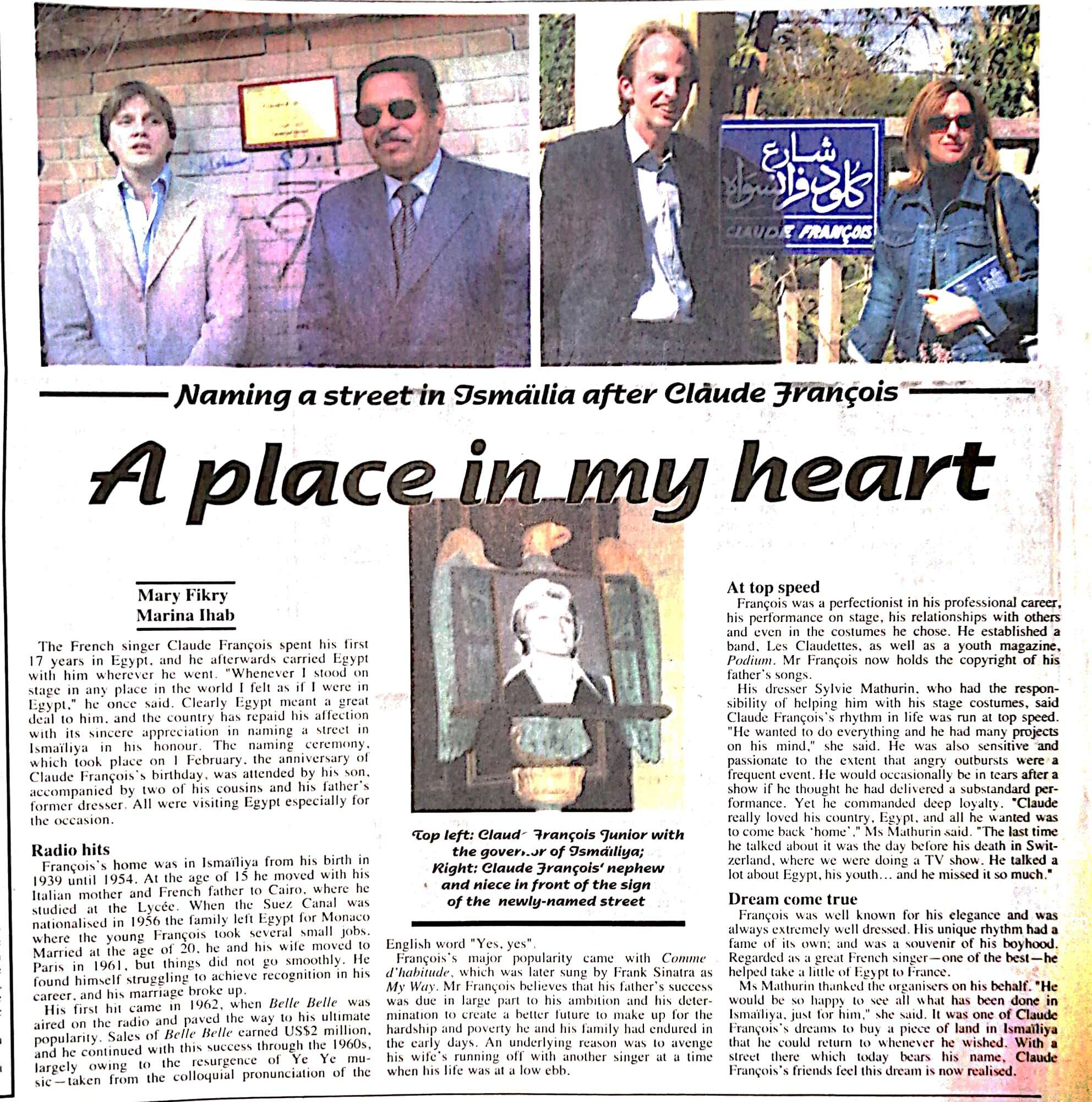 The 2000 ancient manuscript trove at al-Surian monastery in the Western Desert undergoing meticulous restoration work sponsored by the Levantine Foundation featured in coverage by Victor Salama, Marina Ihab (28 May 2006). 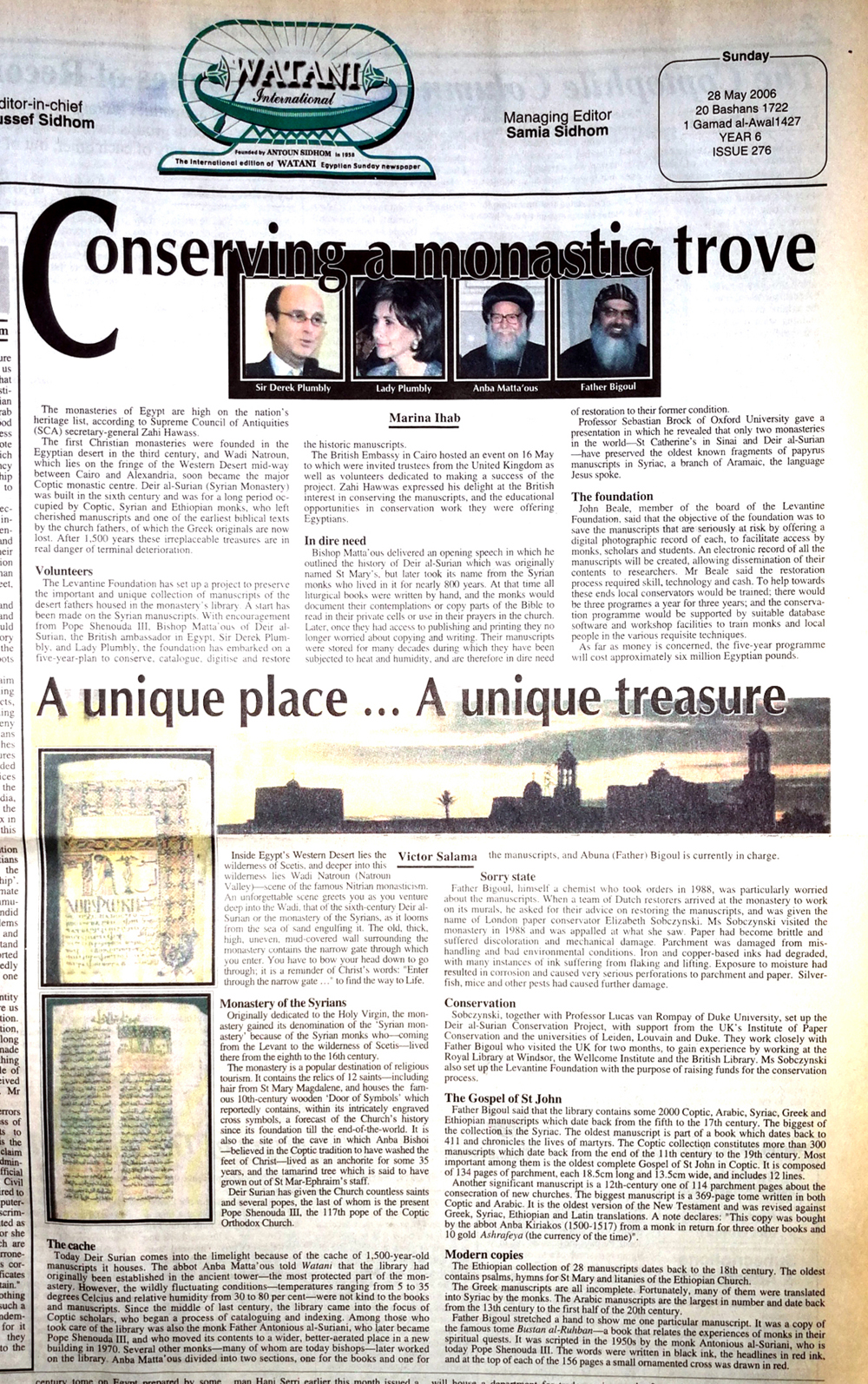 In August 2006, Watani International covered the historic move of the colossal statue of Ramses II from Ramses Square in crowded central Cairo to its new destination where it now graces the foyer of the Grand Egyptian Museum (GEM) on the Giza Pyramids Plateau (Emad Nasserf, Robeir al-Faris, 6 August 2006; 27 August 2006). GEM is due to open in 2022. 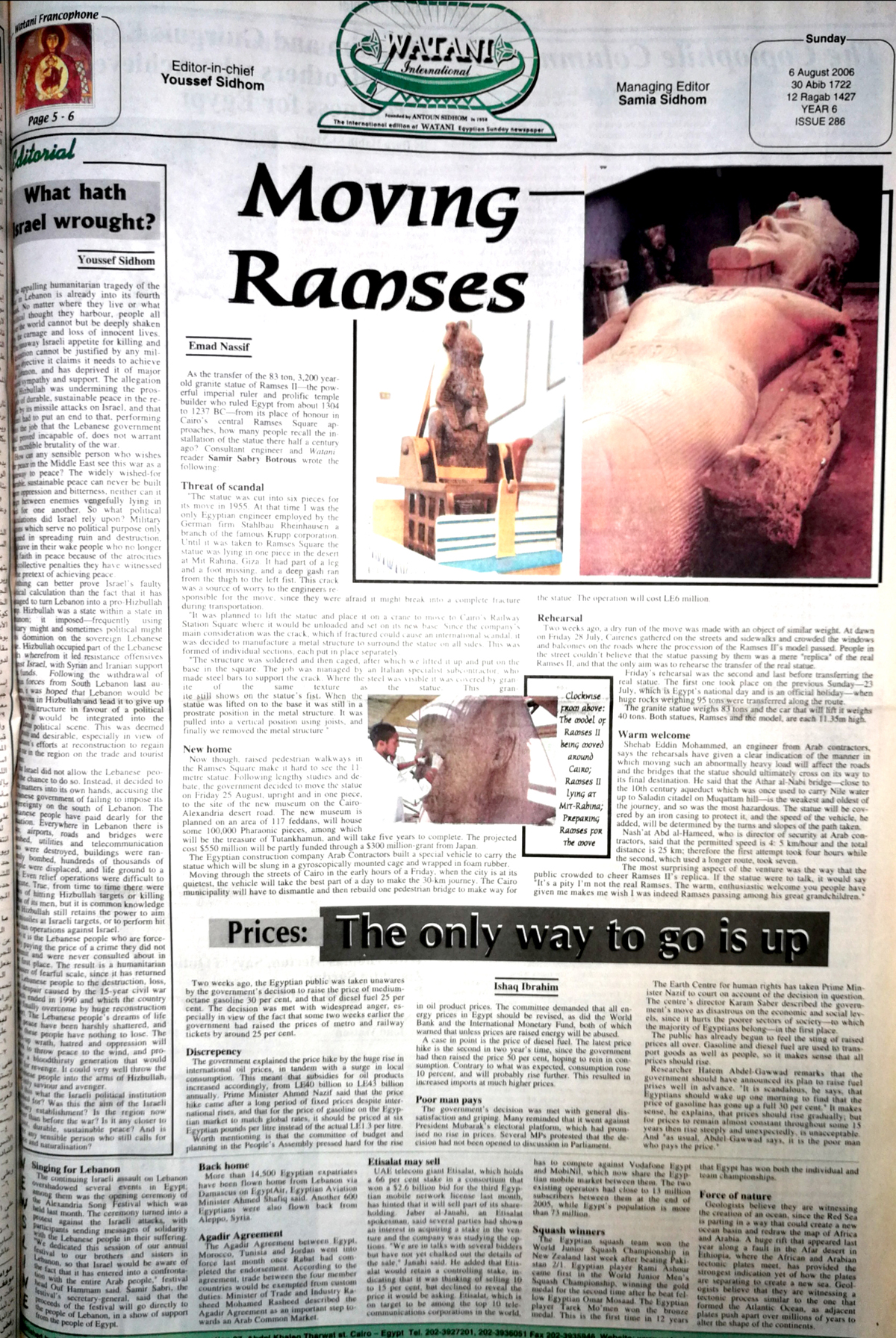 Egypt’s national parks and wildlife came into focus, with special highlight of the then recently discovered giant whale fossil at Wadi Hitan, in two stories by Georgette Sadeq printed on 24 July 2005 and 28 August 2005.

Gone but not forgotten 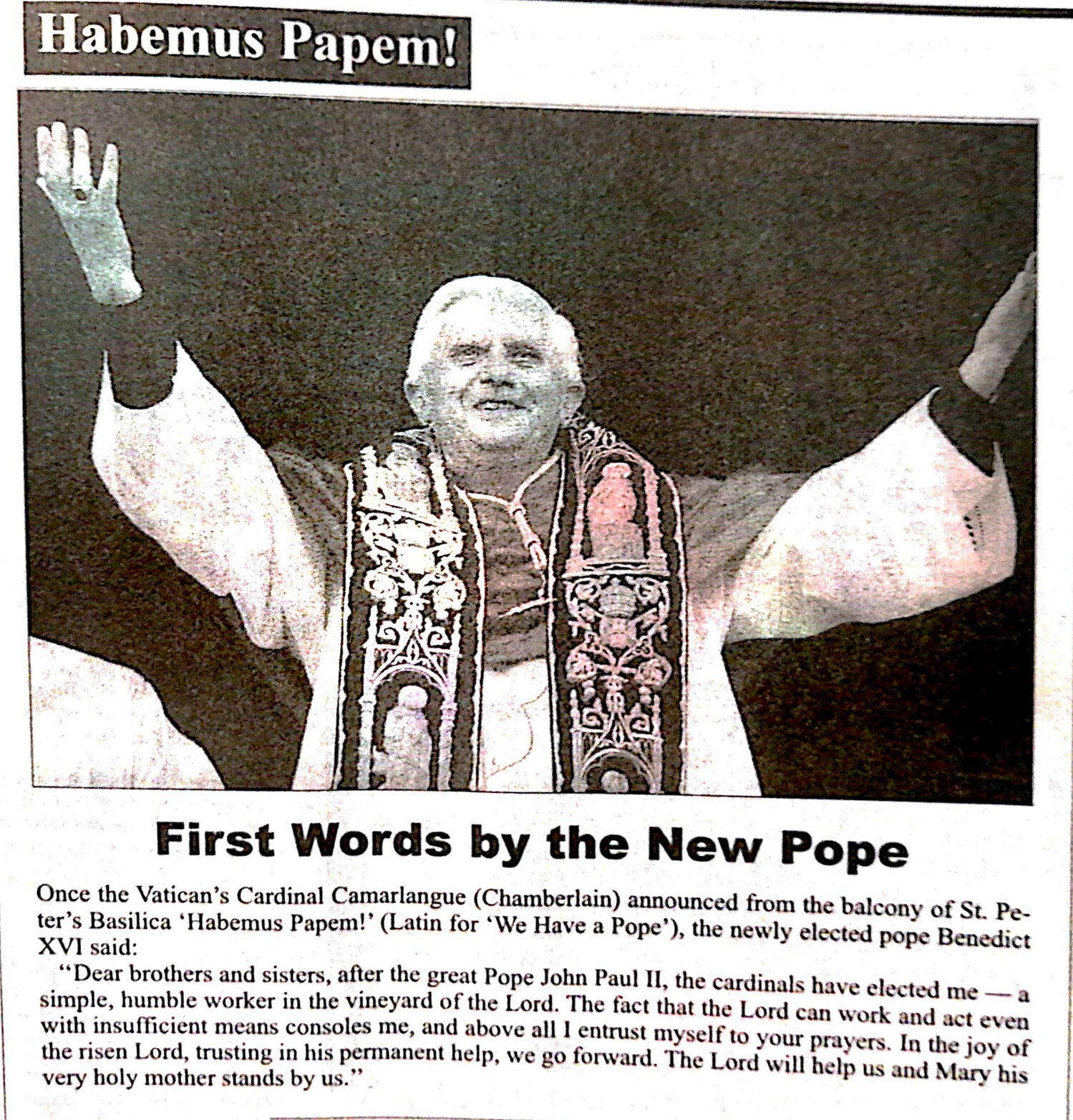 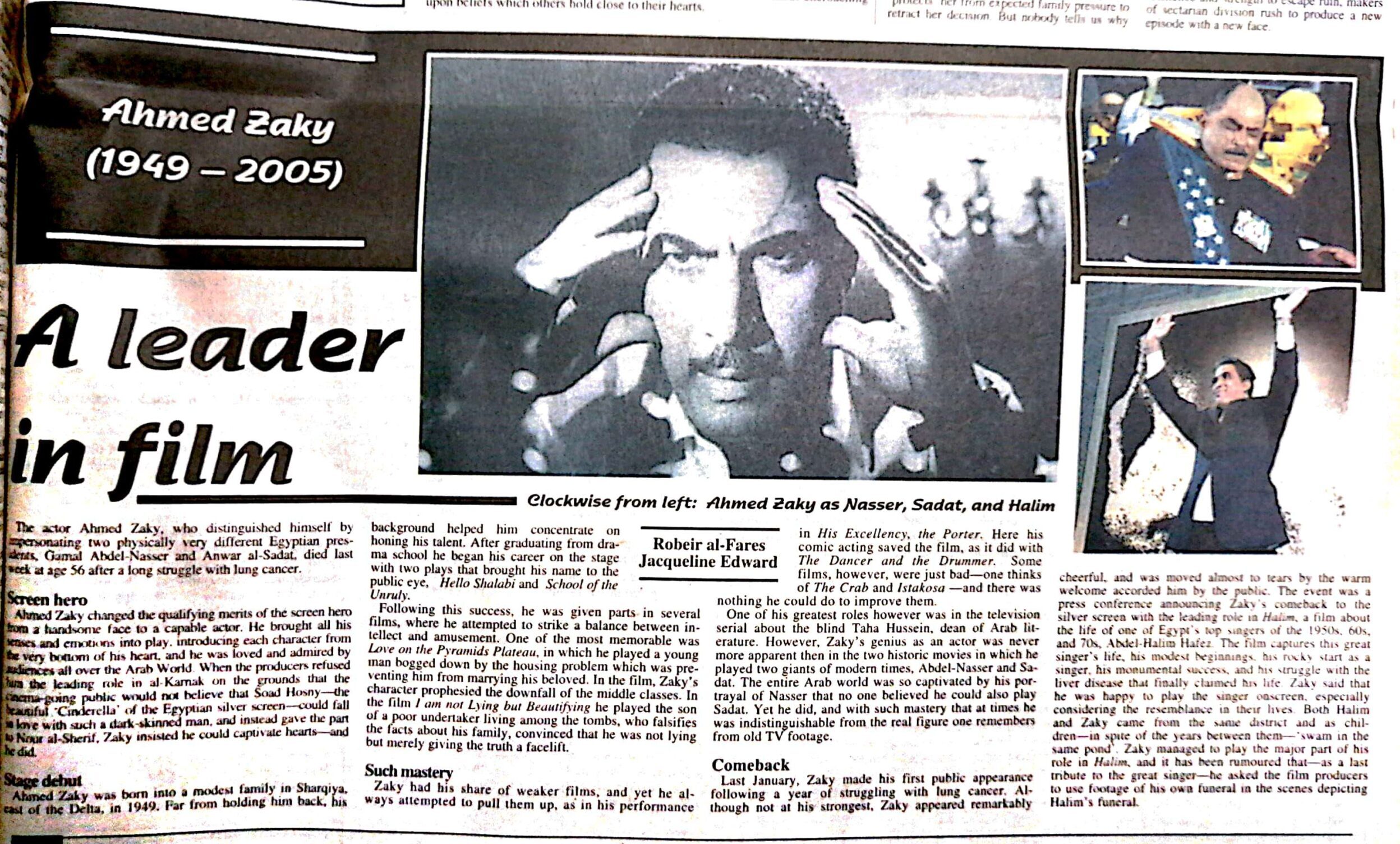 The Journalists’ Syndicate in Cairo commemorated Watani’s founder Antoun Sidhom ten years on his passing (22 May 2005). 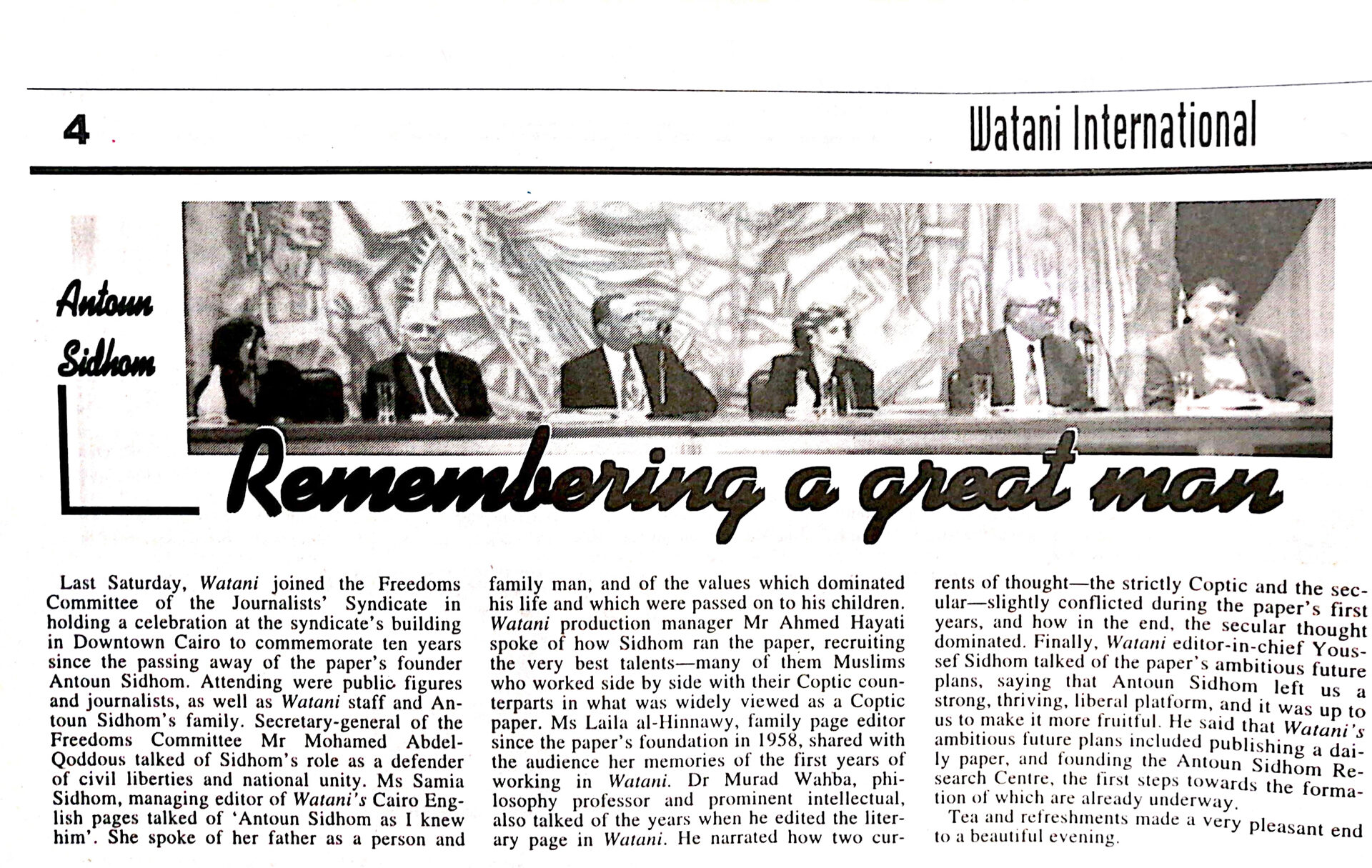 Other obituaries marked the departure of prominent figures: German Coptologist Otto Meinardus (1925 – 2005) who was among the best who wrote on contemporary Copts and their heritage (Cornelius Hulsman, 25 September 2005); and Naguib Mahfouz (1911 – 2006), Egyptian novelist and Nobel laureate (3 September 2006). 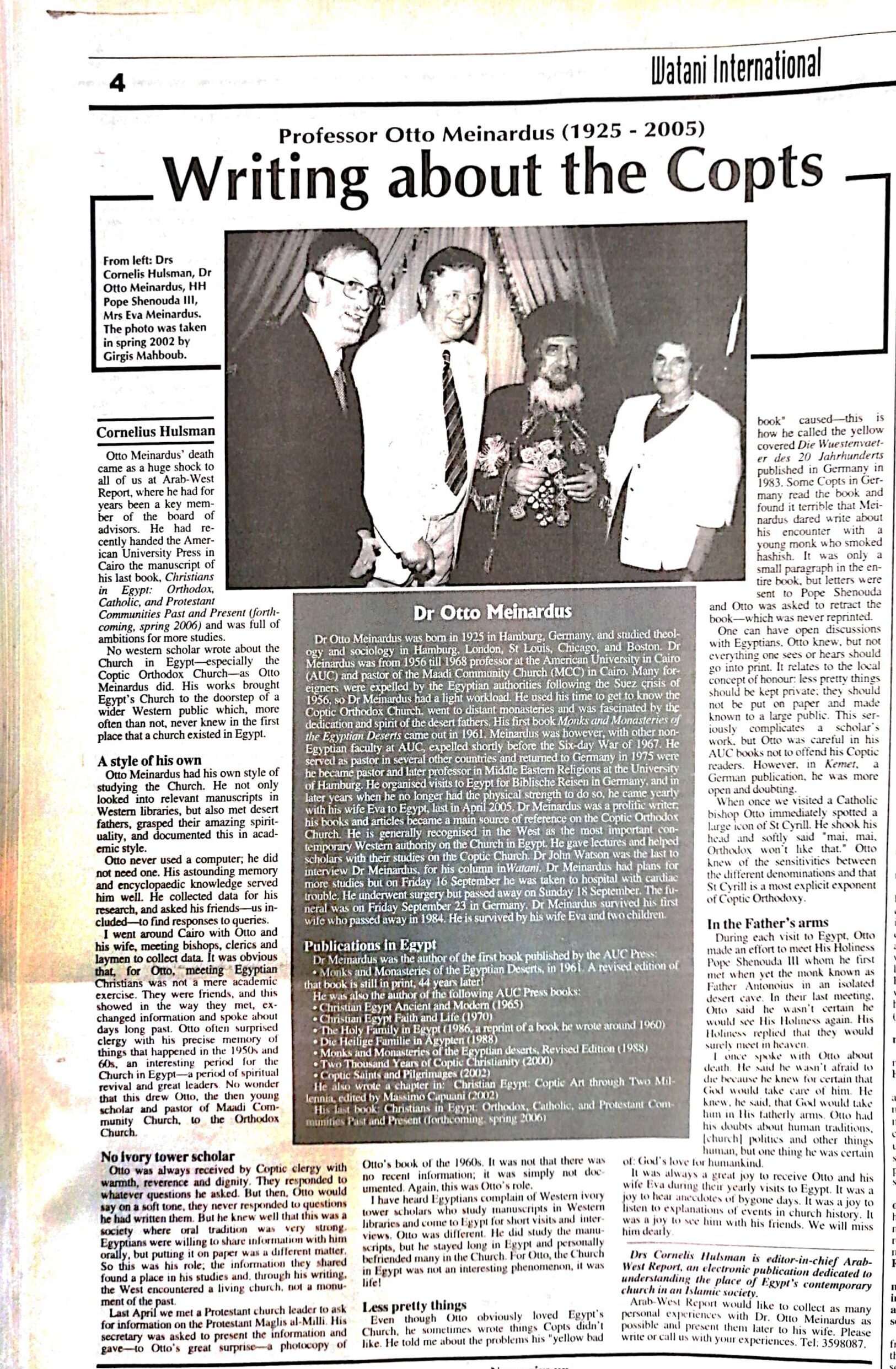 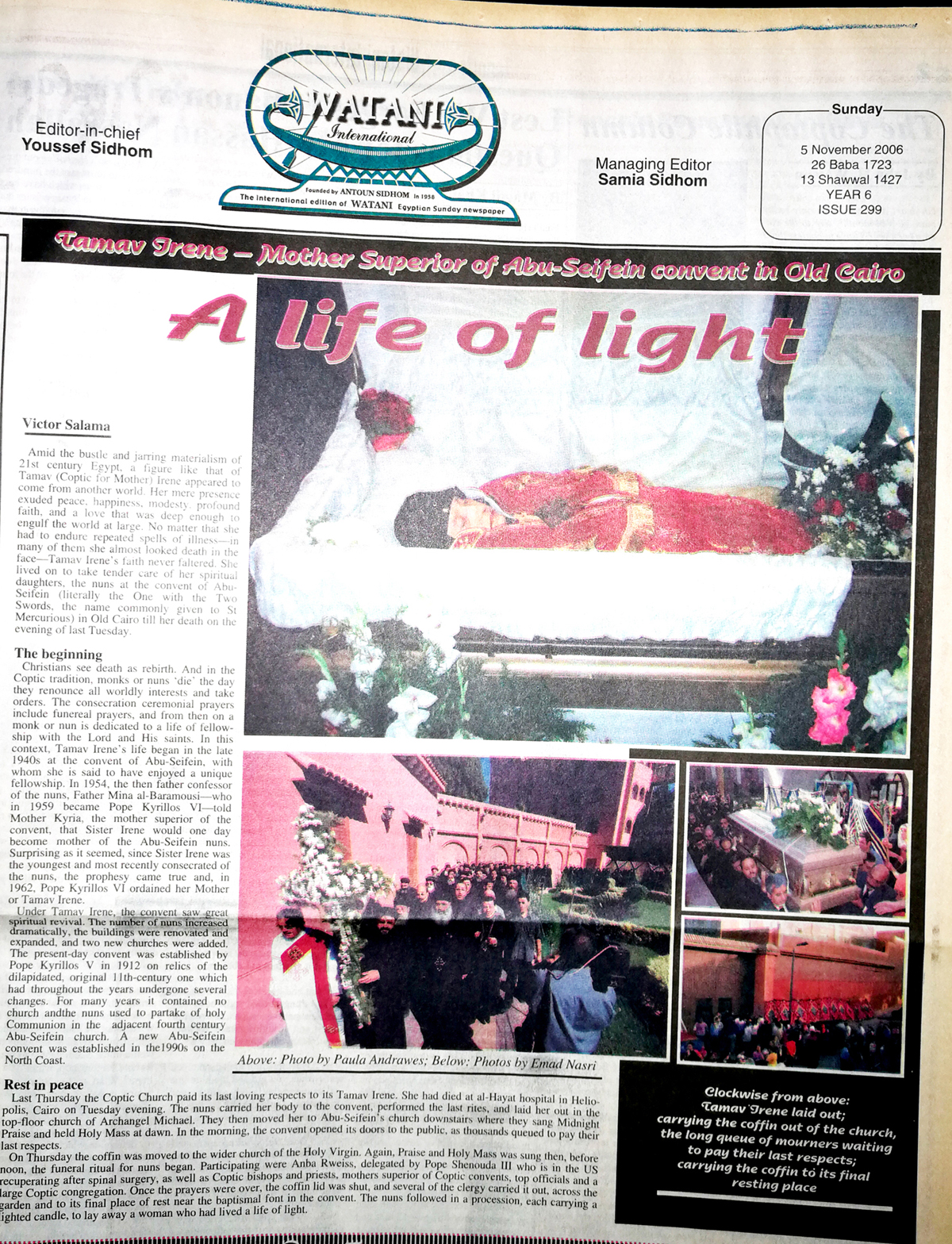 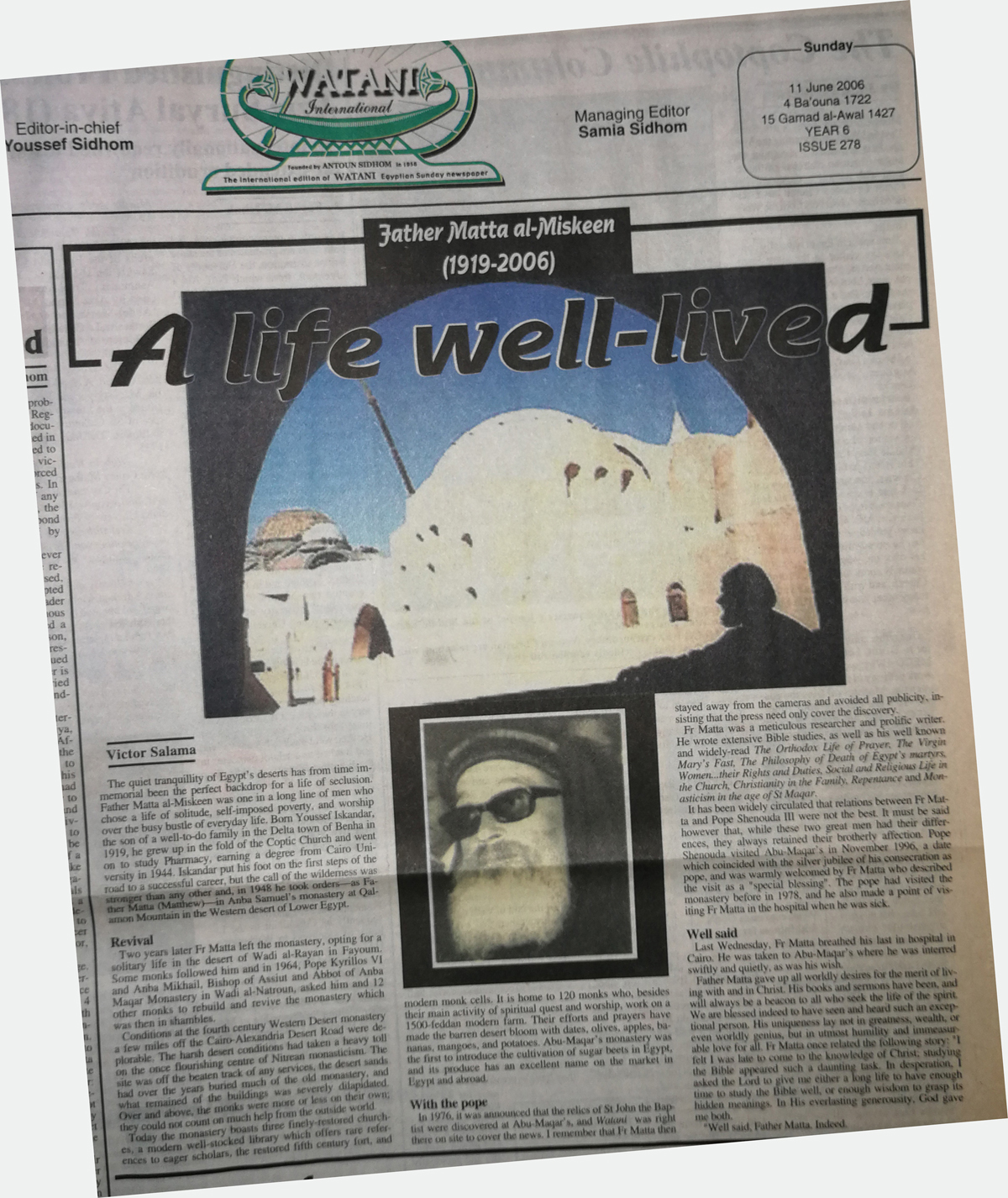 It is good to conclude our review with a Watani achievement in 2005: the launching of Watani Braille in April 2005, the first paper in Egypt in Braille. Sherifa Massoud, herself a blind person and a then journalist at Watani was its Managing Editor. Watani Braille was discontinued in 2010 owing to operational problems. Dr Massoud is today an activist in the disability field and Director of EduFoundation, an NGO which works with children with disabilities.