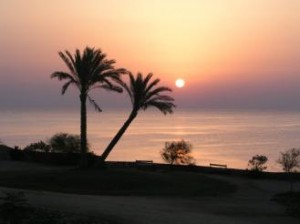 Thus prays the Coptic Church as it celebrates the advent of a New Year on the Anno Martyrus calendar. The New Year begins 1 Tut which coincides with 11 September, or 12 Septemer in a leap year .

Thus prays the Coptic Church as it celebrates the advent of a New Year on the Anno Martyrus calendar. The New Year begins 1 Tut which coincides with 11 September, or 12 Septemer in a leap year.

The calendar is a solar one that goes back to ancient Egypt and was intricately linked to the annual Nile flood and the three agricultural seasons—the inundation, cultivation, and harvest—agriculture being the main activity and livelihood of the majority of the population. The Coptic calendar, however, is the same Egyptian calendar but began in the year AD284, the year the Roman Emperor Diocletian ascended the throne and launched a brutal persecution of Christians. The number of Egyptians who were martyred by Diocletian was so great, that they marked their calendar in reference to that date, and the Coptic calendar was born.
This year’s “Nairuz”, New Year Day, marks the addition of new martyrs to the long list of Coptic martyrs across the ages, the Secretary-General of the Coptic Orthodox Holy Synod,Anba Raphail, tweeted. He was alluding to the many Copts who lost their lives this year on account of their being Christian.
Copts celebrate their New Year by eating red dates which are then in season. The date is a microcosm of their faith: the red stands for the martyrs’ bloodshed, the white heart for the believers’ pure hearts, and the stone for their solid faith.
“Watani” wishes its readers a very happy new year, with the old gone and a new free, fair, joyful Egypt here.
Watani International
11 September 2013