Lest any official should say that nothing can ever please us Egyptians, let me start by spelling out my appreciation of the development of the road networks in the eastern Cairo suburbs of Heliopolis, Nasr City and their surroundings during the last 18 months. The widening of roads and construction of flyovers served to solve the notorious traffic congestion at intersections, and achieved remarkable traffic fluidity. The target of this ambitious work was to relieve the congestion on the roads that lead to the Cairo-Suez and the Cairo-Ismailiya highways which were witnessing huge escalation in traffic from Cairo to the new urban settlements that had sprung up alongside these roads. It was also foreseen that the road development conducted would serve to accommodate more future traffic between Cairo and Egypt’s New Administrative Capital which can be reached through these two highways.

On the ground, the road development paid off in admirable traffic fluidity, but Heliopolis residents had to accept to pay a price in losing vast green spaces in the process. The same residents, however, found it impossible to accept for any reason the construction of a flyover that would have straddled some of Heliopolis’s most significant urban and historical spots. The unannounced project of a new flyover was intended to connect the two far flung major roads of Abu-Bakr al-Sedeeq and al-Mirghany. It would start at Safir Square, pass through Othman Ibn Affan Street, Ismailiya Square and Salah Eddin Square, to reach the famous square where Heliopolis’s oldest church known as the Basilique stands, and on to al-Ahram Street, ending at al-Etihadiya Palace—today the presidency headquarters—and Heliopolis Sporting Club. The prospective flyover would have barged into a substantial Heliopolis axis that brims with landmarks and buildings which carry invaluable historical, architectural and cultural worth. It came as a huge shock that the officials in charge appeared to be oblivious to the damage entailed; they argued that none of the buildings or landmarks would be touched. They seemed not to realise, or were disregardful of the fact that the overhead traffic would smother the urban style, disfigure it and shut out its visual merit. This can only be described as a crime against civilisation, a crime unfortunately not without precedent in Cairo; one has only to look at Ramses Square or al-Azhar Street.

Heliopolis residents got wind of the prospective flyover once they saw construction and digging equipment positioned in the spots in question. Heated protest erupted everywhere. The people rushed to the MPs and Senators that represented them. These in turn hastened to the construction sites, and followed by addressing the authorities concerned. They demanded full reconsideration of the entire project, explaining the threat it posed on the cultural, urban, environmental and aesthetic fronts. In this context, I will here present a number of expositions on which the demand was based, according to their relevance: 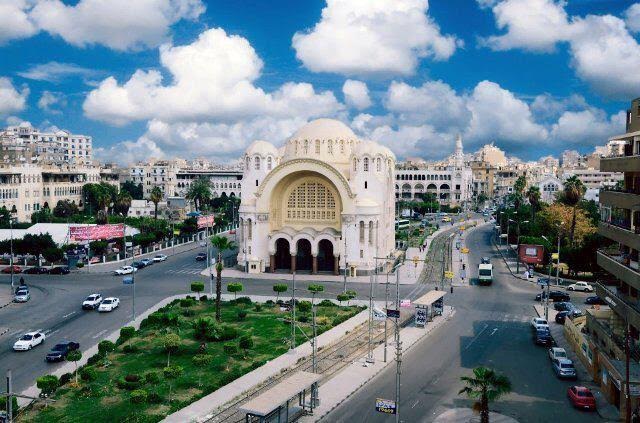 Egypt’s Architects Association issued a statement which started out pointing that the Basilique axis flyover which extended from Safir Square through Othman Ibn Affan and al-Ahram streets on to Heliopolis Sporting Club had not been mentioned in the original plan to develop the Heliopolis axis of Abu Bakr al-Sedeeq, Galaa’ Club, Mirghany, al-Shams Club and Gisr al-Suez Street.

The Basilique flyover, the statement said, follows a path that encompasses buildings, villas, and churches which feature unique architectural styles designed by the Heliopolis Company in 1905 – 1910. It proceeds to the gem of Heliopolis, its most important square which houses the Basilique. The statement reminds that Heliopolis founder Baron Edouard Empain (1852 – 1929) is buried there, and that the church is surrounded by a wide garden and Moorish style buildings designed by the Heliopolis Company. The flyover then passes over al-Ahram Street the prominent landmarks of which include what used to be the 1920 Heliopolis Palace Hotel and is now the Etihadiya presidential palace. The final point of the path is the long-standing Heliopolis Sporting Club, also built in 1920.

“The unified building law number 119 for 2014 stipulates conditions to preserve heritage sites,” the Architects Association statement read, explaining that the law specifies conditions that address Heliopolis and the bases of preserving it as a neighbourhood of distinct value. This law prohibits the construction of any structures over public or open spaces, or streets and squares, that would result in interference with or abuse of the visual image of the façades of existing buildings. These structures, the statement read, include traffic or pedestrian flyovers, banners and advertisements. “This is a clear legal text that prohibits all sorts of flyovers,” the statement said. Maps attached to the law determine the degree of prohibition ranging from A to C. The heart of Heliopolis, the Othman Ibn Affan axis, the Basilique Square and al-Ahram Street are included under category A which is the highest in terms of prohibition of construction, owing to the exceptional value of their urban fabric; no concessions can be allowed there. “Accordingly,” the statement read, “the State must take the initiative to stop the project of the Basilique flyover since it violates the unified building law, and the conditions to preserve the architectural and visual heritage of the urban fabric in what remains of the old beautiful suburb of Heliopolis.”

For his part, prominent physician and political activist Muhammad Abul-Ghar wrote: “Stop the catastrophic destruction of everything that is beautiful in Cairo! Many Heliopolis landmarks have already been demolished, and now the major Basilique axis is being targeted. This only proves that those in charge of solving traffic problems lack all aesthetic sense and appreciation of the value of heritage.” Dr Abul-Ghar wrote that the Supreme Council of Culture has denounced what is taking place in Cairo, and that UNESCO has expressed its concern that Egypt could be removed from the World Heritage list and placed instead on the Endangered Heritage list.

Along the same line, prominent architect Seif Aboul-Naga described the prospective flyover as “a grave architectural and urban error,” even if needed to improve traffic. “Instead of increasing pedestrian venues in the heart of Heliopolis at the expense of motor vehicles, chaos reigns supreme through the flyover projects that run over Heliopolis’s old streets and landmarks,” Dr Aboul-Naga wrote. He referred to a quote by prominent Iraqi British architect Zaha Hadid who visited Cairo in 2010: “Had your fiercest enemies managed the development of Heliopolis, a place I loved as a child, it wouldn’t have come to what I see now … You have ruined beautiful landmarks.”

Egyptian archaeologist Monica Hanna wrote: “Egypt’s heritage is not represented by its ancient antiquities alone; heritage extends from past to present. Documenting Egypt’s more modern architectural heritage with a view to preserving it cannot be separated from documenting its ancient heritage. It is the culmination of the collaborative effort of successive generations who designed and created it.” Ms Hanna pointed out that documenting any building over 100 years old conforms with the UNESCO 1972 agreement—of which Egypt is signatory—to preserve buildings of high historical, artistic, scientific, or societal worth. “Even if half of Cairo’s buildings were to be documented as heritage sites, it would be a source of pride for all Egyptians,” she remarked.

I chose these examples of rational protest since I prefer to steer clear of hysterical anger. I hope the issue of the preservation of Heliopolis heritage gets resolved with the wisdom and insight warranted by authentic Egyptian heritage.