Less than a year ago, King Charles III and Queen Camilla, then the Prince of Wales and Duchess of Cornwall, paid a memorable visit to Egypt. Watani honours the King and Queen by reprinting excerpts from a story on their visit published on 21 November 2021.

In their first trip outside the UK since the eruption of the COVID-19 pandemic, Prince Charles and the Duchess of Cornwall paid a two-day visit to Egypt that ended on 19 November. It was their second trip to the country—the first was in 2006. 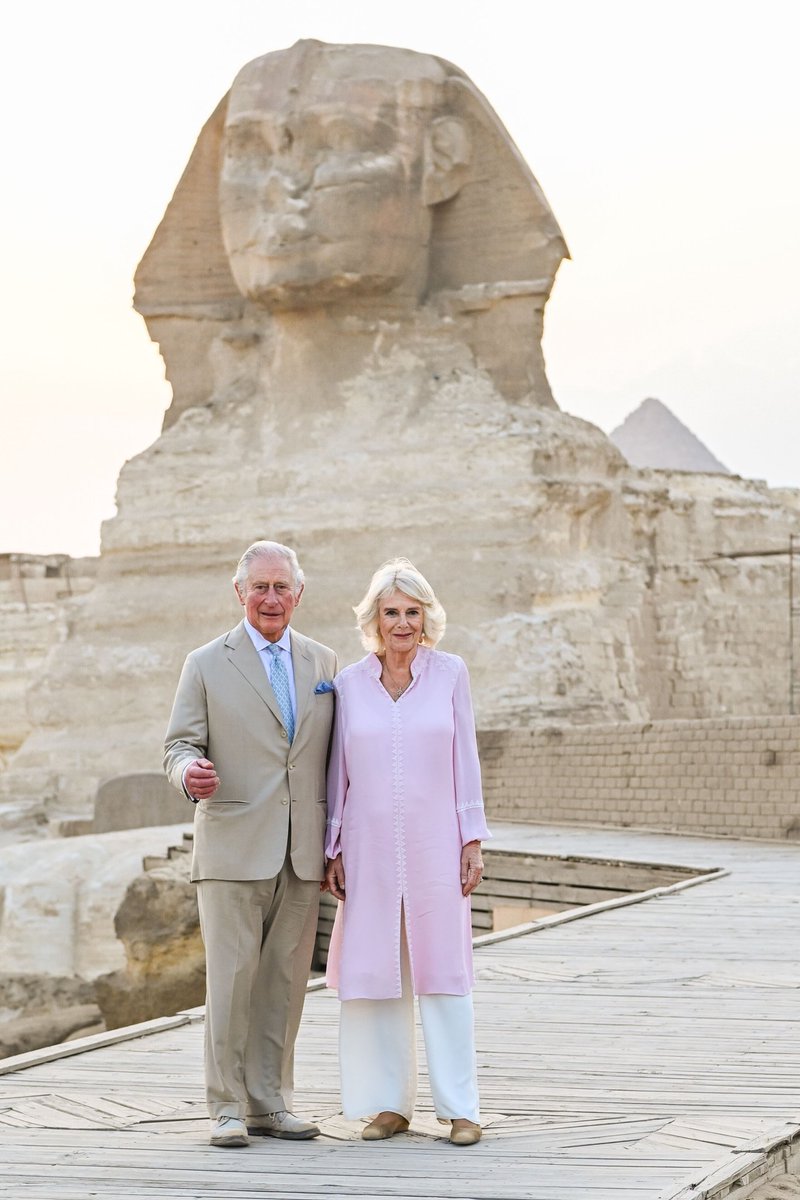 In Cairo, the royal couple were received by President Abdel-Fattah al-Sisi and his wife Intissar at al-Ittihadiya Presidential Palace. Talks focused on working together on the climate crisis ahead of COP27 which will be held in Sharm al-Sheikh, Egypt, in November 2022. 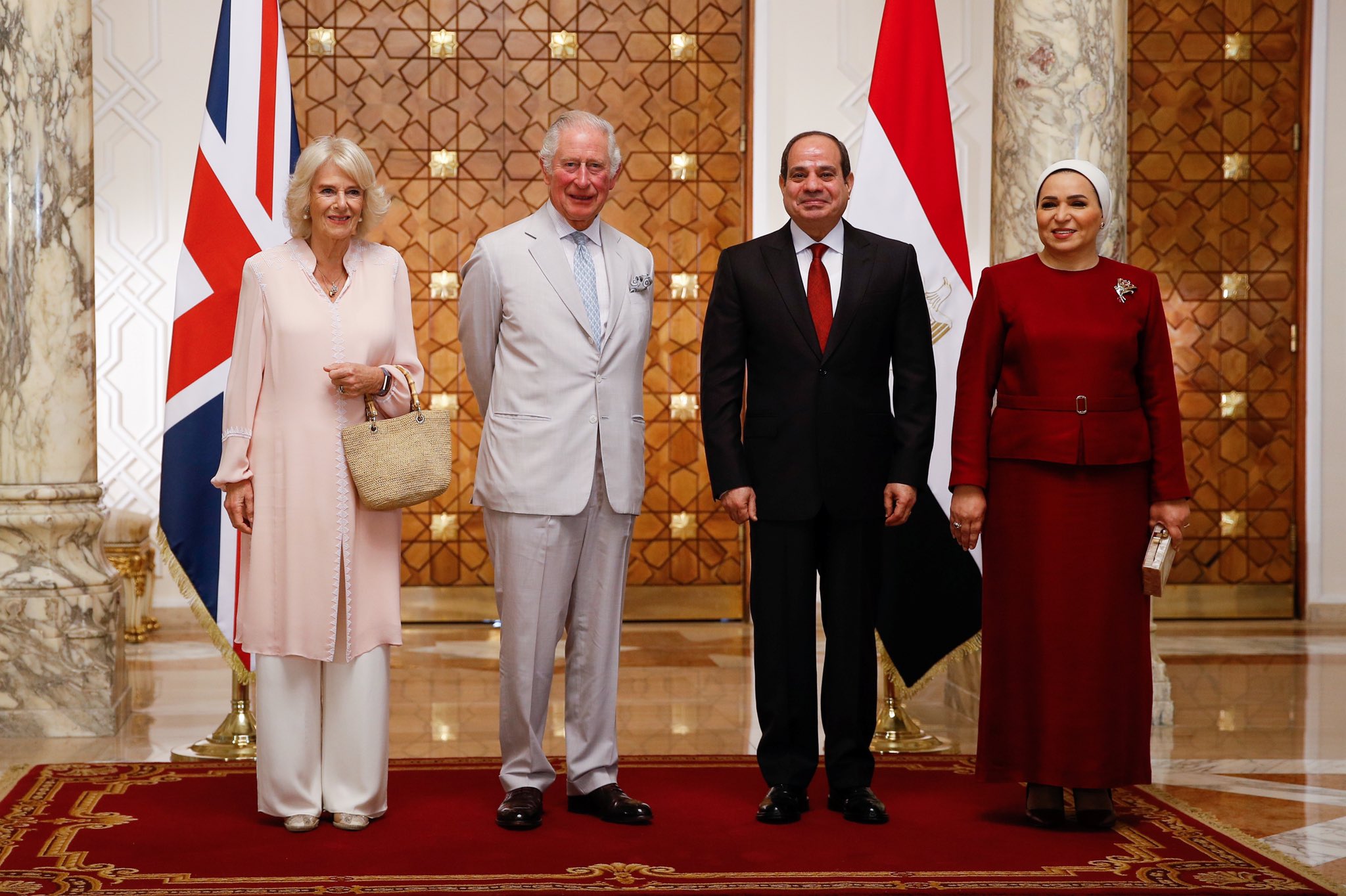 The Crown Prince and the Duchess of Cornwall met the Grand Imam of al-Azhar, Sheikh Ahmed al-Tayyeb, and talked with him about enhancing relations with the UK and the Anglican Church. 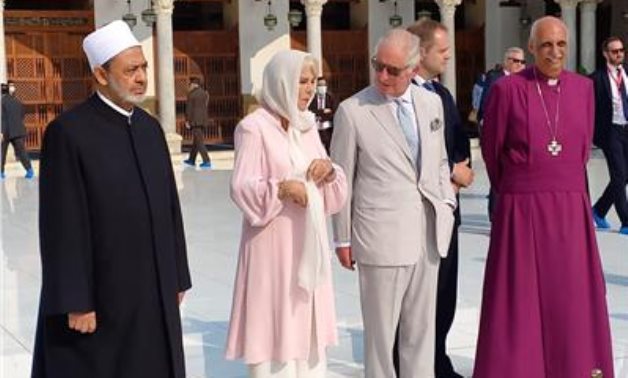 The Prince also met Pope Tawadros of the Coptic Orthodox Church. Their discussions focused on climate change and battling violence against women, which the Church actively addresses. The Pope explained that the Church’s regular worship has always included prayers for the River Nile, the air, the plants and crops—pivotal elements of the environment—and highlighted Church efforts on the environment front. 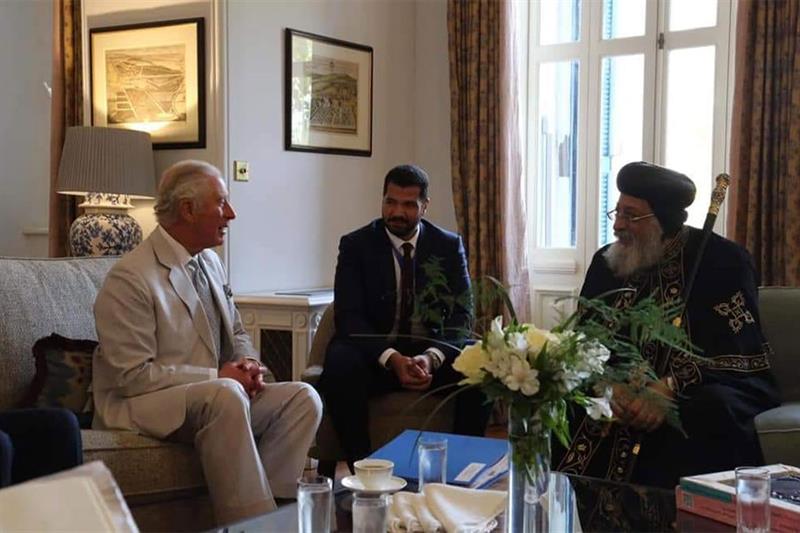 Attending the meeting was Anba Angaelos, Coptic Archbishop of London, who tweeted: “Honoured to accompany HH Pope Tawadros II at a meeting with HRH the Prince of Wales during which they discussed the Christian understanding of stewardship over all creation and the role of faith communities in safeguarding the environment today.”

The Prince met Egypt’s Minister of Environment Yasmine Fouad, and talked with leaders of emerging tech startups and corporate and institutional sustainability and climate leaders. 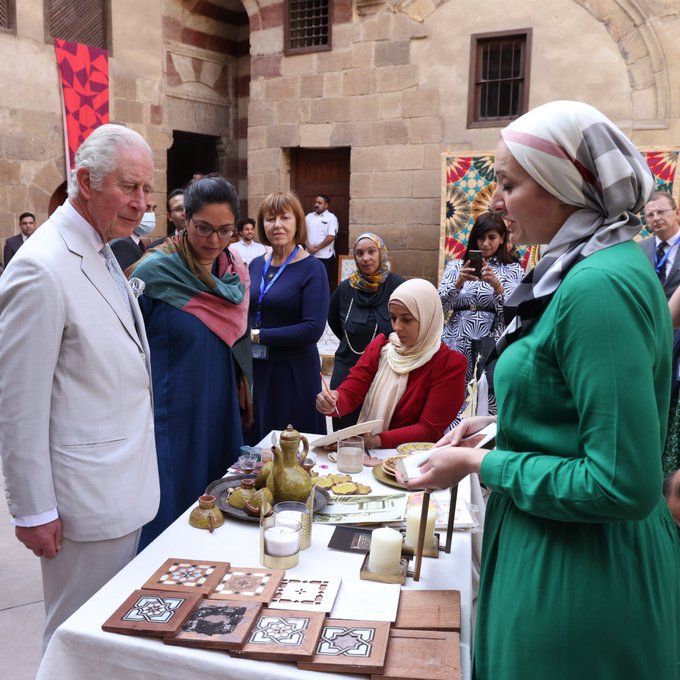 He visited Beit al-Razzazz in medieval Cairo, an Islamic era 190-room urban palace which was restored between 1997 and 2007, and currently houses Egyptian craftspeople and arts and cultural activities. There, the Prince was briefed on the Egyptian Heritage Rescue Foundation (EHRF), an Egyptian NGO founded in 2013 with the objective of promoting and safeguarding Egyptian and regional cultural heritage. The Prince spoke to young craftspeople from the EHRF and the Jameel School which is supported by the Prince’s Foundation. 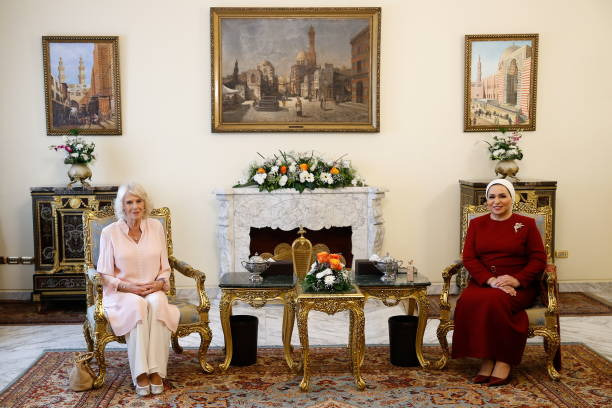 Given the Duchess’s charity work which covers health, literacy, supporting victims of sexual and domestic violence, girls’ education and women empowerment, Ms Intissar al-Sisi talked with her about the Egyptian State’s efforts at securing a decent life for all Egyptians, with special focus on women, through a series of initiatives and presidential programmes. The Duchess then paid a visit to the underprivileged district of Ezbet Khairallah in eastern Cairo to check on projects funded by the UK to empower women and combat climate change. She learned about the community initiative of growing tomatoes, and planted her own seedling and watered it. 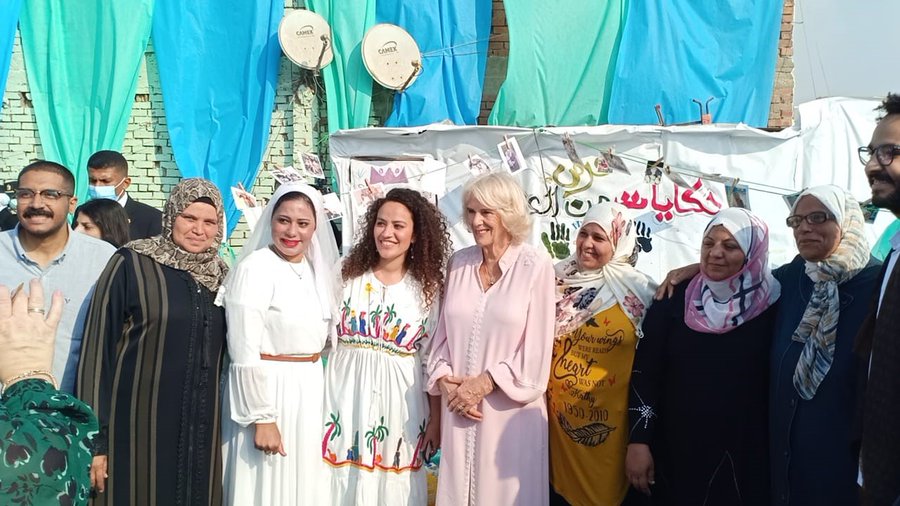 The Duchess, who is famously interested in animals , visited The Brooke, a veterinary hospital set up in Egypt in 1934 by the British Dorothy Brooke. Duchess Camilla was warmly welcomed at The Brooke which she had first discovered in 2006 while on her first visit to Egypt. Across Egypt, The Brooke has four other hospitals and 28 mobile teams, which treat around 160,000 horses, donkeys and mules every year. During the pandemic, it ran a feeding programme for 1700 horses working at tourist sites across Egypt, as their owners lost income due to the lack of tourism. 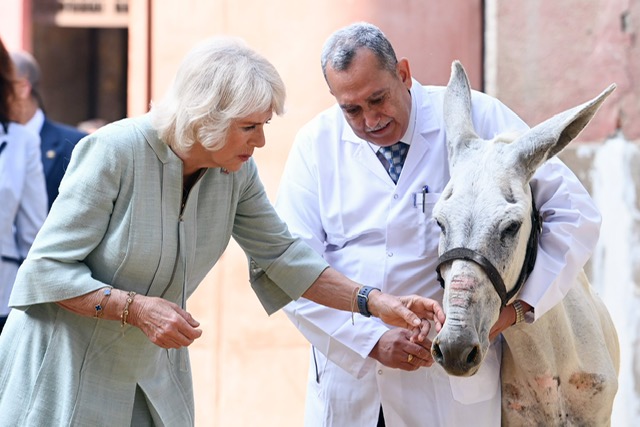 The royal couple visited Alexandria where they toured the Bibliotheca Alexandrina (BA), the modern-day library that emulates the third century BC Great Library of Alexandria, one of the largest and most significant libraries of the ancient world. The BA, which opened in 2002, is built on a magnificent site alongside Alexandria’s ancient harbour in the centre of the city; its 160m-diametre circular form tilts forward towards the Mediterranean shoreline, and its rooftop pyramidical glass panels glitter in the sun, symbolising “the rising sun of knowledge”.
Duchess Camilla joined children in their reading space, reading for them “We’re Going On A Bear Hunt”. 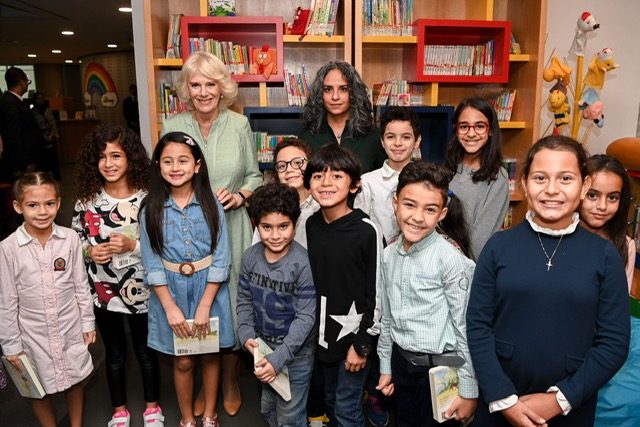 One of the children asked what Her Royal Highness’s best moments on her Egypt visit was, to which she unhesitatingly replied that it was the visit to the Pyramids and the Sphinx. 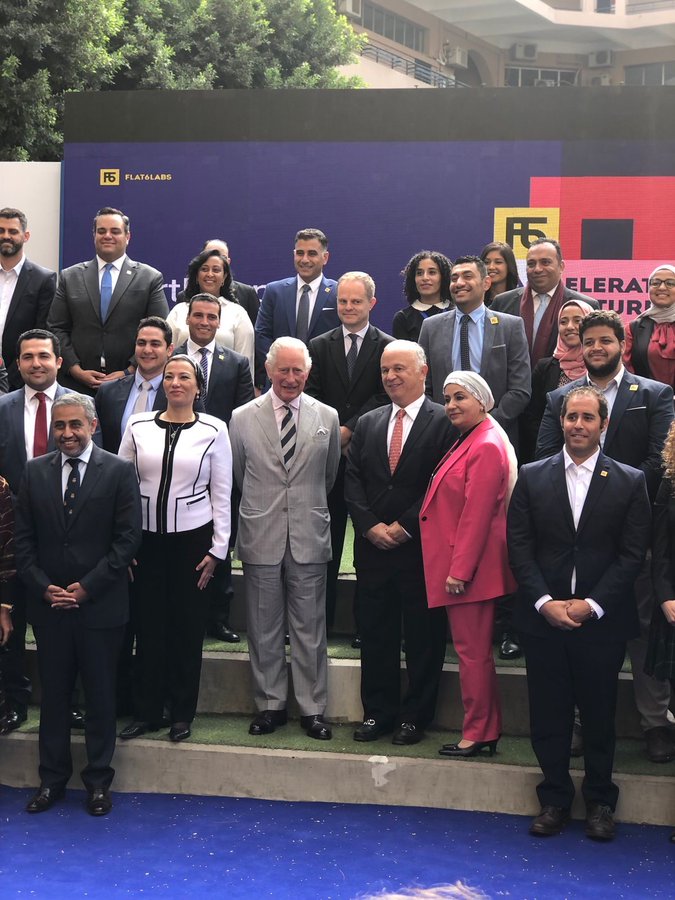 The royal couple had visited the historic site of the Pyramids and Sphinx at sunset, where they took photos and entered the Great Pyramid. On their Twitter account they posted: “A phenomenal moment at one of Egypt’s great sites of rich ancient history.”

In their last evening in Egypt, the Royal couple were back at the foothill of the Pyramids, attending a reception in their honour. 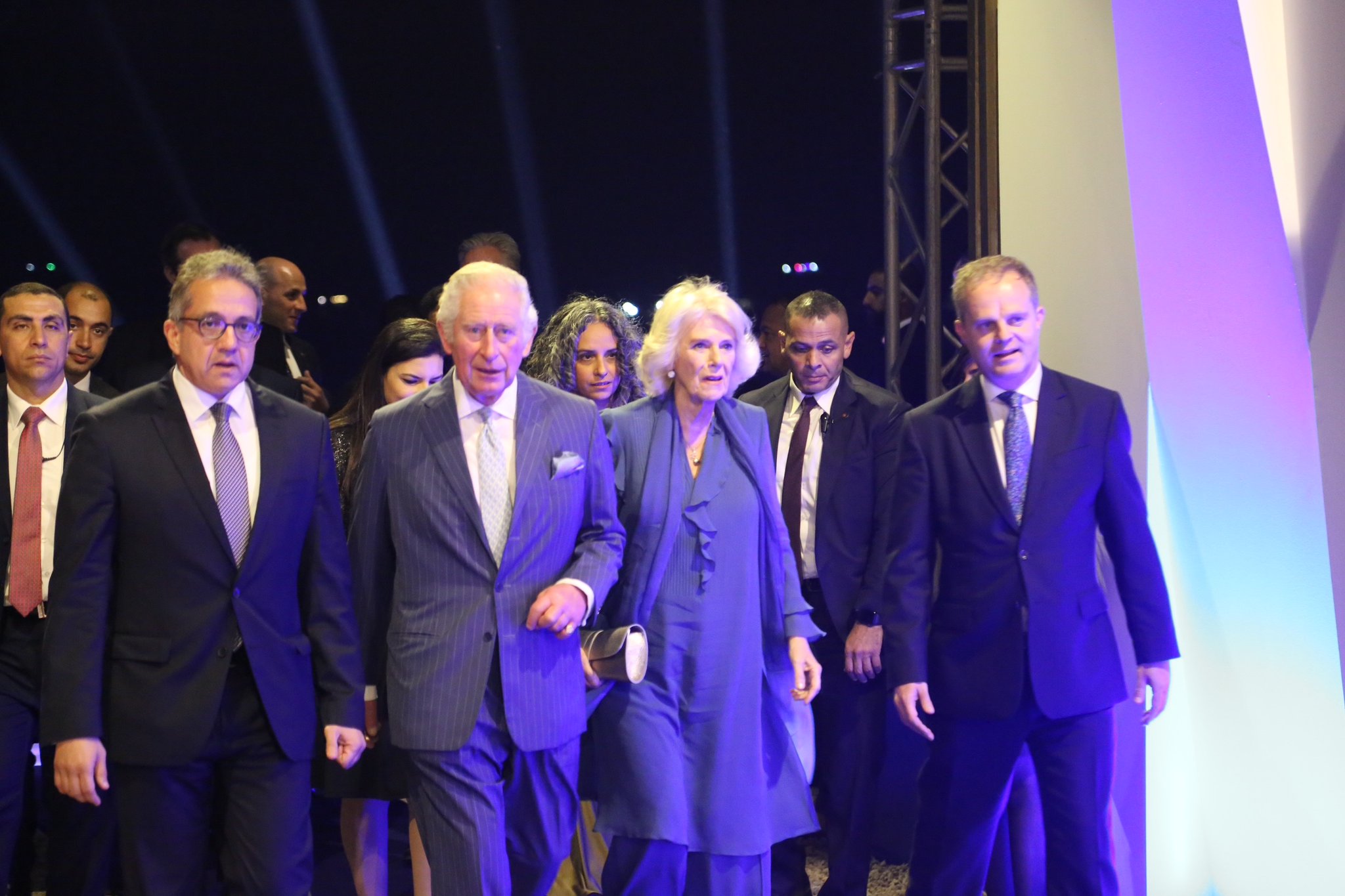 Initiating his speech with the Arabic salute “peace be upon you,” Prince Charles spoke of Egypt and voiced his pleasure to visit it again 15 years after his last visit, recalling the famous Egyptian folk saying that whoever drinks the water of the Nile must return to it again. 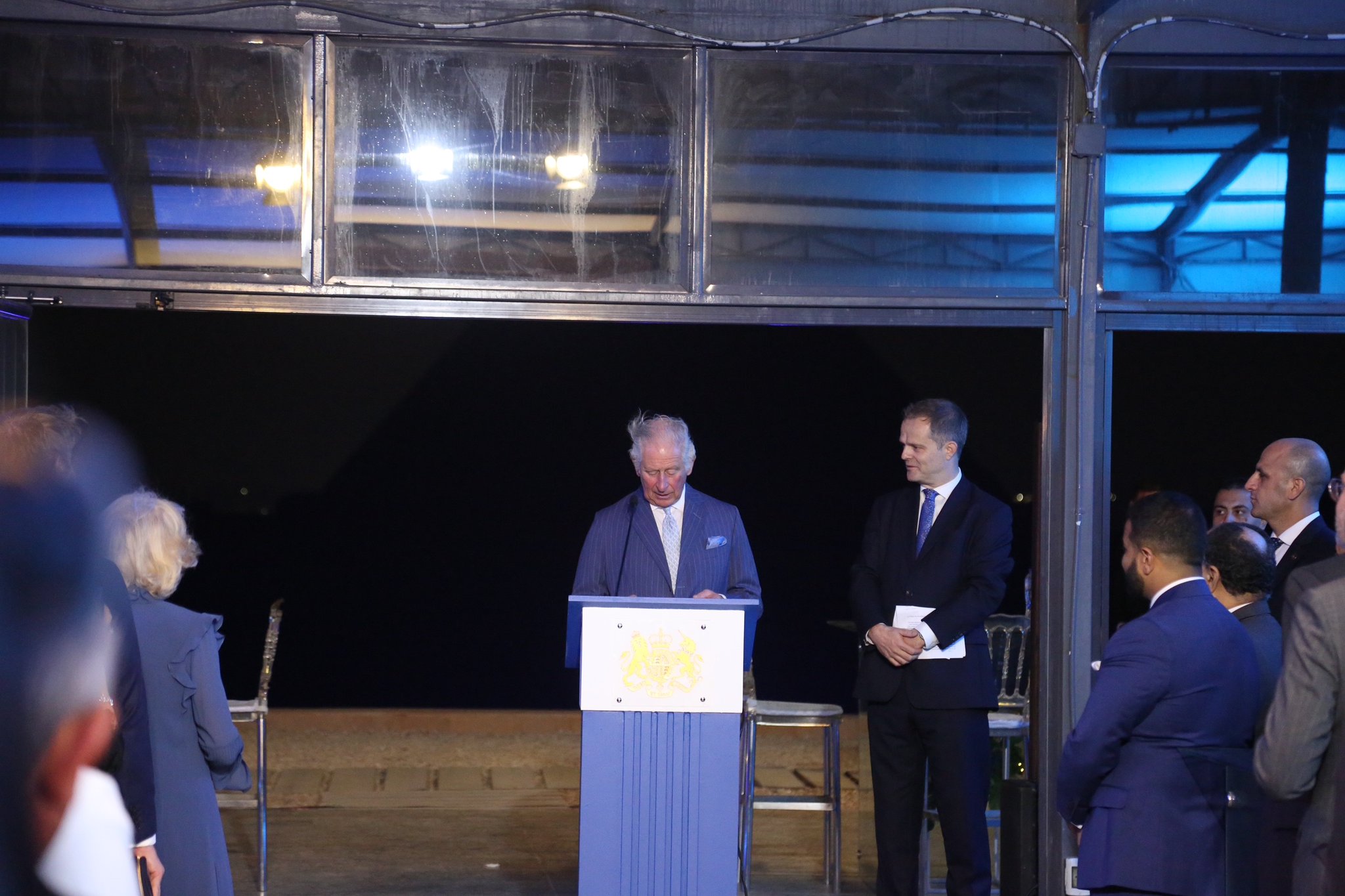 “I know that Egypt is on the front line of urgent climate change,” he said. “As President Sisi steps forward to take on the Presidency of COP27 the UK will be with Egypt as your friend and partner in this epic struggle to protect and restore our environment, and to build a better future for us all.”

The Brooke Hospital … a brilliant history in treating sick animals