As Copts in Egypt celebrated the Feast of the Resurrection on Sunday 28 April, the Cabinet’s media centre issued a statement that focused on the situation of churches and church-affiliated buildings in the country. The statement said the State was keen on rooting values of full citizenship rights, freedom of worship, and equality among all Egyptians. It quoted President Abdel-Fattah al-Sisi who, in November 2018, said: “The passage of the 2016 law for building and restoring churches [the first such law in the history of Egypt] means that the State now concerns itself with building churches for its citizens, because they have the right to worship as all Egyptians do.”

The law for building and restoring churches was passed in September 2016, and stipulated that existing de-facto unlicensed churches and affiliated buildings should be granted legality by a special Cabinet committee, provided they were structurally sound, complied with civil defence provisions, and paid the required dues.

The Cabinet committee was formed in January 2017 and accepted applications till September 2017, the deadline stipulated by the law. The committee then began looking into the applications and legalising de-facto churches.

The recent Cabinet statement included two infographics. The first showed the number and location of unlicensed churches or Church-affiliated buildings which were granted legality by the Cabinet committee, whereas the second displayed the State’s contribution to the building of new churches and the restoration of centuries-old churches and monasteries.

The churches and affiliated buildings so far legalised, according to the infographic, amounted to 894 in locations all over Egypt. The statement, however, did not mention that the 894 came out of a total 3730 that had applied for legality.

The second infographic showed, among several items, the number of churches built during the period between 2014 to 2019. Apart from the by-now famous Cathedral of the Nativity of Christ in Egypt’s new capital still under construction, which was officially opened by President Sisi and Pope Tawadros on 6 January 2019, six churches have been built in new towns in various spots in Egypt, and seven others are under construction. In Minya, 66 churches and affiliated buildings were granted approvals for restoration. Plots of land have also been allocated for building 35 churches in 22 new towns nationwide.

The infographic also cited the complete restoration by the State of three ancient churches and monasteries, including the Hanging Church in Old Cairo, in addition to 19 other restoration projects underway. It also cited the State efforts towards promoting religious tourism through the route taken by the Holy Family on its Biblical journey into Egypt fleeing the face of Herod the King. 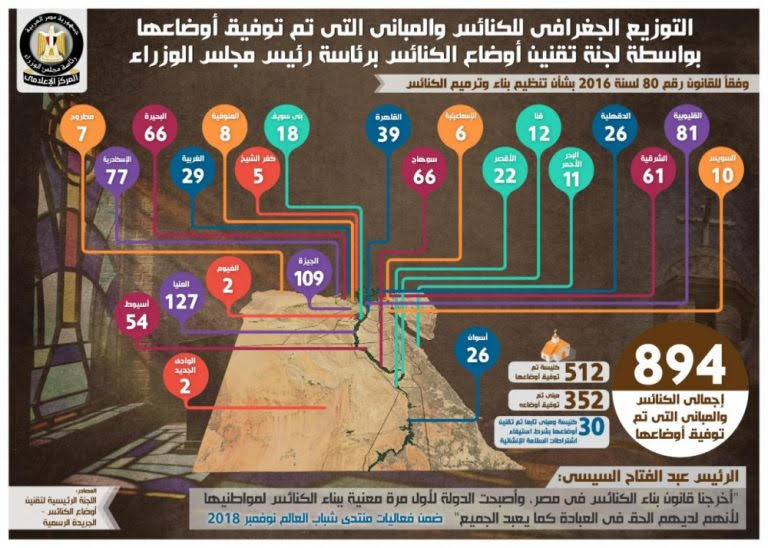 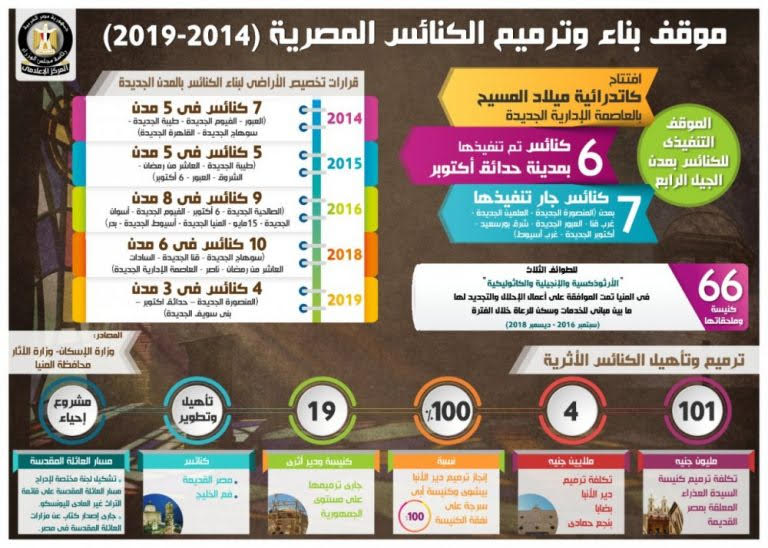