By Today, 30 June 2021, marks eight years on the 30 June Revolution in 2013 when millions of Egyptians—some put the figure at 30 million Egyptians—took to the streets nationwide to call for an end to the Islamist regime that had come to rule Egypt in the wake of the so-called Arab Spring uprising in January 2011.

The Arab Spring uprising had resulted in the stepping down of long-time President Hosny Mubarak on 18 February 2011, and handing over the country to the Armed Forces until elections could be held. The country went through perpetual upheaval accompanied by an ever escalating Islamist influence of the Muslim Brotherhood (MB) that promised to rule according to the teaching and justice of Allah. Yet their actions and decisions caused their popularity to wane as Egyptians, normally a pious people lured by religious pledges, increasingly realised that the MB promised a type of radical Islam that did not bode well..

On 30 June 2012, elections brought in Muhammad Mursi, the MB candidate, as President of Egypt; he won with a thin margin of votes. His win divided the Egyptian society into Islamists and non-Islamists and, even though the seculars peacefully accepted the election results, Egypt entered a phase of severe division as the Islamist regime worked to stifle and outlaw all opposition, and to turn Egypt into a country revolving in a pan-Islamic world order. It did not help that the economy went into a nosedive, causing tremendous suffering. All this sat very badly with Egyptians; opposition skyrocketed far beyond State control as public satisfaction plummeted further by the day.

In February 2013, a grassroots movement emerged under the name Tamarud, literally Rebellion, that called for gathering signatures to call for the stepping down of the Islamist President Mursi on 30 June, one year on his election as President. Mursi had been elected by 15 million votes; it was the goal of Tamarud to gather 15 million signatures to have him removed and call for election of a new president. By mid-June 2013 Tamarud had actually gathered 22 million signatures. 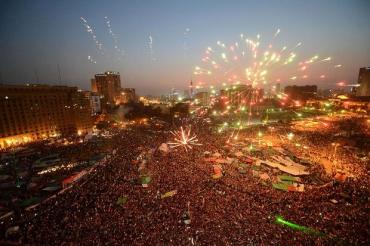 In the meantime, Mursi downplayed the opposition and belligerently persisted in his Islamist, non-democratic policies, further infuriating his opponents. Divisions in Egypt escalated, and serious fears arose that the country was on the verge of civil war.

On social media, Tamarud called upon Egyptians to go down on 30 June in peaceful protest to demand that President Mursi leaves. The call gained full public support, and millions upon millions from every part of Egypt took to the streets that day. One of Watani’s junior reporters who lives in the Cairo suburb of Shubra remembers going down to head to Tahrir Square which was to be the epicenter of the revolt, to find a dense crowd of men, women, and even children. He kept waiting for the crowd to move on, but it never did. Finally he climbed to the rooftop of a high building, only to see the crowds filling all the streets as far as his eyes could see. He understood then why the crowd was at standstill.

That was the 30 June 2013 Revolution. The rest is now history. The army gave Mursi a 48-hour ultimatum to resolve the crisis, otherwise the army would put into action a roadmap drawn to rescue Egypt form the threat of civil war. Mursi belligerently rejected the ultimatum; on 3 July Egypt’s Head of the Constitutional Court, Justice Adly Mansour was sworn in as Interim President; in January 2014 Egypt got a new Constitution and, in June 2014 Egyptians swore in as their President the man who had been Commander in Chief of the Armed Forces, Abdel-Fattah al-Sisi.

Thus began Egypt’s path towards the secular State it is today.

To commemorate the 30 June Revolution, we invite our readers to read an article by Watani’s Mervat Ayoub, posted on en.wataninet.com on 21 June 2013, which vividly portrays what went on in the country and led to the Revolution:

30 June: The day of reckoning