Q & A from the heart

“I consider meeting you here tonight as the most important event on my visit to Sydney.” This is how Pope Tawadros described his meeting with Sydney’s Coptic young people at the International Convention Centre (ICC) on 1 September 2017. “I am very, very happy to be with you tonight. This is my first visit to Australia as Pope; but my second to Sydney to which I came five years ago as Bishop-General on a very short one-day visit.”
Again, in Melbourne on 11 September, the Pope would express the same sentiments of happiness and significance attached to his meeting with youth aged 16 – 35. 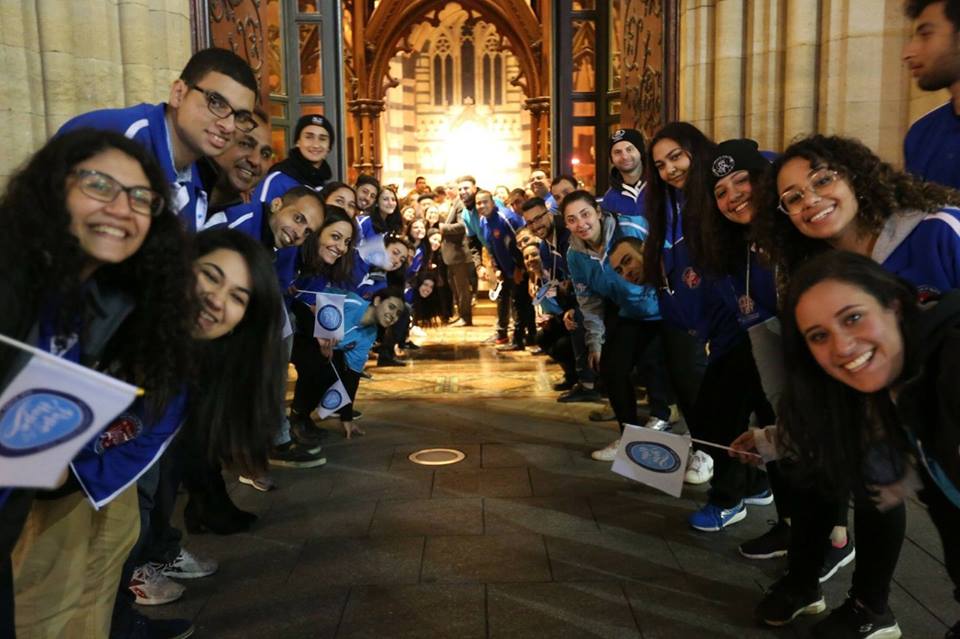 Dream for Australia
It was normal that the young Australians should start by asking the Pope about his impression of Australia and whether it had changed from the first to the second visit, also of his aspirations for the Coptic Church there. He laughed as he said that his first visit to Australia left no impression; it was too short. But this time, he said, “I was able to interact with the Copts here, and acquire a feel for the daily activities of the Church. This made me so happy.” He said the dynamism and vibrancy of the Chruch and congregation made him feel at home; the youth meeting “as though I were in a youth meeting in Egypt.”
“My aspiration for the Coptic Church here is that it would be inclusive and would play a role in preaching to others.
“The growth of the Coptic Church here is very important. The monasteries should preserve the monastic traditions we received from our ancestor fathers, and our Theological Studies should expand.
“I also have a dream for you as Coptic youth; to keep in touch with the Mother Church; visit Egypt whenever you can and learn her language.”
Pope Tawadros II talked about the importance of Egypt which, he said, represents stability in the Middle East. “We see Egypt as the mother of the world, and Australia as a very young sister.”
“But Egypt is today challenged with economic problems which affect a large portion of the population,” he said. “However, I’m sure this will be solved within a very few years, and Egypt will again shine.” 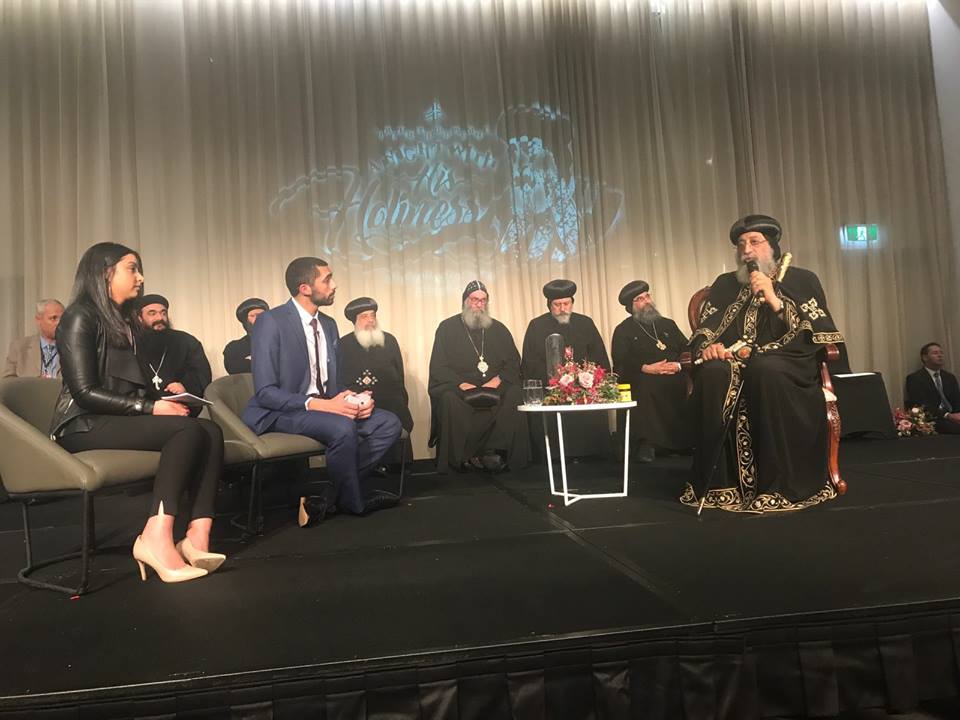 Egypt’s Coptic martyrs
Melbourne’s young Copts posed a question to Pope Tawadros about the violence against Copts in Egypt. “We read [about saints and martyrs in] the Synaxarium,” the moderator said, “but you live it. How do you handle this situation?”
“Our Church has a history replete with martyrdom since St Mark preached Christianity in Egypt in the first century,” the Pope said. “Our people have very strong faith. Despite the deep pain and the threat, they come to church in droves. After the bombings in Cairo, Alexandria and Tanta churches, the congregation attending church swelled. We have leaned to accept the pain; we pray for our Church and country, also for those who attack us.
“We all understand that the goal of the attackers is to strike our national unity. National unity is very important for us; without it Christians cannot survive in Egypt. You just have to look at what happened to the Christians of Iraq and Syria to know what I mean. Copts are the largest Christian community in the Middle East, this cannot remain so without national solidarity.
“Our Church draws strength from the blood of the martyrs, the tears of the fervent prayers of the desert fathers, and the sweat of those who toil in the ministry.” 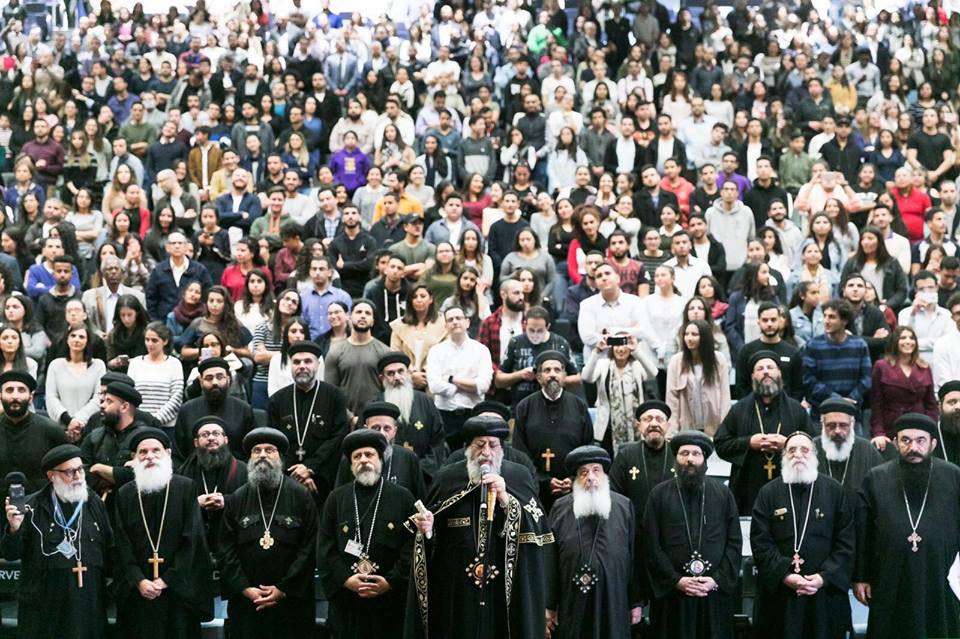 Goal: Church unity
It was normal that the dialogue would focus on the Pope’s extensive and wide-ranging work to foster ecumenical dialogue. Recounting his meetings with other Christian leaders in the last five years, Pope Tawadros emphasised the fundamental importance of ‘speaking the truth in love.’
“Christian unity according to my opinion is like the cross, it must start firstly with love, love relations with all the Churches and extended hands to all the Churches,” Pope Tawadros II said.
“We must build this love relation with all the Churches because we are one of the oldest Churches in the world. Christianity started in Egypt in the year 58 of the first century.”
He explained that the matter does not stop at meeting other Church leaders, but proceeds with diligent efforts on the front of closer coordination and better understanding. He explained that such efforts are ongoing with the Byzantine Russian Church, the Oriental Orthodox Chruches (the Coptic, Syrian, Armenian, Ethiopian, Eritrean, and Indian), the Catholic Church, the Anglican Church, and the Protestant Church. Differences are being explored, given that these differences are centuries old and that they emanated from political reasons, the translation of theological terms, and Church egoism. We are diligently trying to understand and overcome the differences and, at the same time, working to unify whatever we can, such as the dates of clebrating the Feasts of the Nativity and Reseurrection in the various Churches. We hope one day we would reach Church unity; please pray for that because it is no easy matter. But everything is possible through the power of prayer. 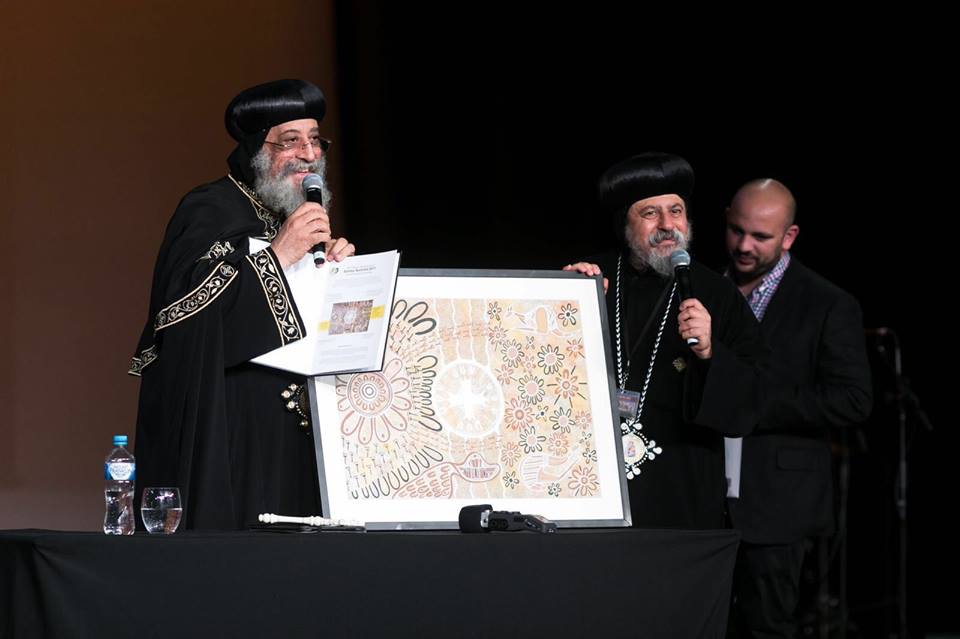 Same-sex marriage
When asked about same-sex marriage, ahead of the national Australian plebiscite on the issue, Pope Tawadros replied that Christians should live according to the teachings of the Holy Bible.
“Fight for what is right in your community and your lives. In each community, there are positives and negatives. Select what is positive and reject the negative.
“According to the Holy Bible, either the Old Testament or New Testament, there is no—none at all—same-sex marriage. Therefore, this marriage is completely rejected by Christian faith.”
“Homosexuality may be a disease or a sin. If it is a disease, it needs a cure; if a sin, it needs repentance. Some of you may think it’s a genetic problem. So far, I think there has been no conclusive proof that it is genetic.
“So, I advise you to read the Holy Bible. Keep yourselves, your minds, and your lives away from sin. It is very important to fight for what is right.”

In the hands of God
The Melbourne youth asked the Pope to specifically talk about his life history. The Pope spoke of his upbringing close to the Church, losing his father at age 15, his memorable spiritual guides, going into the ministry of Sunday School, taking orders, being consecrated Bishop and, finally enthroned as Pope. To a question on how he felt about having to return to the world with all its struggles after he had renounced it completely when he took orders, he replied that by taking orders he had placed all his life in the hands of God. It was God who shouldered him with the great responsibility of being Pope, and it is God who gives never-ending support.