Blessed are the peacemakers

Salemo: an initiative to promote peace among Egypt’s Muslims and Copts

The peace greeting: “Peace be upon you”, “Peace to you” or simply “Peace!” is very common among Egyptians. Yet, sadly, peace is not the predominant sentiment or condition that governs relations between Egypt’s Muslims and Copts in many of Egypt’s villages, especially in the South where fundamentalism and fanaticism are rampant. If sectarian incidents are any measure to go by, peace between Muslims and Copts is deplorably lacking in not a few rural areas.

With this in mind, the Coptic Orthodox Church’s Bishopric of Public, Social, and Ecumenical Services decided to join hands with the Ministry of [Islamic] Endowments (Awqaf) and Diaconia, the international development organisation of two Swedish Churches, to launch a two-year programme, Salemo Gamee al-Nass (Make Peace with Everyone), Salemo for short, in three of Egypt’s governorates: Cairo, Qalyubiya, and Assiut. Salemo is literal for “Be at peace” or “Live peaceably”, and was said by Jesus Christ: “Be at peace with one another” (Mark 9: 50); and by St Paul in his Epistle to the Romans 12: 18 “Live peaceably with all men”.

The programme aims at identifying the problems which stand in the way of social peace in Egypt, and attempting to resolve them.

The launching ceremony for Salemo was held on 26 February 2019 at a hotel east of Cairo. Participating was Anba Yulius, Bishop-General of Old Cairo Churches, and head of the Bishopric of Public, Social, and Ecumenical Services; Sheikh Gaber Youssef, first deputy to Awqaf Minister; Coptic and Muslim clergy; politicians; educators, most of whom came from the Ministry of Education; NGO representatives; as well as intellectuals and media persons. 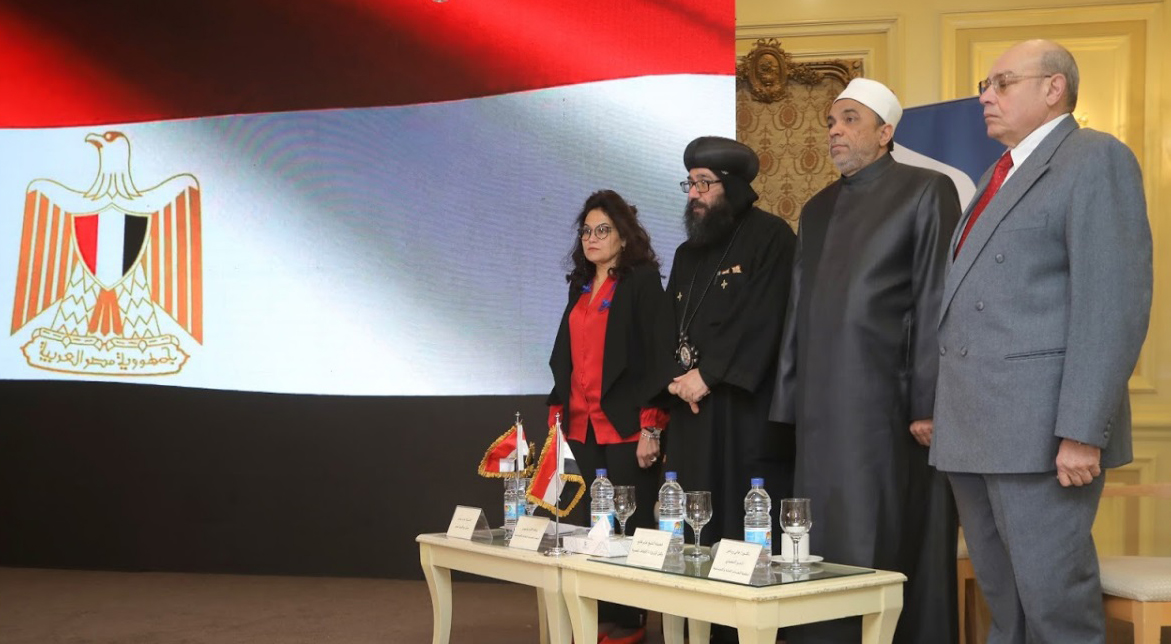 The event started with the Egyptian national anthem followed by a documentary on peace in Egypt. Evelyn Boutros, director of Salemo initiative, gave a welcome address. Ms Boutros said that the title of the event, “Be at peace with all men”, mirrored hope that Egyptians would achieve a unified goal, peace, through rooting the concepts of love, brotherhood, tolerance, and common values. 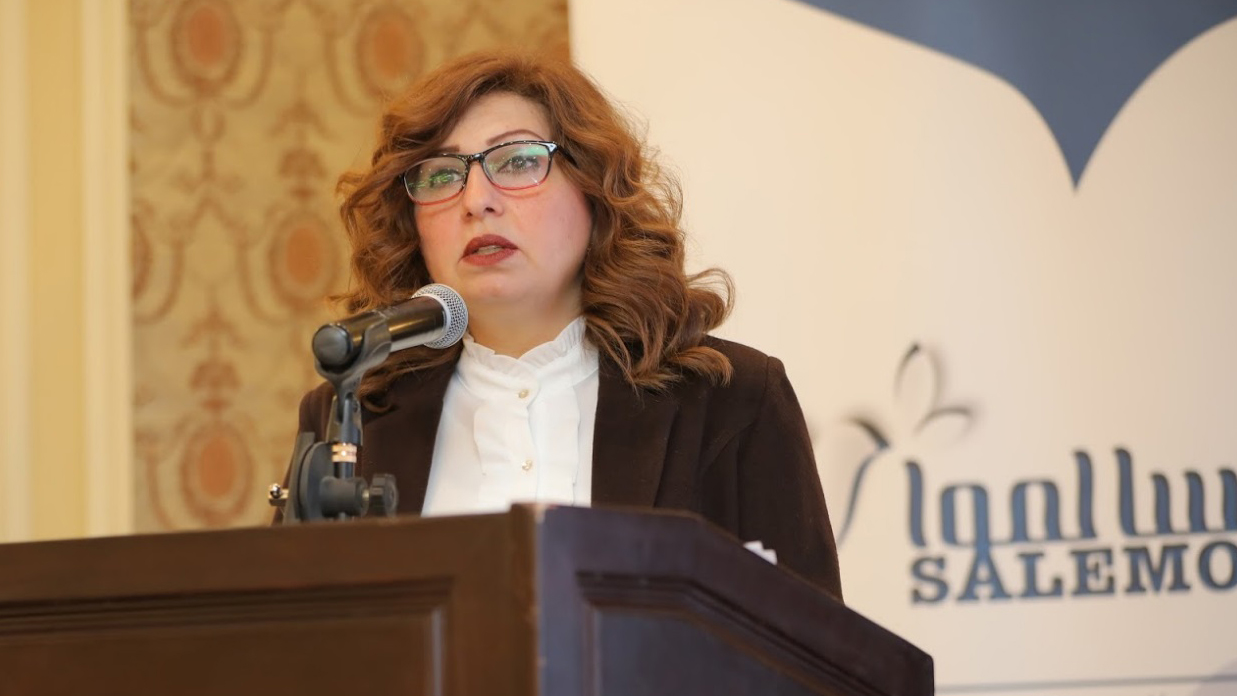 The Church was thus teaming with the Awqaf Ministry, Ms Boutros said, to launch a societal initiative in Egypt’s religious, social, and educational institutions to spread a culture of living peaceably and accepting the different other. This, she said, would be implemented through the media and civil society partners, to reach a general commitment to diversity, plurality, and the rights and freedom this entails.

“We base our work on a number of principles major among which are respect for human dignity and rights, freedom of belief and worship, dialogue as the means to interact and resolve problems, rejection of  everything that leads to violence or discrimination, and embracing conciliation and social peace.”

Sheikh Youssef gave a word in which he stressed that the initiative was being launched to uphold compatible citizenship so as to realise the concept of equality among all people in rights and duties, highlighting thus the values of tolerance and peace in all heavenly religions. Awqaf Ministry, he said, has published a book titled “Protecting Churches is a Religious and Patriotic Duty”. 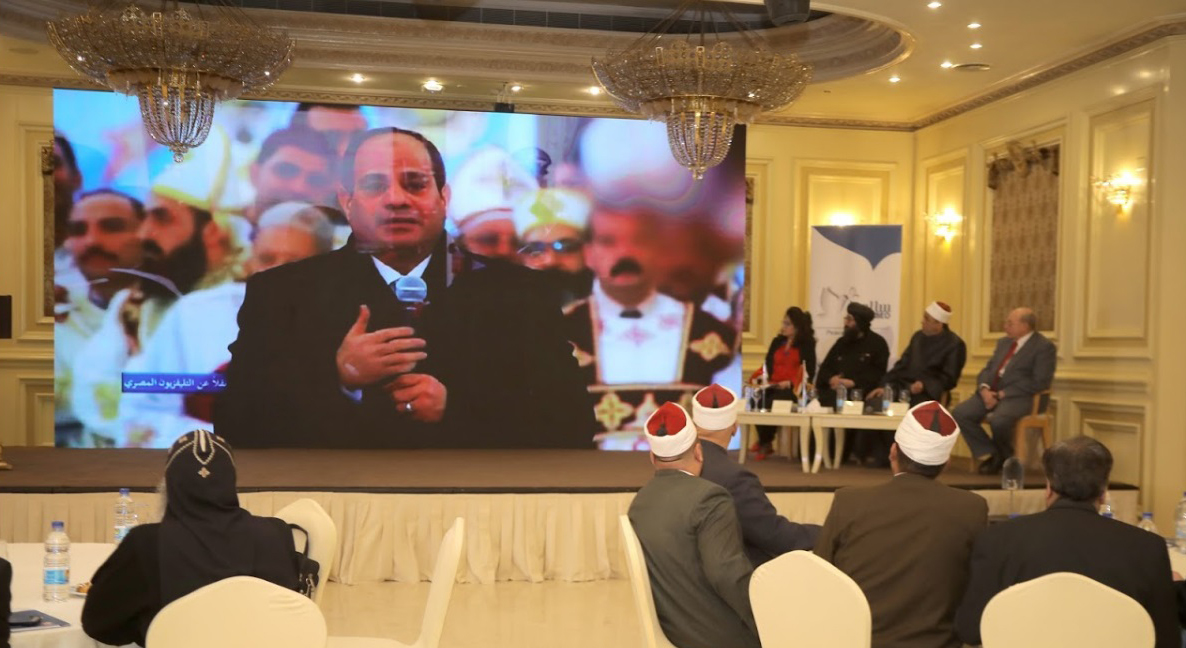 Sheikh Youssef related a personal story which the audience loved. “As a child in Luxor, I was tagging behind my mother as she walked with a neighbour to the market. They were arguing about something, and my mother started swearing to prove her point. At that moment we passed by a church; my mother uncovered her head and swore ‘by this house of God’ that she was true to her word. Since that day, I always knew churches as ‘houses of God’.”

Anba Yulius expressed his gratitude to all present, saying their participation proved how significant the peace programme was for all Egypt.

“Blessed are the peacemakers for they shall be called the children of God”. With that Bible verse, Anba Yulius began his word. “But Peace is an industry which, like all industries, requires effort and dedication,” he said. “Peace will not come merely because we pray for it; we need to work hard to achieve it.” He thanked Diaconia for their great work with the ideas that helped make Salemo a reality, and for their continuous support. 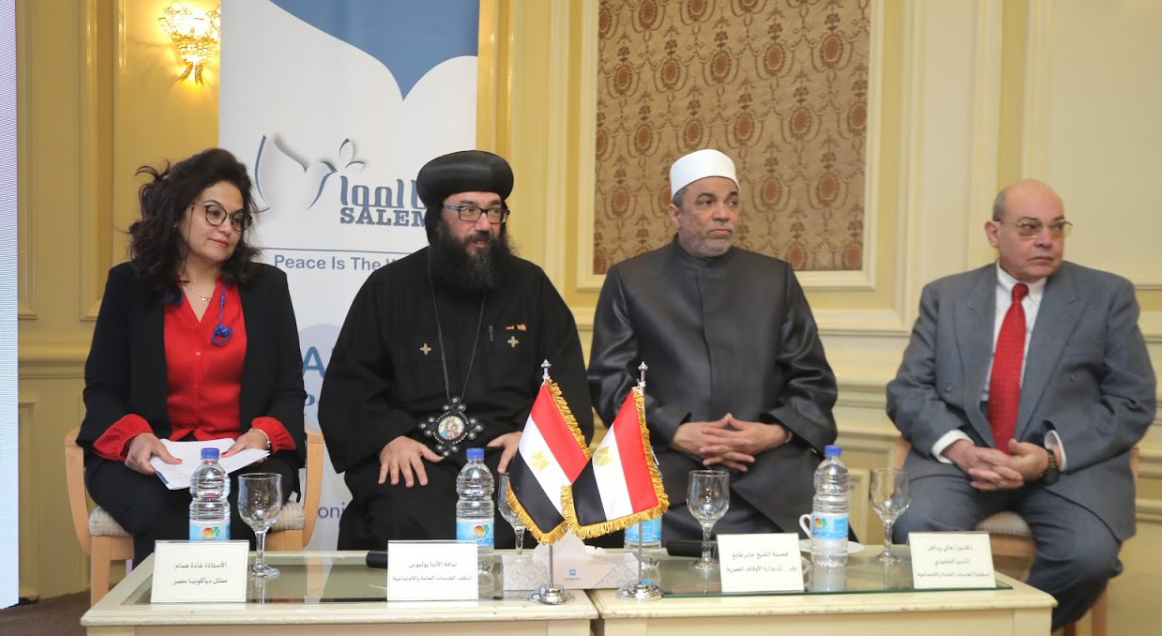 “Egypt already has Bait al-Aila, literally the Family Home, a joint endeavour between the Coptic Church and the venerable Islamic institution of al-Azhar, which works to resolve sectarian conflict. Salemo, however, aims at working with the grassroots so that such conflict does not arise in the first place.

“We desire to create a healthy community where peace reigns as a concept, thought, and viable option.”

“We decided,” Anba Yulius said, “to start with children and women. Children are the future, and women as mothers are pivotal in building their children’s characters and outlooks. We target children in schools, and mothers at home. We thus need all the help and support we can get from the media, religious preachers and ministers, and civil society organisations.”

Anba Yulius explained that the peace project would be implemented in Assiut, Qalyubiya, and Cairo, under strict monitoring, and will be assessed after two years, so that it may be launched in other places in Egypt. 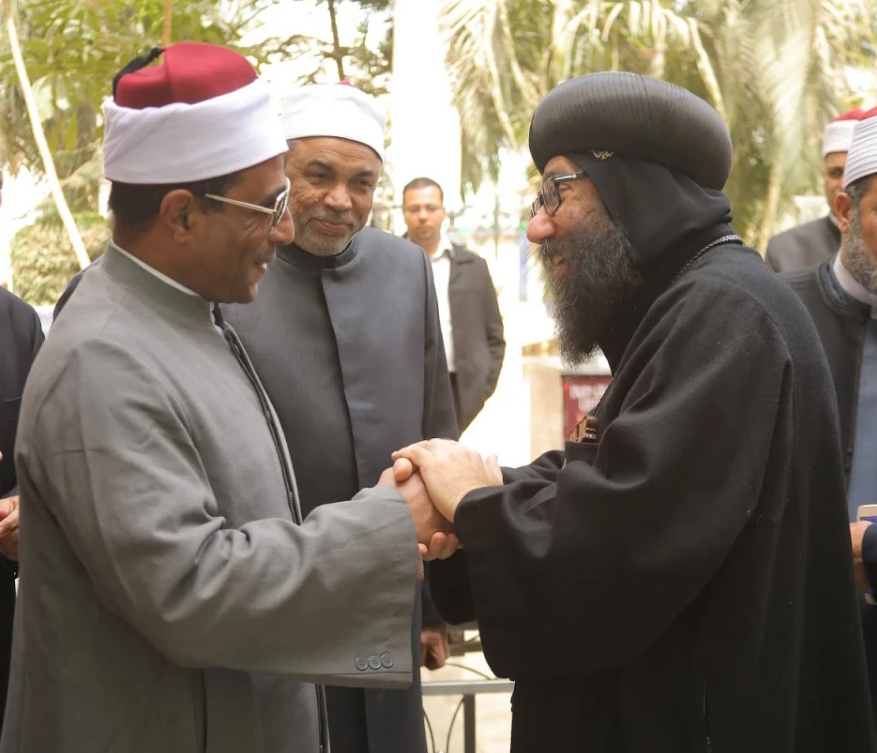 “Peace,” Anba Yulius said, “can only be based on equality. Only when we succeed in rooting the concept of equality in the three governorates we are targeting can we say the initiative has been a success. But nothing can be achieved by the Bishopric alone. We need the concerted efforts of Muslim and Coptic clergy; preachers and ministers; educators and media persons to achieve our goal.”

Apart from equality, Anba Yulius said, peace requires social balance which can only be achieved through the help of civil society organisations. And last, he said, faithfulness to the mission of peace is the prerequisite for Salemo to succeed.

Hany Riad, executive manager of the Bishopric of Public, Social, and Ecumenical Services gave the audience a brief on the history and activity of the Bishopric. Dr Riad said the Bishopric started out in 1965 to help the poor, but took on health services and development work in the 1980s. Since 2015, he said, the scope of work expanded to the comprehensive development of communities. “We now work with 45 marginalised communities, serving some 5,000 beneficiaries in the poorest villages and hamlets. We work with the government and local partners, offering health and education services, as well as economic development. We usually remain for about five years with a specific community. Some 445 men and women from various churches volunteer for this work.

“In any given community,” Dr Riad said, “we work to promote among people the will to change; we then pursue it to help the community move to a better life.” 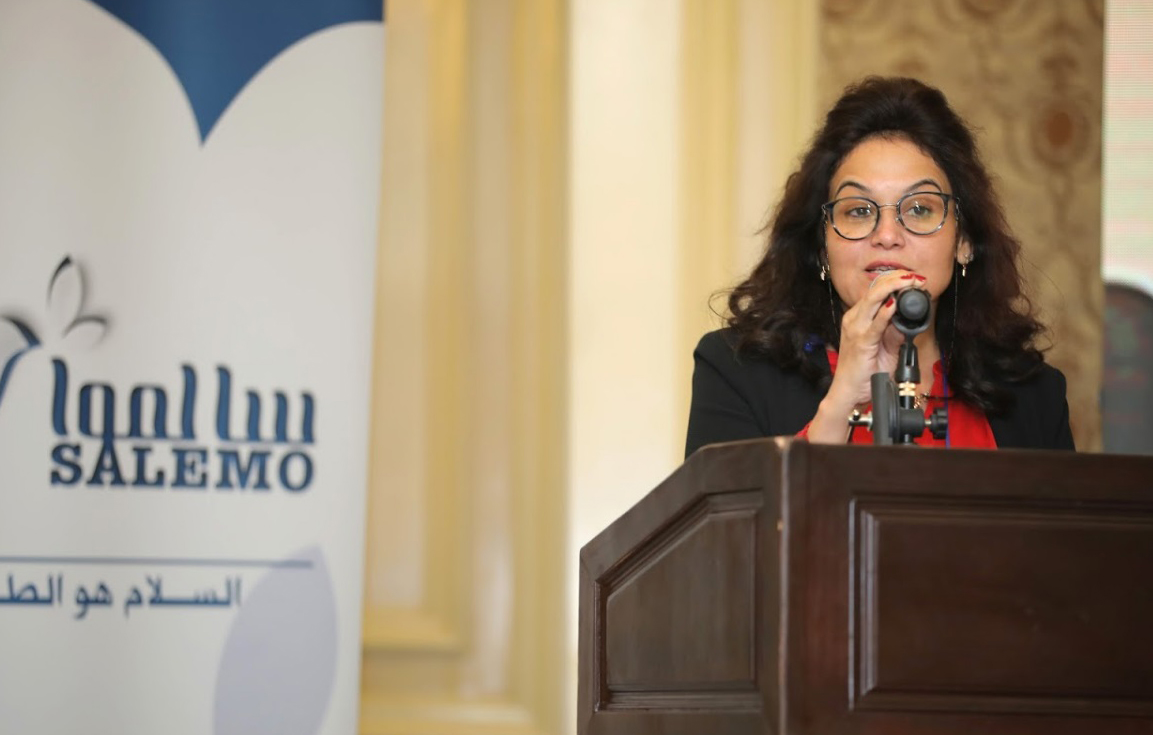 It was then the turn of Ghada Hammam, Diaconia representative in Egypt to speak. Ms Hammam thanked Pope Tawadros and the Minister of Endowments Muhammad Mukhtar Gomaa for supporting Salemo, also Anba Yulius and Sheikh Youssef for endorsing it, and above all President Sisi for his call to renew the [Islamic] religious address. “Salemo will work with women and children,” she said, “to reject extremist religious thought and violence.”

Only thus, obviously, can peace be attained.