Whereas the story of the flight of the Holy Family—the Child Jesus, His mother Mary, and St Joseph—into Egypt is explicitly mentioned in the second chapter of the Gospel of Matthew, the Bible gives no details of that flight. It says that Herod the King sought to destroy the Child Jesus, so God’s command came to St Joseph to “take the Child and His mother and flee into Egypt, and stay there till I tell you.”

When Herod dies, God commands St Joseph to take them back to the land of Israel. The gap between entering Egypt and departing it to go back home is filled by local tradition. Yet this tradition is known by very few outside Egypt. The Coptic Church marks the date 24 Pashons (Bashans), which coincides with 1 June, as the Feast of the Entry of the Holy Family into Egypt, a glorious feast for Copts.

Tradition of a simple family

Steeped in tradition, the journey of the Holy Family into Egypt is well charted, backed by historical documents and manuscripts. The traditional icon that depicts the flight into Egypt shows the Holy Virgin tenderly holding Baby Jesus as they ride a donkey led by St Joseph, or as they sail the Nile. 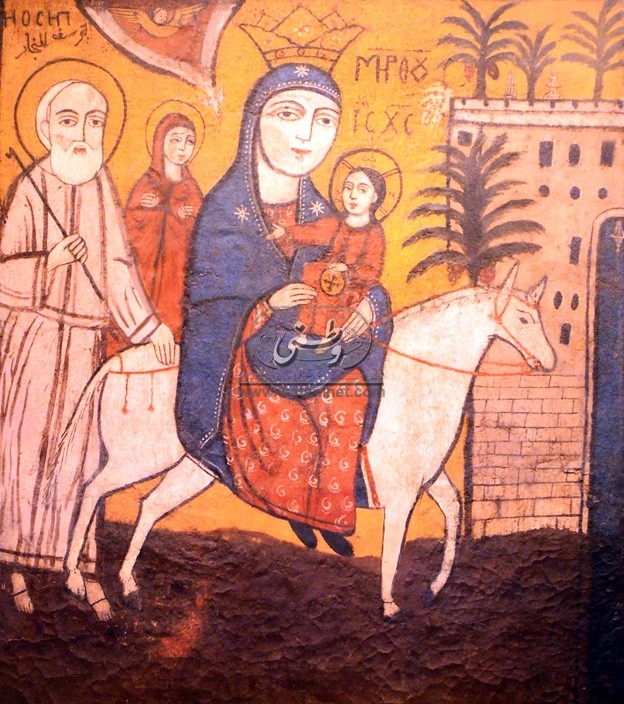 Coming from the historical land of Israel, the Holy Family entered Egypt from its northeast outpost of what is today Rafah, travelled southwest till the Nile Delta and the Western Desert, then south east to present-day Cairo and further south till Assiut, some 350km south of Cairo. There they spent the longest interval in their journey. When St Joseph was ordered to take the young Child and His mother back to Israel, the Family took a return trip north on a slightly different path. Their sojourn in Egypt, which lasted some three years, extended over 3,500km, 31 sites, eight caves or grottos, 18 water springs or wells, and 13 trees. Today, churches or monasteries stand on these sites which Egyptians see as sources of palpable blessing.

Tradition tells of time-honoured miracles worked by the Holy Family, also of everyday tales of the poor nondescript ‘parents’ with the Baby in a strange land. Here, they stop to rest under the shade of a tree…there, the young mother gives Baby a bath…elsewhere she bakes bread for her family.

Egyptians celebrate the Holy Family on their land as the family that was ‘your next-door neighbour’ sharing your everyday experiences in a closeness that makes for a real, living connection defying time and space.

What proof do you have?

With this gem of a heritage known to very few outside Egypt, the country has decided to familiarise the world with it, and invite everyone to come to Egypt for pilgrimage to these wondrous sites and amazing blessings.

On the ground, it was the Ministry of Tourism that, at the outset of the second millennium, endorsed the trail of the Holy Family in Egypt as a destination for religious and cultural tourism. The Coptic Church totally cooperated in that respect.

According to Nader Girgis, Coordinator of the Tourism Ministry’s Committee for Reviving the Holy Family Trip in Egypt, when talks started in 2011 with the Catholic Church to endorse the Holy Family trail in Egypt as a religious destination, they got nowhere. “No one recognised our version of the Flight of the Holy Family to Egypt; they were unfamiliar with the tradition. 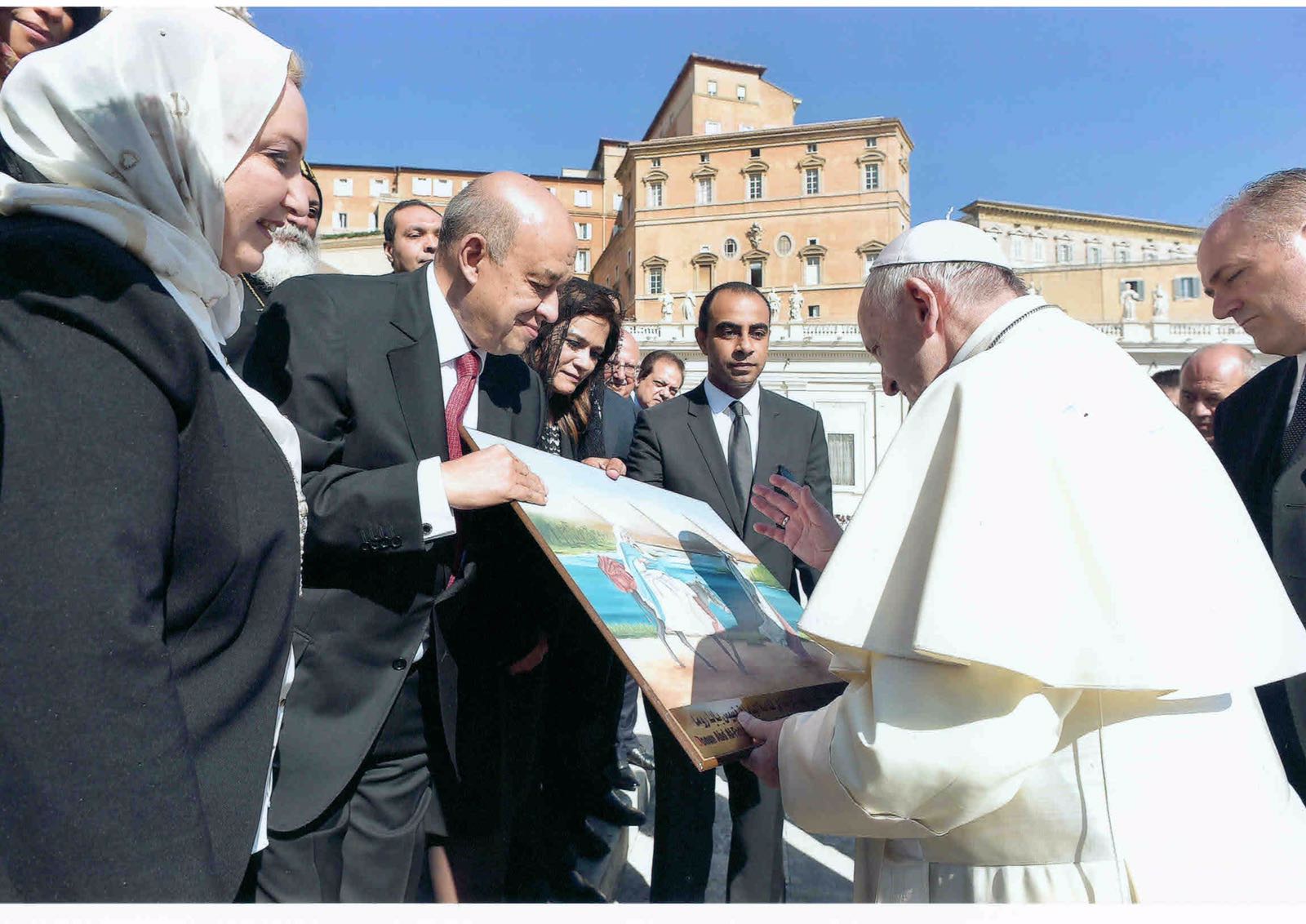 “In May 2016, Yehia Rashed became Egypt’s Minister of Tourism, a post he held till January 2018. He was assigned with prioritising the Holy Family pilgrimage project with the Vatican. Less than a week in office, he headed to Rome to broach the topic with the relevant officials. “When he asked why they wouldn’t recognise the Holy Family Trail in Egypt, the reply was that there was no historical proof to Egypt’s claims about it; it could be, after all, no more than popular folklore.”

Back in Egypt, Mr Rashed rushed to meet Pope Tawadros and told him of the predicament. “How can you prove what you claim about the Holy Family’s history in Egypt?” he said.

Pope Tawadros assigned the matter to the Institute of Coptic Studies, asking them to compile all documents, manuscripts and facts that prove that the Holy Family spent more than three years in Egypt, and how and where they stayed. “This task was achieved,” Mr Girgis said, “and the historical facts were collected from manuscripts and documents of the Coptic Church, documents written by western clergy, and research done by international institutes and universities. 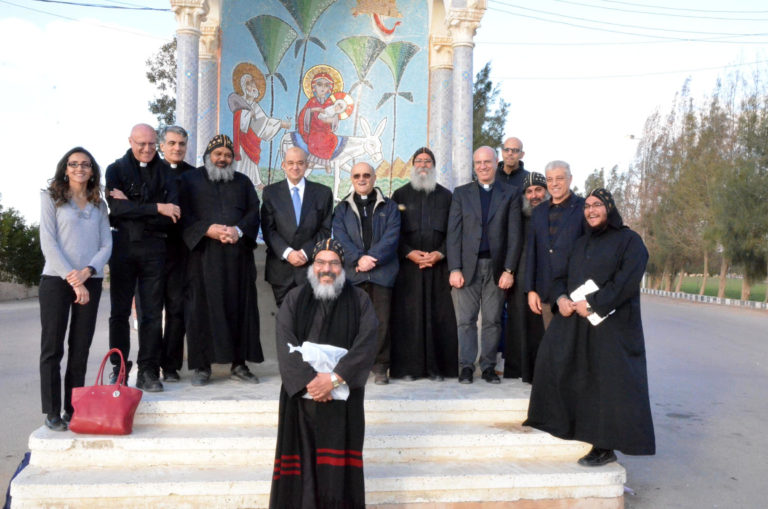 “A Vatican delegation came to explore the sites … We handed them the data compiled, and discussed with them the pilgrimage project. They visited the sites and were amazed at their beauty and the spirituality they evoked, and moved by the living faith still practised in them.”

In October 2017, Pope Francis blessed the icon of the Holy Family in Egypt, placing it thus as a viable pilgrimage destination.

Egyptian tourism authorities are working to extend world-class infrastructure to the sites on the Holy Family trail in Egypt, in order to develop them to comfortably receive tourists, and place them on the global religious tourism map.

In the most recent contribution to raise worldwide awareness of the trail of the Holy Family in Egypt, a new book has been published and a documentary produced by the Coptic Orthodox convent of Mar-Girgis (St George) in old Cairo.

Intended as cultural and tourist guides for Egyptians and non-Egyptians alike, both the book and documentary have been produced in six languages translated from the original Arabic: English, French, German, Italian, Russian, and Spanish.

To launch the book and documentary, an event was held on 7 November 2020 at Anba Rweiss Theatre on St Mark Cathedral grounds in Abbassiya, Cairo. Pope Tawadros II opened the event which was attended by a number of Cabinet ministers, ambassadors, governors, high ranking State officials, as well as bishops and priests.

Anba Danial, Bishop of Maadi and Secretary-General of the Coptic Orthodox Holy Synod, started by welcoming the guests: Minister of Tourism and Antiquities, Khaled al-Anani who represented Prime Minister Mostafa Madbouly; Minister of Emigration and Expatriate Egyptians, Nabila Makram; as well as the ambassadors and the representatives of other Churches; also all the attendees.

He went on to thank the convent of Mar-Girgis for the considerable dedicated work that went into the book and documentary which, he said, go a long way to complement the official tourist project. “The Holy Family trail in Egypt,” Anba Danial said, “is a pilgrimage destination no less than the Church of the Holy Sepulchre in Jerusalem. 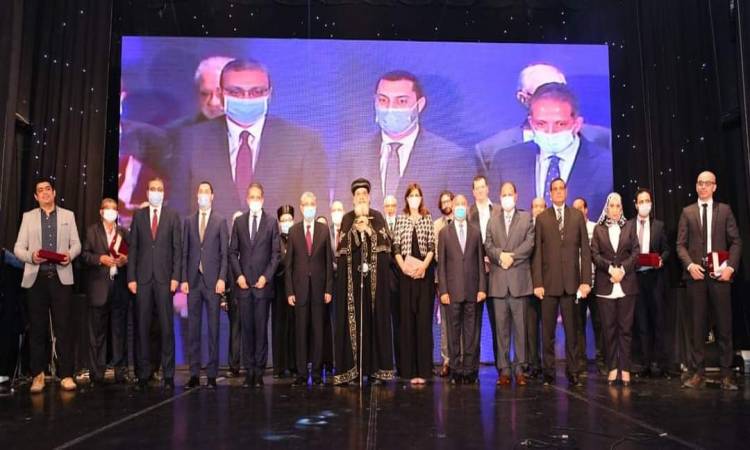 “Pope Tawadros,” he noted, “always speaks of the River Nile as the life giving artery that runs the length of Egypt. The book and film show that that artery is not only physically life giving, but carries spiritual life too to those on its banks.”

Dr Anani, representing the Prime Minister, said he was honoured to be attending that event which focused on a topic close to his heart, and which he had been following in his capacity as Cabinet Minister since 2016. 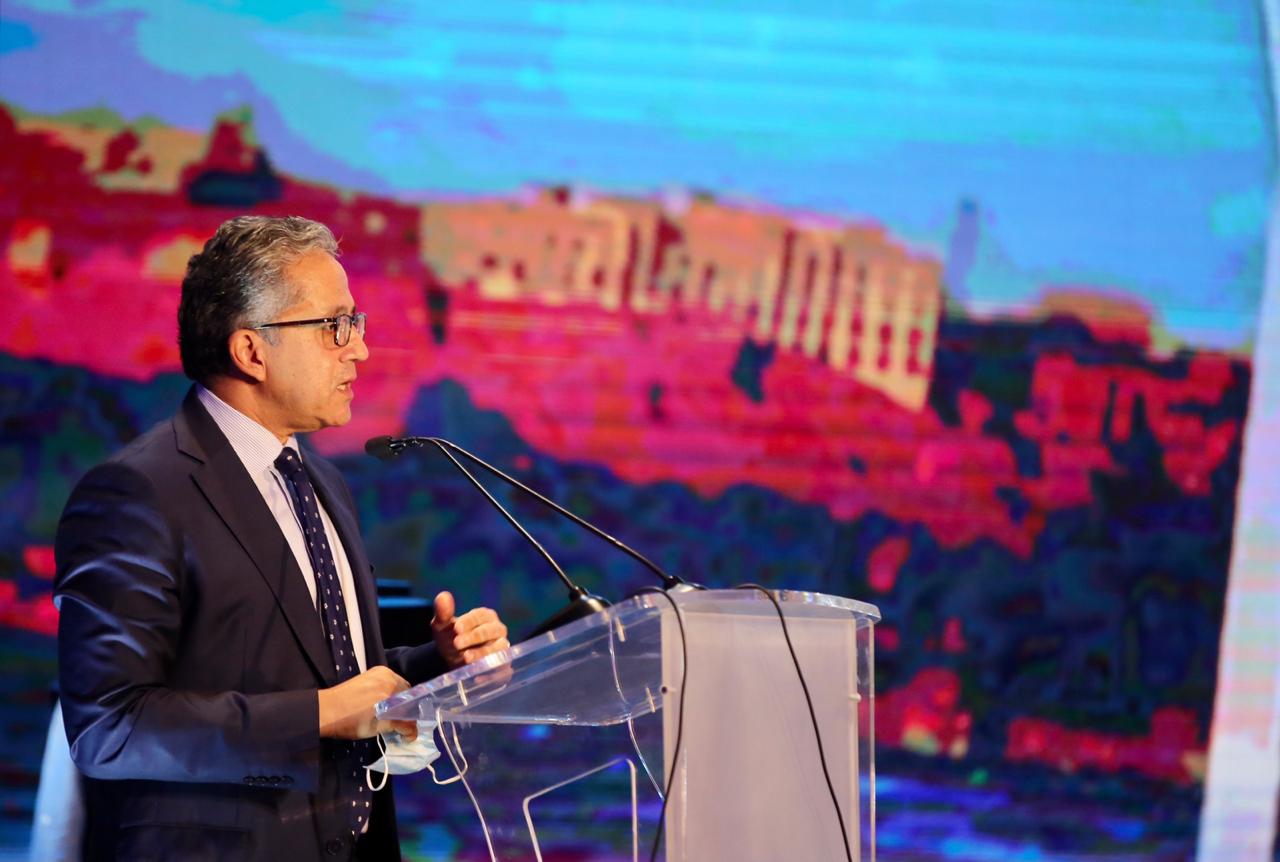 He highly praised the documentary produced by Mar-Girgis convent, saying the Ministry would be using it to promote the Holy Family trail in Egypt, noting that no other country in the world enjoys such a blessing.

“Apart from its touristic value,” Dr Anani said, “the documentary is an invaluable means of spreading awareness of the Holy Family’s journey in Egypt, not only to Christian children but also to Muslim children who should learn what an exceptional blessing was bestowed on their land.”

The Minister detailed government efforts to restore and develop the sites on the trail, citing as examples the restoration of the early Christian century churches of Abu-Serga in Old Cairo, St Abanoub in the east Delta town of Samanoud, the Holy Virgin in Gabal al-Teir in Minya some 250km south of Cairo, and Muharraq Monastery in Assiut some 350km south of Cairo, also numerous monasteries throughout Egypt. 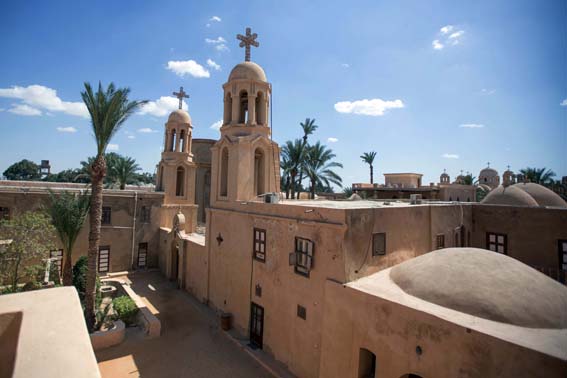 “In order for sites on the trail to be prepared to receive tourists,” Dr Anani said, “we started by equipping them with adequate infrastructure, safe roads replete with guideposts and services, and hotels. More important, local populations have been made aware of and invited to be partners in the development and touristic efforts.”

Dr Anani spoke of the government’s effort to have the Holy Family Trail in Egypt and all its attendant traditions and celebrations listed on UNESCO’s tangible and intangible heritage lists. “We have presented that file to Pope Tawadros,” he said, “for revision, and viewpoints. Once done, Egypt will present it to UNESCO.”

Pope Tawadros gave a speech which he started with a warm welcome to the guests. 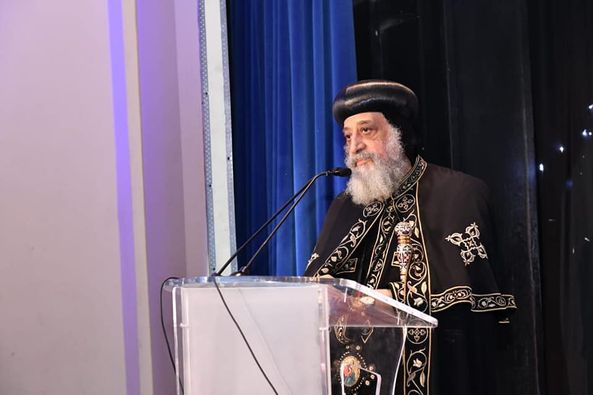 The Pope spoke of the Coptic Orthodox Church which was founded by St Mark the Apostle in 60 – 68AD, but which was years earlier based on Jesus Christ Himself when He came to Egypt as a child with the Holy Virgin and St Joseph. “We Egyptians have been blessed since Jesus Christ chose our land of Egypt as a refuge from the face of evil, thereby blessing it with His immeasurable grace,” the Pope said. 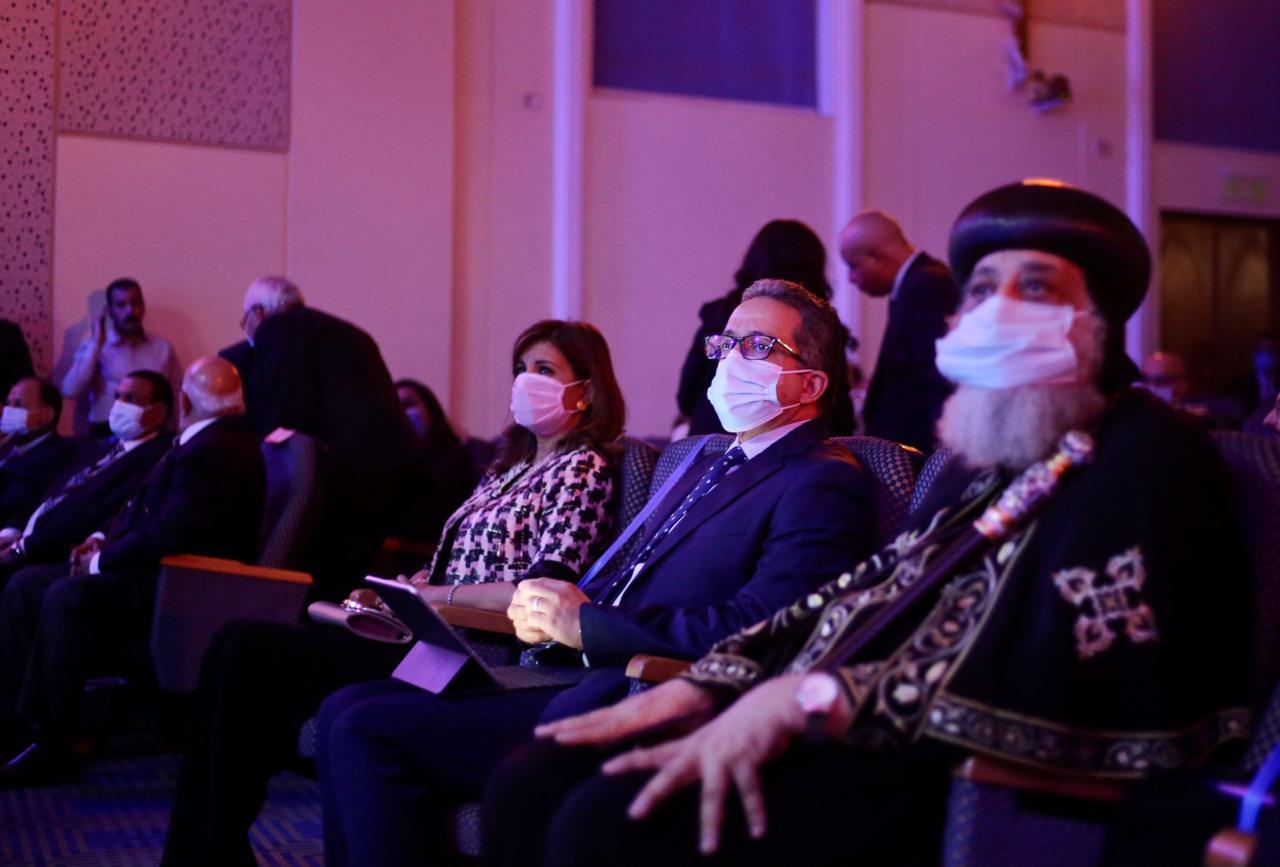 The Pope thanked the nuns of the convent of St George, and the Abbess, Tamav Tekla, for the huge effort that went into producing the book and documentary. That effort, he said, was but one in a long list of perennial efforts by monasteries and convents in Egypt to conduct scholarly works and to jealously guard and preserve heritage. This, he said, was in addition to the tradition of Christian monasticism that started with St Anthony the Great in Egypt’s Eastern Desert, and spread through the entire world, giving peace and comfort.

Pope Tawadros saluted all Egyptian officials who sponsored the project of the Holy Family trail in Egypt, starting with President Sisi, PM Madbouly, and Dr Anani.

The book and the documentary

Massaar al-Aila al-Muqadassa fi Misr (Trail of the Holy Family in Egypt), the 119-A4-page book published by the convent of Mar-Girgis, is rich in stunning photographs, and relies on two sources of reference: manuscripts and historical writings. Among these are five well-known homilies or discourses by the Coptic Pope Theophilos and Byzantine Patriarch John Chrysostom, both from the 4th century; 5th century Pope Timotheus; and the two 7th century bishops Anba Zacharias of Sakha, and Anba Kiriakos of Bahnassa. The book also cites testimonies of travellers throughout the ages. It mentions non-Coptic landmarks on the trail, be they Pharaonic, Greco-Roman, or Islamic.

According to Wagdy Ghali, editor of the English and French language versions of the book, the text was meticulously revised and re-revised to ensure accuracy. Mr Ghali said the book was a brief of a much larger encyclopaedic work the Mar-Girgis Convent is working on.

As to the remarkable documentary, Massaar al-Aila al-Muqadassa fi Misr (Trail of the Holy Family in Egypt), it is directed by Peter Mimi, with Arabic voiceover by the widely loved Coptic actor Maged al-Kedwani; versions of the documentary carry voiceovers in the six languages. The content was compiled from impressive footage filmed by Gamil Latif, consultant of cinema and TV filming, who told Watani that, being privileged to serve at Mar-Girgis’s, he heard of the book project and directly volunteered to do the photography and filming needed. He said that, despite the gruelling effort he exerted, given that many of the sites were not easily accessible—some could not be reached by any familiar means of transport, the journey carried indescribable blessings. 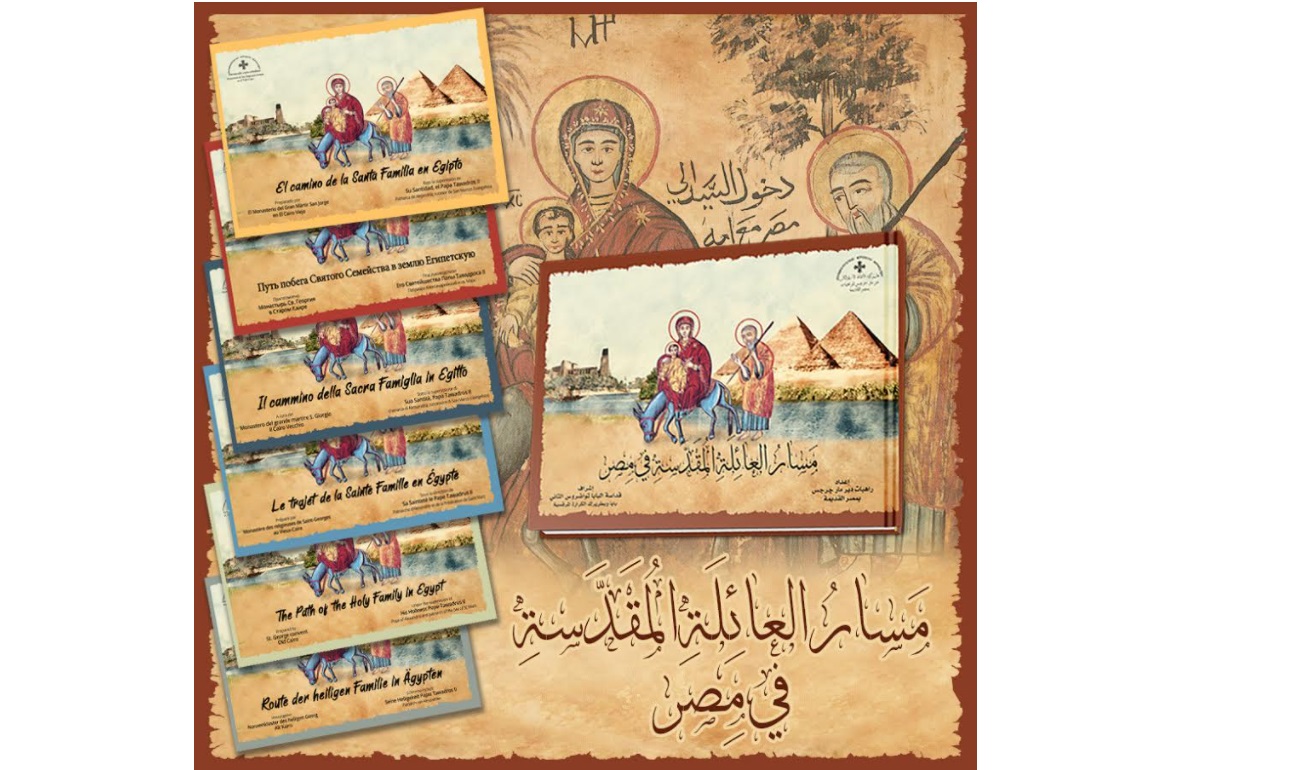 “If any country in the world possessed but one stone of that sacred heritage,” Mr Latif said, “it would have been found worthy of global attention. Egypt possesses an unsurpassed wealth of such heritage, and is hence poised to show the world the vestiges of the honour it was given when the Lord of Lords took refuge in its land.”