Saturday 6 March and Sunday 7 March 2020 witnessed a long awaited event take place at the Cathedral of the Nativity of Christ in Egypt’s new New Administrative Capital, some 40km northeast Cairo. During the Raising of Incense Vespers service on Saturday and Mass the following morning, and in presence of the metropolitans and bishops of the Holy Synod, Pope Tawadros II consecrated seven new bishops, and announced that two existing general bishops would be seated as diocesan bishop and abbot. 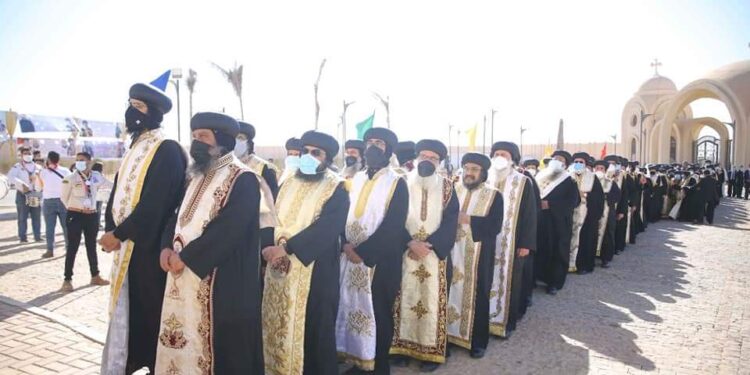 Anba Macarius who was Bishop-General of Minya and Abu-Qurqas, was called to be seated Bishop of Minya and its affiliated districts; and Anba Sawiris, Bishop-General of New Monasteries, was made Bishop and Abbot of two neighbouring monasteries in the desert west of the Nile Delta: the monasteries of Anba Thomas the Hermit and Mar-Boqtor in Khatatba—a new monastery of only five or six monks. He also remains supervisor of the monastery of Anba Moussa al-Aswad (St Moses the Black). 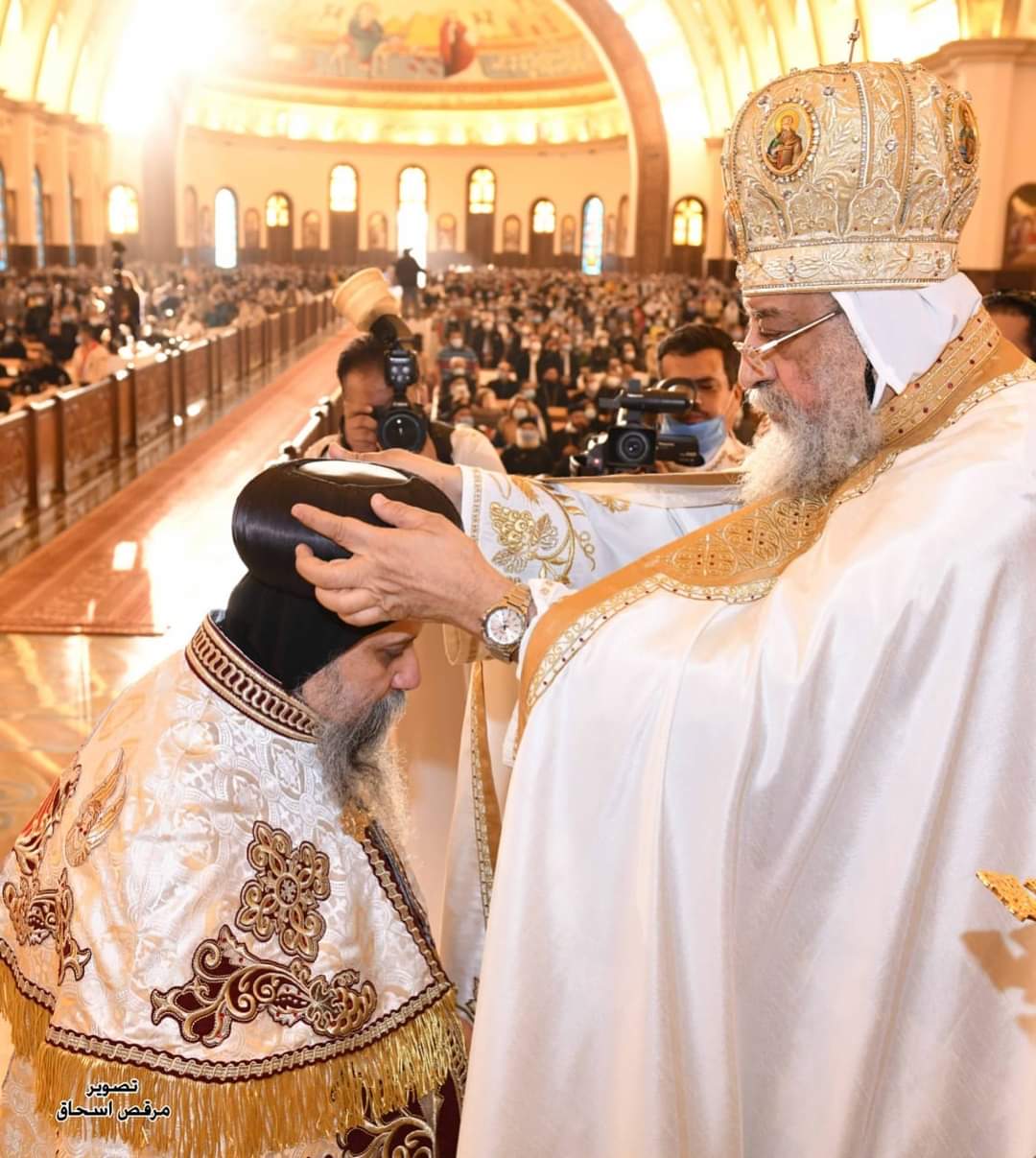 The monk Aghapius al-Anba Bishoy was consecrated Bishop and Abbot of Anba Bishoy Monastery in Wadi al-Natroun in the Western Desert.

The monks Theophilos al-Muharraqi and Serapion al-Suriani were consecrated bishops of the two new dioceses of Abu-Qurqas and its affiliated districts and East Minya respectively. The first was named Anba Philopateer, and the second Anba Fam. 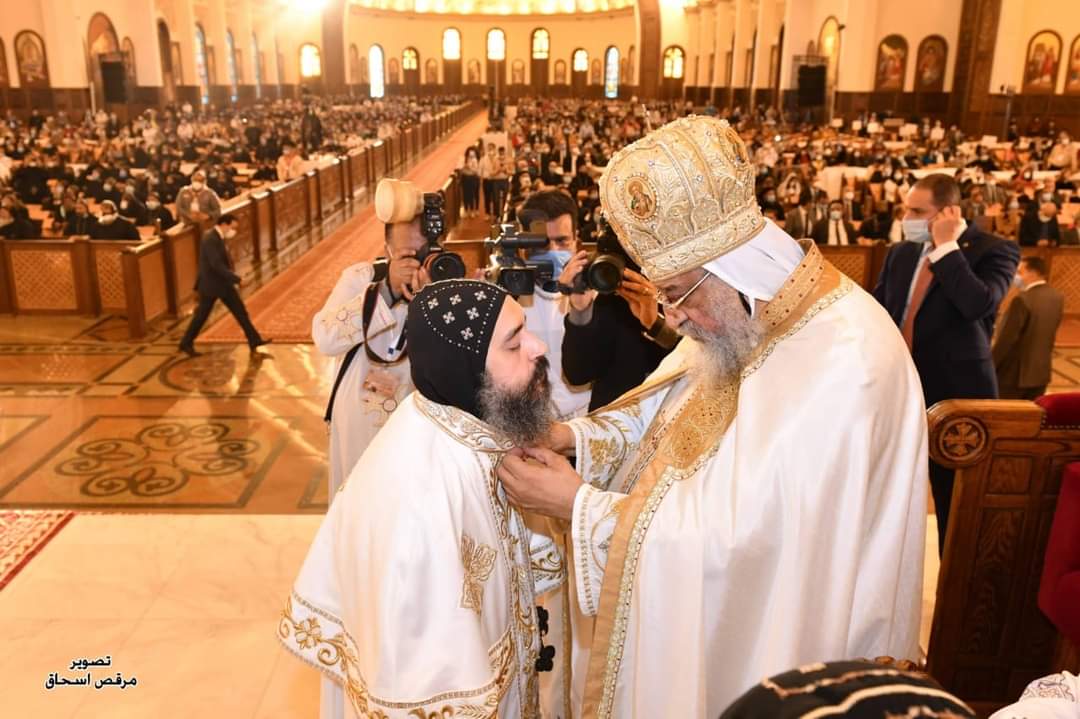 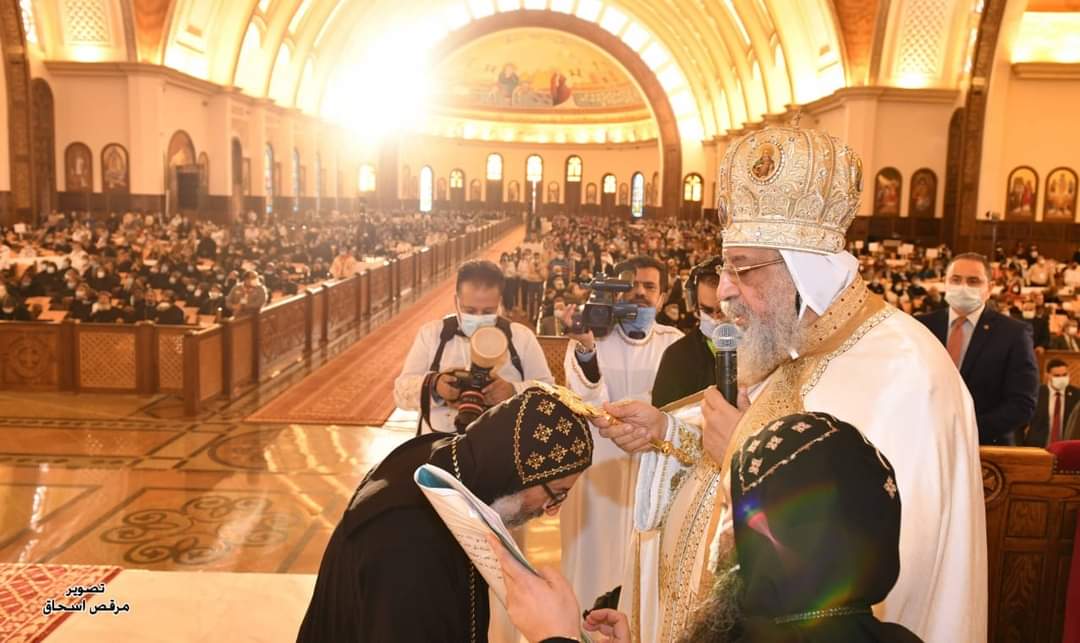 The Pope’s sermon during Mass focused on the topic of “Fatherhood”. He reminded the newly consecrated bishops that they were required to be fathers to the congregation, remarking that fatherhood was not something that could be taught, but was a gift of grace. He said that our prayer begins with “Our Father”, and that he would dare say that it was fatherhood that bonded the Coptic Church throughout its 20-century-long history. He went on to say that fatherhood is manifest in seven traits: it is caring, educating, leading and managing, humble, loving, shielding, and protective.

Following his sermon, Pope Tawadros gave a brief introduction of each of the new bishops, his history and prominent traits, and how these would work to enable him to fulfill the ministry he would be undertaking.

Guidance of the Holy Spirit

The eight-year papacy of Pope Tawadros II has seen 65 bishops seated or newly consecrated, living proof of the expansion of the Coptic Church’s ministry. With COVID-19 pandemic disrupting activities throughout 2020 and beyond, no new bishops have been assigned to parishes or monasteries which direly need them. 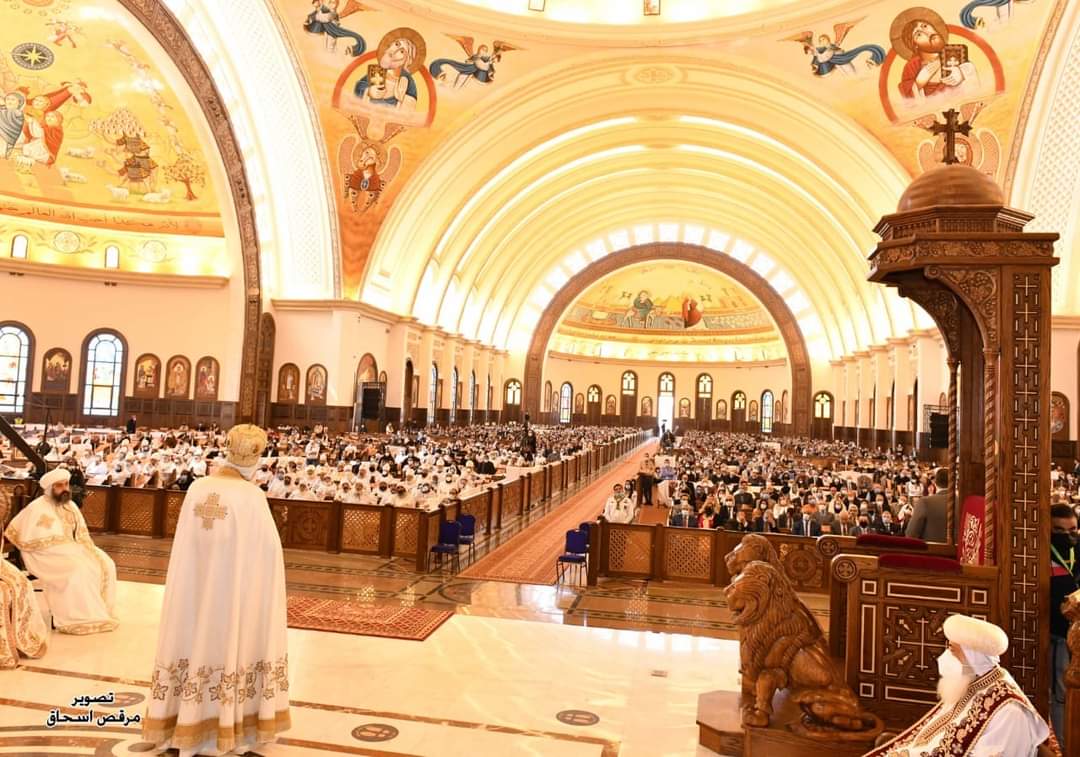 In an interview conducted by Watani’s Victor Salama with Pope Tawadros II and printed on 28 February 2021, the Pope talked about the then upcoming event.

“With the grace of God,” the Pope said, “The new bishops were chosen mainly by guidance of the Holy Spirit through prayer. The abbots were elected by the monks and short listed to three candidates who I then carefully interviewed and prayed for a choice according to the will of God.

“The diocesan and general bishops were nominated by the monasteries and the parishes that needed them, interviewed by me several times in a process of successive shortlisting, and the names of the finalists placed before the Holy Synod which unanimously agreed on a final choice.

Watani asked the Pope on the difference between diocesan and general bishops.

“They are both in the first place ministers in the Lord’s vineyard,” the Pope said. “We are all pastors working under the supreme pastor: Jesus Christ who lays down His life for the sheep, who serves and cares with love, who knows His His own wherever they may be.

“The difference, however, is that a diocesan Bishop serves his diocese for his lifetime without ever leaving it, whereas a general bishop is an assistant to the Pope, and may be delegated any where at any time to serve wherever ministry is needed … the two dioceses in Cairo that will be assigned general bishops are under the jurisdiction of the Pope, but help is needed.”

It has been noticed lately that a number of dioceses have been split into two or more new dioceses. Giza, for instance was divided into five separate dioceses in 2013, following the passing away of its Metropolitan Anba Domadius in 2011. And now this has been applied to Minya. “Why is this so?” Watani asked. 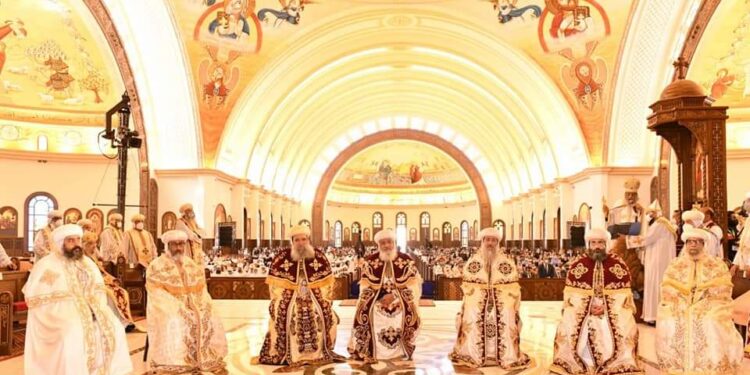 “True “ Pope Tawadros said. “In case of Minya, the region is home to some 2 million Copts. They form the largest Coptic Christian population in one place in Egypt and the Middle East; and they make 40 per cent of Minya’s total population. Minya region was divided into seven dioceses: Minya and Abu-Qurqas, Bani Mazar, Maghagha and al-Edwa, Matai, Samalout, Mallawi, and Deir Muwwas. Now the diocese of Minya and Abu-Qurqas has been split into Minya, Abu-Qurqas, and East Minya.

“The decision to split the diocese of Minya and Abu-Qurqas into three was taken after meticulous study and discussion with its Bishop-General Anba Macarius. We had to consider the density of the Coptic population in the various districts of the diocese, the number of churches serving them, number of priests, and the various community services offered to them. Basing on that, we took the decision to split it into three separate dioceses: Minya, Abu-Qurqas, and East Minya, to ensure better ministry and more effective service, especially given that the congregation is growing.

“We do not necessarily split all dioceses that lose their bishops. Following the departure of the venerable Anba Mikhail, Metropolitan of Assiut, we did not split the diocese, but consecrated Anba Yu’annis as its Bishop.”

“Along the same line of principle of ensuring better ministry and effective service, we have assigned bishops to serve in Africa and East Asia.

“There is a historical fact that the Coptic Church has time honoured relations with Libya, Ethiopia, and Eritrea that go back to the first Christian centuries. In Sudan, we have two dioceses in Atbara and Umm Durman in the north, and in Khartoum. Serving them are the Bishops Anba Sarapamon and Anba Eliya respectively.

“Ministry in the heart of Africa began in 1976 with the consecration of Anba Antonious Marcos as Bishop-General of African Affairs, who was in 2019 seated as Metropolitan of South Africa. In addition, Bishop-General Anba Boulos who was consecrated in 1995, has been ministering in a number of African countries.

“With the Coptic ministry in Africa encompassing 40 churches in nine countries, also numerous Coptic community centres, hospitals, and schools, the need has arisen for a new Bishop.” Bishop Joseph will now undertake that.

“As to Asia,” Pope Tawadros said, “The Coptic Church is active in Jerusalem through Metropolitan Anba Antonios, and in the Gulf countries through Anba Yulius, Bishop of Services and of Old Cairo, who regularly visits the Gulf region. We also have a ministry in East Asia but had no Bishop in charge of it. Now the newly consecrated Anba Rweiss will shoulder this responsibility, and will start in the Philippines.”

Watani had a question, however. “With all these consecrations and seatings, how is it that the monastery of St Macarius in Wadi Natroun did not get a new abbot, given that its previous abbot Anba Epiphanius was murdered in July 2018, and the monastery has ever since been without an abbot? 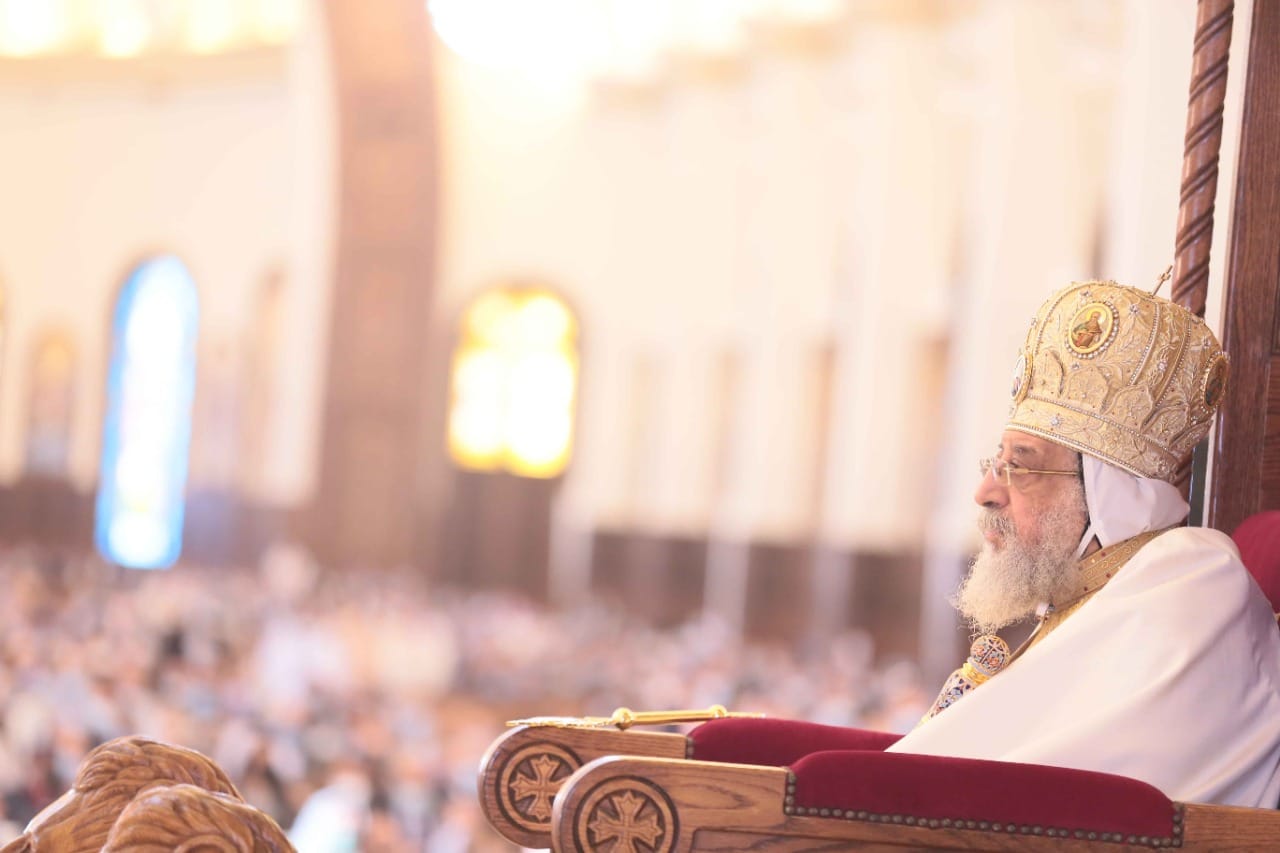 “St Macarius Monastery in Wadi Natroun,” the Pope said, “underwent a very difficult experience in 2018 and, even now following two-and-a-half years, the wound is still open. When the Lord allows us to sense full recovery of that wound, we will surely appoint an abbot. For now, the monastery is under the care of a spiritual supervisor and an administrative one. I am in regular contact with the monastery, and used to visit every month or two till COVID-19 restrictions curtailed these visits.

Cathedral of the Nativity

With joy, Pope Tawadros told Watani about the Cathedral of the Nativity of Christ hosting the consecration ceremony of the new bishops. 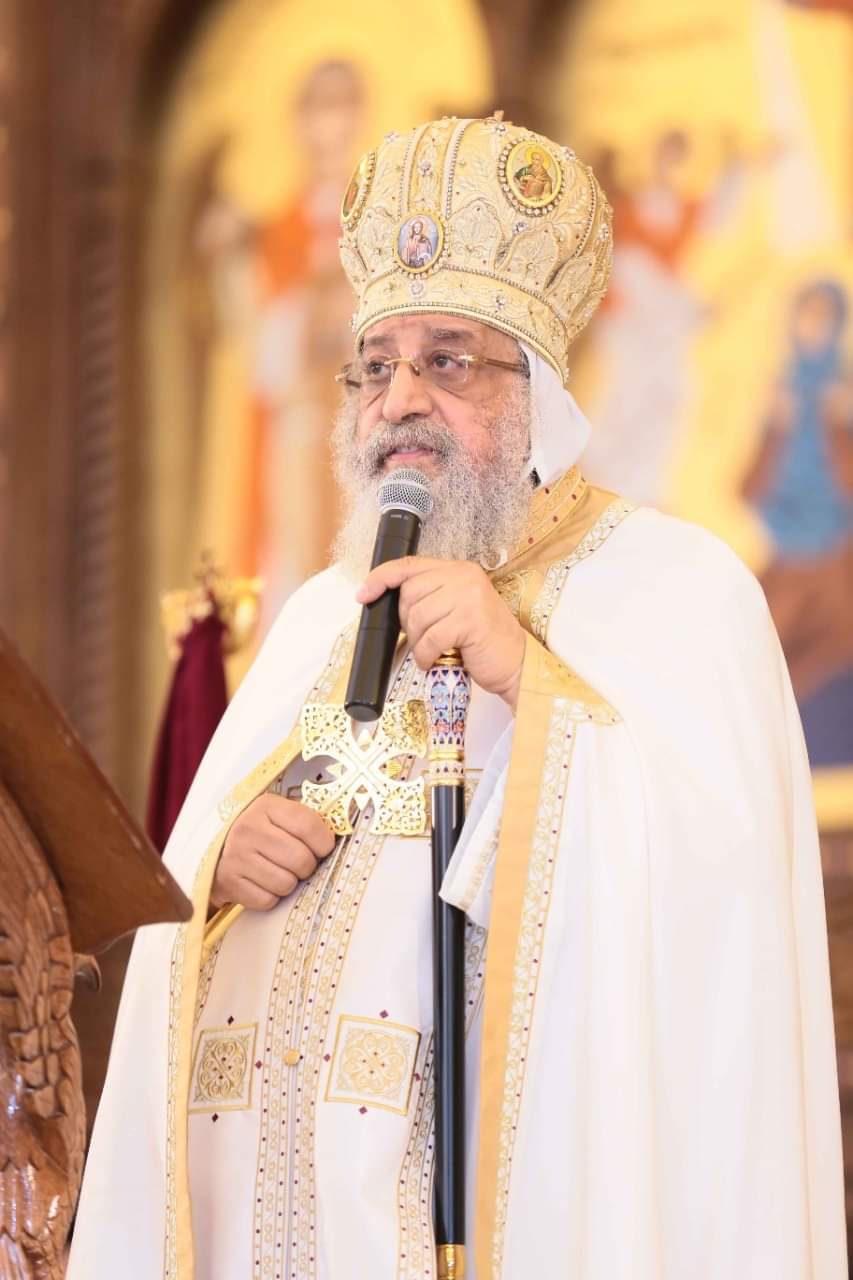 “The Cathedral of the Nativity of Christ is always a source of joy to me,” the Pope said, “because it is living proof of the climate of fraternity [between Copts and Muslims] that reigns today.” The land for the cathedral was allocated by the government to the Coptic Church, adjacent to land allocated for a mosque, and Egypt’s Armed Forces painstakingly worked on its construction. Both the cathedral and mosque are the largest in the Middle East, and were officially opened at the same time by President Abdel-Fattah al-Sisi on 6 January 2019, Coptic Christmas Eve.

“The Lord has also granted that the government should allocate another 30-feddan piece of land [one feddan = 4,200 sq.m] some 15km from the Nativity Cathedral to the Coptic Church on which to build a huge complex that would include papal and administrative headquarters, as well as premises for our Coptic colleges and institutes.

In his word during the bishops consecration service, Pope Tawadros joyfully pointed out that it was an auspicious event which included three firsts. It was the first time that bishops are consecrated there, and that the ceremony is attended by the members of the Holy Synod. It was also the first time that the recently installed bells of the Cathedral of the Nativity chime.

For this great gift and for His endless grace, the Pope said, “we thank our Lord.” 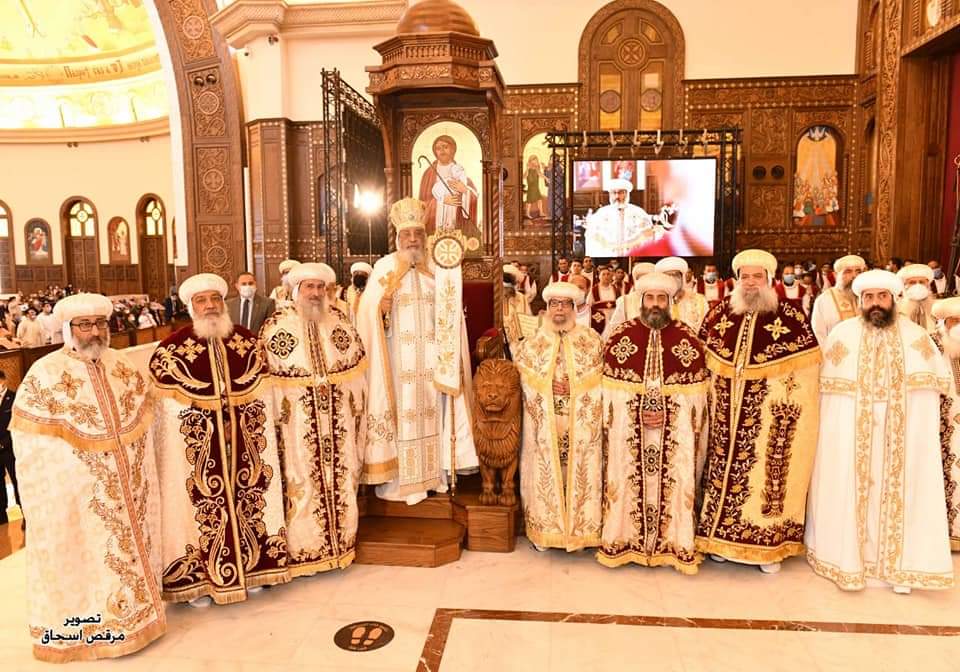