Photos by Medhat Waguih
Wednesday 24 October Israeli authorities broke into Deir as-Sultan in Jerusalem, which is located on the rooftop of the curch of the Holy Sepulchre. Starting a day earlier Anba Antonios, Coptic Orthodox Metropolitan of Jerusalem and the Near East, lead a peaceful protest in front of the monastery. Participating in the protest were Coptic priests, monks, nuns, and members of the congregation.
The purpose of the protest was to declare rejection by the Coptic Church of the Israeli authorities’ decision to break into the monastery and conduct repairs inside. The monastery is owned by the Coptic Church which claims historical rights to it that go back to the 7th century. Ethiopian monks, however, who have resided as guests in the monastery since the 17th century, wish to sieze it and, according to Anba Antonios, are backed by Israeli authorities. This despite a 1971 ruling by the Israeli Supreme Court that the monastery belongs to the Coptic Orthodox Church. To date, however, and despite numerous official complaints and reports by the Copts, the Israeli government has refrained form executing the court order.
The Israeli authorities had informed the Coptic Church in Jerusalem of its decision to force its way into the monastery on 23 October. The Church saw in this move a usurpation of its rights to the monastery, and a flagrant bias towards the Ethiopian monks who occupy it. Only one resident Coptic monk lives there.
Anba Antonios told Watani that the Israelis did enter the monastery at 6:30am on Tuesday, and placed inside equipment needed for the repairs. He said the peaceful protest would continue. The Israelis threatened they would use force in case anyone attempted to stop them from going in.

This is not the first protest Copts hold to declare their objection to Israeli injustice vis-à-vis Deir as-Sultan. Last March, Anba Antonios, led a peaceful protest in front of the monastery against actions taken by the Ethiopian monks without coordination with the Coptic Church.

The Ethiopian monks had replaced old doors at the monastery with new ones without notifying the Coptic Orthodox Church which saw this as an assault on the monastery and a flagrant violation of the Jerusalem status quo system. Anba Antonios told Watani, “I had been on a pastoral visit to Jordan and Kuwait which fall within my jurisdiction. I was informed by those in Jerusalem that the Ethiopian monks has replaced the doors, and had thrown out the Coptic monk resident there, who had taken a photograph of the new doors. Once I returned, I insisted on entering Deir as-Sultan and on removing the new doors. The Ethiopian monks were hostile; holding sticks they attempted to stop me from entering. But a number of Copts immediately surrounded me, and we entered the monastery. I called the police, the Ministry of Religions, and the Egyptian Ambassador in Tel Aviv. I did not leave till the new doors were removed and the Coptic resident monk reinstated.”

An earlier incident occurred on 22 September 2017 when a stone fell from the roof of the church of the Archangel Michael at the monastery. This led the authorities of Jerusalem municipality to close the church until the damage could be fixed. According to the Church, all survey of the site and negotiations on repairing the damage were conducted without informing the Coptic Church in its capacity as the owner. The Coptic Church officially expressed its disfavour in writing to the authorities concerned, and offered to do the necessary repairs and shoulder their expenses. This offer, however, was rejected and the Israeli government said it would—as an impartial party—do the repairs. The Coptic Church accepted conditionally.
A month later, the government’s construction engineer attempted to bring equipment into the monastery to do the repairs. The Coptic Church was not informed beforehand.This drove the Coptic monks, deacons, and workers at the monastery to stage a peaceful protest at the gate of the monastery, and to prevent any equipment form being taken inside. Heading the protest was Anba Antonios.
The Church said that the Egyptian embassy in Tel Aviv intervened, and the repairs were postponed subject to prior coordination with the Coptic Church.

The monastery goes back to the Roman Emperor Constantine the Great who built it in 335. It lies within the walls of the Old City of Jerusalem, on the rooftop of the church of the Holy Sepulchre. In the 7th century, it was granted to the Coptic Church by the Ummayad Sultan Abdel-Malek Bin Marwan (684 – 705); hence its name of Deir as-Sultan. In the 12th century, Salah al-Din al-Ayyubi, famous as Saladdin, confirmed its ownership by the Coptic Church, a fact that remained uncontested till modern times when Ethiopian guest monks made attempts to seize it. 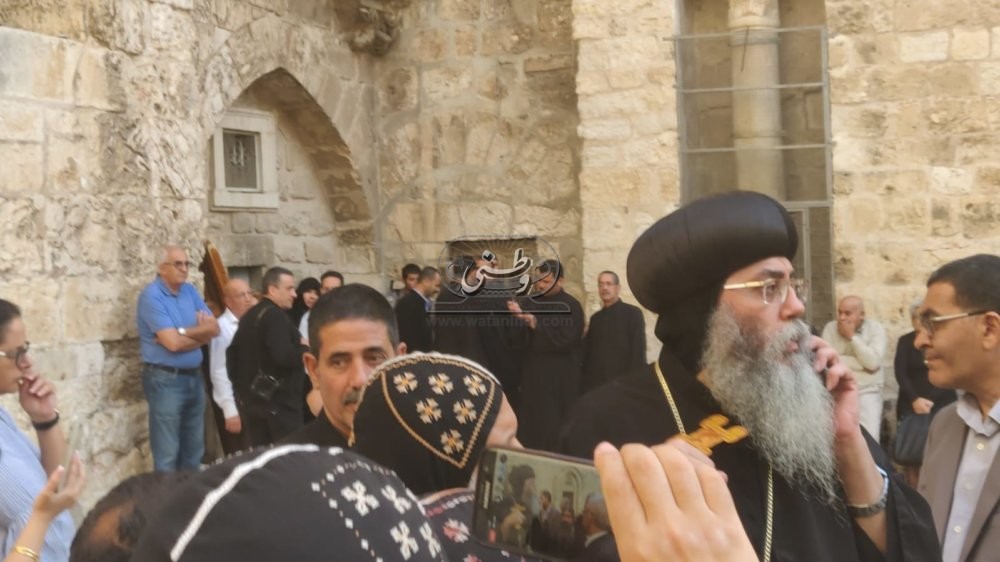 The monastery stretches some 1800 square metres over the roof of the church of the Holy Sepulchre, is part of the Coptic Orthodox patriarchate in Jerusalem, and includes a passageway that leads directly down into the church of the Holy Sepulchre below. The centre of the monastery’s courtyard is dominated by the dome of the church of St Helena; on the southeast corner are two old churches: one consecrated in the name of the Archangel Michael and the other in the name of the Four Incorporeal Creatures. The eastern side hosts monk cells and a room for the director of the monastery, a Coptic monk. 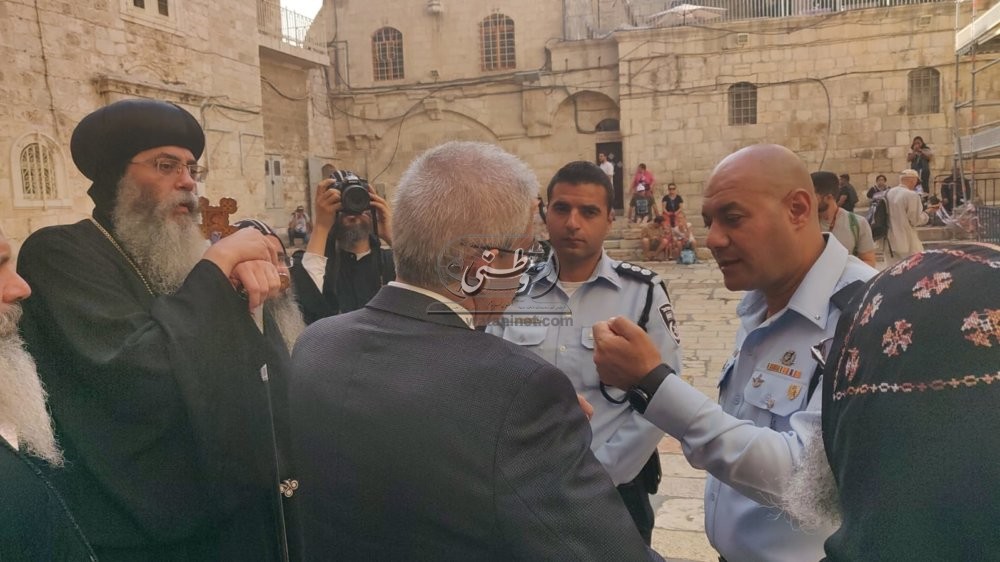 The monastery has been the subject of conflict since April 1970 when Ethiopian guest monks hosted by the Copts at the monastery took advantage of the fact that the Copts were away celebrating Mass on the Feast of the Resurrection, changed the locks to the stairs connecting the monastery to the church below, and practically seized the monastery. This was done by approval of the Israeli government, and under protection of the Israeli military. At the time, Egypt and Israel were at war. 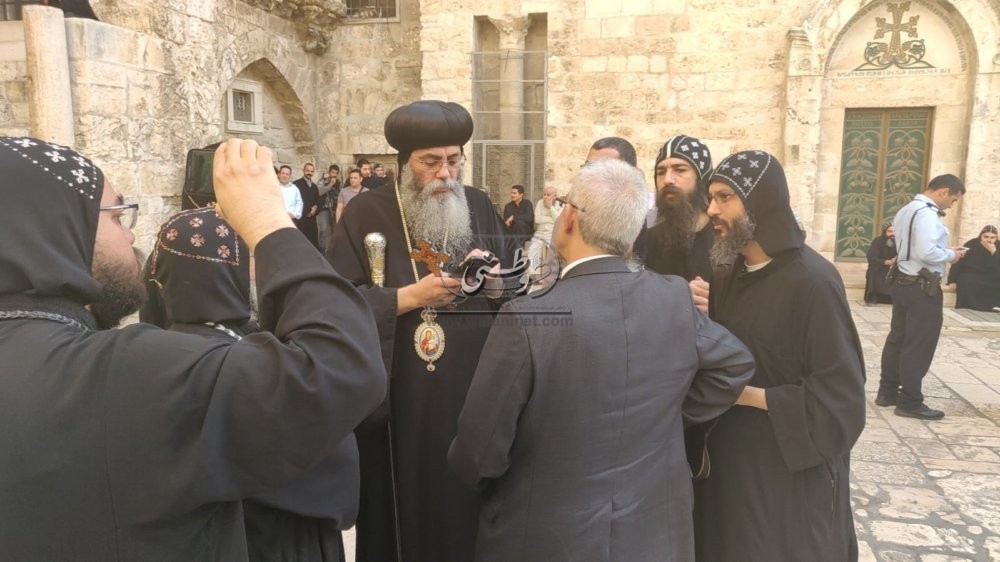 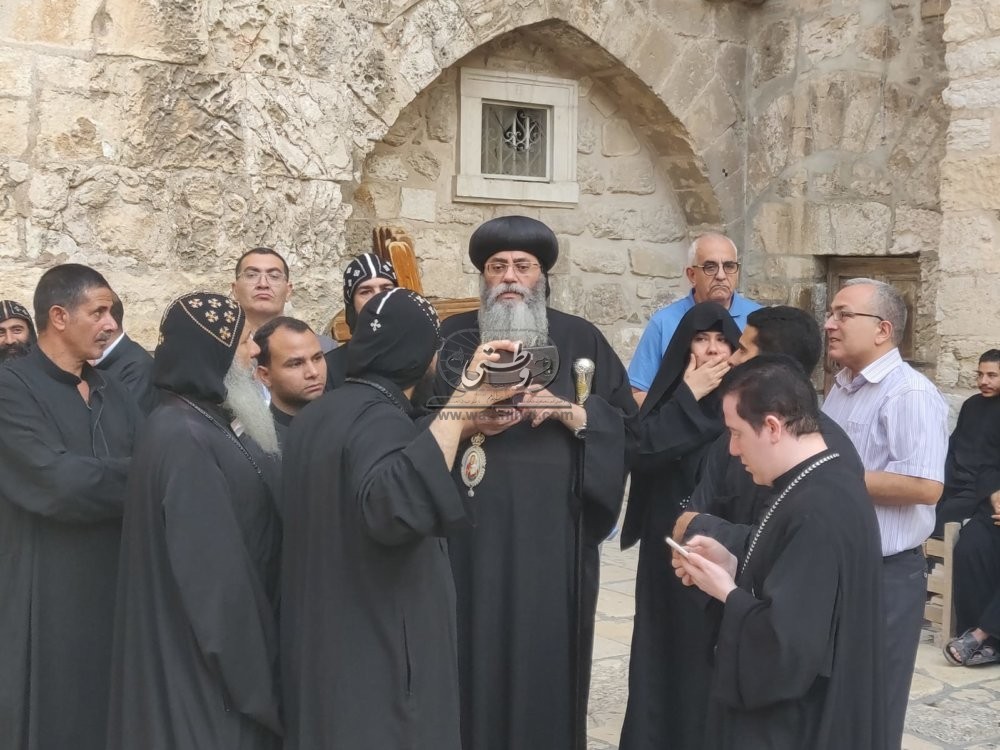 The year 1850 witnessed the start of what was to become an interminable battle by the Ethiopian monks to seize the monastery. In every one of these numerous attempts, however, the Copts proved beyond doubt their claim to the monastery, and were thus empowered to it by the Jerusalem authorities. That is, until April 1970. Ever since, the Israeli authorities have taken a hostile stance against the Coptic Church’s rights to the monastery, to the point of refusing to execute the 1971 court order in favour of the Copts.

The Egyptian Foreign Ministry, the Church said, strongly supports the Coptic Church in its demand to reclaim the Coptic historical monument, seeing that Deir as-Sultan is heritage that concerns Egypt in its entirety, not merely its Copts.