That New Year Eve will forever remain etched in my mind. I had gone to bed and was fast asleep when a rude sound jolted me awake. It was the telephone ringing, and the alarm clock on my night table pointed at around 2am. I reached for the telephone receiver only to hear at the other end the distressed voice of our young reporter Nader Shukry telling me that some explosion had occurred at a church in Alexandria as the congregation was leaving after New Year midnight service. My heart sank.

“What d’you mean you don’t know?” I cried in frustrated anguish. “That’s the most basic thing to know!”

“You don’t understand,” he almost shrieked, “There are no bodies to count. Only fragmented body parts!”

That was during the first minutes of 2011, and the horrendous incident and its aftermath have gone down in Egyptian history as the Alexandria Church Explosion. A fact-finding committee formed by Egypt’s Parliament placed the number of dead at 26, and the injured at 80. The then Interior Minister Habib al-Adly announced two weeks later that the culprits were Islamist Jihadis who included Palestinian and Egyptian elements. But investigations came to a near-halt with the Arab Spring uprising which started on 25 January 2011 and led to political upheaval and the rise of Islamist power.

Before and after Alexandria 2011

Did the Alexandria explosion stand as a lone incident in our modern times, an incident where Copts were collectively killed merely for being Christian?

Before Alexandria 2011, Copts were victims of oppressive fundamentalist, fanatic attitudes which brought upon them unduly harsh collective violence under pretexts that ranged from personal arguments to disputes over land, property, or commercial gain; social censure; or building churches. More often than not, there was some pretext or another, no matter how lame, for Islamic fundamentalists to justify violence against Copts. In a few cases, individual Copts were viciously killed on identity, but it was mostly by persons who suffered mental imbalance.

Alexandria 2011, however, heralded in an era where fundamentalists needed no pretext to justify killing Copts; the Christian identity was justification enough. Copts were flagrantly killed on identity, martyred for their faith.

Copts killed for no reason other than their faith have been declared by the Coptic Church ‘modern-day martyrs’. Among the first such martyrs during the current millennium were the Alexandria martyrs. Others would follow and their numbers swell until they call for an annual commemoration: the Feast of Modern-Day Martyrs on 15 February, declared by the Coptic Orthodox Holy Synod last year and celebrated for the first time in February 2018.

To honour these martyrs, Watani rummaged through its files to answer the question why martyrdom was not relegated to history. 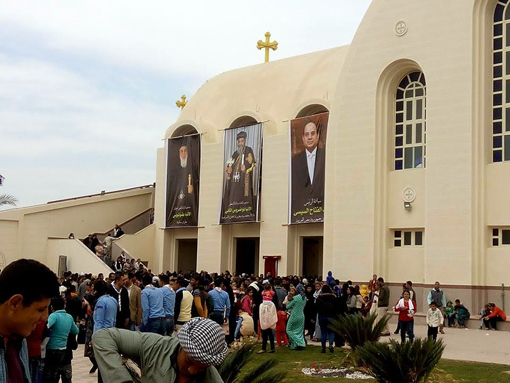 Al-Arish: No place for Copts

Once the Islamist Muslim Brotherhood regime that came to power in Egypt in the wake of the 2011 Arab Spring was overthrown in July 2013, Egypt entered a new era of a civil State that has been viciously fought by Islamist terrorists. Predictably, Copts came in for the lion’s share of terror targets. Daesh made no secret of that; they declared Copts were their “favourite target”.

As Islamist Jihadis affiliated to Daesh barricaded themselves in the mountain caves of North Sinai, the town of al-Arish became a battleground between them and the Egyptian army and police. In the process, Islamists targeted local Copts.

Early on, in July 2013, the 39-year-old Coptic priest Fr Mina Sharubim was shot to death by masked men as he walked in front of a Church adminstrative building in Arish, and 65-year-old Magdy Lamei was beheaded in the town of Sheikh Zuwayed near Rafah. Three years later, in June 2016, Fr Raphail Moussa, 46, who had been ordained with Fr Mina in 2012, was also shot dead by Daesh in a drive-by shooting in Arish.

In February 2017, six Copts were killed on identity by Daesh in Arish in the space of three weeks, with threats of more killings to come if the Copts do not leave town. A Coptic exodus ensued; two Copts who ventured back into town in May 2017 and January 2018 were also killed.

October 2013 saw two masked men on a motorcycle open fire on a crowd of Copts who had gathered on the sidewalk in front of the church of the Holy Virgin and the Archangel Michael in the district of Warraq in Giza. The Copts were leaving a wedding in the church; the usual lingering and chatting swelled the crowd, so that the gunfire resulted in four deaths and 18 wounded. Among the wounded were three Muslims who had been sitting at a nearby sidewalk café.

Fast forward to January 2015 which witnessed the beheading of the 20 Copts and one Ghanaian in Sirte, Lybia. The date video footage was posted of the beheading, 15 February, was designated the Feast of Modern-day Martyrs by the Coptic Church.

The day 11 December 2016 marked a quality shift in the manner Daesh targeted Copts. That day, a suicide bomber rushed into al-Boutrossiya church in Abbassiya and blew himself up during Sunday Mass, killing 29 and injuring some 50. The singularly beautiful church was left in a state of pitiable destruction. Again, Egypt’s Armed Forces restored the church. When Pope Francis visited Cairo in May 2017, he joined Pope Tawadros and other Church leaders in Egypt in ecumenical prayers at Boutrossiya where Pope Francis paid tribute to the witness by blood for Christ.

Months later, as Copts celebrated Palm Sunday on 9 April 2017, another suicide bomber broke into a church in the mid-Delta city of Tanta and blew himself up killing 30 and injuring 56. A few hours later, another suicide bomber attempted to do the same in Alexandria’s St Mark cathedral where Pope Tawadros has just concluded Holy Mass, but could not enter the church so blew himself at the security gate, killing 16 and injuring more than 40.

The killing of 28 men, women, and children who had been on their way to the desert monastery of St Samuel the Confessor, west of Minya, on 26 May 2017, left Egypt heartbroken. The buses they were riding were stopped a few kilometres from the monastery by masked, armed men who had come in four-wheel drive vehicles. When the Copts refused to deny their faith, they were summarily put to death. Even the children were not spared.

Egypt answered by striking Daesh terrorist camps in Libya where the attackers had trained and had been furnished with supplies, arms, and ammunition.

But Egypt was not done with heartbreak. In October 2017, Fr Samaan Shahata, a 45-year-old Coptic priest from a village in Beni Sweif, some 130km south of Cairo, was murdered on a street in Medinat al-Salam, a satellite town east of Cairo. His killer, a young man named Ahmad al-Sonbati, chased him around, repeatedly stabbing him with a dagger, till the priest fell dead. Sonbati confessed to premeditated murder, saying he had bought the dagger and was on the lookout for a Christian priest to kill. When he spotted Fr Samaan, “I sensed Allah telling me to go kill him,” Sonbati said, “And felt I would do good by that.” He has been sentenced to death by the criminal court, but there is a chance the sentence may be appealed. 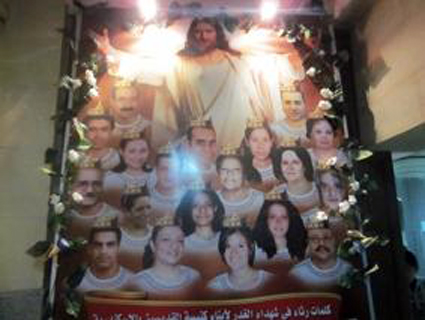 Is it any surprise?

The most recent martyrdom incident occurred in Helwan, south of Cairo, on 29 December 2017 when two gunmen opened fire on Mar-Mina church which they could not access because of heavy security. It was Friday morning and the congregation was attending Mass inside. But right outside the church, six Copts, a security guard, and one of the gunmen were killed. The other gunman was caught as he attempted to flee. The gunmen had, on their way to the church, attacked a Coptic-owned shop that sold home appliances, killing two Coptic brothers who worked there.

It is an undeniable fact that Copts, for the major part, live in peace in their land of Egypt, despite grievances they might hold on account of their being a numerical minority. But given sporadic incidents such as those cited above, is it any surprise that the Church should designate a feast to honour modern-day martyrs?