President Sisi: No more 5pt-loaf of bread; free school meals tailored for the needs of every child; Social housing to replace slums

Over the last two weeks, President Abdel-Fattah al-Sisi opened vital projects and made bombshell announcements likely to affect Egyptians in significant ways in the near future.

President: price of bread must rise

On 3 August 2021, President Sisi inaugurated Silo Egypt for Food Industries, known as Silo Foods, a mega food industries complex in the industrial Menoufiya town of Sadat City some 94km northwest Cairo. During the opening ceremony, he announced that the price of subsided bread must rise. The price of a loaf of subsidised bread has stood at 5 piastres (pt) [1pt = 0.00064 USD] for some 30 years; no government dared increase it despite many rises in general prices and drops in the value of the Egyptian pound. 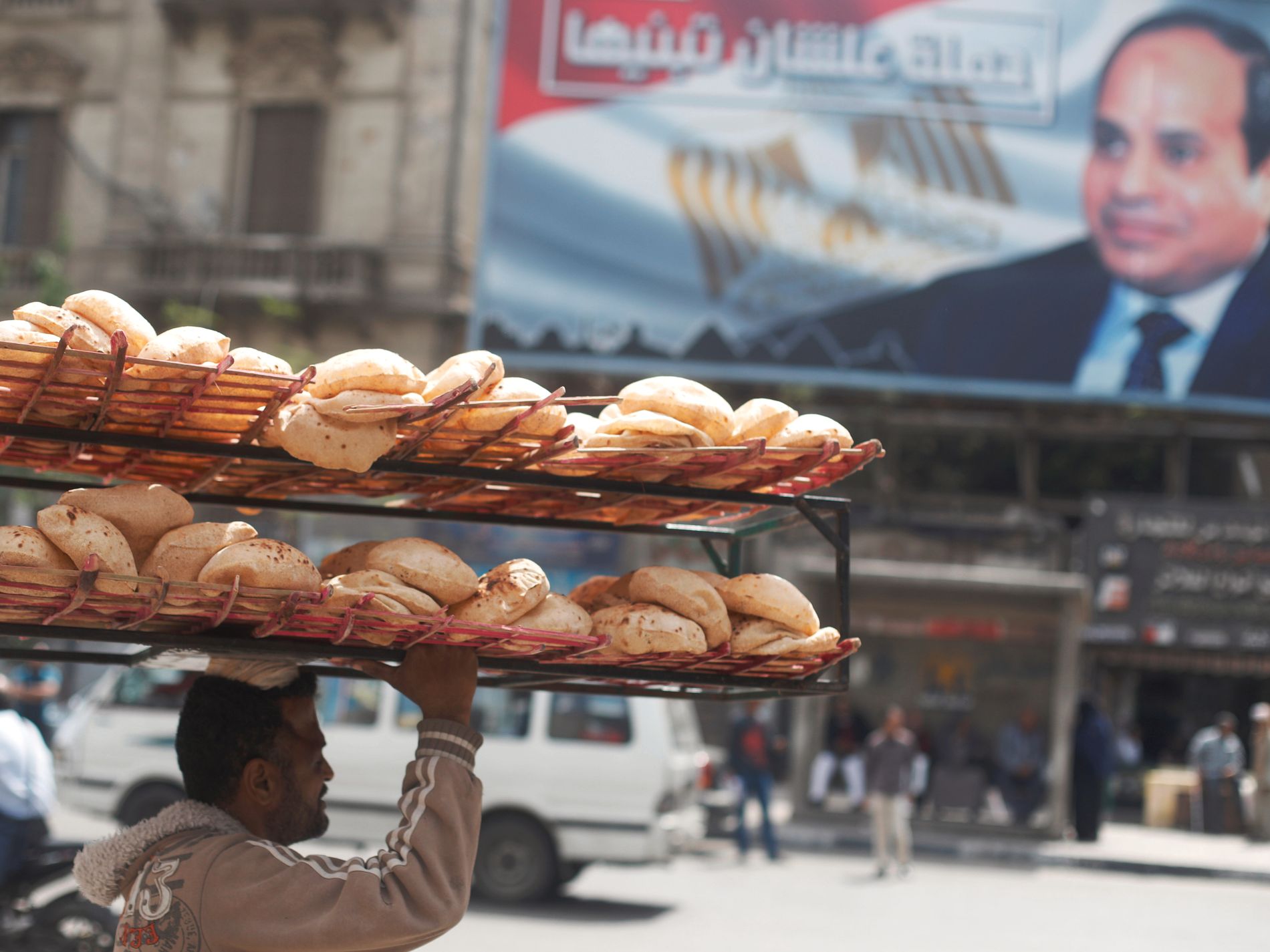 “But this situation cannot go on,” the President said. “No one should tell me not to touch the issue of bread pricing; I will do that.” He stressed that he personally takes the responsibility of that decision. “Not the Prime Minister, not the Supply Minister; I take full responsibility for the decision to raise the price of subsidised bread,” he powerfully said. However, the President said that the price of the loaf of bread will not be stretched to its real cost of 60-65 piastres. According to official statistics, the government pays EGP275 billion worth of subsidies annually, EGP50 billion of which go to subsidise bread, benefitting 72 million people.

Silo Foods complex stretches over 102 feddans [1 feddan = 4,200 square metres]; the total area of the project will be 135 feddans once the second phase of the project is launched in April 2022. Silo Foods is established by the National Service Products Organisation, and boasts when complete 10 factories; 10 laboratories; state-of-the-art transfer, handling, and health facilities; as well as administrative buildings; hotel accommodation; staff services and a medical point. 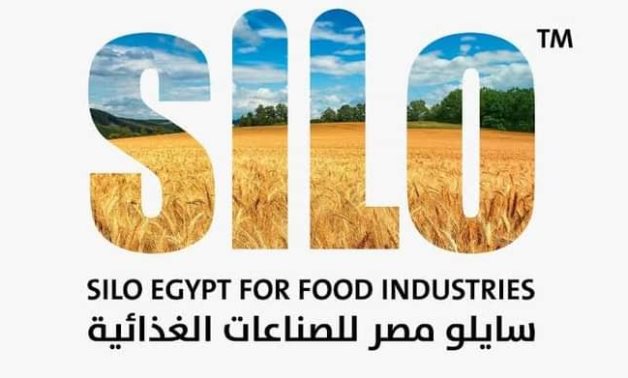 The first phase includes six factories served by a wheat mill and 14 silos; also three factories for printing and packaging; and transfer and handling facilities.

According to Supply Minister Ali Meselhi, the complex, when complete, will boast 10 factories producing some 40 goods that include bakery products, pasta and biscuits. It will contribute to securing an abundance of healthy foods on the market, which is expected to reduce commodity prices and to enhance investment and exports. Mr Meselhi explained that the State targets to increase its storage capacity of wheat from 3.4 million to 5 million tons. 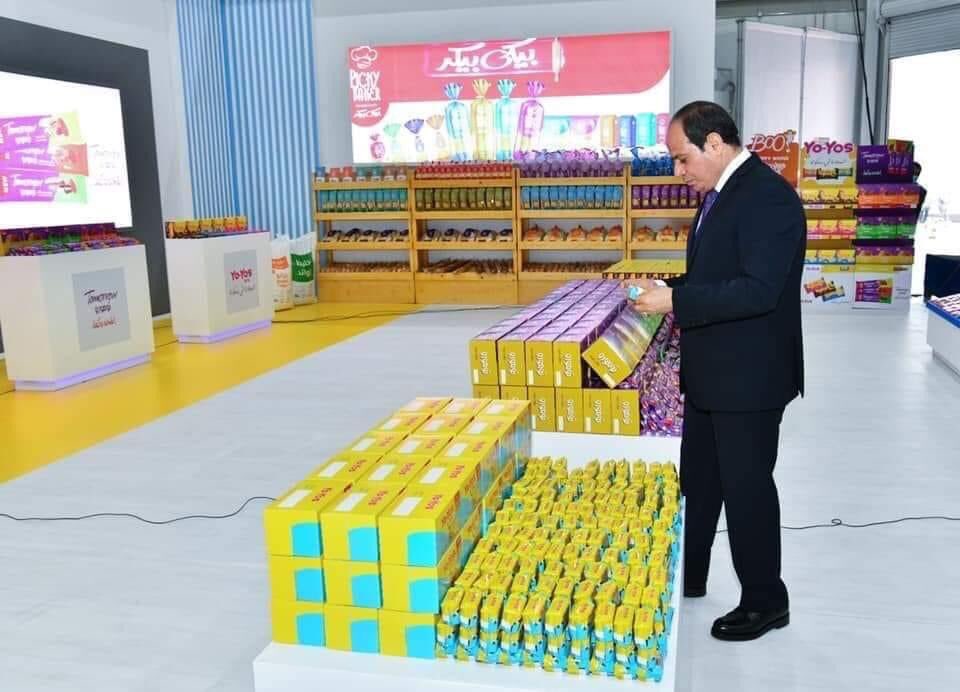 Silo Foods is expected to produce school meals free of charge for some 13 million students nationwide. Each meal will cost the government EGP7, meaning that the government needs to come up with EGP7.7 billion to provide school meals to children. According to President Sisi, the increase in price of subsidised bread will go into financing the school meals. The President said he hoped that the true reason for the bread subsidies adjustment goes down for what it is, and is not misrepresented [by the media and the public] as a mere attempt to raise prices. The President said that in order to provide for the much needed school meals, there will be a cut in the budget allocated for each Cabinet ministry. 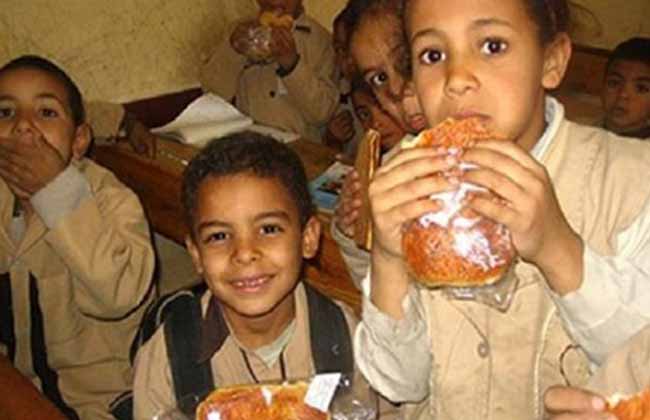 “We have to feed our children,” President Sisi said. “I desire that our children be given nutritious meals every school day. For the moment, we can only do so three days a week because of the cost.” 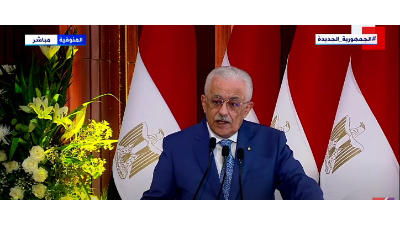 Dr Shawki explained that the meals provided by Silo Foods will be customised to meet the health conditions of children.

“We need to give our children better care in order for them to be healthy,” the President said, noting that the fact that 3.4 million students suffer from obesity indicates they do not play sports or receive the required healthcare. He said that the government should ensure that families monitor the health of their children, through ensuring they get healthy food and play sports.

During the event, Health Minister Hala Zayed promised that, in addition to the school meals, kiosks will be set up near schools to sell students nutritious snacks such as biscuits, as an alternative to junk food. 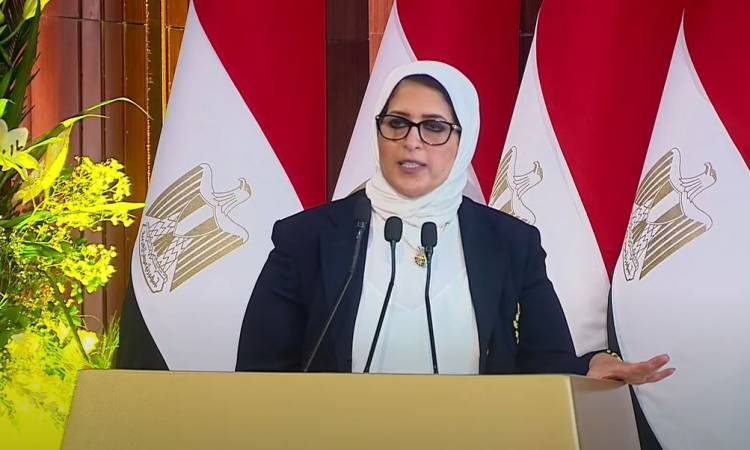 In a subsequent meeting among Dr Zayed; Dr Shawki; and Major General Taymour Moussa, Chairman of Silo Foods, Dr Zayed said that the Health Ministry’s National Nutrition Institute is working on determining the daily requirements of nutrients needed by every category of students. In a later meeting with the Premier, she explained that each school student enrolled in the system for school meals will be given a smart card connected to the results yielded by the 100 Million Healths study; the QR code on the card will serve to determine the meal to be given each student according to their health condition and requirements. Yet Dr Zayed warned that school meals represent only 25 per cent of the nutrition needed for children, stressing the need to raise awareness among parents of the nutritional elements their children’s diets must include. 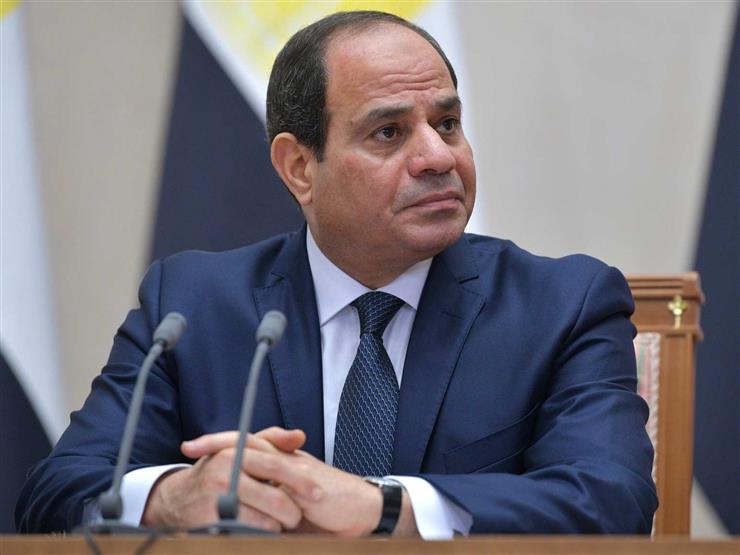 Seeing that population growth remains a serious challenge to all attempts at development in Egypt, especially economic development which directly reflects on prices, President Sisi stressed the need to promote family planning and raise reproductive health awareness among women. He recommended that women undergo medical examinations before getting pregnant to ensure that they do not suffer from nutritional deficiency that can affect their babies. To which the Minister of Health replied that a nationwide campaign for screening individuals for nutritional deficiency will be launched next October, and that it will operate through medical convoys.

On 14 August, as he opened a social housing mega project in Badr City, 46 km east of Cairo, President Sisi made another surprise announcement. The President announced a plan to list the Administrative Capital for Urban Development (ACUD), owner and developer of the New Administrative Capital of Egypt, on the Egyptian Stock Exchange (EGX). This will be done, President Sisi explained, through a fund which currently has a solvency of EGP100 billion. By the time of the offering, the President said, ACUD’s assets would exceed EGP3 trillion. According to Bloomberg, “this could be the North African nation’s biggest ever initial public offering.” ACUD president Ahmed Zaki Abdeen told Bloomberg that this IPO which will take place on EGX, will very possibly take place in another international market as well. 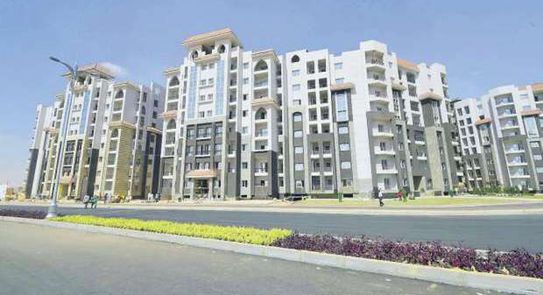 The new housing units in Badr will be handed to the government employees whose offices will be the first to move from Cairo and relocate in the New Administrative Capital; Badr is a mere 15-minute drive away from the new capital.

Previous official declarations said that the Cabinet has given those employees the choice between getting a housing stipend in order to procure adequate housing, or a transport allowance for those wish to remain in Cairo and make the daily commute to the new capital.

According to Ammar Mandour, Head of Badr City Authority, the population of Badr today stands at 210,000 inhabitants, but is expected to soar to 840,000. He said the new social housing project in Badr caters to middle and lower income employees. The employees’ housing project in Badr includes 9624 units, 4704 of which are already built, among them 1272 units handed to their new owners. In addition, he told Middle East News Agency (MENA), 13 service buildings are ready for operation.

The first phase, Mr Mandour said, was completed at a total cost of EGP267 million, pointing out that 25 per cent of the second phase is already underway. 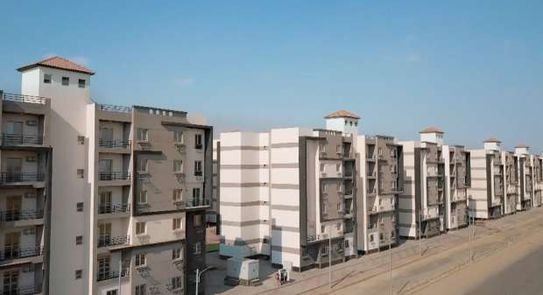 A monorail that is being erected to connect Cairo to the new capital will have several stops at Badr. According to Abdel-Moteleb Emara, Vice President of the New Urban Communities Authority, government employees who get apartments in Badr are expected to pay the instalments for their unit from the housing stipend which the government pays them.

Following his tour of Badr City, President Sisi made significant remarks on the topic that most irked Egyptians: that of subsidies.

“The State does not seek to lift the subsidies from which so many Egyptians benefit,” the President said, “but to overhaul the process, accordingly improving living conditions for Egyptians. 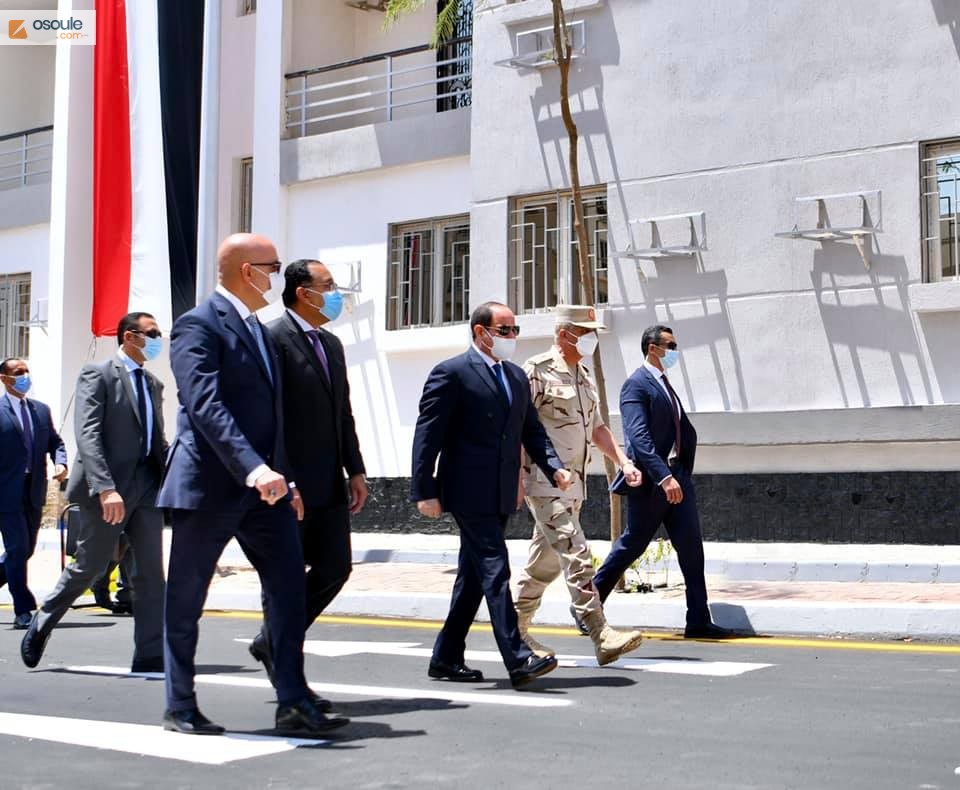 “Everything has to be put in good order,” he said, “for the State to regain its stature.”

Most important of all, the President said, is to raise awareness among the people. He explained that in the span of 10 years, the State had to bear the cost of EGP3 trillion in subsidies, noting that the projected development of all of Egypt’s villages in the coming three years will cost the State budget some 800EGP million, that is around one-third of the cost of subsidies.

President Sisi explained that if we are serious about improving living conditions, we need to urgently address uncontrolled population growth. 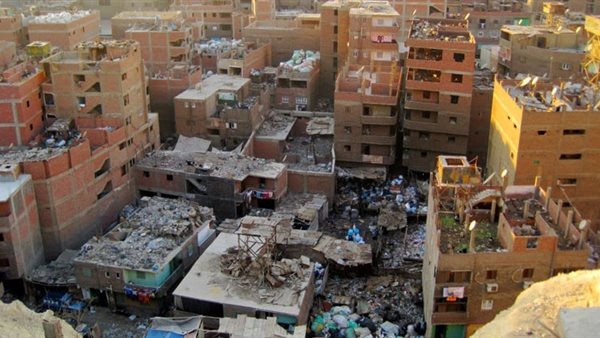 He talked about the overcrowded, randomly built, unplanned slum districts in Egypt, the direct outcome of population explosion, saying that the existence of slums reflects the image of a country losing control. He pointed out that the government is solving the slum problem through building social housing projects across the nation. “There can be no future for a nation of slum dwellers,” he said. 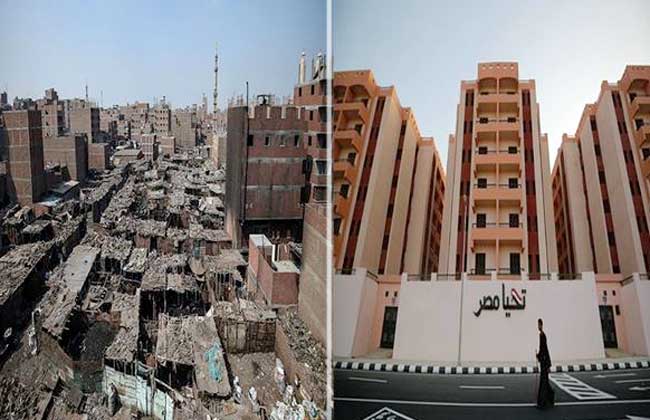 “Persons who grow up in slums can never grow into rational, well educated, good citizens who feel their country has given them much and that they should give back. The State chose to solve the predicament by offering slum dwellers alternative housing free of charge, expecting nothing in return but for them to pay the cost of maintenance and upkeep,” the President said. 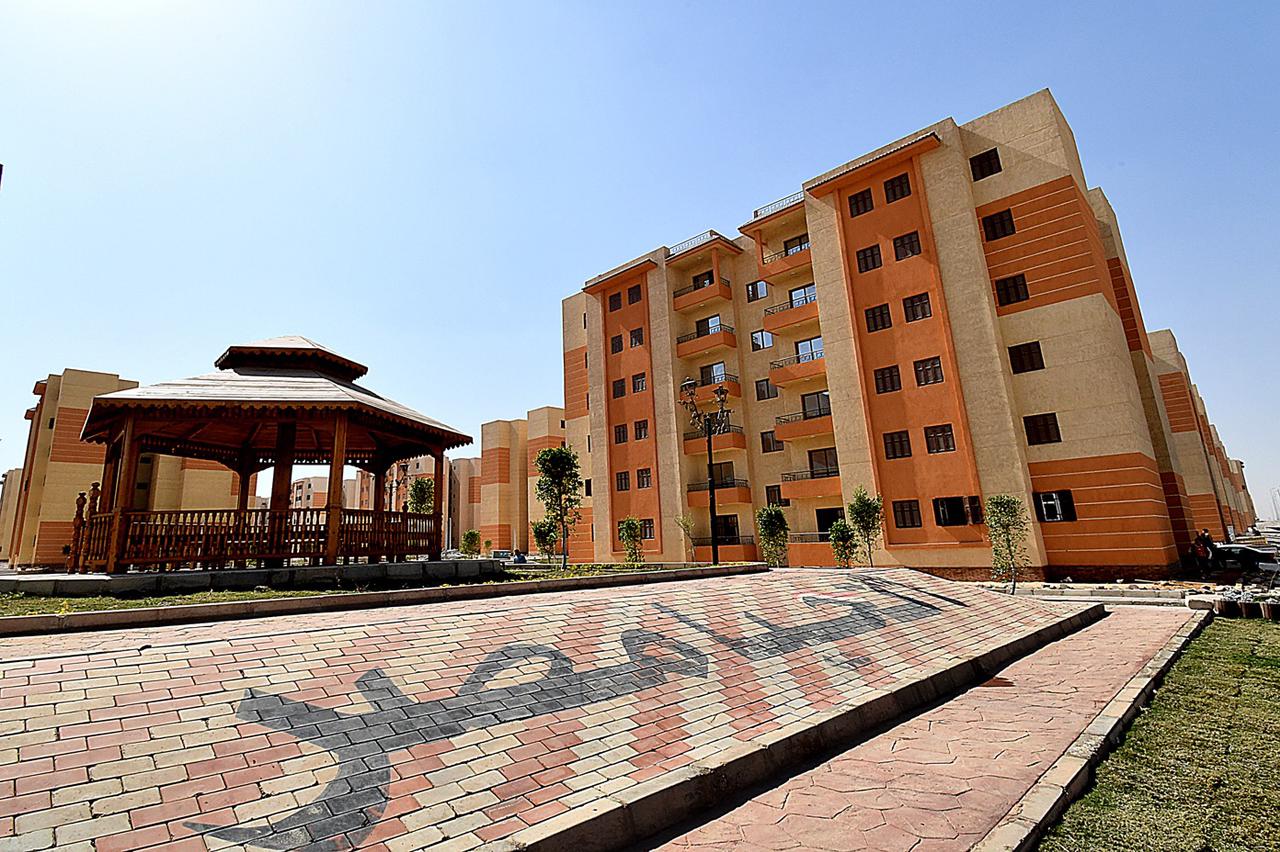 In case of housing, the President said, the government seeks to increase the supply of housing units and facilitate payment terms. He said that the housing units offered by government projects are all offered fully finished, pointing out that the projects are never inaugurated before being completely equipped with the infrastructure, roads, services and all. 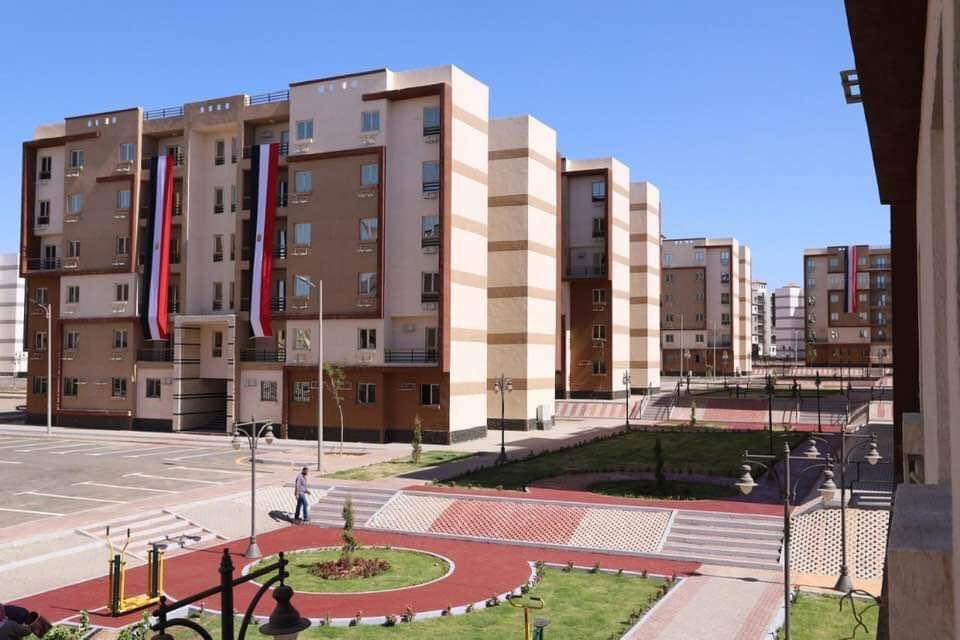 President Sisi pointed out that, in order to support real estate developers, the government offers them the land free of charge in exchange for building housing units as soon as possible and to offering them on the market to the public.