On path to healing and building

Given that Watani International has in 2021 marked 20 years in print—our first issue was printed on 18 February 2001—we promised our readers to regularly publish reviews of our issues during those 20 years. We already reviewed the issues from 2001 to June 2013; today we keep good on our promise by covering 2014. That year followed the massive 30 June 2013 Revolution which led the military to intervene and rid Egypt of the post-Arab Spring Muslim Brotherhood (MB) regime that had attempted to wipe out Egypt’s identity by instating Islamism. Adly Mansour, Head of the Supreme Constitutional Court was installed as interim President in July 2013, and a new Constitution was drafted even as the country fought a bitter spate of Islamist terror attacks.

The year 2014 started off with Egyptians heading to the polls for a referendum on the new Constitution which confirmed Egypt as a civil State with full citizenship rights; it was given a resounding approval in a landslide 98 per cent vote. 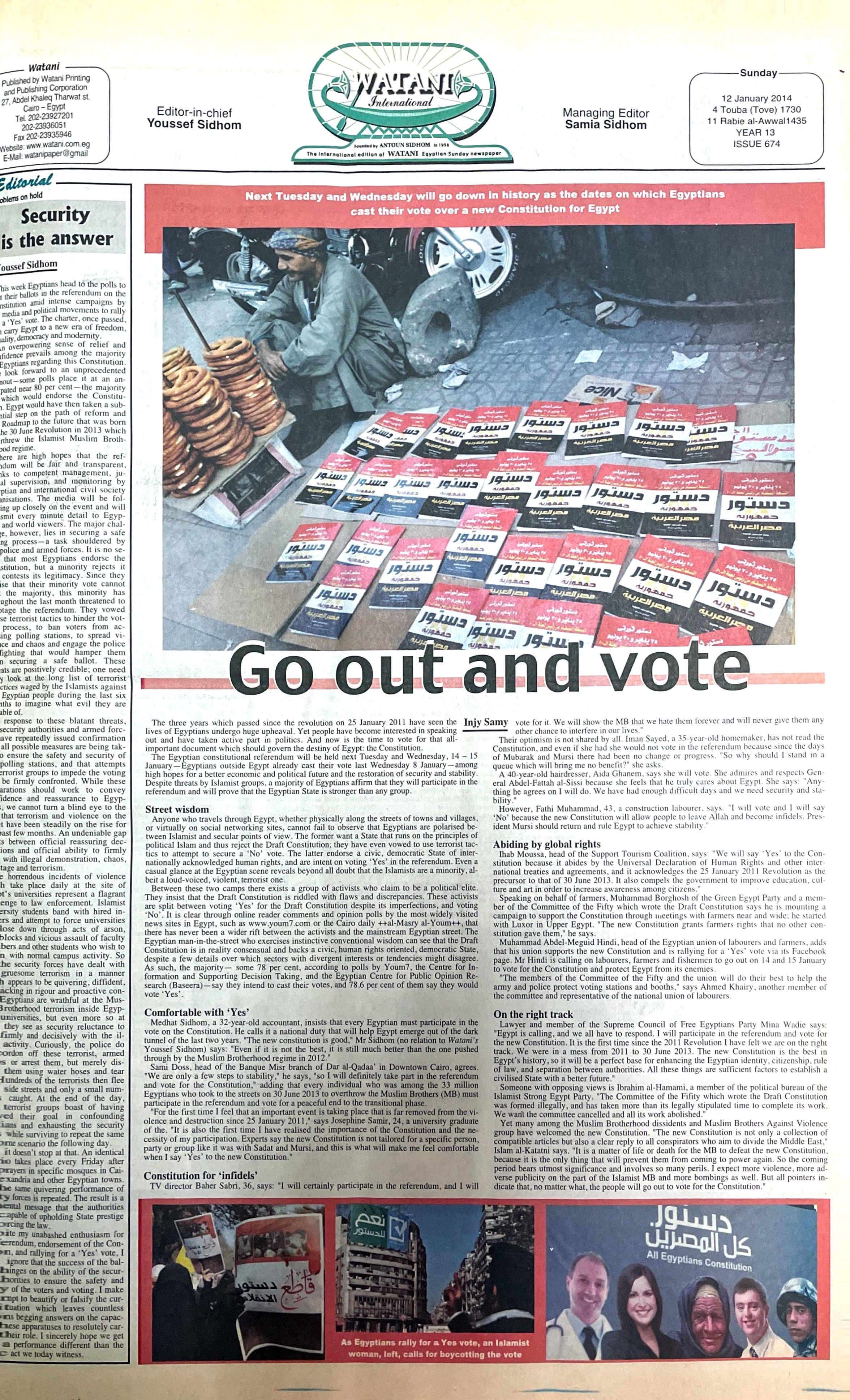 The following landmark was to be the presidential elections which Major General Abdel-Fattah al-Sisi, who had gained the trust of the majority of Egyptians, decided to run for. He gained permission from the military and gave up his military position in order to do so. The elections were held in May 2014; Sisi won 96.91 per cent of the vote, and was handed the presidency by Mr Mansour. Watani International paid tribute to Mr Mansour as a singular Interim President in a feature titled “A man of all reason”. 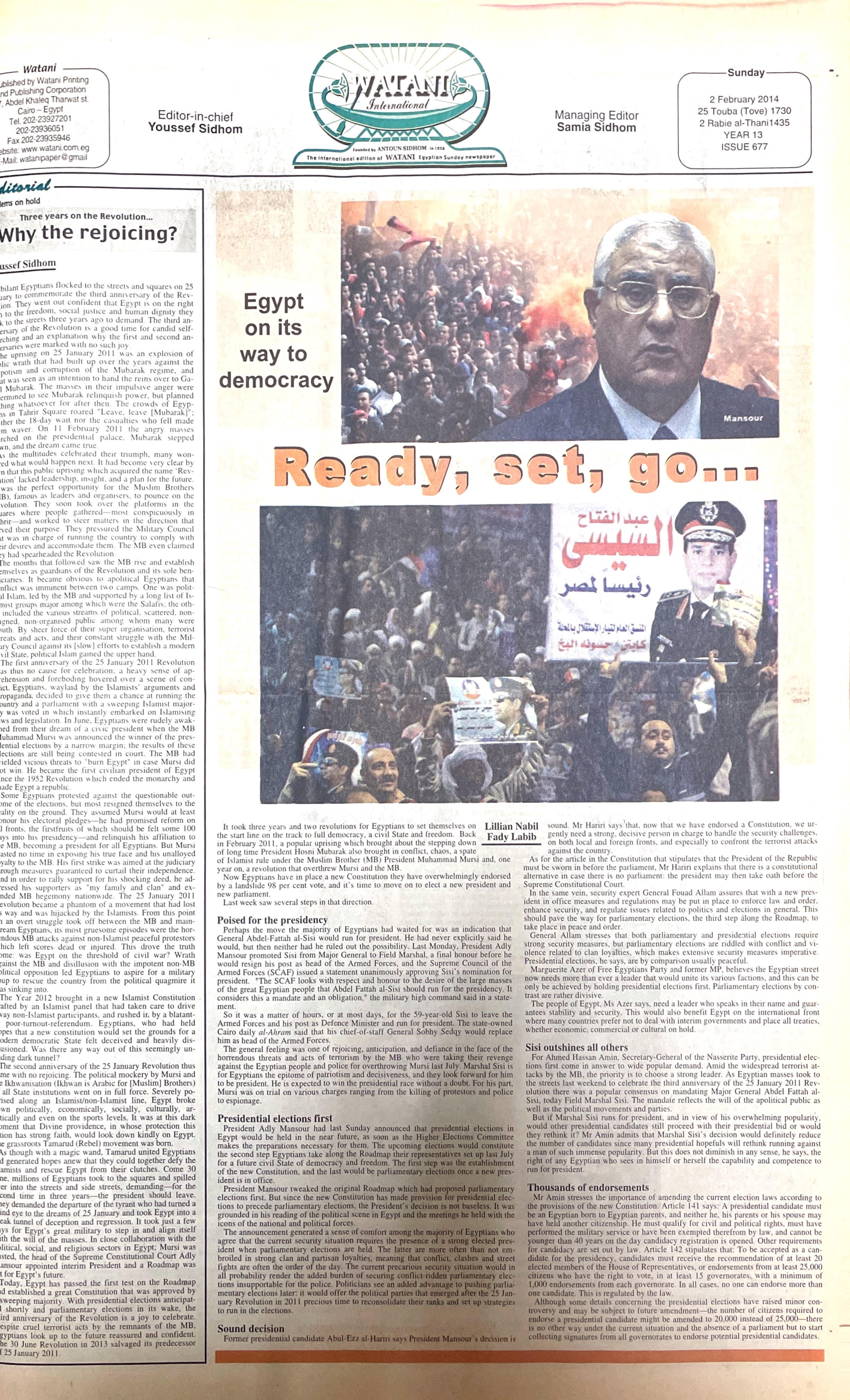 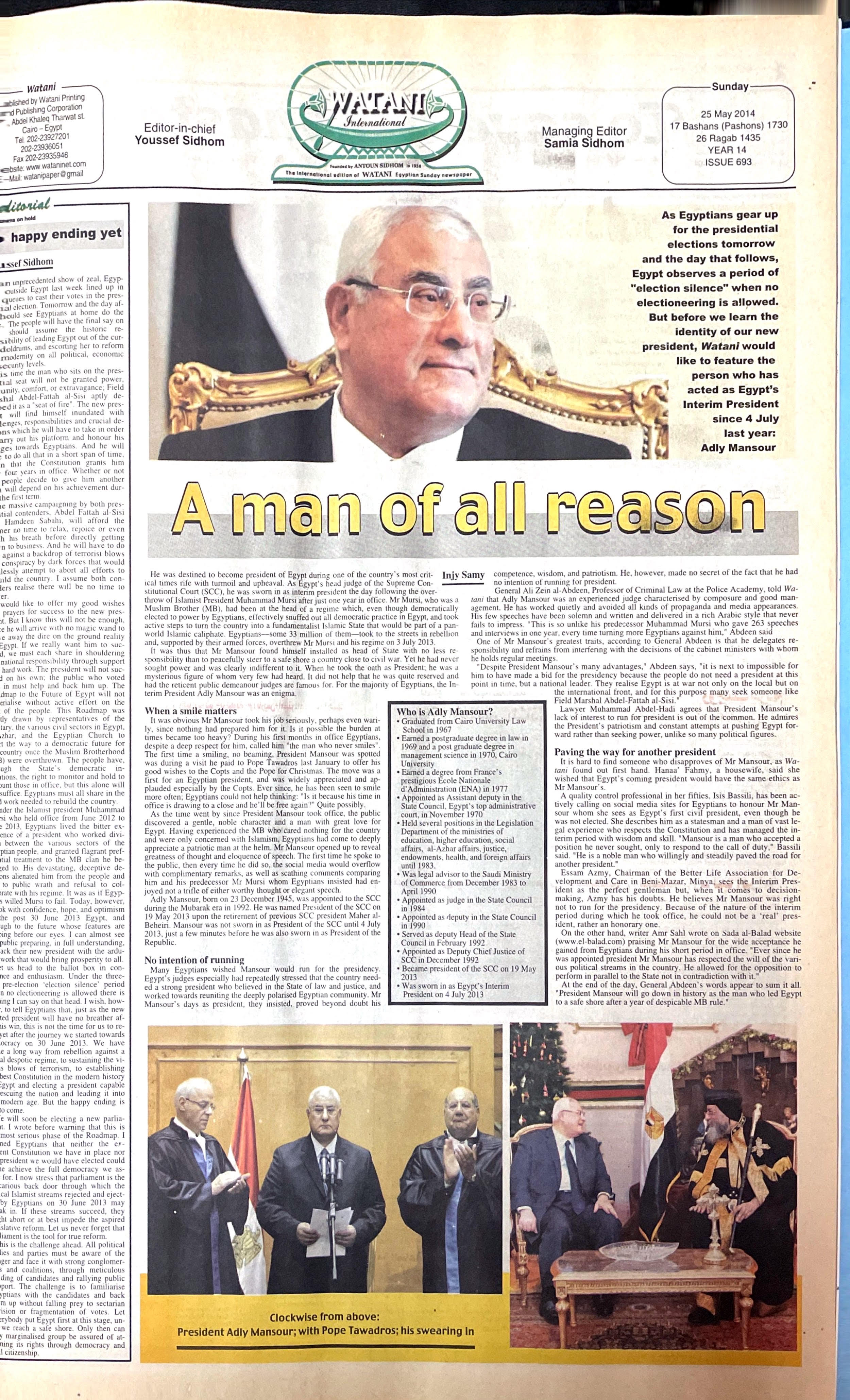 The first priority of the new President was to reinstate internal security and get the economy up and running, both issues had suffered debilitating downturns during the post-Arab Spring years. 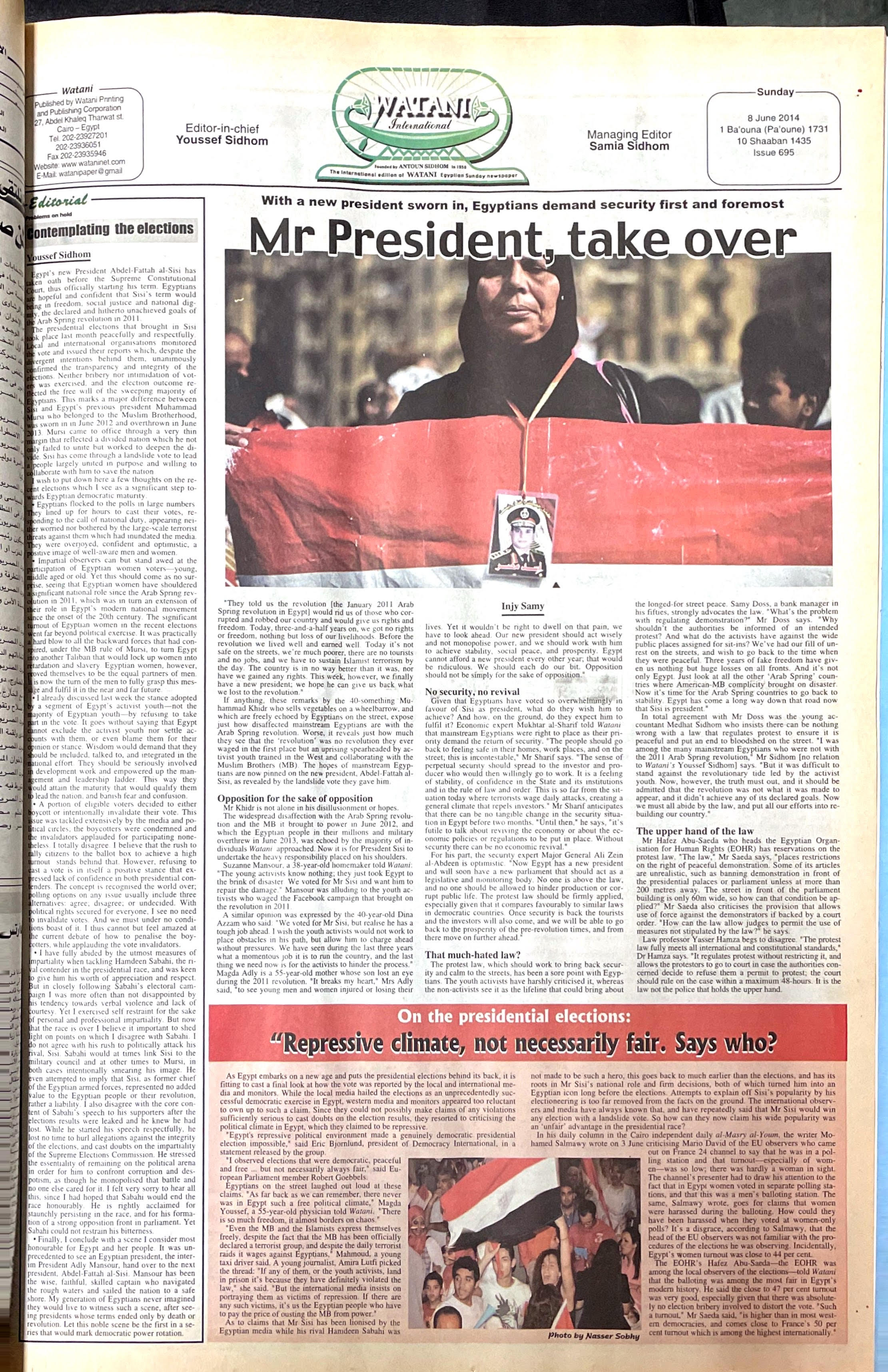 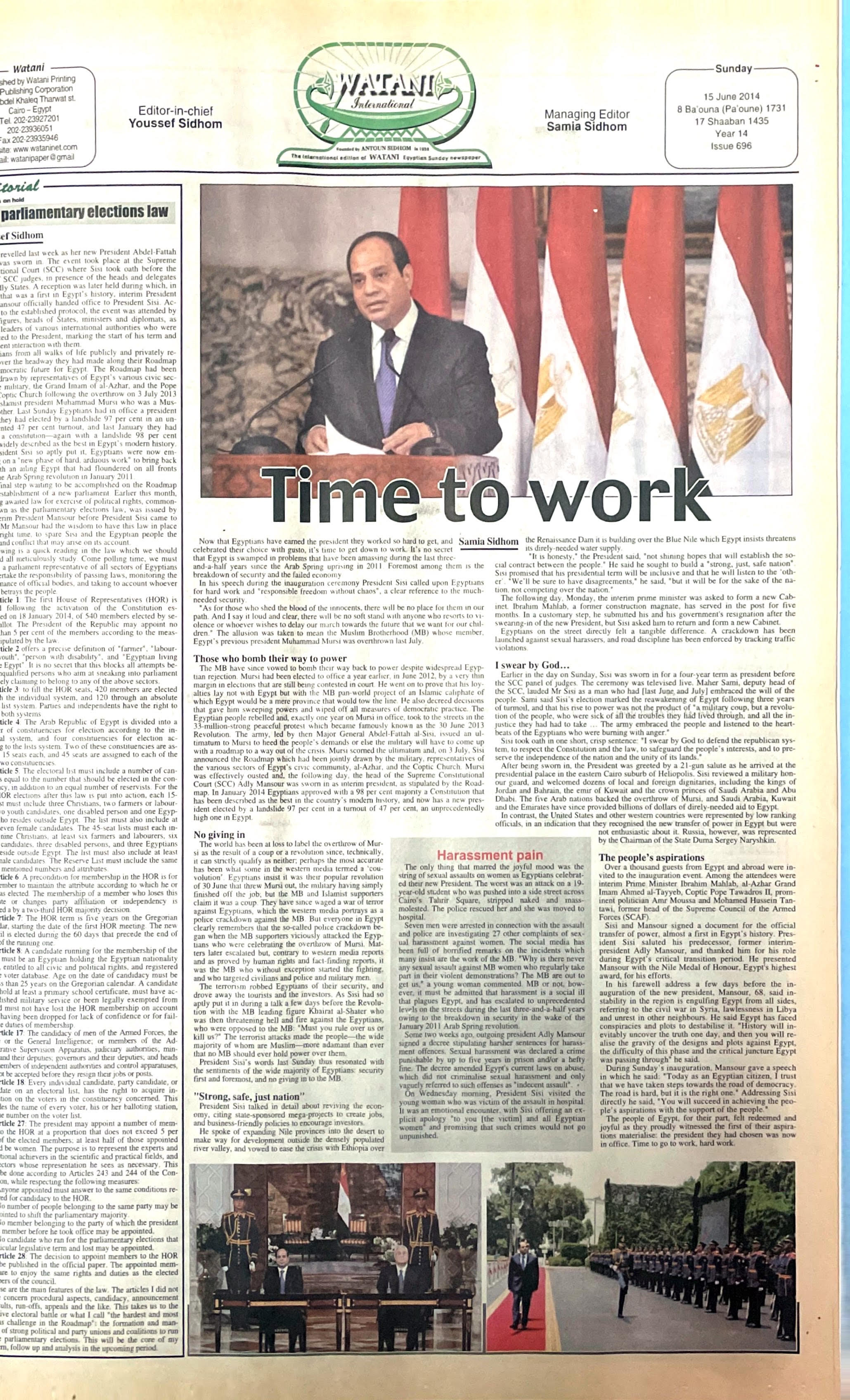 Yet while the government did enormous efforts to reverse the situation, Egypt continued to suffer vicious Islamic terrorist attacks and, in the process, to get condemned on its human rights record by the western world.
Watani International covered these issues in depth. 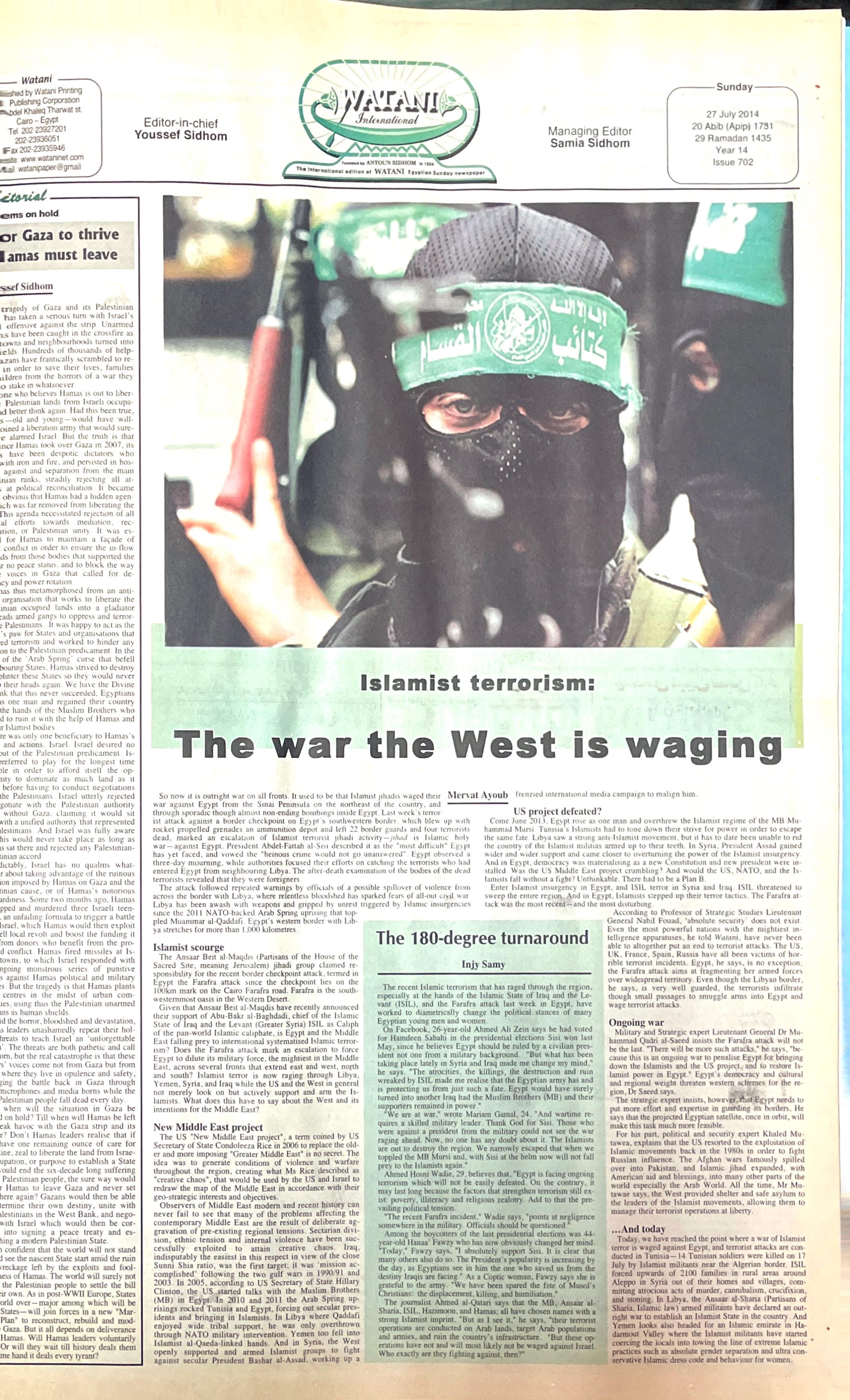 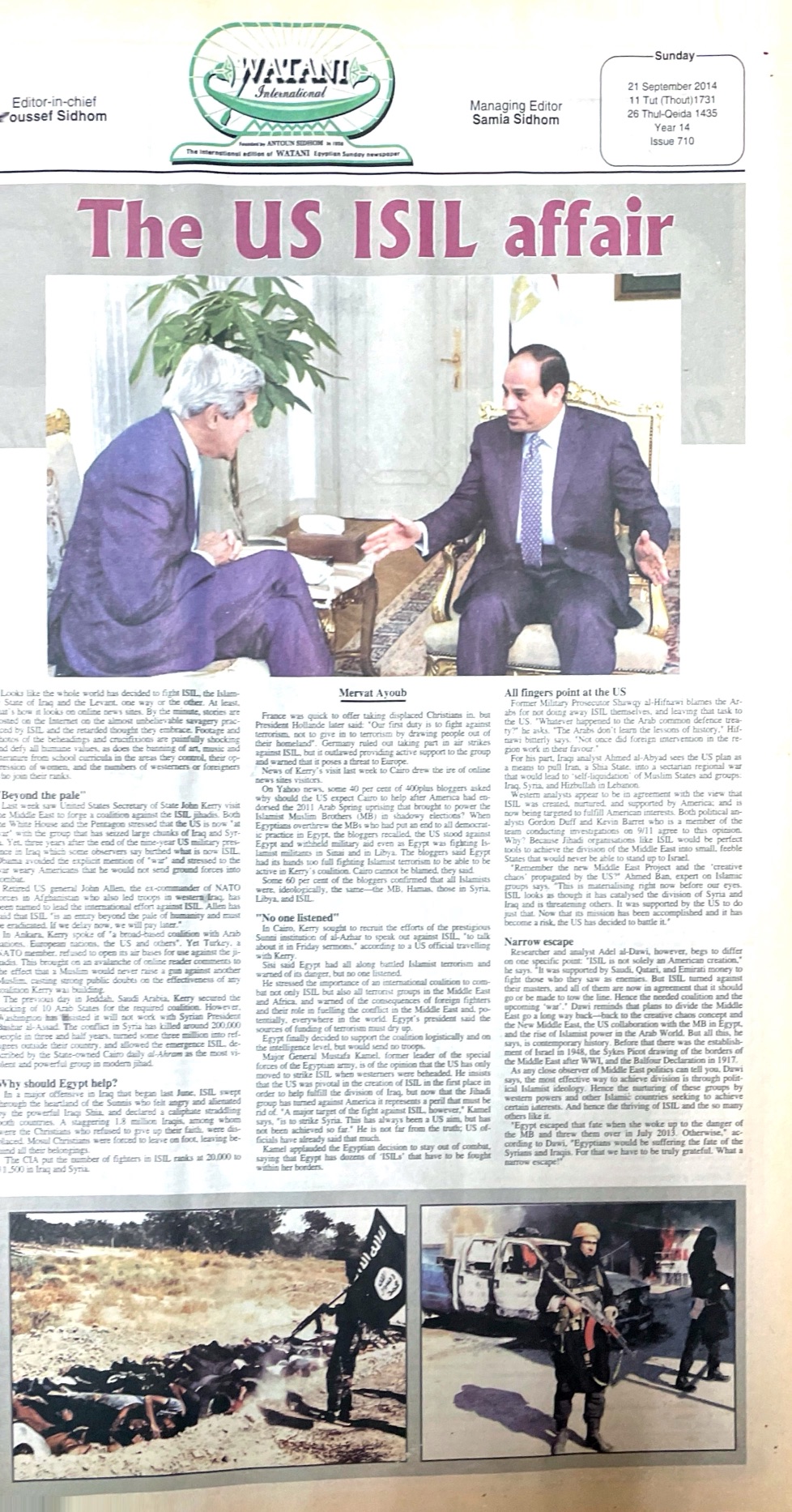 In the meantime, efforts were made to repair damages worked by the Islamists: prominent among these efforts was the greening and restoration of the heritage Orman Garden in Giza which had been ruined by the Muslim Brothers. 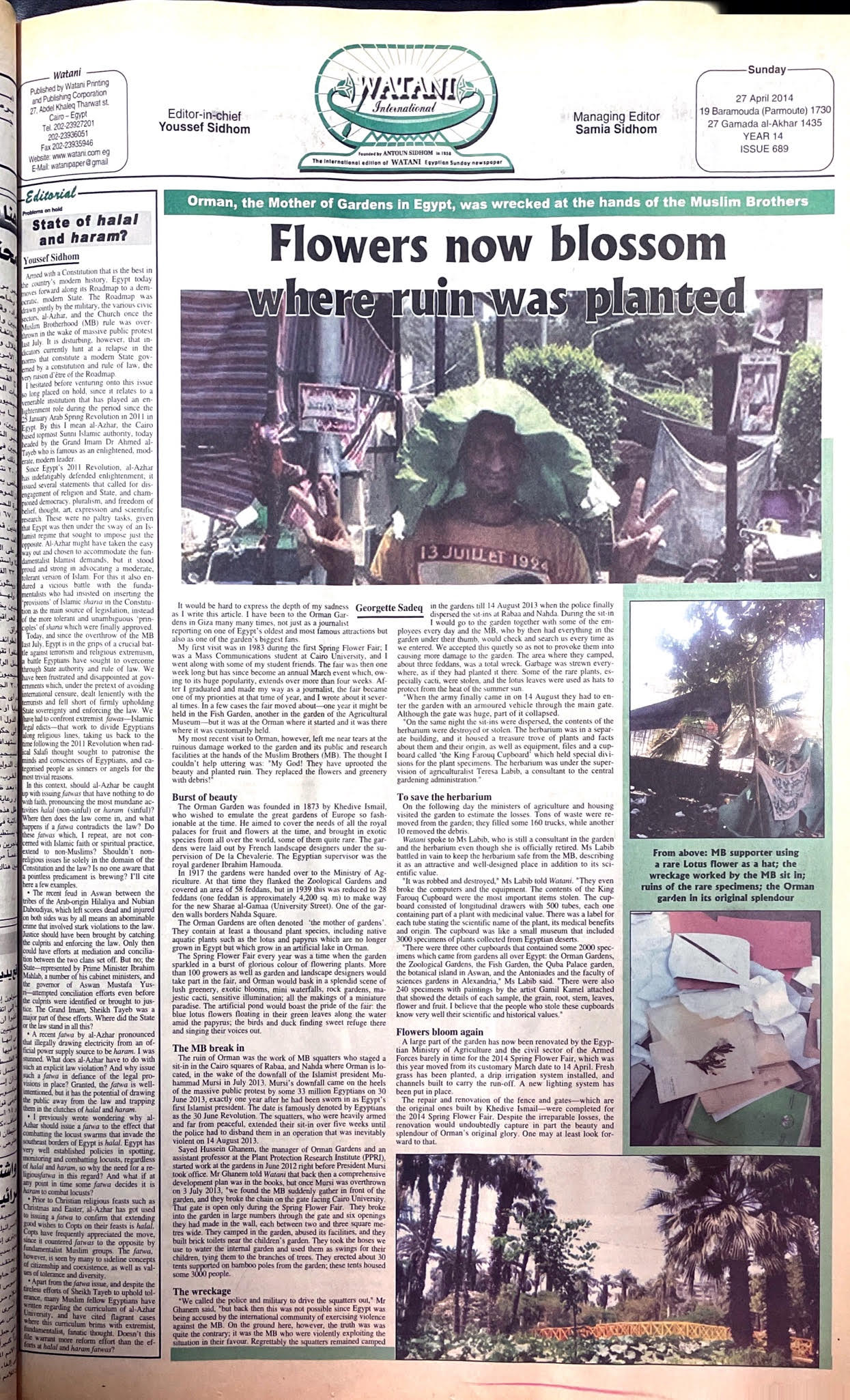 In August 2014, President Sisi launched a campaign to finance the mega project of the New Suez Canal: a project which would deepen and reinforce the canal, dig a parallel waterway on a third of its length, and establish state-of-the-art logistics and commercial centres alongside its banks. A sum of EGP64 billion was needed; it was raised in one week by Egyptians. This was an astounding feat which led Watani International to seek an answer to the question on everyone’s tongue: “Where did all that money come from?”. The project was inaugurated a year later in August 2015; in 2021 the Suez Canal reported a revenue of USD6.3 billion [1 USD = EGP15.6], its highest ever annual earning. 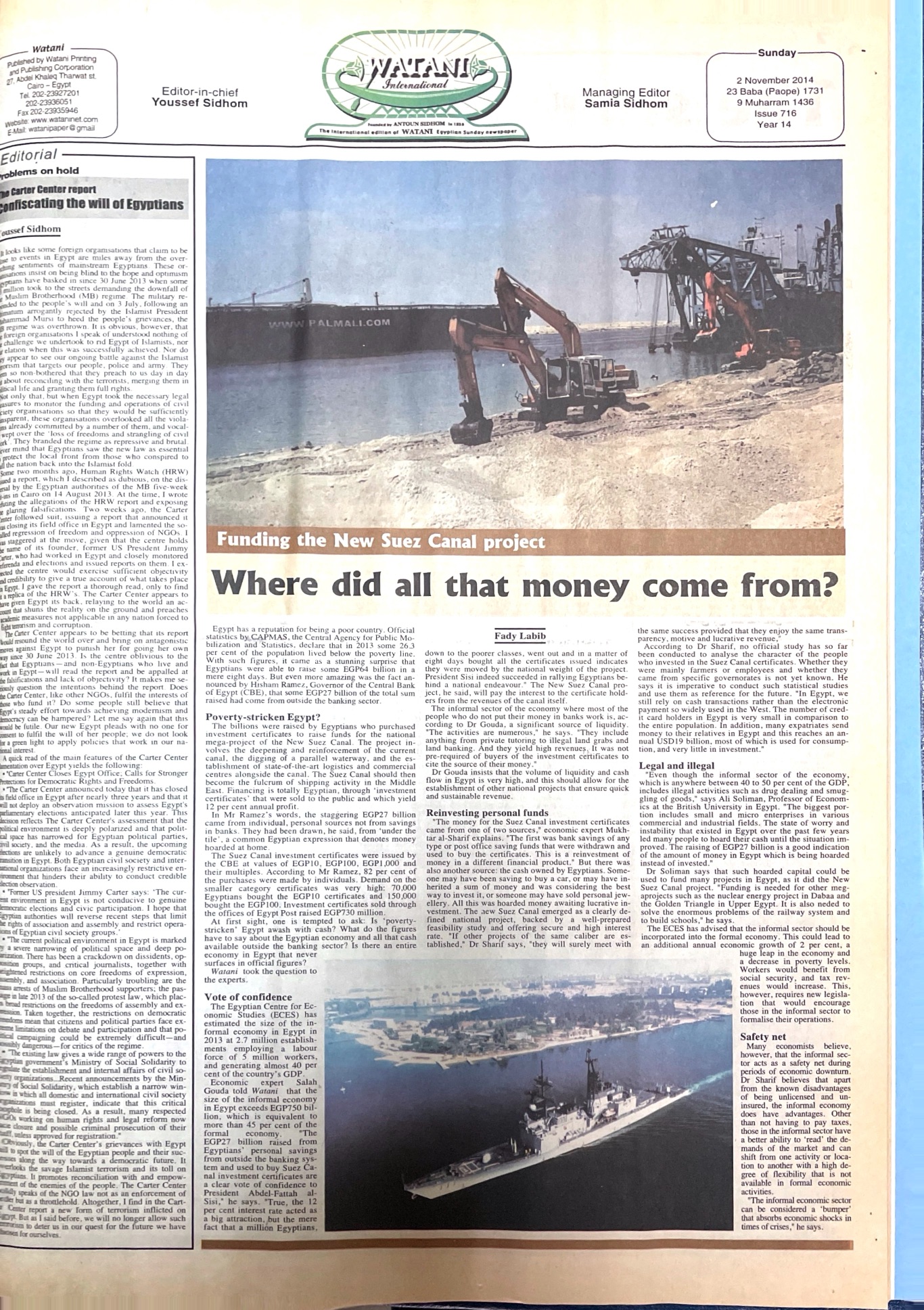 At the same time, Egypt started negotiations with Ethiopia over its Grand Ethiopian Renaissance Dam (GERD), an issue which had greatly suffered under the MB post-Arab Spring regime. To this day, however, Ethiopian intransigence stands in the way of a fair resolution of ensuring Egypt’s annual quota of Nile waters. 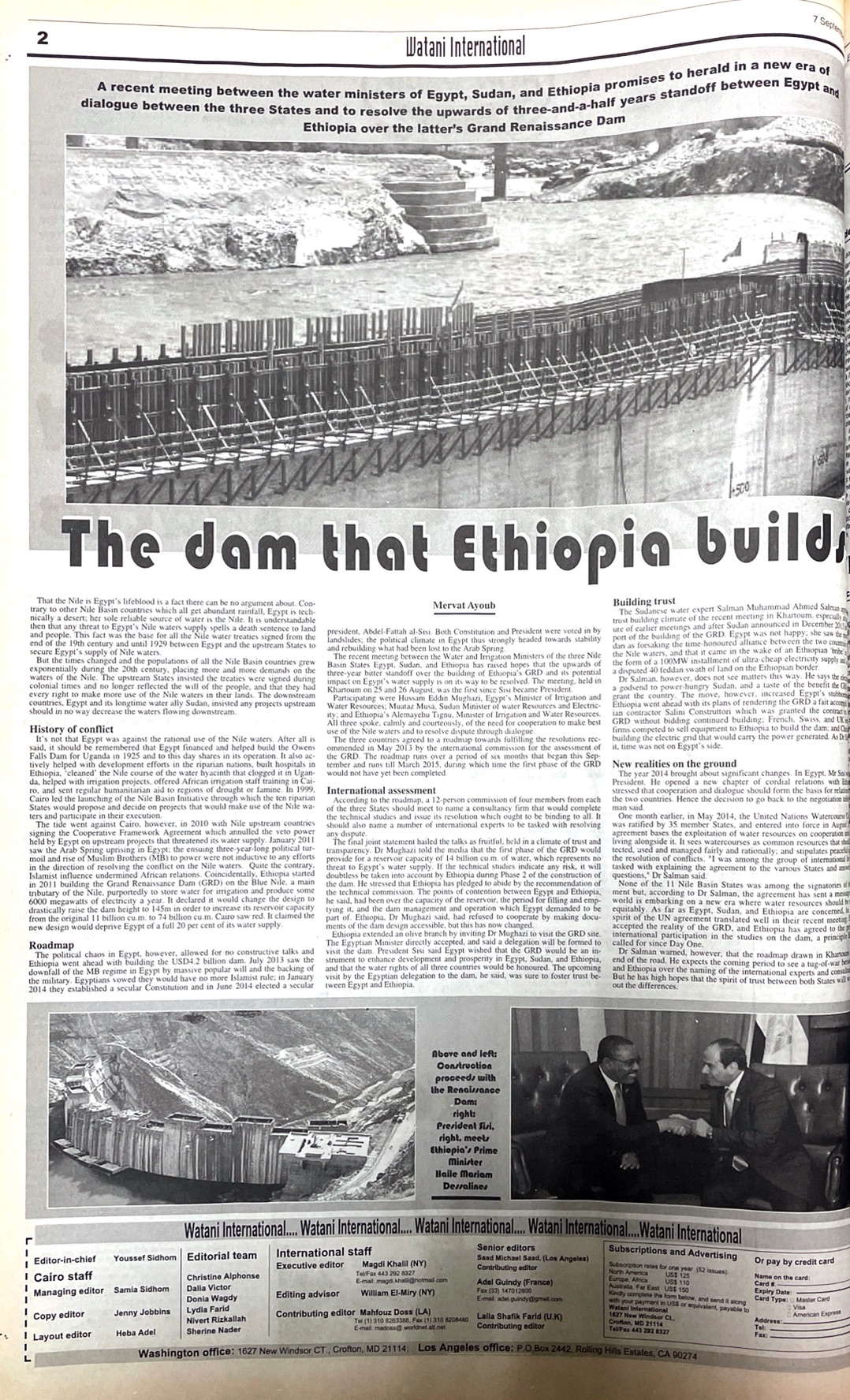 On the Coptic front, the frequency of attacks against Copts decreased but never disappeared, especially in the district of Minya some 250km south of Cairo. Among the coverage provided by Watani International was a study that attempted to answer the question “Why Minya?” by delving into the historical and current conditions of Copts in Minya. 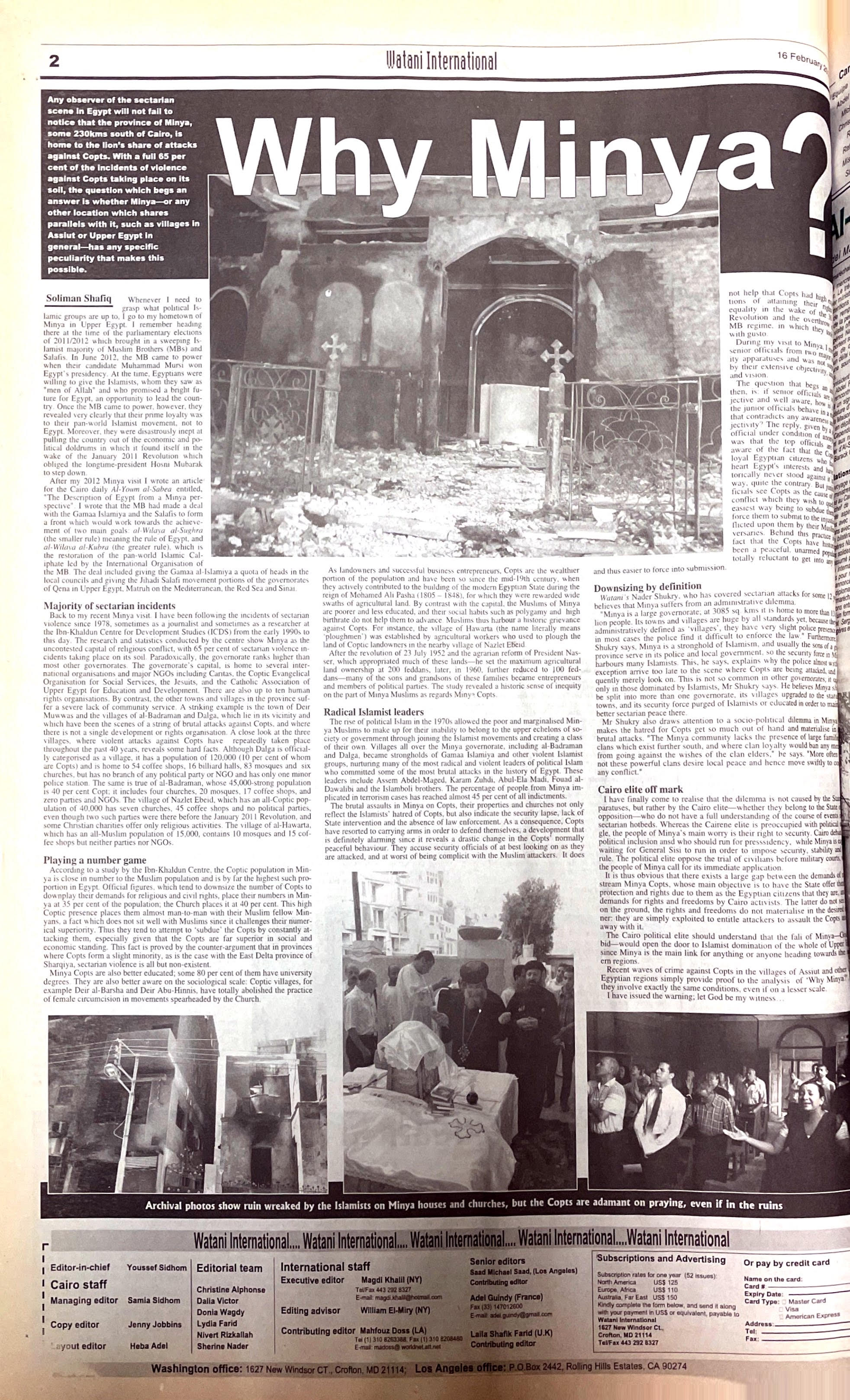 Apart from the attacks against Copts, Watani International reported on the Armed Forces’ efforts at restoring the churches and Coptic institutions ruined by the Muslim Brothers in August 2013, the spectacular restoration by the Ministry of Antiquities of the famous 5th-century Hanging Church in Old Cairo, the Coptic papal headquarters over 1900 years, and a warm hearting event in which the Coptic Church honoured the world renowned Egyptian British heart surgeon, the Copt Sir Magdi Yacoub. 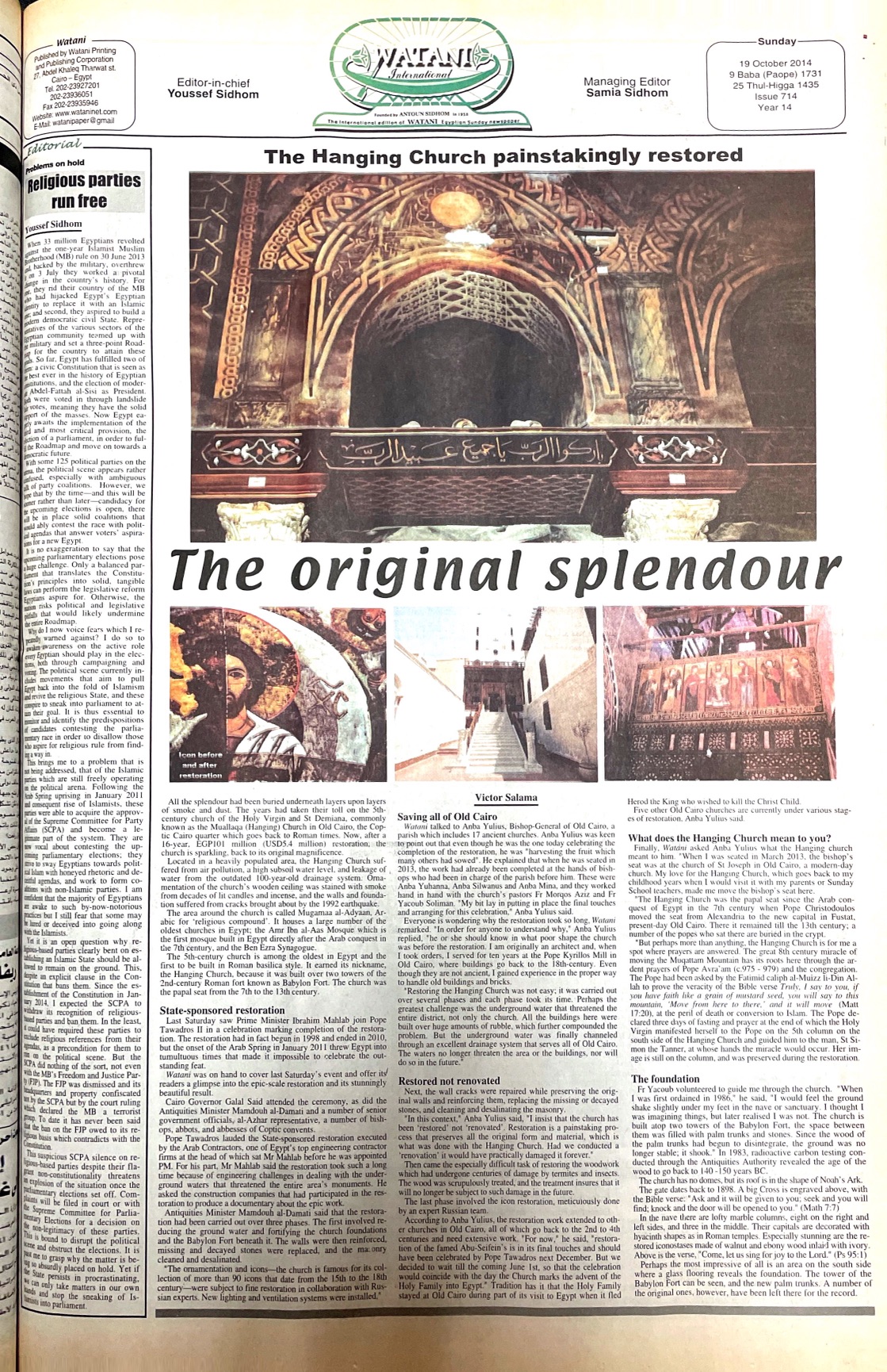 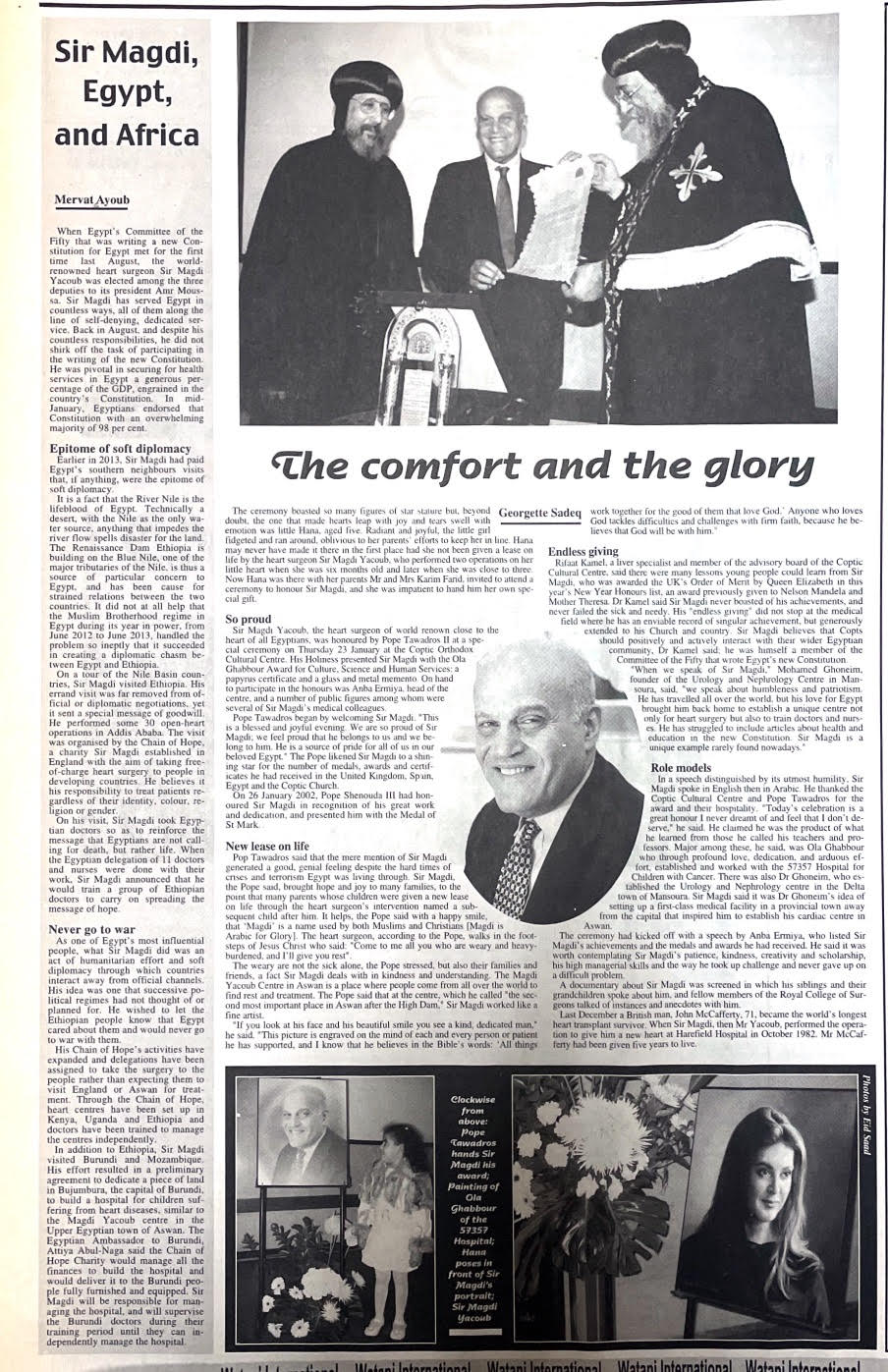 It also extensively covered the historic visit of Pope Tawadros to the Russian Orthodox Patriarch Kirill in Moscow where, in a spirit of love, they renewed older bonds and pledged to work towards closer relations in the future. 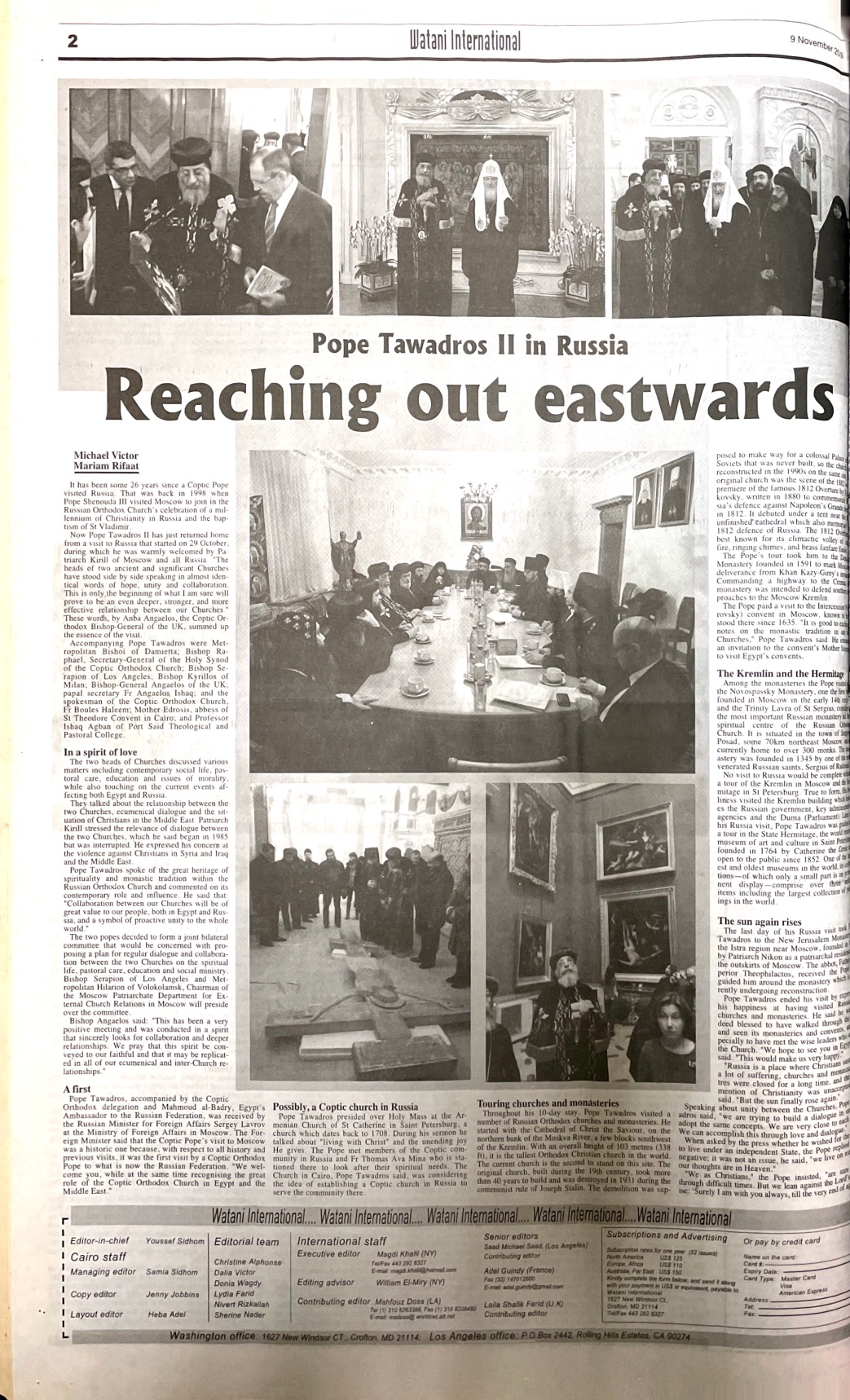 The cultural arena in Egypt was regaining its vitality following hard times under the MB regime. “A comeback of song and dance” reported on the activity and plans of the Cairo Opera House. 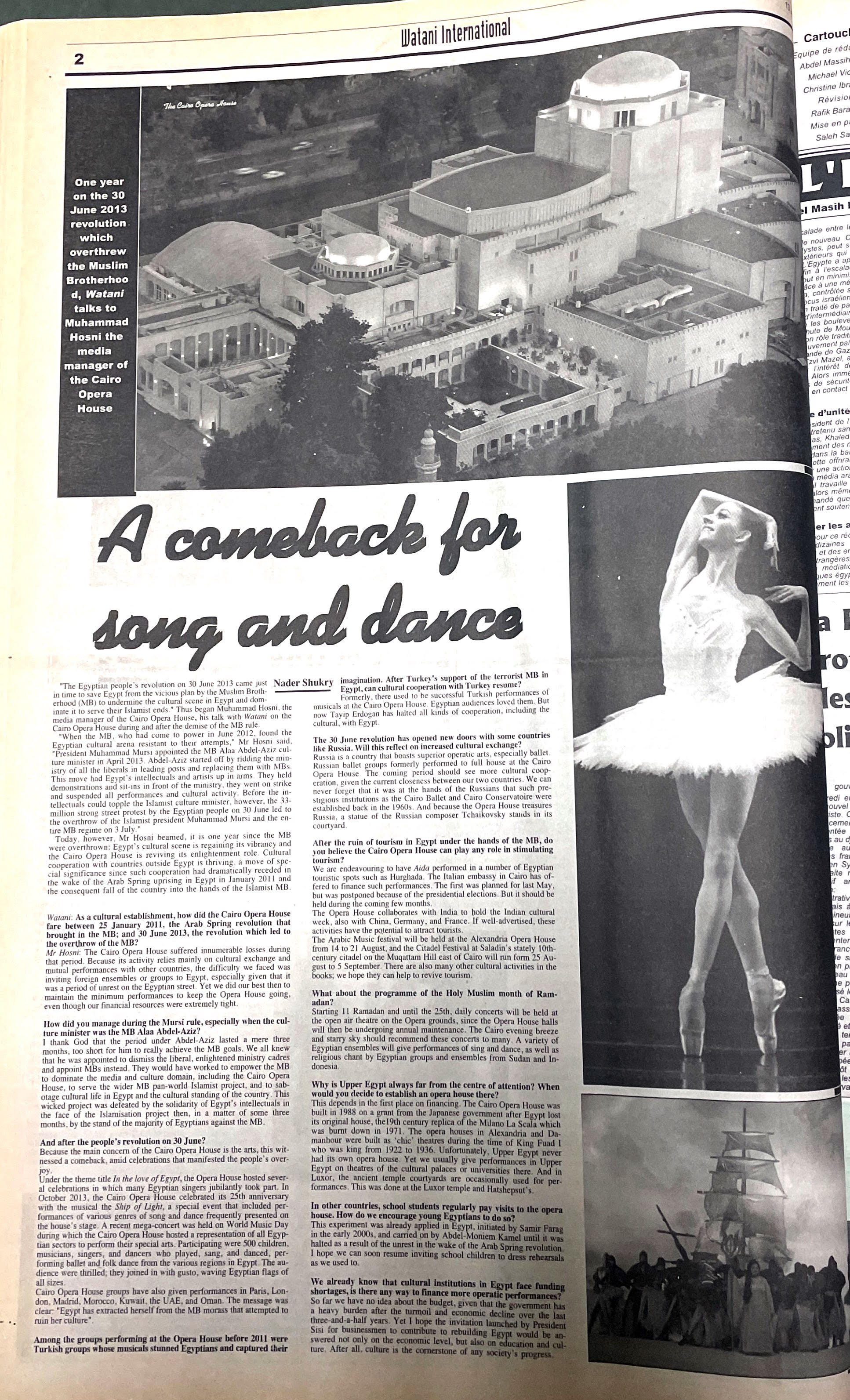 The year 2014 was a sad one for Egyptians and Copts when it came to losing prominent figures who left lasting imprints on Egyptian life and culture.
Just weeks before 2014 set in, iconographer Youssef Nassif (1921 – 2013) departed our world a year following his wife of 66 years Bodour Latif (1922 – 2012), an iconographer in her own right. The couple had worked together, jointly signing their works, and creating exceptional icons that drew on warm, folk tradition. 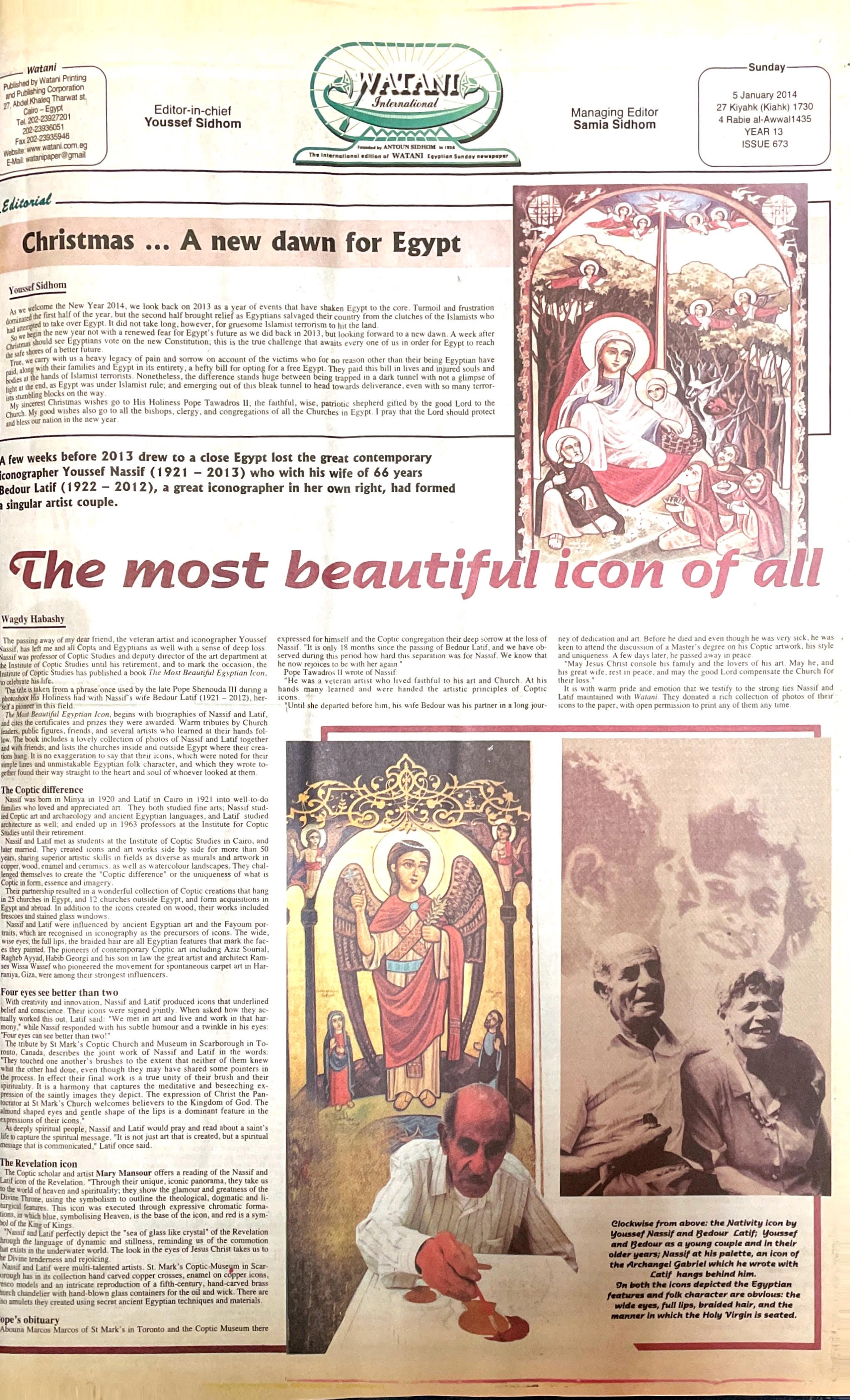 In August 2014, Egypt lost the feminist writer and novelist Fathiya al-Assal (1933 – 2014) and prominent cartoonist Mustafa Hussein (1935 – 2014). A month later, humorist and satirist Ahmad Ragab (1928 – 2014) passed away and, together with Hussein, was deeply mourned by Egyptians. The duo had intimately worked together to produce some of the most memorable meaningful cartoons on Egyptian life and predicaments. 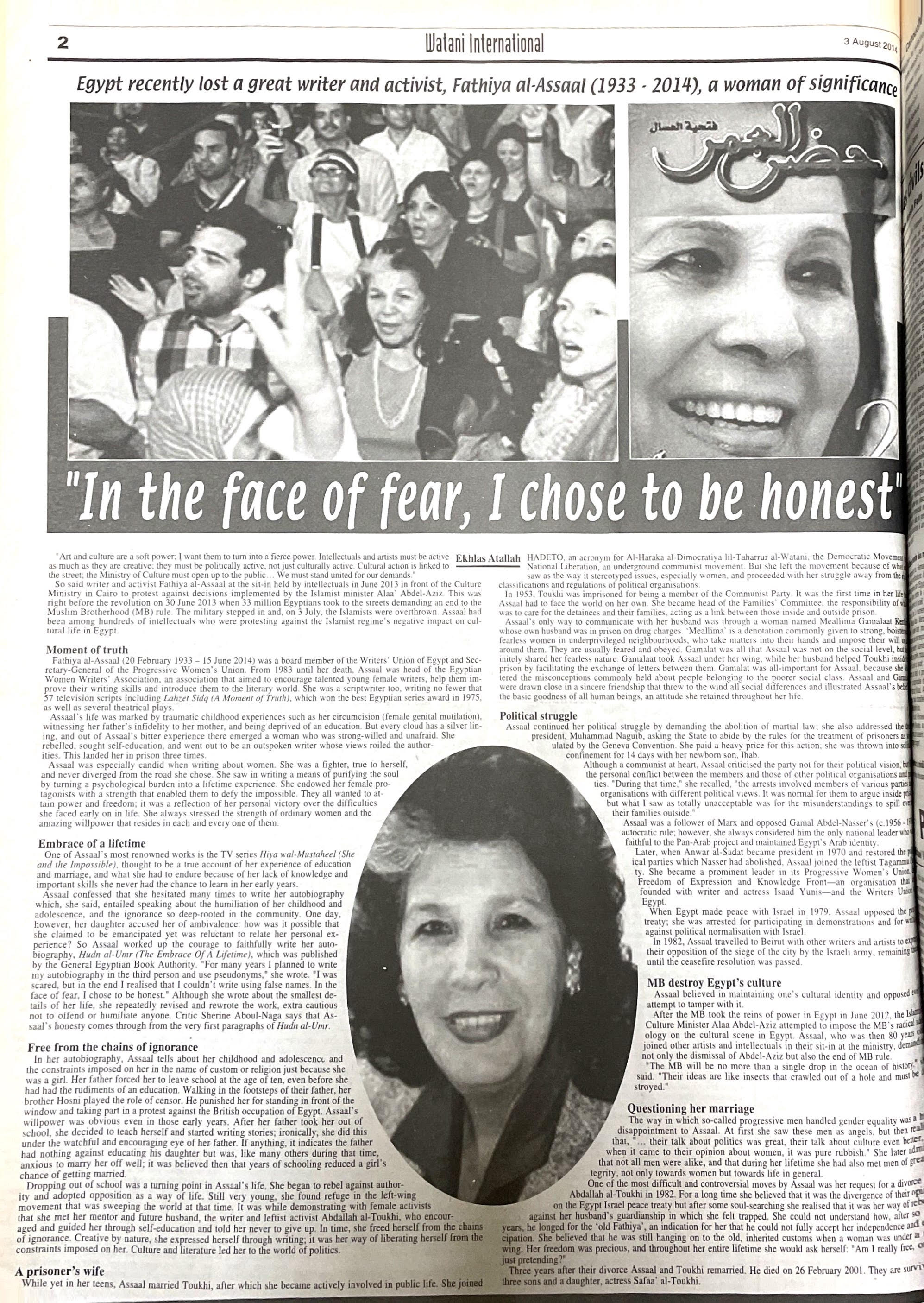 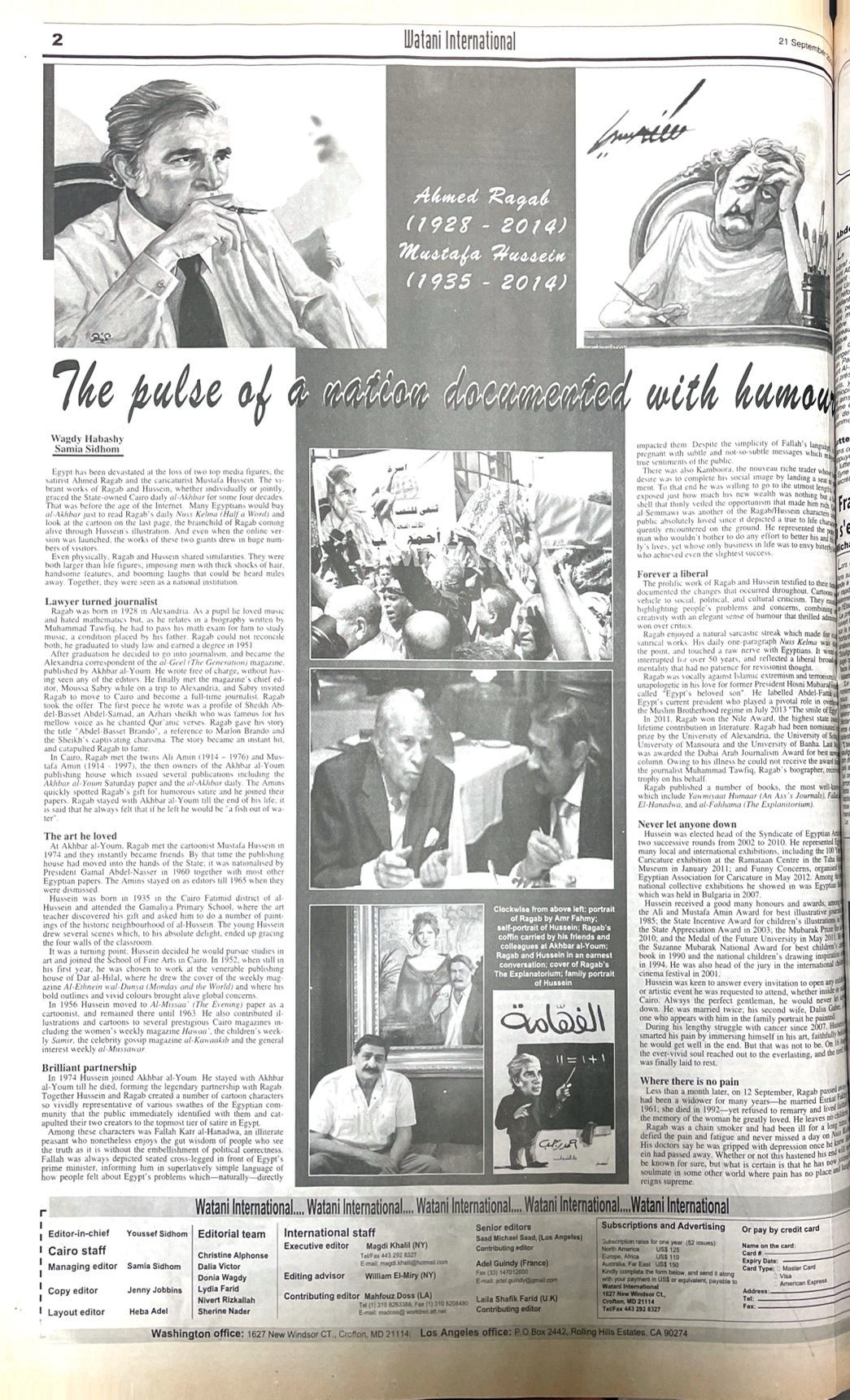 Among the most painful departures, however, was that of Anba Mikhail (1921 – 2014), Metropolitan of Assiut for 68 years. Anba Mikhail was a character of astounding spiritual stature, who led his flock with remarkable wisdom and courage. No wonder he was labelled “Lion of Upper Egypt” [Assiut, some 350km south of Cairo, is the capital city of Upper Egypt], and was widely loved. 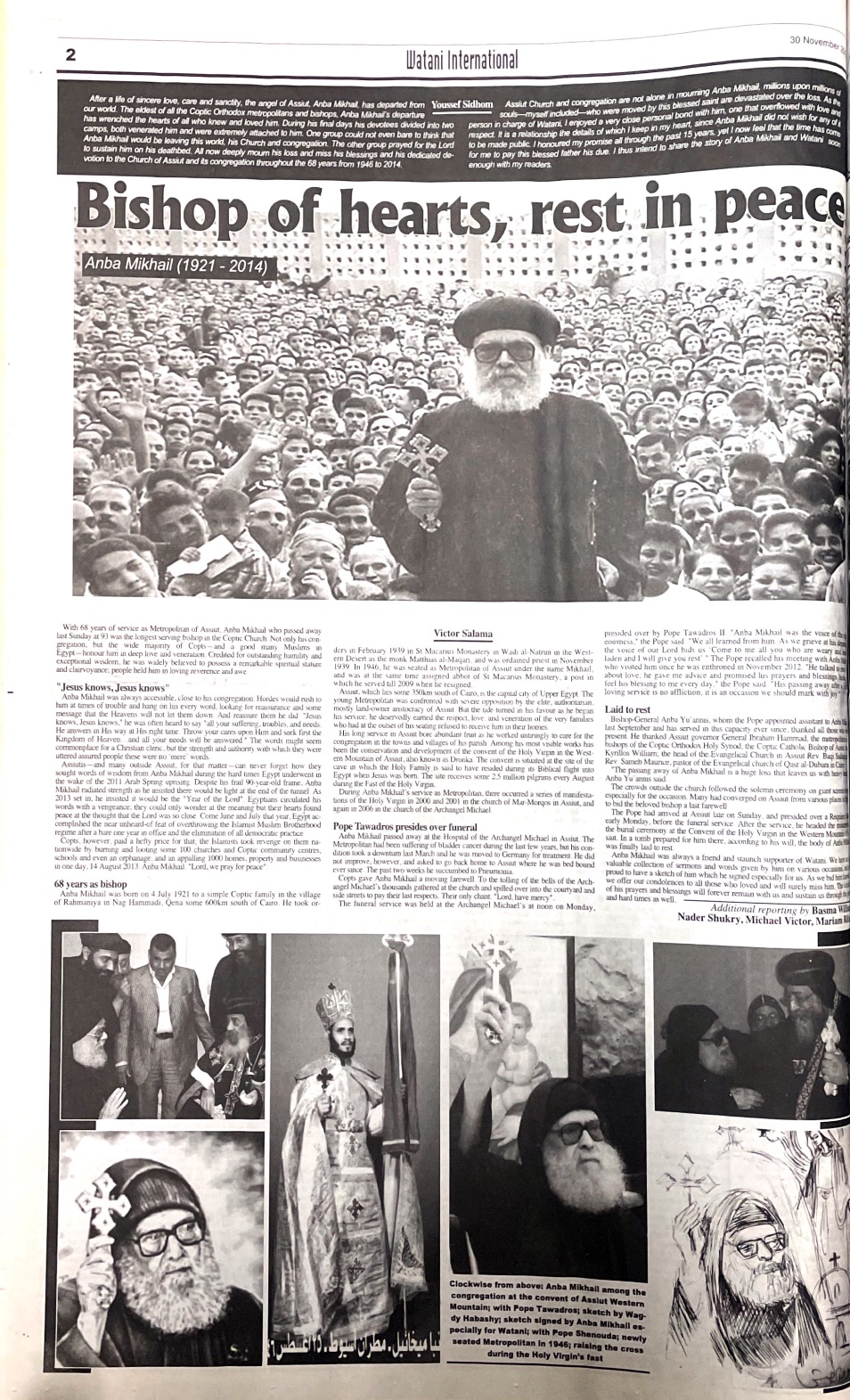 Egyptians are Resilient and resolute

Islamist threats to kill Sisi and the Copts

A man of all reason

Profile of a man … and a nation

Where did all that money come from?