“Sohag holds a very special place in my heart,” said Pope Tawadros II while on his visit to the southern region of Sohag, some 550km south of Cairo. “I spent my childhood years here,” he said, “and my first recollections of church are from here.” 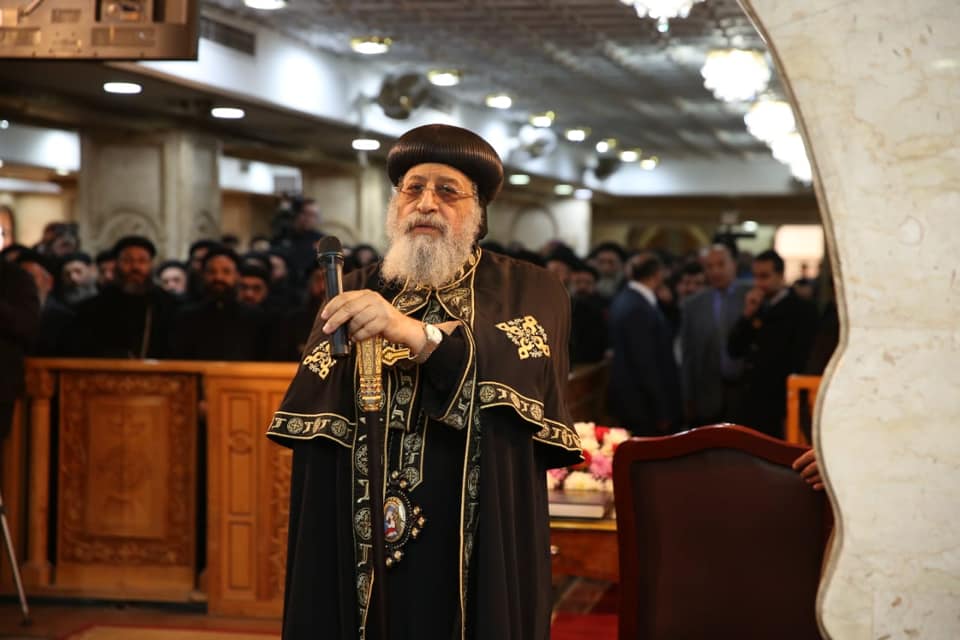 Pope Tawadros II embarked on a five-day pastoral visit to Sohag on Saturday 11 January 2020. It included visits to the six dioceses in the region: the diocese of Sohag, al-Manshat, and al-Maragha; diocese of Girga; diocese of al-Baliana and Dar as-Salam; diocese of Akhmim and Saqolta; diocese of Tahta and Juhaina; and diocese of Tema. The Pope also visited two monasteries: the monastery of the Holy Virgin in Akhmim Mountain east of Sohag; and the monastery of Anba Shenouda the Archimandrite, famous as the White Monastery, west of Sohag.

At Sohag airport, Pope Tawadros was received by General al-Hassan Mahmoud, Security Chief of Sohag, and senior security officers and officials of the governorate. 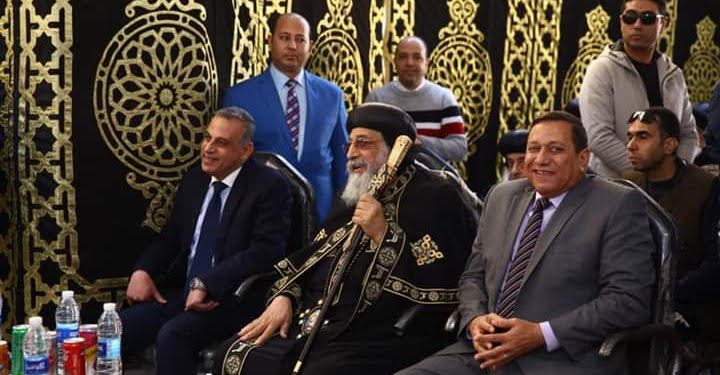 He was jubilantly welcomed by a procession of Church scout drummers and deacons chanting the time honoured Coptic melodies used to receive kings and high priests since the time of ancient Egypt.

Gem of a school 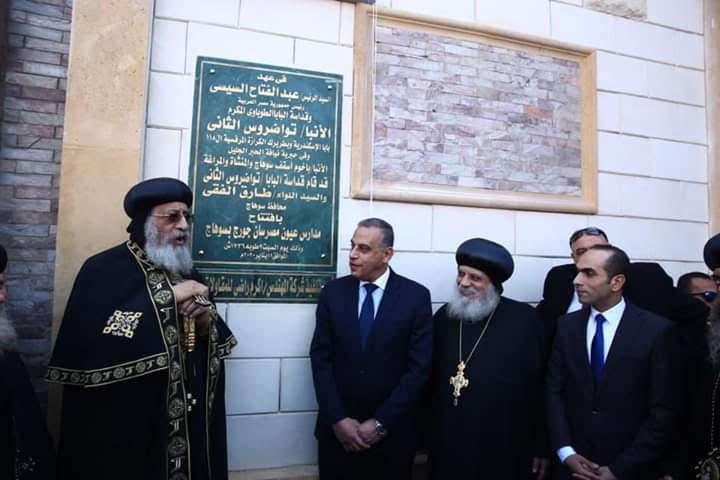 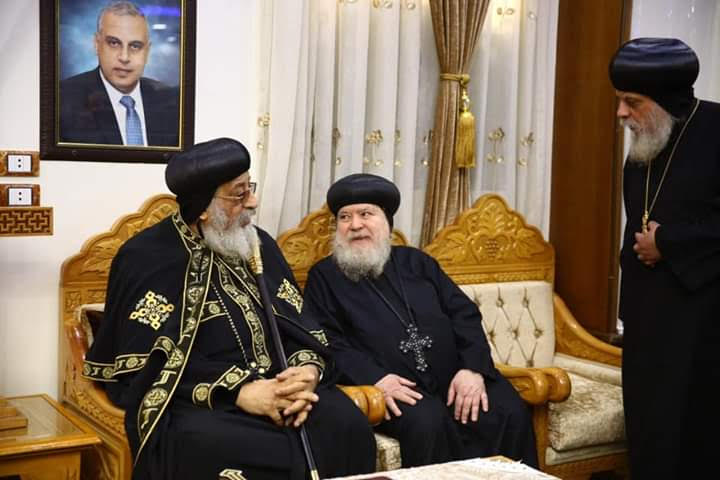 The Pope praised St George’s, describing it as “a giant Egyptian educational establishment” and “a source of great pride”, saying it was a service offered by the Church to the entire community. 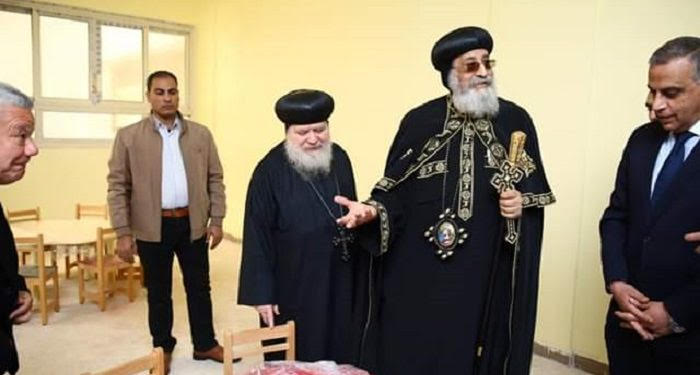 Noteworthy is that the Coptic Orthodox Church has behind it a time-honoured tradition of education, which began centuries ago with small literacy and numeracy schools run by churches. In the mid-19th century Pope Kyrillos IV, patriarch from 1854 to 1861, established the Coptic public schools for boys and for girls, among the first in Egypt. Coptic schools grew and spread nationwide, acquiring a reputation of top quality education for students of all religions; graduates went on to become leading figures in Egypt. In the 1960s, these schools were ‘nationalised’ and placed under control of the Ministry of Education; the Church retained a minimal supervisory role over them. In the 1990s, however, many of the schools were returned to the Church, and the Church was allowed to go back to the education field. Since then, it has modernised its old schools and has been establishing new state-of-the-art ones.

Governor Fiqi held a dinner banquet in honour of Pope Tawadros. Attending were senior administrative and security officials, as well as representatives of civil associations. The Pope was accompanied by a number of bishops and priests. 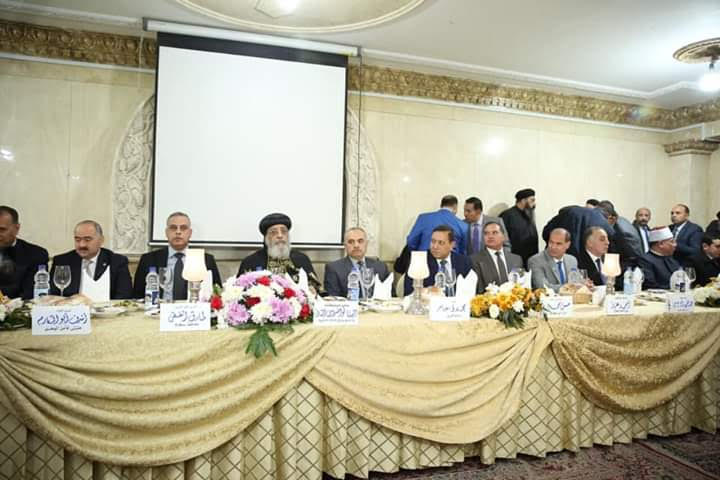 President of Sohag University, Ahmed Aziz, visited the Pope at the church of Mar-Girgis and presented him with the shield of the university. Dr Aziz expressed his appreciation and that of the people of Sohag for Pope Tawadros, citing the Pope’s famous patriotism and love of Egypt. He recalled the Pope’s words in the aftermath of the nationwide burning of some 80 churches, among which was Mar-Girgis’s in Sohag, by the Muslim Brothers in August 2013. Back then, the MB were avenging themselves against Egypt, in the form of its Copts, for their 30 June massive revolution which led to the overthrow of the Islamist regime that had come to power in Egypt on the wings of the 2011 Arab Spring. The Pope had then said: “A homeland without churches is better than churches and no homeland”. 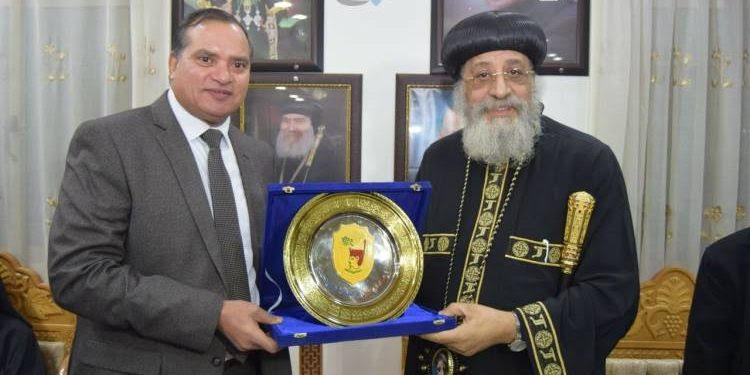 As he reached Sohag Bishopric, Pope Tawadros was warmly received by a throng of Copts who filled al-Thaqafa Square before the Bishopric Church of Mar-Girgis (St George), cheering him with ululations of welcome. He thanked them and expressed true joy at being among them, saying they were always in his prayers. 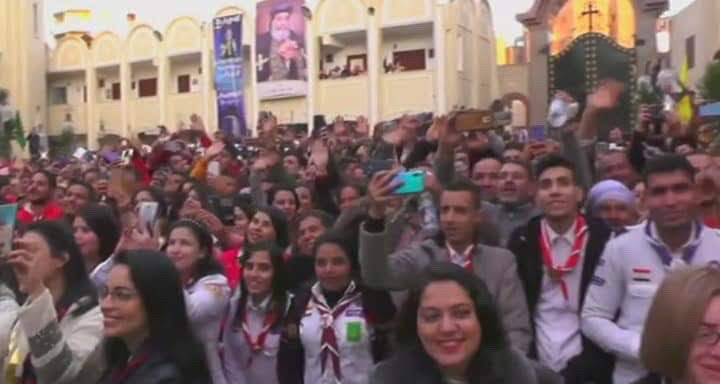 The Pope held a landmark meeting with the priests of the six dioceses of Sohag.

“I see this meeting,” he said, “as an excellent start to our pastoral visit. 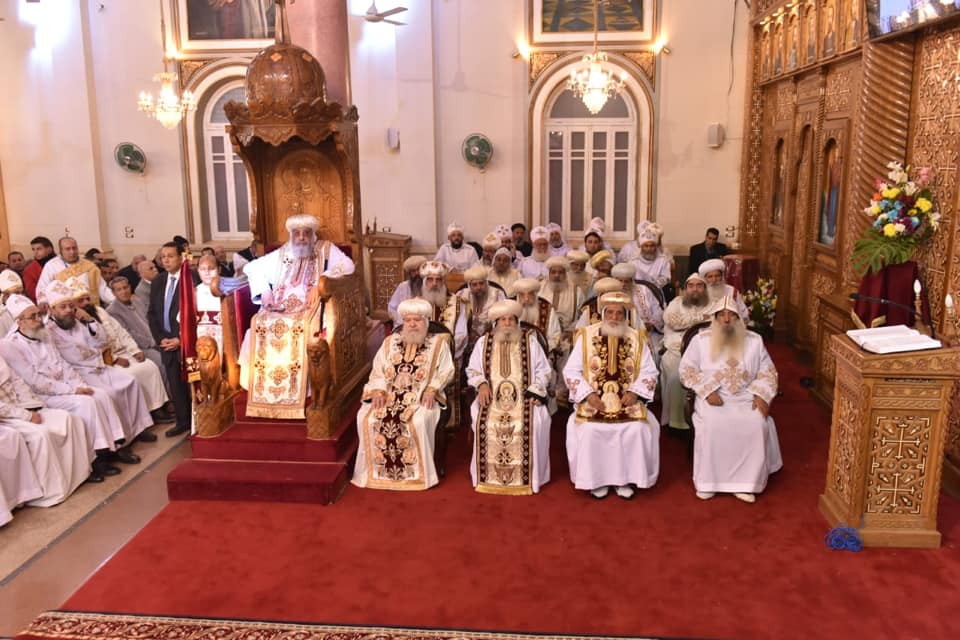 “Dear priests,” he said, “Your role is pivotal in pastoral service. In my name and on behalf of the bishops and metropolitans [of the dioceses in Sohag], I thank you for your dedicated service in the towns, villages and hamlets of this region.

“It is the priest who prepares and brings to the Church its spiritual men and women, servants, deacons, bishops, and patriarchs.

“Priesthood is a ‘precious gift’ granted by the Church to all of you. The congregation has been entrusted to your care, you are responsible for every member of it; the day will come when the Lord will ask each of you what he did with that responsibility.” 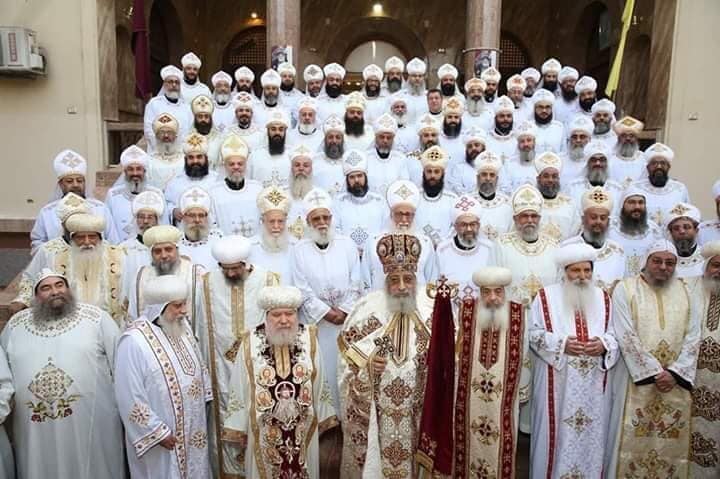 Pope Tawadros spoke of three triads of aspects that characterise a priest: three features, three exercises, and three skills. The three features: A priest is a witness for Christ; a teacher of His gospel; and a source of love to all, love that draws from Christ’s love on the Cross. “This is not just talk,” the Pope said, “it is tried and experienced. The Bible tells us: ‘Because the love of God has been poured in our hearts by the Holy Spirit that was given to us” (Rom 5:5). The three exercises: Retreat to nurture your soul; prayer to deal with the variables of the times; and fasting to build the spirit of your priesthood. And the three skills: time management to balance personal spiritual nurture and service to the congregation; creative thinking on all religious, secular, scientific, and modern knowledge levels; and effective, compassionate interaction with people. 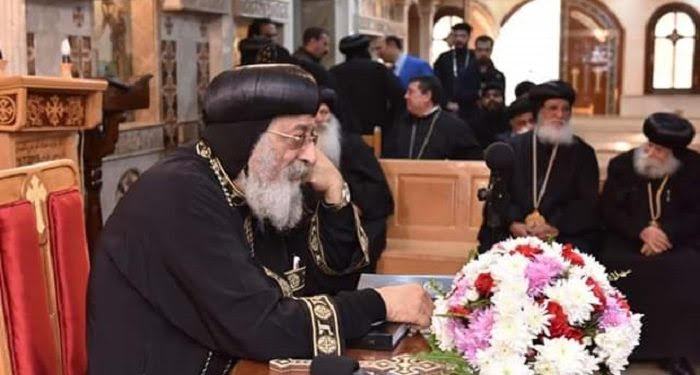 The Pope gifted the priests with copies of a book newly-published by the Church under the title “The Priests’ Orchard”. It is modelled, he said, after the Coptic Church’s time-honoured “The Monks’ Orchard” which focuses on the spiritual and miraculous experiences of monks. “It made me ask,” he said, “why is there no such book focusing on priests?” Upon which a number of blessed priests from Cairo took it upon themselves to collect data for that book in the form of quotes, experiences, and services by priests. “The ‘Priests’ Orchard’ saw light only two days before I came to you in Sohag,” the Pope noted.

Pope Tawadros consecrated two churches at Sohag Bishopric Church, that of Mar-Girgis which includes three altars dedicated to St George, St Peter and St Paul, and St Anthony and St Paul the Hermit; and the church of the Holy Virgin. 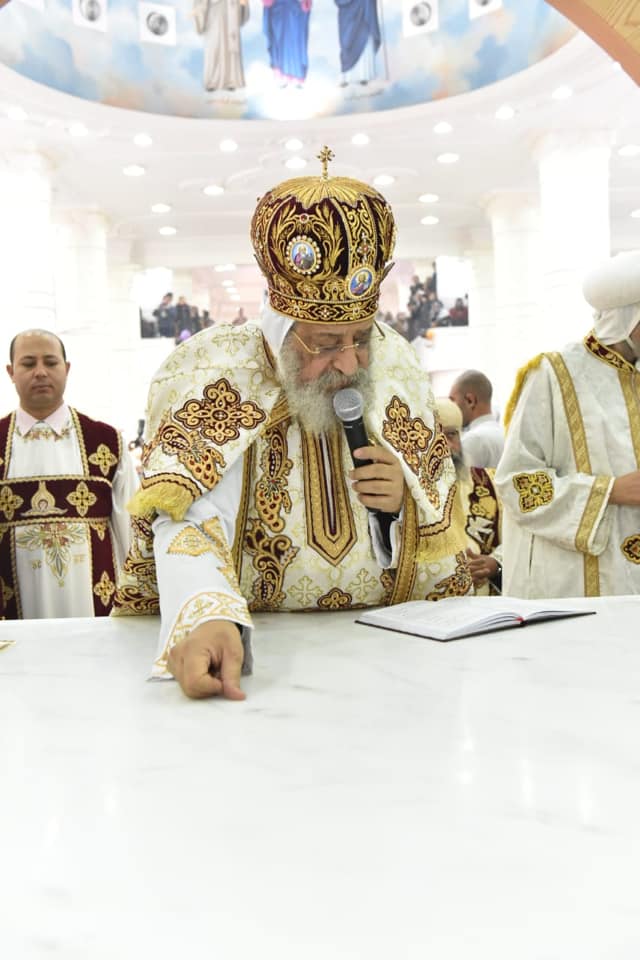 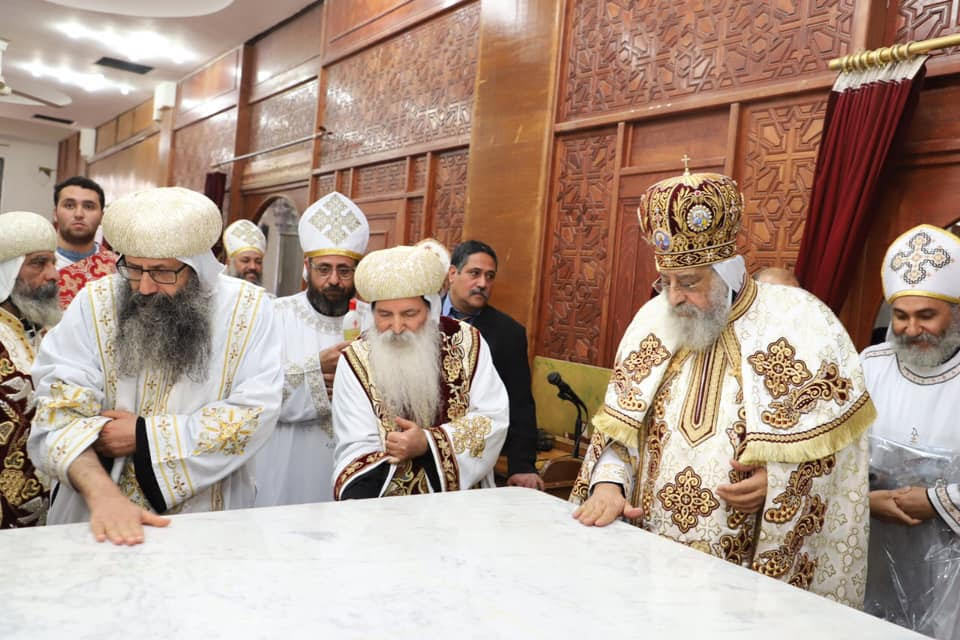 After the consecration ceremony, Anba Bakhoum presented the Pope with a portrait painted of him. 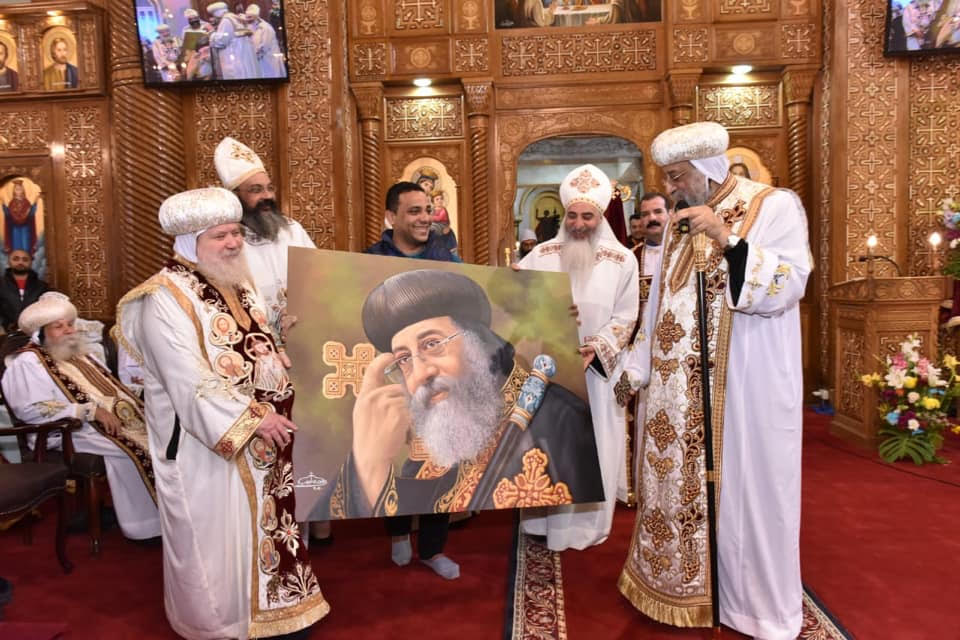 From the city of Sohag, Pope Tawadros moved to Girga, the governorate’s largest town and an important economic centre, where he was met by the Bishop, Anba Mercurius. The Pope consecrated the church of the Holy Virgin in Girga. After recent renovations, the Holy Virgin’s now houses two churches: the first on the ground floor dedicated to the Holy Virgin and the Children of Bethlehem; and the second on the upper floor dedicated to the Holy Virgin and St Joseph. The Pope blessed the marble plaque that stood at the entrance carrying the date of consecration, and anointed the icons and iconostasis of the two churches. 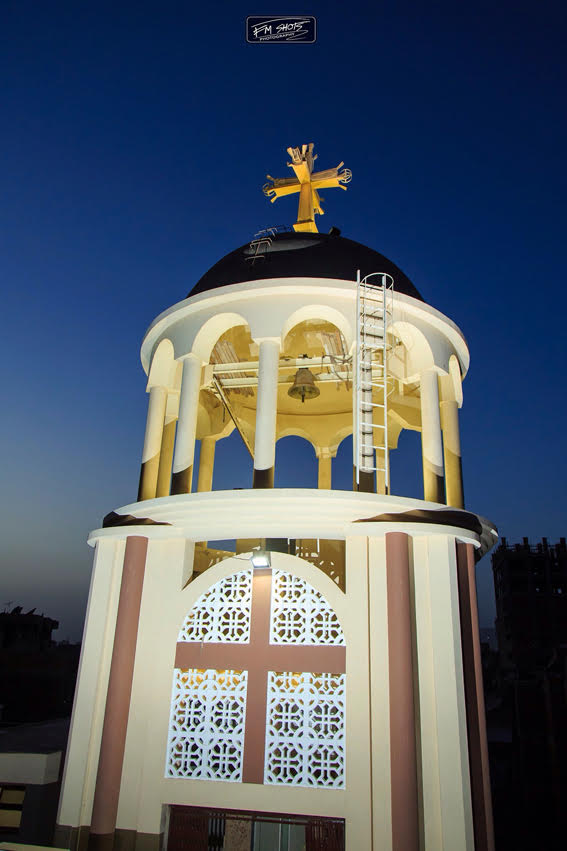 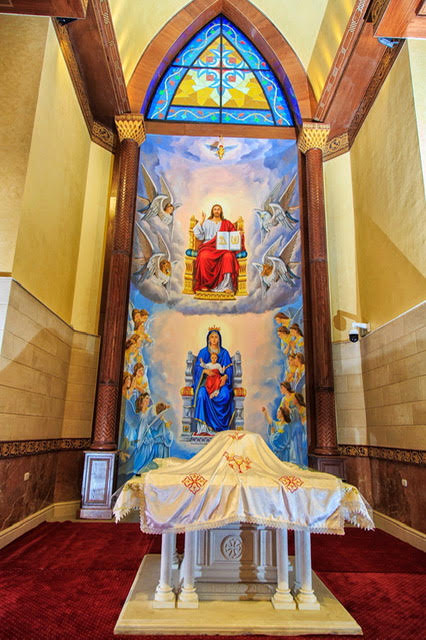 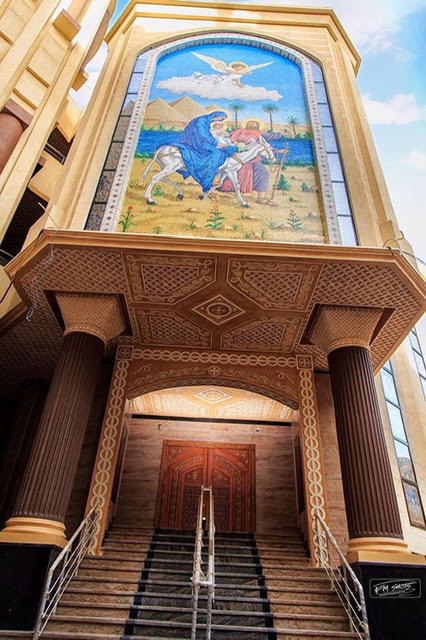 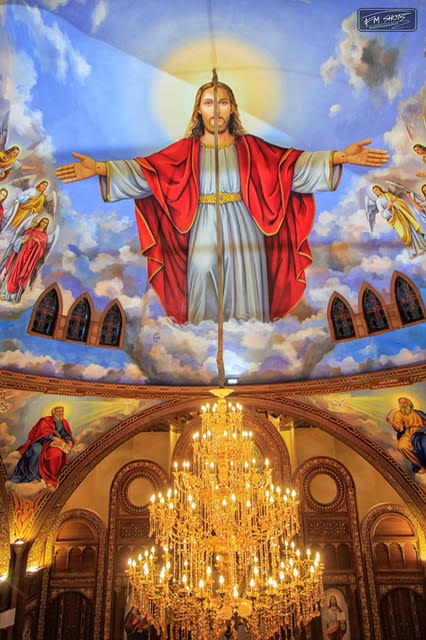 “This church is very beautiful,” Pope Tawadros told the congregation. So should your souls be. This is our prayer: that it would be ‘on earth as it is in heaven,’

“May the Lord bless you all, and give you joy,” the Pope concluded.

“The Lord shall bless our people”

The Pope left Girga to Baliana where he was received by Anba Wissa, Bishop of Baliana and Dar as-Salam, accompanied by the clergy and some 2000 members of the congregation of the diocese. He spent the day meeting and praying with the congregation to whom he said: “The Lord is sure to bless our Coptic people. We pray for that every day.” 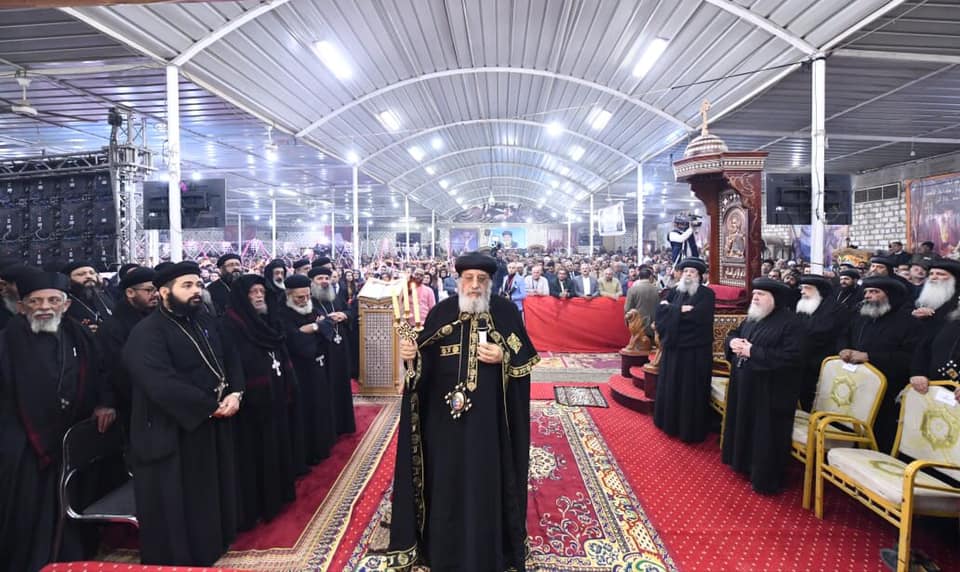 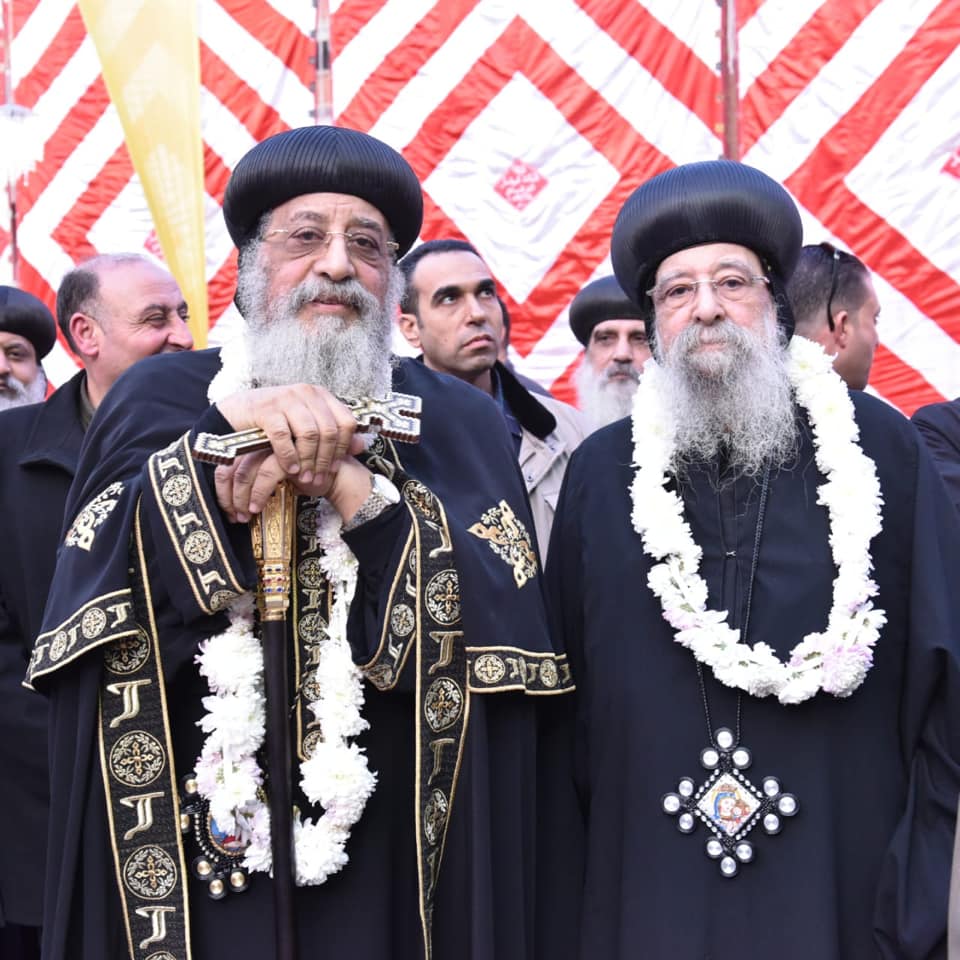 From there, Pope Tawadros headed to Akhmim, the 4000-year-old village famous for its tapestry weaving which saw its golden age during the Coptic era in the first eight AD centuries.

In Akhmim, Metropolitan Anba Psada welcomed Pope Tawadros and led him to the church of St Peter and St Paul. The congregation warmly and excitedly welcomed the Pope; a number of senior members giving speeches to that effect. The Pope gave a word on ‘Joy’ in everyday life, “as I am joyful to see you all now,” he beamed. The meeting concluded by handing the Pope a souvenir gift, what other than a piece of handmade Akhmim textile, in this case a bedcover embroidered with the Pope’s initials. 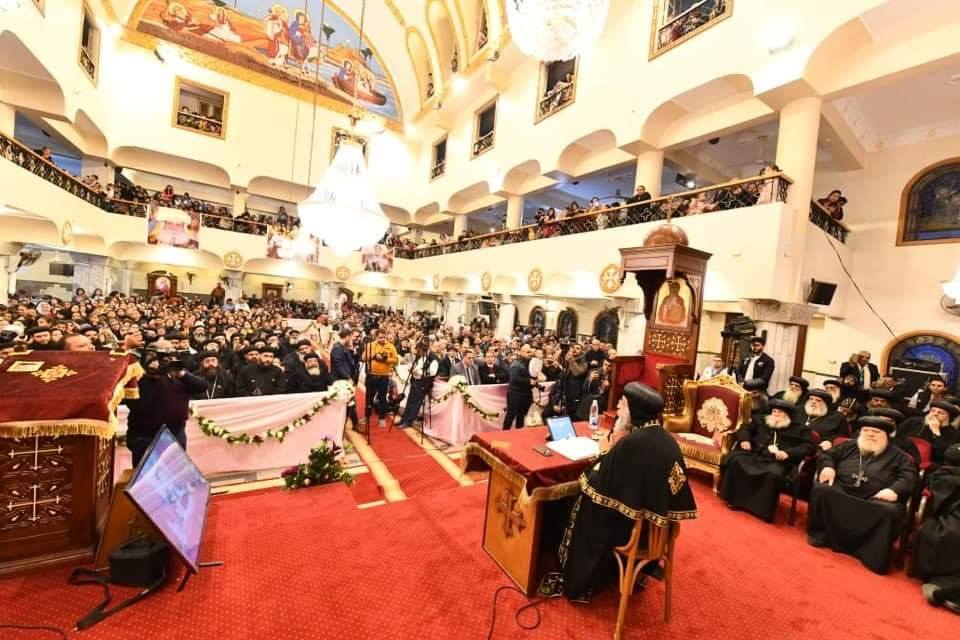 The next visit of Pope Tawadros was to Tema where he was welcomed by the Bishop Anba Ishaq, and a large congregation that received him with music, drums, cheers, and ululations. The Pope, accompanied by 16 bishops, consecrated three altars at Abu-Fam Cathedral, one dedicated to the martyr Muhrati; the second to St Sheounda the Archimandrite, and the third to the Fathers Abraham, Isaac, and Jacob. 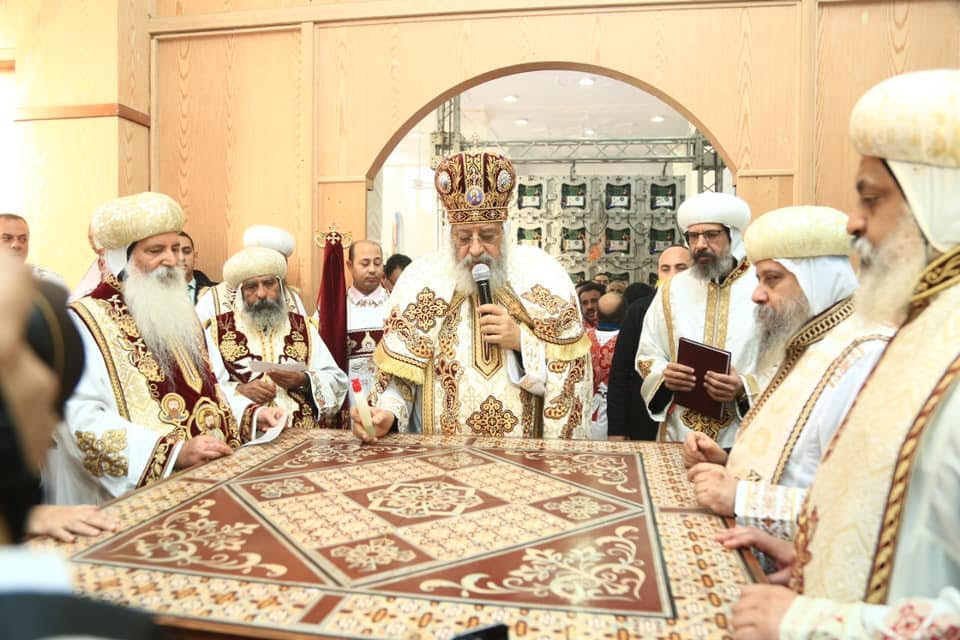 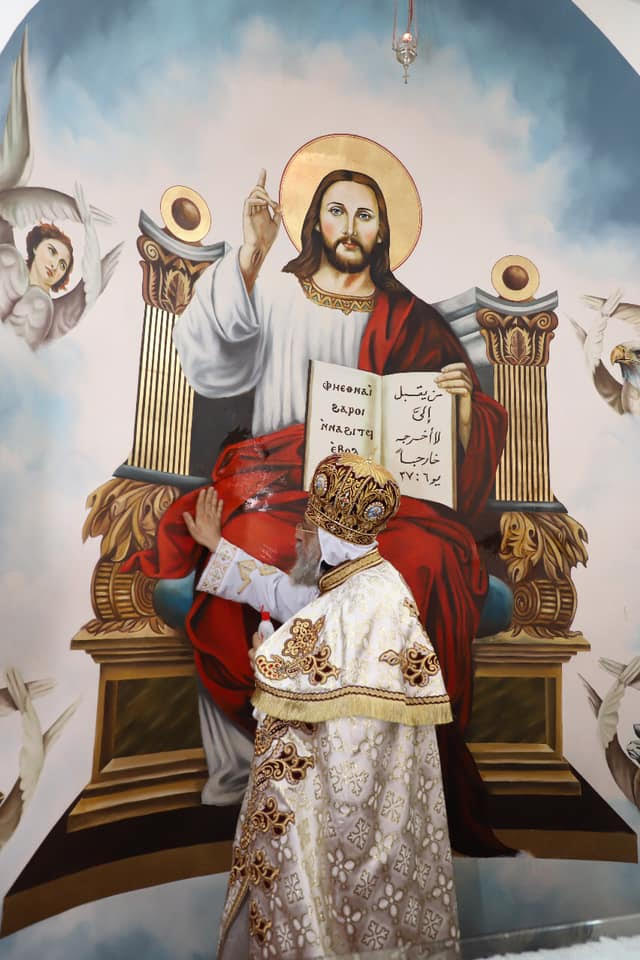 Tuesday evening, the Pope arrived to the monastery of the Holy Virgin in Akhmim, the church of which dates back to the 17th century. On hand to receive him was the Abbot Anba Matta’os and the monks who ushered him in with palm fronds and songs of praise. Anba Matta’os guided the Pope through a tour of the monastery, explaining its history and the renovation work taking place there. 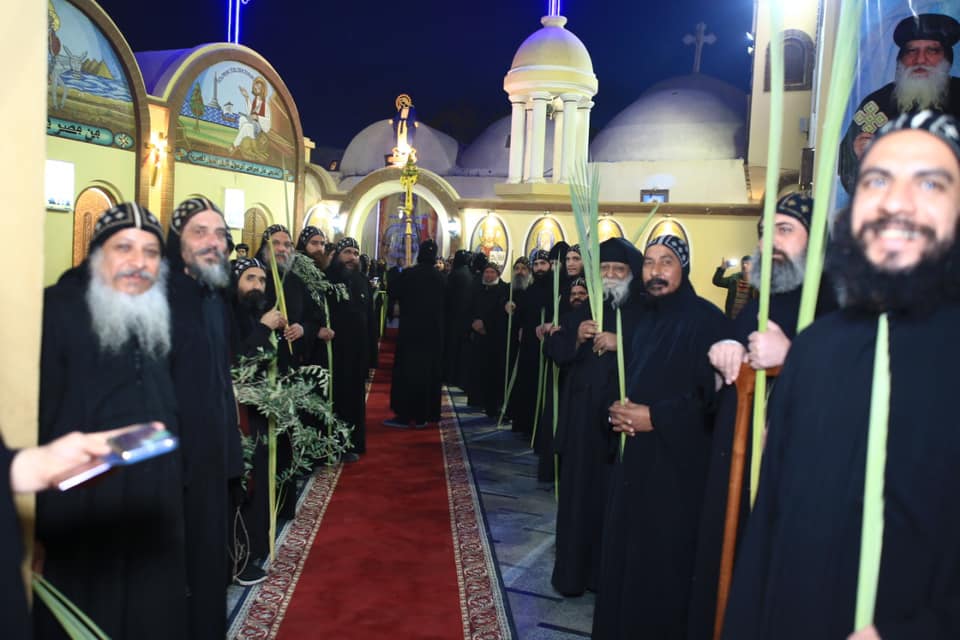 The Pope held a meeting with the monk assembly, which was also attended by the monks of the Sohag monasteries of Anba Thomas and Archangel Mikhail.

As the visit concluded, Anba Matta’os gifted the Pope with an icon of the Holy Family painted by one of the monks. 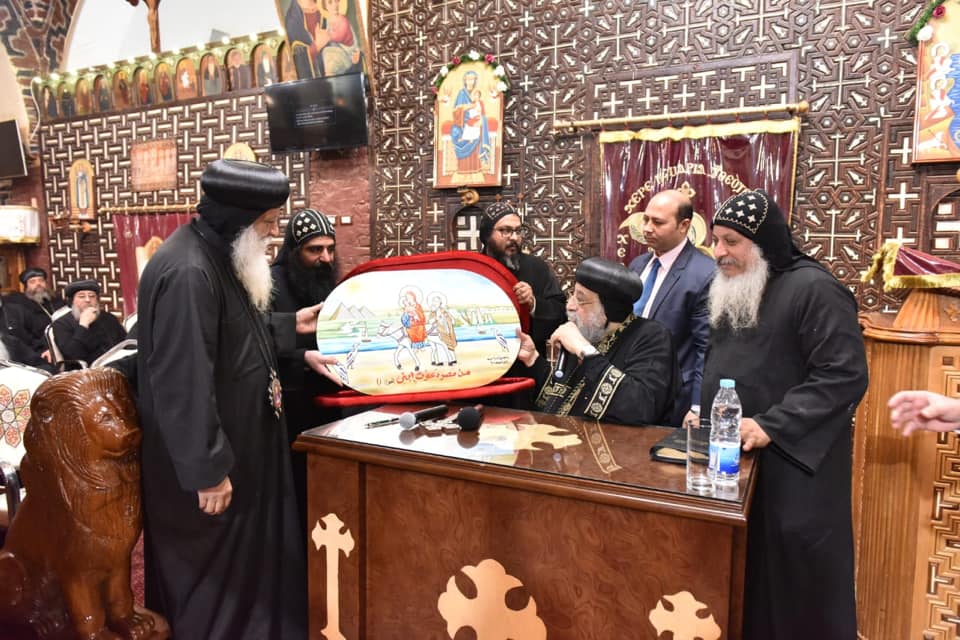 Early Wednesday morning, Pope Tawadros began his visit to Tahta where a huge congregation awaited him at the church of St Shenouda the Archimandrite which he was set to consecrate. Anba Ishaia’, Bishop of Tahta and Juhaina warmly welcomed him, and they joined the chanting deacon procession which led them into the church to the applause and ululations of the jubilant congregation. 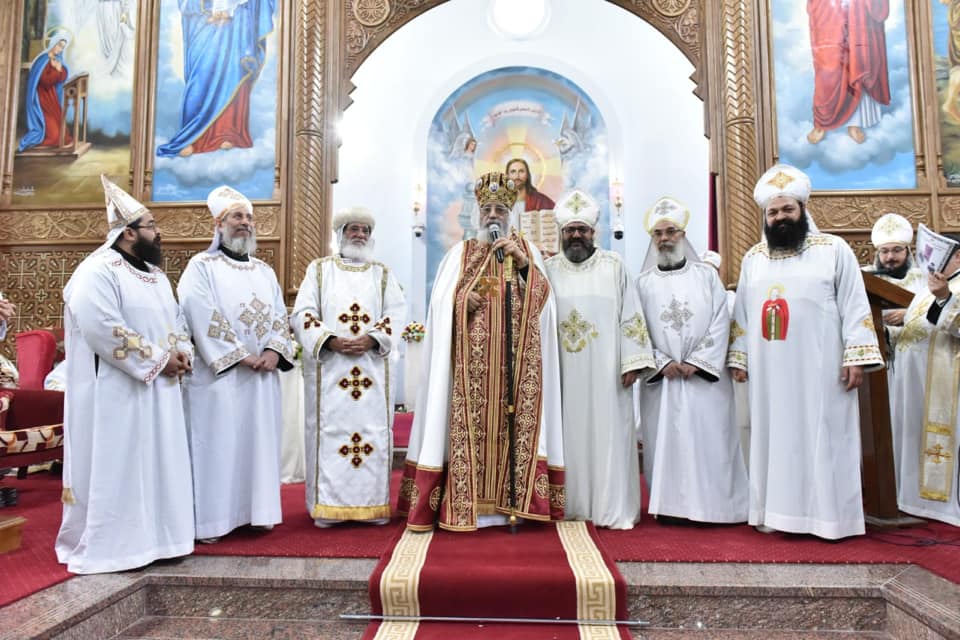 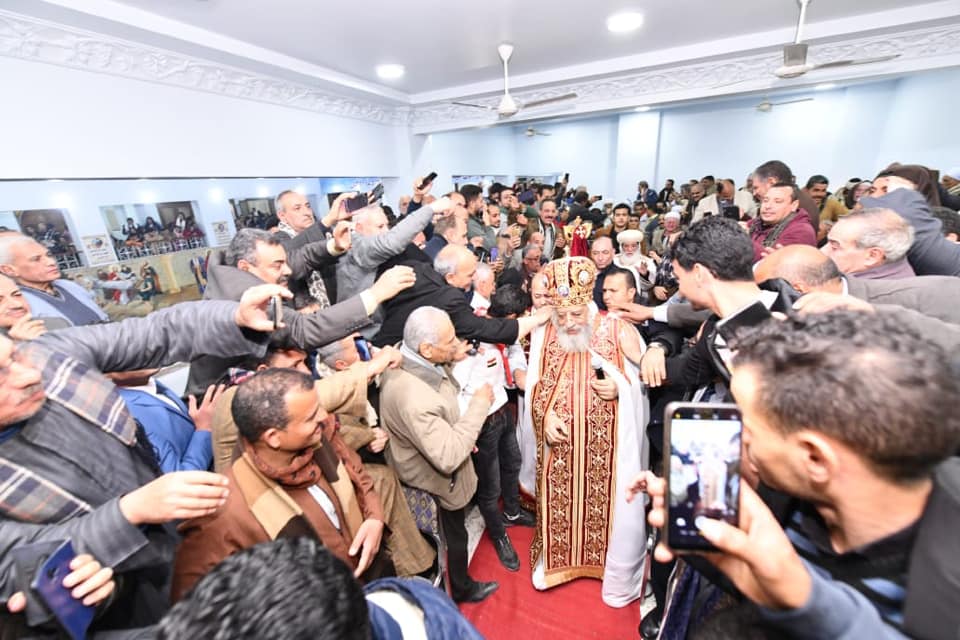